The Icelandic landscape is undeniably stunning: Steel gray mountains covered in moss jut out from emerald green plains populated by wild horses. The beauty is also rough, harsh, and rocky — not exactly land that’s amenable to farming. Long, frigid winters make growing most crops, other than tubers like turnips and potatoes, difficult. Wheat is especially tricky to cultivate. So Icelandic people had to come up with a way to stretch the little flour they did have — whether it was purchased from traders in neighboring Denmark or cultivated at home. The result of their industriousness is laufabrauð, known as leaf bread or snowflake bread in English.

Laufabrauð likely originated in the north of Iceland near the Westfjords region. The first written recordings of these thin, round sheets of bread appeared in 1736 when it’s referred to as “candy” for Icelanders. It’s likely much older than that, but there’s no written mention of laufabrauð until the 18th century. It was around this time that Icelandic people were finally able to acquire affordable tools for grinding their own grains into flour for bread. Still, it took a lot of work, and grain remained a scarce resource. In order to make it last through tough winters, home bakers rolled the dough out into thin circles — literally making it stretch as far as possible.

Flour isn’t a commodity that needs to be hoarded in Iceland anymore, but you can find families all over Iceland who make leaf bread around Christmas.

Many families gather the first sunday of Advent — November 29 — to prepare large batches of laufabrauð, which are then stored in cookie tins until they’re eaten on Christmas. According to Saveur, some people joke that the only time men help out in the kitchen is when it comes time to decorate the leaf bread.

The intricate patterns, which were originally designed to highlight how valued bread was among poor families who could only afford to prepare it for special occasions, are created using a tool called a laufabrauðsjárn, or leaf bread iron. Once the bread has been rolled out paper thin — some say it needs to be thin enough “that you can read a newspaper through it” — and the decorations have been added, laufabrauð is deep fried until it’s crispy. The moniker leaf bread might not actually refer to the pattern on the bread but the fact that it’s rolled out until it resembles the samel crispy thinness of a leaf. In the modern era, some families use sunflower or vegetable oil. However, traditional leaf bread is fried in lamb fat. Once it’s finished frying in the oil, it’s flattened on a wooden boar called a laufabraudshlemmur. At Christmas dinner, the bread is served alongside a main course of smoked lamb, or hangikjöt — a traditional Christmas Icelandic dinner. 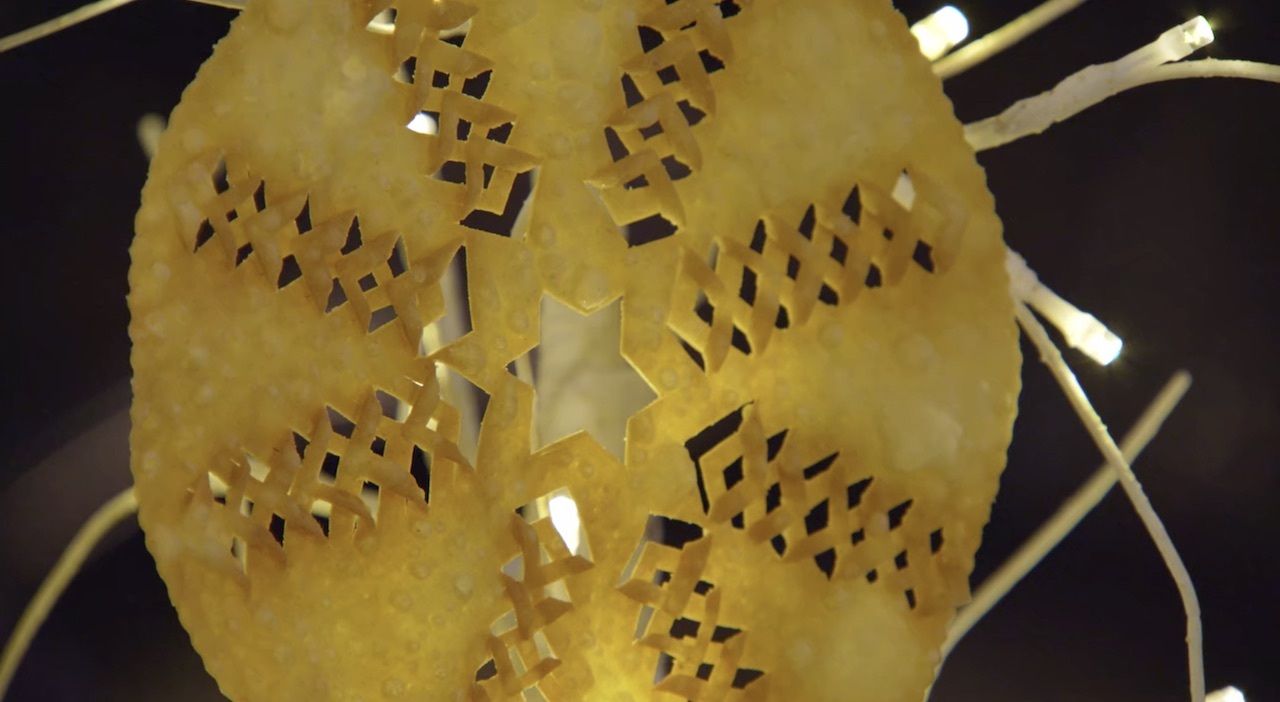 Icelandic food enthusiast Esther Martin-Ullrich writes on her blog Why’d You Eat That that laufabrauð recipes are passed down from mother to daughter, but ingredients follow a similar pattern: Leaf bread is often seasoned with caraway, one of the most beloved spices in Icelandic cooking (Brennivín, Iceland’s signature schnapps drink, is also flavored with caraway). One other fascinating ingredient traditionally used in the preparation of leaf bread is called deer antler salt, which is exactly what it sounds like: salt ground from the antlers of deer. It was used as a leavening agent for the bread (baking soda is obviously more common today). It can be found in Sweden, too, where it’s used to help a Swedish flatbread called hönökaka rise.

Leaf bread isn’t a niche Christmas activity either, although it takes some skill to create. It’s famous enough throughout Europe that the Great British Bake Off used leaf bread as a technical challenge during its 2019 Christmas special. This beautiful style of bread isn’t just good — it’s also art, and it reminds Icelandic families of a time when it was possible to treasure the holidays even in the leanest times.

Food + DrinkHot Dr Pepper was once America’s holiday drink of choice
Tagged
Food + Drink Holidays Iceland
What did you think of this story?
Meh
Good
Awesome

Drone video shows Icelandic volcano as it starts to erupt

Vaccinated travelers can fly to Iceland this summer for just $339

8 fun and folksy experiences to immerse yourself in Icelandic culture