The best way to explore Iceland has always been on four wheels (or two, if you really want a challenge), as the land of fire and ice offers some iconic driving routes. The Golden Circle, a 140-mile loop, is the most well-known, thanks to its proximity to the capital Reykjavik and its big-hitting sights. Those with more time often opt to circle the island on Ring Road 1, which stretches nearly 830 miles.

But if you want to get off the beaten track and discover a side to the country that few visitors see, then you’ll want to try a new Iceland drive: Vestfjarðaleiðin (Vest-fyar-tha-lay-thin), or the Westfjords Way. It is Iceland’s newest auto route, located in the northwest of the country.

Until recently, the Westfjords remote location and challenging driving conditions have meant that only seven percent of travelers to Iceland chose to visit here. The arrival of the new 590-mile Westfjords Way looks to change this by making the region more accessible and easier to navigate. Here’s how to get the most of this new Iceland drive, including what to do and see along the way.

The basics on driving to the Westfjords 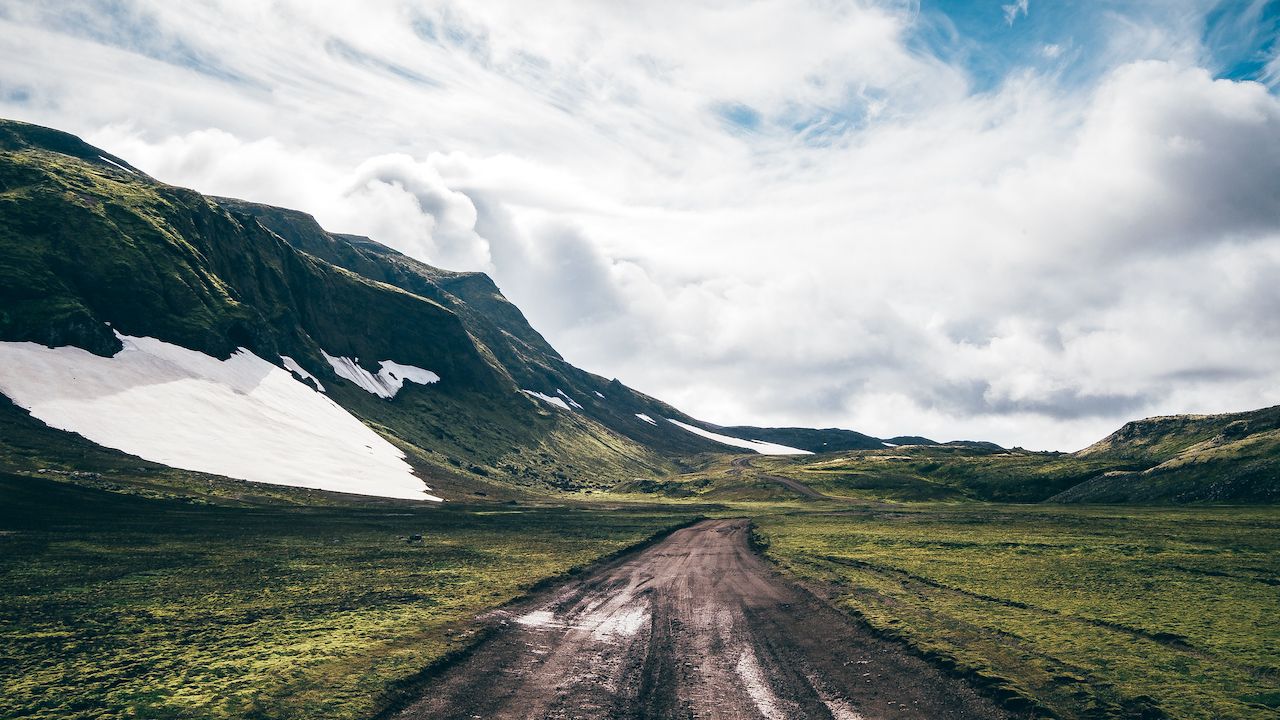 The Westfjords is the northwestern peninsula that juts out toward Greenland. Geologically, it’s the oldest corner of Iceland, home to some of the most spellbinding scenery and edge-of-your-seat adventures. The new ring road, comprised of Roads 60 and 61, diverts north from the primary Route 1 about 120 miles north of Reykjavik and makes the Westfjords accessible for roughly nine months of the year. Snowfall can start in November and last until early March, closing off many of the roads in the area. There are plans to complete a new mountain road in 2023, which will open the region up year-round. In the meantime, plan your trip for spring or summer.

Many of the roads are unpaved in the Westfjords, so make sure you are comfortable driving in these conditions and that you have insurance to cover any damage caused by gravel to your rental car. Also, be aware that, like many an Iceland drive, distances between towns can be long — often a couple hours between those with services — so stock up on gas and food whenever you can.

An alternative would be to go with a guide; Hidden Iceland is a local company that offers small, personalized tours including trips to the Westfjords. If heading out on your own, allow between two and four days to explore the area. 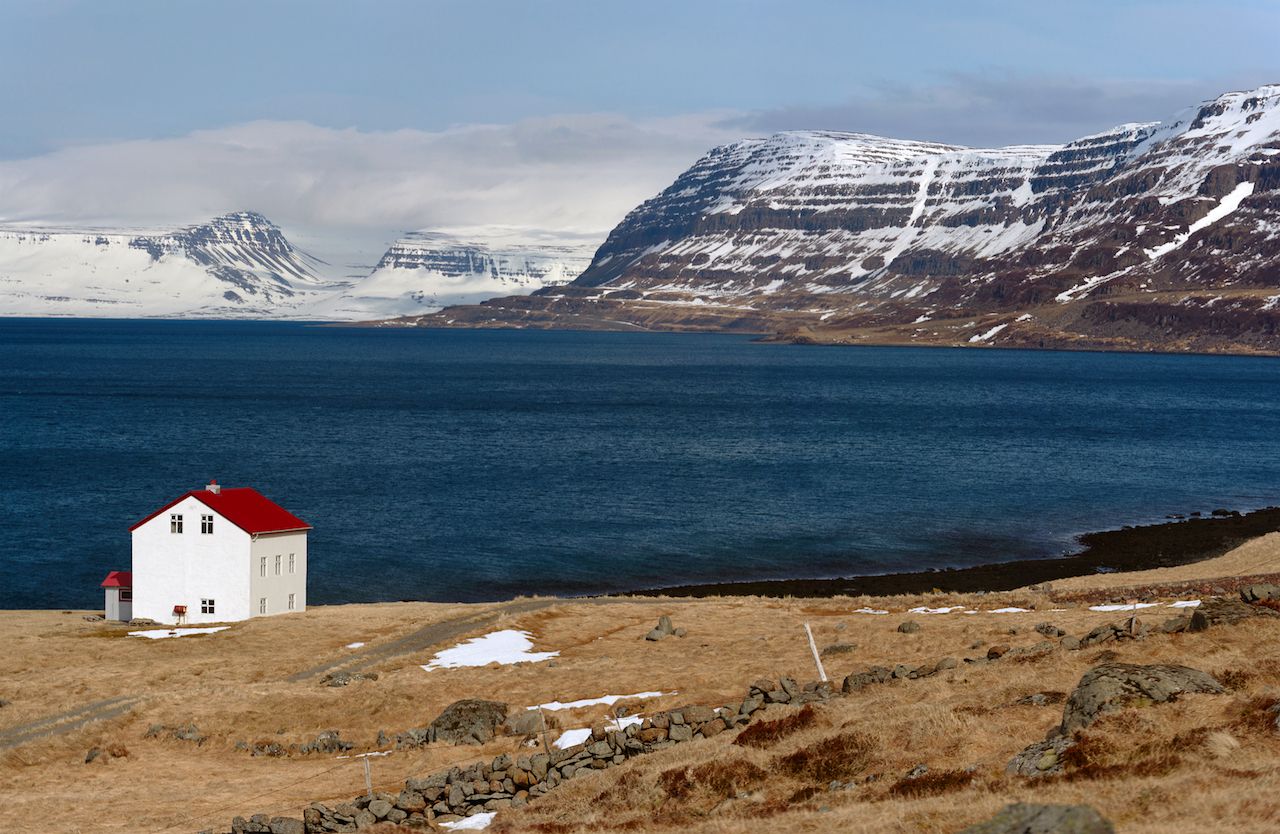 It takes roughly five hours to drive from Reykjavik to Gilsfjörður, the narrow fjord that separates the Westfjords from the mainland. Note that drive times provided on mapping services like Google Maps often vastly underestimate the amount of time it will actually take you to drive on these roads. From the capital, head out along Route 1 before branching off onto Road 60. Although traffic on the mainland is minimal, once you cross over into the Westfjords you’ll have the roads all to yourself.

The other thing you’ll notice is the scenery. Gone are the active volcanoes and lava fields of the “younger” mainland — to be replaced by sweeping green pastures and flat-topped mountains. Follow the Westfjords Way as it winds its way around the slate blue fjord waters and you will arrive at Hotel Heydalur, a guest house tucked away in a glacier scarred valley of the same name. If you have time, then this is a good place to base yourself for a couple of days. The hotel offers guided horseback tours along black sand beaches as well as sea kayaking and hiking.

Discover Isafjordur and the tiny island of Vigur 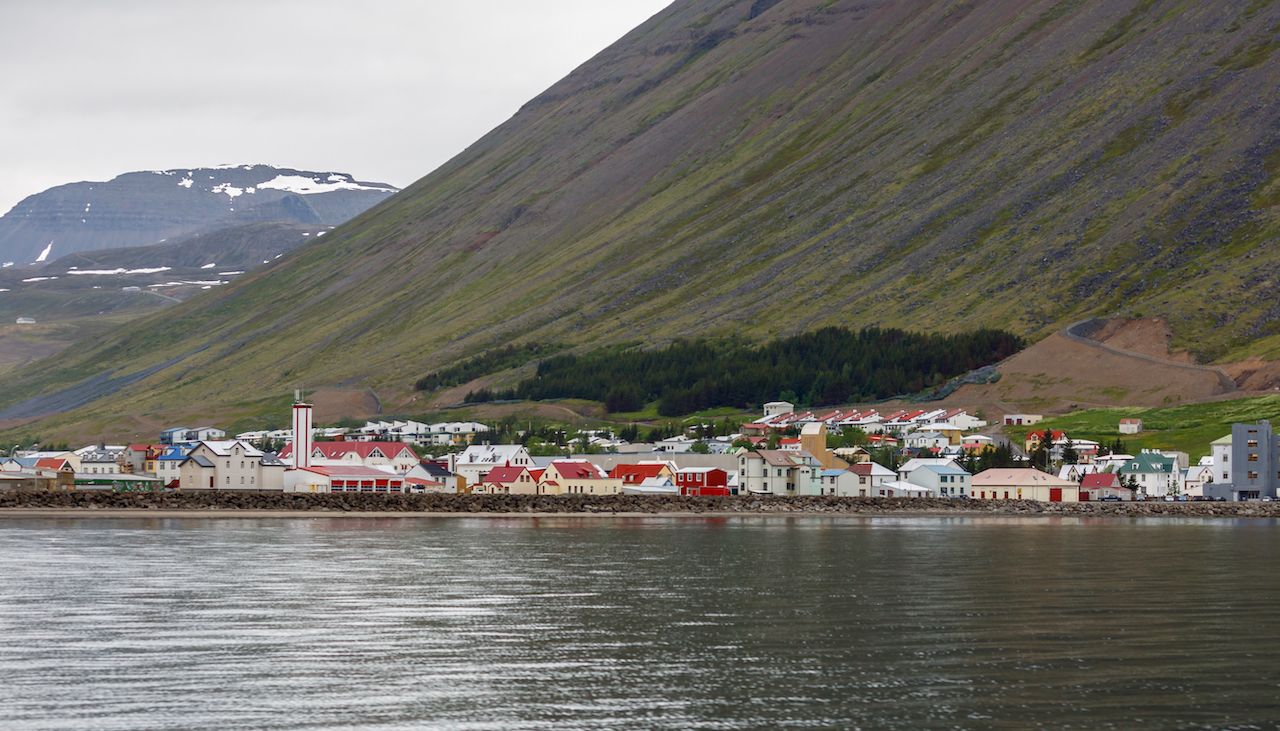 Not only is Isafjordur the largest town in the Westfjords; it’s also where you’ll discover some of the region’s best adventure activities. If you can get here during winter then the town’s ski resort is home to some serious backcountry skiing. In warmer months activities include snorkeling or diving in the cold but crystal clear fjord waters, paragliding, sea angling, kayaking, and hiking.

In town you can also visit the Westfjords Heritage Museum. It presents an interesting look at the area and its fishing history. Or grab a hearty pint at the three-year-old Dokkan Brugghús, which means Dock Brewery.

Make time for a boat trip with West Tours and spend a day visiting the island of Vigur. One of just three islands off the coast of Isafjordur, this tiny island is just 1.2 miles long and is inhabited by just one family. They live here year-round, accompanied in summer months by thousands of puffins and Eider ducks. The family makes their living collecting down from ducks and sending it off to Germany and Asia where it’s made into cozy — but costly — bedding and winter coats.

If your timing means that you miss the birds, Harpa seals visit throughout the year. They can usually be spotted lounging on the rocks. Two double rooms are available for overnight stays (inquire via the tour company for contact information) or you can camp.

Learn the legend of the Dynjandi Waterfall 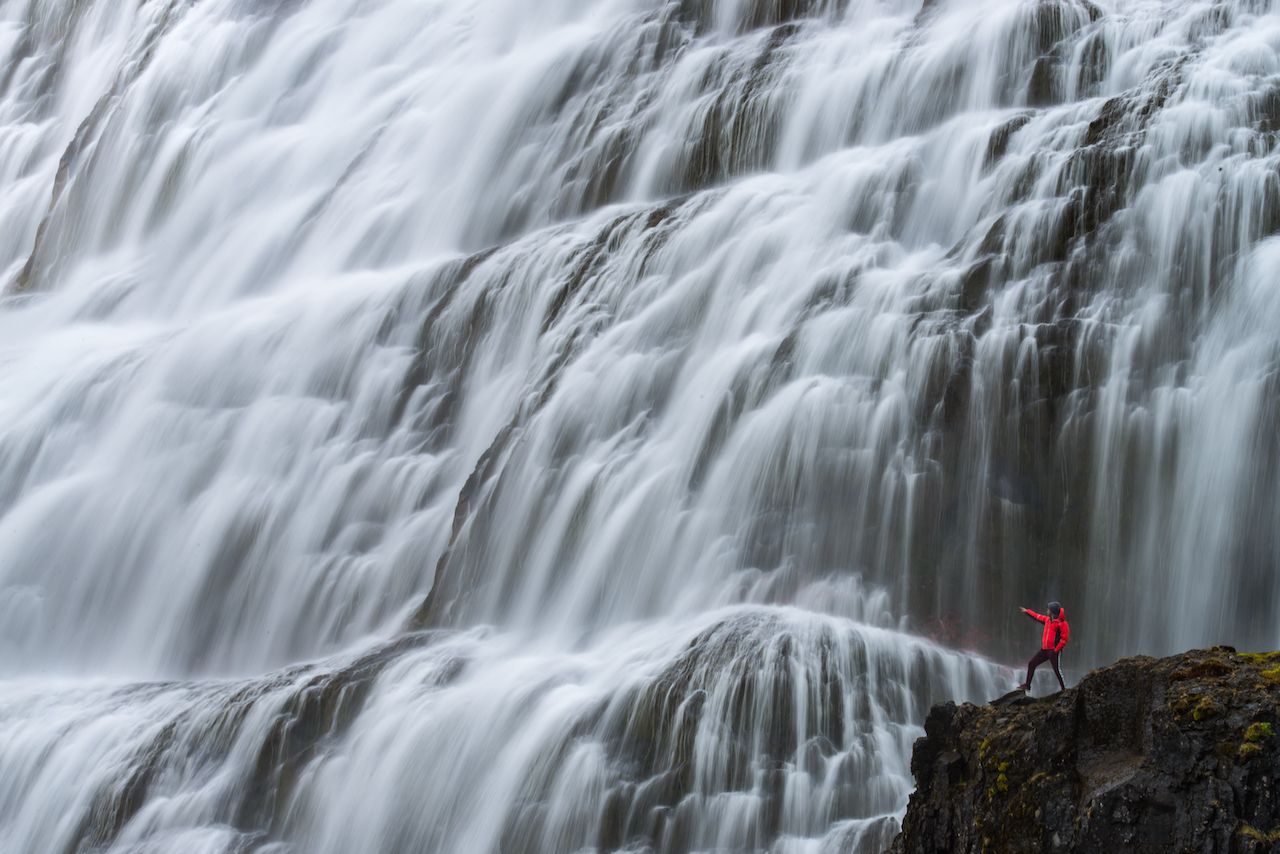 You will see lots of waterfalls on any Iceland drive — but you will only see one waterfall like this. Reaching a staggering 330 feet in height, the Dynjandi Waterfall, located on the shore of Arnarfjörður, is one of the tallest and most spectacular in a country full of mind-blowing falls. Local legend says that the waterfall is the bridal veil of a spurned giantess and the roar of the falls the sound of her crying.

Dynjandi means thunderous in Icelandic, and the falls are often called the “Bridal Falls” in English. However, this is not just one waterfall but a series of waterfalls, each with its own Icelandic name. Trails lead up the mountainside to various viewing points where you can see the mighty falls close-up.

Walk along the Látrabjarg sea cliffs 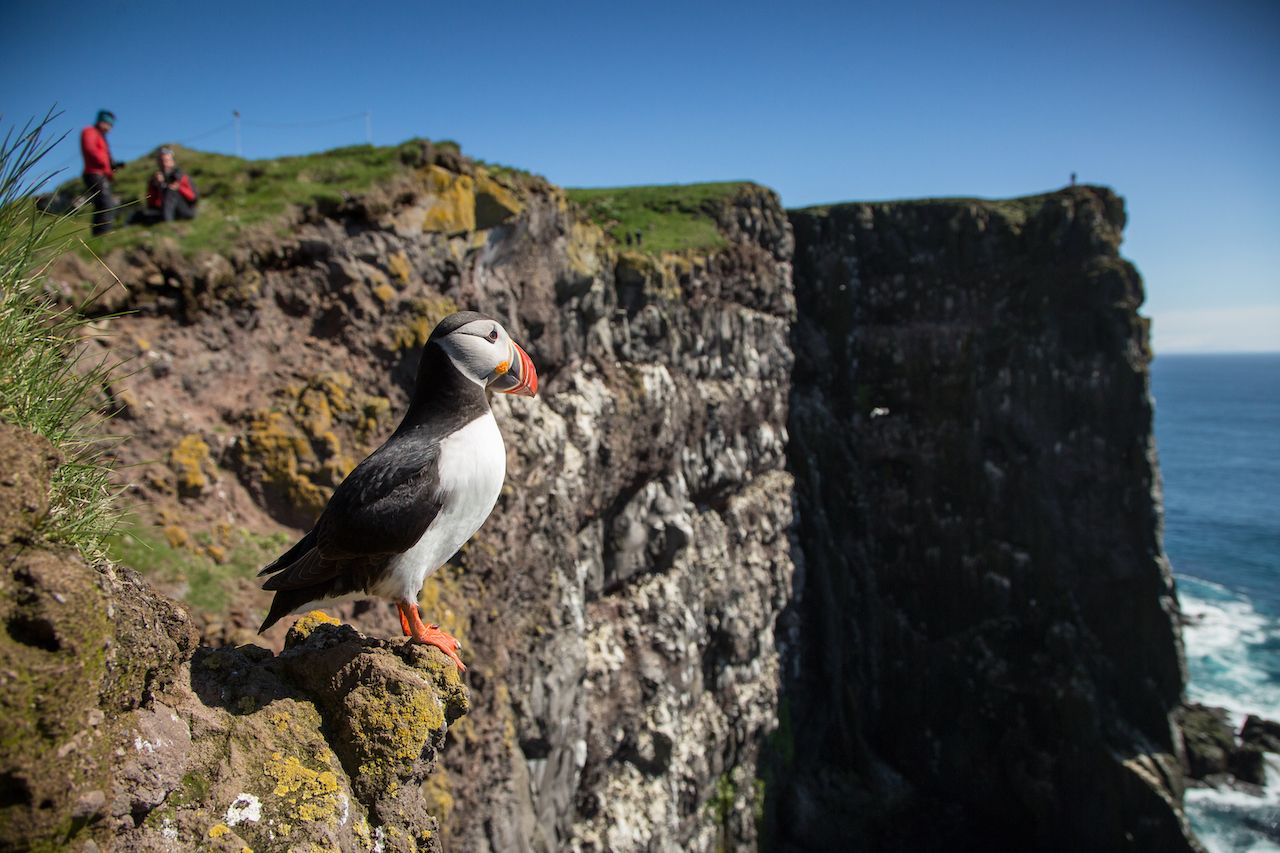 The Westfjords are home to another one of Iceland’s most dramatic sights, the Látrabjarg Sea Cliffs. These precipitous cliffs are the westernmost point in Europe and they rise dramatically from the ocean, reaching almost 1,500 feet in places. During summer months the cliff faces are home to tens of thousands of birds including razorbills, fulmars, puffins, arctic terns, and kittiwakes. If you want to see the birdlife, plan to visit between May and August. The cliffs stretch for nearly nine miles, offering plenty of walking opportunities. Just be sure to stay away from the fragile edge.

The closest town to the cliffs is Patreksfjörður. The road from here to the cliffs passes the Gardar BA 64 shipwreck, an old whaling boat grounded on the sand. Launched in 1912, this is the oldest steel ship to remain in Iceland. She’s rusty and slowly falling apart these days but well worth stopping for a photo op. If you have time you can also visit the red sand beach of Raudisandur. 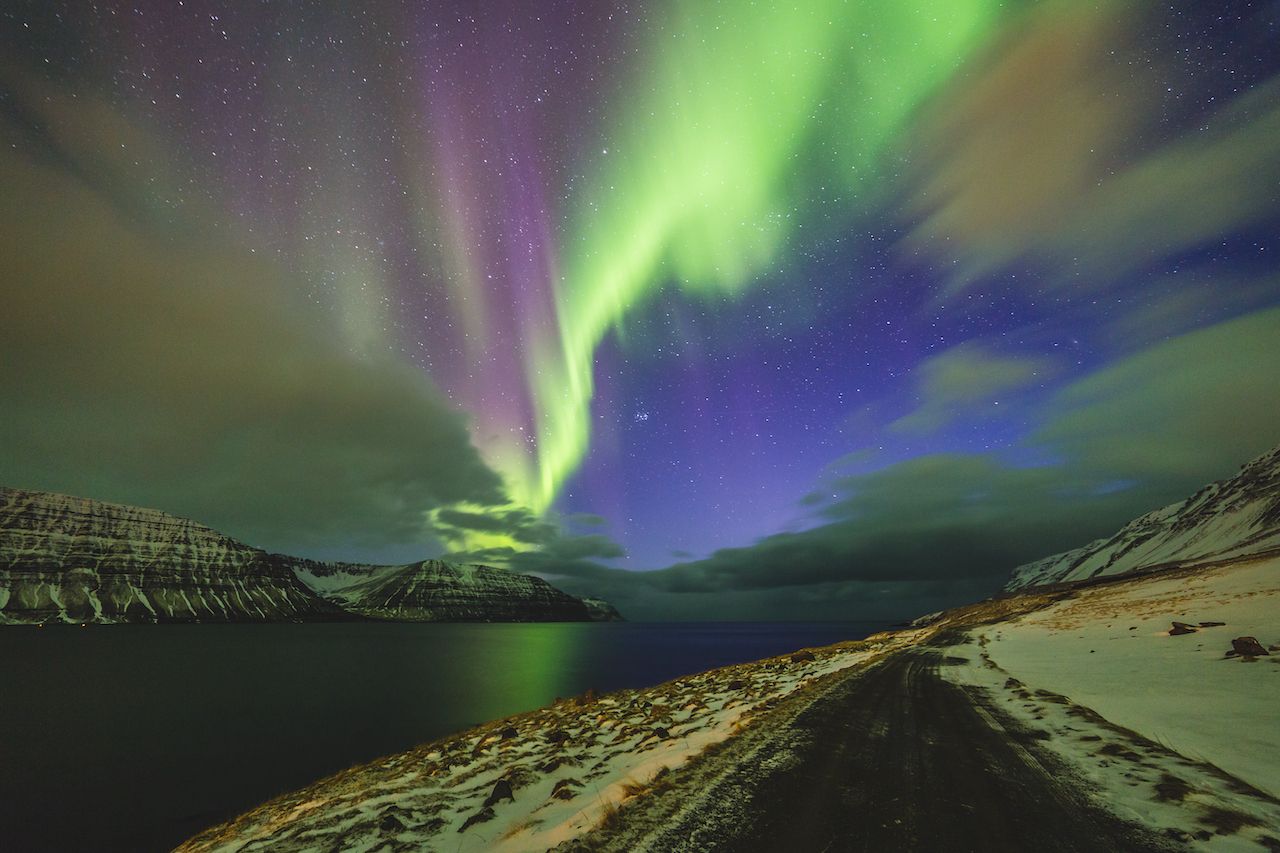 Photo: This Must Be The Place/Shutterstock

Thousands of visitors travel to Iceland every year hoping to catch a glimpse of the mysterious aurora borealis, and one of the best places to see them is the Westfjords. The region’s isolated position and small population mean that you stand a good chance of spying the colorful shifting shapes of the Northern Lights and won’t be part of a massive tour group in order to do so. You can spot this magical phenomenon from almost anywhere but some places to try include Ísafjörður, where minimal light pollution promises positive sightings.

From some places, you have to point north, but in Iceland you can pretty much spot them overhead, when they appear. At the Dynjandi Waterfall, the swirling colors are captured by the mist from the waterfall creating an additional light show. The Latrabjarg Cliffs also make for an incredible viewing platform. The best time to see the lights is between September and March. Make sure you download an aurora app or forecast and check it regularly. Much like the Westfjords themselves, the northern lights are wonderfully unpredictable.