Antoni Gaudí is the emblematic architect of Barcelona. The visionary creator enriched the aesthetics of the city in the late 1800s and early 1900s with his bright colors, organic shapes, undulating surfaces, and unique use of patterns. However, the streets of Barcelona display a heritage that expands far before and beyond the life of Gaudí. The Romans founded Barcelona (then Barcino) in the first century BC, and every century since has left its mark upon the city. If you’re keen to see the most beautiful buildings in the city but only have a limited amount of time and money, follow our guide for a crash course and an easy tour of the most iconic Barcelona architecture. It’ll only cost you the price of a metro ticket and decent walking shoes. 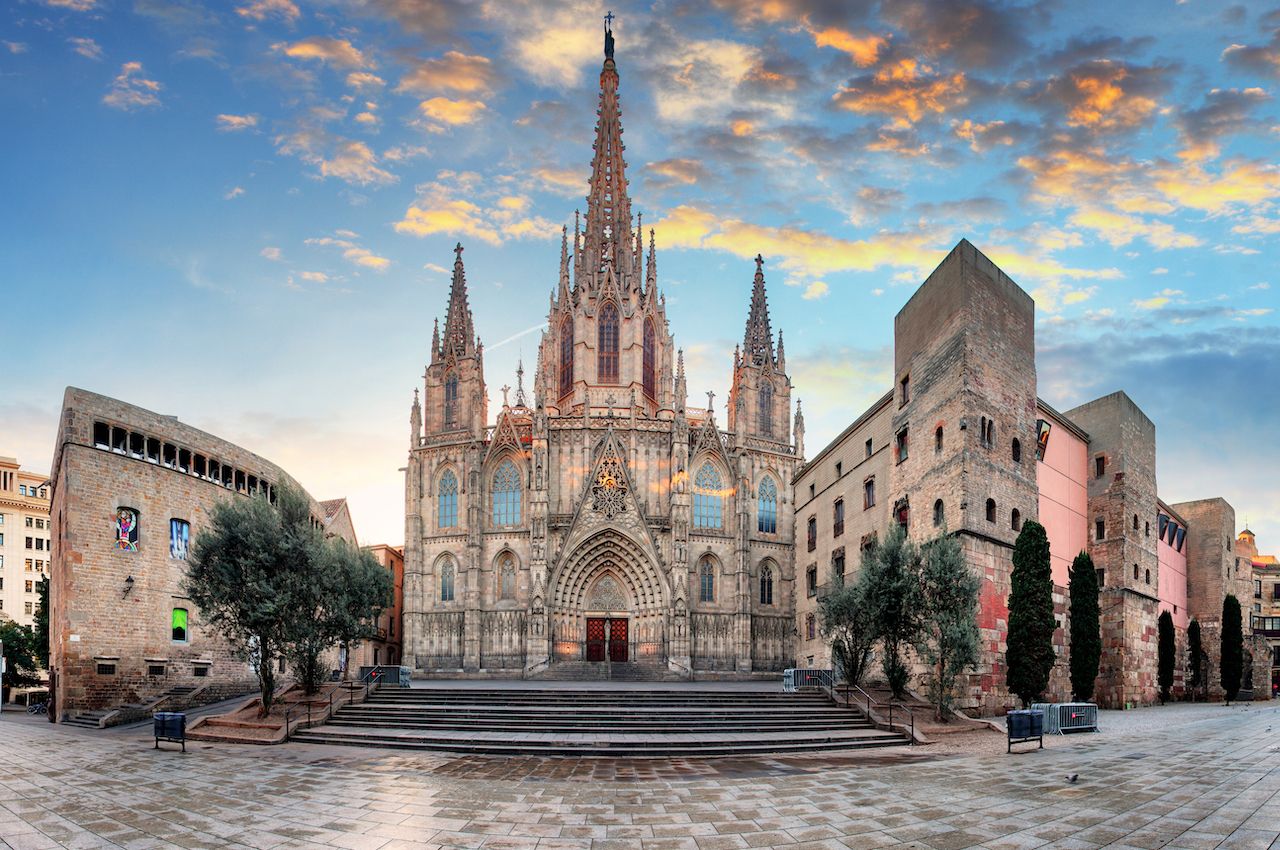 Reach the staggering Catedral de Barcelona by getting off at the Jaume I stop of the L4 (yellow) line. Walk through the Plaça de l’Angel and follow the Baixada de la Llibreteria, then turn right onto Carrer de la Freneria and walk northwest until you hit the back of the cathedral. Just continue onto Carrer dels Comtes to reach the front.

This gothic cathedral was built atop the foundations of an early Christian church that dates back to the fourth century. It took approximately 150 years to build, beginning in 1298. It is notable for its impressive size, ornate facade, gargoyles, and carved pinnacles. If you visit on a weekday between 8:30 AM and 12:30 PM or 5:45 PM and 7:30 PM, you can get in for free. If you visit within the second time slot, be sure to enter using the door to the right of the main facade. If you visit outside of these timeframes, there is a seven euro ( $7.80) fee for tourists.

After you check out the cathedral, take a stroll in the surrounding Barri Gòtic (Gothic Quarter) and immerse yourself in the medieval and neo-gothic structures. Notable streets include Carrer del Cardenal Casañas (which contains the Plaça del Pi) and Carrer dels Escudellers (which includes the Plaça George Orwell). 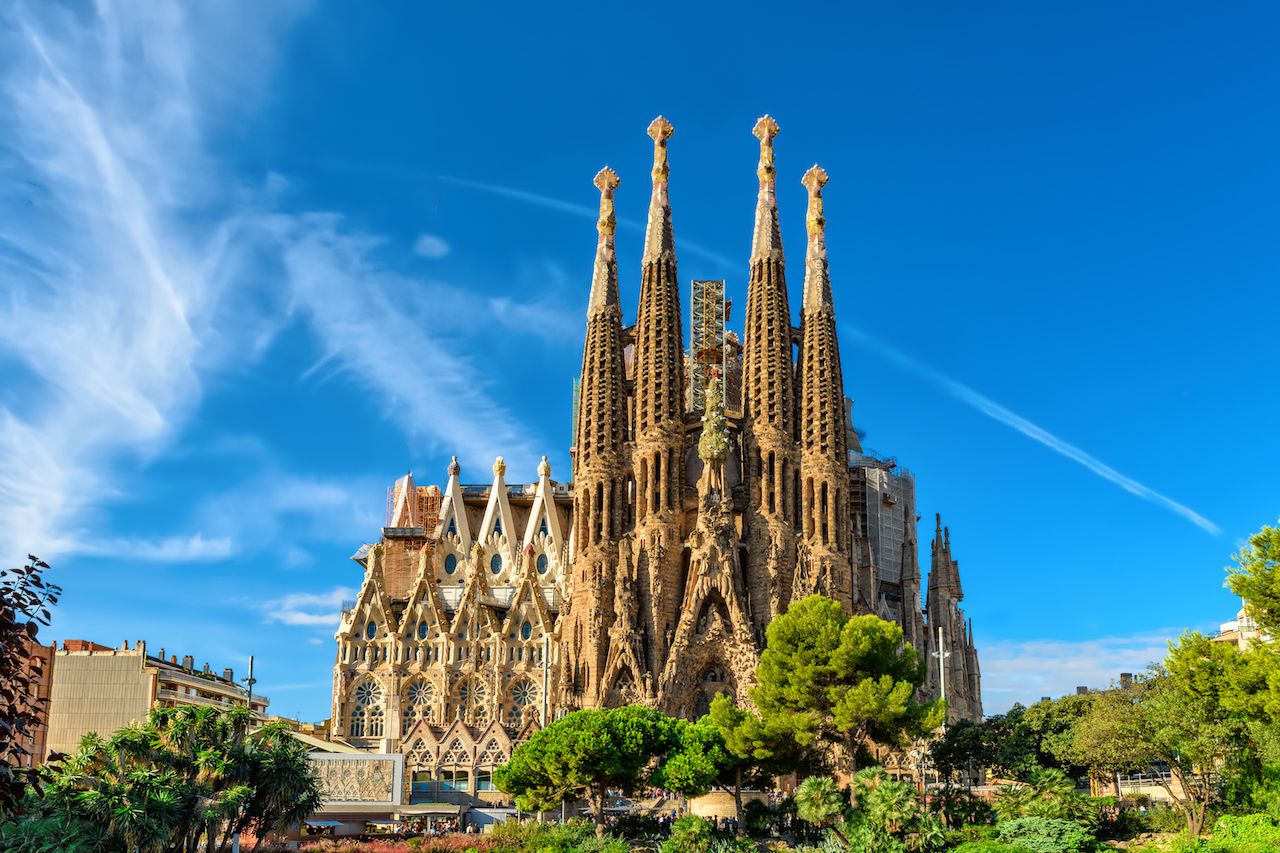 Find this iconic structure and incredible Gaudí invention by taking either the L2 (purple) or L5 (blue) metro lines to the Sagrada Família stop. La Sagrada Família is a large, unfinished basilica — an ambitious project that initially began in 1882. Certain parts of the church that were executed under Gaudí’s designs are designated as an official UNESCO World Heritage site. The columns in the frontal facade are angled in such a manner that they seem alive, as they stretch towards the pinnacles. The facade also contains figurative sculptures that depict Christian scenes in a modernist manner.

You need to pay 20 euros ($22.25) to enter La Sagrada Família, but the basilica is most impressive when viewed from the outside. Grab a snack from one of the nearby cafes on Carrer de Mallorca, sit on a bench in Plaça de la Sagrada Família, and take in the view. However, if you want to visit the church for religious purposes, know that there is a public mass every Sunday at 9:00 AM. 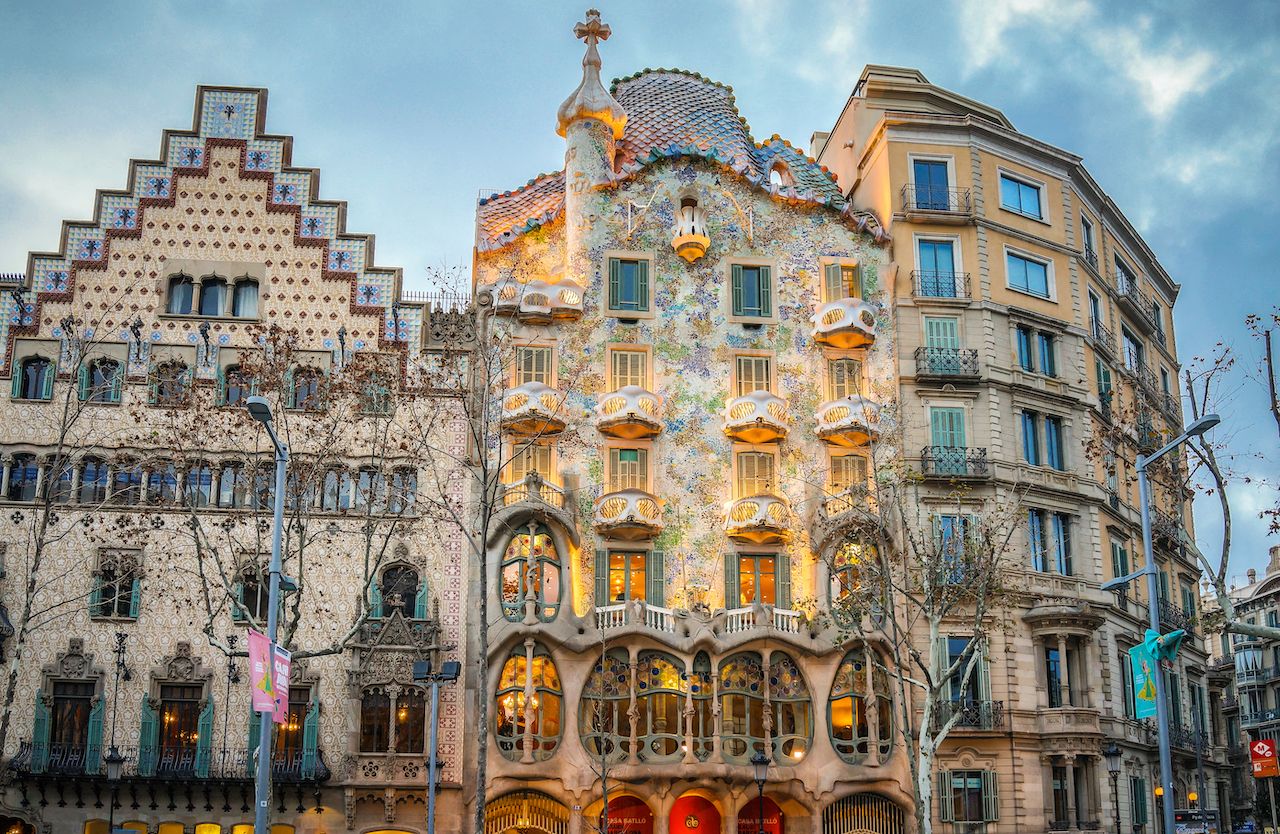 This beautiful building is directly across the street from the Passeig de Gracia metro stop, accessible via the L2 (purple), L3 (dark green), and L4 (yellow) lines. The Passeig de Gracia is also a train station, so you can see Casa Battló by exiting here if you enter Barcelona by rail. Prominent Catalan businessman Josep Battló bought this property on the Passeig de Gracia in 1903, and he selected Antoni Gaudí to remodel the building into an artistic, one-of-a-kind home for his family. This fantastical building is impossible to miss — its technicolor, curved roof looks like the skin of a dragon, and the frontal facade is coated in a shimmering pattern.

Today, Casa Battló is a museum with an entry fee of 25 euros ( about $27.90). If you have a deep interest in architecture, this is one item on the list that may be worth the price. However, for most visitors, Casa Battló is best when viewed in the full context of the Passeig de Gracia. The Passeig is an iconic boulevard, and Casa Battló is only one magical element that contributes to the total, grand experience of strolling along this street. 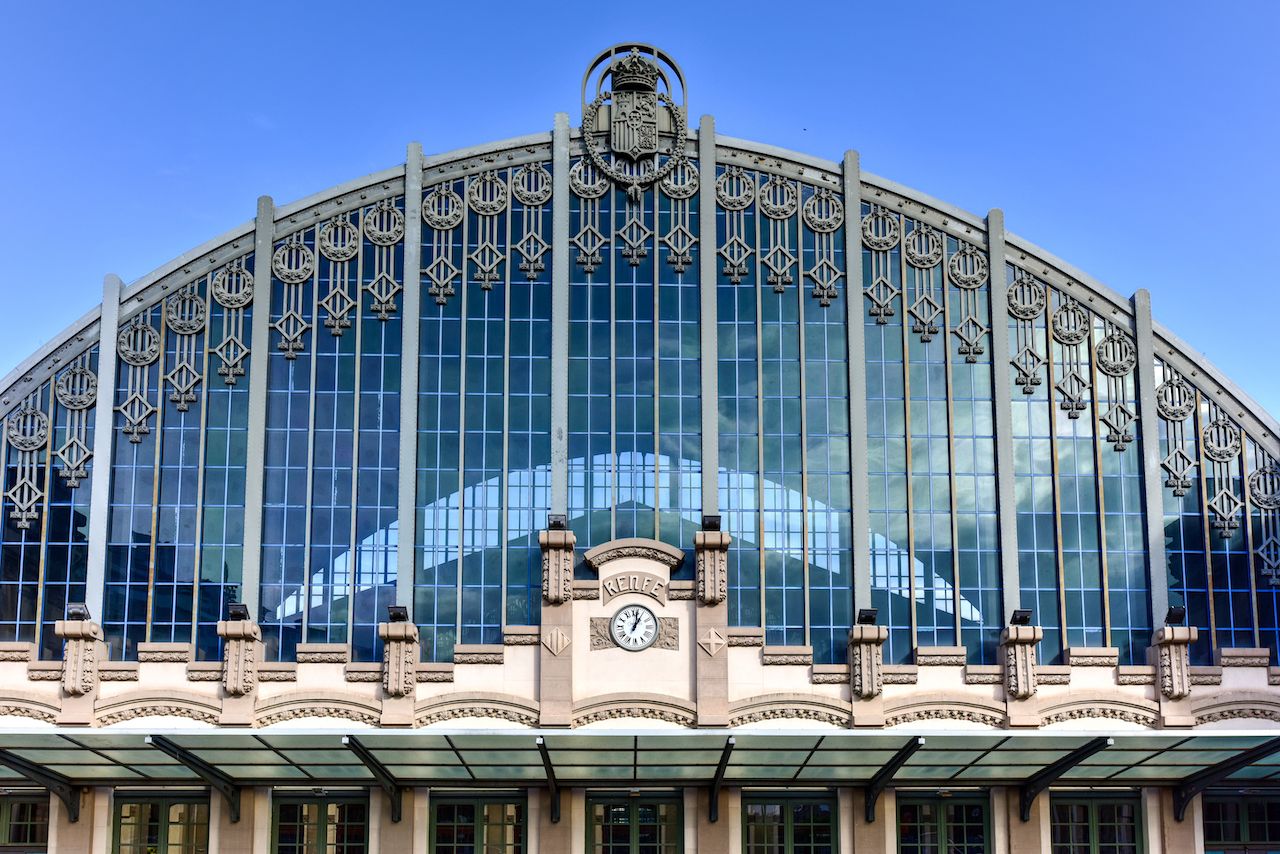 Find the Estación de França by taking the L4 (yellow) line to Barceloneta. This train station is the most beautiful in the city and has a perfect location between the waterfront and trendy El Born neighborhood. The Estación de França was built in 1926, and it officially opened for the 1929 World Fair. The 1929 World Fair is significant in Barcelona’s history, as it drove the construction and renovation of many buildings that gave Barcelona its international reputation as a tourist destination.

The Estación de França has an entryway that is designed with a mixture of modernist and Art Deco influences. It has a simple, restrained color scheme with marble, bronze, and crystal as the main materials. If you stand outside the front of the station, be sure to note the tiny owl statues, which are strategically placed to scare pigeons! 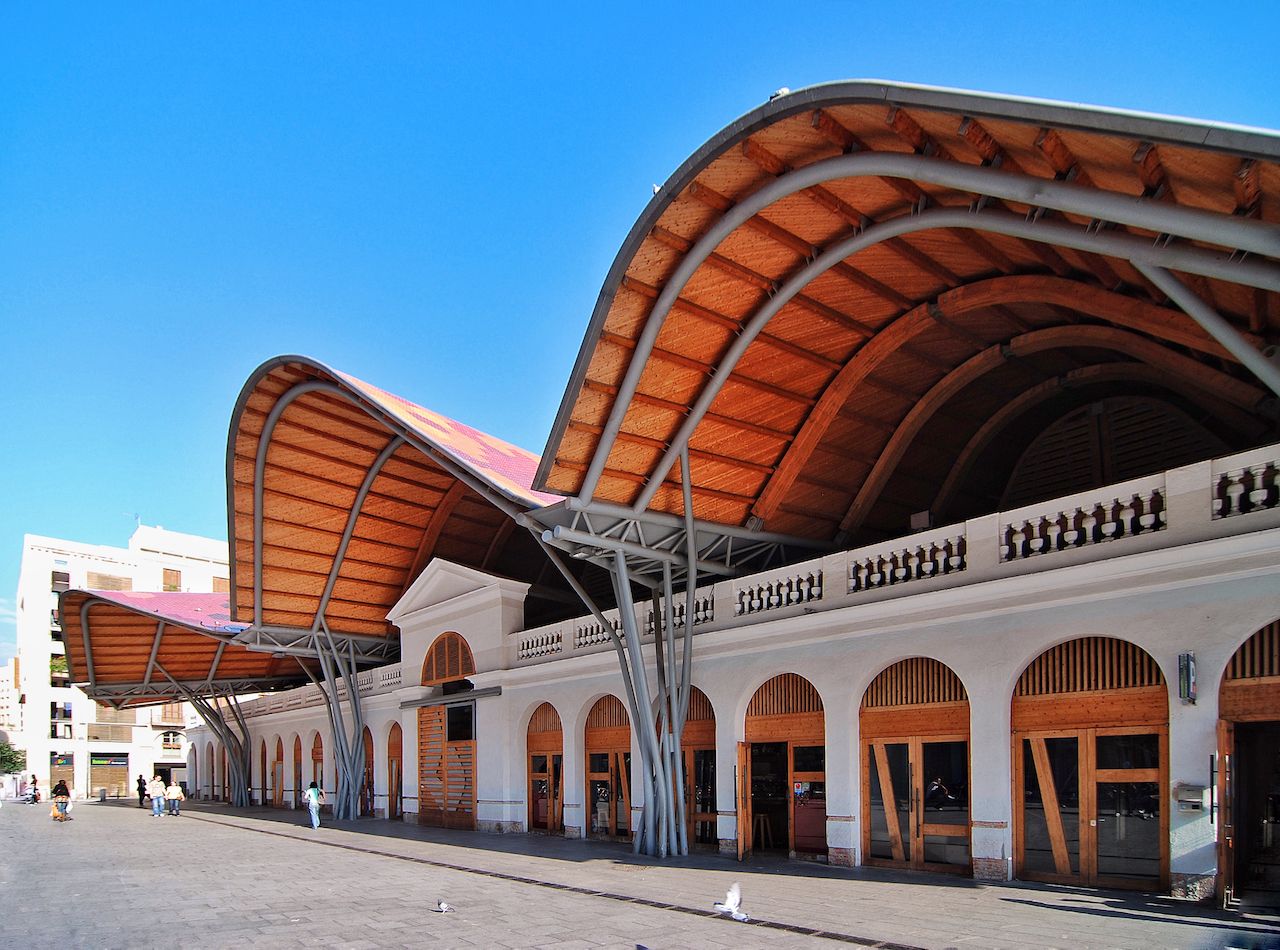 To reach the Santa Caterina Market, take the L4 (yellow) metro line to Jaume I. Walk northwest for on Via Laietana, then take a right at the Plaça d’Antoni Maura onto Avinguda de Francesc Cambó. You won’t be able to miss this building.

Santa Caterina Market was initially established in 1845 as the first covered food market in Barcelona. It was vitally important to the local population after the Spanish Civil War, as people traveled here from nearby towns for nourishment during food shortages. The facade of the market harkens to the original building, but during refurbishment in 2005, a vivid, curvy, mosaic roof was added to the top. You can stop by Monday, Wednesday, and Saturday from 7:30 AM to 3:30 PM or Tuesday, Thursday, and Friday from 7:30 AM to 8:30 PM. The market is free to enter, but you might want to bring some euros to sample some tapas or jamón. 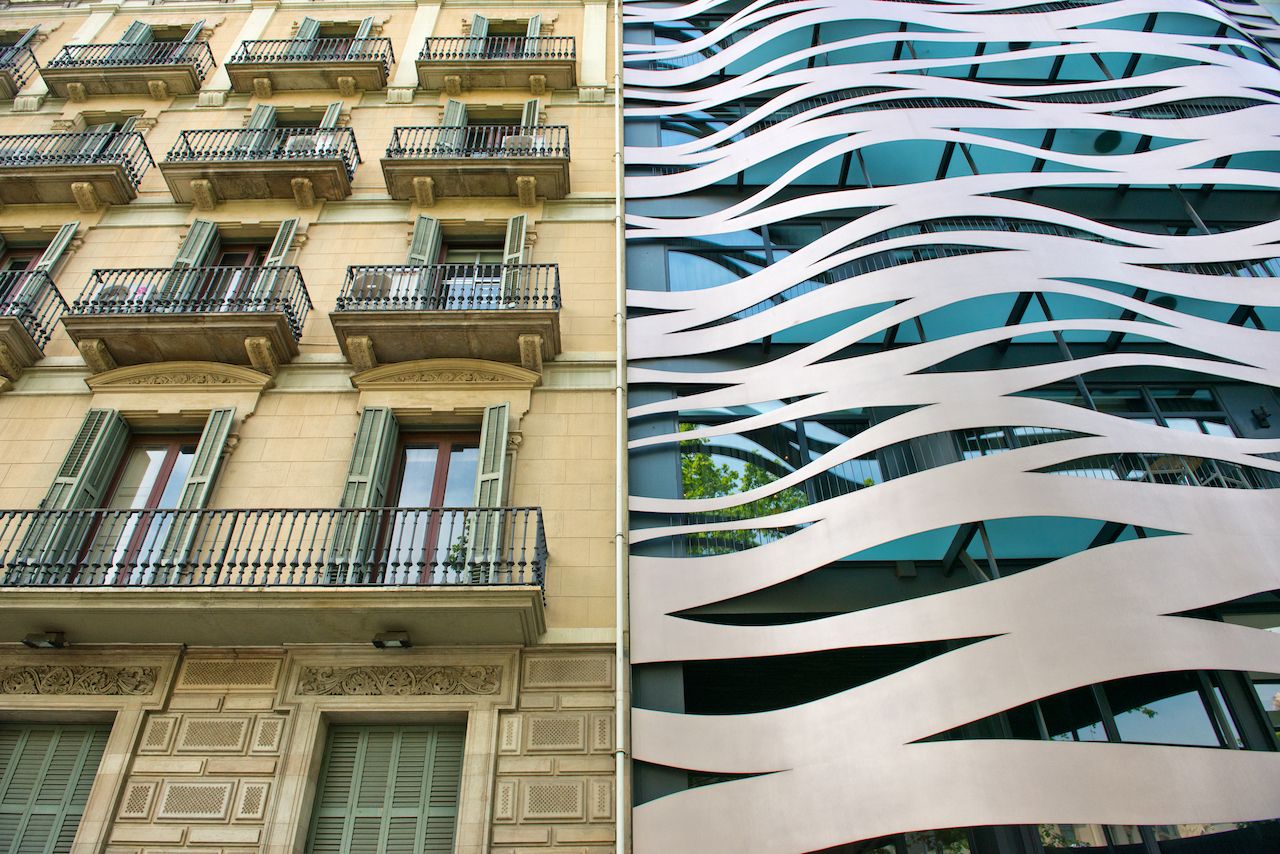 Suites Avenue can be reached by taking the L3 (dark green) or L5 (blue) metro to Diagonal and walking on the Passeig de Gracia. It is close to Casa Battló, so you can also reach it by exiting the Passeig de Gracia metro stop and walking northwest for a few minutes. This striking, contemporary building was designed by famous Japanese architect Toyo Ito. It opened in 2009 as a luxury hotel, fit with tourist apartments, a spa, and a communal rooftop terrace. Obviously, most of us cannot afford the accommodations of Suites Avenue, but this is yet another building that is best appreciated from the outside.

Suites Avenue has an impressive, stainless steel facade that is composed of curving, cut-out strips of metal. It plays off the modernist design of a building on the opposite side of the street: Gaudí’s La Pedrera. Stand in the middle of the Passeig de Gracia and glance back and forth at these two structures, which were formed about one century apart. It will feel as though you are traveling in time. 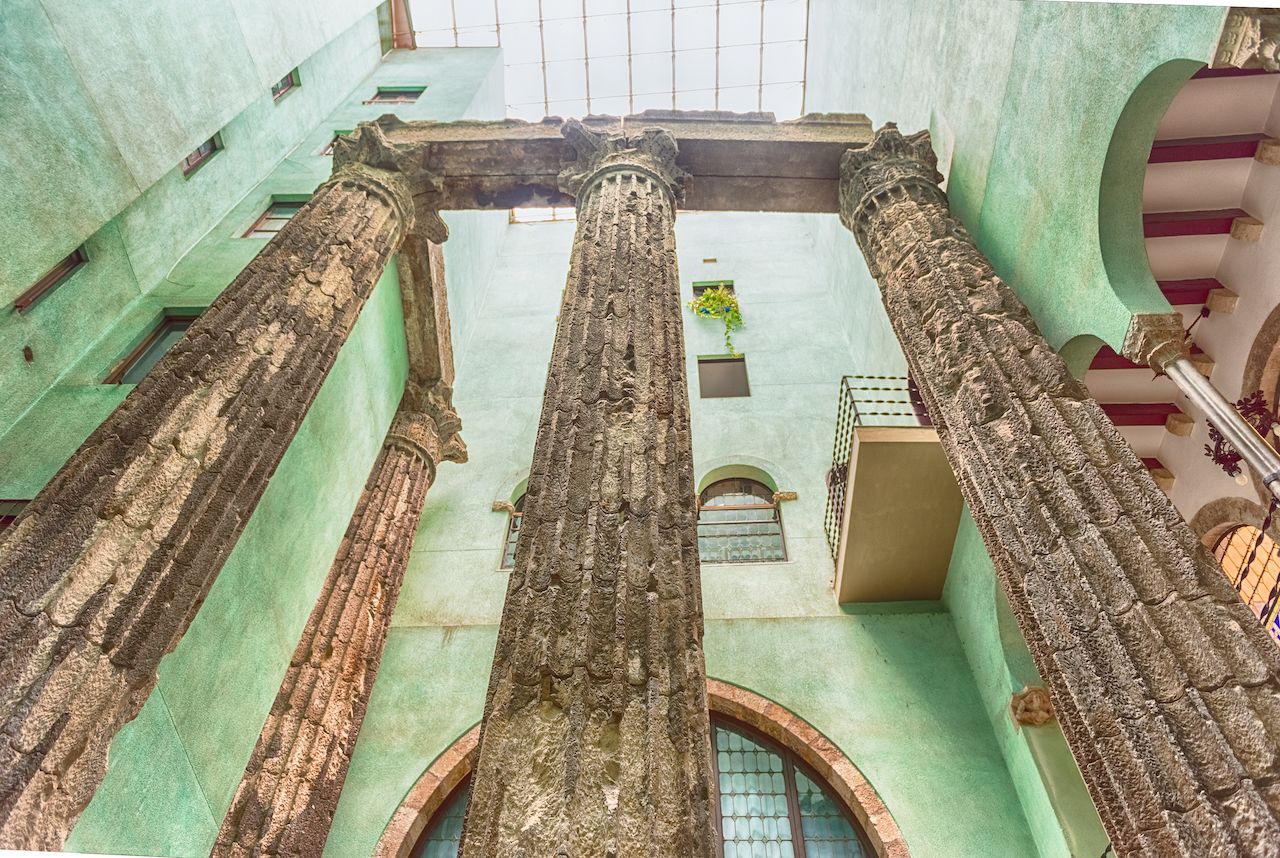 The Temple of Augustus is near the Jaume I metro stop, which is a part of the L4 (yellow) line. When you exit the metro, walk on Carrer de Jaume I for fewer than five minutes. When you hit the Plaça de Sant Jaume, take a right onto Carrer del Paradís. The temple ruins are housed inside the Museu d’Historía de Barcelona, which is located at Carrer del Paradís 10.

The temple ruins are a testament to Barcelona’s Roman past. Barcelona was founded as a Roman colony, Barcino, and this structure dates all the way back to the first century BC. The columns were initially discovered near Plaça Sant Jaume, which you pass on your walk to the museum. In fact, Plaça Sant Jaume exists in what used to be the center of Roman Barcino. Sit and look at the columns, and you can imagine the people that came here to worship in the days of the ancient colony. 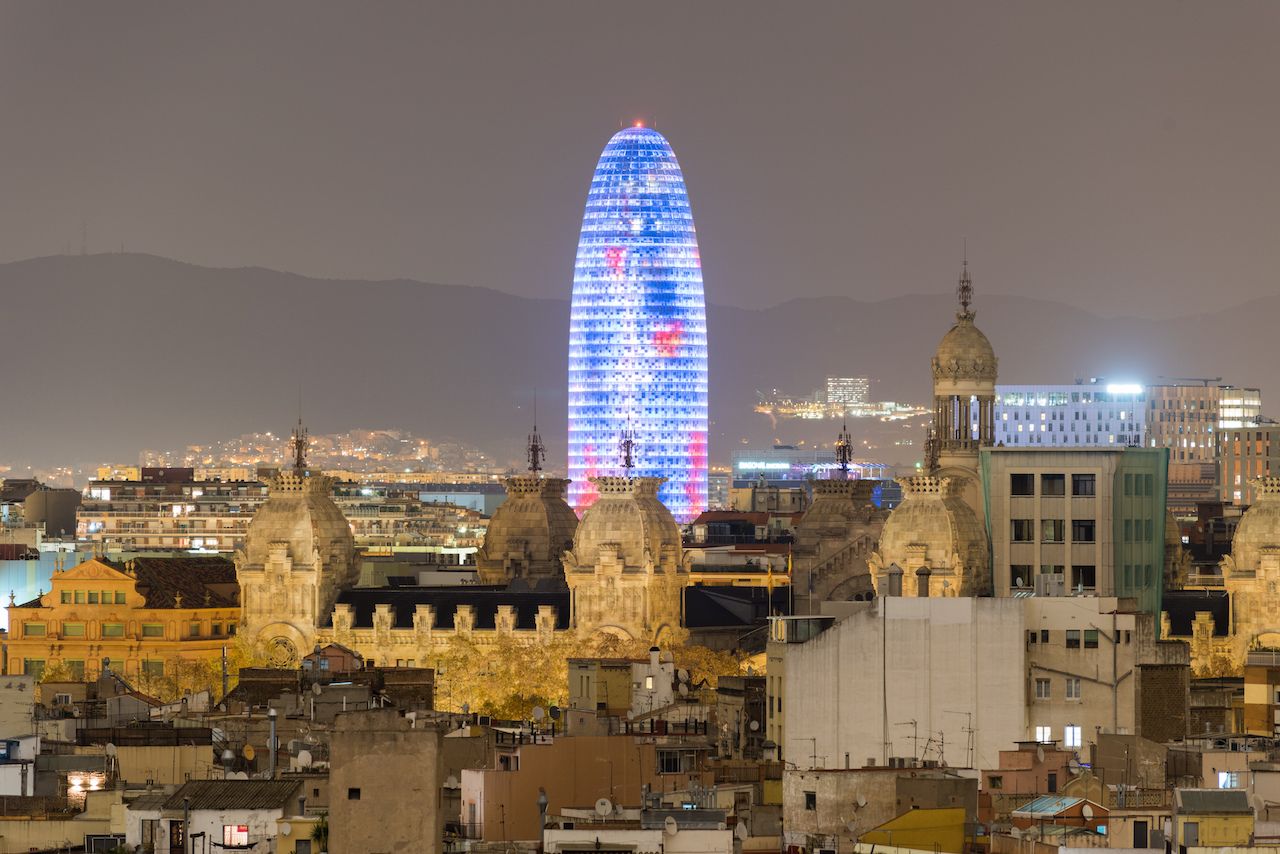 Formerly known as the Torre Agbar, the Torre Glòries is a contemporary skyscraper in the middle of the city. You can reach this destination by taking the L1 (red) metro line to Glòries, or by taking any of the tram lines to Glòries.

The Torre Glòries was built in 2003 based on the designs of a collaborative effort between French architect Jean Nouvel and Barcelona’s b720 architectural firm. The curved tower stands 472 feet tall in the shape of a bullet. It is coated in glass, which reflects the surrounding colors of the sky, city, and Mediterranean sea. It is best to visit the tower at night because it lights up in a magnificent, rainbow display. If you take the metro to the Glòries stop, the surrounding Plaça de las Glòries Catalanes provides the perfect base for snapping photos. 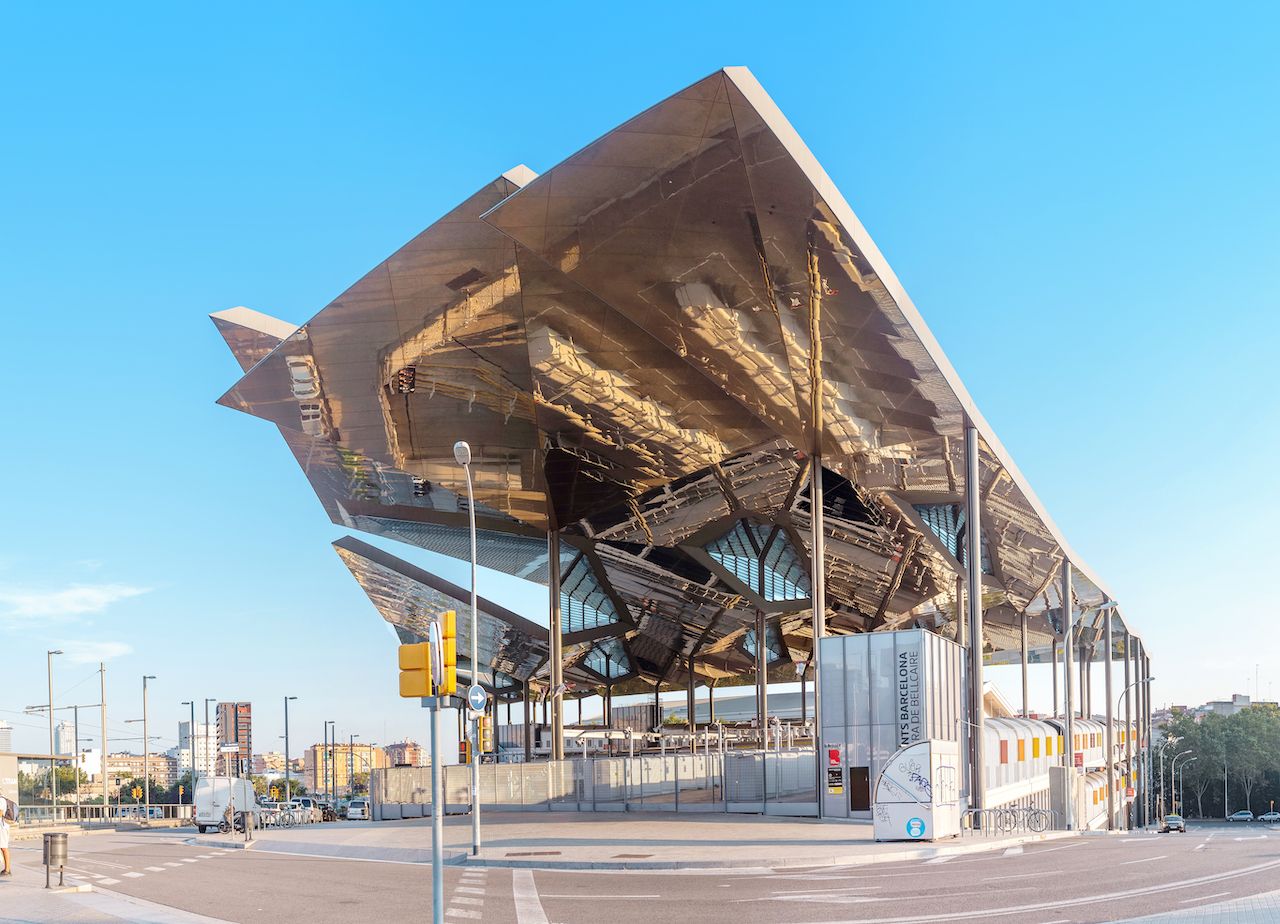 The Encants Vells is a flea market with roots stretching back to the 1300s. It is very close to the Torre Glòries — get off at the Glòries metro stop and simply walk south on the Avinguda Meridiana. This market is yet another impressive, contemporary structure in the heart of Barcelona. It is an open-air plan, but the canopy is 109,272 square feet of minimalist, layered mirrors. It was built according to the designs of architect Fermin Väzquez in 2013, and today it stands as one of the city’s iconic landmarks.

You can visit the market and its 500 stalls of antique vendors on Mondays, Wednesdays, Fridays, and Saturdays from 9:00 AM to 8:00 PM. Like the Mercat Santa Caterina, it is free to enter, but you will probably want to buy at least one souvenir once you’re inside.

Restaurants + Bars8 Rooftop Bars in Barcelona To Take in the City’s Nightlife
Tagged
Art + Architecture Insider Guides Barcelona, Spain
What did you think of this story?
Meh
Good
Awesome

8 Rooftop Bars in Barcelona To Take in the City's Nightlife

Everything To Know About Legal Cannabis Consumption in Barcelona

The Best Bars and Restaurants at Barcelona’s El Prat Airport