On a recent trip to China, from Beijing in the north, to the province of Yunnan in the southwest, to Shanghai in the east, I had people howling. The only problem is, I was rarely sure why.

My Chinese is, to use the local expression, mamahuhu (literally meaning horse-horse-tiger-tiger but colloquially implying something is just so-so). But it gets me by. And often in China, I think that locals hearing a white dude uttering something close to Mandarin is unique enough to elicit a favorable, often humorous response. Comedy is, after all, in large part about defying expectations.

Usually, when I got the laughs, I wasn’t necessarily trying to be funny so much as friendly and engaging. My goal was a connection with people, not an ovation. Humor, however, turns out to be a universal door opener even if it must be contextualized for each culture.

What follows are some examples of what made people laugh in China on this trip with my son, a recent college grad. As you’ll see, some aren’t exactly knee-slappers but for some reason, they worked. Obviously, knowing at least some of the local language helped. But I think the main secret is this: be respectful, be curious and be kind. But then, just have fun. You never know the response you might get…

On our first morning in China, my son and I went to Beijing’s Lama Temple. At the entrance, a woman was handing out boxes of incense sticks. “Are they free?”, I inquired. She nodded. I then asked, “Could I get one for my son as well?” I pointed to him. “Your son?” she said, lighting up. “I thought he was your younger brother!” “Really? You’re too kind,” I responded then added, “I should get you to tell that to my wife so she’ll appreciate me more.” For some reason, the line worked. The woman howled. And so began my confused relationship with Chinese humor. Sure, I was glad she found it funny. But it wasn’t that funny. Or so I thought. Until I used it again and again on our trip with the same results.

Brush up on your zodiac humor.

Whenever the age issue came up later, I noticed something curious. People rarely asked my age. Instead, they wanted to know what year both my son and I were born. Age didn’t matter, but our Chinese Zodiac year did. Each year has an associated animal. In Lijiang, China, a college-aged woman was helping us at a store. She discovered that she was only two years younger than my 23-year-old son. She was a rat and, doing the math, that made him a dog. I informed her I was born in the year of the ox. So later, when a small mutt came up and stood beside her and my son, I said, “Oh look! A rat between two dogs!” Big laughs. A few minutes later, she showed us her pet kitten. “How is that possible?” I asked in mock seriousness. “I didn’t think rats got along with cats.” This time, not even the hint of a smile. “I’m not a real rat,” she said. Hmmm.

In the midst of Lijiang’s daily market, I chatted with three lovely old Naxi women. After the usual “Where are you from and is this your brother?” comments, the lead talker asked me what I thought about America’s president. “Aiya!” was all I could say. It’s China’s go-to expression that can be applied to almost any situation from, “Aiya! The plumbing is backed up!” to “Aiya! You’re not wearing that to my parents’ house for dinner, are you?” In this case, it was an effort to deflect a political conversation. China is, after all, despite the free-wheeling capitalism all around us, a communist country where politics is not a subject you want to pursue. My “Aiya!” response elicited smiles all around. But it only provoked my inquisitor to go further. “China and America are like one big family. Oh Ba Ma understood this. But your current president…” She then took her weathered pinkie, held it up, and waved it in the air. Then, her two missing front teeth aiding her, she spat vehemently on her pinkie. Well. I guess we all understood how she felt about Trump.

Throw in some quirky sayings.

Another way to get laughs was to employ some Chinese idioms people don’t expect foreigners to know. For example, at one point my son went to buy some water. He came out of the store asking for an additional kuai (the term for the local currency). I asked how much the water was. “Six kuai” he said. “That’s crazy. They must be gouging you out here in this park.” This was all in English. He then pointed out that the six kuai was for two bottles, not just one. I turned to the woman selling the water and explained in Chinese, “I thought he had said it was six kuai for one bottle, not two. If it had been for one I would have assumed that you were ‘hanging a sheep head but selling dog meat.’” This is an idiom used to refer to someone cheating you. She took no offense. Instead, she literally bent over laughing. I think it was like hearing a three-year-old spout some witticism from Oscar Wilde. The words and the speaker didn’t line up.

Play with your food.

Another place I routinely used idioms was over food. Many Chinese people marveled that Westerners like us could use chopsticks. And they didn’t hesitate to tell us. I can’t imagine going up to a Chinese person in a restaurant here in the US and saying, “Wow! Amazing! You can use a fork!” But such was the case there. When locals made the inevitable comment about using chopsticks, I threw out this old tried and true expression: “When eating Chinese food, if you don’t use chopsticks, the food doesn’t taste good.” Guaranteed amusement. 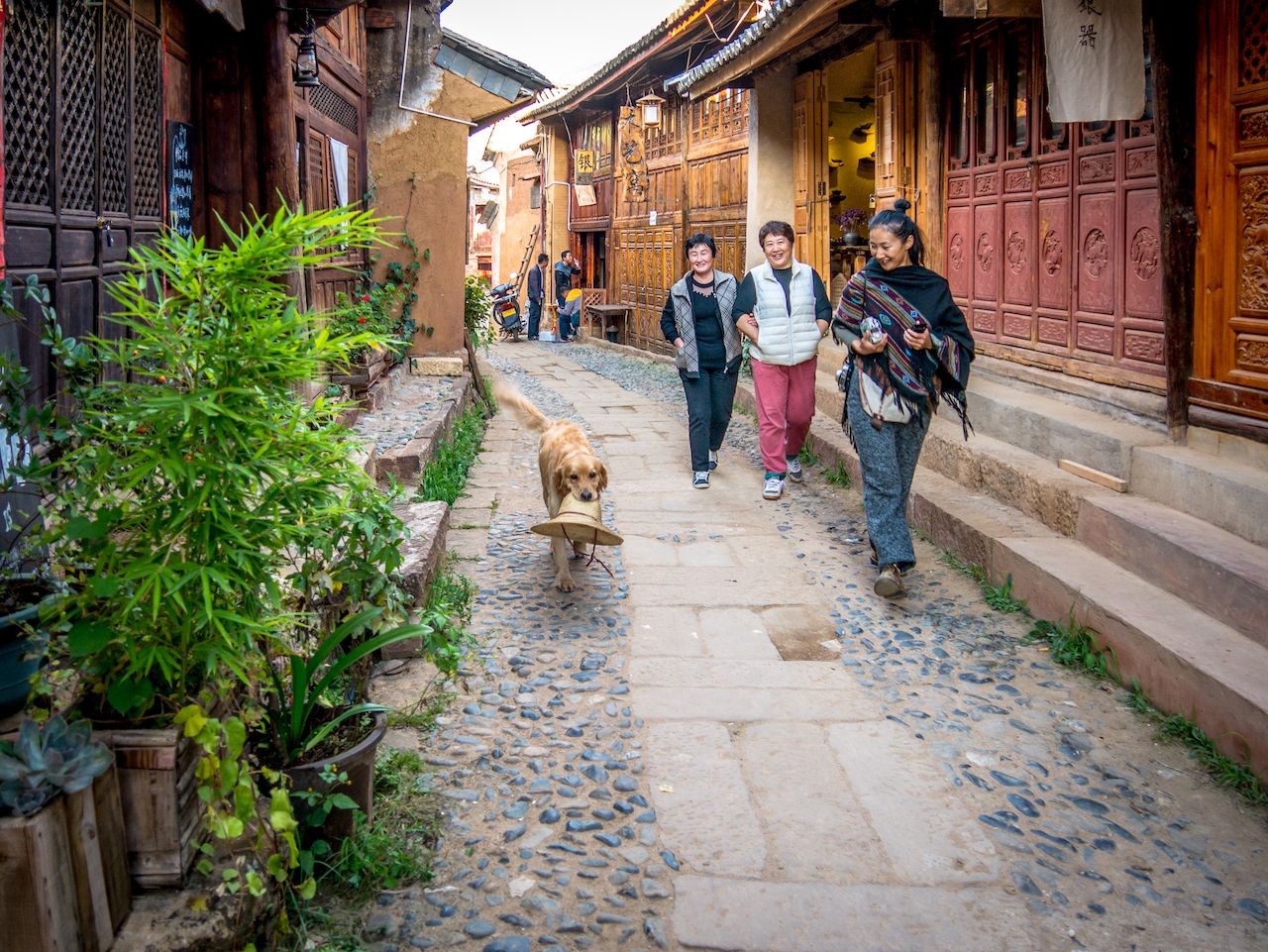 You don’t have to say much to get a laugh. In this case, along one of the narrow streets of Shaxi, China, I simply said, “Very useful” and pointed to the dog carrying the hat. That’s all it took to get a good round of laughter.

Get a running start.

In the small, ancient water town of Tongli near Suzhou, my son and I dined at a table along one of the canals. After dinner, as I was paying the bill, I said hello to the people at the table next to ours. “You ordered two bottles of beer!” one of them said. I wasn’t sure if he was amused, shocked, or proud of our beverage choice. But I looked down on their table and saw a bottle of Bai Jiu (white liquor that can remove fingernail polish, stomach linings, or driveway stains). I told them, “Oh, you’re drinking Bai Jiu!” They beamed and held up the bottle. “We just drank beer,” I said then added, “I guess this must be the adult table where you get to drink Bai Jiu and we were at the kids’ table drinking beer.” All four of them started laughing hysterically. At first, I wondered why my comment was so funny. Then I looked back at the bottle and realized it was half empty. Anything is funnier when you’ve consumed that much Bai Jiu.

Work the material that works.

One sure-fire laugh-getter was the phrase, “Hao de bu de liao.” As near as I can figure, it translates to something like, “Super-duper.” It sounds funny when you say it. The meaning is funny. And when you use it in odd situations, it always gets a laugh. “That meal was super-duper!” “The weather today is super-duper!” “Do you need another napkin?” “That would be super-duper!” Laughs every time.

It’s not the jokes that matter.

By the end of the trip, I was never really sure why people were laughing the way they did. But it didn’t matter. We made wonderful connections with the people we met. I may not have understood the nuances of Chinese humor, but I could always tell when something clicked, when I went from being just another foreign traveler to someone they seemed genuinely glad to have met. Laughing together fosters key moments of openness and connection. And those moments don’t make your trip just fun or interesting. They make it super-duper.

10 Things the World Can Learn From China
Tagged
Narrative China
What did you think of this story?
Meh
Good
Awesome