The Greenland Ice Sheet covers over 80 percent of Greenland—the world’s biggest island— leaving its nearly 57,000-strong population to live in cities and villages along the coast. To get around between these small towns, you need to travel by helicopter and ferries, not cars, trains, or buses. Meaning that a trip to Greenland takes a lot of careful planning. Even to the first-time visitor, it quickly becomes clear that for every aspect of life in Greenland, the weather dictates where and when you can go anywhere. But a trip to Greenland is well worth the effort, if only to take part in the many indigenous hunting and fishing experiences this Arctic island offers visitors.

The people who know the most about Greenland’s finicky climate are probably the country’s indigenous Inuit population. Descendants of the Thule people that migrated to Greenland in the 9th century, their culture, customs, cuisine, and livelihoods have been molded by the challenges of the Arctic climate and an otherworldly landscape of mountains, fjords, icebergs, sea ice, and glaciers. Here hunting, gathering, and fishing are more than just a means of survival—central to the Greenlandic identity. These traditions are also about pride, tradition, and heritage — and there indigenous hunting and fishing experiences many communities are willing to share with tourists.

Hunters and fishermen rely on dog sledding as a means of transportation to cross long distances in winter. While in modern times, snowmobiles are an efficient alternative, dog sledding is still necessary to reach parts of the back country that snowmobiles cannot, and to keep environmental impact to a minimum. The income from tourism helps the mushers feed their dogs and keep the traditions like dog sledding alive.

What to eat in Nuuk, Greenland’s capital 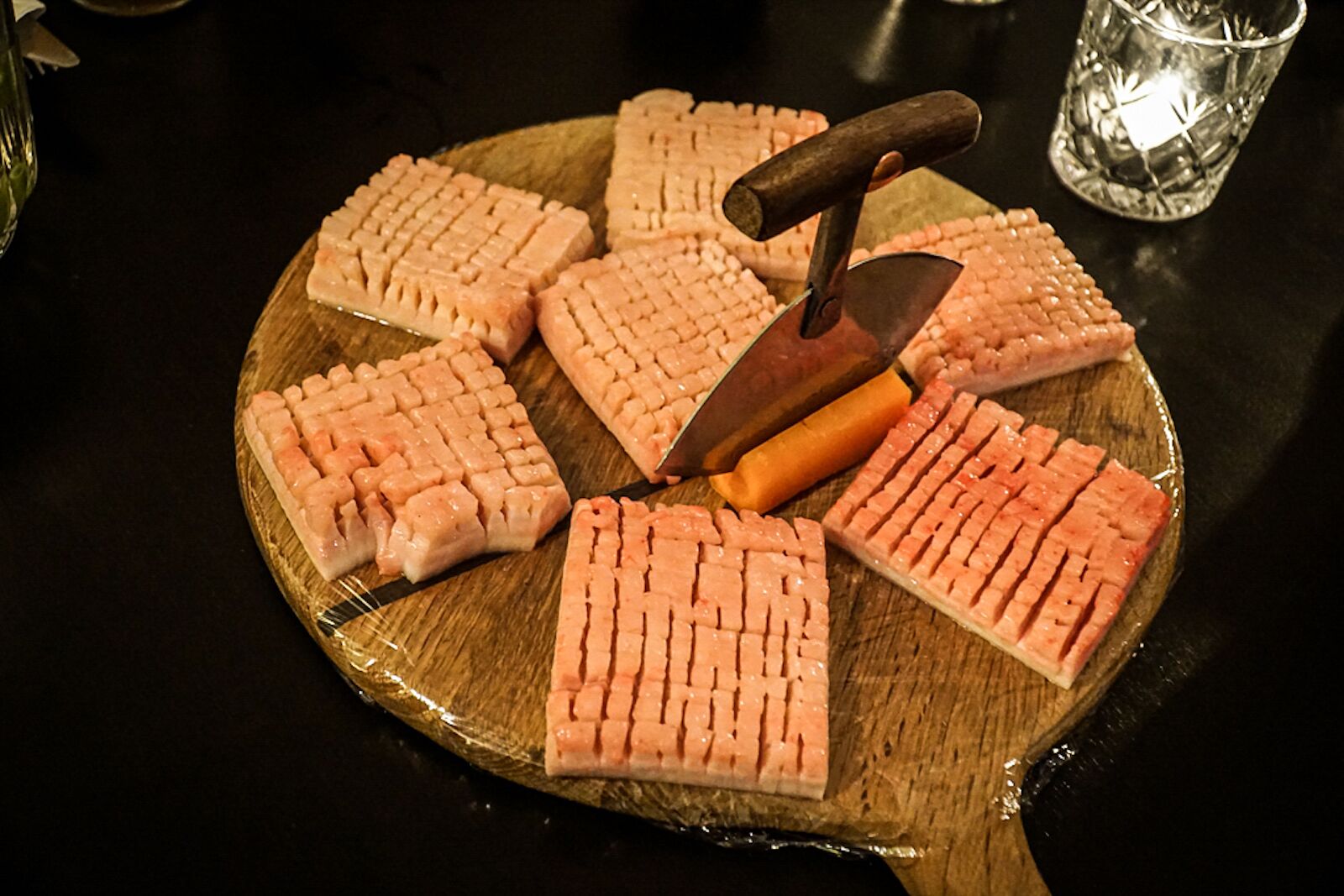 Spend a day or two exploring the capital Nuuk, home to nearly 15,000 people. With museums, restaurants, and contemporary architecture, all over Nuuk, it’s an excellent place to dip your toes in the art and food scenes of Greenland.

A 30-minute walk from the city center, the cozy Cafe Inuk overlooks Nuuk Fjord and is a great spot to sample Greenlandic cuisine. One of the co-owners of the cafe and the surrounding group of colorful houses that together make up Inuk Hostels is Maren-Louise P. Kristensen. Inuk herself, she is both knowledgeable and passionate about the stories of Inuit cuisine. 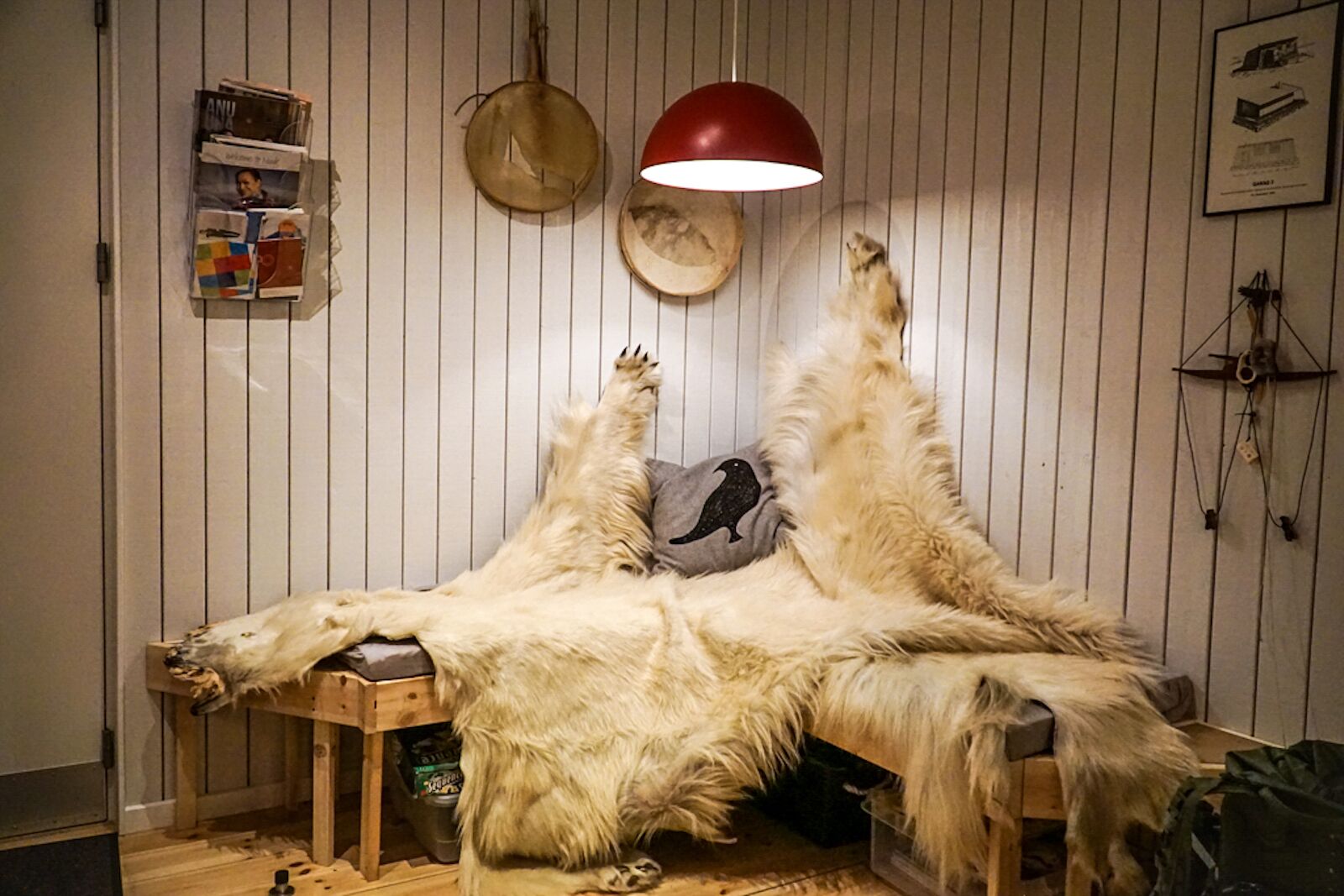 If you’re after dishes that speak to the history and landscape of Greenland, expect to be served foods like ammassat or dried capelin, and panertoq (otherwise known as salted and dried cod) — both are commonly eaten snacks in Greenland. Then there’s mattak, or raw narwhal blubber, cut into small pieces that you can dip into soy sauce. Raw, smoked, or dried, salted and preserved, these foods reference a cuisine that was shaped by the cold, harsh environment of the Arctic. 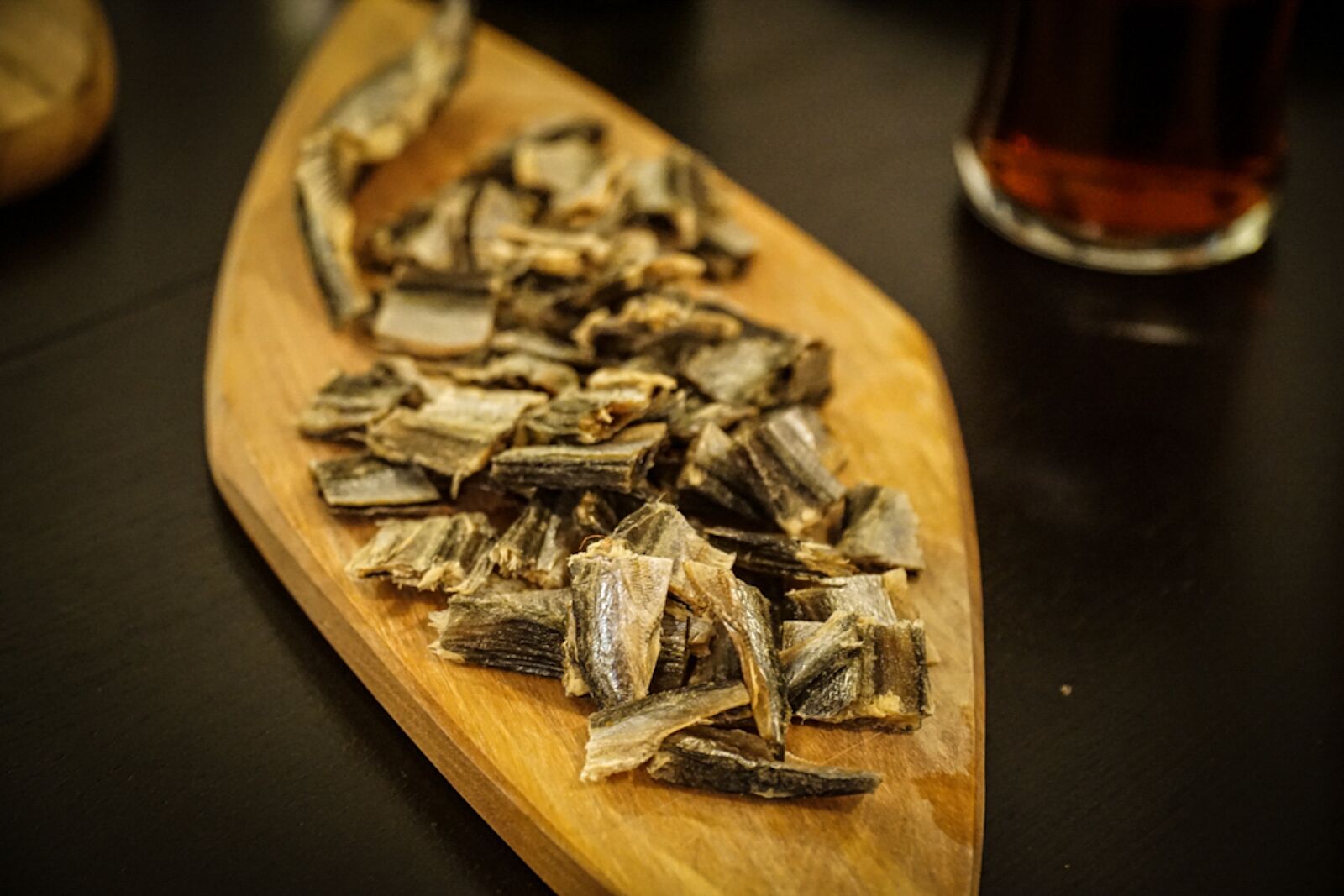 You’ll find some of these on the menu at Cafe Inuk, as well as more modern dishes like a reindeer burger and a flavorful reindeer stew.

How to go fishing in Nuuk Fjord 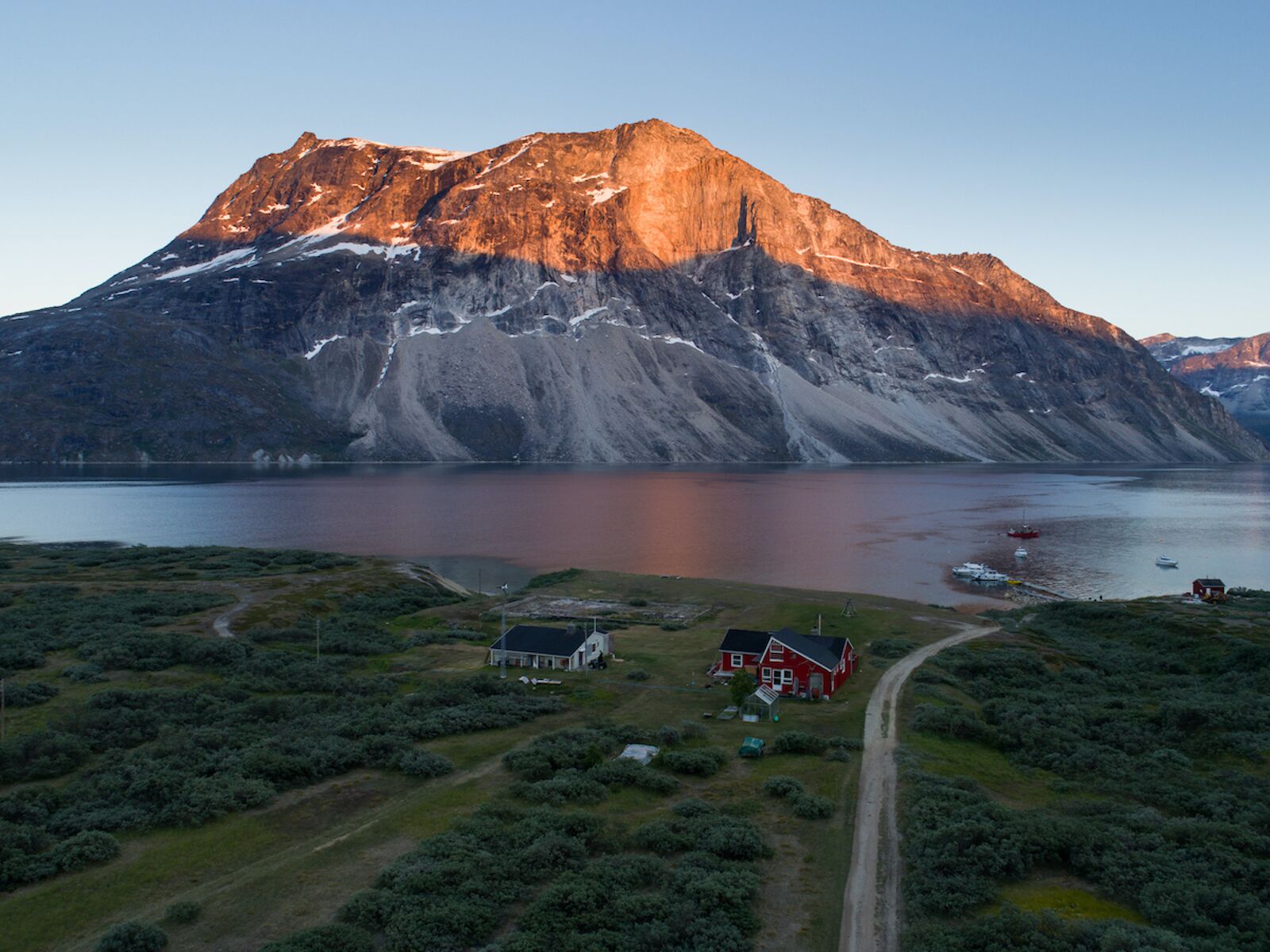 Between June and September, take a cue from the locals and hop onboard a bright yellow Nuuk Water Taxi from the old harbor of Nuuk to set sail in the Nuuk Fjord for some deep-sea fishing. On this 6-hour day trip, you’ll have plenty of time to admire views of Sermitsiaq Mountain as well as islets, waterfalls, and icebergs. Thanks to the abundance of cod and redfish in these frigid waters, even the most inexperienced anglers can expect to find themselves in luck. 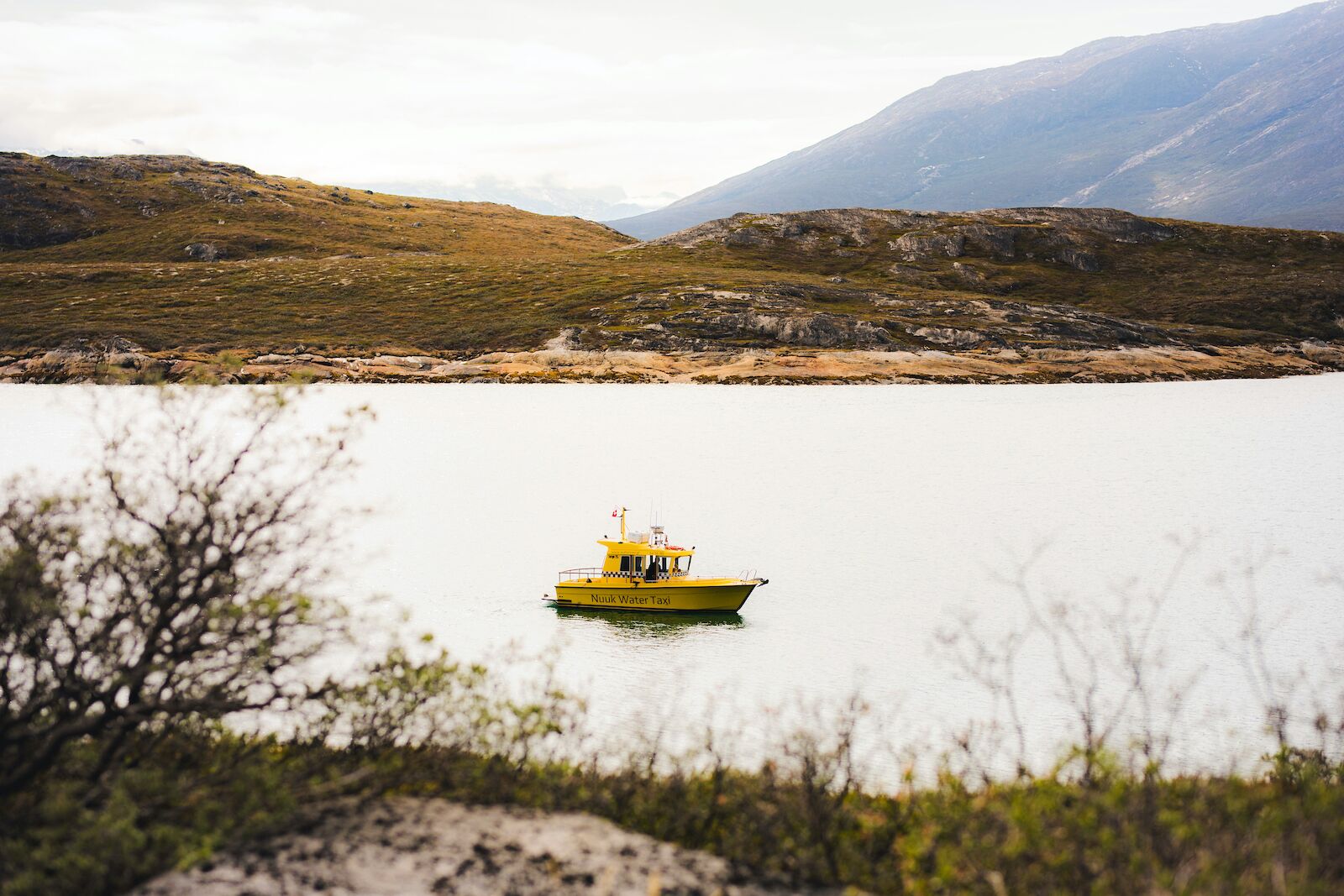 Catch in tow, you’ll arrive at the settlement of Qooqqut, about 30 miles from Nuuk, to dine at Qooqqut Nuan, a restaurant housed in the restored building of a former sheep breeding station, that was also once a burned-down hotel. Surrounded by mountains in a landscape with rich geological history, the restaurant is owned by Inuk chef Mads Bek who also grows vegetables and herbs such as Arctic thyme.

Serving fresh seafood dishes that marry Danish, Greenlandic, and Thai influences, thanks to Bek’s wife, who is from Thailand, this place is very popular in the summer. Do as the locals do and hand over your freshly-caught fish to be turned into one of the best meals you’ll have in Greenland. Then, enjoy the feast alongside sublime views of the fjord before returning to Nuuk.

How to go ice-fishing in Uummannaq 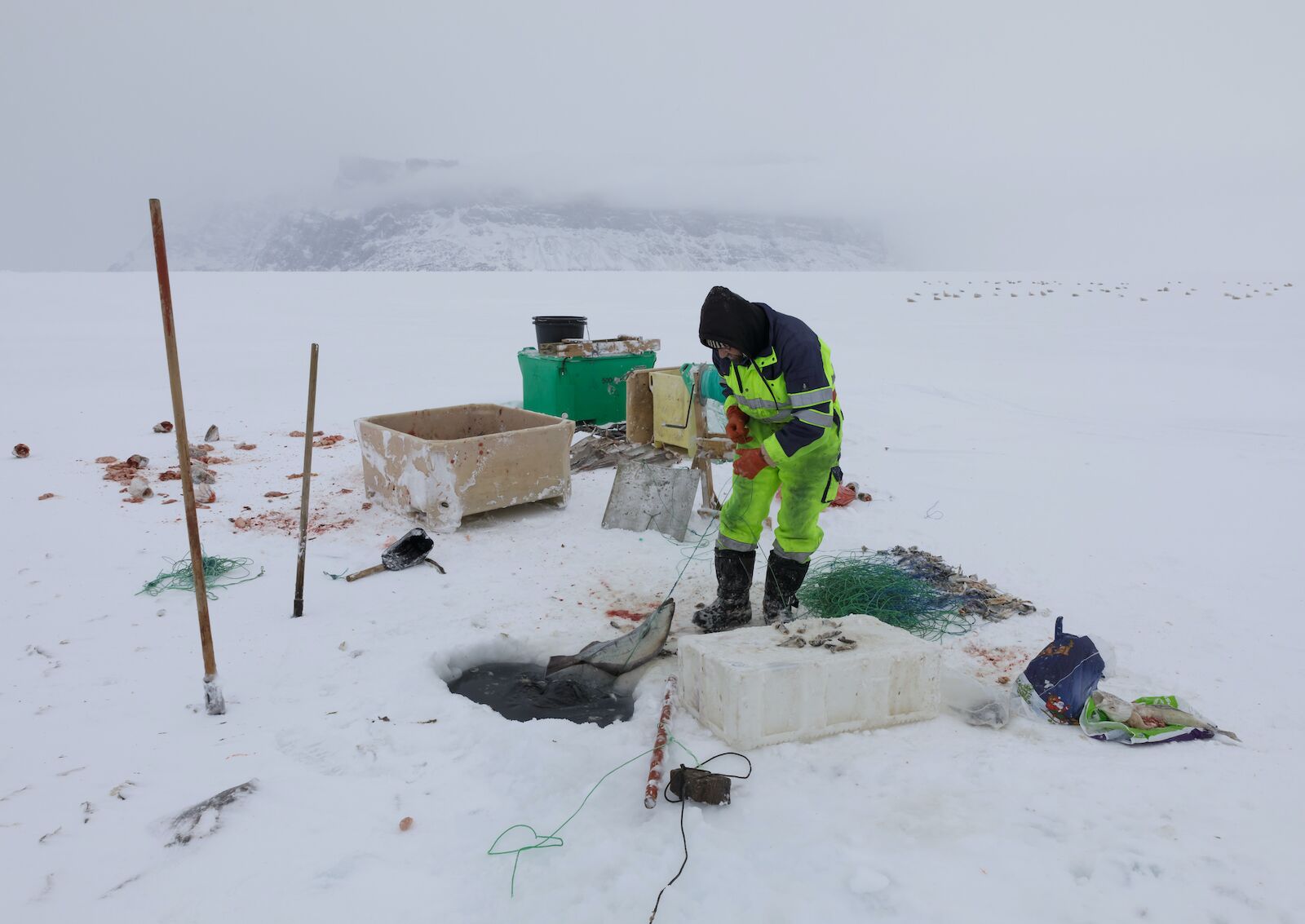 Located in northwestern Greenland, above the Arctic Circle, the town of Uummannaq is named after the heart-shaped mountain that rises over it. Here, colorful houses dot the rocky island that is home to just 1,400 people. 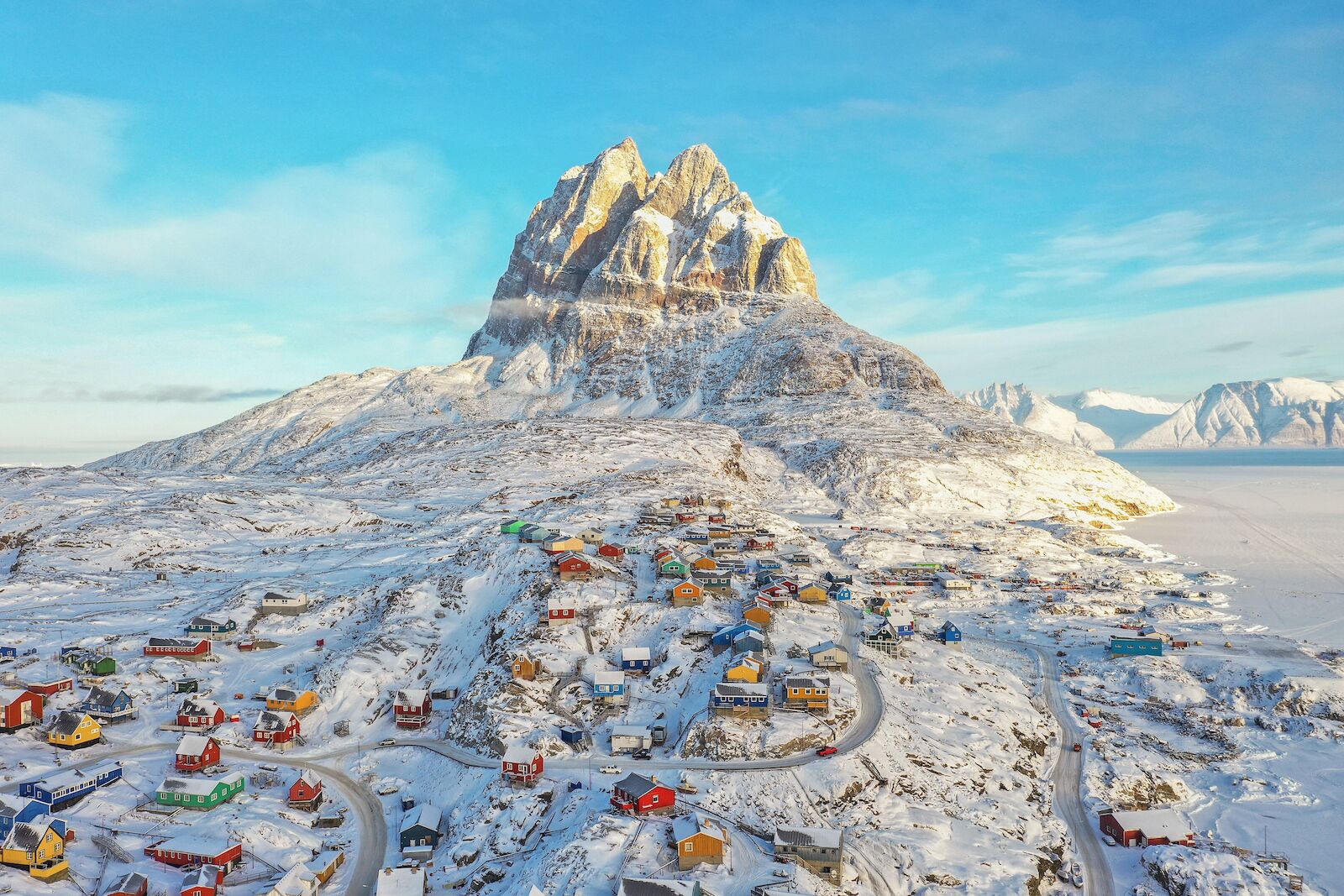 In winter, between February and April, with the town as your base, you can go ice-fishing with Uummannaq Sea Safaris. Surrounded by the magnificent frozen landscape of the Uummannaq Fjord, you’ll follow the example of Inuit fishermen and journey from town by snowmobile to a fishing spot, where you’ll use a tooq, or a long wooden ice chipping tool, to make a hole in the sea ice.

Then you’ll learn how to use a hook attached to a sinker and a line that is nearly 500 meters long to catch catfish, redfish, or Greenland halibut. Even in freezing temperatures, expect to sweat under your layers while hauling your catch. While this 5-hour tour sounds like hard work (and it is), it’s also one of the more exciting cultural experiences you can have in the country.

How to go dog sledding in Ilulissat 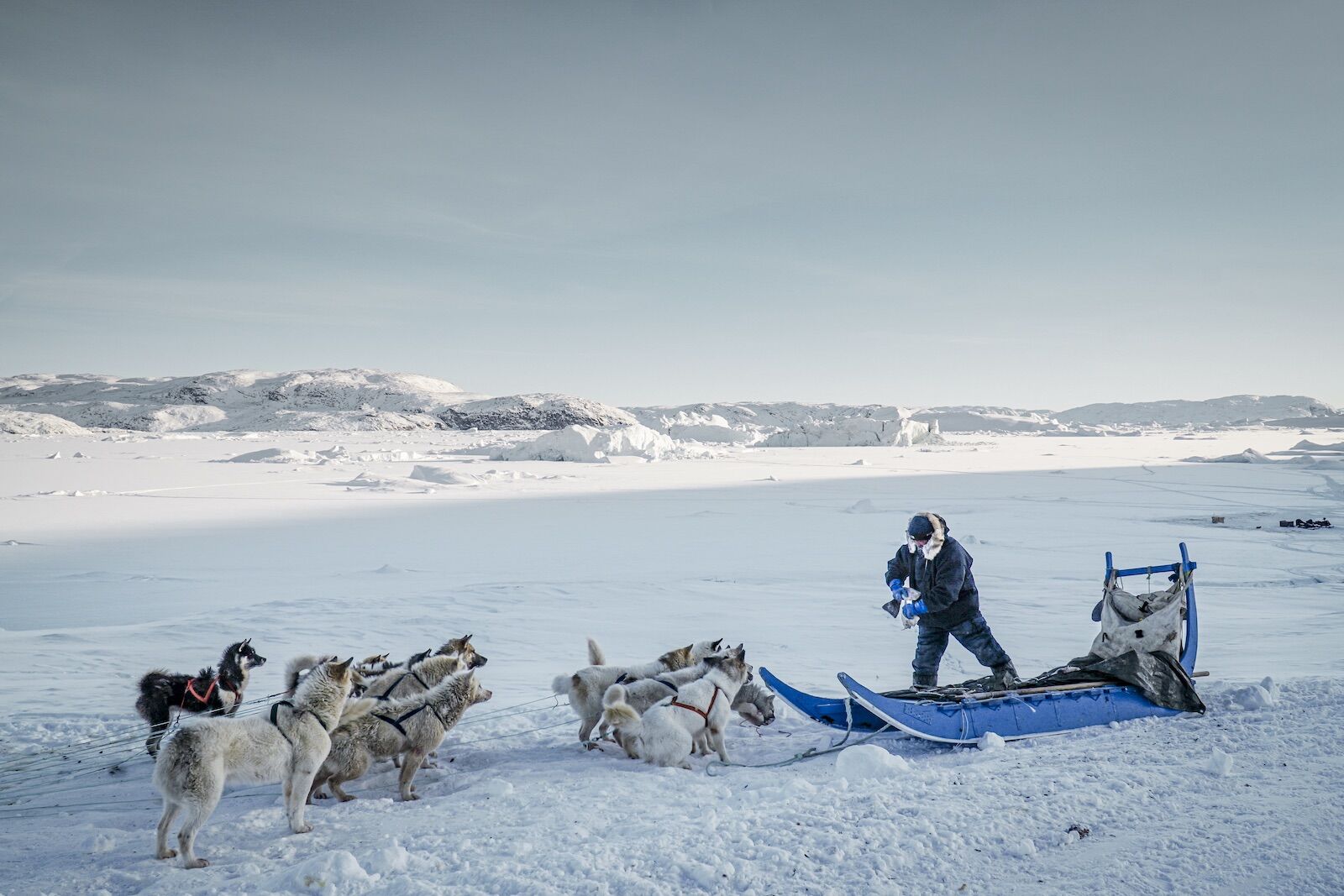 From December to April, you can experience the magic of traversing the country’s surreal winter landscapes by dogsled in Ilulissat, a town of 4413 people, that lies 217 miles north of the Arctic Circle on the country’s west coast.

On a dog sledding tour with World of Greenland, you’ll be picked up from Ilulissat. You’ll change into warm sealskin clothing, then, seated in a wooden sled harnessed to a pack of dogs, you’ll find yourself crossing sea ice, glacial streams, and frozen fjords. Bred specifically for dog sledding (not pets, as you’ll be informed), their immense strength and intuitive ability to judge the thickness of sea ice make them an indispensable part of life in the Arctic.

Leading them is an Inuit musher whose commands, along with the sound of his cracking whip, are the only sounds in an otherwise quiet landscape. Halfway, you’ll take a break to sip on hot coffee and take photos while the dogs rest before the journey back to Ilulissat.

How to stay at a reindeer farm

For a true taste of Greenland’s hunting and fishing lifestyle, book a tour with Wild Greenland, an operator located at Isortoq Reindeer Station, a working reindeer farm in South Greenland between July and September. To get here, fly to Narsarsuaq, a village of just 169 residents, before sailing to the reindeer farm where you’ll be based for a week.

Over the next few days, find yourself completely immersed in the self-sustaining way of life at the farm. Go on scenic hikes to see lakes, valleys, and rivers and incredible views of the Greenland Ice Sheet. Spot musk oxen, free-roaming reindeer, Arctic hares, Arctic foxes, sheep, and eagles, and learn how to forage for berries, herbs, and Arctic tea.

Go on sailing trips in the fjord system to see calving glaciers and hike on a glacier.

Try your hand at deep-sea fishing, fish for Arctic char in rivers, and learn how to smoke fish for dinner. This tour offers plenty of insight into life as a reindeer farmer with opportunities to learn skills like knife carving, tanning skins, and food preservation.

You’ll sleep in simple but comfortable rooms at the farm and spend a night in a tent at an old Inuit camp by the sea. The meals here are prepared from locally foraged and grown ingredients, fish that has been caught that day, and reindeer from the farm.

TravelVisiting Indigenous Communities Is a Delicate Balance of Respect and Education
Tagged
Food + Drink Travel Greenland
What did you think of this story?
Meh
Good
Awesome

In Greenland, Kayak Between Icebergs To Reach an Ancient, Rumbling Glacier