DINNER and maybe a movie. As a native New Yorker, that generally summed up most of my date nights in the US.

At the age of 26, I took a leap of faith and moved to Namibia where my dating life took a dramatic turn.

Just before I left for Namibia a few friends joked that I’d find my ‘African king’ there. I brushed them off. The last thing I was moving to Africa for was a date. My focus was finally experiencing life on the African continent. That superseded everything else.

About six months into my Namibian school year, a new teacher joined the staff. He was a Namibian who was born and raised in a nearby village.

Our first date was a walk through town. It was his suggestion. We bumped into many people that he knew and he took the time to give me the background of every single person he greeted. It gave me a deeper insight into the community that I hadn’t had before. It put a more human face on my Namibian experience.

We ended that first date sitting under a gigantic baobab tree, just getting to know each other. I remember noticing how magical the simplicity of our date felt.

And that was the beginning of our relationship. From that point on we were inseparable. The fact that I was a New Yorker and he a Namibian from a rural village made little difference.

His name was Elago which translated to ‘lucky’ in his mother tongue of Oshiwambo.

As we dated I was never formally introduced to his mother. It wasn’t the custom of his tribe to bring girlfriends home. And since my family was on another continent, he didn’t get to meet any of my relatives either. 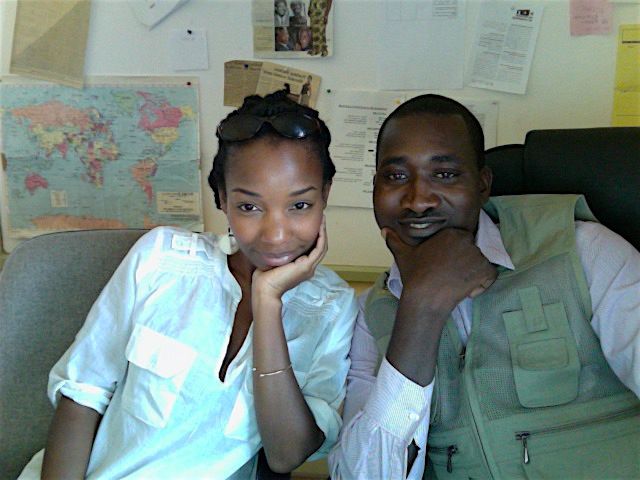 The author and her husband.

But we lived in a small town so it was inevitable that we’d run into his relatives. One day, we saw his mother in town and it was awkward. She gave me a bit of a stern look, but politely greeted me and then looked away. After that, I did not see her for a long time.

His mother had heard through the grapevine that her son was seen around town with an American. I’m not sure how comfortable she was with how often we were seen together in her small community.

I was admittedly very naive. In my American mindset, I never considered how our constant togetherness might go over. How we appeared in public at work or in town never crossed my mind. I was smitten. We were in love. And my Namibian boyfriend was so head over heels that he just about threw his cultural dating norms out of the window.

Three years later, Elago and I were still dating. We’d even shared an apartment together for a period. From what I gathered, his mother didn’t approve of us living together. But she also lived a good nine hours north, so we were able to swing it.

Throughout all of this, the question of whether I would return to New York hovered. My work visa was coming to an end and I couldn’t see myself going through the stressful application process again, so we decided that getting married was the next logical step.

Now came my moment of truth. It was time for me to finally meet my future in-laws, so we decided to spend about two weeks in my fiance’s home village over the Christmas holiday.

I was extremely nervous. I wondered how his mother would accept me given the time her son and I had spent cohabiting. And overall I was unsure of how two weeks in a scorching hot rural Namibian village would go.

I’d had a brief experience with the Aawambo tribe’s village life before. It was a lot of manual labor and there was often little to no electricity. I wondered how I would be spending my time, especially given the language barrier. There were many unknowns.

I remember arriving in the village after dark and heading to bed after a quick introduction. The very next morning my soon-to-be mother-in-law got straight to the point. She greeted me and said, “Are you going to be with us in the fields or are you going to stay in the house?”

I said I would be out with them and so that’s what I did.

Throughout that visit, I found myself constantly trying to fit in. Everyone around me was constantly milling about, doing all sorts of housework. Cooking on the fire, repairing the roof of a hut, fetching water, herding cattle. It never ended.

I felt self-conscious and lazy.

I would ask my fiance’s aunts if there was anything I could help with. They would always respond with a “no, my dear”. I ended up spending a lot of time sitting and being a sponge. Everyone was speaking in their mother tongue which meant I could barely participate in conversations. So, I sucked it up and smiled to appear pleasant.

My husband did his best to make me feel included. But I remember feeling odd and out of place. And lonely.

Since we weren’t married, my new fiancé and I were required to sleep separately. In the village, homes consist of several huts and small brick buildings. I shared a bed with female cousins of his while he slept in a totally different structure.

At the end of the visit, my then fiancé announced to his grandparents that we would be marrying later that year. My husband translated to me as they gave us their blessing and marital advice. Our wedding was now official. 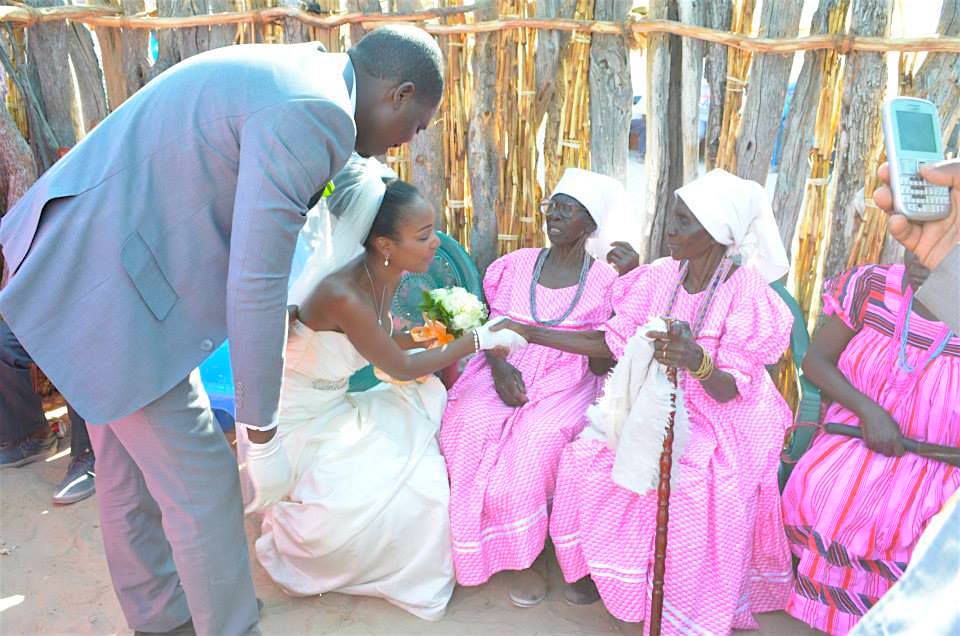 Greeting the elders at the wedding.

Right away the planning felt rocky to me.

I remember wanting to know exactly how many guests we should expect. How else would we plan for items like tables and chairs? Yet no one could give me an exact number of wedding guests. It turned out that in my fiancé’s tribe, weddings were come one, come all.

Growing up I always thought I’d have a makeup artist and hair stylist for my wedding. But I was marrying in small town Namibia so that simply wasn’t going to happen.

I was also informed that my husband and I would be sharing the church with three other couples marrying the same day. This was not what I’d ever envisioned my wedding day to be like. We did end up having a bilingual pastor who agreed to give the service in English and Oshiwambo, so that my American guests and I could understand.

Just about the only thing I did have control over was my wedding attire which I got in New York. Everything else — from the bridesmaids dresses to our cake and reception tent was Namibian style.

At some point, it became apparent to me that, given my husband’s natural familiarity with weddings in his tribe, most of the planning would fall on him. He ended up planning the brunt of our wedding.

And then there were the traditional aspects of marrying into the Aawambo tribe. I’d attended a few of their weddings, but being in your own was another story. I really didn’t have a clue about just how much tradition was involved in marrying into this culture.

The wedding day went way beyond us just saying our vows and partying at a reception. After church, we couldn’t enter the family home right away. We had to be officially welcomed by family members who symbolically sang and shoved spears into the ground. Each spear represented a cow we were given as wedding gifts. Then we had to greet the elders. Next up was our prayer and gift-receiving ceremony. And finally, our reception.

I sort of floated through the day. My husband and his cousins did a fantastic job of guiding me through it all. My husband and our planner perfectly captured the essence of American and Namibian cultures.

We have now been married for just over two years and we have a one-year-old son. I am still getting to know my in-laws. Each visit to their village gives another opportunity for me to immerse deeper into their culture; however, my vastly different background means immersion isn’t always easy for me. 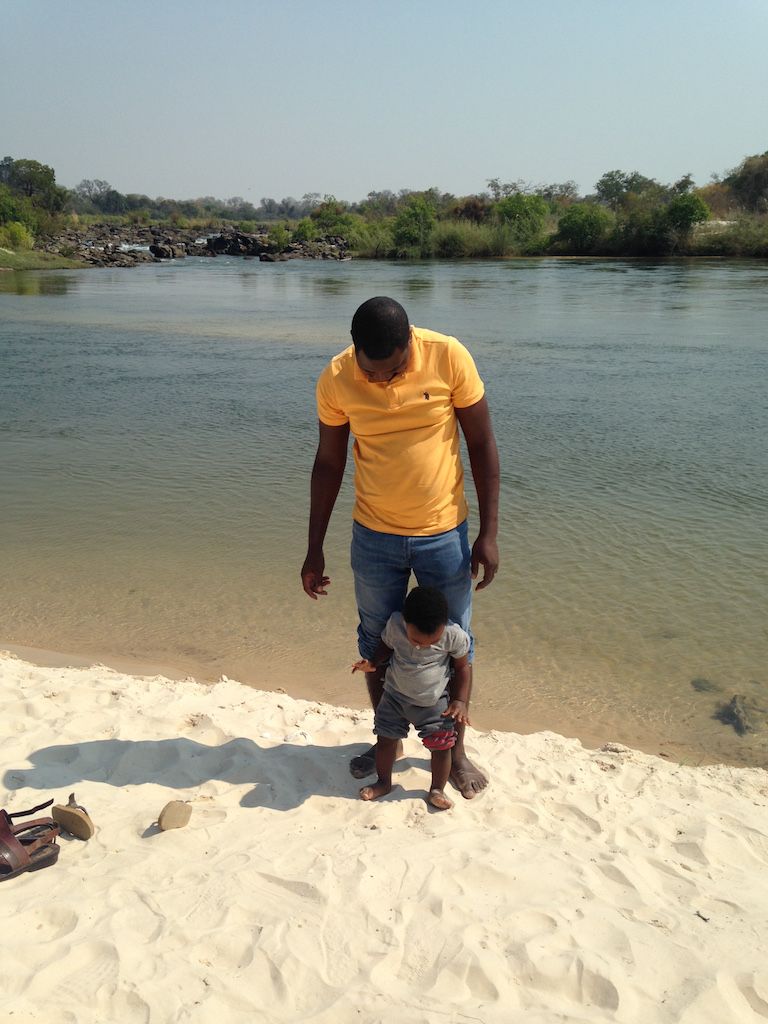 The author’s husband and their child.

Over the years, I’ve grown to a new level of comfort. I try not to transform into a woman of his tribe. I am simply myself. When we visit the village, I experience their culture, but I don’t lose myself in it. I recognize that while different, I bring my own unique assets to the family.

Despite our patchy beginning and her limited English, my mother-in-law and I have grown much closer. She also has a kind-hearted and thoughtful way of always making me feel included.

And as for my husband, he is ever the gentleman. We’ve always clicked as if we grew up across the street from each other.

I’ve dated American men from the same state who didn’t understand me as well as my husband. I’m still tickled by how I managed to find love all the way in southern Africa. I truly got “lucky”.

Couples4 Things You Need To Remember About Mixed Relationships
Tagged
Couples Namibia
What did you think of this story?
Meh
Good
Awesome

Traveling To Africa for the First Time as an African American

Confronting White Privilege as a Black Expat in Namibia