New York City is a city of immigrants. From all over the world, people have come here seeking different things, whether it be a new and better life, the American Dream, or just a change. One group of people that makes up a significant part of the city’s population is the Irish, and NYC currently has one of the largest Irish-American communities in the US. The influence they’ve had on the city can be seen in many ways, but one of the main ones that people pick up on immediately is the number of Irish pubs that can be found in all five boroughs. Some are rather gimmicky, others have no fuss or frills, and a few are turning the classic Irish pub concept on its head with modern, whiskey-forward cocktail clubs. With St. Patrick’s Day around the corner, here are the seven best Irish bars in New York City.

Fans of Spike Lee will love Kitty Kiernans, the Irish pub whose exterior the now-Oscar-award-winning director used in his film The 25th Hour. Opened in 1934 and now considered to be a local landmark with red walls, gaslight lamps, and a long wooden bar, the spacious interior feels straight out of Ireland — but in Brooklyn. There’s a TouchTunes jukebox, darts, and open mic nights every Thursday. There’s also a fireplace you can cozy up to, but you’ll probably be as warm as you can be from the fully stocked bar. 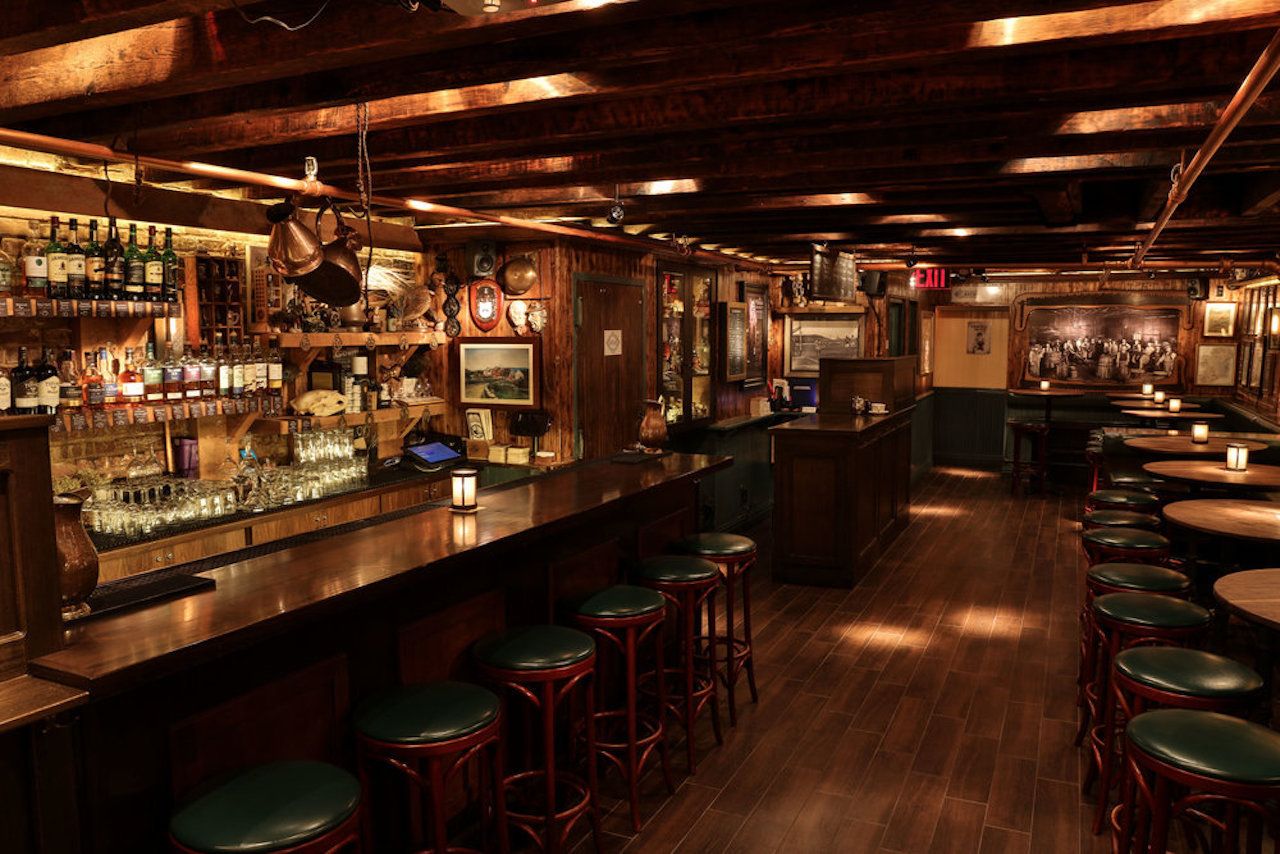 The Dead Rabbit brings the idea of a traditional Irish pub into the 21st century, and it’s that combination that has garnered it so much acclaim that it’s been named the world’s best bar twice in a row and a frequent runner up. With two stories, there’s plenty of space to post up comfortably. Each floor has a different vibe — the taproom on the ground floor feels more akin to a pub, with old photos on the walls and an unbelievably long whiskey list. Upstairs is the parlor, a self-proclaimed “cocktail cathedral.” The cocktail menu includes those with quirky names, like the Reality Check with scotch, cognac, togarashi, honey, vanilla, pineapple, coffee, and lemon.

The decor inside the Wicked Monk matches its name. Stone walls, stained-glass windows, and gargoyle-like statues all paint a picture of a Gothic monastery, with the original wood and stained glass actually being shipped from Greenmount Monastery in Cork, Ireland. The giant black wooden door with the word “Guinness” and the mural on the ceiling, depicting men holding beer mugs and floating beer barrels and bottles, add a touch of reality to remind you where you really are. There’s a number of draft and bottled beers on offer, with prices ranging from $6 to $10. 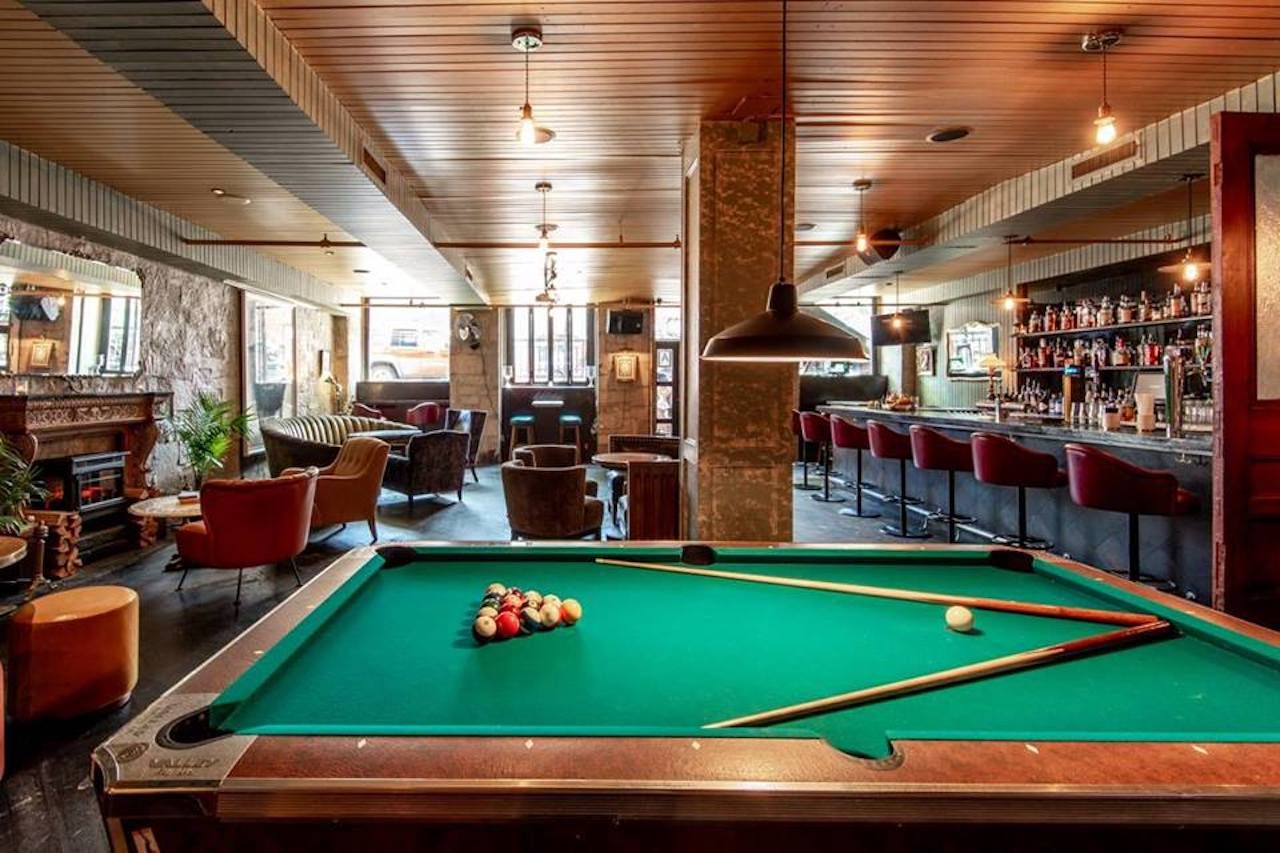 The Craic is exactly what you’d expect an Irish pub in Williamsburg to look like. The hipster influence is evident, with plush leather seating, bookshelves, and abstract art on the walls. But then you’ve got a pool table and a good list of beers, wines, and spirits, and all’s right in the world. Prices start at a low $3, and the highest hovers around $25. The specials change depending on the day, but there are usually specials that run all day, as well as during happy hour from 4:00 PM to 8:00 PM.

Mugs is as local as you can get in this neck of Brooklyn, with people from all walks of life stopping in for a drink here. The beer selection is on a rotating basis for both drafts and bottled, but the cheap prices stay the same no matter what. The food has a wide range here, from chicken wings to mussels. It’s a great place to stop in after a day of exploring Williamsburg or a preemptive move before you start your day; nearby is the fantastic East River State Park with amazing views of the Manhattan skyline. 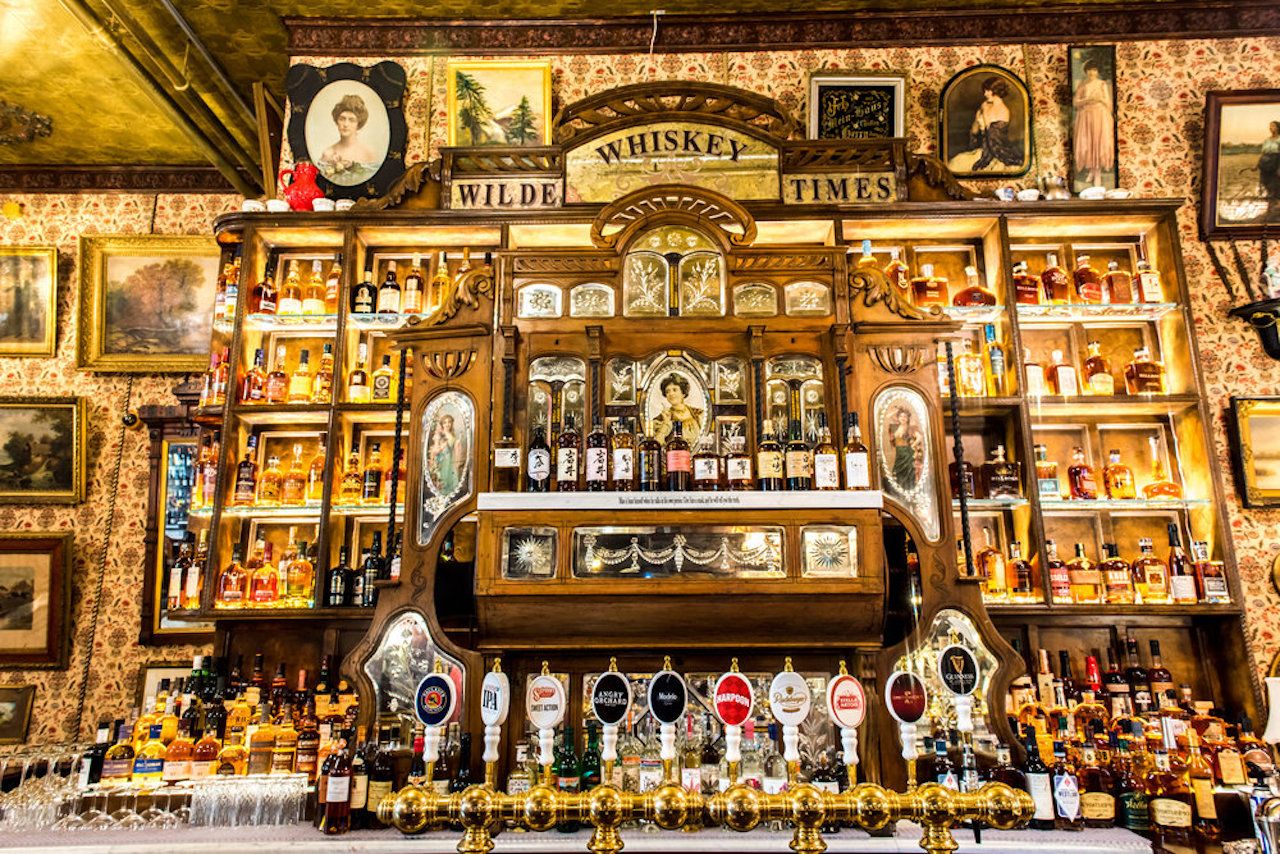 The Irish duo behind the popular NYC gastropub Lillie’s Victorian Establishment decided to open up the Oscar Wilde both to pay homage to the writer’s history and because of his friendship with Lillie Langtry. The gorgeous, eye-catching decor is a mix between an Irish pub and a Victorian bistro, with antique fireplaces, marble statues, and artifacts from all over hanging on the walls. It touts the city’s longest bar at 118.5 feet, so you have plenty of room to hug the bar and flag the bartender down for a drink without rubbing elbows with too many other people. The food and drinks menu is just as impressive, with over 300 types of whiskey, literary-themed cocktails, and different types of cuisine.

Several neighborhoods in the Bronx were inhabited (and continue to be!) by early Irish immigrants, and their influence can still be seen today. Rambling House is one such example and a perfect place to grab a pint or two — especially after exploring Van Cortlandt, one of New York City’s biggest parks. The menu is Irish-American, with food like shepherd’s pie, corned beef and cabbage, and steak and eggs. Also on offer are karaoke and pub quiz nights, where you can belt your heart out or win some prizes. Rambling House also gives back to the music community via spotlights on different artists; local acoustic bands play on Tuesdays, DJs on Thursdays and Fridays, and rock, pop, and dance bands on the weekends. Time it right and you can get well-priced drinks, dinner, and a show.