The bulk of travelers to Scotland tend to focus their energy on a pretty narrow segment of what the country actually has to offer. You can easily spend a few weeks exploring the cobbled streets of Edinburgh, shopping in Glasgow, visiting castles in the Highlands, and working up the courage to try blood pudding, but there’s more to Scotland than the mainland. For a truly unique Scottish adventure, you have to check out the islands. From the Isle of Arran just west of Glasgow to the Island of Lewis and Harris in the far north, these islands will show you a side of Scotland you never knew existed. Here’s how to plan your epic island-hopping adventure. 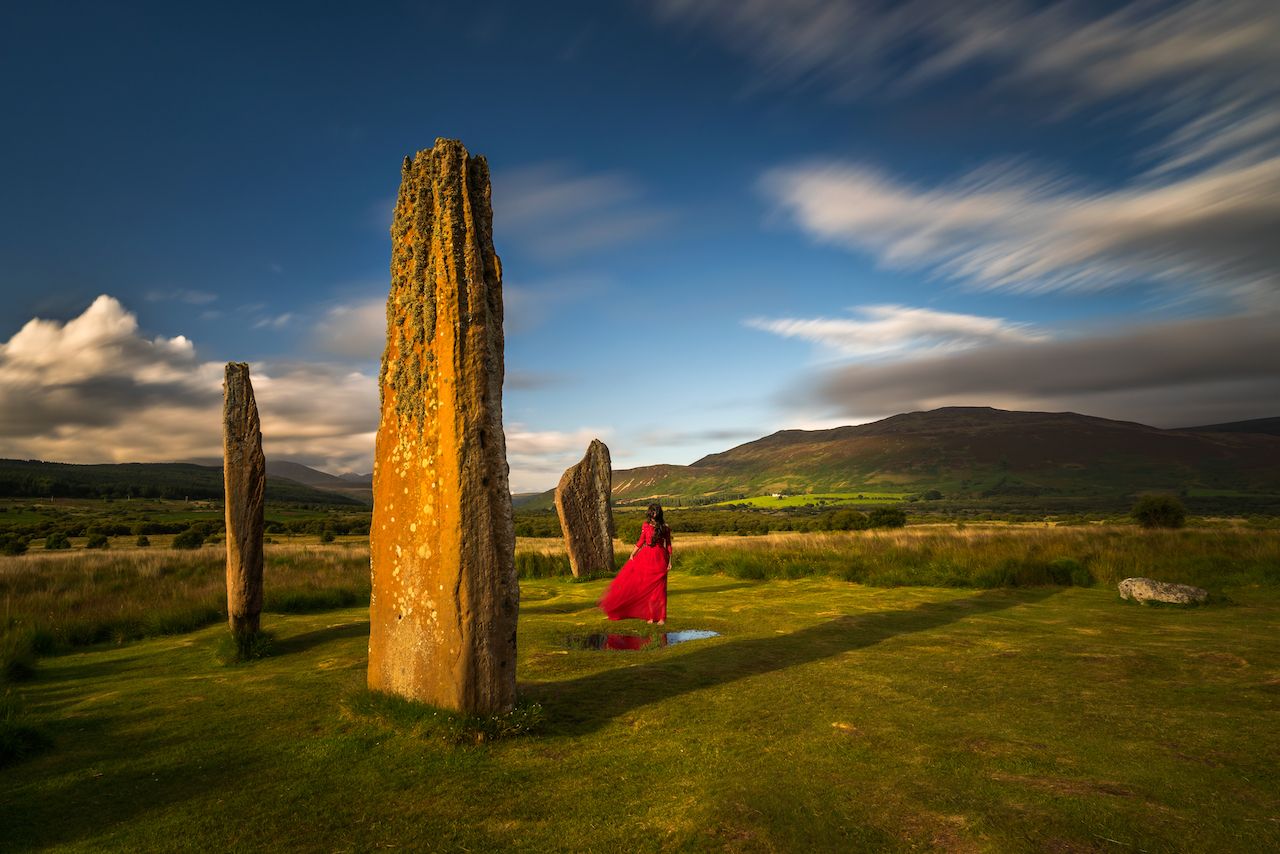 The best way to conveniently hit as many Scottish islands as possible is by starting from the south and working your way up. This means beginning your journey at Ardrossan Harbour, just under an hour’s drive west from Glasgow. The crossing is served by the MV Caledonian Isles ferry, which you’re welcome to board with either a vehicle or as a passenger on foot. In under an hour, the ferry brings you to Brodick, the main town on the Isle of Arran, and it’s the perfect base from which to explore the incredibly diverse landscape.

Brodick Castle is a good place to start. Just a 10-minute drive north of town, the castle has stood since 1510 and was previously the home of the Dukes of Hamilton. Now, you can wander the grounds and explore its waterfalls, woods, and walled garden. Continuing your northward journey from Brodick, outdoor enthusiasts should be sure to check out Goat Fell, the island’s highest point at 2,866 feet. This rugged mountain is replete with jagged ridges and summits offering spectacular views of both the sea and the rest of the island. And if you’re really adventurous, you can take the Arran Coastal Way, a self-guided hiking trail that starts in Brodick and stretches across the island’s entire coastline.

You can’t leave Arran without visiting the Machrie Moor standing stones, perhaps the island’s most famous feature. Located on the western edge of the island, yet still only 20 minutes from Brodick, the circles are a collection of six ancient stone circles dating back to 3,500 BC. Think Stonehenge, but without hundreds of tourists clamoring for the same exact sunset photo. 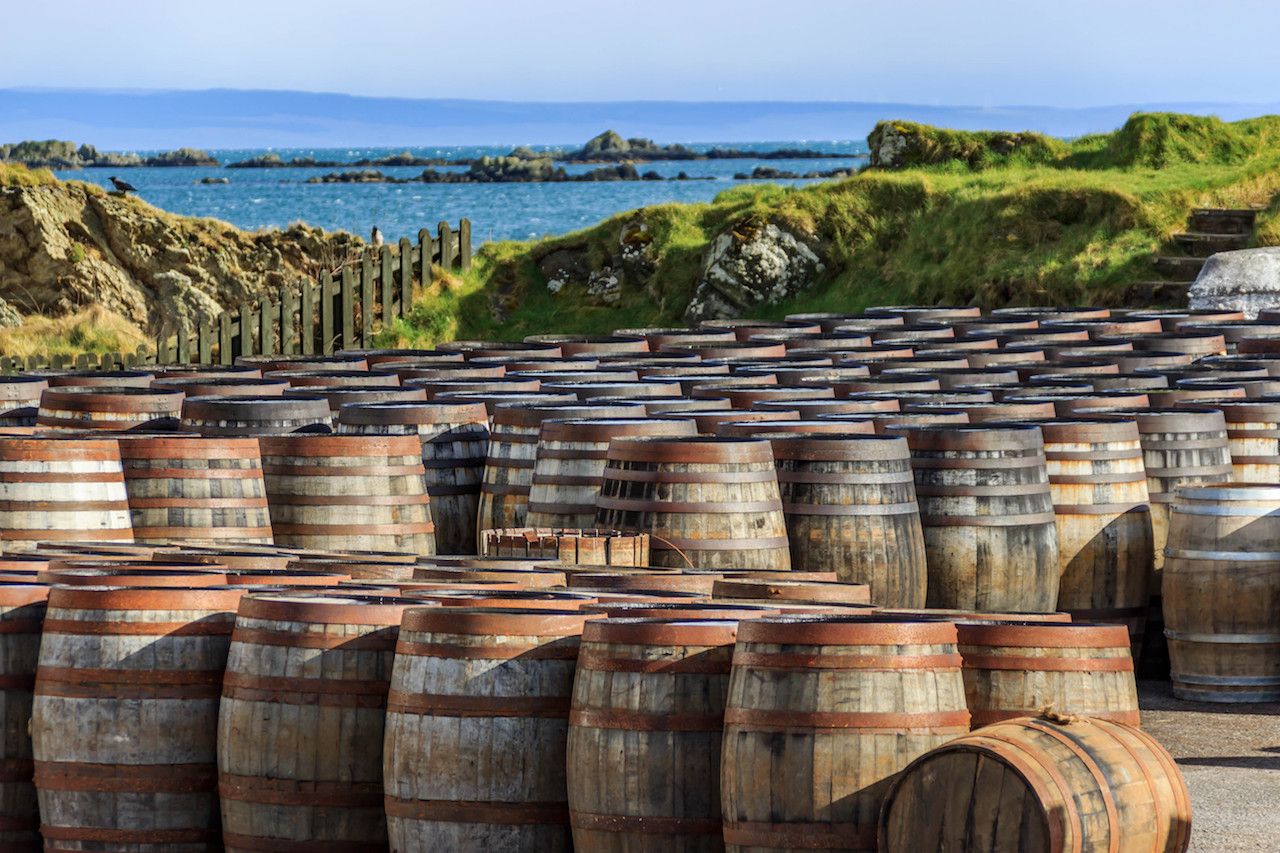 Islay is an island north of Arran famous for its whisky — it’s known as “whisky island” — and there are a few ways to get there. You can drive west from Glasgow to Kennacraig, where you can catch a ferry to Islay, but if you’re coming from Arran, take a ferry from the northern town of Lochranza to Claonaig, drive from Claonaig to Kennecraig, and then take the ferry to Port Askaig on Islay. It might sound like a hassle, but it’ll give you the chance to get intimately acquainted with Scotland’s ferry system, as well as some pretty remote roads few tourists ever travel.

Saying that Islay has some of the best beaches in Scotland might not sound like a towering achievement, but the island does have some beautiful stretches of white sand. A 25-minute drive from the town of Bowmore, Kilchoman Beach is a perfect place to watch the sunset over the Atlantic. There’s also the smaller Saligo Bay, Kintra Beach, and the east-facing Kilnaughton Beach if you’re an early riser.

Islay may only have 3,000 residents, but they take their whisky seriously. There are a total of nine working distilleries on the island, with the first founded in 1779. The nine are spread all across the island, but if you’re trying to visit as many as you can in a short period of time, your best bet is heading to the south coast. The Ardbeg, Lagavulin, and Laphroaig distilleries are right next to each other, and easily accessible from Port Ellen. All of the island’s distilleries offer tours, so you can sample the best of “whisky island” no matter which distillery you choose to visit. 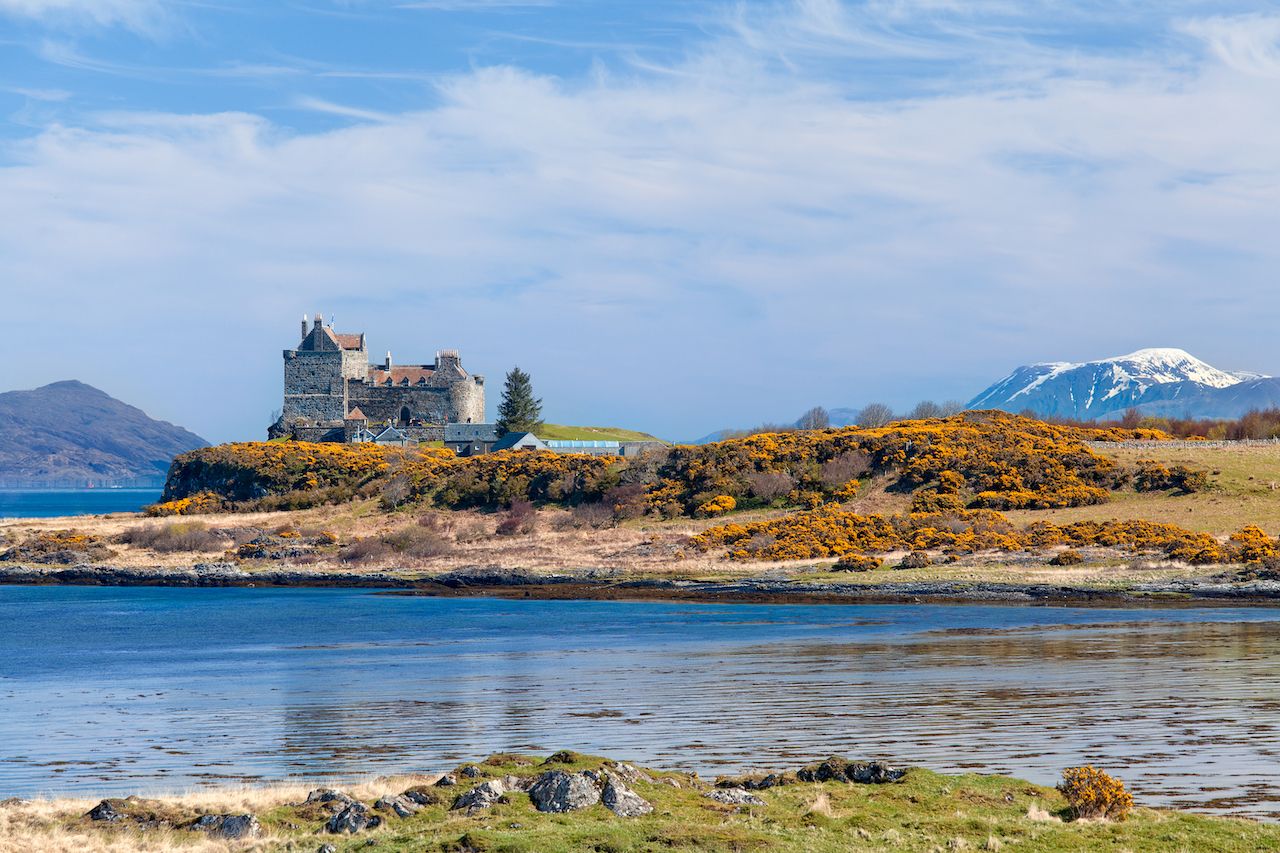 The Isle of Mull is one of Scotland’s most famous islands, and the easiest way to get there is by ferry from Oban, which only takes 45 minutes. There is no direct ferry from Islay to Mull, so your island-hopping will have to take a brief detour through the mainland before continuing your journey north. Once you’re there, though, you’ll see that it was worth the effort. With beaches, castles, distilleries, 300 miles of coastline, and plenty of history, Mull is one of the most diverse islands in the UK.

You’ll want to start exploring Mull from the town of Tobermory, which is known for its painted houses along the waterfront. Take the Bruce Trail along the Niagara Escarpment. It stretches pretty far along the coast, but it’s perfect for getting acquainted with the island and its natural scenery. And if you didn’t get enough whisky on Islay, you can head to the Tobermory Distillery, dating back to 1798, before venturing out to explore the rest of the island.

Duart Castle, about 45 minutes west of Tobermory, is the most dramatic castle on Mull. Built around the 13th century, it’s perched on a promontory over the sea, and visitors can now take a tour of the property that includes the tearoom, which offers seasonal fare. You might even recognize the castle from movies like Entrapment, When Eight Bells Toll, and I Know Where I’m Going.

If you’ve traveled through the Highlands, you might think the only animals in Scotland are Highland ponies and sheep. A visit to Mull, however, will quickly show you the light. Mull is one of the best places in the UK for seeing otters and white-tailed sea eagles, as well as red deer, seals, and whales. It’s a premier destination for bird watchers, and there are several boat and walking tours led by local guides to ensure you don’t miss any of the island’s native wildlife.

Mull is also often used as a jumping off point for visiting Iona, a small island only a four-minute ferry ride away from Fionnphort. Famous for its abbey, where dozens of former Scottish, Norwegian, and Irish kings are buried, the small island makes a perfect day trip. 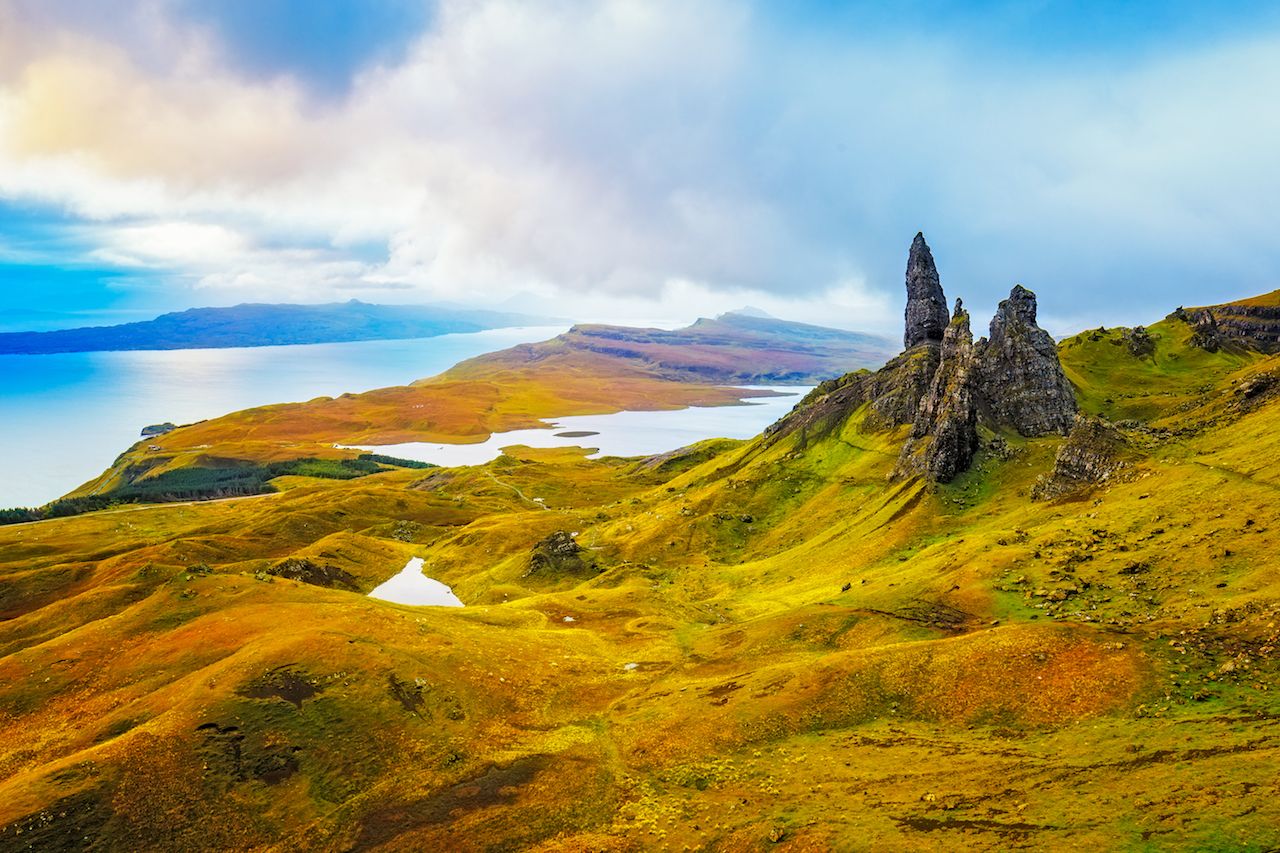 Many believe that the Isle of Skye is Scotland’s most breathtaking destination, and not without reason. From ancient rock formations to sweeping ocean vistas and fairy tale-esque pools, Skye has it all. Getting there from Mull would require too many ferries and transfers to be feasible, so you should probably return to the mainland and take the scenic coastal route to Mallaig, where you can catch a ferry to Skye. You can also take the slightly longer route and eliminate ferries from the equation entirely, passing alongside Fort Augustus and Loch Ness before cutting back west toward Skye and crossing the Skye bridge.

Under an hour away from the bridge is Portree, the largest town on Skye, and if you’re spending a few days on Skye — as you definitely should — you’ll probably be using it as your base. The town is perfectly located for seeing everything the island has to offer. Just 13 minutes north of town, you can visit the Old Man of Storr, a set of jagged, iconic rock formations formed by an ancient landslide. If you’ve ever searched for pictures of Skye, it’s pretty much all about the Old Man of Storr. The full 2.3-mile hike through the area takes you past it and other rock formations, as well as over rolling green hills.

After you’ve spent some time exploring the rocks, head to the Fairy Pools, half an hour south of Portree. These magical pools at the foot of the Black Cuillins mountain range are famous for their mini-waterfalls and mystical character. There’s a 1.5-mile, 40-minute hike to access the pools, and you can even go swimming in them if you feel so inclined. 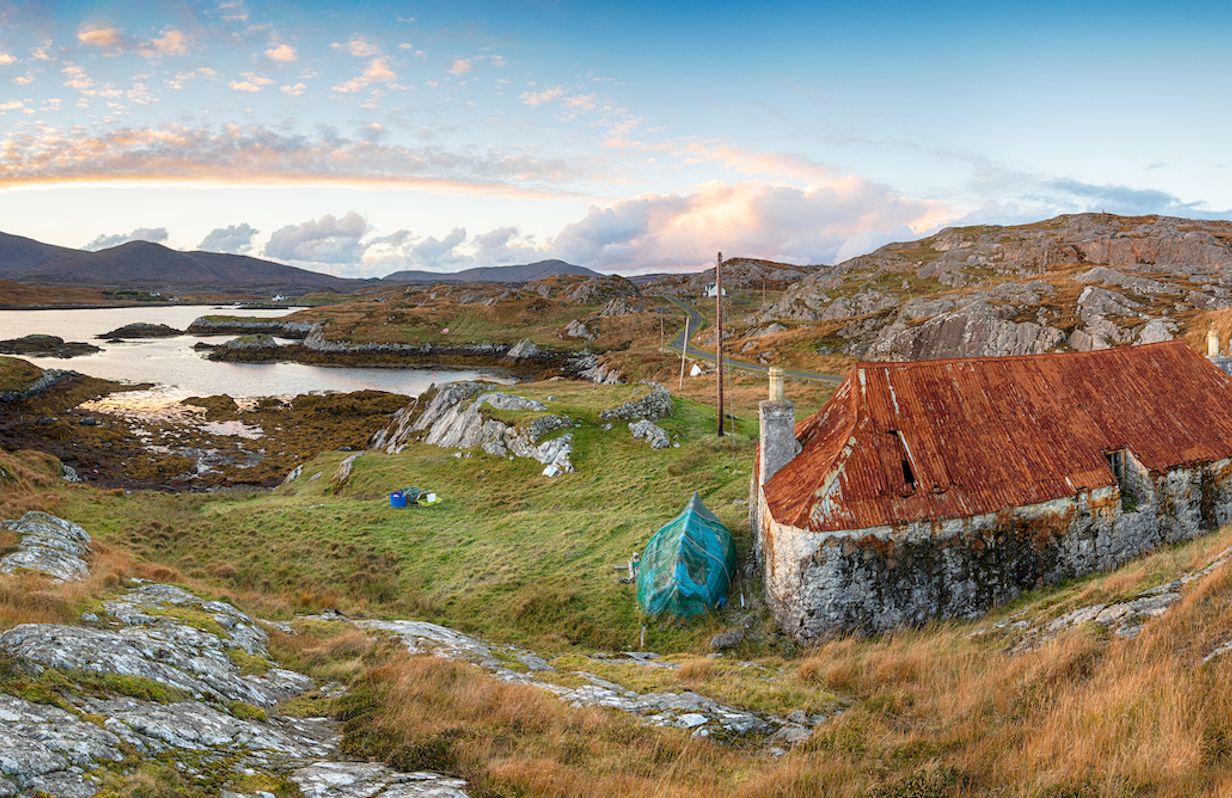 Unlike Skye, there’s no way to access Lewis and Harris island except by ferry, so getting there is pretty straightforward. Just take the ferry from Uig in northern Skye to Tarbert on Lewis and Harris, which takes about two hours. While it might sound like two separate islands, it’s actually two parts of the same island.

Once in Tarbert, your eye will immediately be drawn to the ruins of Tarbert Castle overlooking the harbor. Rebuilt in the 14th century by Robert the Bruce, the castle is a great hiking destination, with signposted footpaths leading up to the ruins alongside Loch Fyne Gallery. If you want to spend more time around town before exploring the rest of the island, charter a morning ferry to Handa Island, which is home to over 250 pairs of puffins, as well as otters, dolphins, minke whales, pilot whales, porpoises, orcas, and sharks.

Once you’ve finished in Tarbert, it’s time to drive an hour south to the Calanais Standing Stones. If you didn’t get enough stone circles on the Isle of Arran, Lewis and Harris will certainly quench your thirst. Placed on a ridge above Loch Roag, these stones have been standing for over 9,000 years, but no one is entirely sure why they were constructed or the significance of the circular formation.

For more Scottish island history, head over to Gearrannan Blackhouse Village just under 20 minutes north of the stones. These nine coastal cottages have been restored to resemble the original croft houses Scottish islanders once lived in, and you can even rent the dwellings out for yourself. Spending a night in these traditional cottages, located within easy walking distance of Dalmore and Dalbeg beaches, is the perfect way to cap off your Scottish island adventure.

Road TripsHow To Plan an Epic Road Trip Through the Scottish Highlands
Tagged
Beaches and Islands Trip Planning Scotland
What did you think of this story?
Meh
Good
Awesome

Can You Guess What These Funny Scottish Slang Phrases Mean?
This Guide To Scottish Sayings and Slang Will Have You Drinking With the Locals in No Time