Those of us in the Lower 48 may think of glaciers as remote, exotic formations that require overnighting at an alpine base camp in order to be seen. But residents on the north side of Juneau, in southeast Alaska, can just look out at the 13-mile-long Mendenhall Glacier over their morning coffee. In fact, Juneau’s city bus takes you right to the glacier’s visitor center.

Although roughly 6,000 people stream off cruise ships into Juneau daily from May to September, most of them cluster by the docks, with their nearby t-shirt shops and tourist kiosks. They miss the quiet streets that creep up the steep slopes away from the water, where the atmosphere resembles any trendy Pacific Northwest neighborhood — complete with craft distilleries, seafood restaurants, and stylish coffee shops. 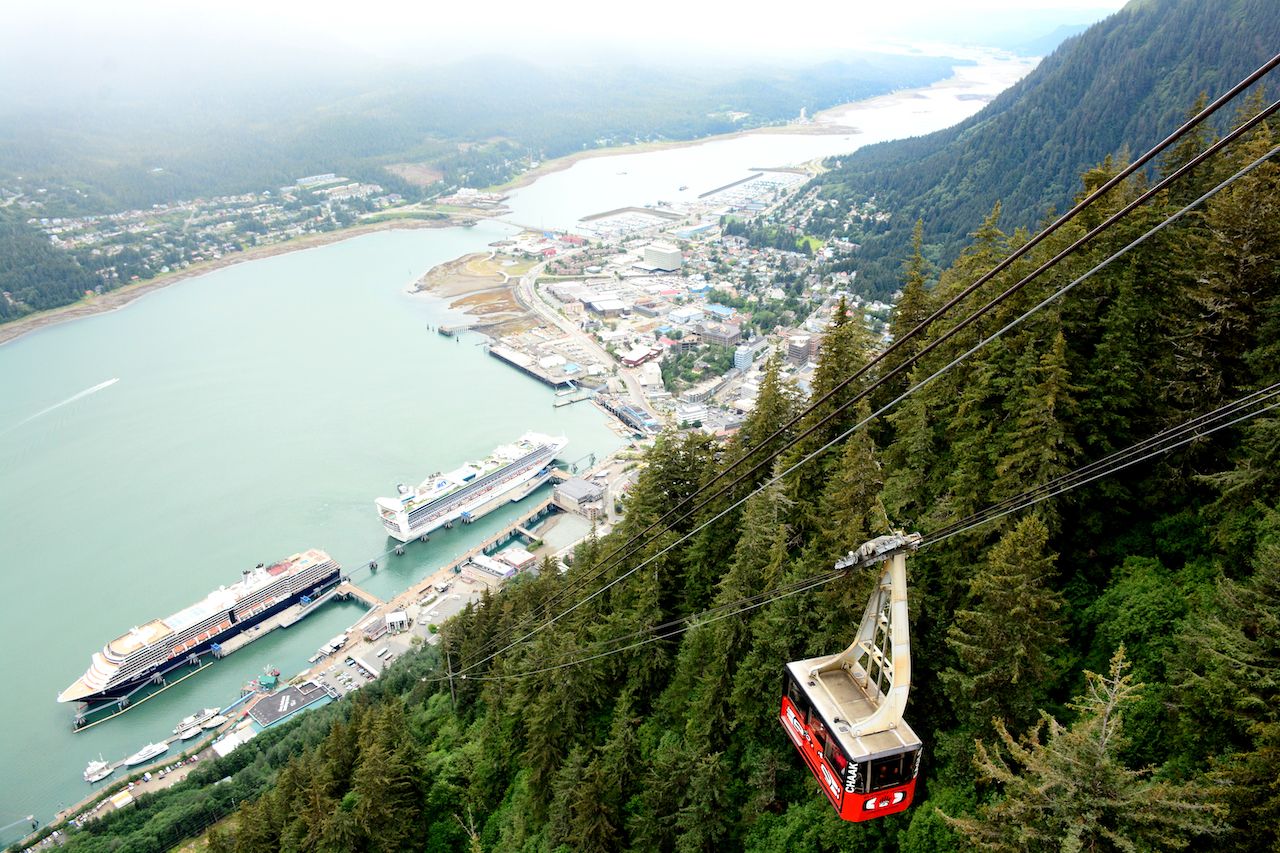 Juneau lies on the thin, coastal stretch of Alaska that juts south from the rest of the state and abuts the northern edge of Canada’s British Columbia province. The buffer islands between Juneau and the open waters of the Gulf of Alaska protect it from the harshest ocean swells and add to the stunning view. In recent years, the city has shed its image as merely a sleepy state capital and has embraced its outdoors bona fides. And, thanks to a landscape seemingly tailor-made for Instagram — all obsidian waves and glacier-carved glens — Juneau will strike visitors as a close-by version of Iceland or New Zealand.

To orient yourself, you can board the Mount Roberts Tramway for aerial views of the city. The only such tramway in southeast Alaska, the tram rises 1,800 feet from the cruise ship dock in downtown Juneau through the rainforest to the Mountain House, offering expansive views of Juneau and Gastineau Channel.

From up here, the cruise ships looked like pieces arranged on a Battleship board and offered a contrast with my mode of conveyance: one small, intimate, and ethereal, the other massive, a floating city implacably — and from this distance, imperceptibly — moving across the ocean.

Juneau is the second-largest city in the United States by land area. In reality, Juneau is not connected to the rest of the state by pavement. You can drive the city’s road system in about a half-hour. Once you hit the end of the road, transportation here takes the form of puddle-jumping passenger jets, helicopters, floatplanes, ferries… and dog sleds.

Dog sledding in the summer 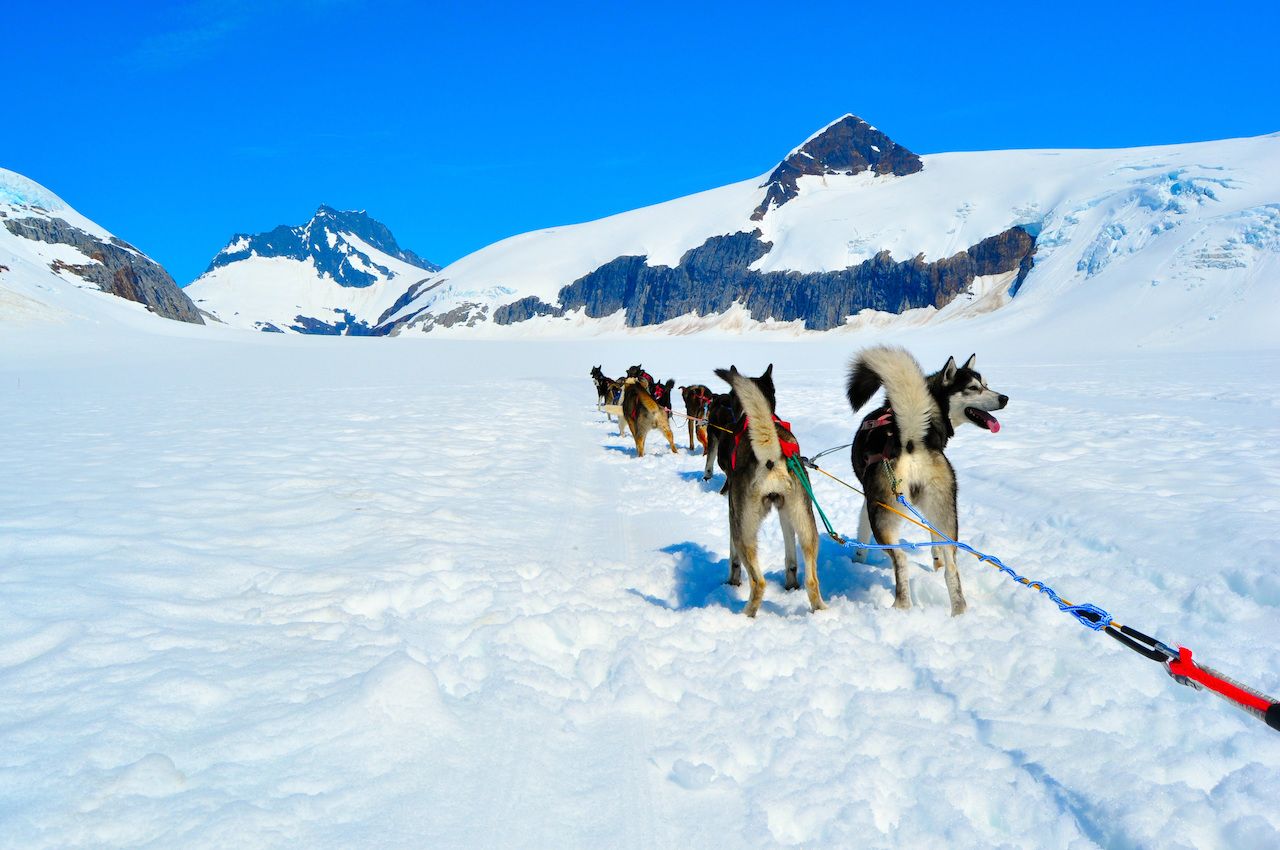 I had come for those dog sleds. In the thick of a smoky, hot summer in the Lower 48, the 1,500-square-mile cooler known as the Juneau Icefield promised relief. And a trip with Alaska Icefield Expeditions to the summer dog-sledding camps on the icefield promised a unique way to experience it.

A small helicopter took me and a handful of other dogsled participants from Juneau International Airport. Under high summer clouds, we quickly ascended out of town. Although the peaks immediately surrounding the city only top out at around four thousand feet, they rise from sea level to subalpine in a matter of minutes. Below us stretched impossibly green alpine tundra, snowmelt-swollen creeks sluiced through steep hanging valleys.

Fewer than 20 minutes later, we stepped off the helicopter and onto the doorstep of a tent village.

There’s no off-season for sled dogs. When the tundra thaws in the summer, Iditarod- and Yukon Quest-winning Alaskan mushers move their packs to train on the Juneau Icefield, a large ice mass from which about 30 glaciers flow. (Two of these, Mendenhall and Lemon Creek, are visible from the local road system.)

It’s one of the continent’s only summer sledding locations. It’s also one of the few places that the layperson can experience the high-speed, husky-fueled action of an Iditarod competitor without the dead-of-winter discomfort of mushing’s high season.

Here in the base camp, guests huddled around husky pups while mushers mingled among them answering questions about the dogs, pointing out this or that husky’s personality traits and position in the pack.

Sated with puppy snuggles, we climbed aboard the dog sleds for a spin around the icefield. The sled runners thrummed with the pent-up energy of a dozen Alaskan huskies. At the “Hup!” of the musher, the sled snapped into movement before settling into a steady rhythm. Jagged spires of rock, stained dark with snowmelt, passed by as we cruised the gradual downslope of the icefield. But for the pleasant temperatures, we could have been in the thick of the Iditarod. 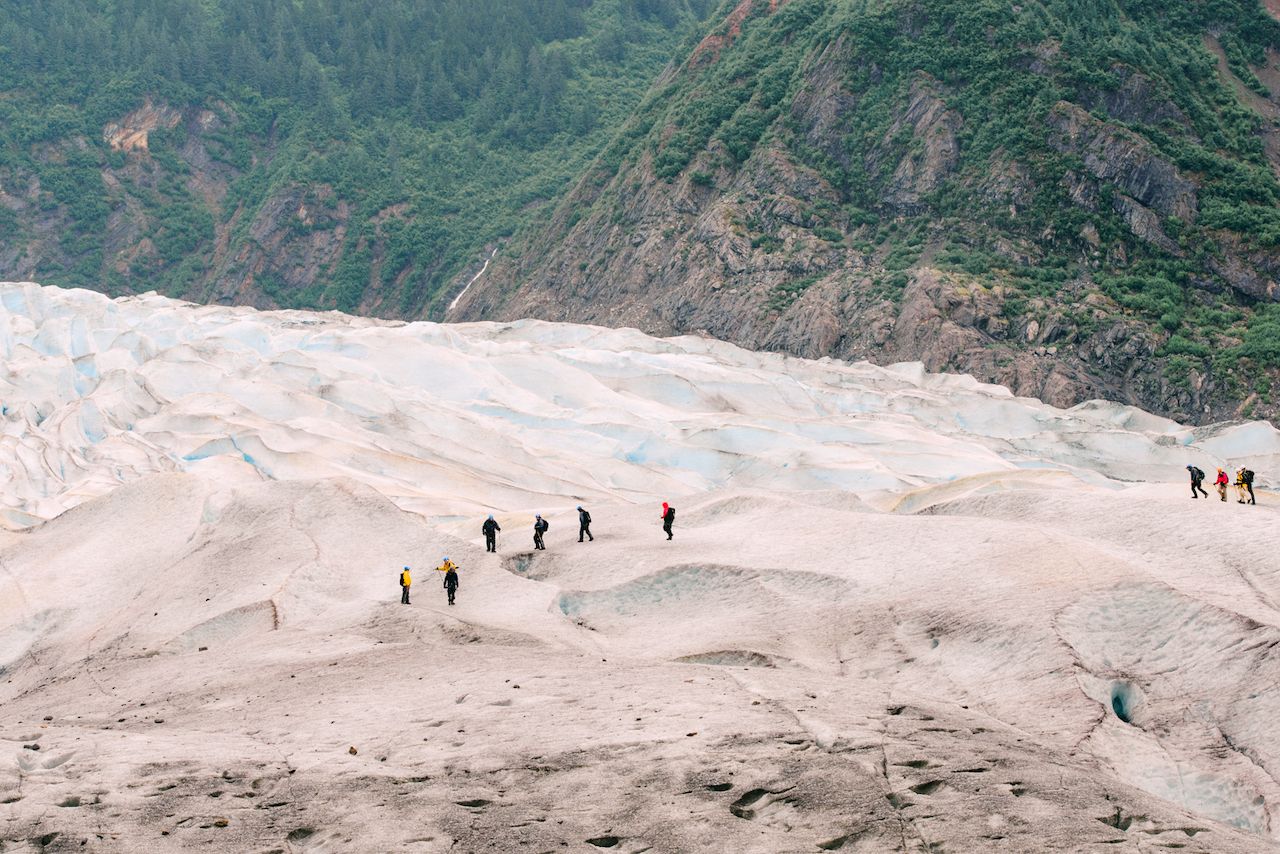 No trip to Juneau is complete without exploring its glaciers. On my final full day in town, I took advantage of perhaps the best way of exploring the area: with a pair of hiking boots.

I joined a guided trip with Above and Beyond Alaska on the West Glacier Trail, a strenuous seven-mile, round-trip hike to the ice caves at the toe of Mendenhall Glacier. Its proximity to town makes Mendenhall Glacier an appealing day hike, one of a score in the fjords and old-growth forests of the Juneau area. (Because of the potential instability of the ice caves as they gradually thaw and thin throughout the summer, it’s wise to visit them with a guide who can suss out their stability before entering.)

After getting our group equipped with crampons, climbing harnesses, and helmets in the parking lot, our guides navigated the braided, sometimes boggy, network of footpaths that trace the west shore of Mendenhall Lake.

Shouldering aside the alder branches, we climbed the bare bedrock above the lake, long grooves in the rock evidence of the glacier’s grinding advance millennia ago. Markers along the trail show the glacier’s retreat, which has accelerated in recent decades. 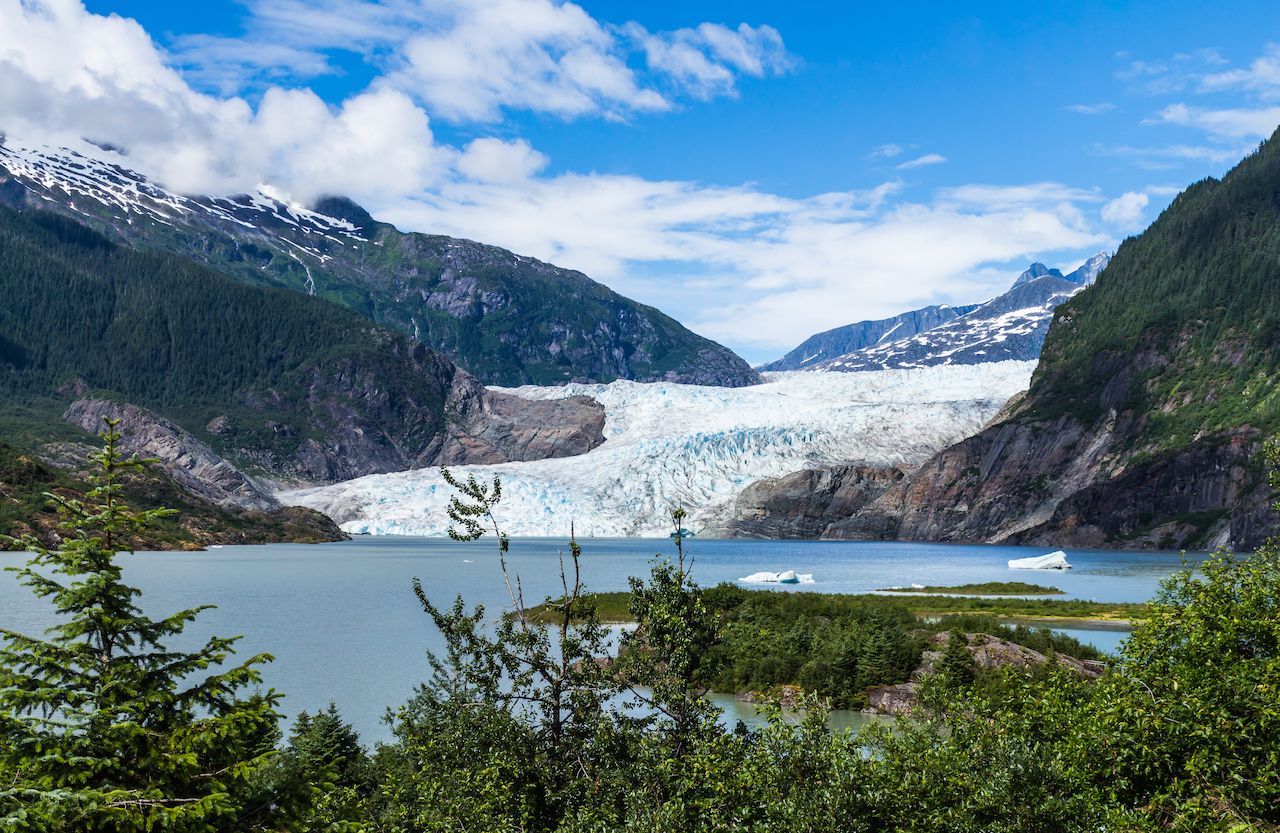 Here we had our first glimpse of the scalloped and sun-cupped toe of the glacier, shepherded into the valley by a quartet of peaks: McGinnis Mountain, Mount Stroller White, Mount Wrather, and Bullard Mountain. Below us, kayakers plied the lake, its green hue a result of flecks of minerals mixed into the water from the melting ice.

Reaching the mouth of the ice caves, we donned helmets while our guides probed the cave walls. Given the all-clear, we stepped into another world. Just above our heads, opaque waves of ice let in a pale light that illuminated the meltwater creek at our feet. Our guides pointed out the diminished form of the wall of an early-summer ice cave, noting that the cave in which we were standing would likely be gone by the end of summer; on this mid-August day only a few frozen foundation pieces remained, these due to disappear by September.

Back outside the caves, we cinched tight our crampons before kick-stepping our way onto the surface of the glacier. Here, between a moody sky mirrored in the blue-white expanse of ice, we looked upon a landscape both implacable and impermanent. The glacier on which we stood had carved the valley before us, scooping a lake out of its surface. But it also created the delicate ice caves that welcomed visitors for only a few short months each summer. In the distance, Alaska’s capital bustled.

Road TripsHow To Road Trip From Anchorage To Denali, Even in Winter
Tagged
Outdoor National Parks Insider Guides
What did you think of this story?
Meh
Good
Awesome

Paddling To the Mendenhall Glacier

Guide To Beer Drinking in Alaska

Is Juneau, AK Really Just a Little Drinking Town With a Fishing Problem?

Where To Find Glaciers in the Northern Hemisphere