The smiling mug of Colonel Sanders is a familiar face across Asia, from Bangkok to Beijing, and everywhere in between. But how did KFC become so popular, even more popular than the poster child for globalization, McDonald’s? The answer is multi-faceted and stems largely from the company’s keen ability to be in the right place at the right time.

Kentucky Fried Chicken has more than 5,600 locations in China alone, making it by far the most dominant American fast-food chain in the country. According to Business Insider, KFC holds 11.6 percent of the fast-food market in China — double that of McDonald’s and lightyears ahead of any other US-based chain.

There was an initial allure to eating Western food that came about when China opened up to foreign investment in the mid-1980s. Eating American food became kind of like taking a mini-tour of the United States itself. KFC was there early on to capitalize on the new market and that Western-food desire in all its greasy glory.

When KFC first opened in Beijing in 1987, it was widely viewed as a step forward in China’s opening up to the world. For many Chinese, KFC was their first taste of American culture right when the country first allowed bits and pieces of outside influence to creep in. This reaction was replicated over and over again at a rapid rate — at one point in the 2010s, KFC opened a new location in China every 18 hours — as the company expanded across the country. Residents were so excited at the opening of a KFC store there that they welcomed the restaurant with a full-scale parade, floats and all.

“KFC was seen as epitomizing western living,” says John Christen, an educator from Colorado who taught English in Yongji, a county-level city of about 450,000 people in Shanxi Province. “A bowl of noodles from the local restaurant may have been six yuan, or a dollar, and a KFC meal maybe 35 yuan, or six bucks. So the thinking is, ‘If I can afford the food, I am rich like an American.’ There is a big push for middle-class families to have the luxuries of the West. It’s all in an attempt to live like an American.”

To cater to local tastes, some KFC locations offer localized menu items in addition to the classic bucket. In China, for example, you might find a take on one of KFC’s most classic options, the Twister, spiced up with cucumbers, scallions, and duck sauce and re-dubbed the Dragon Twister. There’s also the Tender Beef Pentagon, which resembles Taco Bell’s Crunch Wrap Supreme. Chicken biryani is on the menu in Sri Lanka, and Thailand stores sell a shrimp donut.

The Original Recipe fried chicken remains the top seller, though, and even as the novelty of eating American fast wood waned, KFC stores remain packed — KFC did nearly $5 billion in sales in China alone throughout 2018. KFC’s parent company Yum Brands, which also owns Taco Bell and Pizza Hut, has in the past made more than 40 percent of its total profit in China, led in large part by KFC. That’s some serious dough and batter. 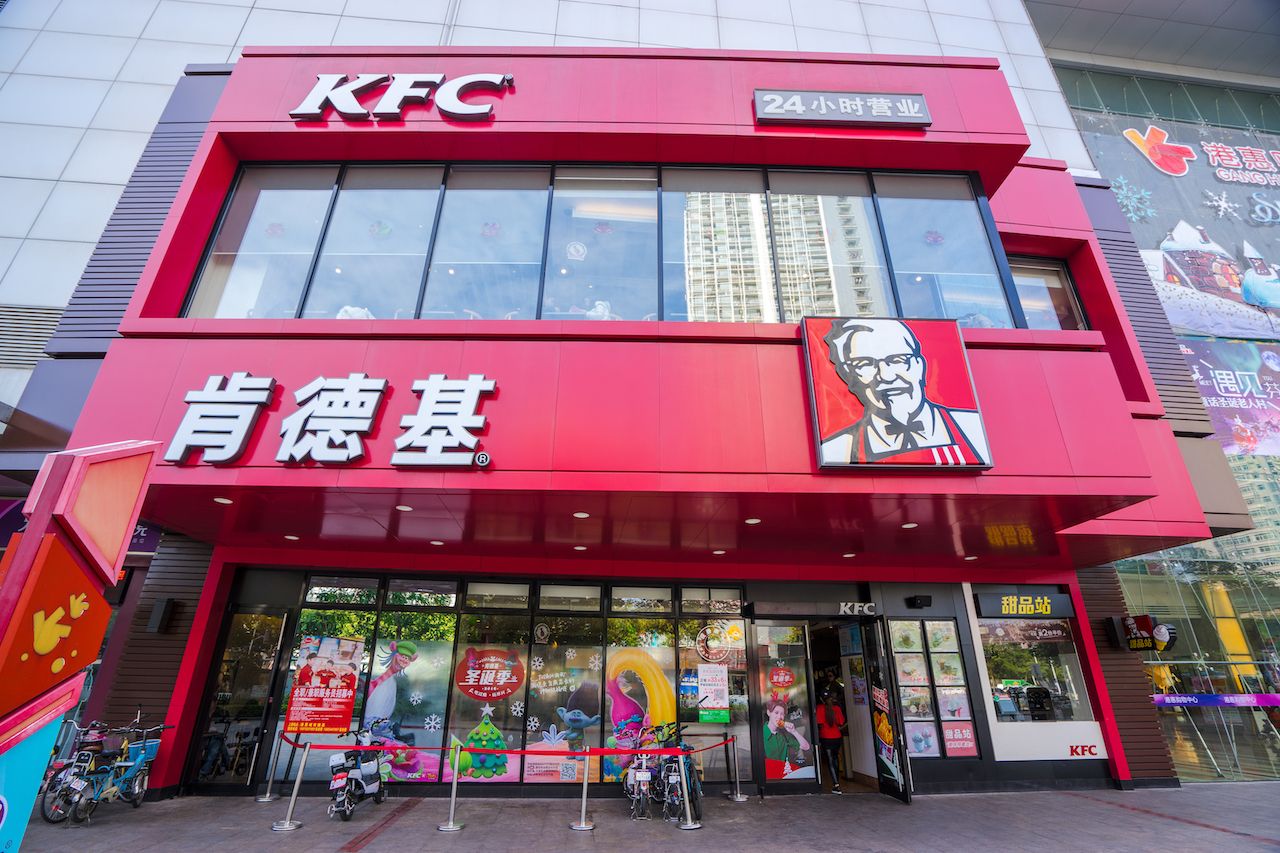 It isn’t just the appeal of Western food that keeps KFC thriving. Unless you’re vegan, vegetarian, or pescatarian, chicken is likely on the approved list for your diet — including for religious diet restrictions. While Muslims don’t eat pork and non-vegetarian Hindus don’t eat beef, pretty much all of the world’s major religions allow consumption of chicken. That makes KFC a more accommodating choice than, say, Burger King.

According to Cornell University Library, more than 60 percent of the world’s 1.57 billion Muslims live in Asia. In Indonesia, the world’s largest Muslim-majority nation, KFC has over 400 locations, primarily in bigger cities where residents commute to and from work. When it comes to buckets of fried chicken, KFC is convenient for pretty much everyone.

The formula there is nothing new — the Colonel is there when and where you need him, and the pick-up-and-go strategy has worked out nearly as well for them across the Pacific as it has back home. The Bangkok Post reported that the company hopes to open its 1,000th location in Thailand in 2020, and the food blog Fast Food Menu Prices clocks another 640 KFC restaurants across India and the rest of Southeast Asia.

In Japan, the convenience also stretches to holidays. Since the run of a popular 1974 advertisement declaring Kurisumasu ni wa kentakkii (Kentucky for Christmas), KFC has been a staple for Japanese Christmas dinners.

In areas like Macau, an autonomous region of China that doesn’t have widespread religious dietary restrictions, breaded and fried chicken has been an easier sell than other Western foods.

“People here don’t like burgers, but they still want American fast food,” said Ken Chi Hou Lee, a Local Guide with Macau Government Tourism. “KFC provides that greasy fix without having to eat a burger, and that’s a big part of why people in Macau love it.”

Even after all these years, KFC’s allure endures. 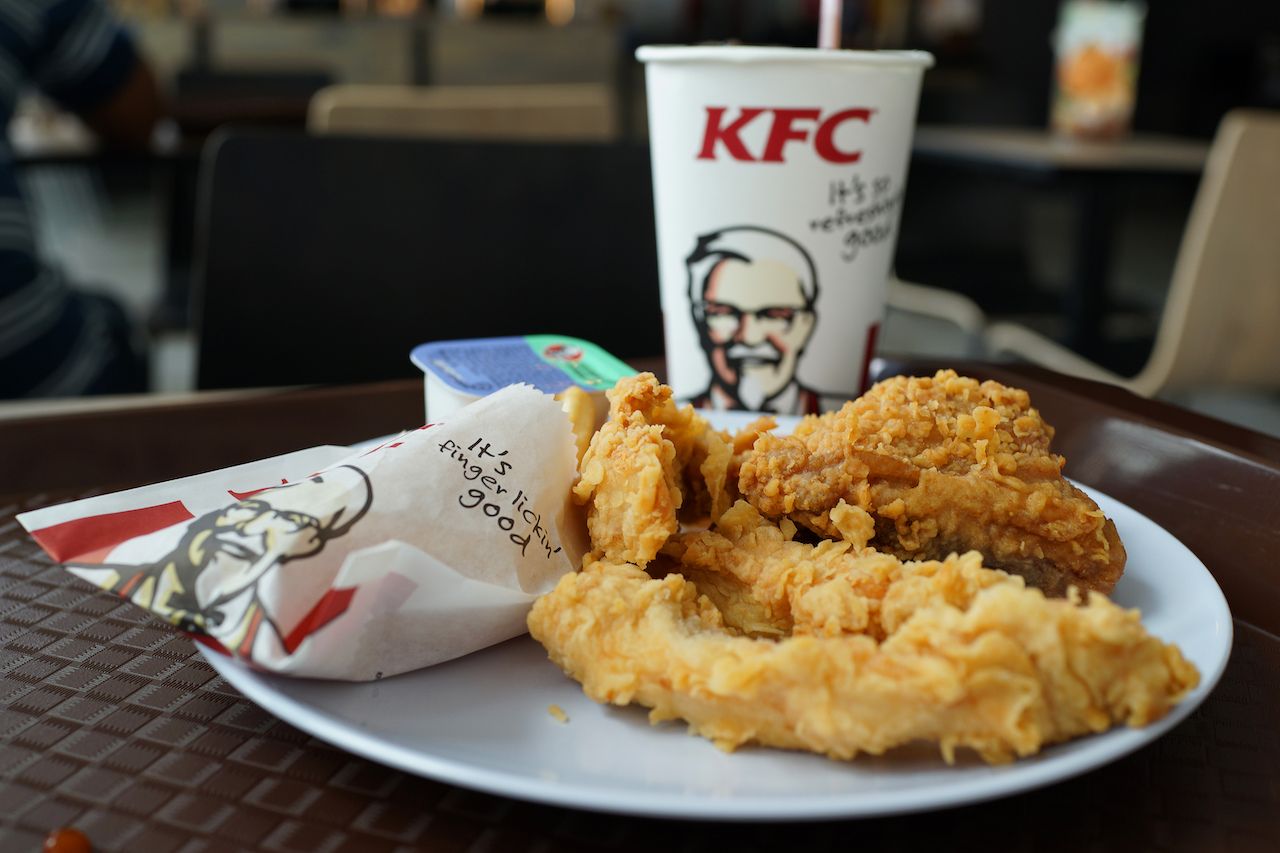 Just like in the United States, the appeal of KFC in Asia also comes down to something simple: It tastes really damn good. The Colonel’s secret herbs and spices recipe gives KFC an air of mystery while also being straight-up addictive. Cooks in China, Thailand, Indonesia, and everywhere else have had just as little luck cracking the secret recipe as Americans have. It’s unlikely the secret will spill anytime soon, either — the recipe remains locked inside a vault somewhere in Louisville, and the spice mix itself is blended by two different companies so as not to make the full ingredient list available to anyone. As the company continues to expand across the world’s most populous continent, one thing remains clear: Fried chicken’s popularity shows no signs of kicking the bucket.

NewsA KFC in Australia Is Campaigning for a Michelin Star
Tagged
Culture Food + Drink Restaurants + Bars
What did you think of this story?
Meh
Good
Awesome