If the thought of an eerie walk through hundreds of thousands of crosses, pegged haphazardly into the ground on an ominous hilltop in rural Lithuania, hits the perfect amount of macabre for your Halloween bucket list, you’re in for a treat.

Lithuania’s Hill of Crosses may be creepy, but it has been an important pilgrimage site for more than 150 years. Over its history, it has been a controversial destination and has faced frequent demolitions by Soviet forces, who suppressed all forms of religion. But since the country’s independence in 1990, the hill is here to stay, and it’s currently seeing reinvigoration as a popular dark tourism site that’s equal parts enthralling and chilling. 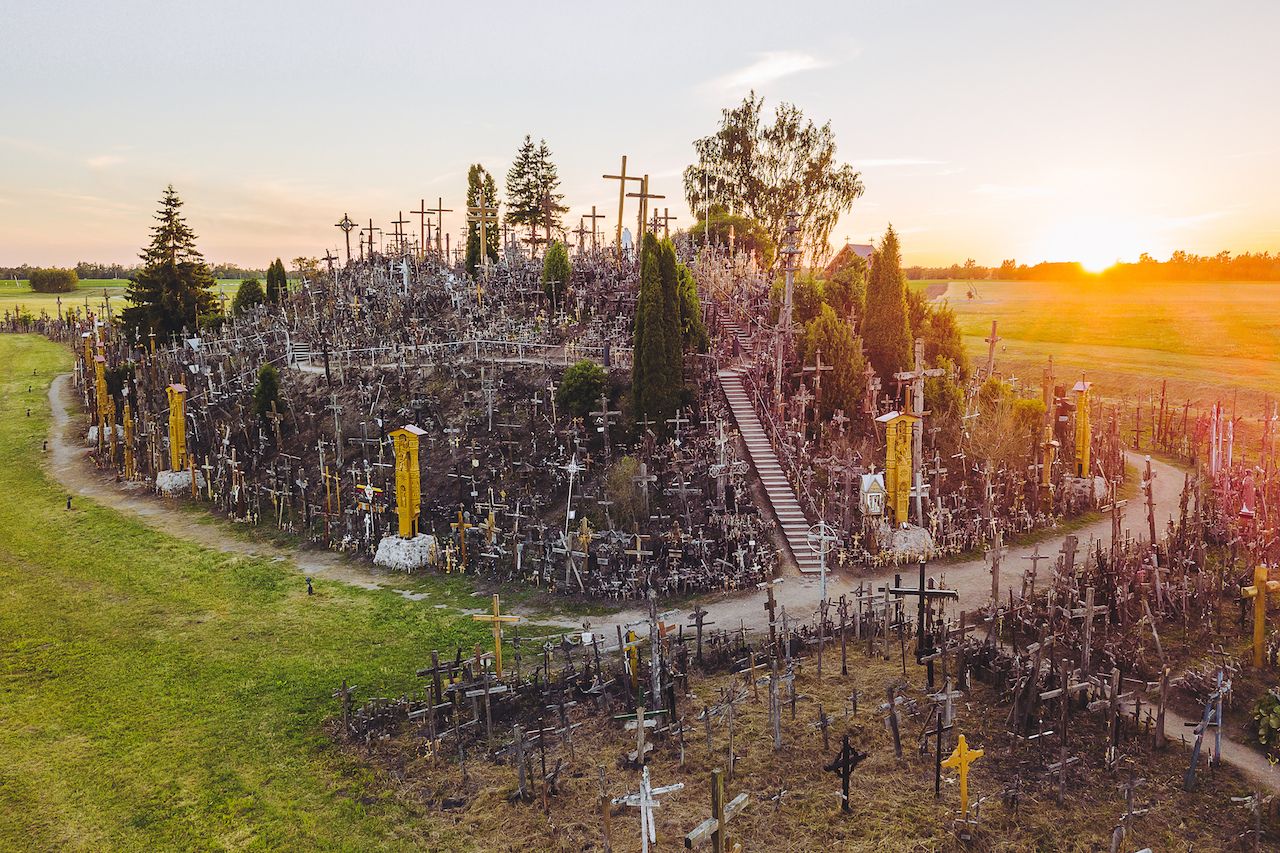 The hill, north of the city of Šiauliai, has been a sacred place for residents of Lithuania since the devastating battles in 1831 against the Russian Empire. Known as the November Uprising, the battles resulted in extensive casualties for Lithuania. As a tribute to those who died, relatives started leaving crosses on the unassuming hill. 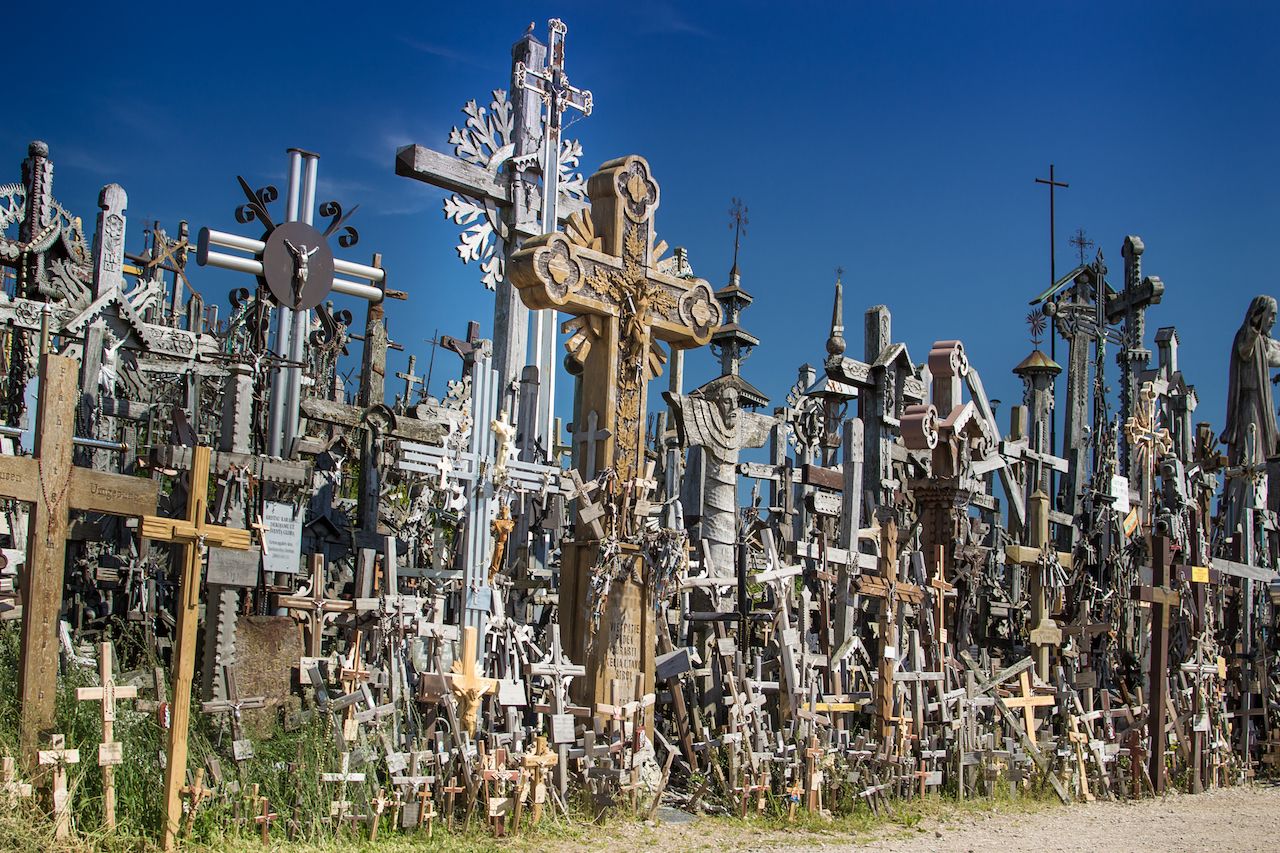 What began as a trickle of mourners soon turned into a flood of crosses and pilgrims. But it wasn’t until 1850 that the hill, known as Jurgaičiai, was renamed the Hill of Crosses.

When Tsarist authorities outlawed similar crosses on roadsides and in cemeteries in 1863 as part of their general rejection of religion and religious symbols, many traveled to the hill to erect their memorials as a show of defiance and determination.

With the new name and a ban on public crosses, the hill became inundated with new installations — though many saw it as a dangerous and forbidden destination, particularly during the periods of Soviet rule.

The Hill of Crosses has been the subject of frequent raids and demolitions at the hands of Soviet authorities. In 1961, a late-night operation saw all the crosses bulldozed down the hill. Wooden crosses were burnt on the site, concrete structures were crushed, and any metal was salvaged as scrap or melted down, leaving the hill bare.

But determined pilgrims returned soon after with new crosses, and authorities removed them at least four more times. So fervent were the rebuilds that eventually the demolitions ceased, and the cross-covered hill inadvertently became a symbol of hope and perseverance. 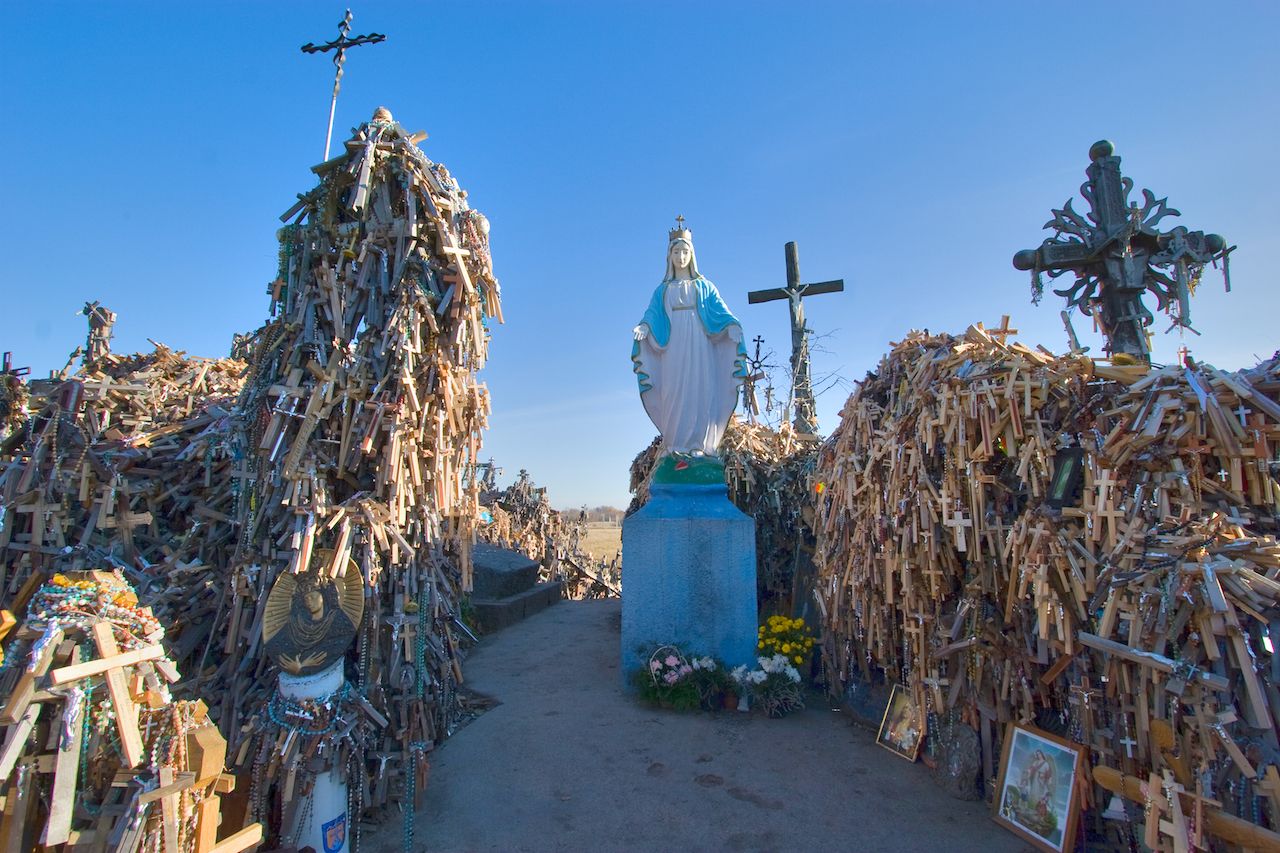 Today there are an estimated 100,000 densely-packed crosses on the small hill, a number that continues to climb ever since Lithuania achieved independence.

Although Lithuania was the last country in Europe to adopt Catholicism, and its residents faced ongoing persecution for making crosses, cross-making is an important past-time there — so much so that UNESCO recognized its importance in 2001.

The haphazard collection of crosses reflects this tradition. They cover a wide variety of shapes and sizes — some are several feet high and beautifully ornate, others are smaller and more humble. They’re also accompanied by hundreds of holy statues and rosaries, turning the destination into a creepy memorial maze and one of the country’s most intriguing tourist attractions. 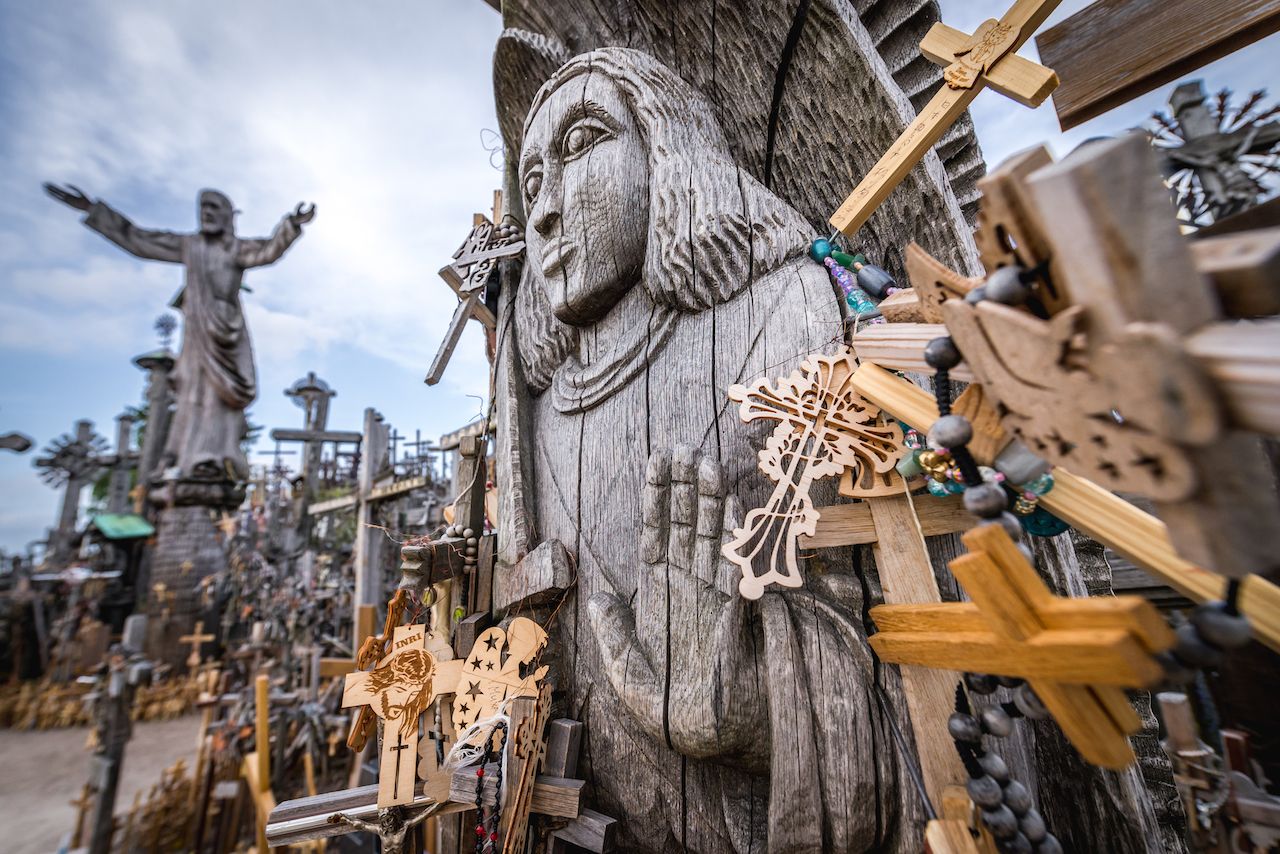 Spurred on by a visit from Pope John Paul II, who held a mass there in 1993, the hill has become a popular destination for international pilgrims and curious visitors. And although the thousands of crosses are undeniably eerie, the hill is also a place of somber tranquillity and reflection. 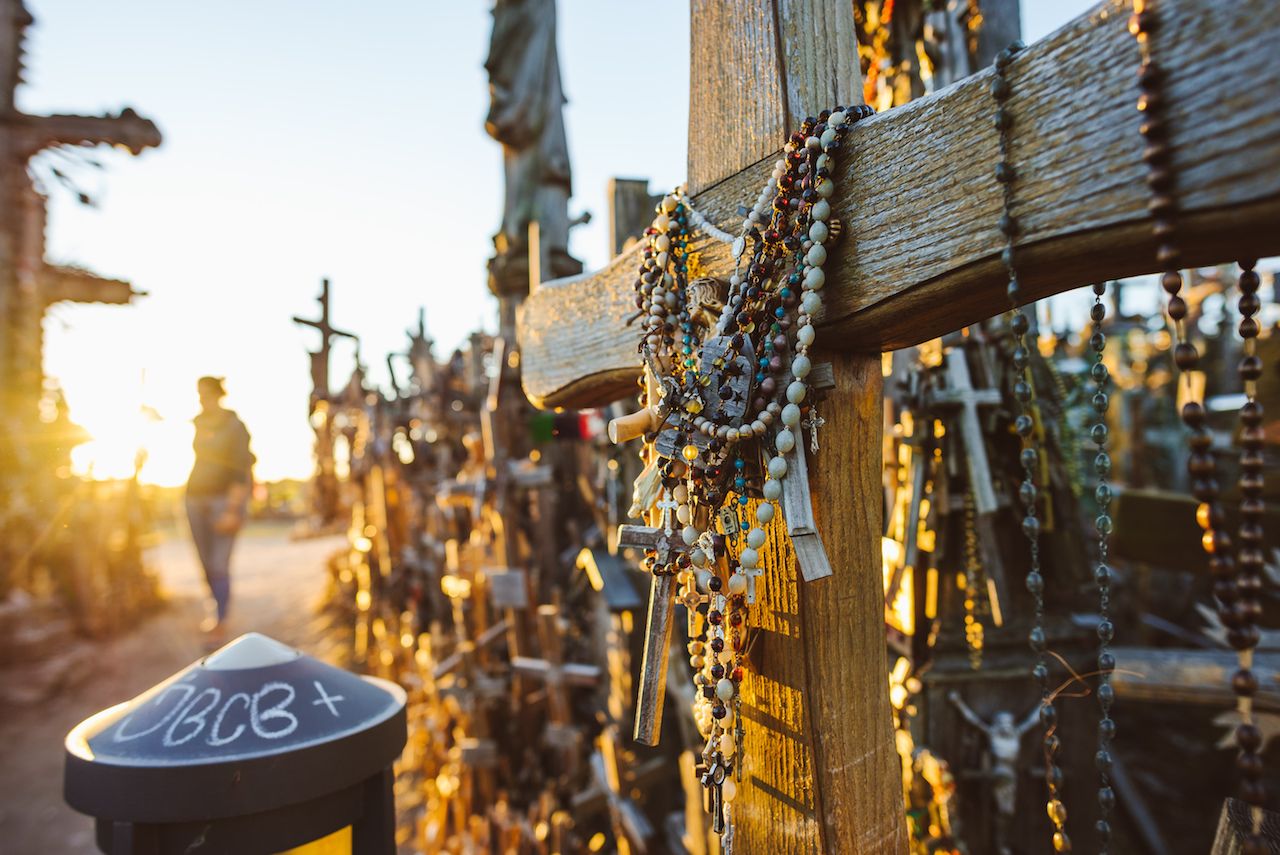 The hill is located seven miles north of Šiauliai, which is easily reached by train. From Šiauliai, there are regular buses that travel to the Domantai stop — from where the Hill of Crosses is a 1.2-mile walk.

CultureThe 7 Most Haunted Places To Visit in Europe
Tagged
Religion Lithuania
What did you think of this story?
Meh
Good
Awesome

The Capital of Lithuania Will Transform Into One Big Cafe

The 26 Funniest Expressions in Lithuania (and How To Use Them)

6 Myths About Lithuania That Need To Die

9 Things Lithuanians Have To Explain To Foreigners

20 Signs You Were Born and Raised in Lithuania