Miami’s Little Haiti has been an enclave since a large number of people started immigrating to the US from Haiti in the 1980s. Yet the area and the culture didn’t receive the same recognition as other immigrant communities in Miami. While tourists come in droves to Little Havana to try cubanos and puff on cigars, hardly anyone sought out Little Haiti. It wasn’t even officially designated “Little Haiti” until 2016.

Today, the neighborhood is finally starting to get the attention it deserves, and that’s mainly due to its vibrant food scene. Haitian cuisine, specifically griot (a marinated pork dish), is one that Miami chefs list as one of the cuisines that the Magic City does best. And Little Haiti isn’t just for Haitian food. Chefs drawn to the area are cooking food inspired by France, Vietnam, Argentina, and more in addition to the cuisine of the neighborhood’s namesake Caribbean island.

These are the tried-and-true restaurants that merit a meal on your next visit. 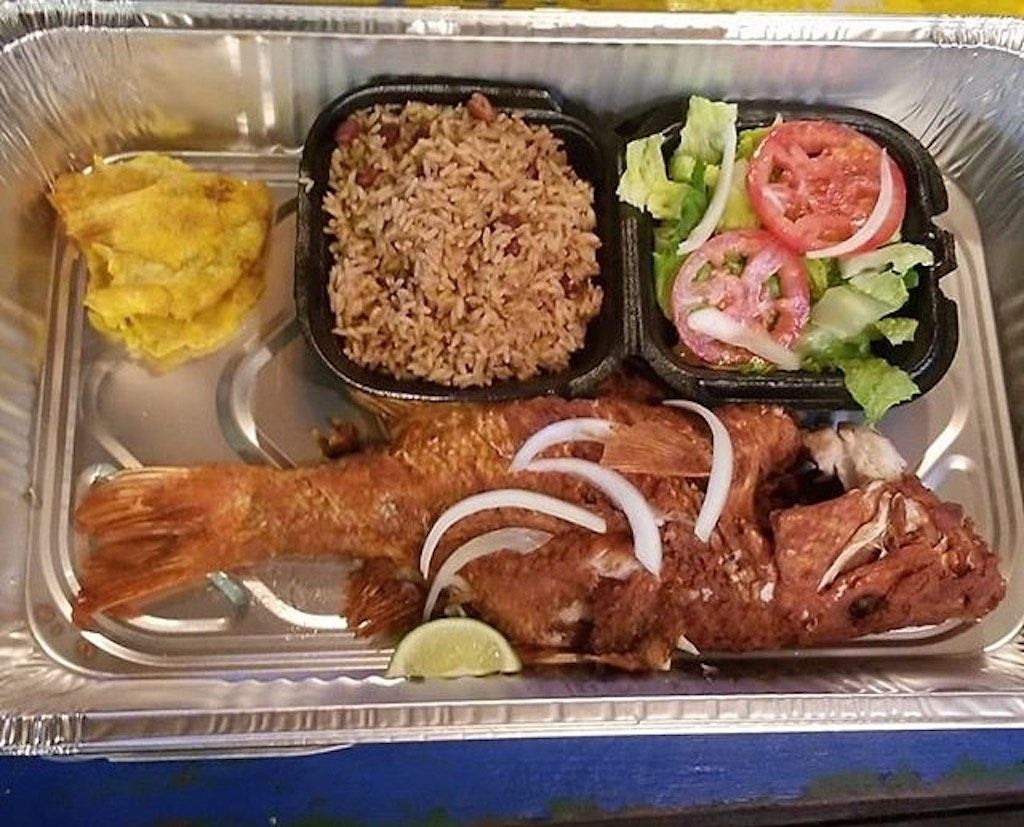 One of the late Anthony Bourdain’s must-visit eateries on his trips to Miami, Chef Creole has been family owned and operated by chef Wilkinson Sejour since 1992. The casual restaurant sits in the middle of the neighborhood’s residential area and offers authentic Haitian delicacies like oxtail, spicy conch stew, and zesty pikliz (pickled vegetables). To taste it, however, you have to be willing to join the hour-long line of locals. Since gaining popularity over the years, the restaurant has opened various offshoot locations around town and sells its own seasoning that makes for a savory souvenir. 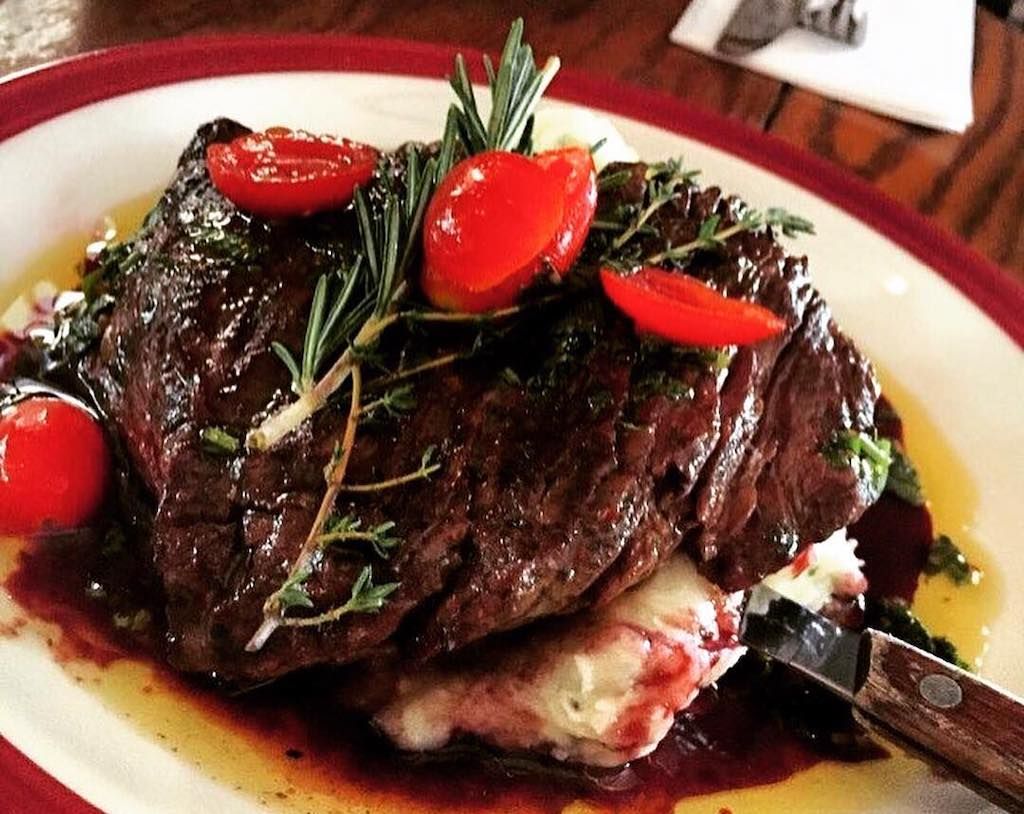 Serving some of the best Argentine steaks in Miami, Fiorito’s homey dishes are served with homemade chimichurri and are paired perfectly with regional wines from Mendoza, Neuquen, and Rio Negro. The restaurant’s rustic setting pays homage to the childhood home of renowned soccer star Diego Maradona, with his iconic blue-and-white striped jersey and scribbled signature lining the walls. Opened by brothers Christian and Maximiliano Alvarez, guests are treated like family as they dine on grilled prime vacio with yukon roasted potatoes and locally sourced arugula while the next generation of the Alvarez family practices their arithmetic at the adjacent table. 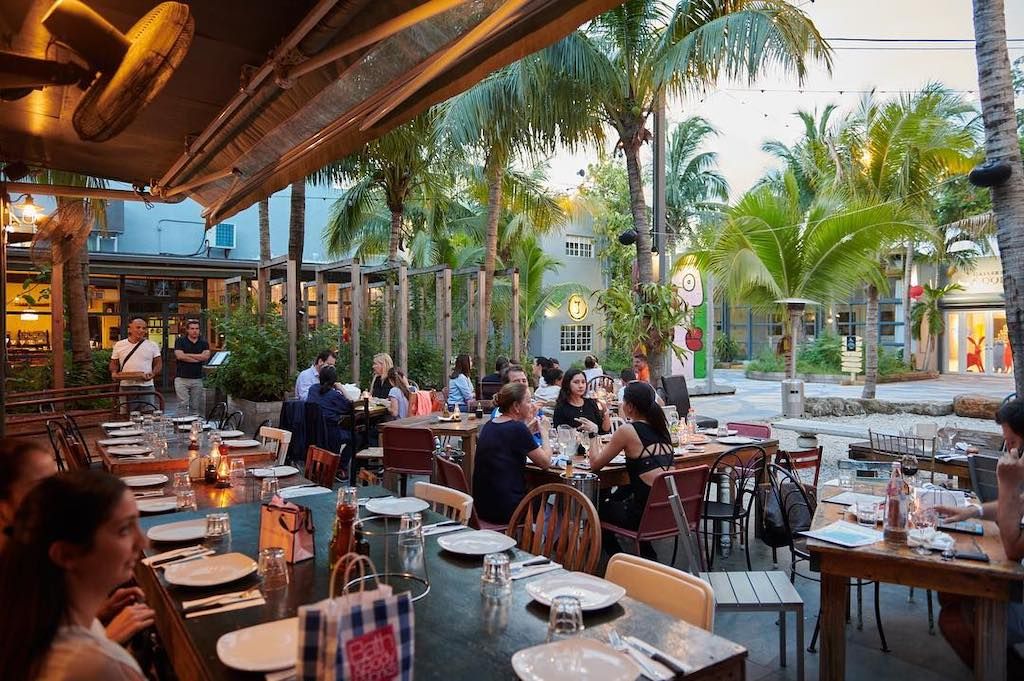 Hidden in Ironside, a lush artist’s enclave on the northern edge of the neighborhood, Ironside Pizza is an Italian expat’s dream. It’s a spot where the servers read off a rotating menu of specials, like the tonne e cipolla pizza and vegetable involtini, in their charming Neapolitan accents. The signature pizzas are made exclusively with traditional Molino San Felice flour and baked in a wood-burning oven to achieve the paper-thin crust and bubbly edges that are hard to find on this side of the Atlantic. A local’s secret: Guests can bring their own wine, beer, and spirits without a corkage fee. 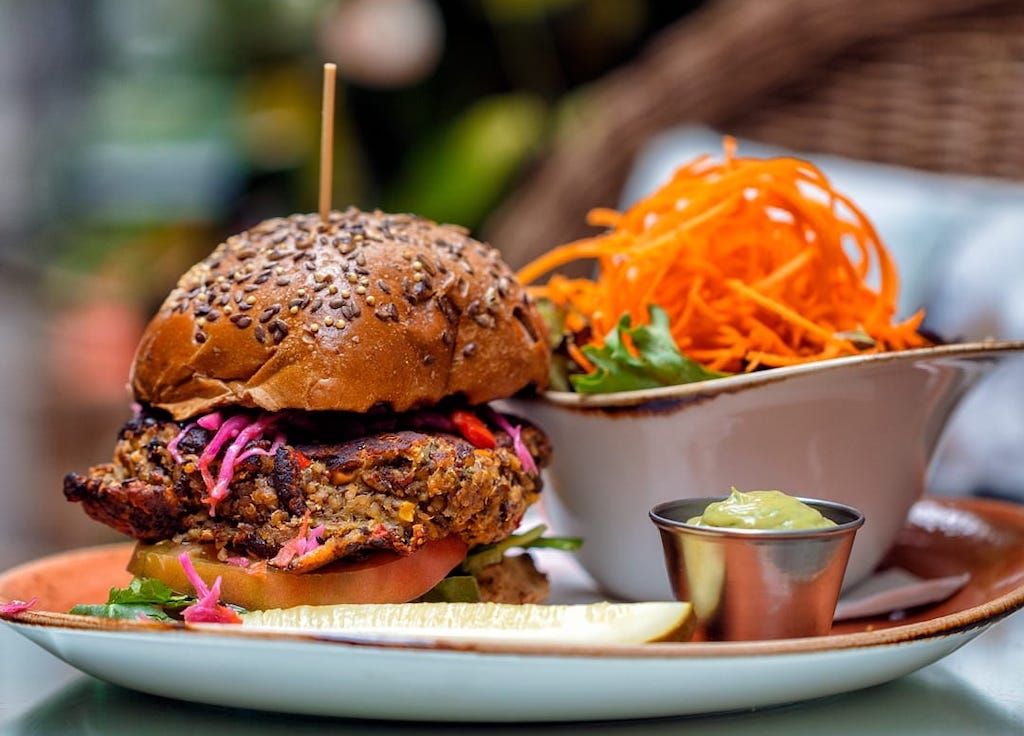 Backed by famed developer and restaurateur Mark Soyka, this namesake restaurant opened in 1999 and has become a dining institution on Little Haiti’s west end (also called the MiMo District) thanks to its upscale soul food and timeless industrial decor inside the eclectic 55th Street Station. Come for Soyka’s famous brandy cream mussels and stay for a late-night tipple like the Smashed by Peach cocktail with bourbon, sweet peach nectar, and fresh mint. Check out the music calendar for the live music schedule. 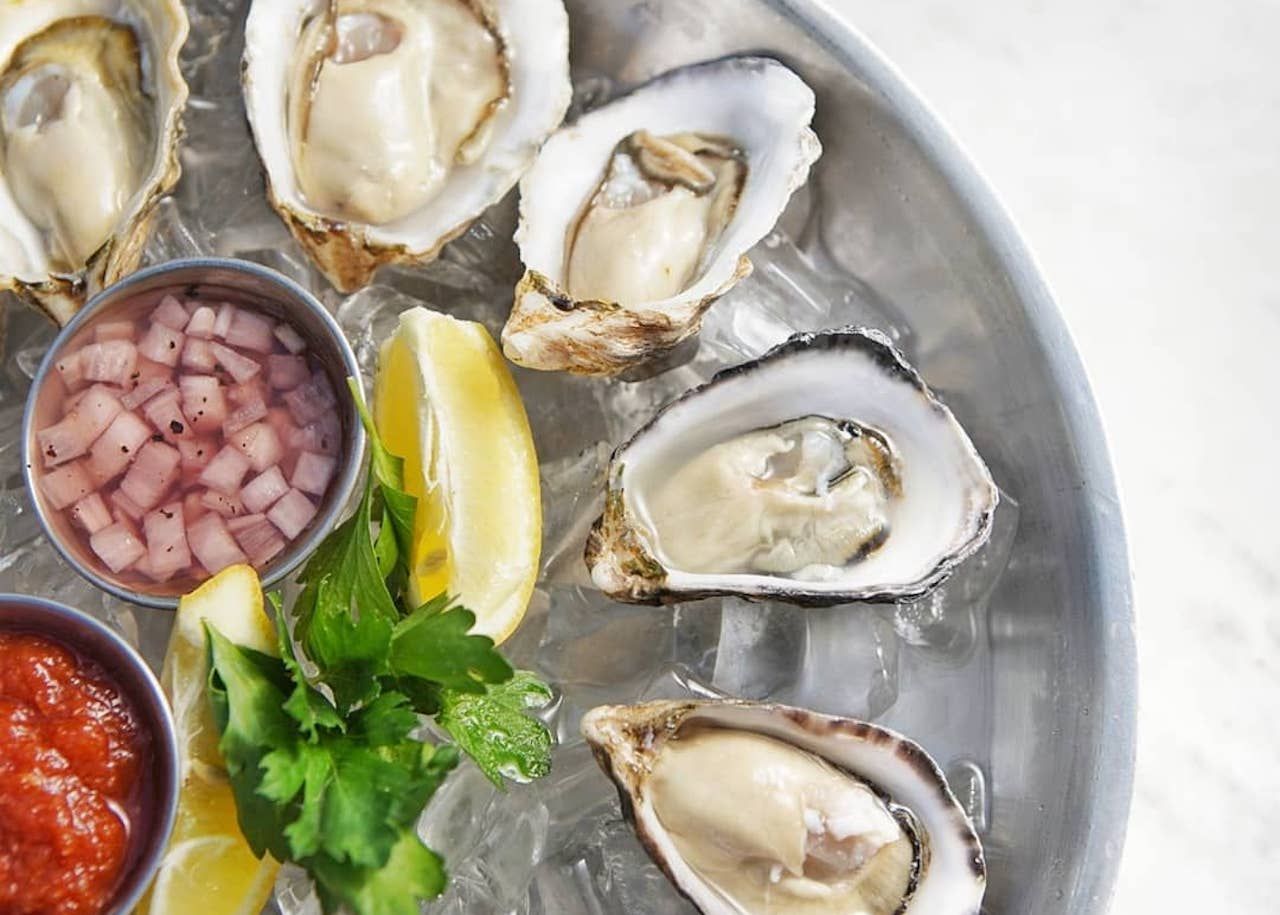 Located in a former 1800s fire station pumphouse and once owned by notorious serial killer Robert Bowman in the 1960s, Café Roval’s charming coquina-shell facade is an unlikely home for one of Miami’s most romantic dinner spots. The restaurant serves upscale French-Mediterranean fare like duck buttone with truffle portobello and drizzled with mustard cream, or the de-boned yellowtail snapper served with farro tabbouleh and a tart lemon tahini dressing. Guests can opt to dine on the open-air patio that features lush tropical landscaping and a trickling koi pond. 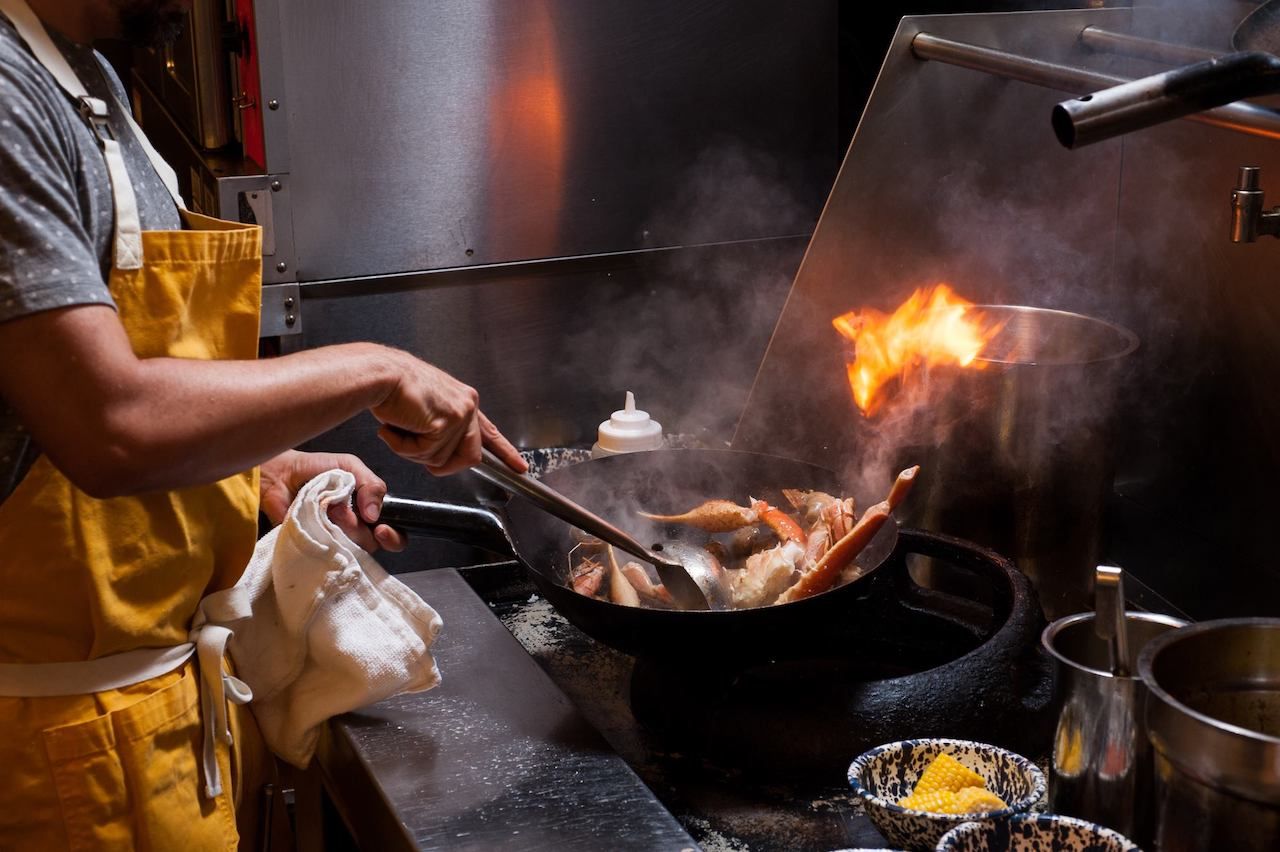 Phuc Yea has a name that’s embarrassing to say but worth the look of disbelief when you recommend it to your boss. This Cajun-Vietnamese eatery started as Miami’s first ever pop-up restaurant back in 2011 by Aniece “Ani” Meinhold and chef Cesar Zapata. After disappearing for a few years, the duo opened the highly-anticipated brick-and-mortar location that now straddles Little Haiti and the historic MiMo District. Guests can snack on soft shell crab buns in the low-slung chairs that line the front terrace, sip on a Soursop Mojito made by Ani herself at the bamboo-strewn bar, or scarf down spicy wok-tossed gulf prawns in the peony-painted private dining room. Disclaimer to those only looking for a steaming bowl of sustenance: The short rib pho and other varieties are available exclusively during happy hour to encourage guests to venture into more experimental dishes.

Restaurants + BarsWhere To Eat in Miami, According To Miami’s Best Chefs
Tagged
Restaurants + Bars Insider Guides Miami, FL, United States
What did you think of this story?
Meh
Good
Awesome