It sounds like something a drunk Red Sox fan would scream outside Yankee Stadium to incite a riot. “The best Little Italy is in Boston” isn’t just an inflammatory remark meant to piss off New Yorkers — it’s a sentiment familiar to many who have visited the small neighborhood in Boston’s North End and enjoyed its unique character, cuisine, and aesthetic.

Chances are, when you think of Boston, you’re thinking of Little Italy. Cobbled streets, waterfront promenades, and historic churches define the North End, which was the first neighborhood in the city. Formerly a bastion of Revolutionary War soldiers, then an Irish district, and a center of Italian culture and cuisine since the early 1900s, the North End isn’t just about spaghetti and meatballs but delicious pastry shops, dozens of festivals, and some of the city’s best nightlife. Sorry, New York. Boston’s Little Italy is the best in the country, and here’s why. 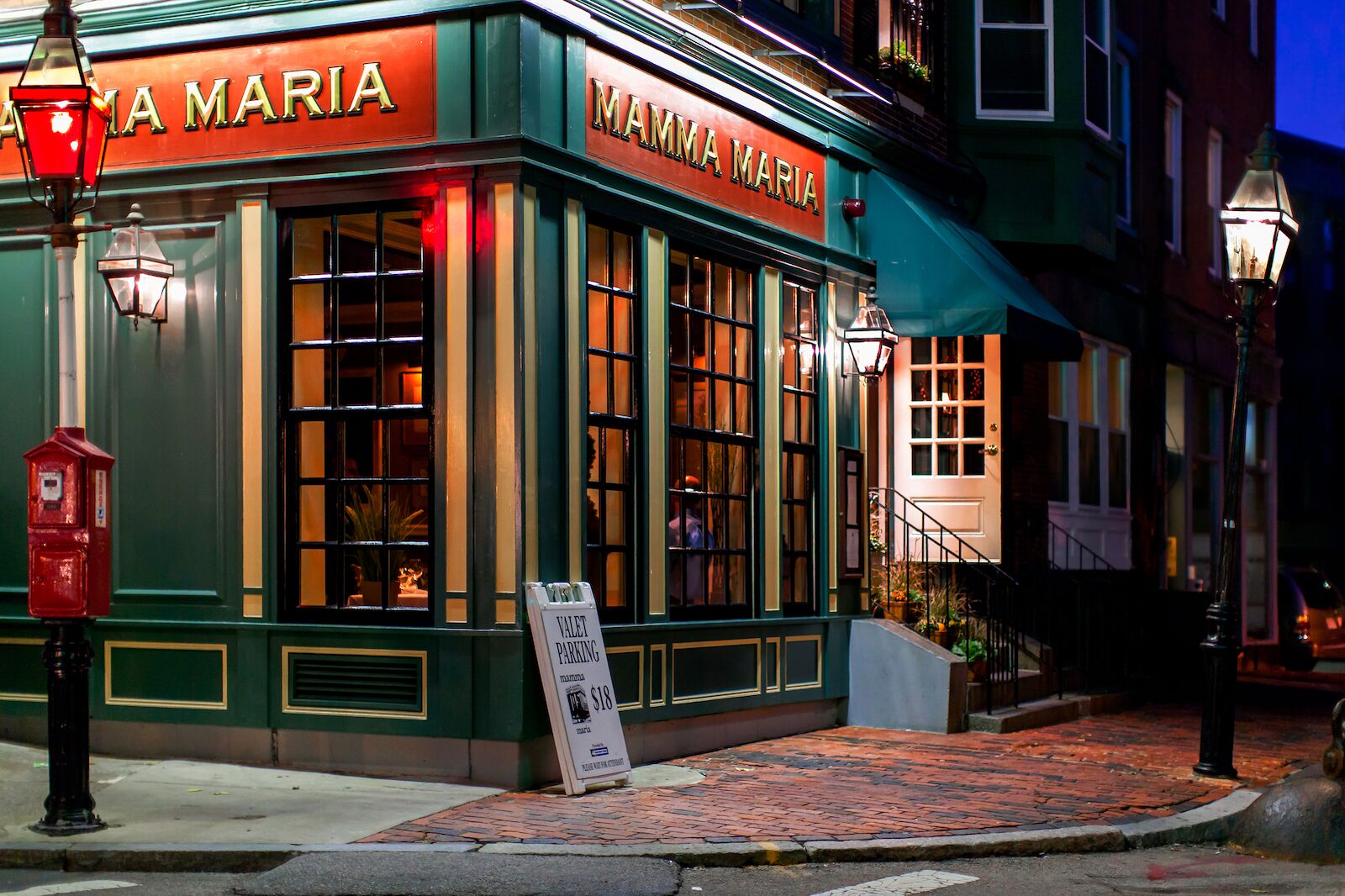 There’s a time and place for cheeseburgers and quesadillas, and the restaurants of Boston’s Little Italy are not it. When it comes to dining in Little Italy, it’s all about pappardelle, meatballs, fish, and, of course, pizza. If you’re looking for a blend of atmosphere and flavor, it’s tough to go wrong here. To dive right into the Boston Italian culinary experience — and for a pretty good date spot, too — check out Mamma Maria in North Square. Housed in a 19th-century rowhouse, this restaurant has five private dining rooms, a pasta-heavy menu, and panoramic views of the North End.

No matter how full you may be from dinner, there’s always room for pizza. Take a walk through North Square, check out the waterfront, and before you know it you’ll be ready for second dinner. There’s a hot debate over Boston’s best pizza, with Regina Pizzeria (North End) and Santarpio’s Pizza (East Boston) regularly winning out, but if you only have one slice in Boston’s Little Italy, make it from Ernesto’s on Salem Street. This little eatery has been a neighborhood favorite for over 30 years and somehow manages to avoid the hype that plagues its competitors.

Leave the gun, take the cannoli 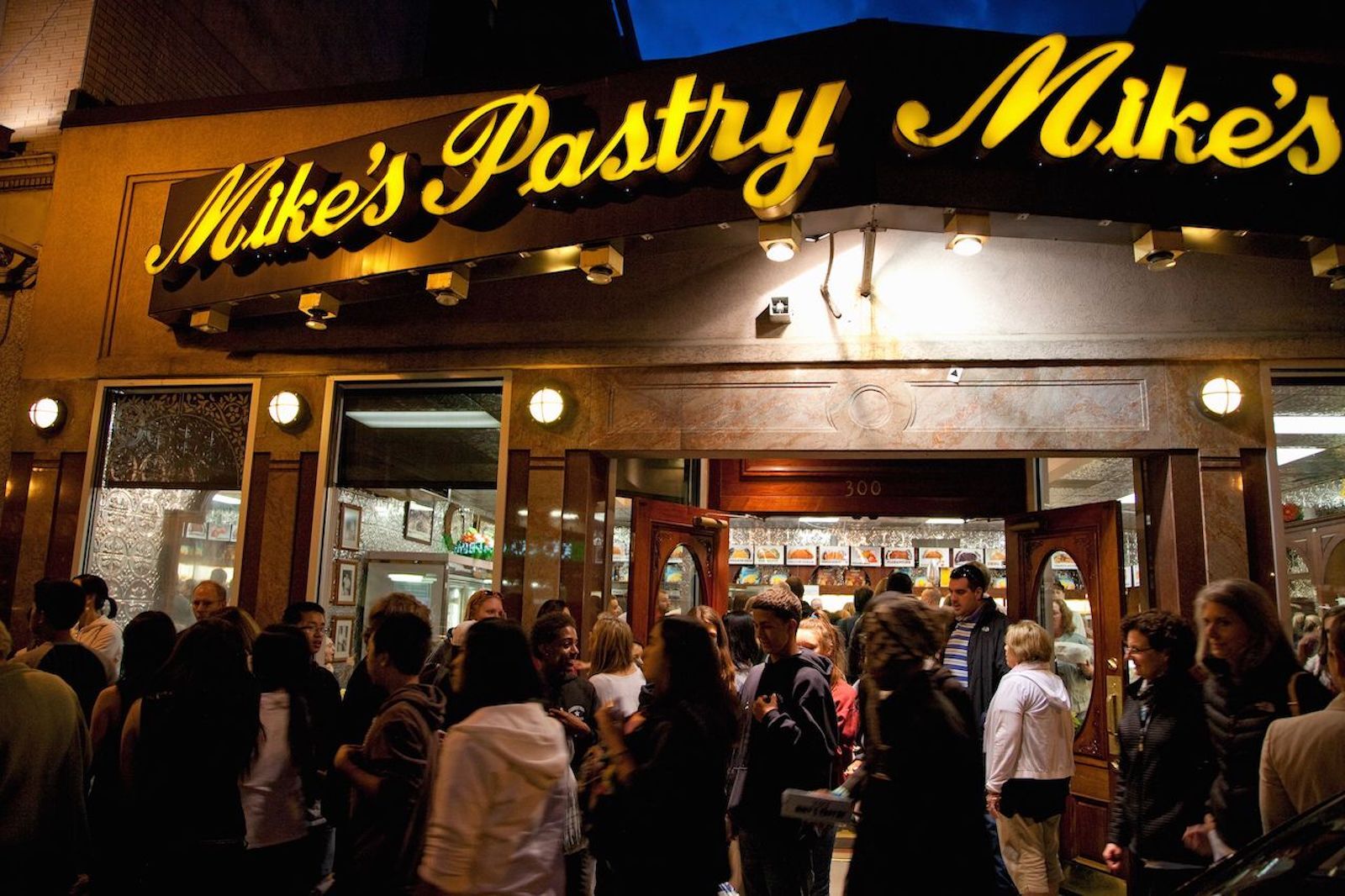 Unlike some of its pizza joints, the North End’s more notable dessert spots definitely live up to the hype. Mike’s Pastry on Hanover Street is the most famous pastry shop in Boston, with people regularly coming from outside the city just for a box of their cannolis. Indeed, the “Home of the Cannoli” moniker is well-earned. Since 1946, Mike’s has been a staple of the community, offering up dozens of varieties of cannolis, cookies, pies, and cakes. Just be prepared for a solid 15 minutes of indecision while you figure out which cannoli you want. The options include espresso, chocolate mousse, oreo, hazelnut, peanut butter, limoncello, and pecan caramel cannolis, and more.

Bova’s Bakery on Salem Street is another Boston classic, and it dates even farther back than Mike’s. Since 1926, Bova’s has served the local community homemade Italian cookies, pastries, pies, baked bread, and even Sicilian pizza. Between these two pastry shops, you should be able to find any Italian dessert your sweet tooth desires. 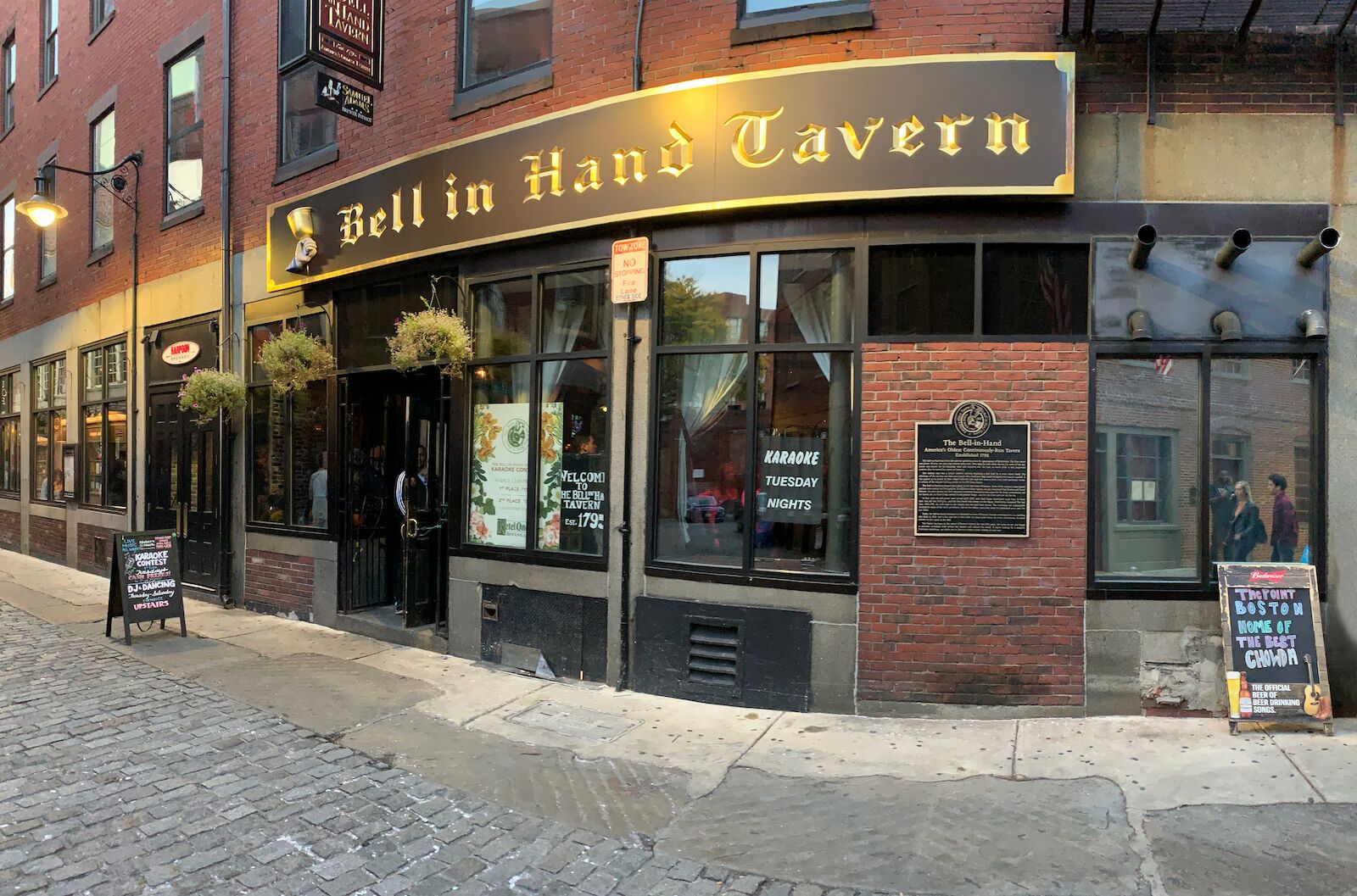 The best part about the North End is that you can pretty much spend the entire day in this part of the city and have a complete Boston experience without needing to venture anywhere else. It’s a given that Boston’s Little Italy will have an abundance of delicious food, but when Happy Hour rolls around and you start getting thirsty, look no further than North End nightlife.

If you’re someone whose friends are always telling you, “You’re really funny; you should take improv,” then you’re in luck. Assuming they’re not just being sarcastic, the Improv Asylum on Hanover Street is a unique venue that’s probably right up your alley. This improvisational comedy theater puts on several shows every week, which blend sketch comedy and improv scenes, and they offer classes in comedy writing, improv, and musical improv. That said, it’s far from being the only Boston comedy club worth visiting; Laugh Boston, the Wilbur Theatre, and more will provide hilarious entertainment, too.

For those looking for a more fist-bumping nightlife experience, Bell in Hand Tavern is your spot. Claiming to be the oldest bar in Boston — it opened in 1795 — Bell in Hand has something for everyone and is one of the best bars in Boston’s North End. The downstairs has live music, a bar, and a dance floor while the upstairs has DJ music, two dancefloors, and two bars. If you tell someone in their 30s you’re going to Bell in Hand, they’ll probably reply with a hint of condescension, “What is it, your 21st birthday?” It’s true, the crowd here is pretty young, but if you’d rather party like a 21-year-old than sip craft beers next to suited young professionals, this is the place for you. 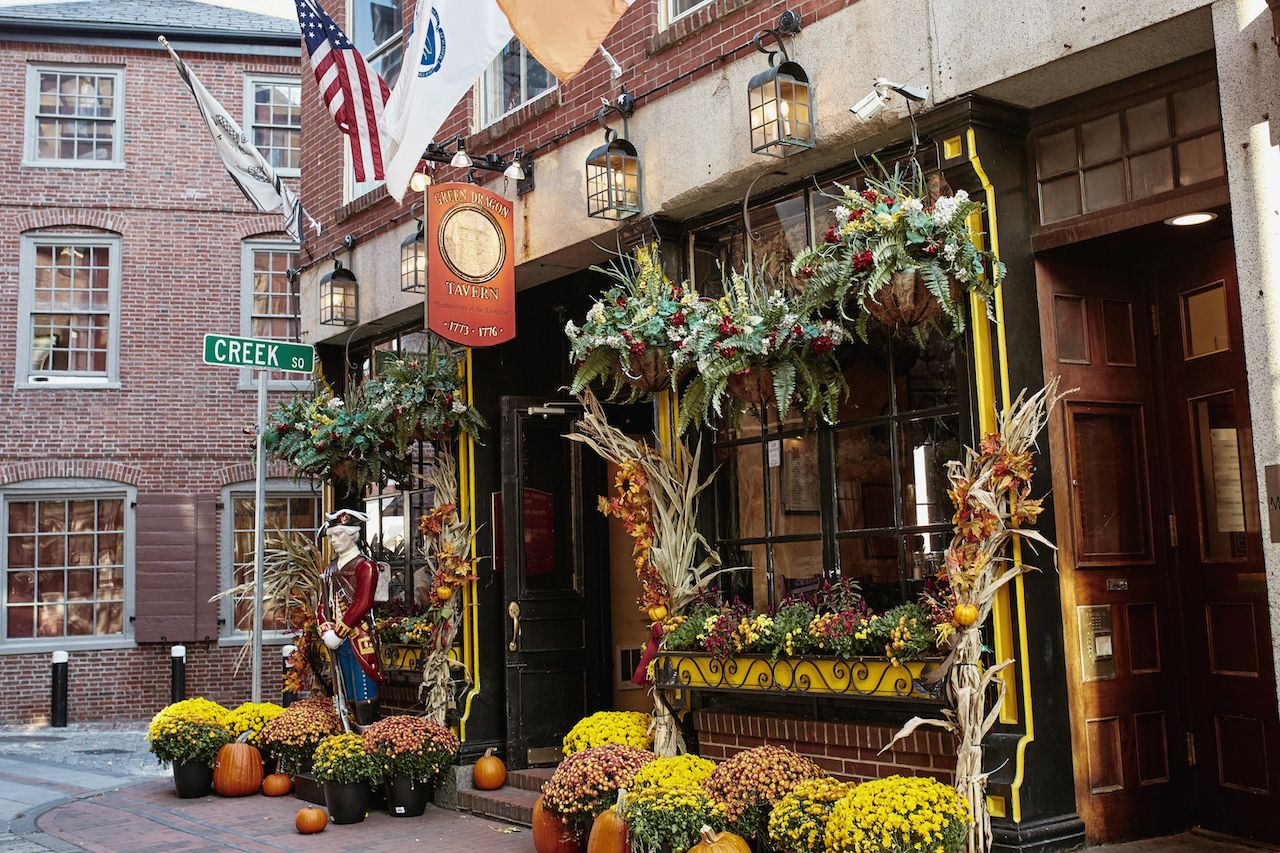 Being in Little Italy might not inspire you to visit an Irish pub, but in Boston it’s almost mandatory. Just a few streets over on Union and Marshall, right behind the Bell in Hand, several Irish pubs line the road, making it easy to blend your day in Little Italy with the famous Boston Irish experience. You can’t go wrong with Hennessey’s, Paddy O’s, or The Green Dragon, which are all staples of Boston’s Irish pub scene. 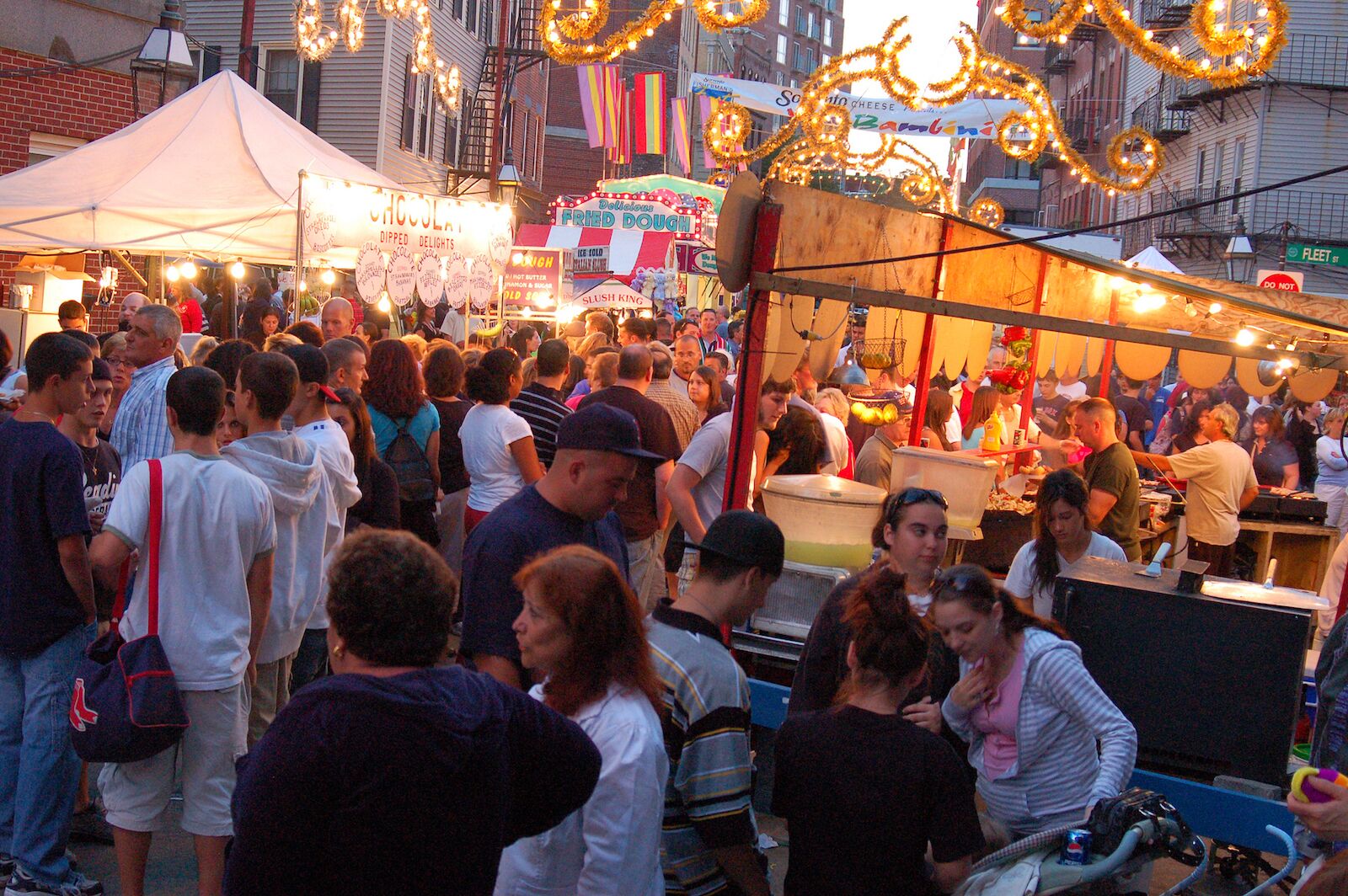 Summer is festival season in Boston’s Little Italy. Pretty much every weekend from the beginning of June to mid-September has a feast, festival, or procession you can look forward to, all steeped in Italian tradition. The season typically kicks off the first weekend of June with the Santa Maria di Anzano Procession, which involves a procession down the cobbled streets, a church service, and, of course, a hearty feast.

The next event to look out for is the St. Agrippina di Mineo Feast, which takes place in early August. In addition to street food like pasta, fried calamari, arancini, shellfish, and cannoli, the festival has live music and DJ concerts, and even a charity raffle. Seafood-lovers will want to keep an eye out for the Fisherman’s Feast, which usually takes place in mid-August and follows the traditions of fisherman coming to Boston from Sicily in the early 1900s. Stalls of fresh fish, meats, music, and games will take over the streets of the North End, and it’s all run by the descendants of the original Sicilian fishermen.

If you only go to one festival in Boston’s Little Italy, however, it should be Saint Anthony’s Feast at the end of August. One of Boston’s oldest festivals, celebrated since 1919, Saint Anthony’s Feast is the largest Italian religious festival in New England. Dubbed the “Feast of all Feasts,” this four-day festival has parades, singers, live entertainment, contests, religious services, and, of course, more Italian street food than you can handle. 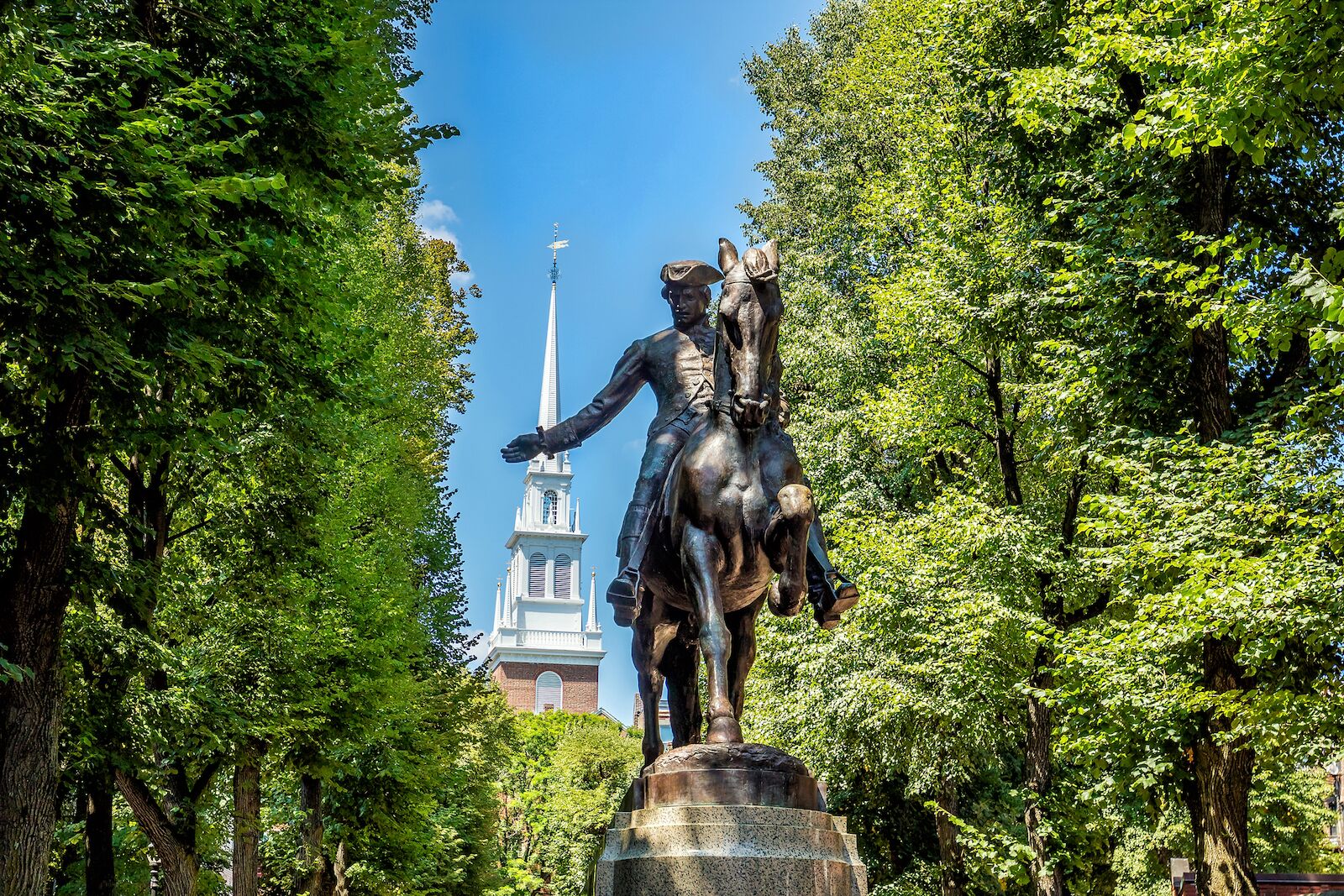 Beyond its food, drinks, and festival offerings, Boston’s Little Italy is home to many historic sites, including several that are part of the famous Freedom Trail. While you can take a 90-minute guided tour of the official Freedom Trail historic sites, if you prefer checking out the neighbordhood at your own pace, that’s entirely possible — just make sure you hit all the good spots. Visit the Paul Revere House, the home of the legendary man who rode his horse in the night to alert American revolutionaries of the British approach in April 1775. And don’t miss Old North Church, the oldest church building in Boston (built in 1723) and a structure that was also instrumental in the start of the revolutionary war.

If you’re keen to get some fresh air out on the water, take one of the many cruises that launch from Boston’s Little Italy. Boston Harbor City Cruises, for example, has dining cruises and sightseeing cruises that start straight from Long Warf, a less-than-10-minute walk from the Paul Revere House.

Epic StaysThe Best Airbnbs in Boston, From Beacon Hill To a Ship in the Harbor
Tagged
Culture Food + Drink Insider Guides Boston, MA, United States
What did you think of this story?
Meh
Good
Awesome