To say that I was mentally prepared for this trip would be quite accurate. I knew what I was getting myself into and I was well aware of the situation over there, or at least the situation portrayed to me by American media. And I didn’t really have any qualms about getting detained because I tend to excel in following rules. So to be honest, my biggest fear was just giving up Internet connection for a week.

The only way to access North Korea is by going through a few tour companies that are based in Beijing. I had a friend who had been the year before so I trusted her recommendation and went with the same company called Koryo Tours. She came back alive so that was good enough for me. Next was deciding which passport to enter with. I have dual Mexican/ American citizenship so I asked about what difference it would make. Americans are only allowed to enter the DPRK by plane and Mexicans must take the 26-hour train ride from Beijing to Pyongyang. Needless to say, I opted to go the American way.

I arrived in Beijing two days before the scheduled flight to Pyongyang and one day before the mandatory group briefing. At the briefing, we went over what not to do in North Korea. For example, do not crease the newspaper in any way that would leave a fold over Kim Jung-Un. He’s on every cover. Also, don’t throw that newspaper away; if you want to get rid of it just leave it on a table. Don’t call it North Korea; refer to it simply as Korea. Don’t bring in religious material. Don’t ask inappropriate questions. And please delete all those Kim Jung-Un gifs off your iPhone. Got it.

So the next day I woke up extra early for no reason at all. We all met up at the airport around noon to collect our visas and check in together. It was all going quite neutral until I had a sudden panic attack standing in the security check line. I think it had something to do with all the engagement and pregnancy announcements that I saw on Facebook earlier that day. My subconscious must have simmered with the news and decided that 12:54pm was a great time to establish that I had forever been making bad decisions while my peers were out there getting shit together. And there I was, about to board a plane to the most isolated country in the world to spend the holidays alone.
Splendid.

Or maybe my panic attack merely had something to do with saying goodbye to Instagram for a week. I do love my daily Insta-dose. Whatever the case, I bought a family-sized chocolate bar at the duty free shop and ate my feelings because I’m an independent woman who does what she wants.

On the plane we were bombarded with videos of the current and past Dear Leaders (as they are referred to) and snapshots of North Koreans smiling and clapping and performing songs and dances to further honor these leaders. We also received a complimentary but questionable looking sandwich. I’m usually very open toward random food, but the effects of my contempo panic attack still lingered. Hence, sandwich left uneaten.

When we arrived at the Pyongyang airport, they screened our luggage and took our books away for further examination. We met our Korean tour guide, Chang, and went off to the hotel to have dinner and get some sleep. 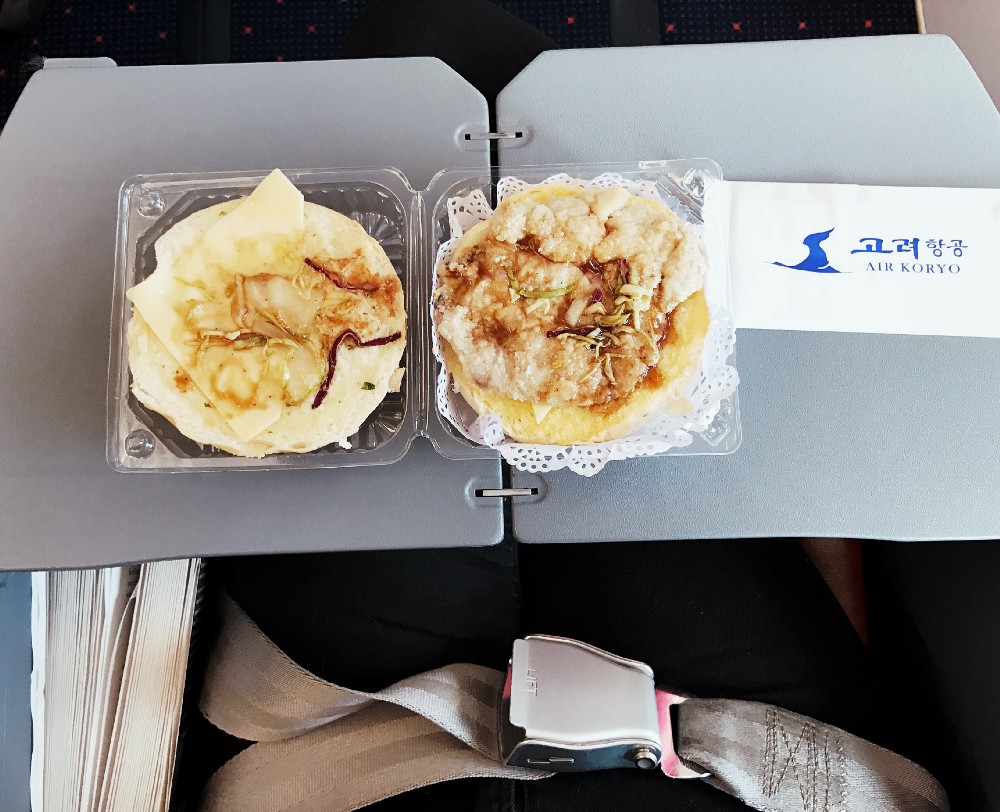 Air Koryo Chicken sandwich. Some new friends described it as “not bad”. 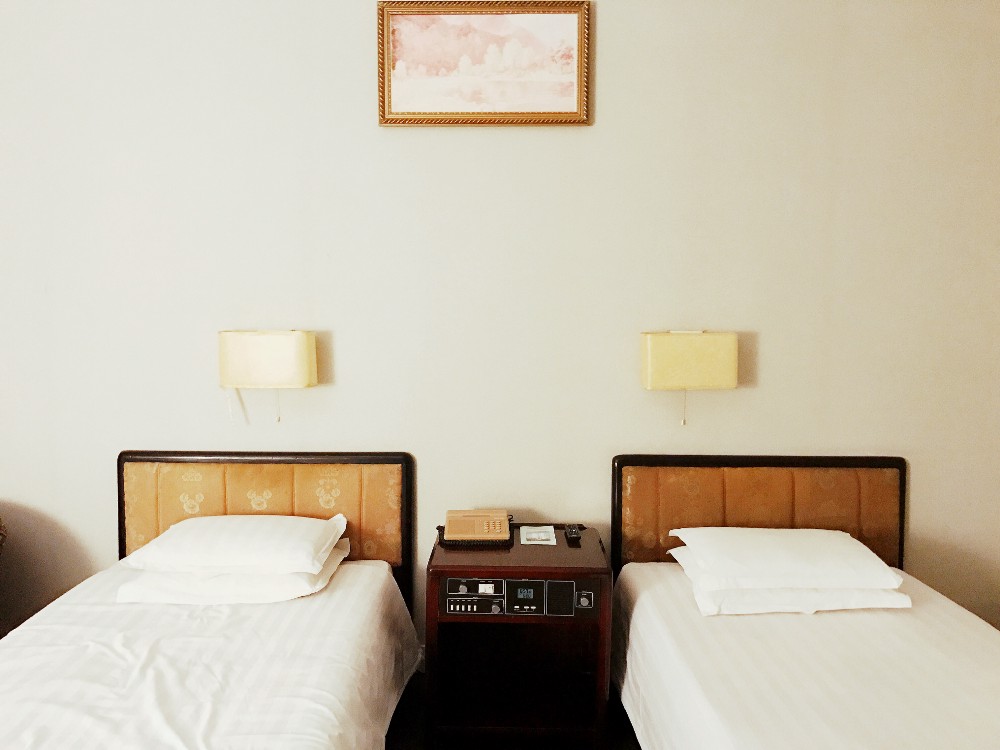 My room at the Yanggakdo Hotel, located in the middle of the Taedong river in Pyongyang. 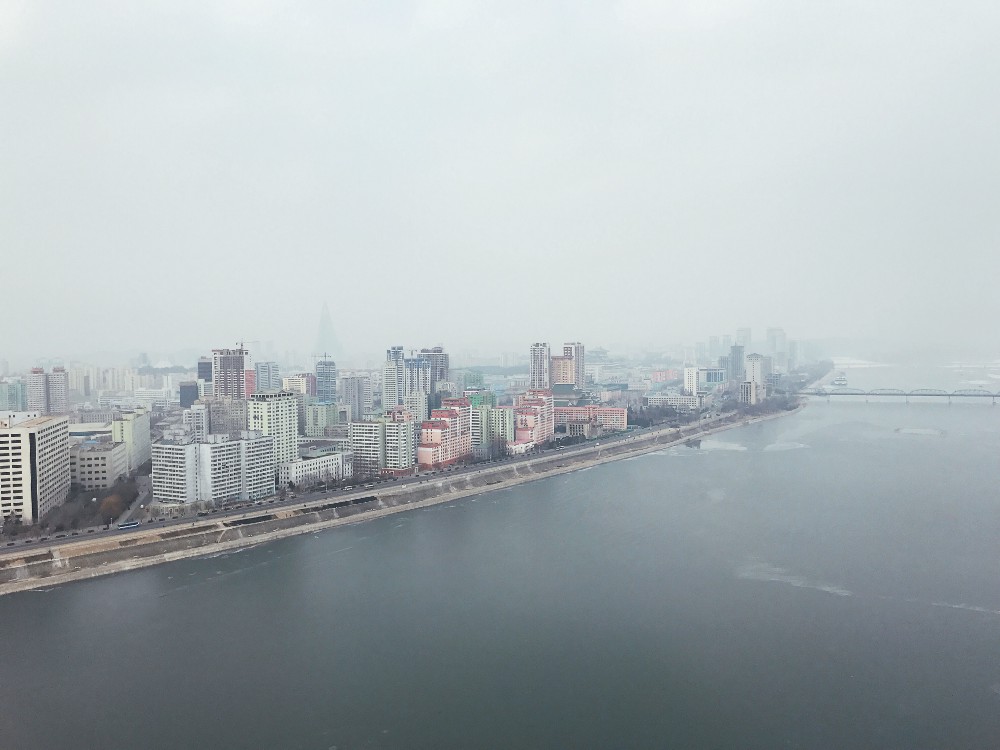 View from hotel. No chance of ever leaving the hotel unaccompanied by a Korean guide.

The next day we parted our Pyongyang hotel and headed down to the DMZ, 3 hours south. The DMZ is the Korean Demilitarized Zone on the border of North and South Korea that serves as a buffer zone where negotiations between the divided countries take place. While we were there, Chang pointed to some cars parked in the distance and told me that they belonged to the South Korean side. It felt eerie; we were so close yet so far. The tension was still palpable.

Things I learned about North Korea on Day 1:

For lunch we were offered a choice between dog or chicken soup. Farmed dogs and chickens, we were assured. I opted for the chicken because I can only take so much novelty in one trip. (But there’s so much more on my dog eating conundrum here.)

Thoughts that crossed my mind during Day 1: 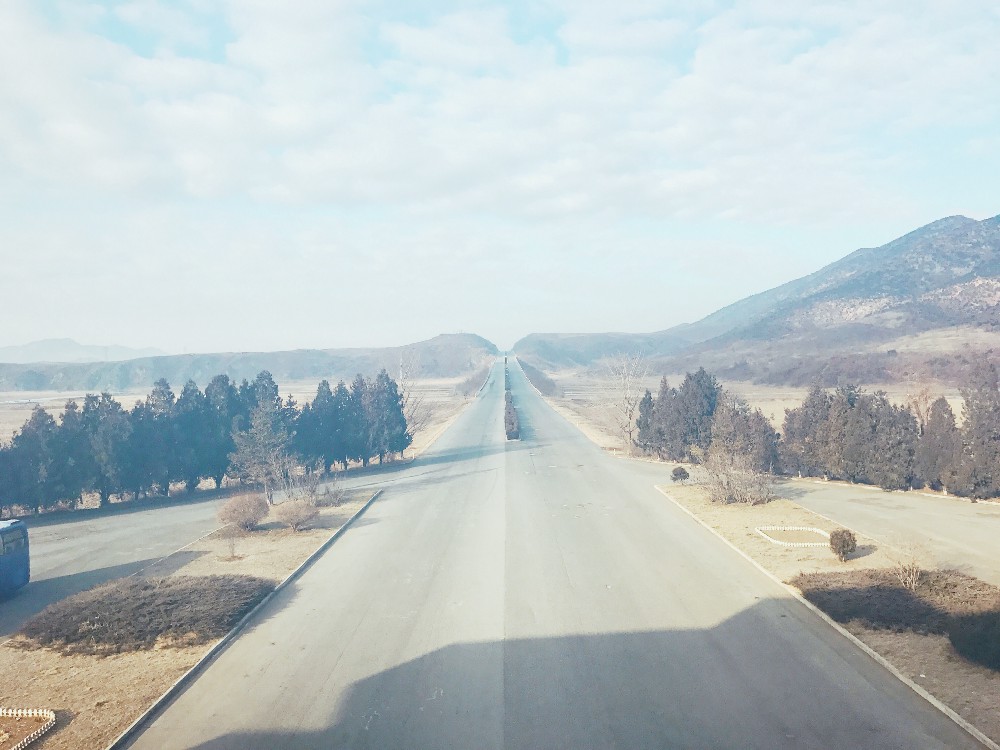 The empty 6-lane road to the DMZ that our bus traveled on. Bumps not visible to the naked eye. 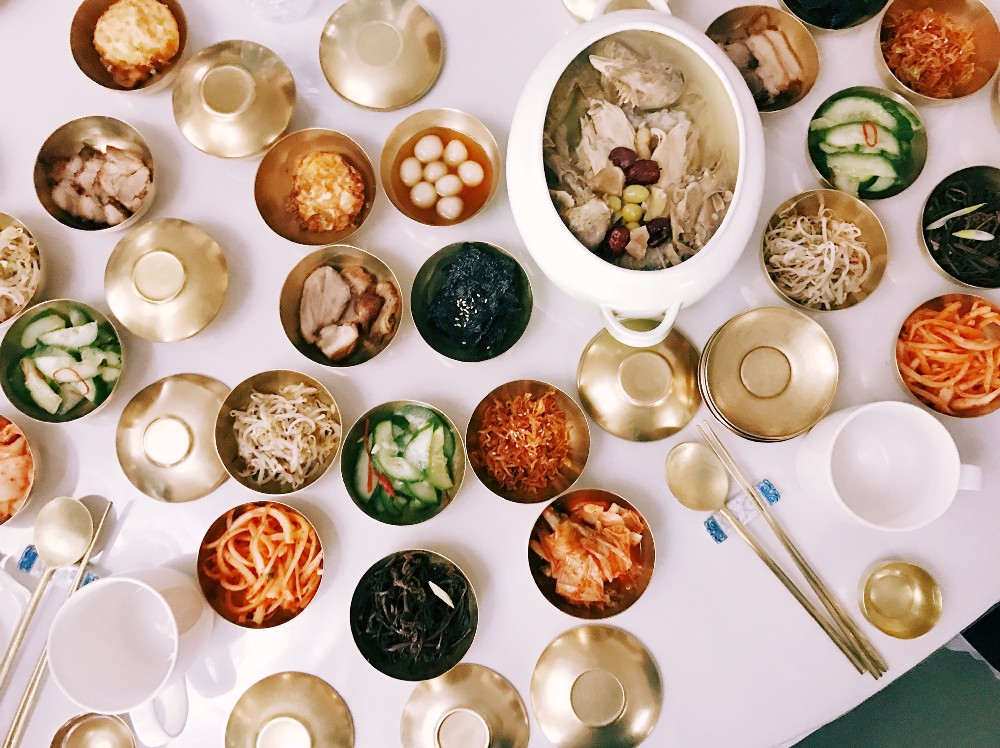 I opted for the chicken. Dog soup not shown, but it was described by some as “stringy”. (I know.) 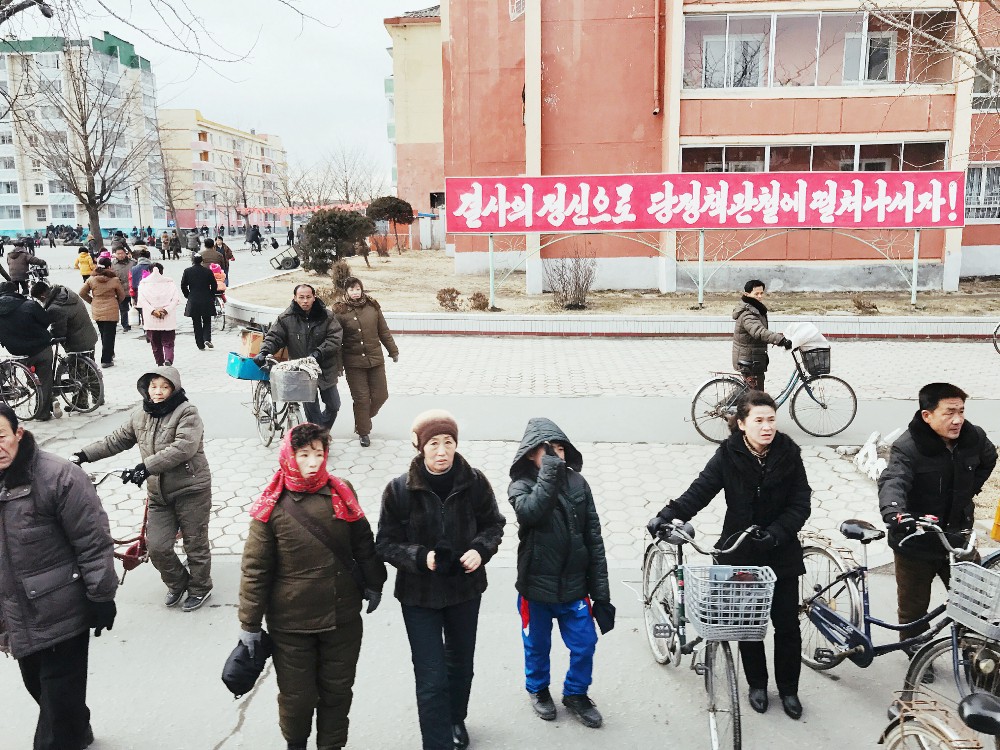 The bike: DPRK’s most common form of transportation.

I asked Chang about jobs in the DPRK and she told me that North Koreans have 3 options when they finish school at 17: to begin working, to join the military, or to go to college, but going to college is highly dependent on grades and a lot of test passing.

I asked her about the different salaries. She told me that most people get paid about the same, but jobs that require more physical labor, such as mining and construction, get paid a little more. There is no unemployment and the government provides some monthly basics per family such as rice and cooking oil.

That night I decided to deal with this excess of new information and the deficiency of all insulation by downing a few bottles of Russian wine at the hotel bar. Which leads me to…

Thoughts I had at the start of Day 2 in the DPRK:

The second day we toured a few more statues, visited a synthetic leather factory, a children’s school, the War Museum where we learned about America’s “shameful defeat” (their words, not mine) in the Korean war of 1950, and saw the science museum with over 2,000 new computers. The computers connect to North Korea’s Intranet, which is similar to our Internet, except that it is highly censored and only extends within the DPRK. Email is not a thing. 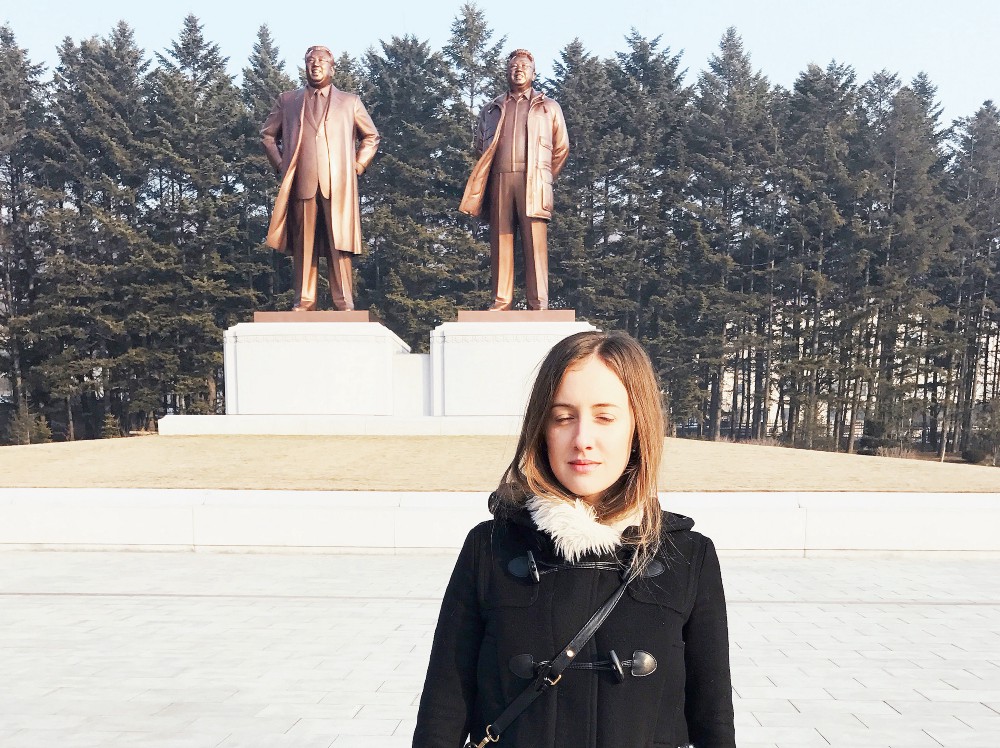 Me, most definitely not hungover in front of the Dear Leaders. (P.S. We were instructed to keep our hands by our sides for all pictures and not make any “unusual poses”.) 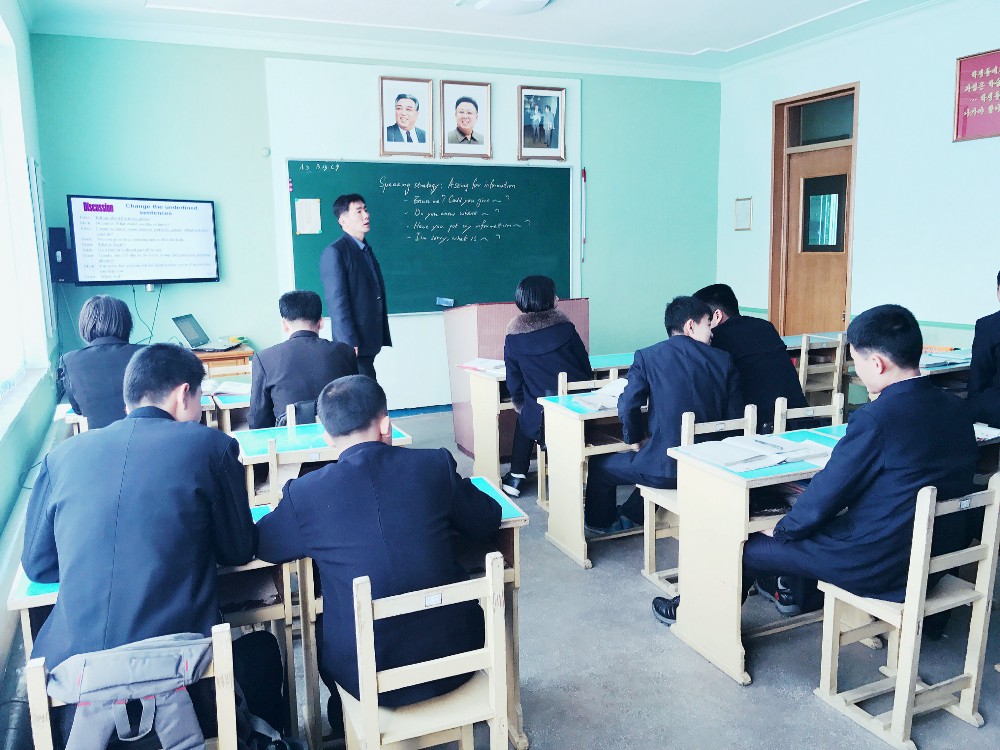 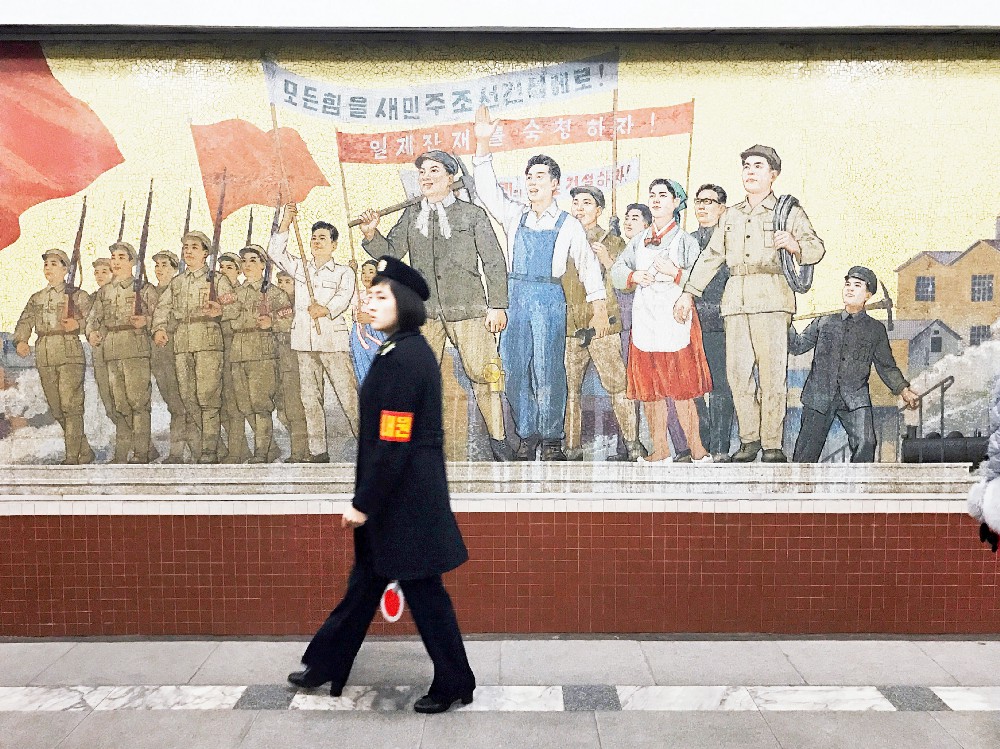 Metro controller in front of propaganda that covered all the metro walls.

The rest of the week carried the same routine: more museums and more bowing in front of the leaders.

And at the end of it all, I didn’t unveil any hidden truth behind North Korea like I so confidently thought that I would. The more I witnessed, the less sense it all made. We were blasted with so many smiles and songs and stories. We were overfed, over-welcomed and overexerted to the point of confusion.

Was it all just for show? Yes.

Not everything was fake though. The people are real.

Chang and I bonded little by little throughout the trip. I had no communication with the outside world so she slowly turned into my confidante. At the beginning she was hesitant, as it is not customary in Asian culture to open up to strangers, but she warmed up. She also organically began sharing some of her own stories. We empathized with each other.

The trip ended and the day finally came to say goodbye. Chang took our group to the airport and when I hugged her she pulled me aside and gave me advice on something we’d been discussing. It was intuitive and caring.

She got me. And I got her. There was no emotional barrier between us. We had really connected. We had become friends.

I hugged Chang again, and this time tears started coming down uncontrollably. I could feel my heart breaking. It was like that childhood memory of your best friend moving to another country. Except that there would never be a chance for us to reconnect. Chang began crying too. And after a while we finally let go and allowed for the physical barrier to set in.

I still hold back tears every time I come back to edit this part of the story. I miss you, Chang.

This post wasn’t meant to be political or shed any insight on the problems or potential solutions to the North Korean crisis. I left out a lot of detail and itinerary specifics.

There have been multiple accounts from various North Koreans who were able to escape the country. If they are caught by neighboring countries they are shipped back to North Korea where they receive violent punishments. Which may be why there are so few success stories. For information on one successful refugee, click here.

If you have any questions regarding my trip please email me at adriana@8billionothers.com.

This article originally appeared on PoliticsMeansPolitics and is republished here with permission.

Tagged
Narrative North Korea
What did you think of this story?
Meh
Good
Awesome

20 Things I Learned in North Korea