There is no shortage of silly place names around the world. The UK is home to the town Bell End, in Argentina you can visit Moron, and French Polynesia has Disappointment Islands. It also turns out that, once translated into English, Denmark has some hilariously named villages and towns. Courtesy of a Reddit user here’s a comical map, displaying some of the best literal translations of Danish place names. 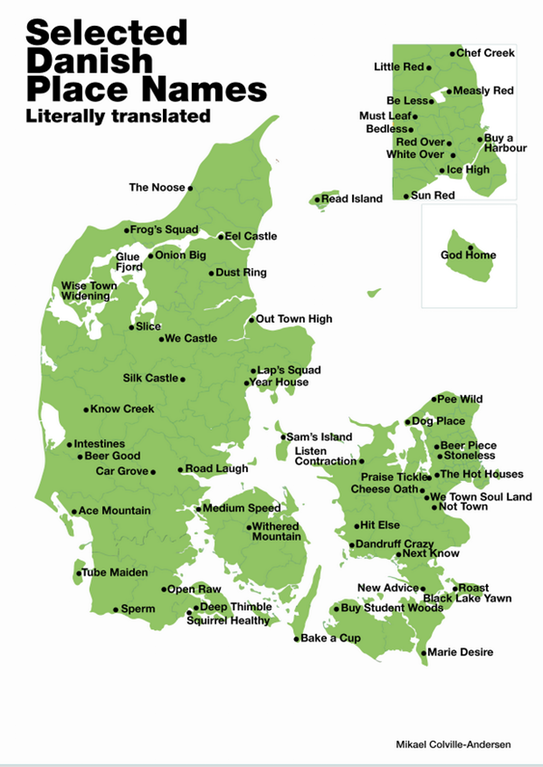 Of course these destinations aren’t all the actual, contextual meaning of places in Denmark. For example, Copenhagen doesn’t really mean “buy a harbor,” it means merchant’s harbor — but that is the literal translation if you were to take every word at face value.

Some of the best names on the map include Dandruff Crazy, Frog’s Squad, Onion Big, Sperm, Squirrel Healthy, Bake a Cup, Beer Piece, Cheese Oath, and our personal favorite, Not Town.

We took to the back catalog here at Matador Network to bring you a few more international place names that need no translation in order to be hilarious. Anyone up for a road trip to Fucking, Austria?

Luckily for Twatts, their town is on the Orkney Islands, far away from the mainland and confrontational outsiders.

A man’s mountain if ever there was one.

The highest point in Cornwall at 1,378 feet above sea level, formerly known as Bronn Wennili, has been the topic of some controversy. Campaigners have called for a reversal of the title to the original name on the grounds that it would be more appealing to tourists, but many Cornish residents oppose the change.

Where the headquarters of the Department of the Interior is located, naturally…

Located just outside of Bristol, England is the village of Catbrain. This unfortunate name is the result of its Middle English origin, “cattes brazen,” which was a description of the type of soil in the area.

The great white north has inspired quite a few absurd names.

Would you bring your kids up here? Seriously.

Again we pity the children who have to reveal it as their parents’ chosen destination to fellow schoolmates.

Coolville, Ohio — a better option to start a family.

Apparently, the man who mapped out Newfoundland, Captain James Cook, had a knack for giving humorous and, in instances, offensive names to the towns he was tasked with.

Humor20 of the weirdest and most unfortunate place names in the world
Tagged
Languages Maps + Infographics Denmark
What did you think of this story?
Meh
Good
Awesome

Say YES to these 6 lesser-traveled cities in Europe

This tiny Danish town is getting Western Europe’s tallest skyscraper