According to the Pew Research Center, and as of March 2017, 70 countries out of the world’s 195 have had female leaders.

There are currently 15 women head of states or governments in the world and eight of them are the country’s first female leader. 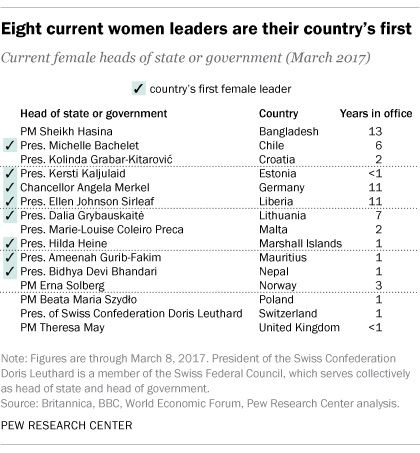 You may notice that two female politicians are not included on the list above. According to the Pew Research Center Aung San Suu Kyi of Burma (Myanmar) is “barred from becoming Burma’s president because her late husband and children are foreign citizens; instead, she holds the newly created position of state counsellor”. Taiwanese President Tsai Ing-wen did not make the list either as Taiwan’s sovereignty is still a matter of debate.

ActivismThe Best Countries for Women To Live In
Tagged
Maps + Infographics
What did you think of this story?
Meh
Good
Awesome