The sandwich is a staple of American food culture. Who, exactly, created this ever adaptable food is up for debate (was it truly the famed Earl of Sandwich, or is there some truth to the origin story involving Ancient Roman street food?), but there’s no denying that the United States has fully embraced all things sandwich.

It’s easy to see why: The country is home to some of the most delicious versions of bread-filling-bread out there. And the US largely has its immigrant communities to thank for that.

Immigrants from France, Italy, Cuba, Germany, Spain, and elsewhere have all lended a hand in crafting the best sandwiches in the US. After all, every culture around the globe has its variations on the sandwich, from South Africa’s Gatsby to the Caribbean bokit and beyond. Sandwiches in the US got regional twists wherever people were making them.

These 10 region-specific sandwiches epitomize the melting pot mentality of the US and have since become as American as apple pie.

The influence here is in the name. This sandwich leans on Italy’s famous cured meats and Provolone cheese that’s topped with fresh vegetables and olive oil and Balsamic vinegar for a filling. All of the goods are nestled in a light and fluffy Italian loaf. Today, you can procure this popular sandwich in practically any town in America, but the best of the best are found in New England — and, according to legend, so is the original. Legend has it that Italian baker Giovanni Amato created the sandwich in 1899 in Portland, Maine, according to New England Today. What was once designed as a portable, inexpensive working person’s lunch is now ubiquitous.

Where to try it: Monica’s Mercado in Boston quite possibly makes the very best cold sandwich in America — certainly in the case of Italian cold cuts. Walk into the shop and your senses are assaulted with the lingering smell of fresh-baked loaves and cured meat. It’s a little slice of sandwich heaven. 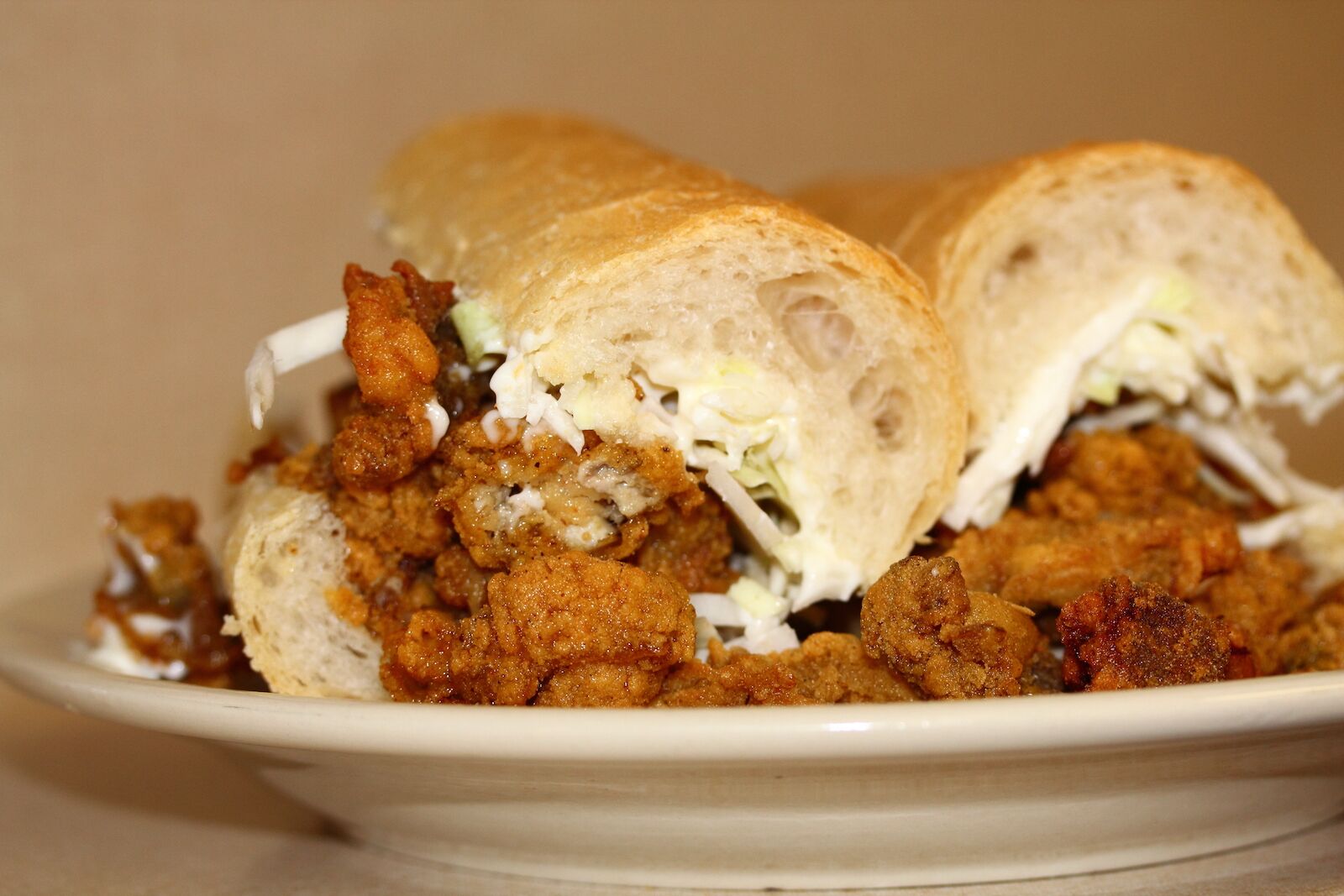 Short for poor boy, this sandwich is made by packing a crisp on the outside, soft on the inside New Orleans style French loaf with fried shrimp, crawfish, or oysters. The name comes from the first patrons of the sandwich; hungry streetcar workers on strike. The story goes that the Martin brothers invented the sandwich to feed the streetcar workers for the duration of a strike despite the fact they couldn’t afford to pay.

Where to try it: Po’boys are common in gas stations all across Louisiana today. But for the tastiest version done the classic way, you’ll have to pay a visit to Parkway Bakery and Tavern in New Orleans. Order your sandwich “dressed” and topped with lettuce, tomato, and mayonnaise.

3. Fry bread from the Southwest

While the rest of the sandwiches on this list were largely inspired and created by immigrant communities, sandwiches made with fry bread are the opposite. When the Diné Indigenous peoples were displaced and forced to walk 300-miles to internment camps by the US government, they were given army rations of flour, sugar, lard, and salt. With it they made crispy and fluffy fry bread out of necessity. Today, you’ll find it topped with sweet ingredients like pumpkin or sugar, but the slightly sweet dough also lends itself extraordinarily well to ground beef, lettuce, tomato, and onion.

Where to try it: You’ll find high-quality fry bread all across the Southwest, particularly on or near Native American reservations in Arizona and New Mexico. It’s most often sold at roadside stands rather than sit-down restaurants. 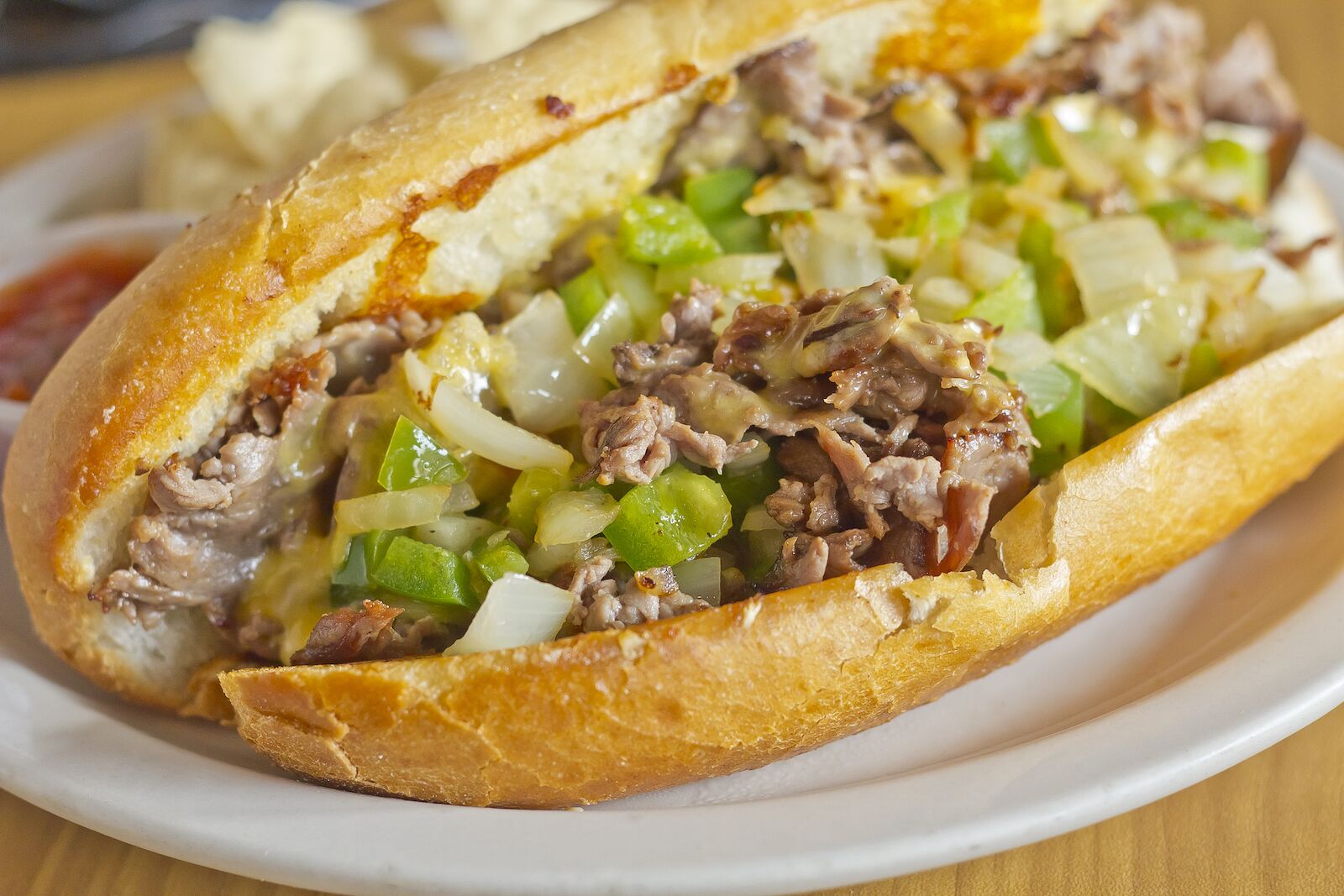 Popular and seemingly simple sandwiches can rarely be traced back to one person, but the title for the original first Philly cheesesteak is most often given to Pat Olivieri from Pat’s King of Steaks. In the 1930s, Olivieri was running a hot dog stand in the open-air Italian market when he decided to try a new concoction of caramelized onions and thinly sliced rib-eye grilled up on his flattop layered on a thick white hoagie bun. The cheese came almost 10 years later (these days there are people who prefer melty Provolone and those who opt for Cheese Whiz).

Where to try it: Today you can grab a classic cheesesteak on seemingly every corner in Philadelphia, but John’s Roast Pork stands out. Not just in flavor, but in atmosphere. Open-air seating on communal picnic benches creates a social environment much like the Italian market the sandwich was first created in.

5. Pimento cheese sandwich from the South

Where to try it: Today, you can find the cheese on the shelves of any reputable Southern grocery store to make the famed sandwich at home. Perhaps no where is a more famous to order one, however, than at Augusta National, the home of the Masters gold tournament. 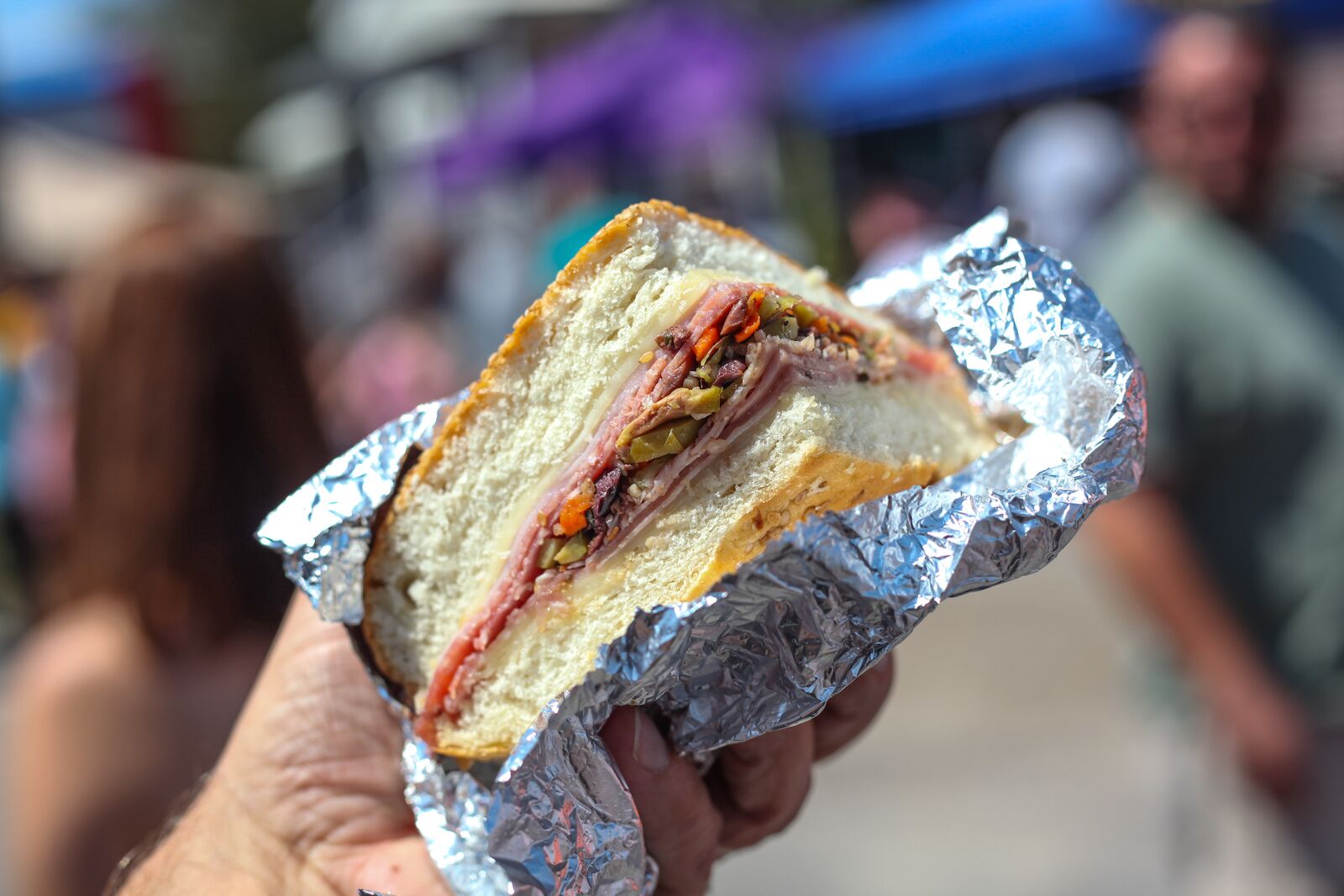 Every inch of this circular sandwich is Italian, from the round Sicilian sesame loaf to its signature olive spread. Yet you won’t find the muffuletta anywhere in Italy. That’s because this colossal sandwich is a New Orleans creation. The Sicilian owner of Central Grocery noticed the Italian immigrants purchasing all the familiar ingredients from their homeland to enjoy separately. In a “Eureka” moment he put them all together to create an instant bestseller in his community.

Where to try it: The muffuletta is still served over the counter at the Central Grocery in the French Quarter of New Orleans 100 years later. Consider this a must-eat.

There are competing theories on whether the Rueben was created in a New York City deli or at a poker game in Omaha, Nebraska. The world may never know the truth, but we do know that the Reuben — made with sliced corn beef, swiss cheese, Sauerkraut, and dressing piled onto rye bread and grilled to buttery crisp perfection — is now a staple in every New York Jewish deli worth its salt.

Where to try it: New York’s Court Street Grocers makes about as perfect of a Reuben as you can get. 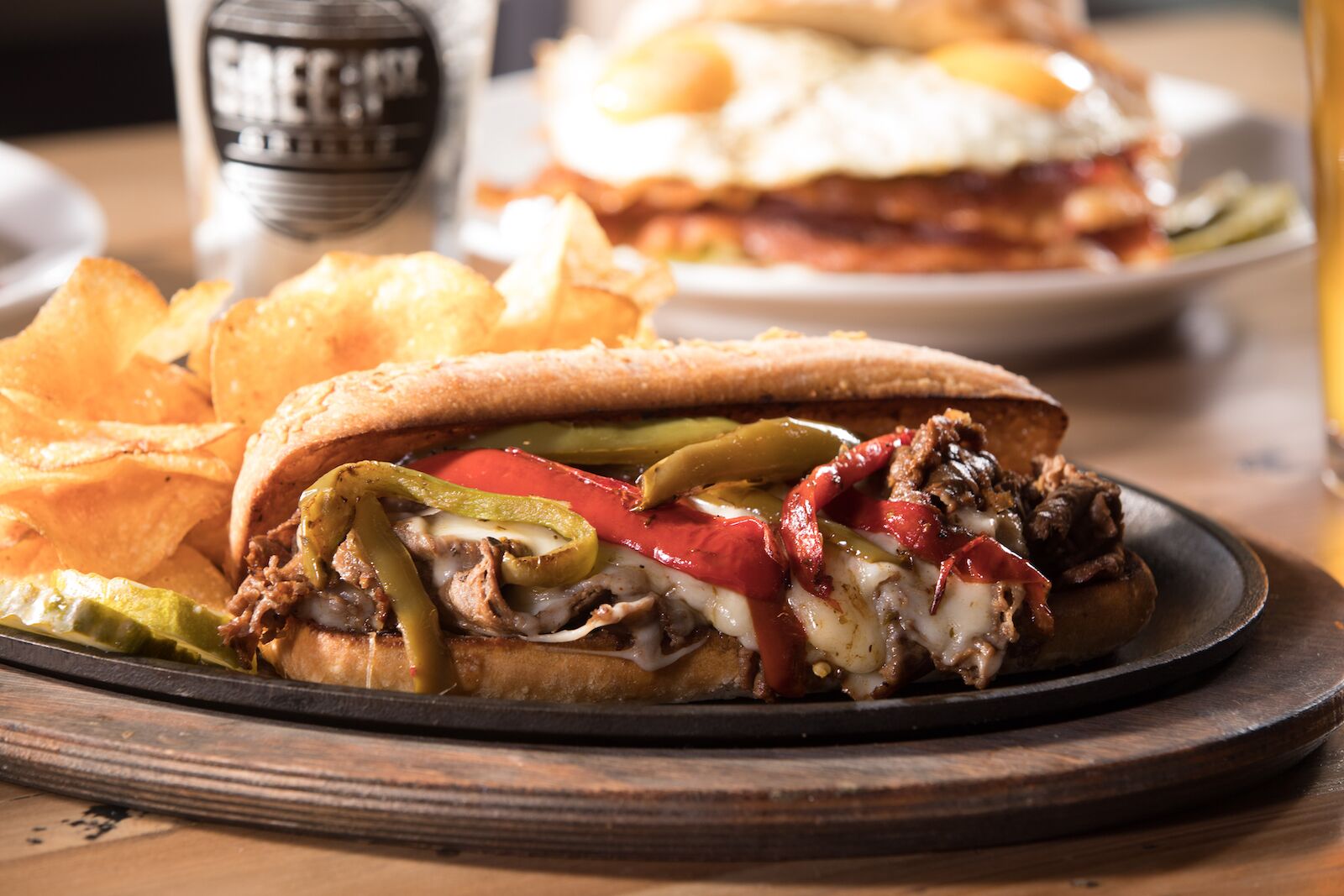 Without Italian immigrants in the early 1900s, the sandwich scene in the US would lose a lot of great flavors. This cheap Chicago favorite comes from Italian stockyard workers who were earning a meager wage. They often brought home the tough meat from their factories that couldn’t be sold and turned it into deliciously spiced and thinly sliced sandwich material. It exploded in popularity after it became a wedding staple, due to its affordability when feeding large crowds.

Where to try it: Al’s #1 Italian Beef has locations all over Chicago and has proven since 1938 that it can make a mean-but-messy lunch favorite. Don’t forget to get it dipped with hot peppers.

Don’t get this confused with Chicago’s syle of roast beef sandwich. In New England, the sandwich is made with a soft, often sesame seed-covered roll stuffed with thinly sliced roast beef cooked medium-rare, covered in melted cheese, and if you so choose, drizzled with mayo and barbeque sauce. Edible Boston writes that Kelly’s is hailed as the original creator of this region’s version of the roast beef sandwich as we know it today. The style pays homage to both its Irish and Massachusetts heritage serving the sandwich alongside lobster rolls, corned beef, and fried clams for a true mish-mash of New England culture.

Where to try it: Kelly’s. This local chain is also the inspiration behind Arby’s signature roast beef sandwiches. 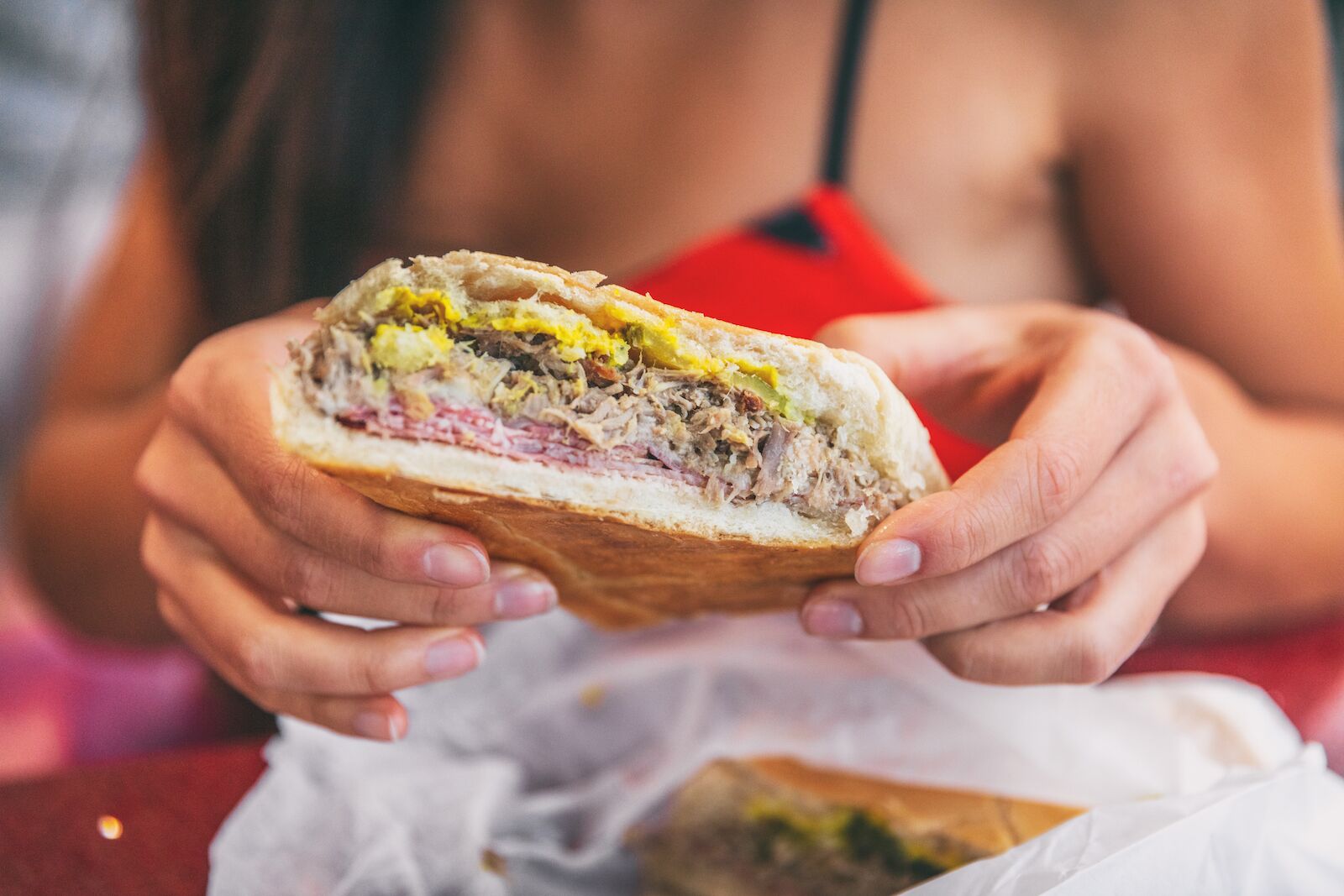 You would be forgiven for assuming that the Cuban sailed its way to the States from Cuba. But really, it was the brainchild of Cuban-Americans. In fact, the pressed sandwich made with ham, pork, Swiss cheese, salami, mustard, and pickles can be traced back to Tampa.

Where to try it: There are many places that serve the perfect Cuban throughout Florida, but for one of the best of the best head to Sanguiche de Miami in Little Havana.