Not so very long ago, Airbnb was literally some guys renting space on their air mattresses in San Francisco to make rent. In the 13 years since, it’s turned into a multi-billion dollar company and made itself a verb, like Uber (or Xerox if you were born before 1975). All the while giving us access to homes, apartments, and all kinds of unusual lodgings we’d have never been able to rent otherwise.

But of the tens of thousands of rentals on Airbnb, some are exceptionally aspirational. And as we collectively dream of where we’ll go the next time we travel, Airbnb compiled a list of its most-wishlisted property each year since 2011. They’re all still available too, so if you’re dreaming of sleeping in a shell or solar-powered house in the California desert, read on for last decade’s coolest places to rent. 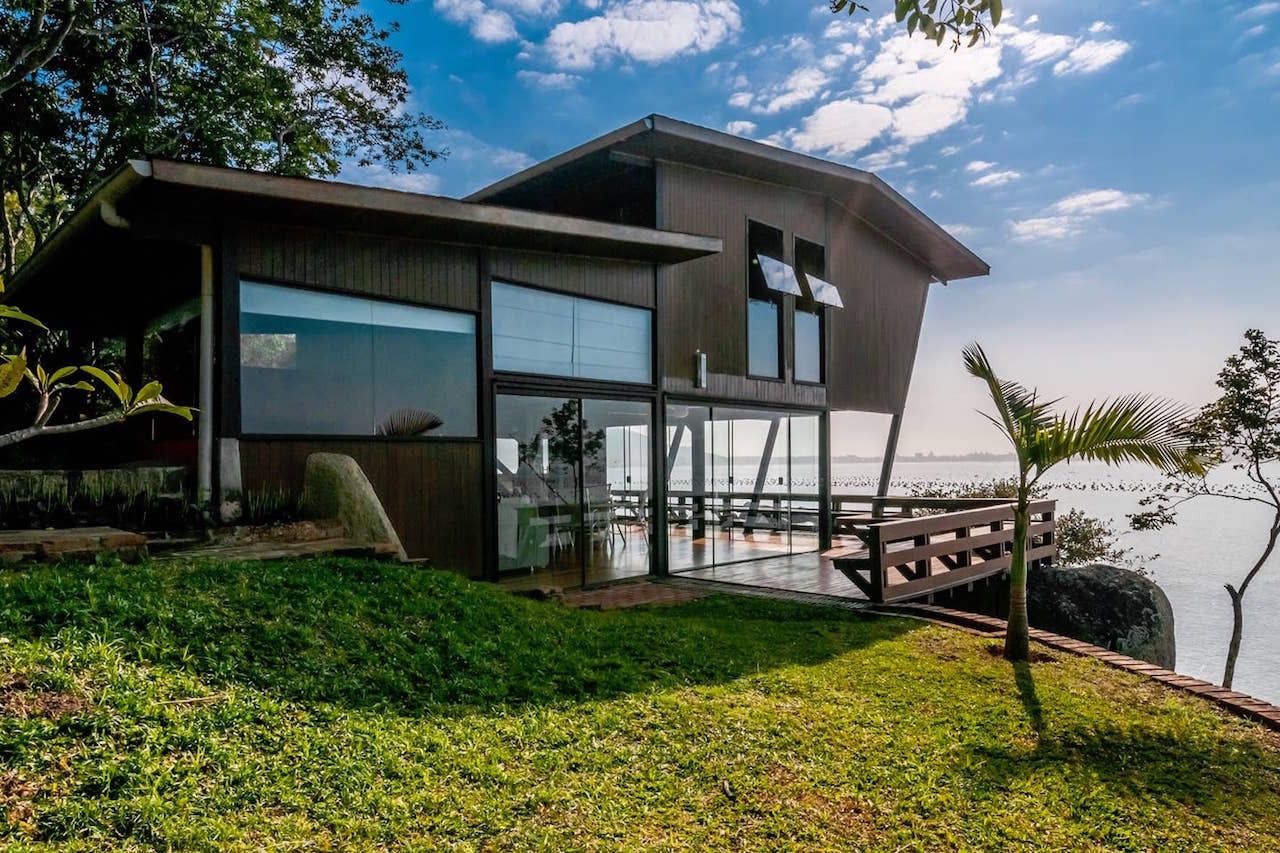 Brazil’s most famous beaches are also often among its most crowded, but you can enjoy the pristine nature of Florianopolis from this five-bedroom home set on a beach in a private park. You’ll have to find at least three other people to share it with you (or at least pay for three more people) as the home has a four-person minimum, but what you get is an entire home of floor-to-ceiling windows with modern kitchens and bathrooms. Views abound from almost everywhere inside, where you can cook dinner while watching the sun glimmer off the water nearby.

You’re only about a day’s drive from Iguazu Falls, though if you want to stay here over Christmas or Carnival you’ll need to stay about a week. You’ll also find two similar houses on the property, in case this one is rented on your desired dates. 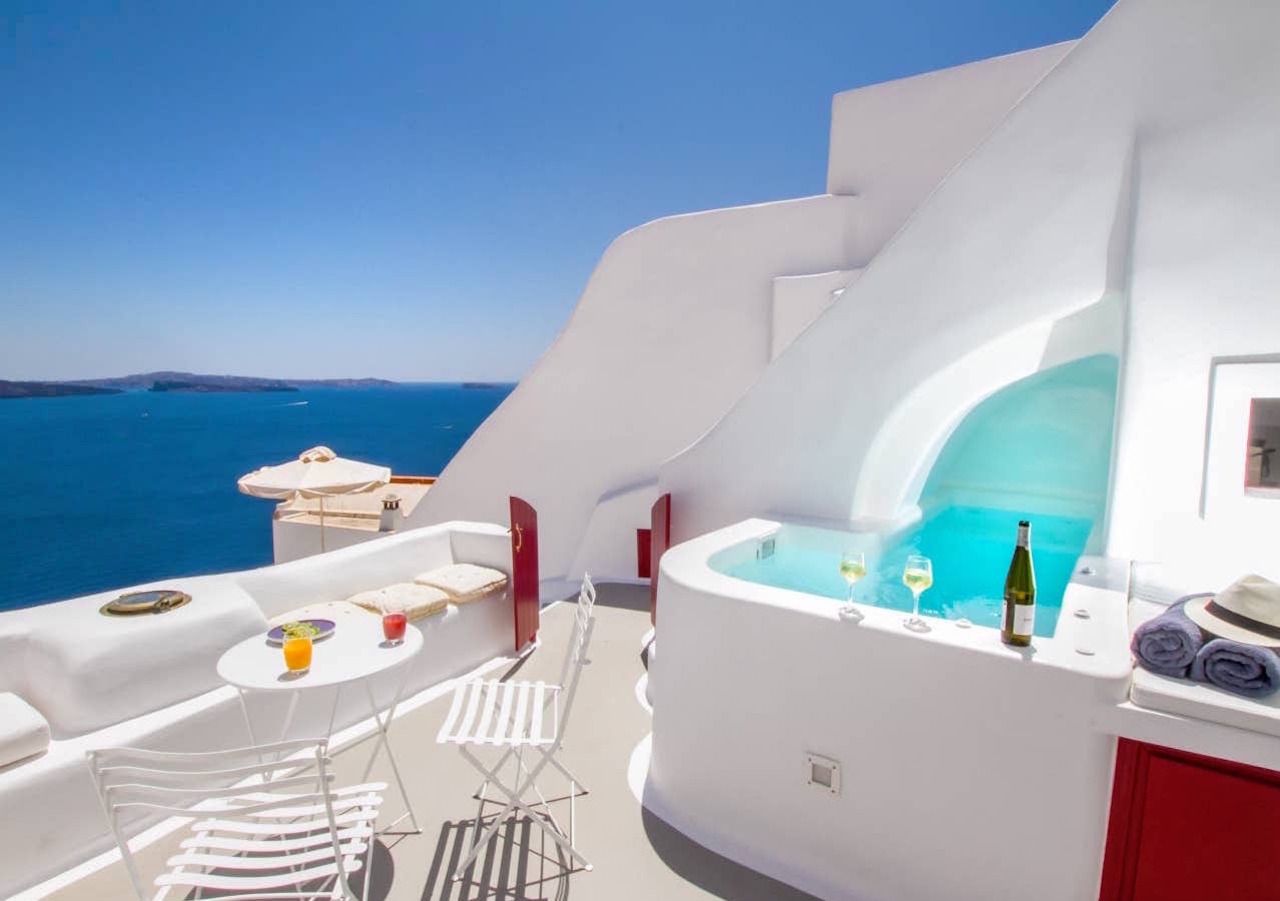 Since it appears Greece will be open for business this summer, perhaps you should consider attempting to salvage 2020 at this house which was carved into a caldera cave 250 years ago. A one-time wine cellar, it’s now a cozy 645-square foot house with a king bed set up in a loft and a spacious living area complete with fold-out couch. Ideal for a honeymooning couple, it’s also got a private outdoor terrace with a non-heated plunge pool where you can sip wine while enjoying the views of Thirassia Island. The kitchen leaves a little to be desired — you won’t find much past a mini-fridge and a microwave — but with all of Santorini as your backyard, cooking probably wasn’t on the agenda anyway.

The cave house has proven so popular two additional caves have been renovated inside the cliff and are also available for rent. The Hector Luxury Cave and Hector Caldera Nest Room sit off the same path in Oia Village and offer similar experiences if this place is booked. 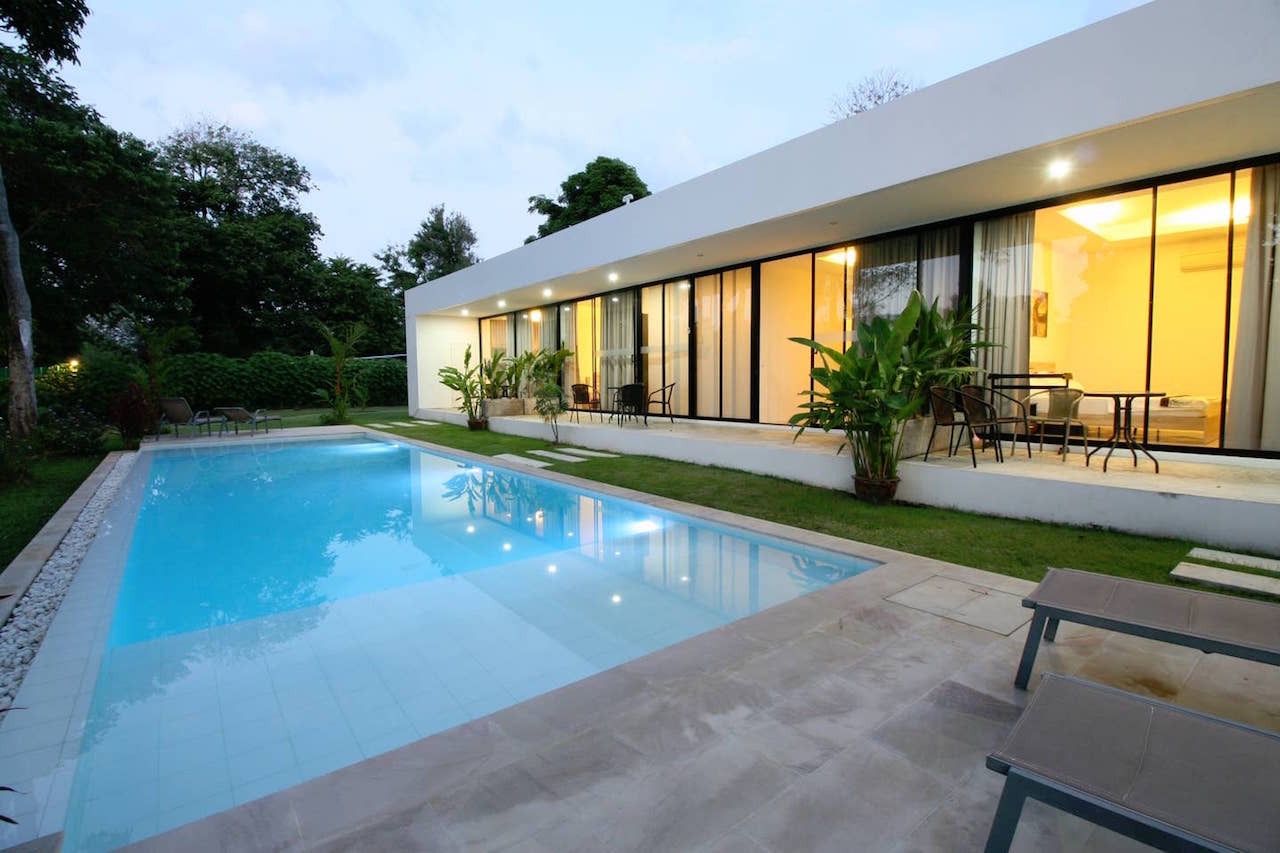 Renting a cheap apartment in Thailand doesn’t have to mean sleeping under a ramshackle roof and waiting for the ocean breezes to cool you off. Sometimes it means moving from the air-conditioned comfort of your bedroom to the tranquility of a private swimming pool like you will at this three-apartment villa in Promthep Cape, a short walk from both Ya Nui and Nai Harn beaches. Each private apartment has its own terrace and direct bedroom access to the shared pool, as well as the lush gardens that fill the remainder of the opulent property.

Other amenities include fiber optic internet and ceiling fans in the living room and kitchen, which has a flat range and full refrigerator if you want to make meals to bring to the beach. You’ll also avoid the noise and parties that sometimes accompany private rentals in Phuket, as quiet hours begin at 10:00 PM, and parties and sex tourism are strictly prohibited. 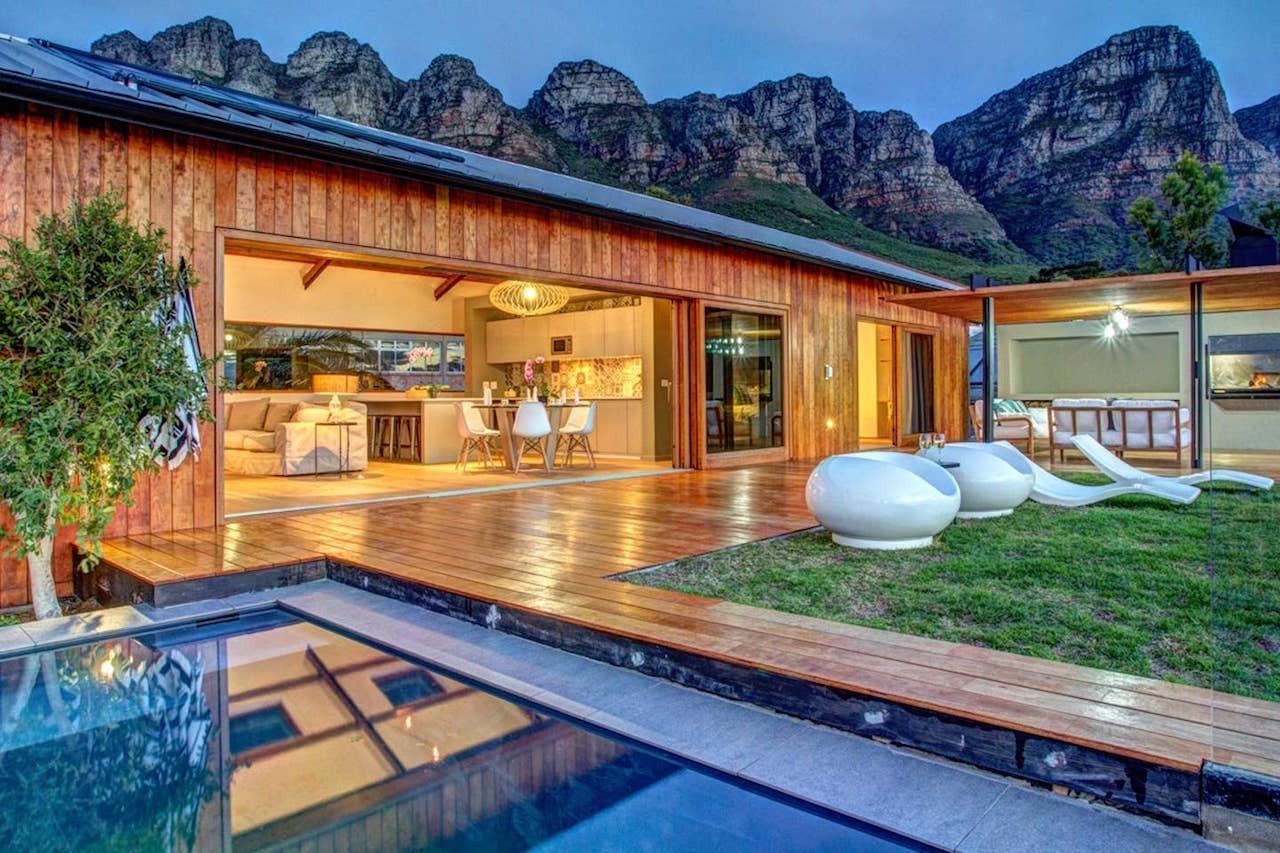 In Cape Town’s beachy Camps Bay, you’ll find this appropriately named three-bedroom suite where every room offers a view of something. The master bedroom has a front door that frames Lion’s Head rock, with a king-sized bed looking out onto the ocean. The other bedrooms aren’t bad either, each with views of the water and/or Lion’s Head and the 12 Apostles. Each bedroom also has a private bath with granite shower too, and the suite’s only about 10 minutes’ walk from the beach.

The private terrace has two couches aimed towards the Atlantic Ocean, next to a flat-screen TV and private plunge pool. You’ll also find lawn chairs and pod seats on the adjacent lawn if you want to get some sun while you enjoy the view. Need more space? No problem. Everview has a studio and bungalow which offer additional bedrooms for your big party. 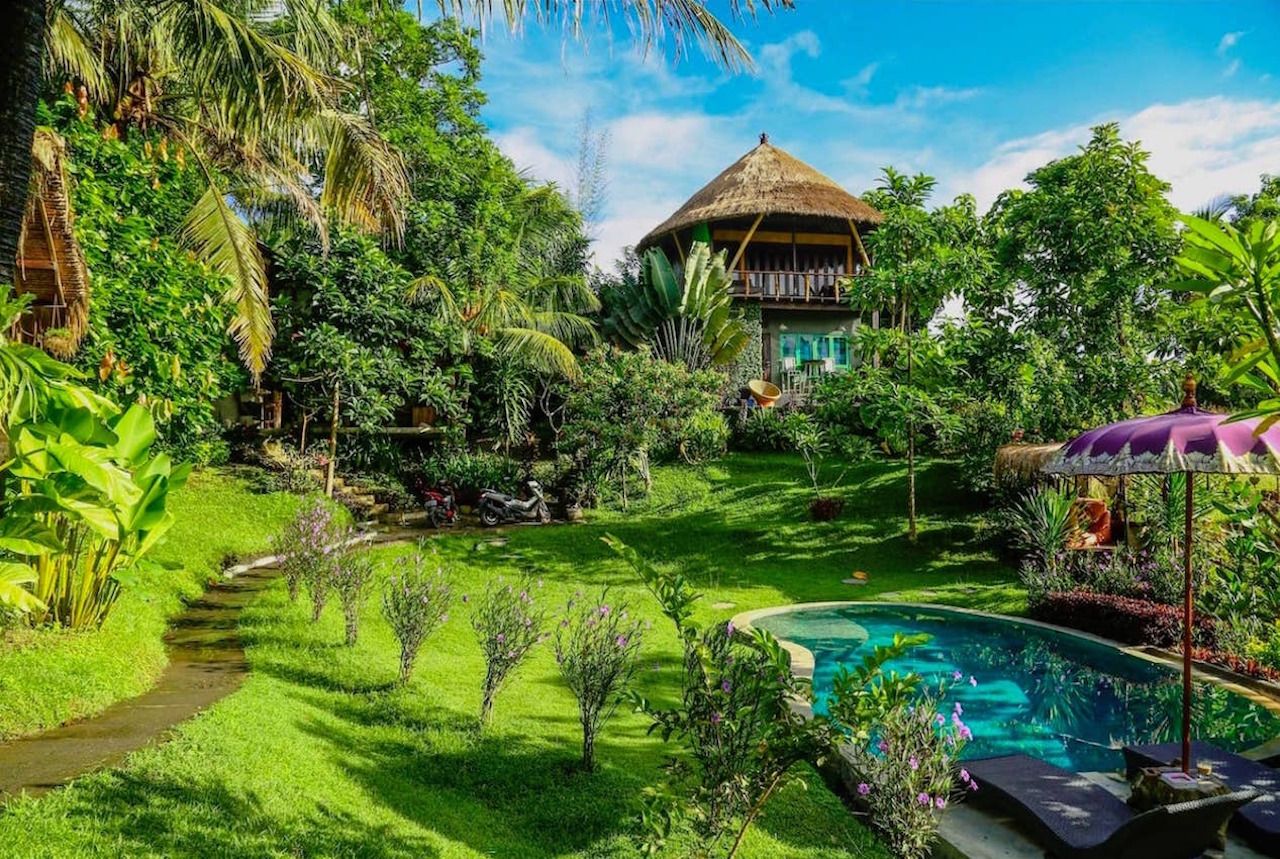 Sometimes the authenticity of an Airbnb just feels better than posting up at a luxury hotel, which you’ll discover at this treehouse overlooking a private turquoise pool and sprawling tropical garden. Were it part of a hotel it would likely cost 10 times the price and feel a little removed from the local culture. Not the case here, where the two-story treehouse’s posting makes it clear that keeping the place sterile is practically impossible and encourages you to stroll into the nearby village and try its home-grown restaurants.

The property itself is stunning, with perfectly manicured gardens and a four-post daybed with curtains to shield the hot sunshine. Near the bed, you’ll find a private veranda ringing the upper level of the treehouse, from which you can survey all the tropical glory below. From downstairs, you can enjoy the A/C and high-speed internet in the bedroom, as well as the flat-screen TV — which boasts “a few channels.” 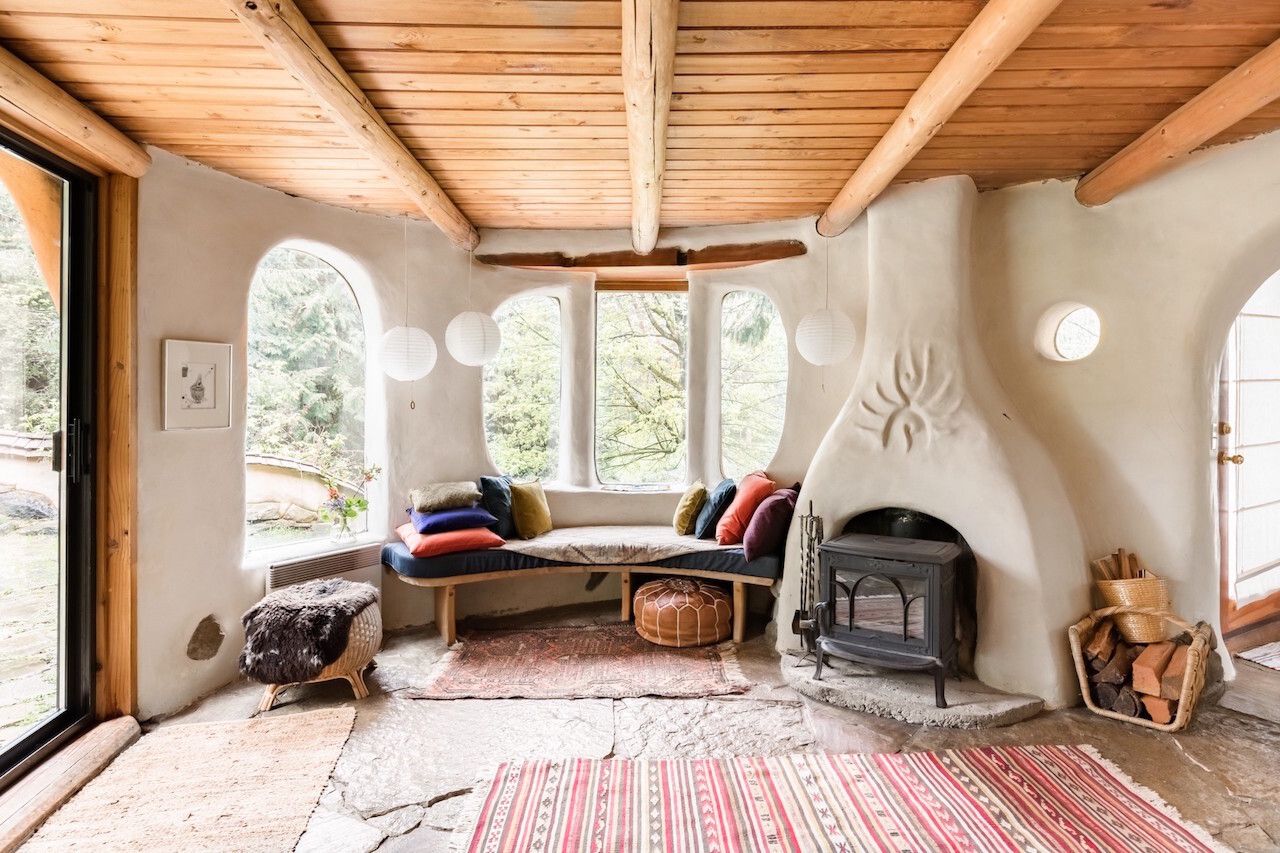 You’ll feel at one with the wilderness of British Columbia while staying in this two-story, one-bedroom cottage that blends in seamlessly with the woodsy surroundings. It looks almost like a mushroom house from a fairy tale but is in fact made of wood native to the area with curved beam ceilings and cantilevered stairs. Your bedroom sits in a loft over the main floor, with a private mini-balcony with direct views into the forest. And the ground floor boasts a kitchenette with mini-fridge, microwave, and loads of counter space.

Outside you’ll find a fire pit with a couple of chairs and a hammock to enjoy during the day or use for evening naps. Though the cottage is remote (it’s about two hours from Vancouver), it still comes with WiFi, since you’ll need something to do once the sun goes down and the fire burns out. 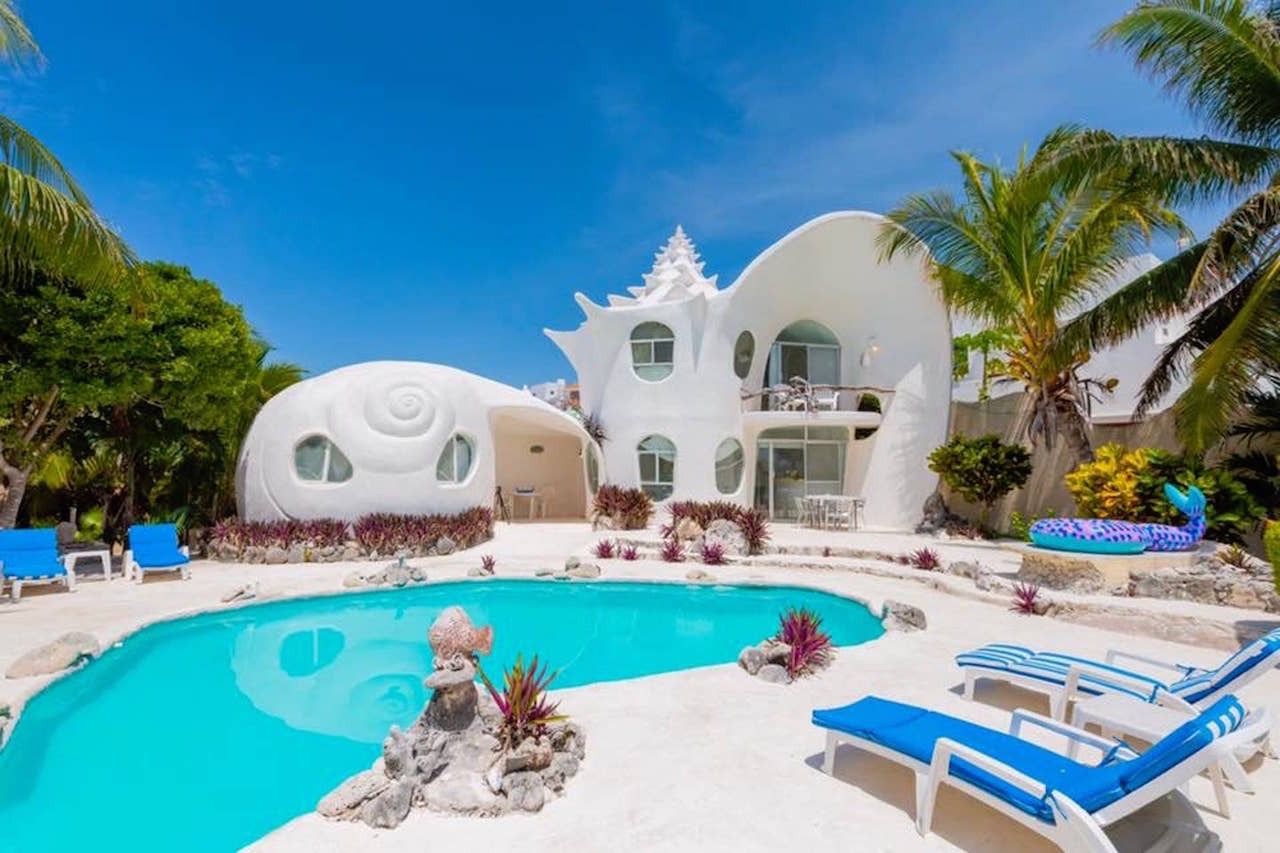 Local legend tells of a rivalry between the fisherman of Isla Mujeres and Isla Holbox, where the men of Mujeres claimed to have the largest shell in the world and sold it to a gringo after making ceviche for the whole island. That gringo still lives in the shell in a gated community, and tourists stop by on golf carts daily to see what’s going on inside. That last part about the tourists is the only element of this legend that’s true, as the island’s famous shell house was built in the 1990s by architect Eduardo Ocampo as a vacation house for his artist brother. But gringos and non-gringos alike can live here — for a little while anyway — thanks to Airbnb.

The home itself has two bedrooms and two bathrooms spread among two “shells” set by a swimming pool. The upper balcony offers views of the Caribbean and everything inside from the mirrors to the living rooms chairs are either shaped like or made of shells. It’s an odd space that truly gives you as close a feeling as you’ll ever have to being a mollusk, and if you don’t mind tourists popping their heads over the fence to check out your house it’s a quirky, comfortable home for your Mexican getaway. 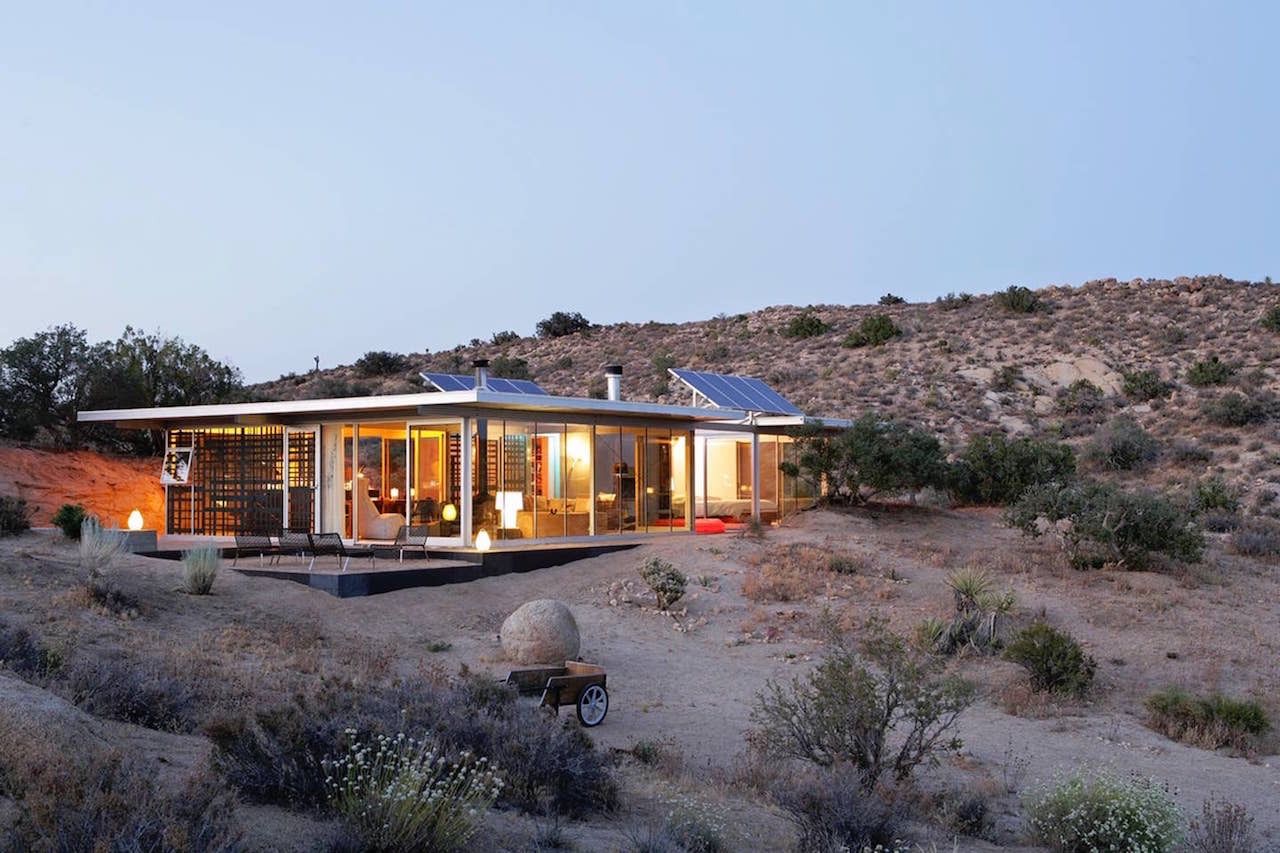 If you’re looking for a home-base to tour Southern California’s roadside desert oddities, perhaps consider this home the LA Times lauded as one of the best-ever homes in the region. The glass-walled house is a model of sustainability, fueled completely by solar power, with water brought in and heated by the sun and no municipal services. As such, hosts ask that you plan on not having power for part of your stay and prepare your meals using minimal energy.
It’s called the off-grid house for a reason, so don’t expect WiFii or cell service. Though that’s all the better to get out and enjoy the unspoiled desert around you, which beckons through the windows. The views are unparalleled, and the home’s use of light and shadow makes you feel like part of the landscape even when you’re relaxing at home. It has modern style and 21st-century technology while still giving you the feeling of desert pioneers who lived without any kind of connection. 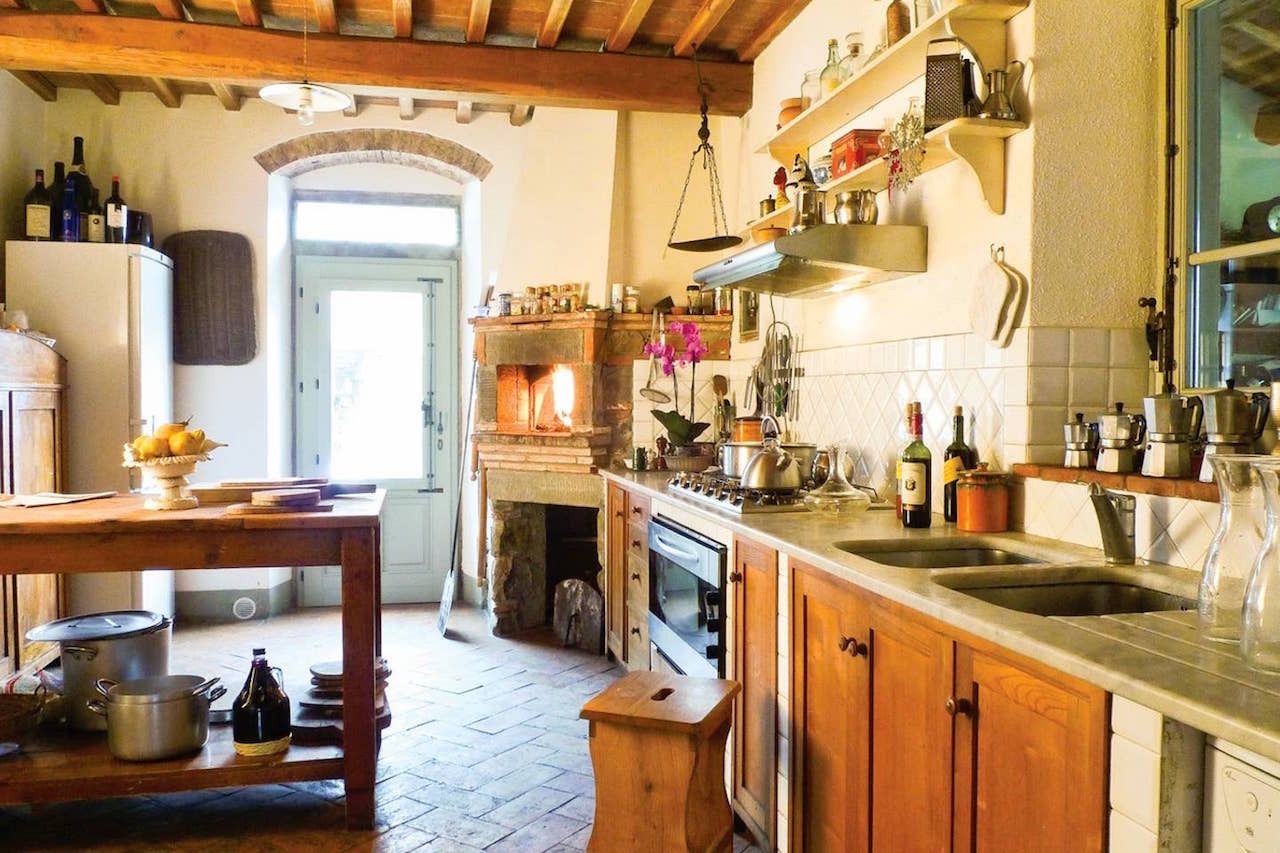 The decade’s first home to ever top Airbnb’s wishlist was, not surprisingly, a villa in Florence, almost a cliché in the world of aspirational travel. Still, this stone farmhouse in the Chianti hills holds up as a classic property, with olive groves and oak trees leading the way to the seven-bedroom slice of paradise. It’s a popular wedding spot with room for 16 guests, two wood-burning pizza ovens, and an outdoor barbecue. Plus a private outdoor amphitheater ideal for an intimate ceremony.

Outside the home, you’ll find tranquil Italian gardens that seemingly stretch to the hills beyond, as well as a small saltwater pool and oak solarium to soak in the Mediterranean sun. It’s part of a larger property that spans four acres and includes three more private villas. And though it all feels totally secluded, you’re only about 25 miles from Florence if you feel like experiencing some Italian city life as well.

NewsThe Top 20 Trending Travel Destinations for 2020, According To Airbnb
Tagged
Epic Stays
What did you think of this story?
Meh
Good
Awesome

This Airbnb in North Carolina Has a 75-Foot Water Slide Into a Lake
This Adults-Only, All-Inclusive Resort in the Dominican Republic Is the Epitome of Luxurious Wellness
13 of the Best Adults-Only All-Inclusive Caribbean Resorts
These Stunning Cabins Are the Ultimate Zion National Park Basecamps
This Vegas Resort Is the Ultimate Adult Playground for Sports Lovers