Pizza and politics are more similar than you’d think. Most of us agree that a nation needs a government to function, we just can’t agree on what kind. Well, people also need pizza to function, but we’re more likely to achieve world peace than agree on a universally beloved pizza style. We’ve heard all the debates and sampled all the candidates, registered our support for Brooklyn, apizza, Neapolitan, Chicago style, Greek, Sicilian, or flatbread pizzas. But one candidate has flown subtly under the radar, charming its local demographic for decades while largely avoiding the national stage: beach pizza.

Beach pizza has been an institution in Salisbury Beach, MA, since the 1940s. Named for its proximity to the beach rather than anything particularly “beachy” about the pizza itself, beach pizza became a local phenomenon on the Massachusetts North Shore thanks to its distinctly sweet flavor. It can be found pretty much exclusively in two shops that sit almost directly beside each other — Tripoli and Cristy’s.

You’ve probably never heard of beach pizza. You might be thinking, “How good could a pizza style be if it’s been around for 80 years and no one’s heard of it?” Well, the answer is complicated. Beach pizza is both unique and controversial, and its story is essential reading for pizza connoisseurs. After all, when it comes to the politics of pizza supremacy, you should have all the facts before you cast a vote.

The history of beach pizza

Like many world-altering inventions, beach pizza had a relatively humble beginning. It was created by a chef at Tripoli Bakery in 1944, which was then located in Lawrence, MA. A year later, Angelo Zappala, the bakery’s owner, expanded about 30 miles northeast to the coastal community of Salisbury Beach, where he opened a garage-door-style pizza stand. The family-owned business immediately took off, as the pizza proved popular among the summer crowds flocking to the beach. Soon after Tripoli set up shop, Cristy’s Pizza joined it on the boardwalk, moving in right next door.

Salisbury Beach proved to be the perfect home for beach pizza. In the 1940s and ‘50s, it was the closest thing New England had to a boardwalk amusement park in the tradition of Coney Island. Expensive beach homes, arcades, and popular performers drew crowds of people from farther inland. The beach was also home to the Sky Rocket, the country’s first modern roller coaster. These circumstances created a perfect storm for a fresh new pizza style.

Unfortunately, Salisbury’s popularity and prosperity wouldn’t last. By the 1970s, an economic downturn transformed the vibrant beach community into a ghost town. The Sky Rocket closed, beach houses were abandoned, and storefronts shuttered — but beach pizza endured. Though Salisbury never returned to its mid-century boom, Tripoli and Cristy’s have remained local staples, a testament to the power of pizza to transcend socioeconomic upheaval.

What is beach pizza, anyway? 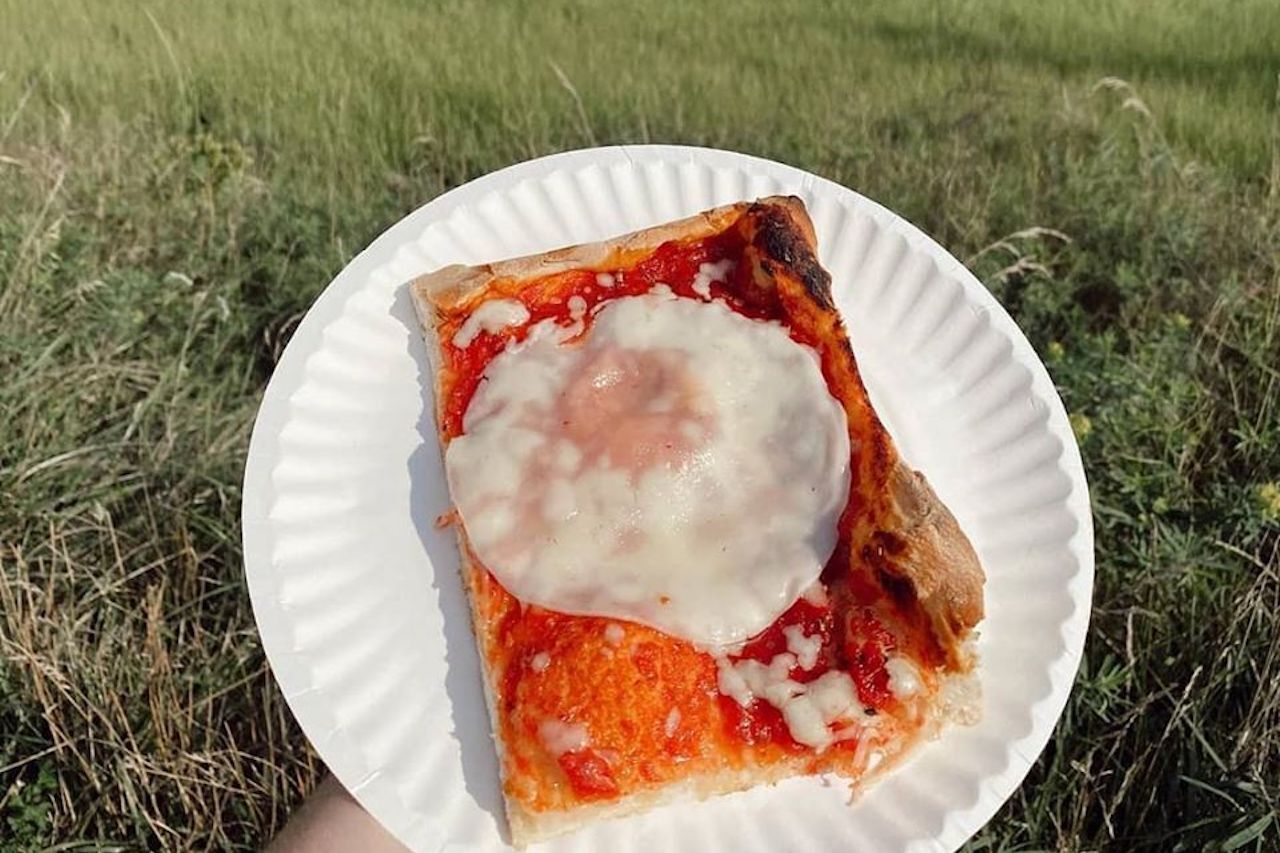 If you took your Italian grandfather to Salisbury Beach and bought him a slice from Tripoli, he might just drop dead of shame. Beach pizza is not for pizza purists. It’s a decidedly novelty pizza that managed to gather a devoted following. Once you try it, it’s easy to see why.

Beach pizza is a thin pizza with crispy, flaky crust, cut into squares. A traditional pizza is defined by the holy trinity of crust, sauce, and cheese, which are usually relatively equally balanced. Well, beach pizza doesn’t even pretend equality. It’s all about the sauce, so sweet it almost qualifies as dessert, often extending right up to the crust and overpowering the scant amount of cheese. Sauce is the foundation on which beach pizza is built. If you’re a sauce fan and don’t mind a kick of sweetness, you’ll love beach pizza. If you’re not, it’ll taste like sacrilege.

Tripoli and Cristy’s have slightly different approaches to beach pizza, but both serve up similarly spare slices with naught but a layer of sauce and some thinly grated cheese. It’s worth noting that you can ask for “extra cheese” on your slice, but that amounts to a single piece of provolone slapped on top, and likely won’t satiate a cheese lover’s appetite.

Tripoli and Cristy’s feud like the Hatfield and McCoys of Salisbury. The rivalry dates back to the 1940s, and it simultaneously keeps the Salisbury Beach community together and rips it apart. On any given beach day or summer night, you can find two parallel lines side-by-side extending from the pizza windows to the street. The only thing separating these two pizza giants is the Joe’s Playland arcade, situated right in the middle. So while Tripoli and Cristy’s carry on their decades-long feud for supremacy, children play in the arcade, poetically unaware that one day they’ll grow up and have to choose sides for themselves.

Tripoli is the OG on the block, and there’s no doubt that it has the bigger following. In addition to it’s patently sweet pizza, Tripoli is also famous for its cannolis and breads, so its diversity of options gives it somewhat of an — unfair, some might say — advantage. 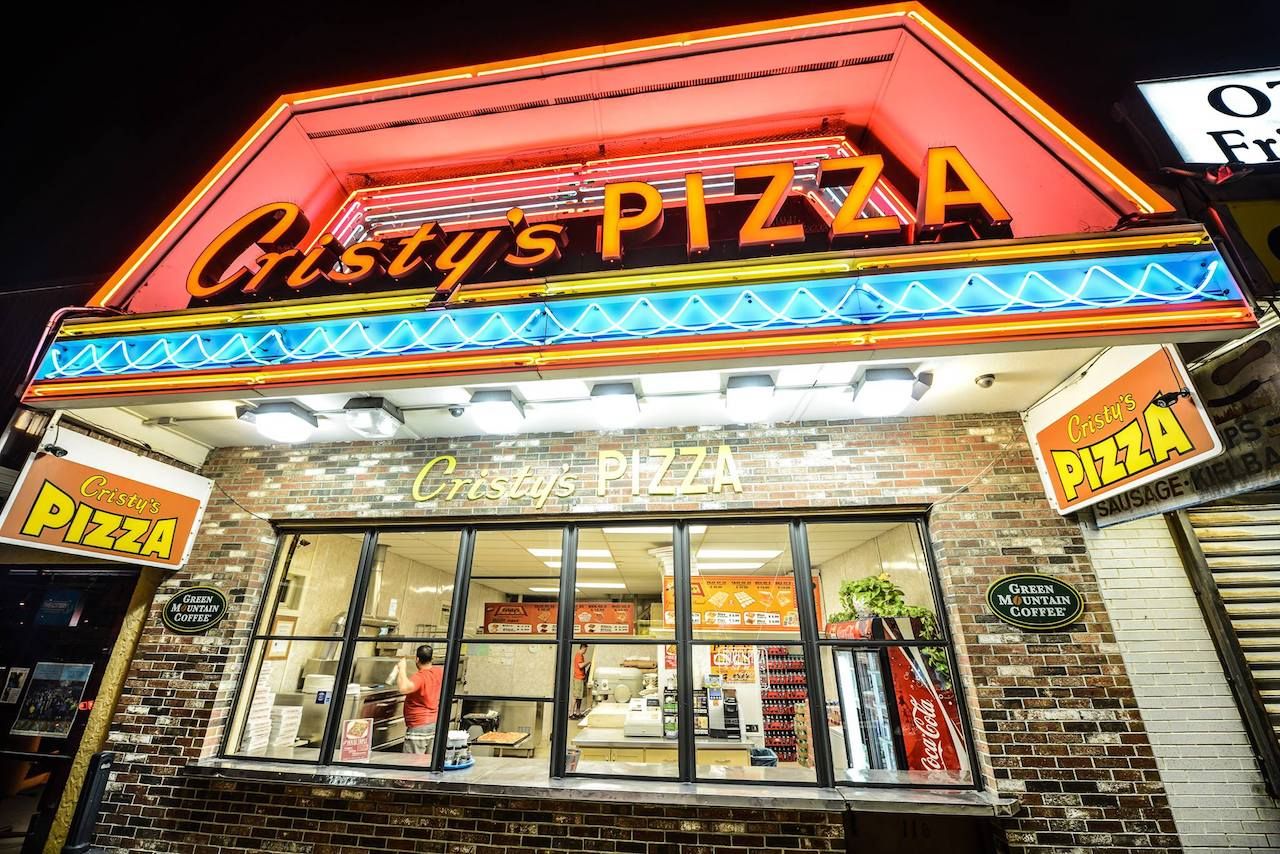 Cristy’s, on the other hand, doesn’t mess around with extras. It serves pizza, and only pizza. Traditionalists have to respect that. Its sauce isn’t quite as sweet as Tripoli’s, so it might be a better entry-level slice for those wary of dabbling in beach pizza for the first time.

Whichever pizza you prefer, be prepared to choose an allegiance and stick to it. Announcing your beach pizza preference on the North Shore is akin to walking into Thanksgiving dinner and loudly declaring your political views. If it’s 2:00 AM on a Saturday and you decide to make an offhand remark about Tripoli while enjoying a slice of Cristy’s at the picnic tables, well, the best-case scenario is you get cursed out by the entire Tripoli’s line. The worst-case scenario is you ignite a West Side Story-esque brawl. So think very carefully before cementing your preference.

Like most cultural phenomena, beach pizza doesn’t exist in a vacuum. It’s not just a drunk snack you grab as an afterthought when leaving SurfSide. It’s what made you decide to go out drinking in Salisbury in the first place. It tempts you to leave the bar before last call and get a good place in line. It’s where you bond with complete strangers over your collective love for Cristy’s and hatred of Tripoli. It’s ordering a box of 20 slices when you only need two, and arguing with your friends on the ride home — sauce flying everywhere — about whether beach pizza is actually worth the hype.

Make no mistake, beach pizza is subpar at best when viewed through the cold eyes of a culinary expert. When viewed as an institution, however, as a local tradition intertwined with the history and culture of Salisbury Beach, then it assumes a whole new significance. Beach pizza isn’t meant to be eaten while watching football, nor is it a wholesome family dinner. It’s the slice you grab at the beach when you’re not even hungry, but that you can’t resist when you smell that sweet sauce aroma drifting your way. It’s a food consumed in conflict, as loyalists from rival eateries hurl insults at each other.

Love it or hate it, it’ll make you question everything you thought you knew about pizza.