I have a vivid memory of standing on a beach in Cape Town when I was 20 years old. The sky was crystal clear, and a hard wind was sweeping down from Table Mountain, over the beach, and into the ocean. The wind was catching the dry sand so that we, standing just on the edge of the surf, were getting sandblasted on any patch of open skin. The gale then whipped out over the water, so that even as the waves broke towards the shore, their spray gusted back out to sea.

It was a surreal, beautiful, painful moment — I stood stock still, trying to breathe through the stinging sand, while my friends doubled over in laughter in front of me. I remember this as clear as day. But strangely, I remember myself in the third person. I do not remember being there, clenching my hands, holding my sandals, looking at my friends in front of me. No, I remember seeing myself from about 15 steps back and to my left. Something like this: 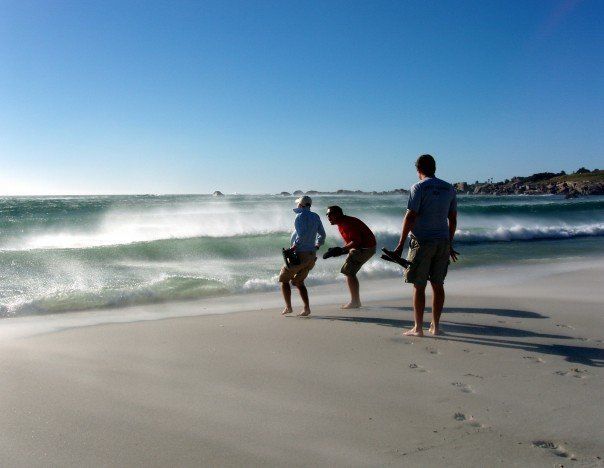 That photo haunts that trip. I can still smell the sea air, I can still hear the mountain breeze, and I can still feel the sting of sand on the back of my legs. But I can’t see any image of that day other than the one in that photo (and a few others that were taken at the time). The photos have cannibalized the actual memories.

Traveling without a camera

The internet loves wringing its hands about travel selfies and millennial narcissism, and while there are legitimate arguments against the Instagrammification of travel, those arguments tend to be focused on shaming people who have behaved badly or have inflicted damage on themselves and their environment. The girl who tries to take a selfie with an ancient statue and breaks it in the process; the guy who wants a selfie in Yellowstone, goes off the trail, and sinks into a pool of boiling mud; the crowds of Instagrammers who want the perfect shot of Horseshoe Bend in Arizona and are straining the park’s resources by flocking there by the thousand.

For me, though, the decision to stop taking photos while traveling was a personal one. Travel was a priority for me throughout my twenties. I obsessed about upcoming trips. I’d buy maps and plot routes, I’d live like a monk to save money, and I’d read everything I could on the next destination. What would be the point of doing all of that if I had no real memories of the trip? Was proving to other people that I was there and had the photographic proof more important than actually remembering the thing that, at the time, I told myself I lived for?

So I stopped bringing cameras. I obviously still had a phone, and if I met up with friends, I’d take pictures with them, and I would take pictures of things like funny signs if I thought of someone back home who would appreciate it. I never became so extreme that I would allow other people to take pictures of me. But if I was on a trip and I saw something beautiful, I would stop myself from reaching for my camera, I’d drink it in, and I’d hope that my memory would hold onto the moment.

Living in the moment

As a writer, I may be predisposed against photography. Photos can be a crutch when you’re writing (why try to describe a place when you can just show it to people?), and I’ve never used photography as a way to express myself artistically. For me, photography is an act of acquisition and release: it’s proof that I’ve been somewhere, it’s an excuse for me to move on to something else I want to see.

And that’s the point — the most important thing you can do when you travel is whatever brings you fully into the moment. If you’re a compulsive picture-taker and bucket-lister, consider leaving the camera at home. Instead, when you see the sight that you want friends and family to know about, pause. Take it in. Notice the sights, smells, and sounds. Notice the emotion you’re feeling. Notice the weather, the looks on other people’s faces. And then consign all of that to memory. You may forget it, yes. But it’s better to have something and lose it than to never have it at all.

Travel10 Reasons To Get Off Facebook and Into Nature
Tagged
Travel
What did you think of this story?
Meh
Good
Awesome