If you grew up on locker jokes, opposite sketches, and taking the physical challenge, at some point in your life you probably dreamed of getting doused in Nickelodeon’s trademark green slime.

Or maybe you didn’t. I don’t know.

Either way, the social-media-installation craze has provided you the chance to do it, as Nickelodeon launches its first-ever pop-up experience, Slime City. Appropriately, it opened last week in Miami.

The 20,000-square-foot tribute to green slime is an hour-long tour de force in viscous green stuff, re-imagining slime as everything from a wall to a lava lamp to slime sand.

“We wanted to sort of re-imagine slime, how it might come to life in all its various forms,” said Slime City spokesperson Sharon Cohen from the shores of Slime Beach. “Obviously there’s touching and feeling slime that everyone is familiar with, but we also wanted to have slime come to life like if it was a lava lamp, or a great wall of slime, or if slime took over a nightclub.”

Though it could be argued slime took over nightclubs years ago, the point is not lost. And the experience is an absolute immersion in Nickelodeon’s green stuff that allows you to live like you were a kid again in a world you once imagined.

Touring Slime Beach, a slime lounge, and the Great Wall of Slime

Slime City takes groups of about 20 people through the installation every 15 minutes. The trip begins in a dark, green room where the group huddles around a giant green shower nozzle and watches a short video on how to behave in Slime City. No eating. No drinking. Keep your phones ON.

Once finished, guests get their first experience with touching slime in Slime HQ, a series of pipes and levers where you can stick your hand in fluorescent-looking slime for your first photo op of the day.

“Go ahead,” Cohen said as we approached the first slime fountain. “You can do it.”

I stuck my hand into the fountain like it was bright green fondue and felt the warm, gelatinous stuff coat my fingers. It was a little like a thin pudding that, when illuminated by Slime City’s blacklights, created a trippy effect coating my skin.

After I’d posted to my Insta story, I was handed a towel and moved on to Slime Beach. Here, a pastel rendition of the Miami skyline was wrapped around a fine green powder sand with a merry-go-round and rideable toy animals. The slime sand felt, not surprisingly, just like sand. 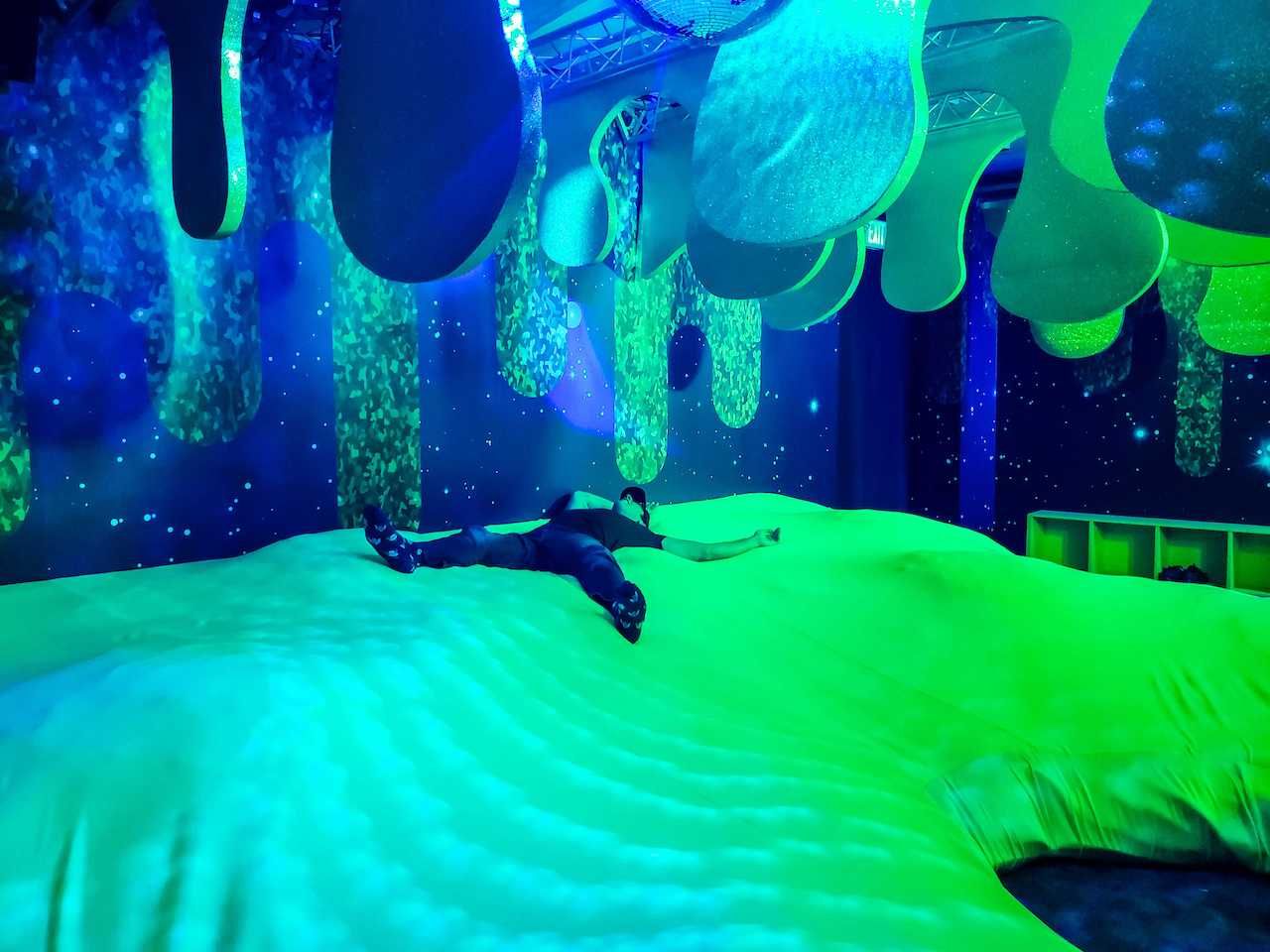 Behind a wall near the beach sat the Slime-down Lounge, which Cohen explained as an imagination of slime as a lava lamp. It was, in essence, large mounds of rolling memory foam lit up in green and purple blacklight. I jumped right onto the slime-foam mattresses and sank into it like I was becoming one with the slime, then rolled around to fully get lost in its soft, slimy embrace.

Just a reminder, folks, no drugs are allowed in Slime City.

From there it was off to the Great Wall of Slime, a concrete, solid imagination of slime where you could leave imprints of yourself in a wooden-peg wall. The resulting Insta stories look a little like that gif of Homer Simpson disappearing into the hedges.

Spending the night in the Slime Light Club 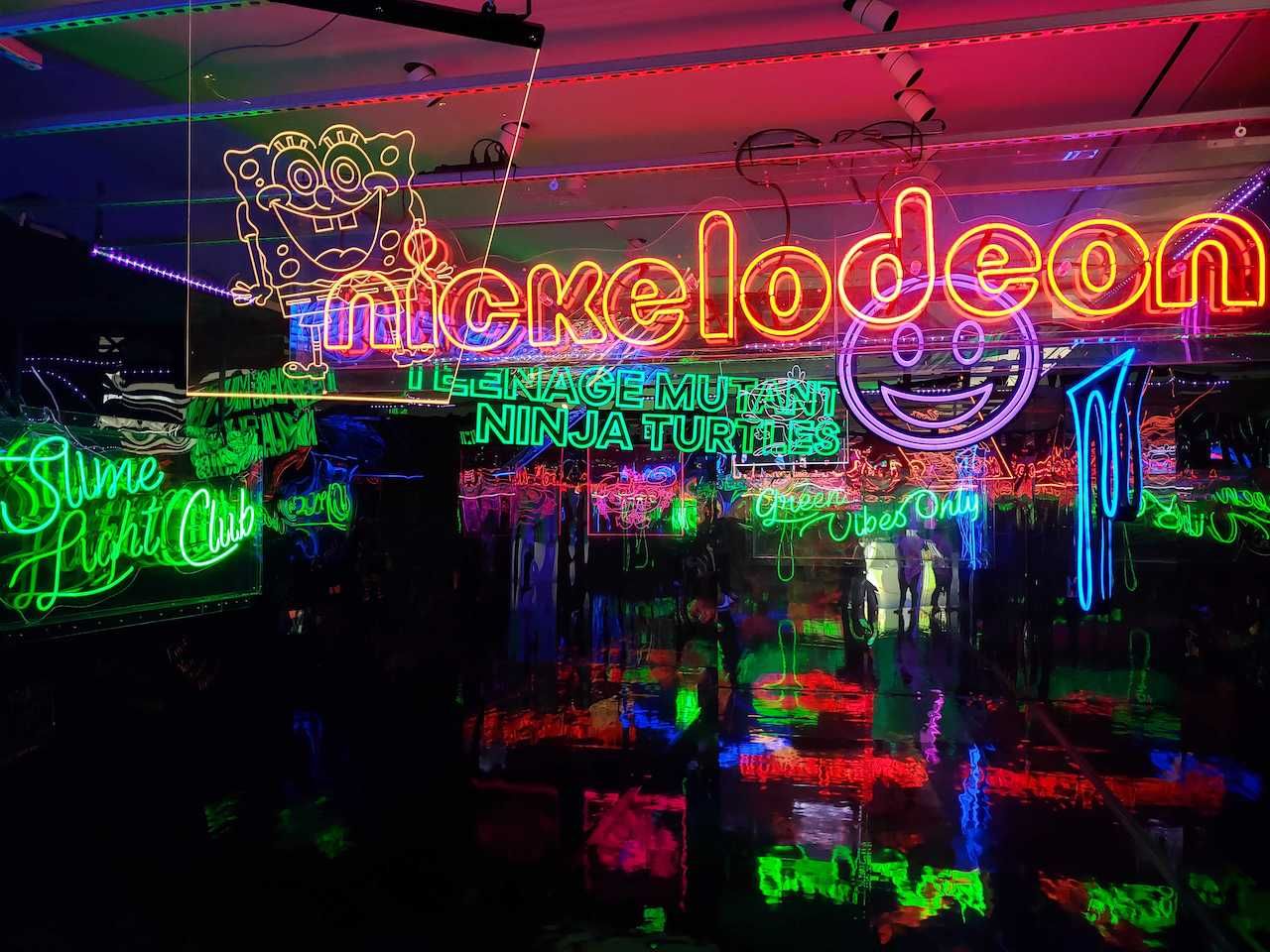 Down a Rugrats and Ren and Stimpy-lined escalator, you’re dumped in Slime Light Club, a sea of Instagrammable neon signs like the ones you find in literally every bar or restaurant that’s opened in the past two years. But instead of sage sayings like, “You are exactly where you’re supposed to be,” Club Slime has signs for the Teenage Mutant Ninja Turtles, SpongeBob, and dripping neon slime. It’s also equipped with blacklight pens, so you can write your own social media-friendly words of wisdom on the wall.

Inside the club, you’ll hear the faint voices of a crowd counting down from five to one, the certain sign that you’re close your lifelong dream of getting slimed. But upon leaving the club, you have one more room to walk through before getting to the main event: the Slime Bubble-Torium, essentially a room where you can throw inflatable green beach balls at each other while taking pictures with seven-foot cans of bubbles.

From there, it’s onto Slime Central, and your time to slime. If you didn’t bring a change of clothes, not to worry: The standard sliming included with your $35 admission ticket brings a poncho, which you’re instructed to put on by the enthusiastic, mic’d-up sliming professionals. 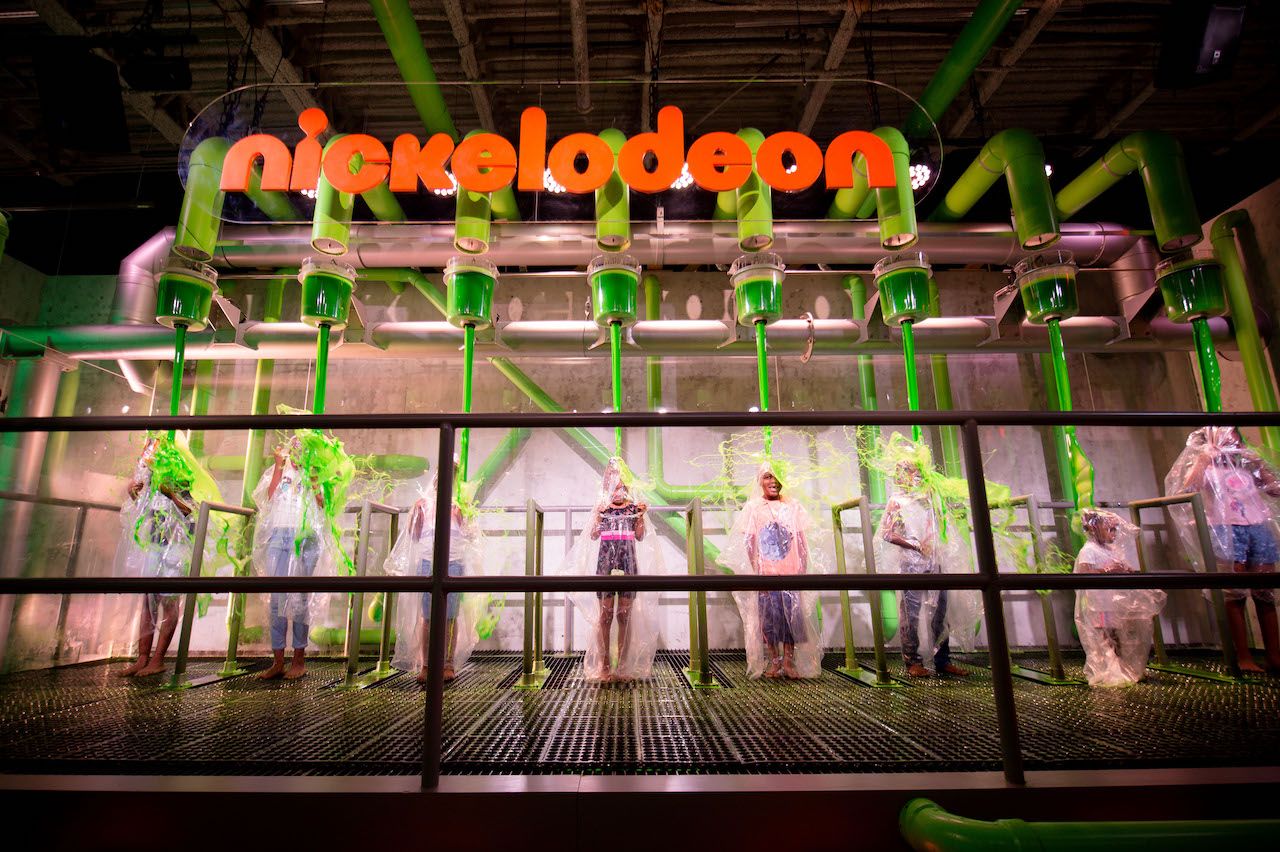 After rolling up your pants and taking off your shoes, you’re escorted onto a platform with a handful of other aspiring slimees, where each person stands under an ominous green showerhead. The slime hype man counts down from five… four… three… two… one… and suddenly you are blinded by a warm blanket of green. You can feel a little on your feet, but for the most part, the sliming seems a little anticlimactic, an annoying layer of plastic between you and the promised land.

That, and when you post a picture of yourself getting slimed with a poncho on, most of your friends will comment with something along the lines of, “With a PONCHO??? C’mon man!”

If you want the real deal, skin-to-slime contact, you’ve gotta shell out another $30 to go into one of the private VIP booths. Inside, you’ll stand with nothing between you and the slime, in a glass booth where all of Slime Central can watch as you’re doused in the green stuff. Your family, friends, or frenemies also have the honor of pulling the lever that gets you slimed. And once you’ve got thoroughly covered, Slime City even gives you a souvenir T-shirt. Mostly so you don’t mess up your car on the way home.

After going up another escalator, you’ll pass by the Slime Lab, where for another $12 you can make a couple of souvenir jars of green slime, adding in sparkles, googly eyes, or pretty much anything else you’d put on a Halloween cookie.

But even with this experience, the recipe for slime is kept secret.

Cohen says the average guest stays for about an hour at Slime City, though if you’re not trying to document the whole thing for your legions of followers — and don’t have kids — you can probably make it through in about 20 minutes. And while Slime City is in Miami through January 20, she says they have plans to bring it to other cities.

So if you find yourself in South Florida over the next couple of months and want to feel what it was like to unwittingly utter “I don’t know” circa 1985, Slime City gives you your chance. You may not relive your childhood, but at least you can experience slime in much the same way you’d always dreamed. And don’t even need to down a Barthy Burger to do it.

NewsA Magical Immersive Dr. Seuss Exhibit Is Coming To the US
Tagged
Entertainment Events Miami, FL, United States
What did you think of this story?
Meh
Good
Awesome