When thinking of divided cities, Berlin is the best known. But the fall of the Berlin Wall in November 1989 did not signal the end of the world’s divided capitals. Nicosia, on the Mediterranean island of Cyprus, remains a divided capital city to this day. The wall, known in the city as the “Green Line,” runs 120 miles across the island, effectively splitting it in two.

The island’s capital is a highly unique tourist destination for history buffs, adventure seekers, and those in pursuit of complicated pasts and undetermined futures. Despite uncertainties over what the future will hold, now is the best time to pay a visit to Nicosia, a capital that, once you venture away from the barrier, offers entertainment districts, cafes, and cuisine — found on both sides of the border — that make it an engaging stop on a trip to the Mediterranean. Visit both sides of the line to fully get a feel for the history, with the following being your guide points.

About Cyprus and the division of the island 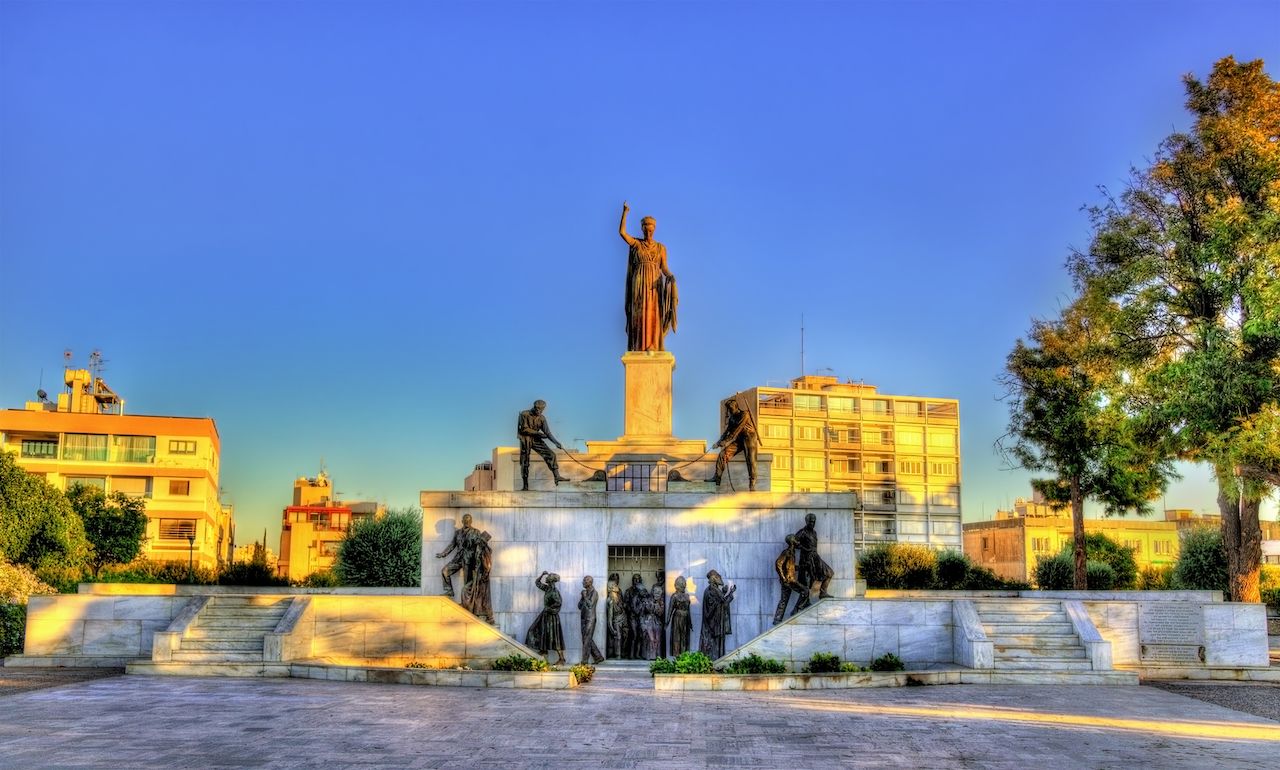 Cyprus is an ex-British colony whose warm Mediterreanean climate and pristine beaches offer the most sunny days in Europe, attracting sun bums and hedonists since the 1950s. The island was conquered by the Ottomans in the 1500s and taken over by the British in 1878. In 1974, the Turkish army arrived in Cyprus with the intention of “liberating” the northern part of the island from the Greek-controled southern section. This military presence and conflict split the island into two halves down the middle: the Muslim Turkish northern and Christian Orthodox Greek southern sections.

In the wake of the conflict, a 112-mile ceasefire line dividing the city and the two dominant populations was built. While the south is internationally recognized and a member of the European Union, the self-declared Turkish Republic of Northern Cyprus is recognized only by Turkey. However, both sides of the country consider the same city their capital. The southern part of the city is called Nicosia while the northern part of the city is called Lefkosa.

A massive border traces the midpoint of the city, defined mostly by ramshackle white-and-blue barricades guarded on both sides by patrolmen. Roads near the barrier that once connected neighborhoods and families have been boarded up, now impassable. Bullet holes remain as ugly blemishes on buildings and leave many areas of the city with an ominous feel, made noticeably weirder by the “roads to nowhere.” Police checkpoints are not uncommon, and neither is a step over sandbags as you get close to the barricade itself.

For 45 years, this city has stayed frozen in a diplomatic crisis with many pushed from their homes across the border, unable to return. Historically, the situation has escalated in conflict, and the border between the two countries has even been closed. However, based on the actions of progressive modern leaders, the border has been reopened, and for visitors, it has never been easier or safer to cross the border. The city is largely safe and there are many interesting things worth doing in this divided city.

Check out the UN Buffer Zone and walk the green line. 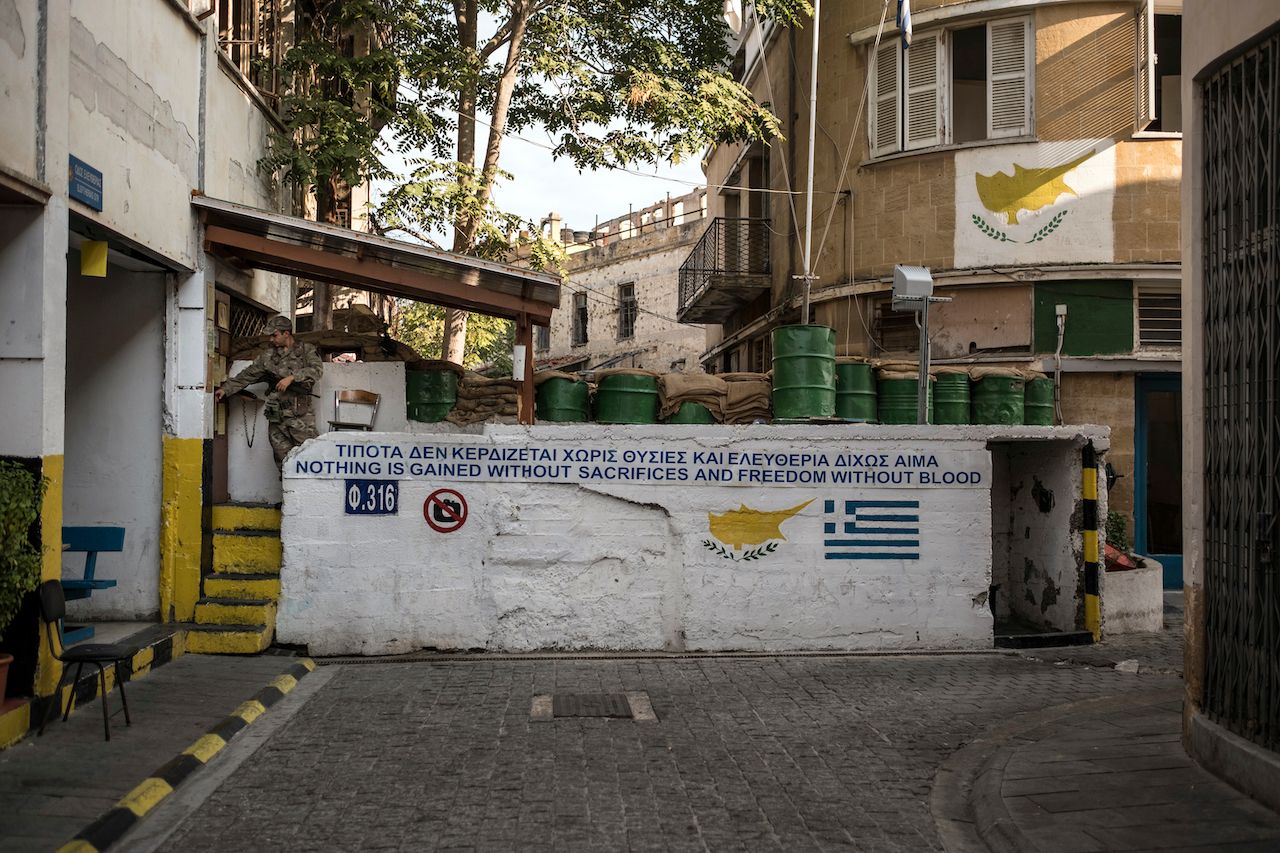 The phrase UN Buffer Zone suggests imagery of bloody war zones in places typically far away from a sunny isle in the Mediterranean Sea, but that’s how much of the immediate area surrounding the wall is classified. Many are absolutely shocked to learn there is even a UN Buffer Zone in the European Union. You can’t actually go into the buffer zone as it is heavily militarized and guarded by armed soldiers, but you can get close enough — along with the other curious tourists on the island doing the same — to take a darn close peek. It is a remarkable and humbling feeling to see the massive guard towers built to keep the peace here, perhaps the safest lesson you can personally find in the tangible and lasting effects of war on people and communities. There are locally made tourist maps available in the area that you can use to trace the wall and see points of interest both related to the war and signifying other historical moments and buildings along the way.

As you make your way along the route, admire the incredible, politically charged street art etched nearly everywhere, from street corners to buildings. While you’re here, have a meal at the Home for Cooperation, a cafe/community center that is actually located within the buffer zone. The center “aims to act as a bridge-builder between separated communities, memories and visions.”

Cross over the border on foot at Ledra Street. 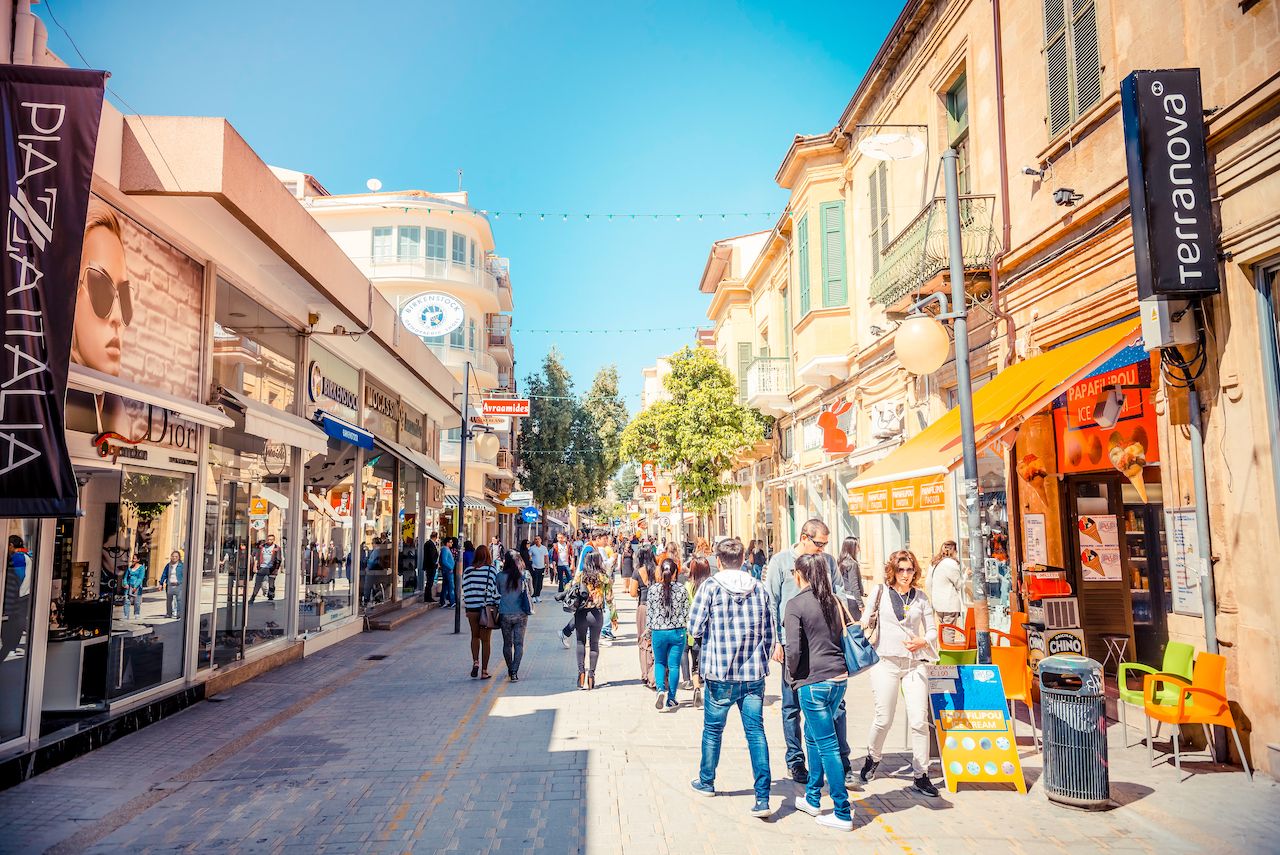 How many borders have you ever crossed by foot? How about borders you’ve crossed by foot on an island? Though rather bureaucratic, walking over the border from Nicosia to Lefkosa is one of the most unique experiences on the island, if not in all of the Mediterranean. In 2008, the barricade on Ledra Street, the major shopping boulevard in Nicosia, was officially removed, formally allowing passage into the other side. This is exactly how I crossed the border. I ambled down the shopping streets and arrived at a checkpoint. As an American citizen, expect to show your passport to officials on both sides to be granted entry. There are no visa requirements or entry/exit stamps but merely a process of formalities. This will be the case for most nationalities that arrive. A Turkish visa is not required to get to the north.

Immediately as you walk across the border you’ll see the stark differences — in language and currency first but also in culture, religion, food, clothes, and conservatism. The entire facade of the city’s patchwork is different. Remarkably, while you can walk across it without breaking a sweat as a visitor, this border did not open between local people until 2003. It’s difficult for most to imagine a world in which people are denied access to their homes for over 30-plus years, but this is a harsh reality for Cypriots. 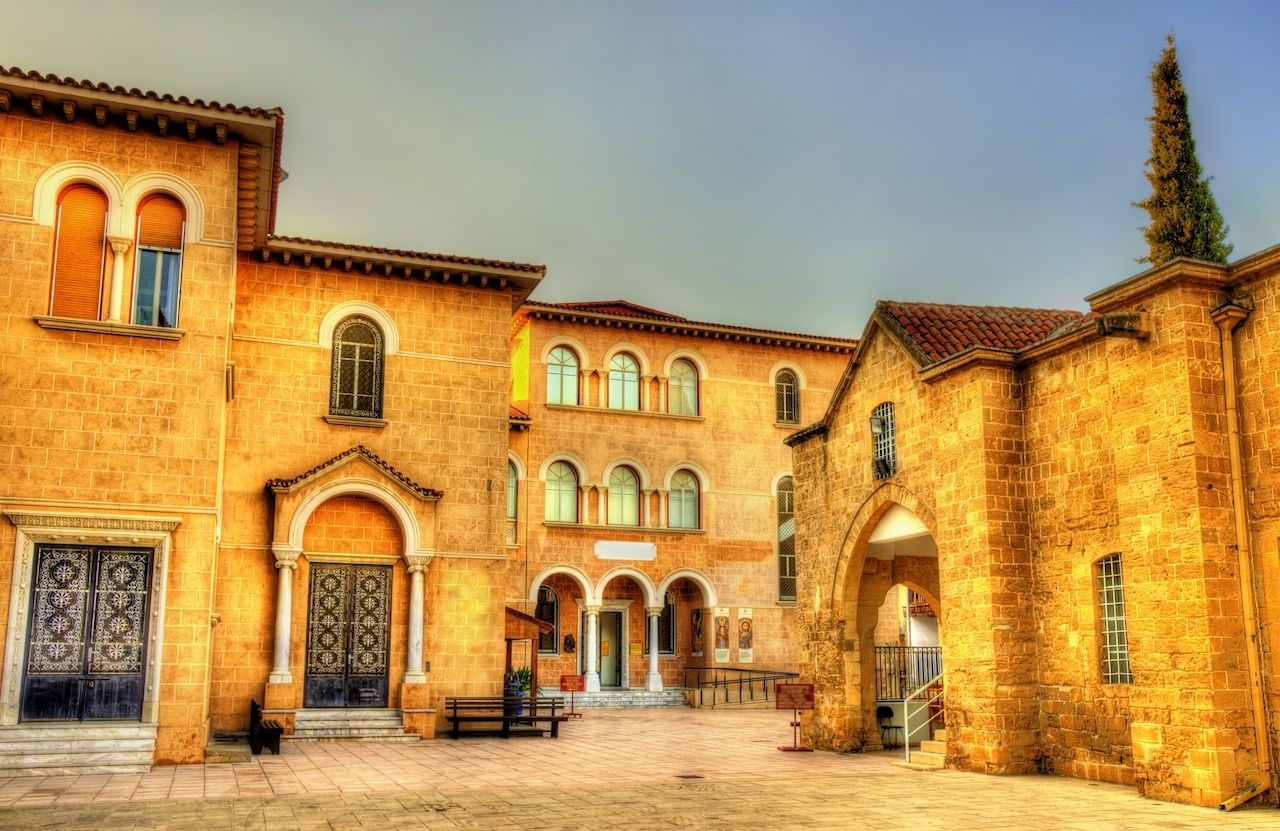 This well-sourced and planned museum traces artifacts and cultural advancements of the island dating from the Neolithic period to the Byzantine era. Though not based on ruins like many of the sites in Southern Cyprus, this museum is the largest and best-regarded archaeological museum in the country. Amble through the massive collection and ponder the plethora of history, both social and otherwise, that has taken place on this soil. It will certainly help contextualize the modern-day conflict to understand the varied histories and traditions that thrived on this fertile island. The Byznantine Museum and Archbishop Palace, on the Lefkosia side, houses a massive collection of Byzantine art and historical artifacts.

Similarly, the extensive exhibitions at the Leventis Museum are well thought-out and take you on a journey through the history of Nicosia and Cyprus. Galleries focus on various regional empires, their artifacts, and the time periods in which they relate to Cyprus, including Ottoman, British, Frankish, and Venetian. The museum also hosts impermanent exhibits and art displays. There is no entry fee. 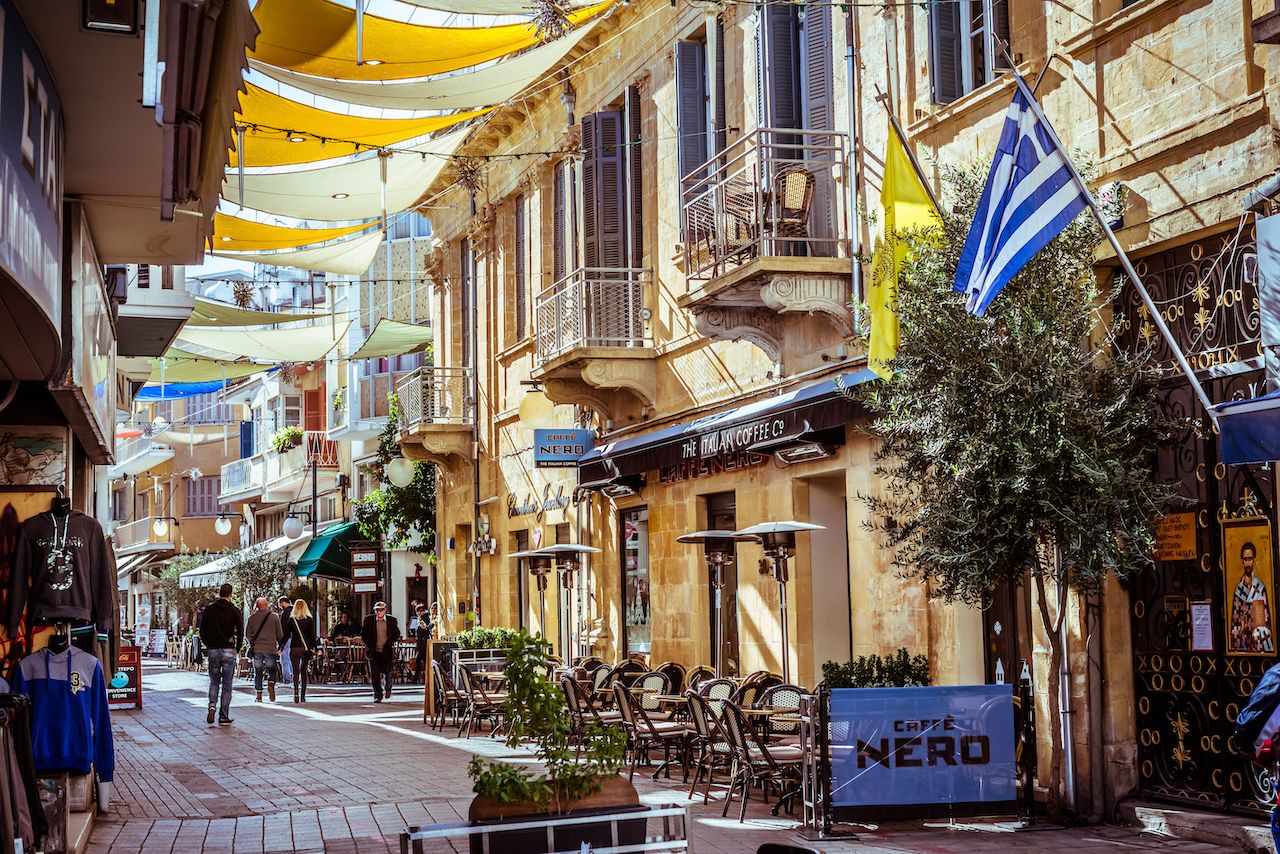 Cafe culture is an integral part of Cypriot life and a popular attraction for visitors — not least to ponder the heavy topics that your tour of the border raised. Enjoy ambling down the winding alleys and passing your day in ivy-covered establishments. To find the real treats, duck down a secluded alley shrouded with flowers — they are ample — until you’re met with wafts of rich aromas of bitter beans pumping the veins of citizens on both sides of the wall. From local Apomero to artsy Luna Cafe Art Shop, there is a unique ambience to be discovered for every caffeine seeker. Turkish coffee and Cypriot coffee are unique based on the fine beans used in brewing, so be sure to embrace the culture and stop at more than one place.

Summer is the best season for cafe going, as the buzzing spills onto tables on the sidewalks streets. Enjoy your iced frappe and get lost in a book, or better, respectfully engage in conversation about the state of the conflict with fellow cafe-goers. Many older citizens and their families were displaced in the conflict and are eager to share their experiences and trials with war. More often than not, you will be met with a hopeful attitude that change is on the horizon, and a positive outlook that is one of the greatest things about visiting this city. 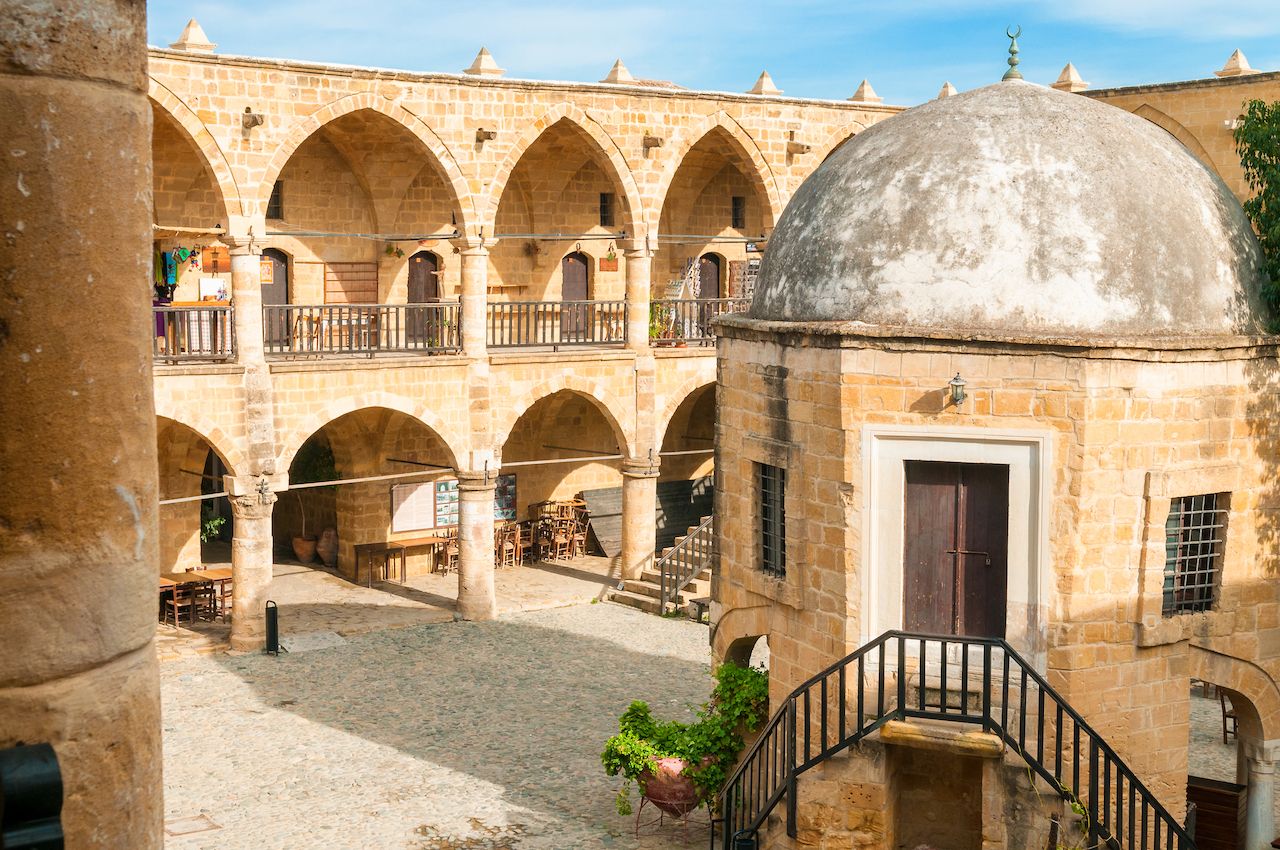 This city held historical significance long before its complicated modern history. Büyük Han, built in the late 16th century, was a rest stop for merchants and their caravans traversing the country. This structure was able to provide lodging, a grazing place for horses and camels, and facilities to take a largely needed bath. It has been restored to its former glory and is easy to access from any part of the old city.

One of the more unique aspects of the culture here are the numerous religious sites that have been tailored to suit the pious demands of the population. On the northern side, massive churches were converted to mosques to cater towards the new majority Turk population. To walk into a massive mosque with the call to prayer illuminated in technicolor from intricate Christian stained glass is a fascinating sight.
The Selimiye Mosque is the most recognizable of said monuments, built as the Church of Agia Sofia and finished in 1326 after nearly a century of construction. When the Ottomans conquered the island in the 16th century, it was converted into a mosque. Make sure to dress modestly and cover your head if you’re a woman if you wish to enter. 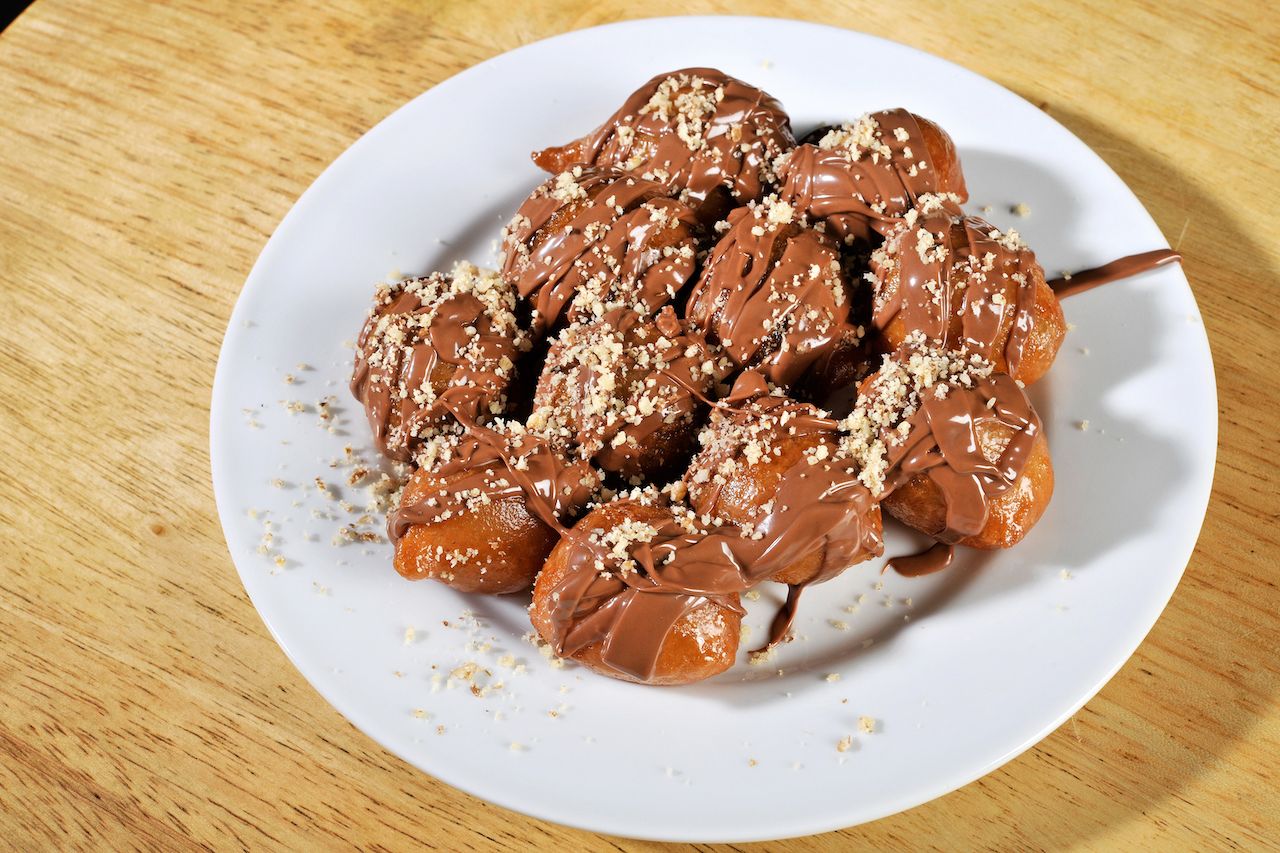 Both Turkish and Greek food are regarded internationally as scrumptious, and in this divided city, you can have the best of both worlds. Enjoy fresh vegetables and revel in the cuisines born from the fertile soil of this mixed island. Follow your nose — and the locals — into a crumbling tavern and get what they get, likely a particularly tasty artery clogger called Loukoumades. This dish is deep-fried dough balls coated in honey, a traditional pastry in Cyprus. You will also see the much-coveted halloumi cheese at cafes across the city, a delicious delicacy that is gripping the hipster world, and here you’re getting it from the source.

Unfortunately, the capital airport on the European side has been closed since the Turkish intervention in 1974. Thus, if you wish to fly into the south, Larnaca Airport (LCA) is a 30 minute drive and has frequent flights to many other European cities. From here, it is easy to take a cab, shuttle, or bus to the city. However, you can still fly into the capital on the Turkish side into the Lefkosa airport (ECN). On either side, you will find incredible places to stay and unmatched hospitality.

Archaeology8 Archaeological Sites and Museums You Can’t Miss in Athens Beyond the Acropolis
Tagged
Culture Insider Guides
What did you think of this story?
Meh
Good
Awesome