There comes a time in the lifespan of a city when the old buildings that residents once knew begin to transform into something else entirely. Sometimes the historic and the modern meet, as Melissa Katrincic found on one of the first opening nights at her Durham, North Carolina, cocktail spot Corpse Reviver Bar & Lounge. A man stopped by and told her how he used to work in that very same building, back when it was used for a very different purpose: building coffins.

Katrincic and her husband Lee opened Corpse Reviver in October of 2020 after years of planning and more than a couple pandemic-related delays. The space, as well as the upstairs area that’s currently used as the distillery’s office, was a coffin manufacturer in the 1960s, Melissa tells me over the phone.

That’s in part how the cocktail bar got its name (“We can’t take ourselves too seriously,” she says). It’s also a nod to the classic Corpse Reviver No. 2 cocktail made with absinthe, gin, vermouth, orange liqueur, and lemon juice. The bar’s logo reflects both inspirations: It’s a cocktail shaker, but one in the shape of a coffin.

Corpse Reviver is an extension of Durham Distillery, which has made innovative, award-winning gins since 2013. 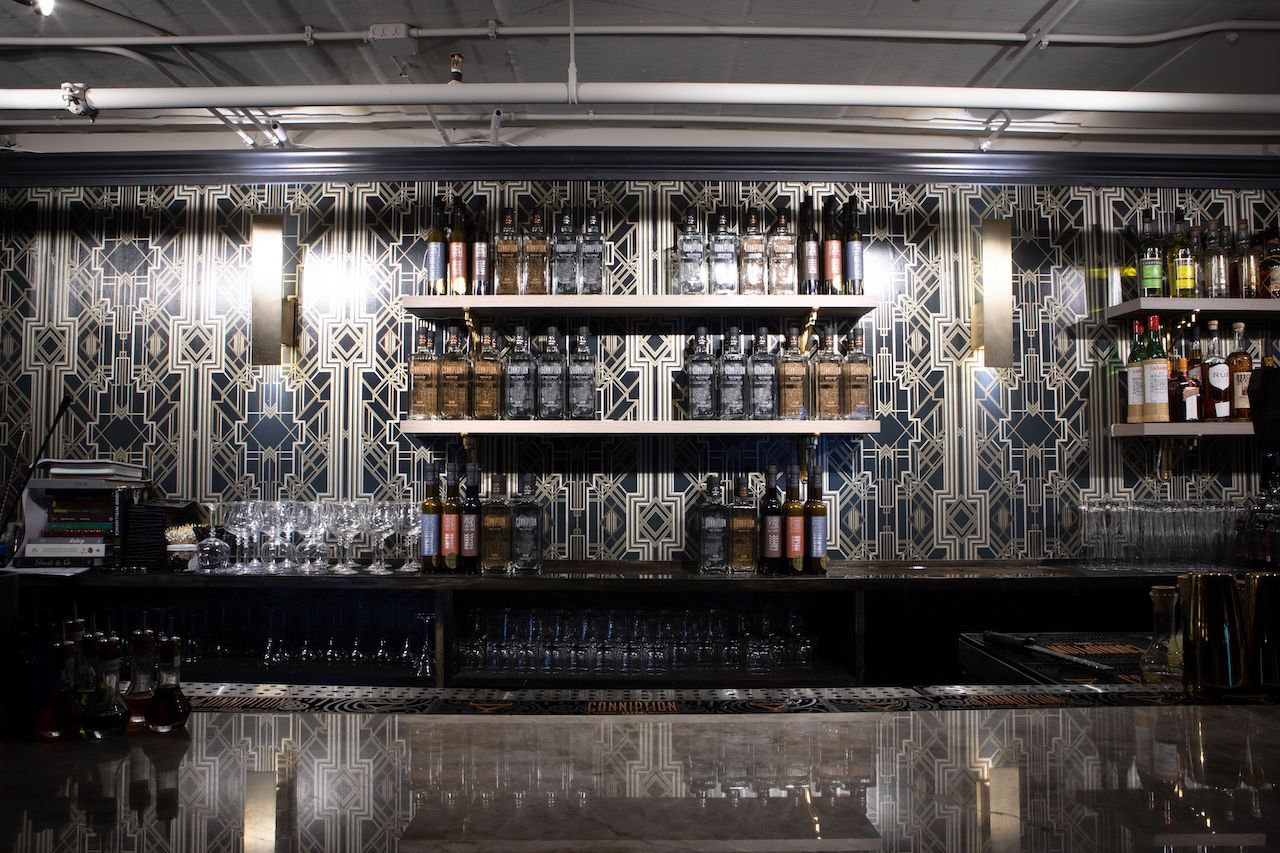 The location is just as, if not more, ideal for a cocktail bar as it is a distillery. The building’s basement faces trestle train tracks that were once central to moving tobacco from Durham’s warehouses to the rest of the state. Just out front is the Durham Bulls baseball stadium featured in the 1988 baseball movie Bull Durham. Durham Distillery’s logo — a martini glass with bull horns — pays homage to the location, and you can hear the ding of batting practice on sunny days as you sip your drinks. All of this, mixed with the building’s coffin-making history, makes for a place with one foot in the past and one foot in the present.

“North Carolina is an interesting hybrid state” when it comes to spirits, Katrincic says. “It’s got the history of moonshining and bootlegging, and now it has a lot of really good new spirits on the horizon.”

The Katrincics moved to Durham from Philadelphia in 2006. Lee had worked for 20 years as a pharmaceutical chemist, and Melissa earned a degree in physics before working with ad agencies in the Northeast, including a stint with Burt’s Bees. Gin was long her spirit of choice. When the Katrincics started thinking about building a brand of their own, they set out to try as many gins as they could and eventually tasted between 150 and 200 gins to train their palates and come up with a unique expression.

“In Durham,” Melissa says, “you’ve got to ultimately be focused on quality in order to be embraced by the community. They will see through any sort of gimmick.”

For their own gin, they took a hybrid route that blends innovation and traditional distillation techniques. Durham Distillery uses a custom German-designed pot still for its flagship Conniption gins as well as a rotary evaporator that allows for vacuum cold distillation — the first distillery in the US to do so. The rotary evaporator (or rotovap) can gently extract flavors from delicate flowers and cucumbers without running roughshod over the ingredients like hotter-burning conventional distillation does.

The result is a core duo of gins with a loyal following. There’s the Conniption American Dry that’s a contemporary style perfect for people who think they don’t like gin. It’s made with familiar ingredients like juniper, coriander, angelica root, and cardamom and then seasoned with a hint of cucumber, citrus, and honeysuckle flowers distilled in the rotovap. Then there’s the Navy Strength, which sits at 57 percent ABV and is flavored with six times the amount of juniper along with cassia, coriander, caraway, rosemary, cardamom, and citrus and fig from the rotovap. It’s a gin for gin drinkers, Katrincic says, and Lee describes it as a gin that they were able “to cram as much flavor and complexity as possible” into.

Their work has earned them plenty of distinction’s at home and abroad. That includes induction into The Gin Guild — which was started in London in 1638 by Royal Charter — in 2018.

A bar that showcases the cocktails that Durham Distillery’s gins are designed for seemed like a natural addition to the business. On July 29, 2019, that became easier with the passage of North Carolina Senate Bill 290. The bill allows distilleries to sell cocktails on site for the first time in more than a century. One of the first leading the charge was the state’s very own coffin-shop-turned-cocktail-bar. 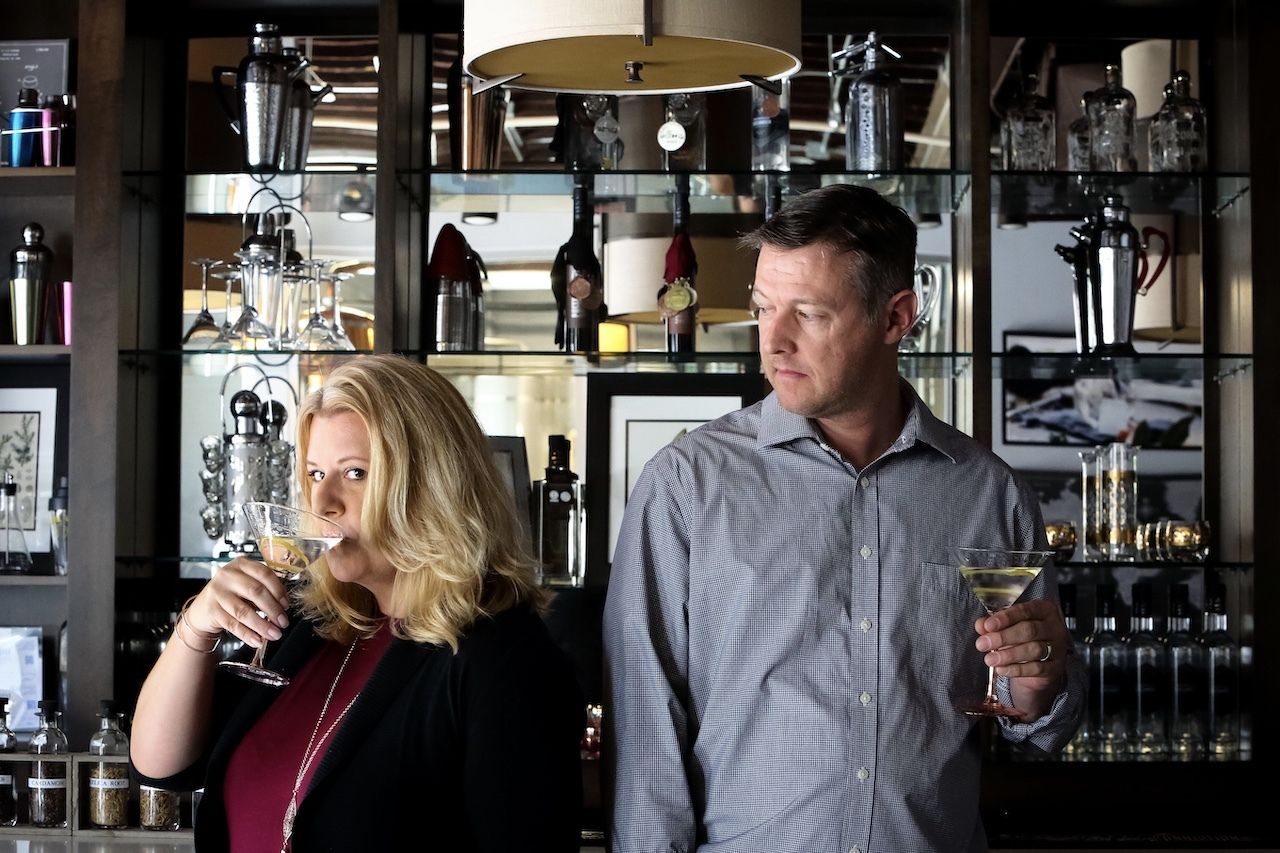 Corpse Reviver was in the works for a year before the bill passed. They planned to work around the laws in place at the time by registering the cocktail bar business under Lee’s name and keep the distillery under Melissa’s name. It wasn’t an ideal setup. They’d have to purchase their own liquor (along with all of the taxes that come along with doing so) from the distillery to sell it at the bar, for one.

Needless to say, the changed law made life easier for Durham Distillery and the rest of the 80-plus distilleries in North Carolina. Katrincic eventually predicts that other craft distilleries will have similar success, now that customers have more access to different ways to experience the spirits at distillery-owned bars. 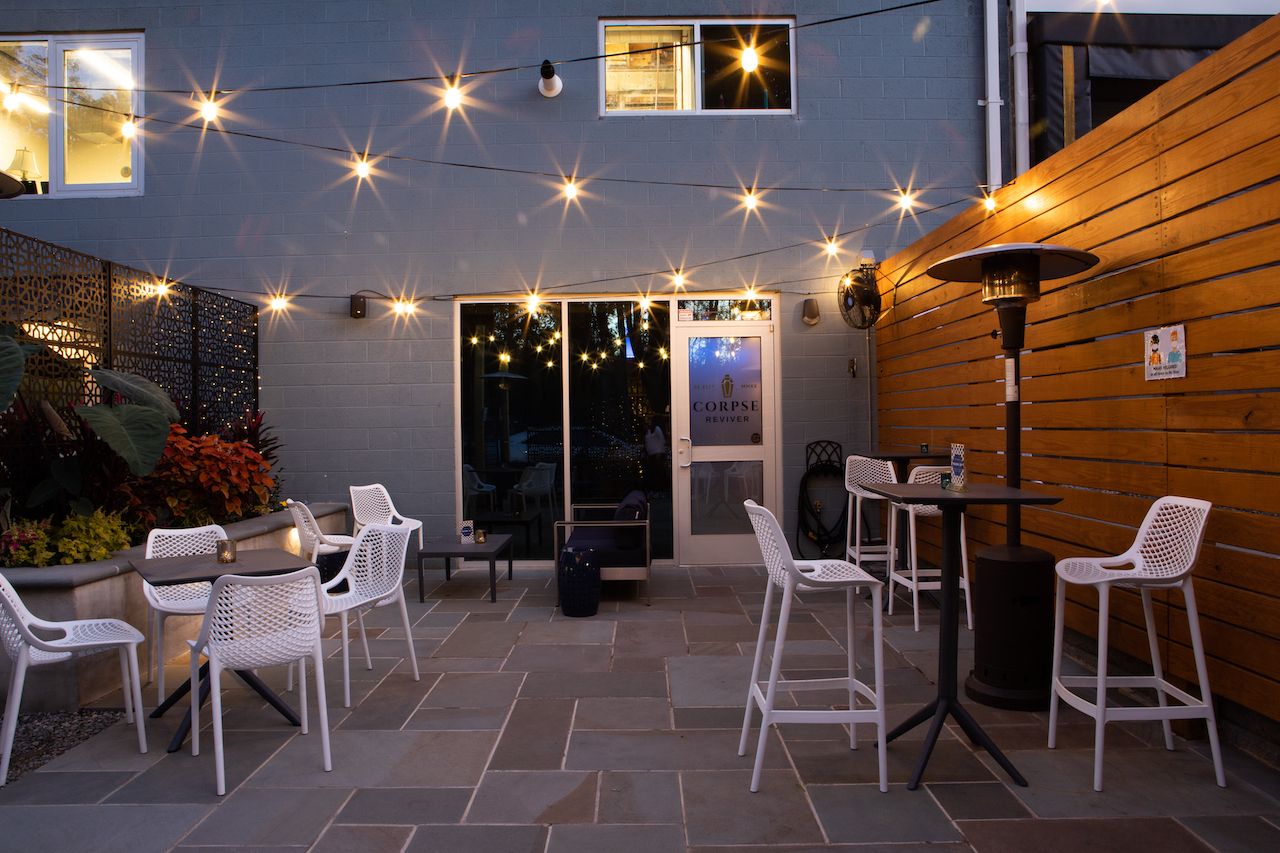 COVID-19 slowed things down for many distilleries that planned to open their own bar the year after they were first allowed to. Corpse Reviver had a planned, and then passed, opening target of April 2020. There was a short window of time in the summer when Katrincic thought they could open, but case numbers were too high. They finally opened the bar’s doors in October with a long list of safety procedures in place, only to shut down again when cases surged in December. As of February 4, the patio side of the bar is open, and Katrincic plans to follow guidelines set by the city and state to determine when the full bar will open. When it does, a roving martini trolley will be ready to offer tableside cocktails to guests.

The true highlight of Corpse Reviver hinges on the fact that Durham Distillery and the bar have one eye toward history and another looking at what’s to come. That includes the possibility of more cocktail-friendly gin styles that’ll be served in Corpse Reviver, like Old Tom gin.

They’re also working on a special barrel-aged series that started in 2020 with planned annual releases in the fall. The first, which is aged in barrels that used to hold bourbon from High West Distillery in Utah, was a hit. Katrincic expects it’ll be completely sold out by May, though she plans to hold some of the bottles for Corpse Reviver. It goes too well in a Martinez cocktail to not keep some for the bar, she says, and the next barrel-aged release is months away.

It’s just one more reason to put this former Durham coffin shop, current gin-filled cocktail bar, on the list of places to visit as soon as travel is safe again.

WATCH: This Mountain Forms a Shadow in the Perfect Shape of a Bear Every Afternoon

Six Ways To Feast in Wilmington and Beaches: A Guide To Wilmington Restaurants, Bars, and Festivals

North Carolina Trails: Welcoming Everyone Into the Outdoors