Champagne has to be made in Champagne, France; Parmigiano-Reggiano must come from four distinct regions in Italy; and bourbon must be made in the United States. London dry gin, however, keeps the name of the place that made it famous without any geographical restrictions.

If you know only one style of gin, there’s a good chance that it’s London dry. Many of the most famous brands lay claim to the style designation — Tanqueray, Bombay Sapphire, and Gordon’s, to name a few — though it’s rare for the big names in London dry gin to actually be made in London (Beefeater is a notable exception).

The name can be confusing for people just learning about gin. Imagine, for example, that nearly all of the famous Florida oranges were actually grown pretty much everywhere but Florida. Yet the name is important nonetheless, and there’s a long history behind why this particular type of gin refers specifically to London — a city with deep connections to gin production.

What is London dry gin?

If not the name, then what makes these spirits a London dry gin?

The name London dry gin refers to production methods rather than location. The European Union defined the style in 2008 as “a type of distilled gin” that’s “obtained exclusively from ethyl alcohol of agricultural origin.” The flavor must come exclusively from redistillation (more on that later), and it can’t have more than 0.1 grams of added sugar per liter or any coloring in the final product. It also must be at least 37.5 percent ABV.

The primary flavor, as with all gins, is juniper. London dry gins are also commonly high in citrus notes from lemon and orange peel.

In the mid-2010s, there was a push to create a standard by which any gin with the name London dry gin had to be made in London, according to The Spirits Business, but that was scuttled due to the massive effort it would take to make and enforce the switch.

Why is it called London dry gin? 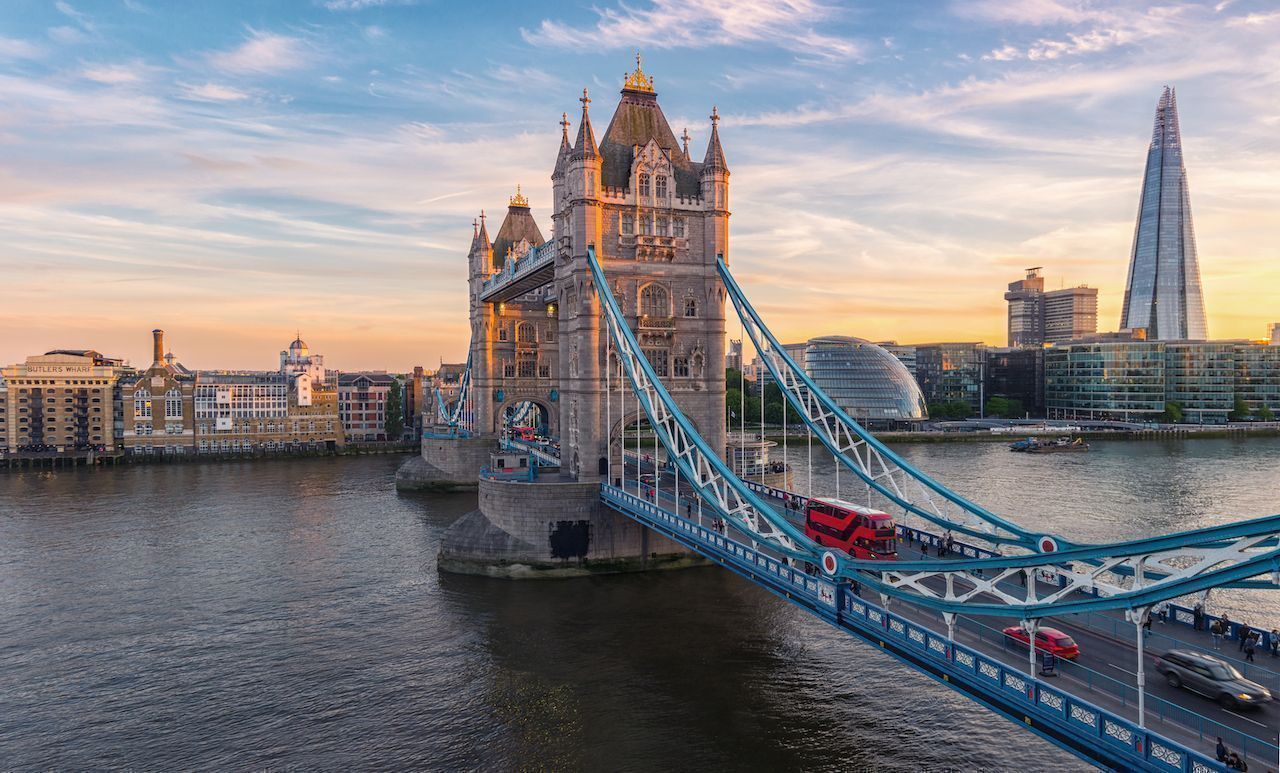 To understand how gin became London dry gin, you have to start in the early 1600s when distilling was still a nascent practice. Women — like housewives and housekeepers — of the era typically performed distilling and brewing. The 1602 book Delights for ladies to adorn their persons, tables, closets, and distillatories, with beauties, banquets, perfumes, and waters (or, more simply, Delights for ladies) by Sir Hugh Plat included what’s believed to be England’s first juniper-based drink that also included nutmeg, clove, and mace. It was called “spirit of spices.”

British soldiers fell for a juniper spirit while serving abroad, before the country went all-in on domestic production. During the Thirty Years’ War from 1618 to 1648, they drank Holland’s “Dutch courage,” which was genever (sometimes spelled jenever). The spirit is made in pot stills using malted grains similar to whiskey, and it’s flavored with juniper and other botanicals. Genever is both the precursor to modern gin and where gin got its name.

The spirit had medicinal properties, too. Englishman Samuel Pepys wrote in 1663 that he used a juniper-based “strong water” (liquor) “to make myself break wind and go freely to stool before I can be well, neither of which I can do yet.”

Gin really took off, however, when the Dutch William of Orange became king of England in 1688. He banned all trade with France, which meant no French brandy or wine on English soil. Home-grown spirits based on grain were encouraged instead. As Anthony Lane documents in the New Yorker, the encouragement worked, and England flooded with cheap, homemade liquor. The average person in England drank about a third of a gallon of spirits in 1700 and just over two gallons by 1743.

This led to a period known as the Gin Craze. According to a history recorded by the gin brand Sipsmith, one in four residences were producing gin in parts of London. It was not a quality tipple, to say the least. Alcoholism was rampant, and producers used shortcuts like turpentine to mimic the Christmas-tree flavor of juniper. Laws called the Gin Acts tried to curb overconsumption of the cheap spirit, but it took decades to make a difference. For a visual representation of the madness, consider William Hogarth’s diptych Beer Street and Gin Lane.

London regained some of its sobriety by the 1800s, but gin — particularly a barrel-aged style of gin called Old Tom — remained popular. Then the invention of the Coffey still in 1830 by the Irishman Aeneas Coffey changed distillation forever. His column still could make a much higher alcohol spirit faster than pot stills. Column stills also had fewer impurities and a more neutral taste — think vodka versus moonshine.

Distillers, many of which were based in London, no longer needed to add sugar to cover up impurities. This drier style gin eclipsed the popularity of what came before and adopted the name of the city where much of it was made.

What’s the difference between London dry gin and other types of gin? 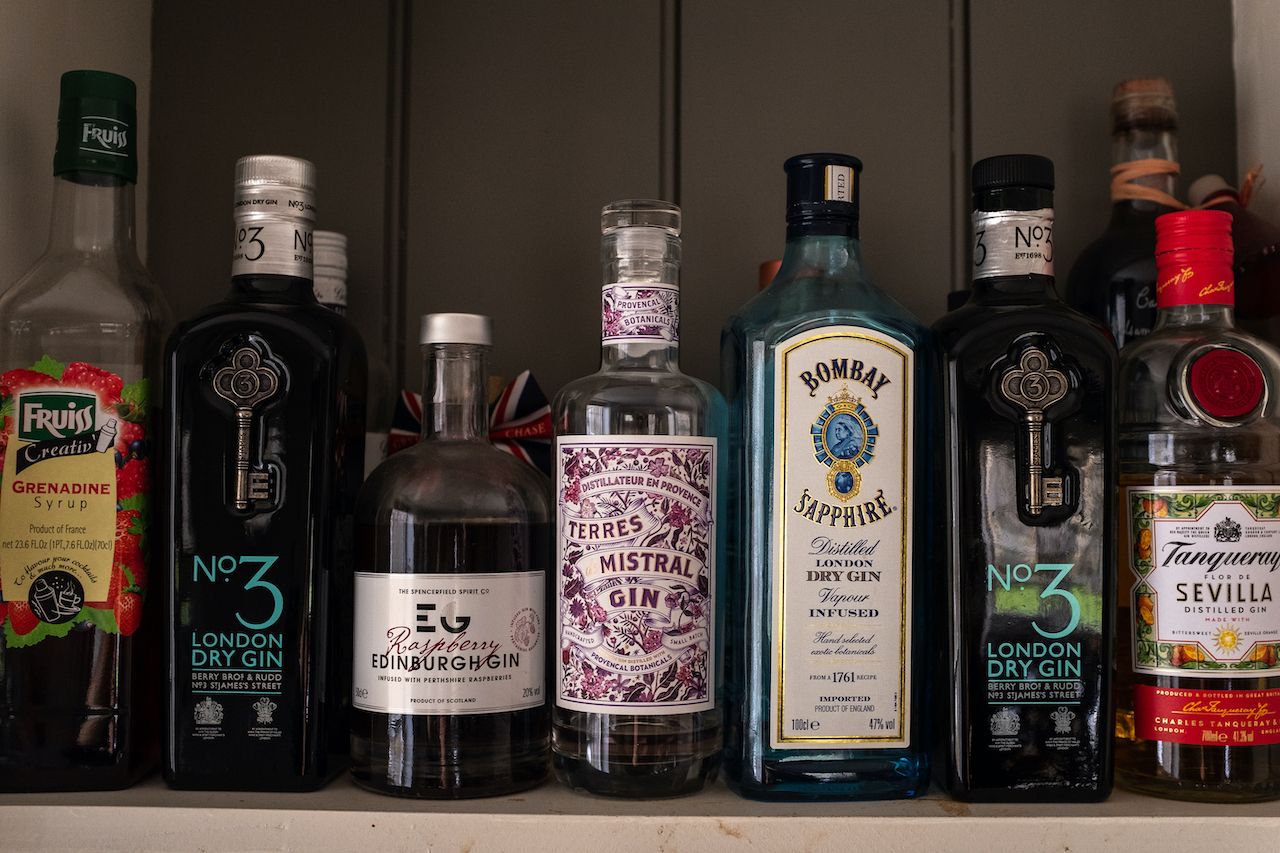 All gin is made from the same basic ingredients: a neutral-tasting spirit and botanicals. Juniper is required to be the “main characteristic flavor,” according to the TTB, but any number of other herbs and spices can be thrown in as well.

Gin can be made three ways. The easiest to make is called compound gin, which simply mixes a neutral spirit with the botanicals and then strains out the liquor once it’s picked up some of the flavor. Redistilled gin is made by taking a neutral spirit and then distilling it again with botanicals. Finally, there’s distilled gin, which is made by adding botanicals to the original mash and then distilling it all together from the start. London dry gin adheres to the final category. Today, any gin can be called London dry as long as it’s a distilled gin with less than 0.1 grams per liter of added sugar, no matter where it’s produced.

Any gin that macerates botanicals or adds flavor in any way after the spirit has been distilled isn’t a London dry. Hendrick’s, for example, adds cucumber and rose after distillation. The sugar content is another factor that differentiates London dry, though not all dry gins are London dry because they add botanicals after the first distillation.

How to drink London dry gin 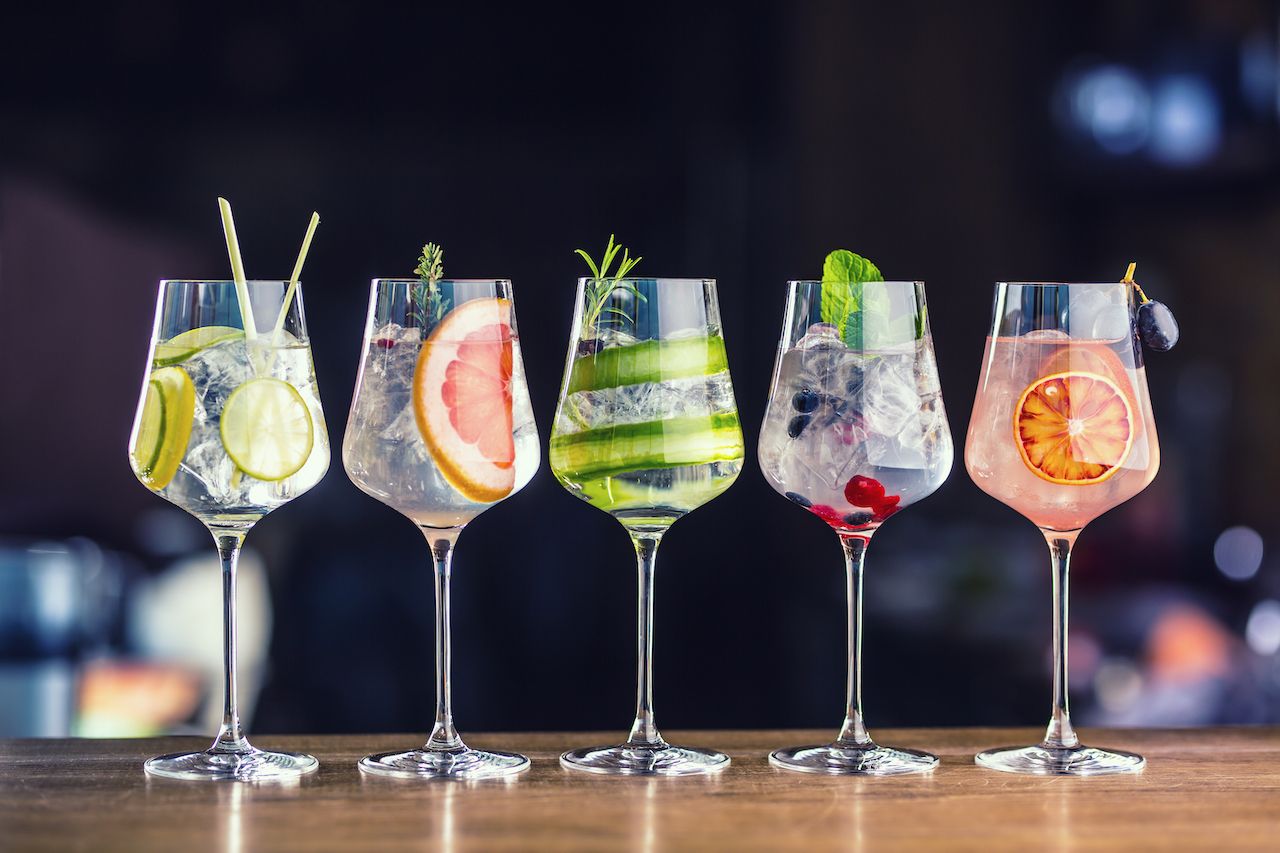 London dry was one of the most popular and widely available gin styles throughout the late 1800s and into the mid-1900s. This is also when cocktails became in vogue, so many of the most famous gin cocktails and drinks are based around the clean flavor profile of London dry.

This includes the most famous gin drink, the martini (as well as its spin-offs, the dry martini and dirty martini), which is made with gin and dry vermouth. London dry gin is also the style classically used in gin and tonics. Gimlets, made with gin and sweetened lime juice, get a nice juniper bump in flavor from London dry, as do negronis.

The best London dry gin brands to try from London 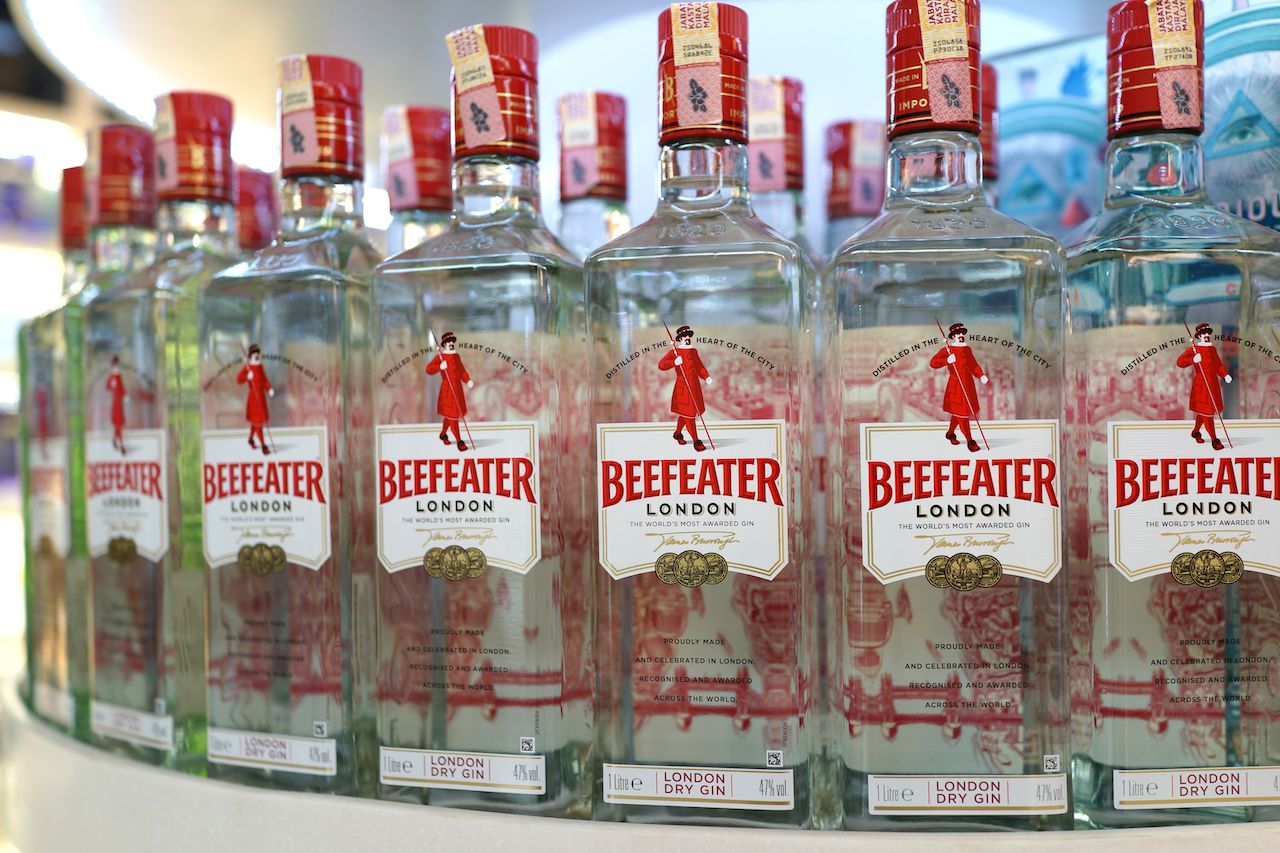 Gin distilling fell out of fashion in London in the latter half of the 20th century, but it has once again become popular. When it opened in 2009, Sipsmith was the first copper distillery to operate in London in nearly 200 years. There were only 12 gin distillers in all of the UK at the time. Today, there are more than 540 in the UK and 24 just in London.

Sipsmith: The company helped change an excise act from 1823 that effectively prohibited small distilleries, and with the change, it ushered in a new era of London gin distilling. Its London dry gin was the first spirit it made and remains a tried-and-true expression perfect for cocktails.

Beefeater: Started by James Burrough at a distillery in 1863 in the Chelsea neighborhood of London, Beefeater is still one of the most popular London dry gins available. It’s also one of the most classic. Today, it’s made in the Kennington neighborhood using nine botanicals, including juniper, Seville orange, and lemon peel.

Hayman’s: This distillery is run by Christopher Hayman and his children James and Miranda. They trace their family history back to James Burrough of Beefeater fame — Christopher is Burrough’s great-great-grandson. The Burrough family sold Beefeater in 1987, but the lineage continues today with Hayman’s. Hayman’s London dry is made with juniper, orange and lemon peel, cinnamon, nutmeg, angelica, and licorice root.

The best London dry gin brands to try from the UK 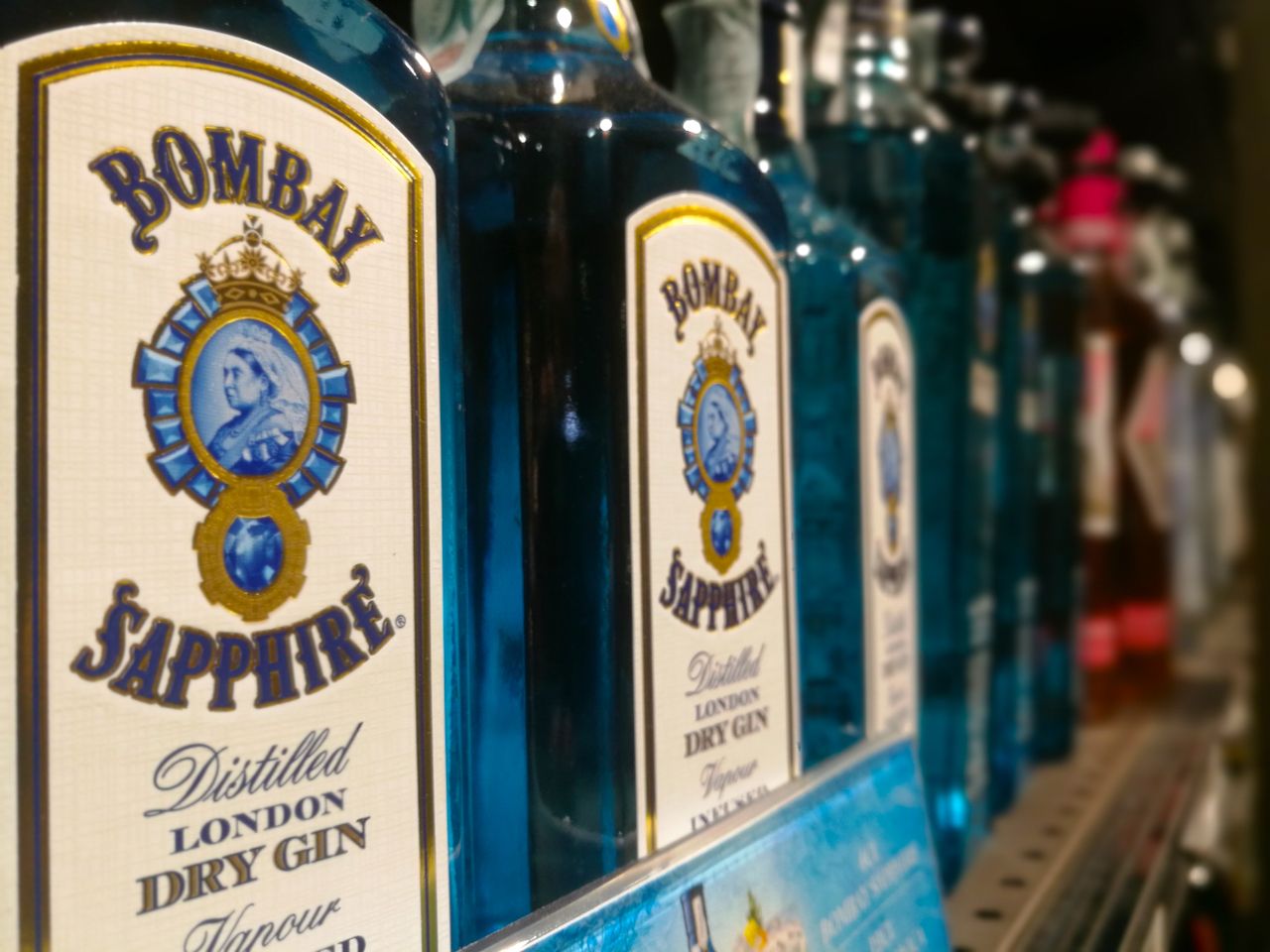 Salcombe: Start Point, Salcombe’s London dry, is made in the town of Devon and is named after the Start Point lighthouse. The citrusy gin was first released in 2016, and it’s inspired by the fruits and spices brought in by the Salcombe Fruit Schooners, which made voyages to the Mediterranean and back to England in the 19th century.

Tanqueray: Charles Tanqueray started his eponymous distiller in the 1830s. He was one of the first to make a London dry style of gin, and today Tanqueray is one of the most widely selling gins — London dry or otherwise — in the world.

Bombay Sapphire: Easily recognizable from its blue bottle, Bombay Sapphire opened in 1987 in Hampshire County in southern England. Despite the brand’s relatively recent founding date, it has its roots in the 1830s when the Dakin family purchased a copper still and created a gin recipe using vapor infusion rather than a straight boil.

Gordon’s: One of the most historic gin brands as well as a classic example of London dry gin. Alexander Gordon started his distillery in 1769 in Southwark, London. Today, it’s owned by the spirits conglomerate Diageo and is no longer distilled in the city.