If North India is known for one thing, it’s the incredibly varied landscapes — from humid, lush plains to dry, sandy deserts to the heights of the snow-capped Himalayas. For this reason, it’s emerged as a hub for India’s adventure travel with activities such as trekking, climbing, rafting, and biking — sometimes all in the same location.

Most of the popular areas for these activities are in the numerous valleys that make up the region’s ever-changing landscape. Whether you’re into hardcore, multiday expeditions at lung-torturing elevations or are just after an escape into nature from the chaotic cities, North India’s valleys have adventures for every type of traveler. Here’s how you can navigate and make the most of them. 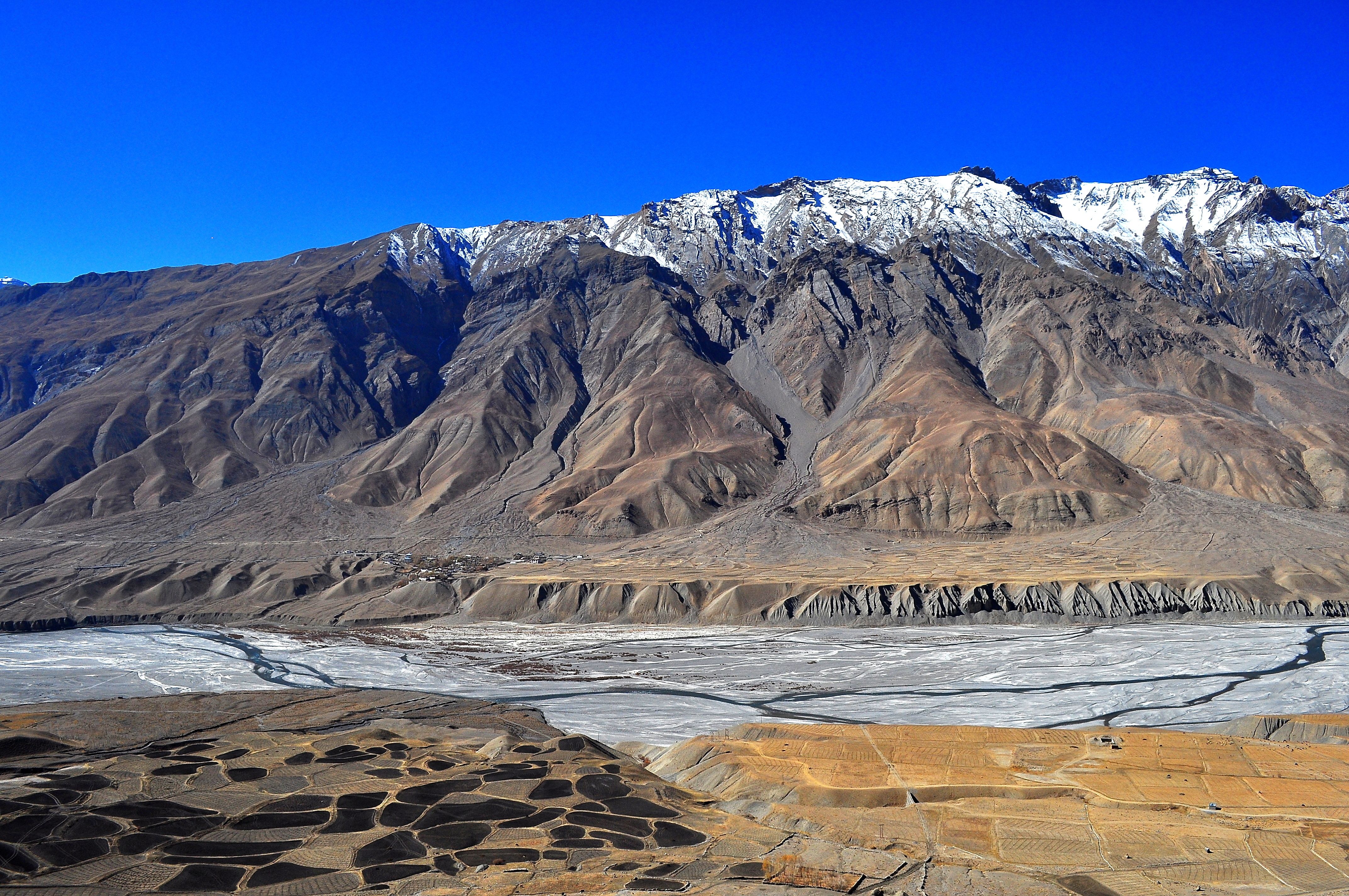 Spiti translates to the “middle land,” which is a fitting description of this high-altitude valley that separates India and Tibet. It’s characterized by a dry desert environment with villages appearing like small oases on the rugged valley floor.

It’s emerged as one of the most popular destinations in Asia for motorbike enthusiasts. In high season, the roads connecting Spiti Valley with the major nearby cities of Manali and Shimla become clogged with Royal Enfield motorcycles, as both foreign and domestic tourists chase one of India’s most epic road trips. It’s also possible to tackle the road by bus, but expect a full-day jaunt of endless rough and bumpy roads.

You can head to Spiti from either the nearby Kinnaur Valley or Manali. Whichever you choose, you’ll notice a dramatic transition from the green, fertile slopes of the lower Himalayas to the dry, desert-like landscape of the Tibetan Plateau. Spiti is technically open all year round for visitors. However, the Manali road is only open for a short time, from June to September, and remains snowed under for the rest of the year.

Aside from biking in and out, there are plenty of hikes available in the valley itself, from day hikes to nearby villages to multi-day traverses over the valley further afield. However, the elevation of Kaza, the main town in Spiti, should not be overlooked as it sits at around 12,500 feet. Acclimatization is essential if you’re planning any physical activity. 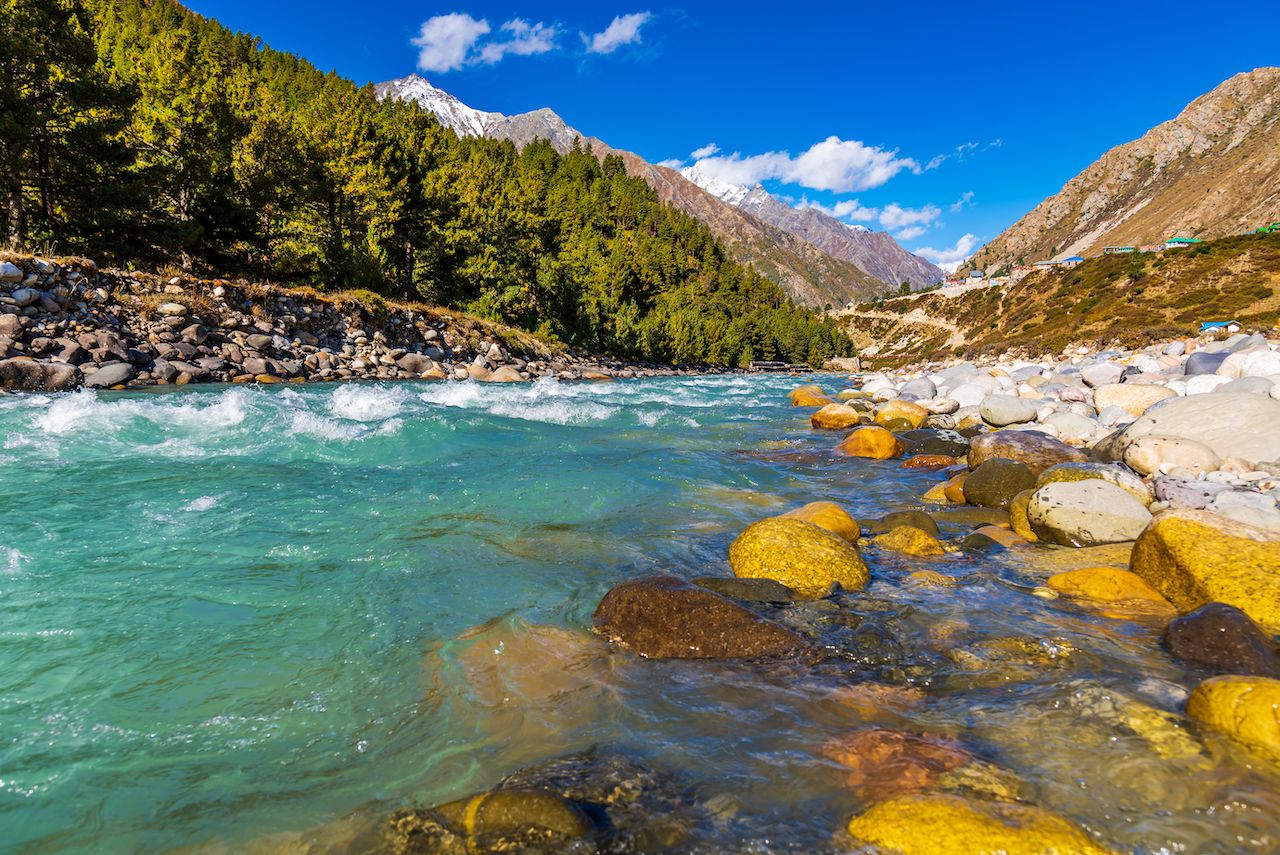 Just over the mountains from barren Spiti, you will find a lush, green environment at a slightly easier-to-breathe altitude. Kinnaur Valley is home to small villages sitting amongst apple orchards, with Himalayan peaks towering right above.

It is more accessible than Spiti, with roads open all year round — although spring and autumn are the most popular seasons to visit. Its proximity to Shimla, the state’s capital, also makes it a popular destination. If you leave the main road, however, you’ll find more secluded places to enjoy. As the last village on the Indo-Tibet frontier, Chitkul is a favorite choice, and it’s a perfect place to relish the incredible Himalayan landscape without the traffic.

Mountain biking has recently emerged as a popular activity in Kinnaur Valley, with single and multi-day excursions available. It’s even possible to ride between Kinnaur and Spiti Valley, which, at an epic two weeks, is one of North India’s ultimate adventures and is not for the faint hearted. 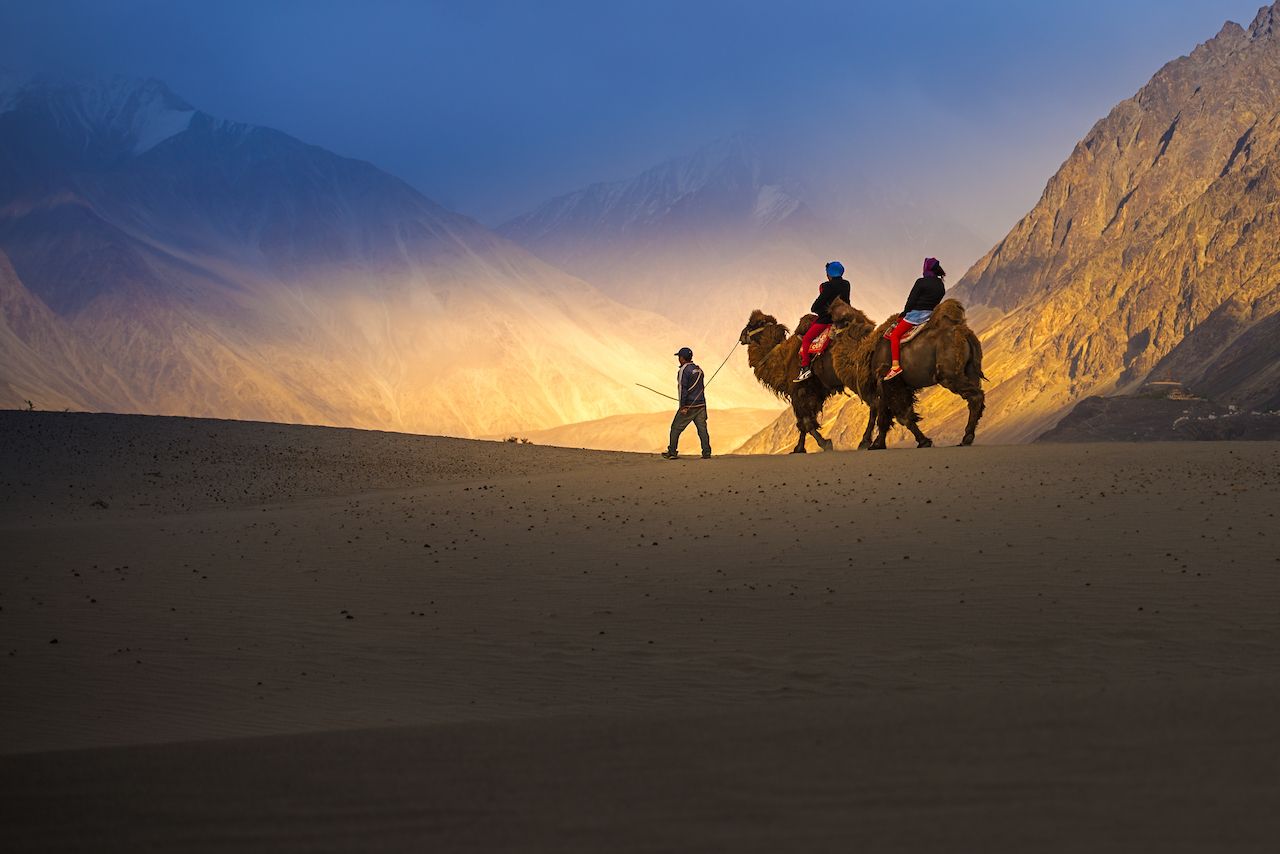 Once an old trading route that connected Tibet with Pakistan via the Karakoram Pass, Nubra is a high-altitude desert valley that is home to some of the most otherworldly landscapes on the planet. Its incredible contrasting terrain includes rolling sand dunes surrounded by snow-capped, rugged mountains and glacial rivers that run through the valley like arteries.

Getting to Nubra requires a drive or ride along one of the highest motorable roads in the world, which most people tackle by motorcycle or jeep. Once there, taking a ride on one of Nubra’s double humped camels is considered a quintessential experience. They are usually arranged around the sand dunes at Hunder, a village in the middle of the valley, where the magnificent landscape can be most appreciated.

Situated in the very far north of the country, Nubra was one of the last places to be opened up to foreigners on the subcontinent, making it an interesting cultural experience as well as a visual spectacle and exciting adventure. The road connecting the valley with the rest of India is completely snowed in during winter, and by far the best time to take the road trip is in summer. 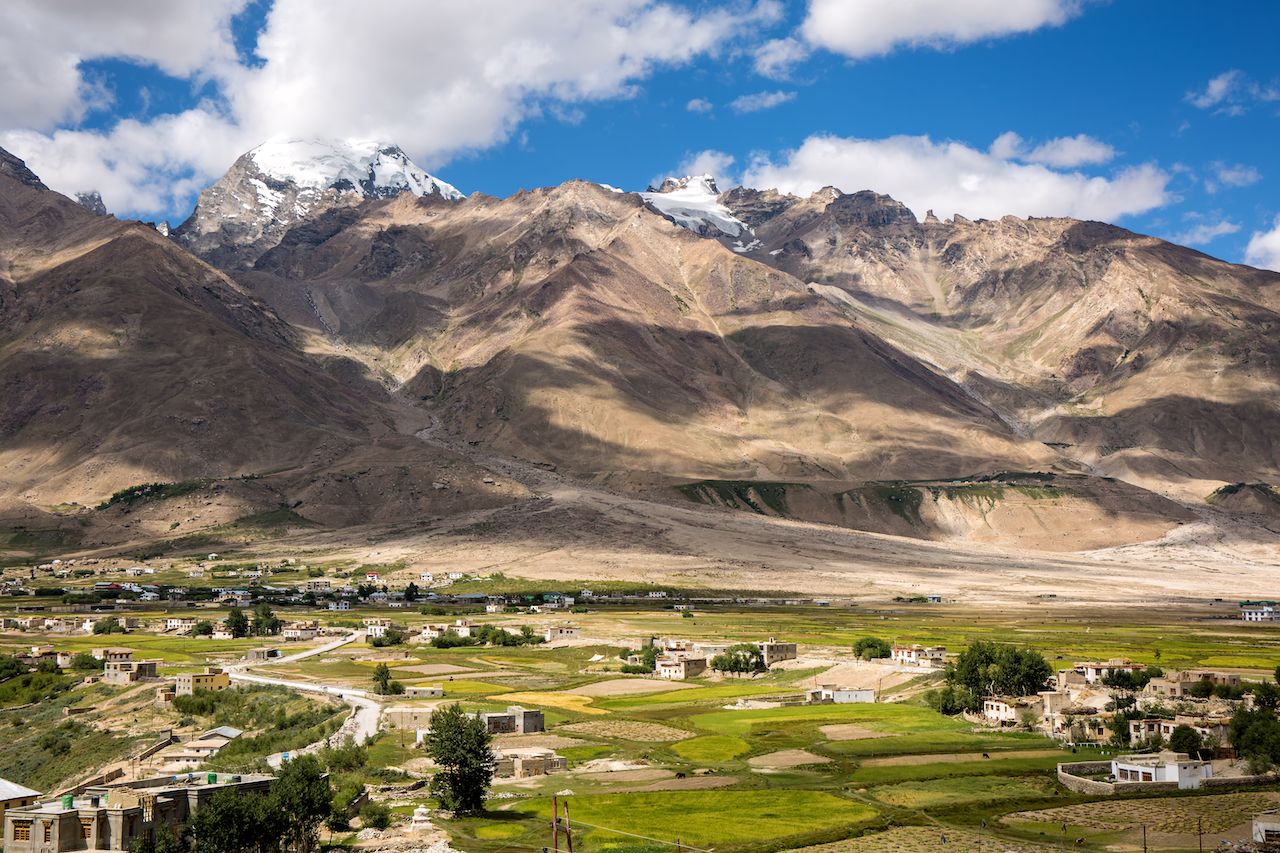 Zanskar Valley is one of the remotest places left on the subcontinent and is much less visited than other areas in North India. This makes it a true adventure for those with time on their hands. It’s yet another high-altitude valley with jaw dropping, rocky mountains, and a mostly arid landscape. However, unlike Spiti or Nubra, it sees much less traffic. It’s not unusual to be able to enjoy panoramic views of the rugged Zanskar range without another soul in sight.

The area was part of the former Tibetan kingdom, and the valley is dotted with ancient Buddhist monasteries — some of which still require days of hiking on foot to reach. Trekking is by far the most appealing experience that Zanskar has to offer, and it can even make for a more audacious option of getting in or out of the valley to replace the otherwise long and bouncy drive. There are multi-day treks connecting Zanskar with Leh, the capital of Ladakh, to the north or the Leh-Manali road further east. In fact, in winter, trekking in or out becomes the only option, and the famous week-long Chadar trek that traverses the frozen river into the valley is a once-in-a-lifetime experience.

In summer, rafting the rapids of the Zanskar River is also becoming increasingly popular. In a one-day excursion, you can reach the confluence with the mighty Indus River that gave India its name. If it’s your first time, half-day excursions can be a great introduction to the world of river rafting. 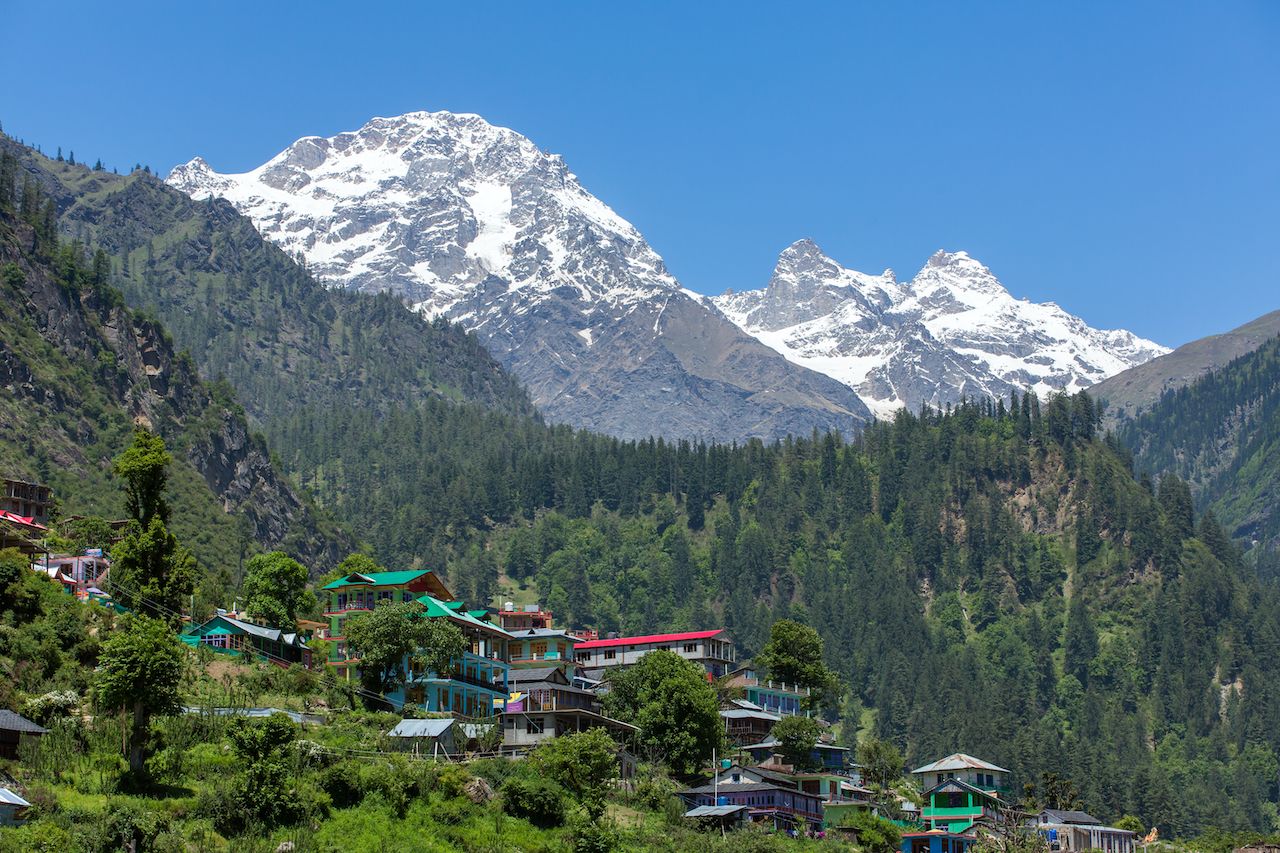 This lush, forested valley has become a favorite backpacker hangout, where travelers come to relax away from the intensity of India’s larger cities. It’s got a well-known reputation as a hippie magnet with live music cafes and quality hashish that is grown in surrounding villages. However, the incredible and not-too-distant Himalayan views also mean that it is where you can find some of India’s best treks and rock-climbing opportunities. There are camping treks as well as plenty of waterfalls and villages to explore on more gentle day hikes.

The most common and scenic multi-day options are Chandrakhani Pass and Sar Pass — the latter of which is also where many rock climbers head for some of India’s best climbing routes. It’s a perfect area for rock-climbing novices, and introductory day trips can be arranged from popular villages in the valley like tourist-oriented Kasol.

Parvati is much more accessible and comfortable when compared to exploring some of the other more remote valleys in North India. The presence of a well-developed tourism industry there means you can have all the comforts like good food and strong WiFi but still indulge in Himalayan views and hike as strenuously, or not, as you please. 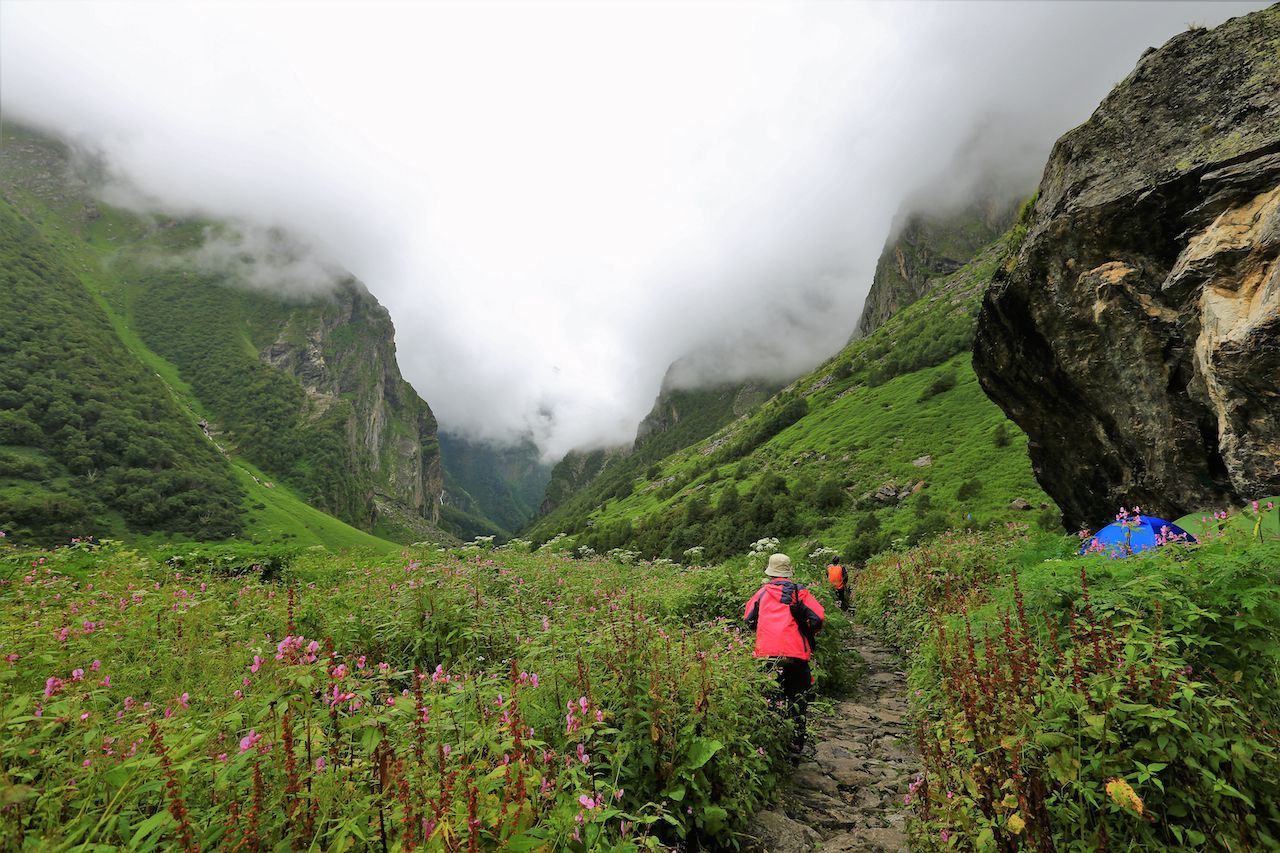 This national park bordering Tibet and Nepal is famous for having more than 300 varieties of rare alpine flowers. It has even been recognized as a UNESCO World Heritage site since 2005. The most beautiful part of the valley is only accessible by foot and can be done in one long day hike. The valley’s incredible flora change month to month in summer, but it’s widely accepted that after the first monsoon rains, the blanket of colors is at its most prominent. The park is only open from June to October each year.

The valley requires a bit of planning and traveling to reach. A long full day by road will get you from tourist favorite Rishikesh to Joshimath, the closest town, where you’ll then need to drive another hour to the park entrance. It’s best to stay the night in Joshimath and head for the valley in the morning as the hike itself takes around six to eight hours. If it were an easier place to get to, it would likely be one of India’s most “Instagrammed” locations — as the colourful fields and steep mountains covered by monsoon mist make for a striking photo that’s worth all the effort. 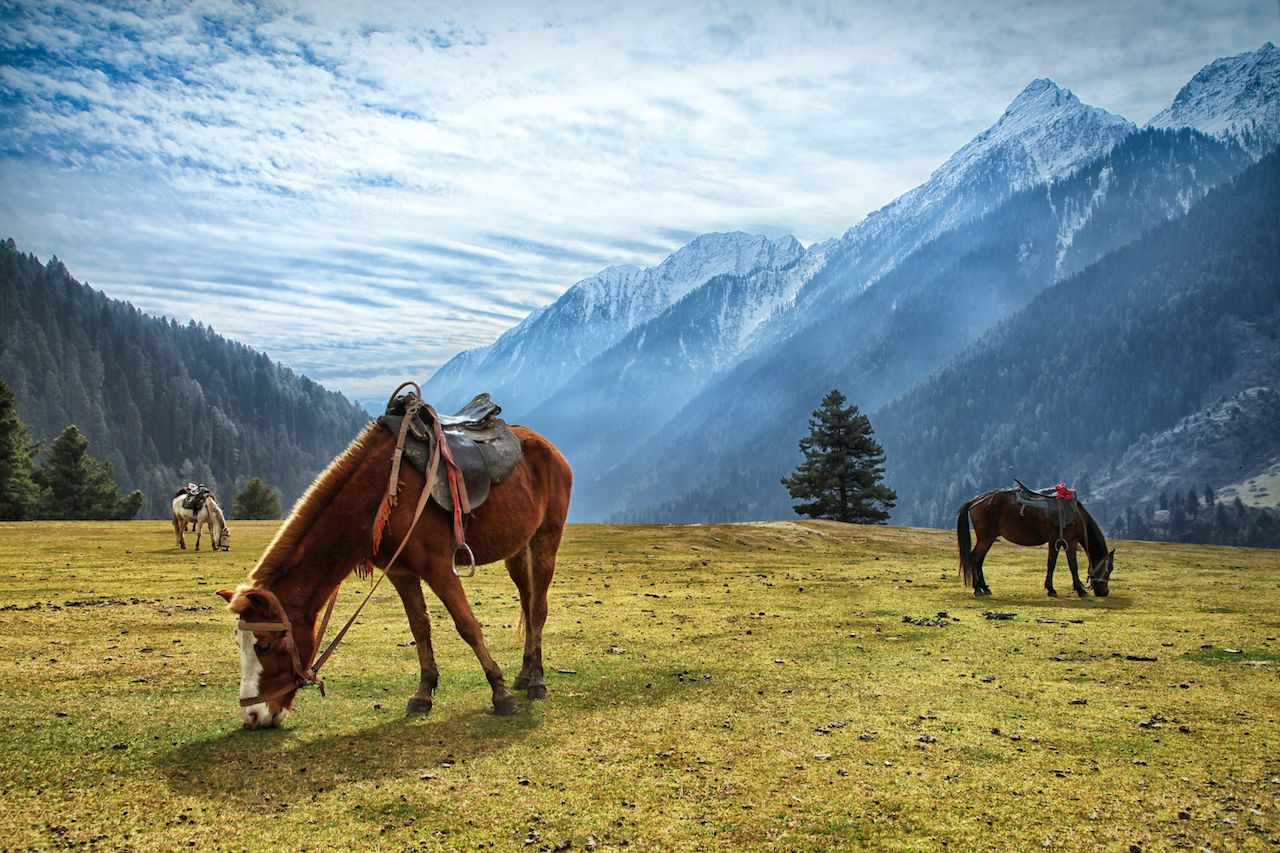 Aru Valley could easily be referred to as India’s “mini Switzerland” for its green, snow-capped mountains with herds of sheep and goats crowding the slopes. However, its position in Kashmir has made it significantly under-visited by most people to North India due to the political turmoil that often shrouds the region. In reality, it is a pocket of peace and serenity, and the friendly inhabitants will repeatedly reassure you that the village and valley itself have not seen violence for decades.

Those who do make it to the area tend to base themselves in Pahalgam, a town with regular travel comforts like hotels, WiFi, and restaurants. However, just 7.5 miles further into the valley, you can also stay in Aru village, home to a handful of comfortable guesthouses and an incredible mountain retreat that will certainly make you want to stay longer than expected. The village is spectacularly encircled with vibrant emerald mountains sprinkled with snow all year round. From there, you can follow the many trails that lead even further into the valley for beautiful day hikes. Or, if you’re up for a longer trip, you can organize multi-day treks and horseback riding excursions deeper into the area to gawk at high glaciers and lakes that reflect the surrounding mountains like a natural mirror.

Aru Valley is accessible all year round, although snowfall in winter limits some of the trekking options. If you do find yourself there in winter, you can always swap the hiking boots for skis, with nearby slopes home to some of the best skiing in the Himalayas.

OutdoorNortheast India Is the Country’s Most Adventure-Packed Region
Tagged
Outdoor National Parks Trip Planning India
What did you think of this story?
Meh
Good
Awesome