It’s a classic summertime debate: ocean or swimming pool? Oceans, on the one hand, are grand, awe-inspiring bodies of water that make for solid Instagram photos, and they’re often right on a beach, which makes for even better social content. On the other hand, pools are more subdued, more conducive to relaxation and simply soaking up the rays. The choice between a beach day and a pool day can be difficult, and the options often feel mutually exclusive. Well, that’s not always the case. A variety of ocean pools around the world, both naturally formed and manmade, are the perfect confluence of these two summertime experiences. Ocean pools are saltwater pools abutting the sea and are constantly renewed by waves. They’re among the most picturesque and peaceful wonders of the world. From Italy to Australia, these are the coolest ocean pools around the world. 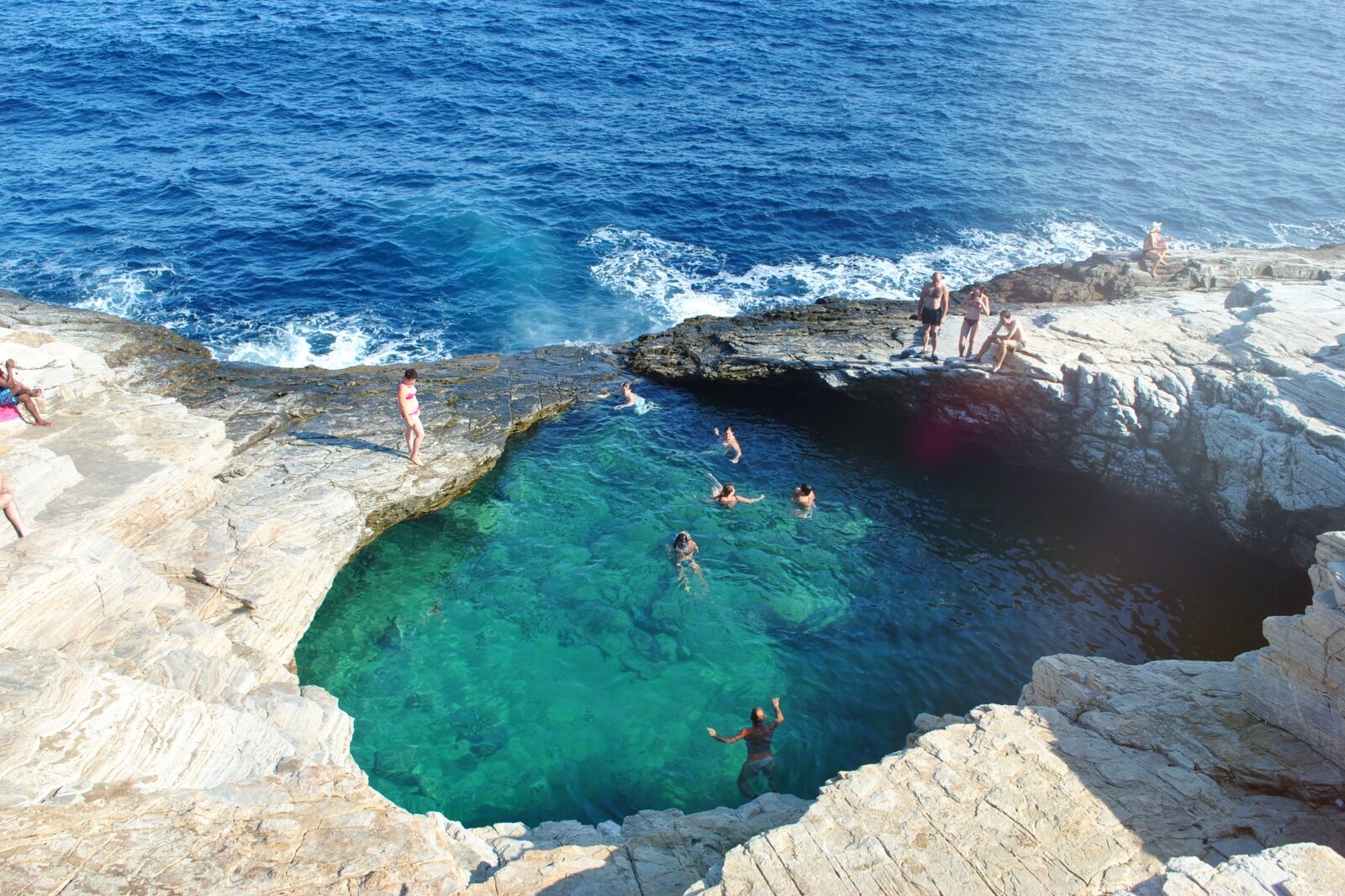 A geological wonder, Giola Lagoon on the island of Thassos, is a sea lagoon carved into the rocks. The cliffs surrounding the 65-foot-wide lagoon have natural terraces, and there’s no way to enter the pool except to take a leap of faith and jump. Though the water comes from the Aegean, it’s warmer than the sea with a sandy bottom, making it ideal for swimming even in spring and fall. Getting there isn’t the most convenient — you’ll have to drive a few miles down a dirt road, then follow a walking path — but it’s totally worth it. According to Greek myth, the lagoon is actually the eye of Zeus himself. 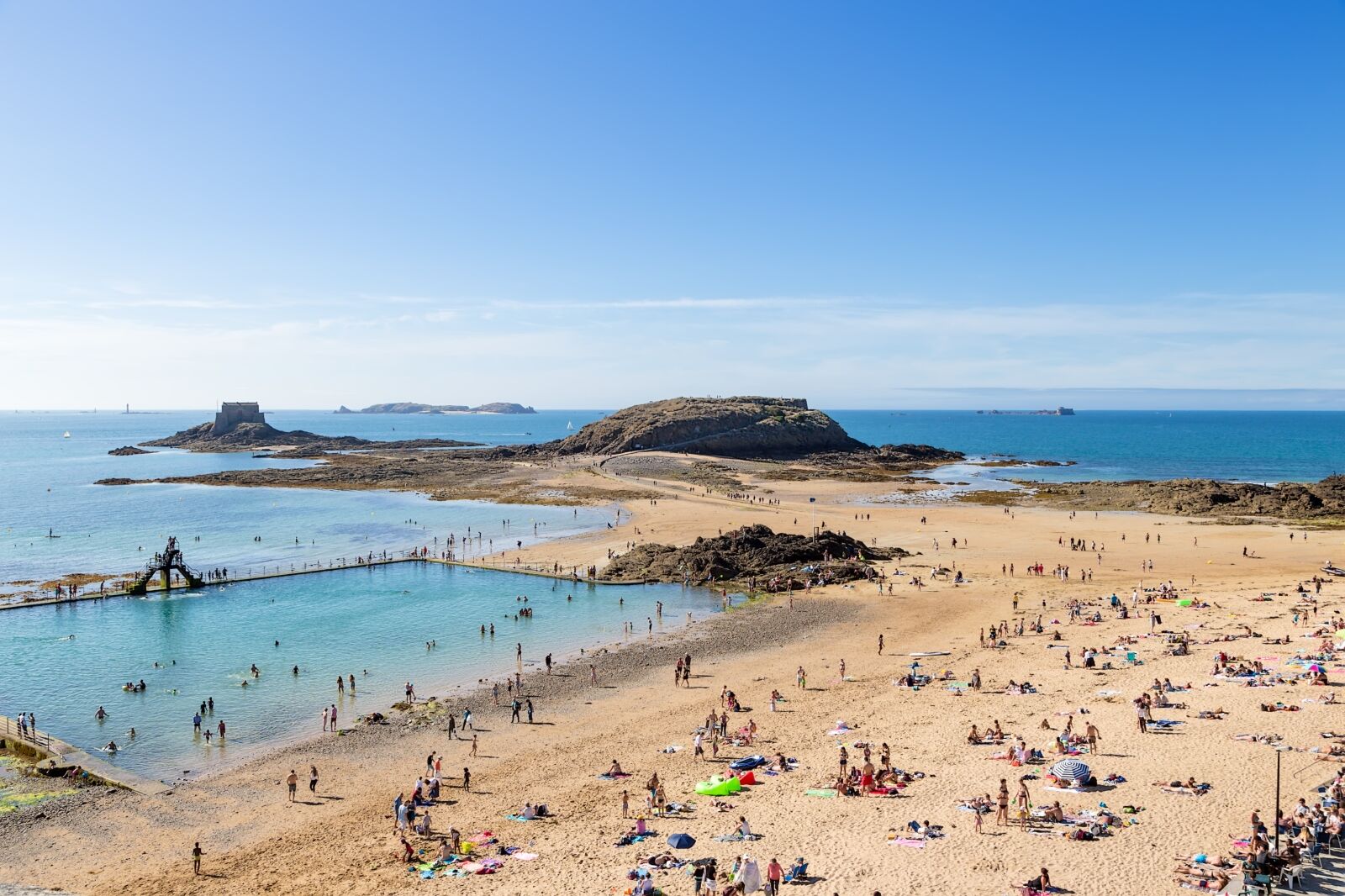 With some of the highest tides in Europe, rising up to 46 feet, Plage de Bon Secours is anything but a calm sea. By contrast, the Saint-Malo pool right beside it is still and peaceful. Designed by Rene Lesaunier in 1937, the sea pool has a diving tower that rises from the seawall and is open for swimming 24 hours a day. The sandy beach surrounding the seawater pool is also extremely popular, both for the ocean itself and its views of the nearby 17th-century fort. 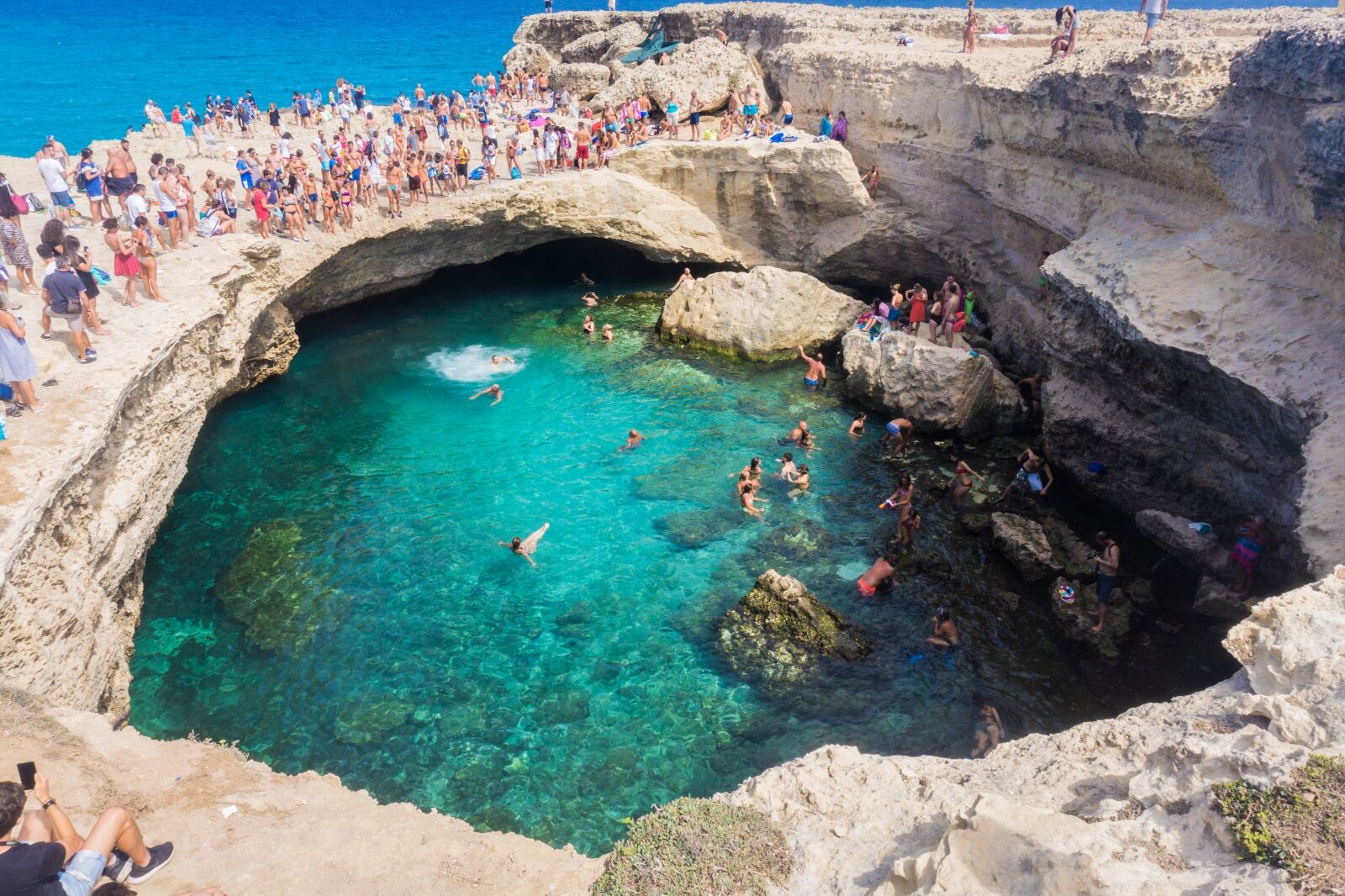 Grotta della Poesia, or “the Cave of Poetry,” is an egg-shaped crater on the Adriatic Sea, known for its clear blue-green water and cliffs perfect for diving. One of the most beautiful natural swimming pools in the world, you can swim directly into the sea via a connecting tunnel in the cave. Grotta della Poesia is also nearby Two Sister Beach, the Sea Stacks of Sant’Andrea, and almost directly beside the ruins of a 16th-century castle. Buses to the cave run all summer until mid-September. After that, you’ll need a car to reach it. 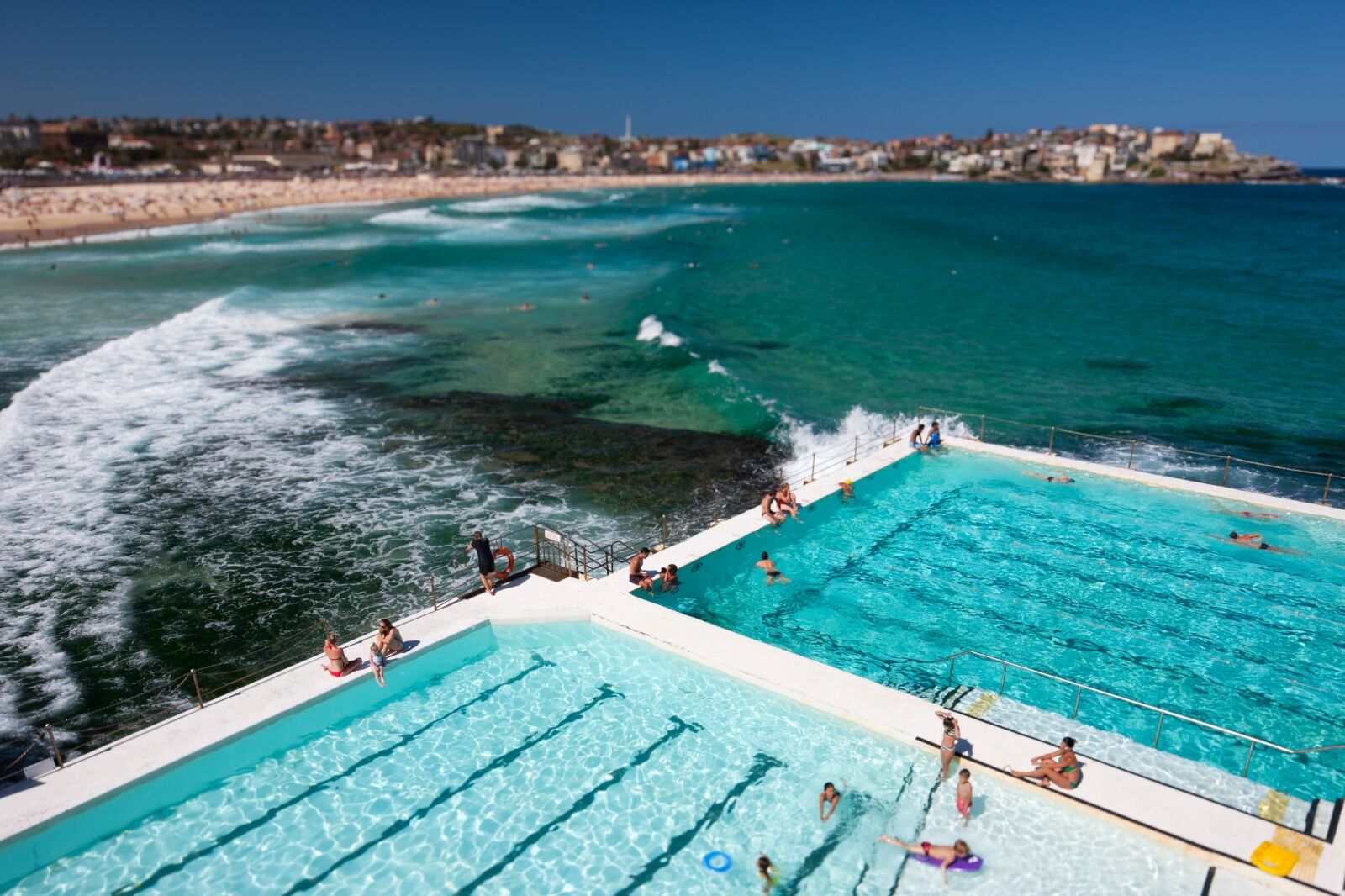 A staple of Bondi Beach in Sydney for over 100 years, the Bondi Icebergs Pool is one of the most photographed pools in the world. It’s no surprise why. This public pool has gained historical landmark status, partially due to the formation of the Bondi Iceberg Swimclub in 1929. This winter swimming club is among the most famous in Australia, and it’s not uncommon to see members — in all seasons — making use of the two ocean-side pools. There’s also a sauna on the property, in case you do decide to go for a winter plunge. 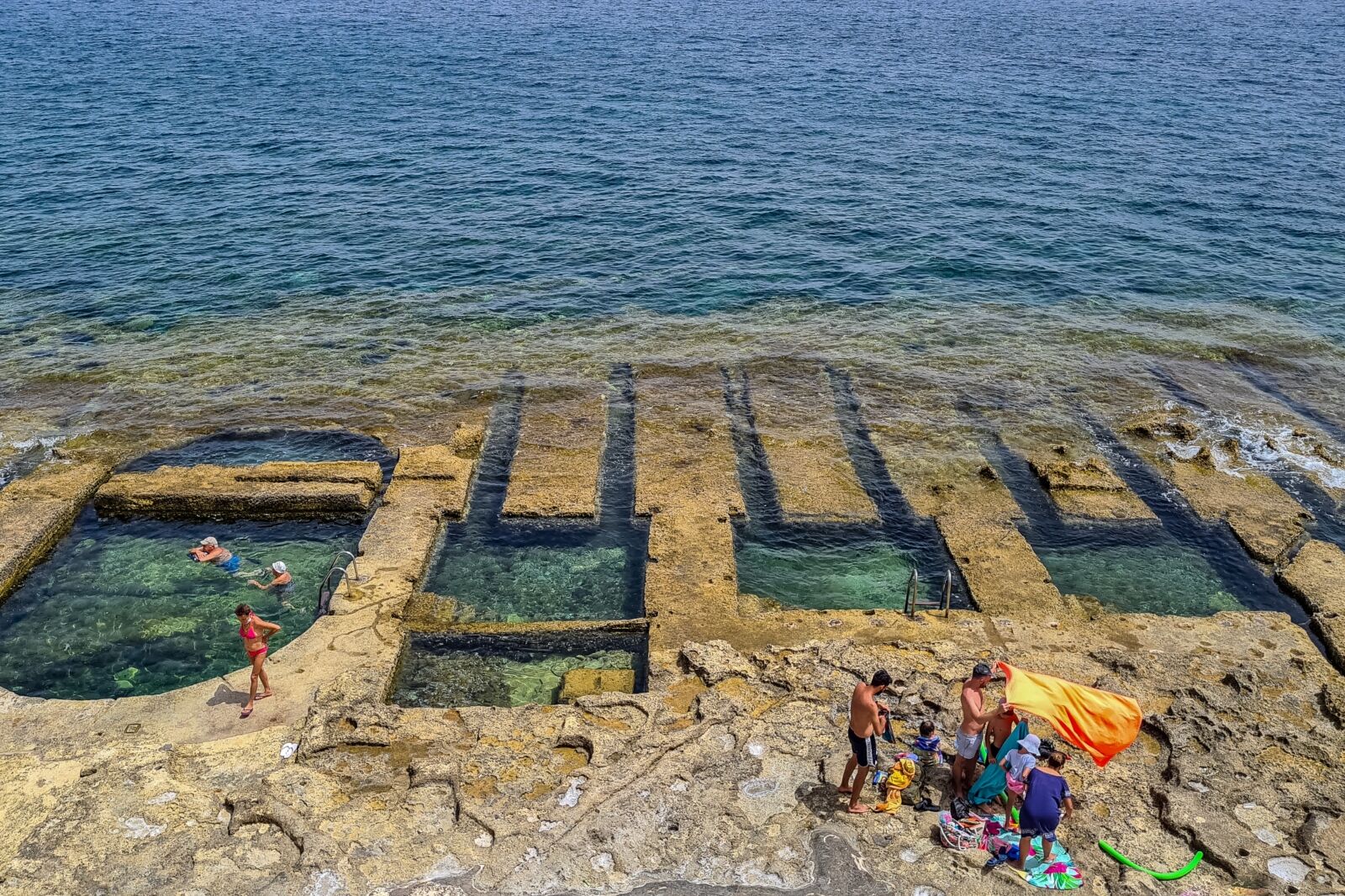 Now that the Azure Window on Malta’s island of Gozo has tragically collapsed, there’s a space open for the “coolest coastal attraction in Malta.” Unlike the Azure Window, the Sliema Rock Pools aren’t a naturally occurring phenomenon, but that doesn’t make them any less impressive or alluring to visitors. The series of square pools cut into the rocky shore is the perfect way to explore the Maltese coast. The swimming holes were dug in the 1600s so Victorian women could bathe in private under little canopies. While the canopies are gone, the holes thankfully remain, with step ladders making it easy for swimmers to safely descend. 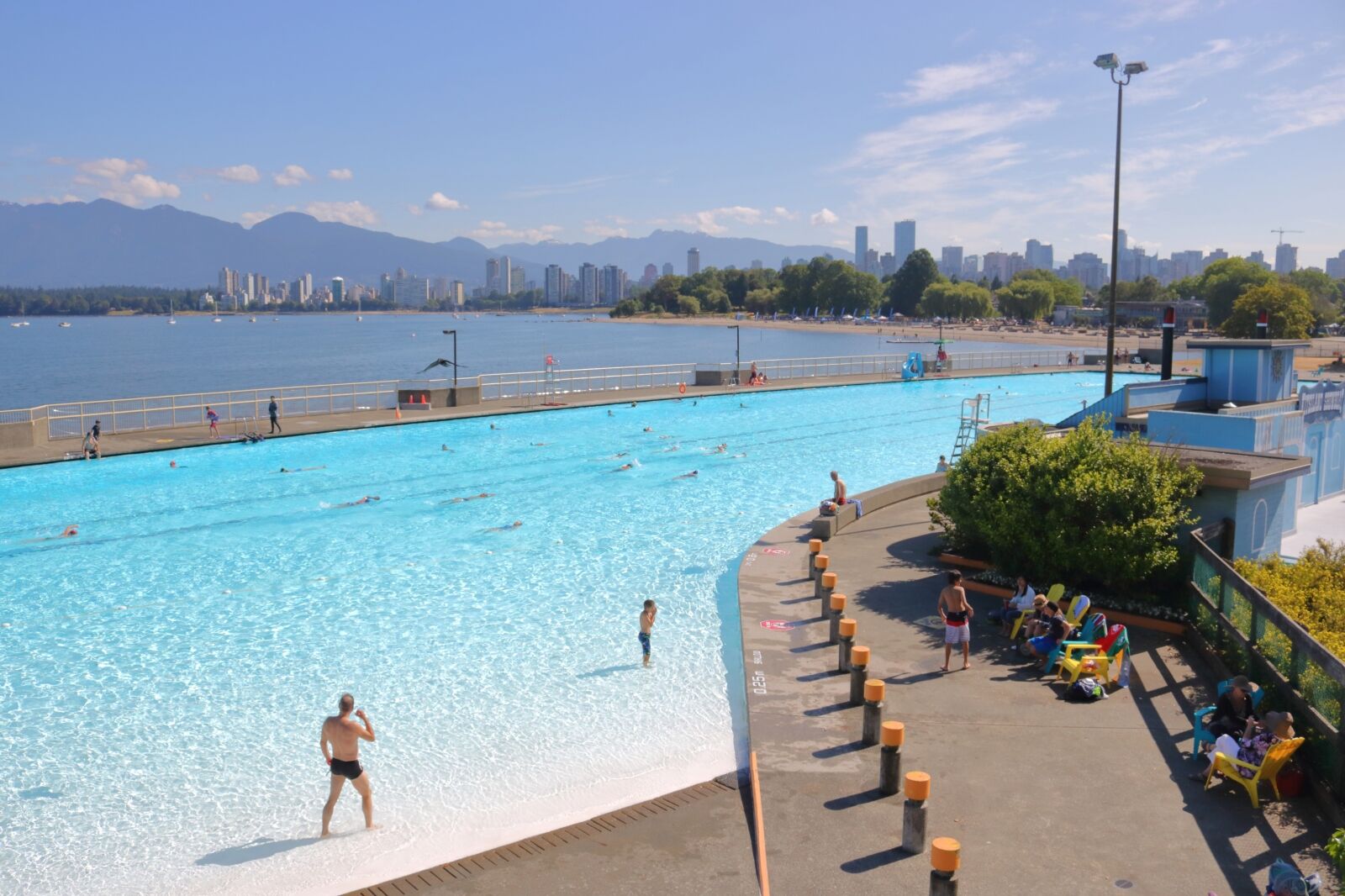 Known by locals as “Kits Pool,” this ocean pool might be the best for honing your swimming skills in North America. Three times as long as an Olympic swimming pool at 450 feet, the heated pool is Vancouver’s only saltwater swimming pool, and is conveniently located near the beach and several cafes. The pool has two water slides, a water park area, and incredible views of Vancouver’s West End. 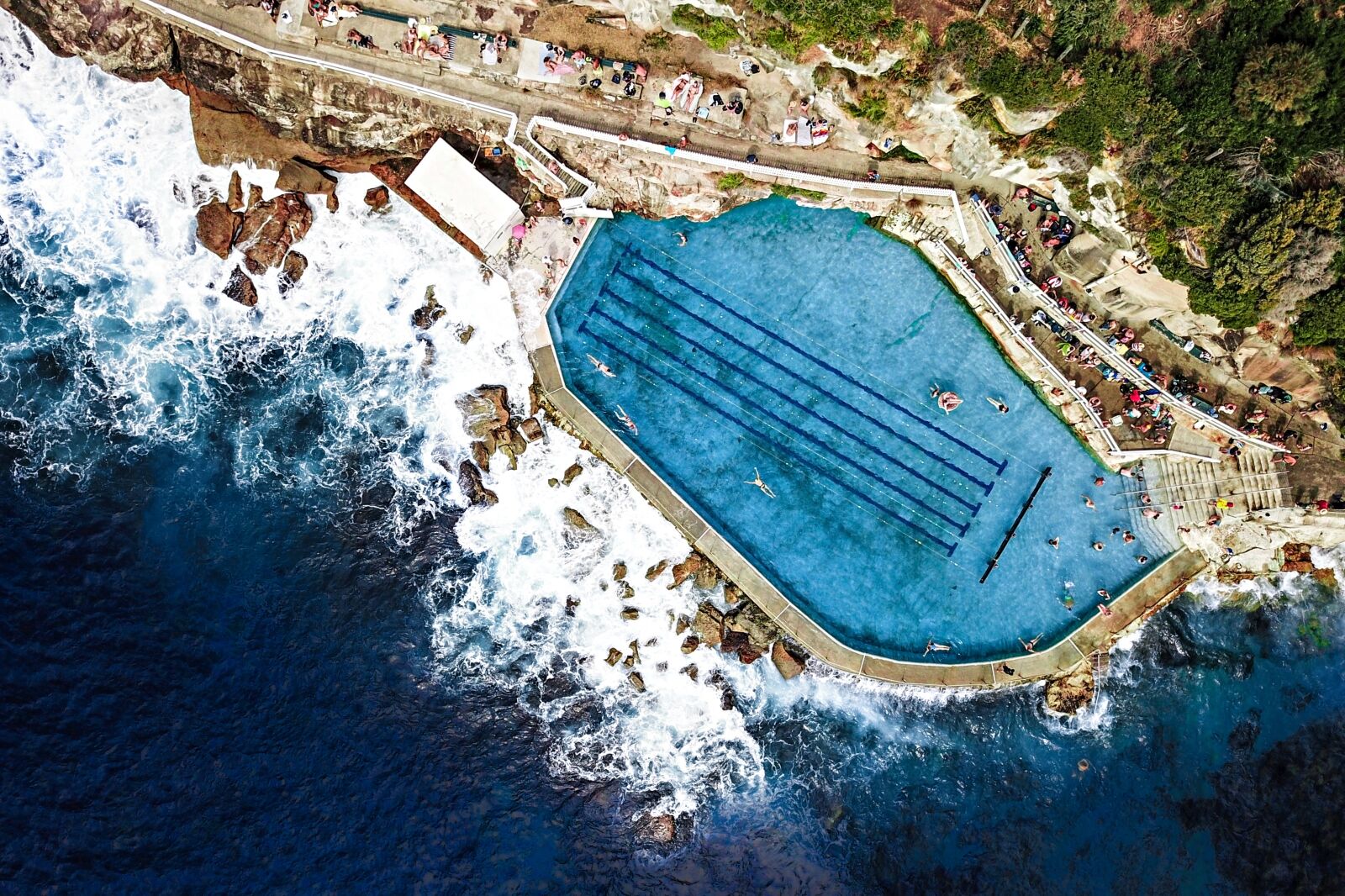 Photo: The Atlas of Photos/Shutterstock

If it hasn’t become clear yet, Sydney is one of the premier cities in the world for ocean pools. Apart from the Bondi Icebergs, one of the most beautiful ocean pools you’ll find anywhere, the city has over 30 others, including the Bronte Baths. While not as famous as the Bondi Icebergs, Bronte Baths are no less beautiful or worth visiting. Built into the rocky cliffs, the shallow pool is perfect for lap swimmers and watching the sunrise over the ocean. And unlike its more popular neighbor, Bronte Baths are completely free. 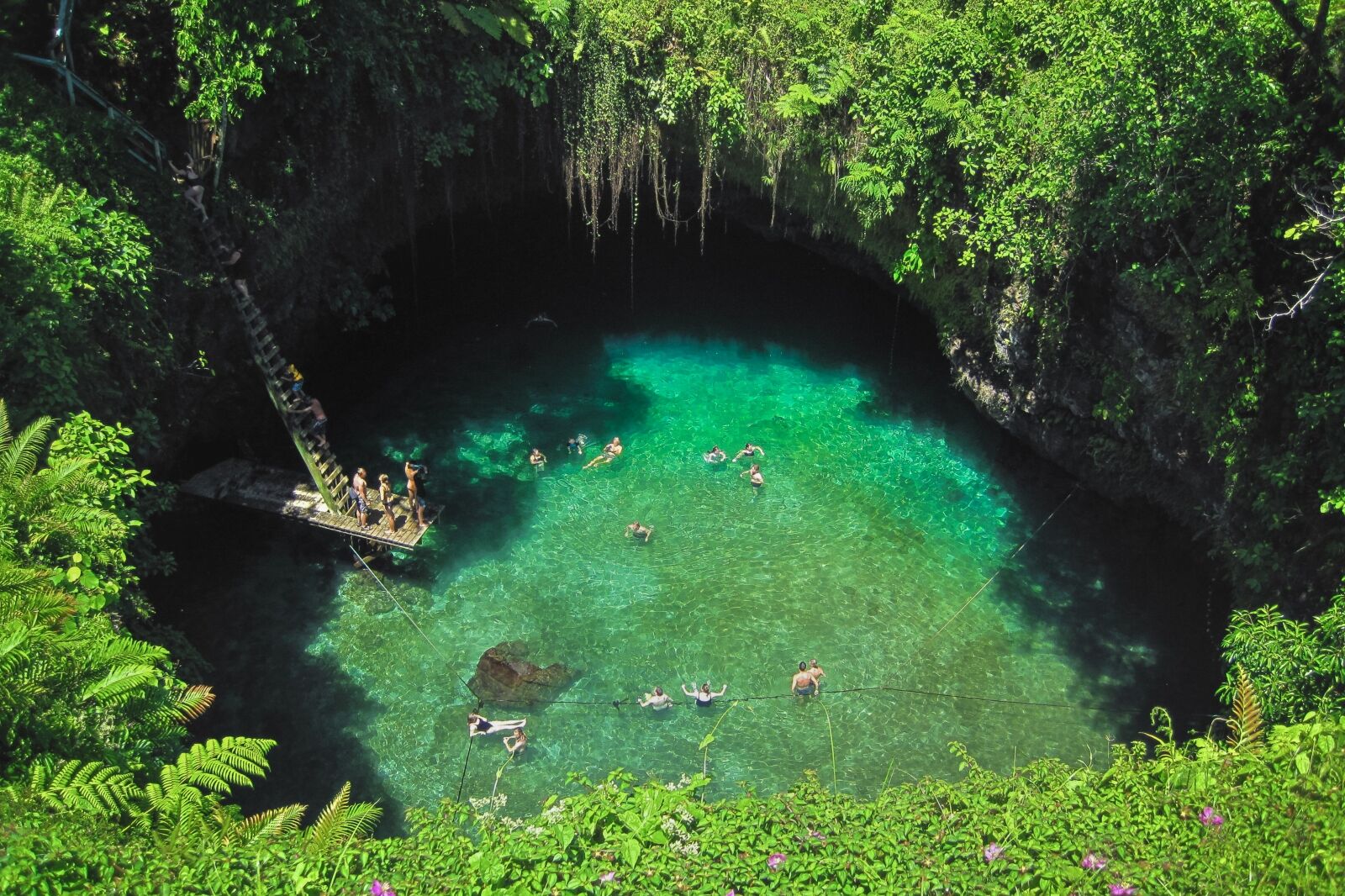 The To Sua Ocean Trench in Samoa was formed over the course of thousands of years by erosion of the lava fields around Lotofaga. This resulted in a series of tide pools and blowholes, of which To Sua is the largest. Meaning “big hole,” To Sua is located at the edge of the South Pacific, surrounded by gardens, and its western side opens into a small beach. Visitors can access the swimming hole via a cliff-side path, and either descend using a ladder or by jumping into the pool below.

Beaches and Islands23 of the Bluest, Clearest Waters on the Planet
Tagged
Beaches and Islands Wellness Sydney, Australia France Italy Malta Vancouver, Canada Samoa
What did you think of this story?
Meh
Good
Awesome