The Mediterranean archipelago of Malta, just over 400 miles off Italy’s southern coast, encompasses multiple worlds. To visit here is to stroll alongside European, African, and Middle Eastern culture and heritage, typically in the same town and often on the same block — and all within just 122 square miles of land. The countryside is peaceful and colorful, especially in spring and early summer when nature is in bloom. The coastline is picturesque, offering paths that lead to historic cities, towns, and villages.

In fact, Malta is full of wonderful places to get outdoors. You might even spot the endemic Maltese Everlasting flower, found only on the west coast in yellow bushes adorning the white cliffs. These walkable excursions offer a diverse taste of the island nation and your best bet at snapping an Everlasting photo. 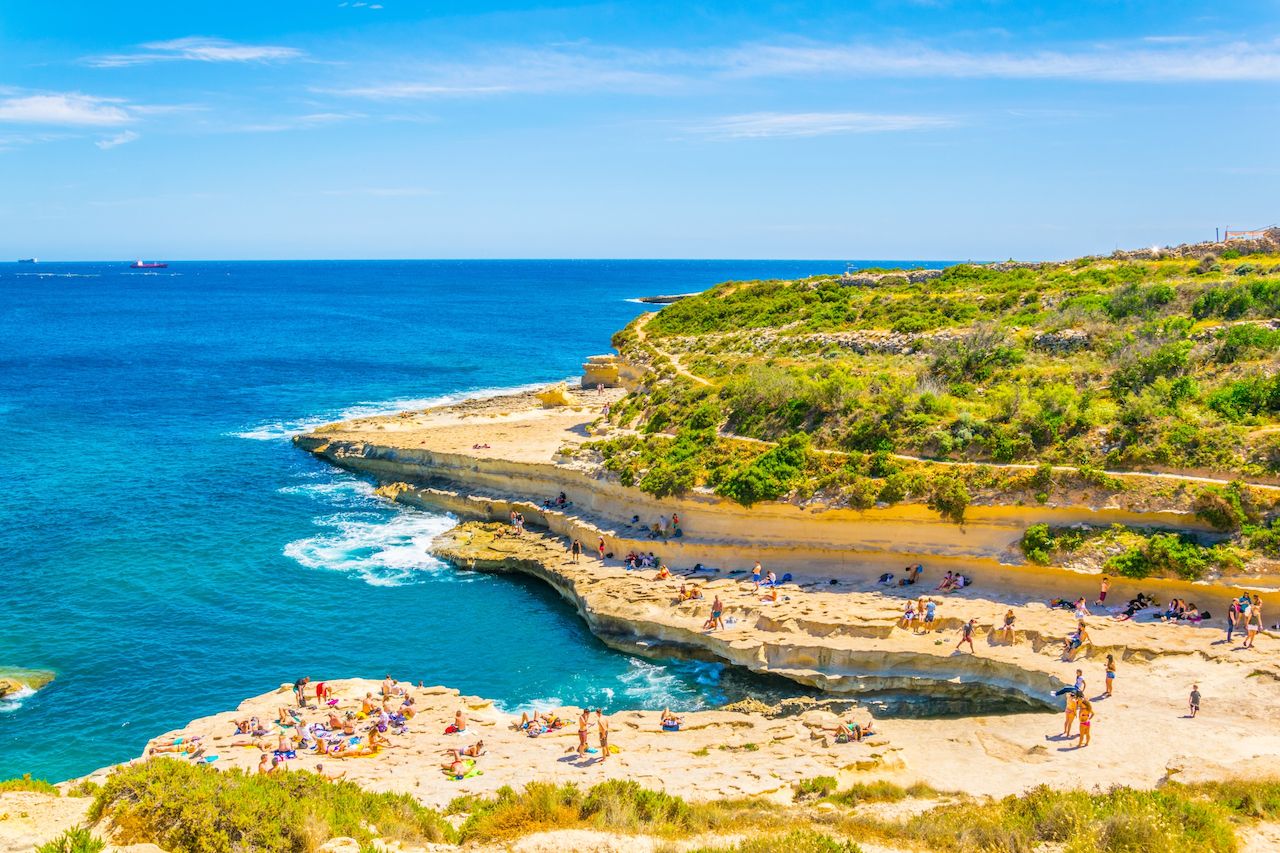 Along Malta’s east coast, and mostly on paths, this easy walk offers excellent views in a short distance. Start from the quiet fishing village of Marsascala, easily accessible from the capital, Valletta. The small, traditional turquoise fishing boats, called luzzu, fill the small port and signal that you’ve found the right spot. Follow the coastline and, after passing the last piers, the homes give way to countryside.

You’ll then walk along terrain sloping towards the sea and over two circular bays, past a few thin beaches accessible only by boat. The highlight of the walk is deviating along Ras il-Fniek, the slim spit of land that divides the two bays, 50 yards wide at its thickest. Walk to the end and face inland. The two blue bays will both be in your view range, so have a camera at the ready. 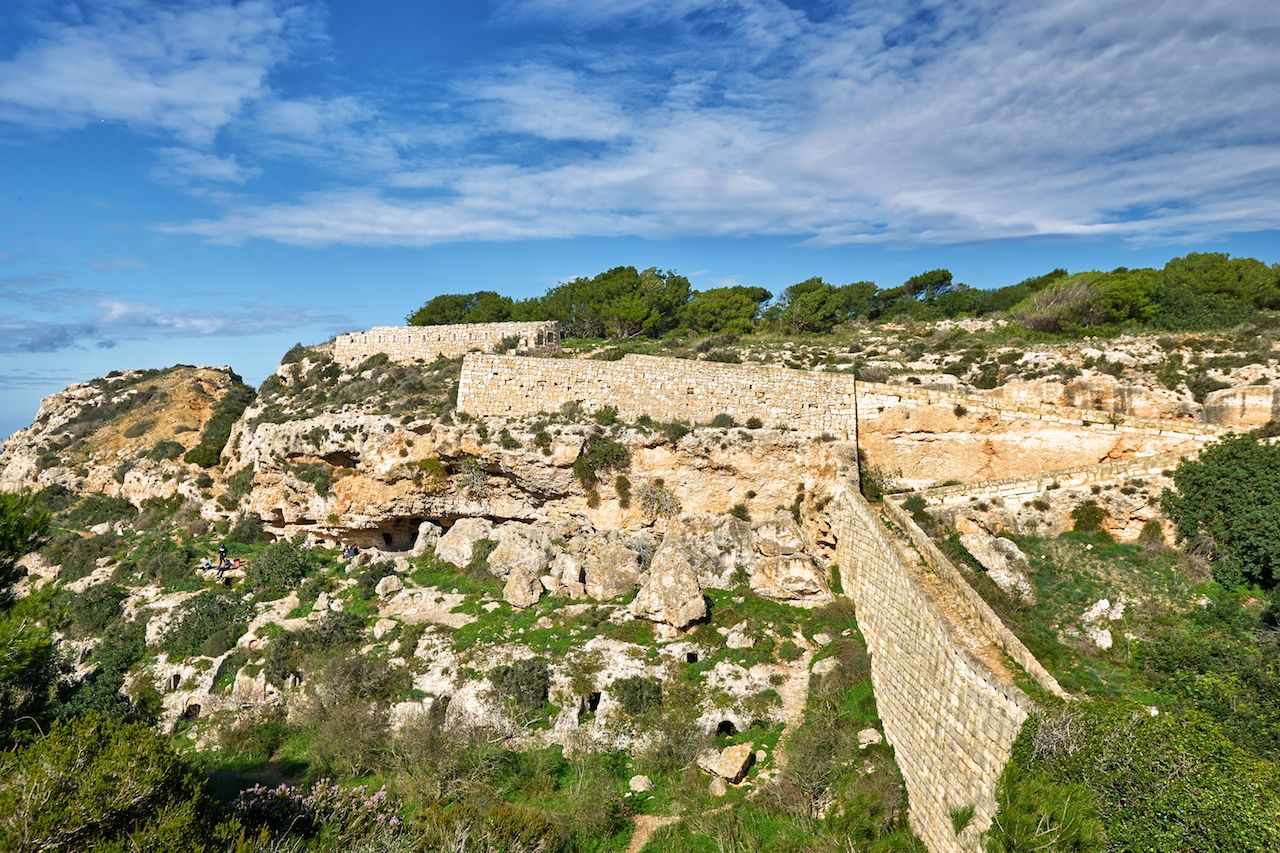 Our favorite trek follows the Victoria Lines, fortified walls completed by the British in 1897. Running east-west across the northern half of the main island, they follow a natural geological conformation called the Great Fault — with fairly steep hillsides and thick, dark-green underbrush. Well-kept forts and stretches of fortification line much of the trail, but the complex is no longer continuous since a century of modern construction and natural wear and tear have broken up several parts of it. Nevertheless, the path is fairly clear throughout its length.

The walls’ sections are especially recognizable in the green patches, the clean white limestone line marking its presence in an undulating and, by Maltese standards, densely inhabited landscape. This walk, in particular, offers views of the island that can change starkly as you move between sections of the hike. After some houses, a valley; after the valley, fields; and at its the end you suddenly see the blue sea popping out behind a natural mound. Expect very few people and many quiet moments. 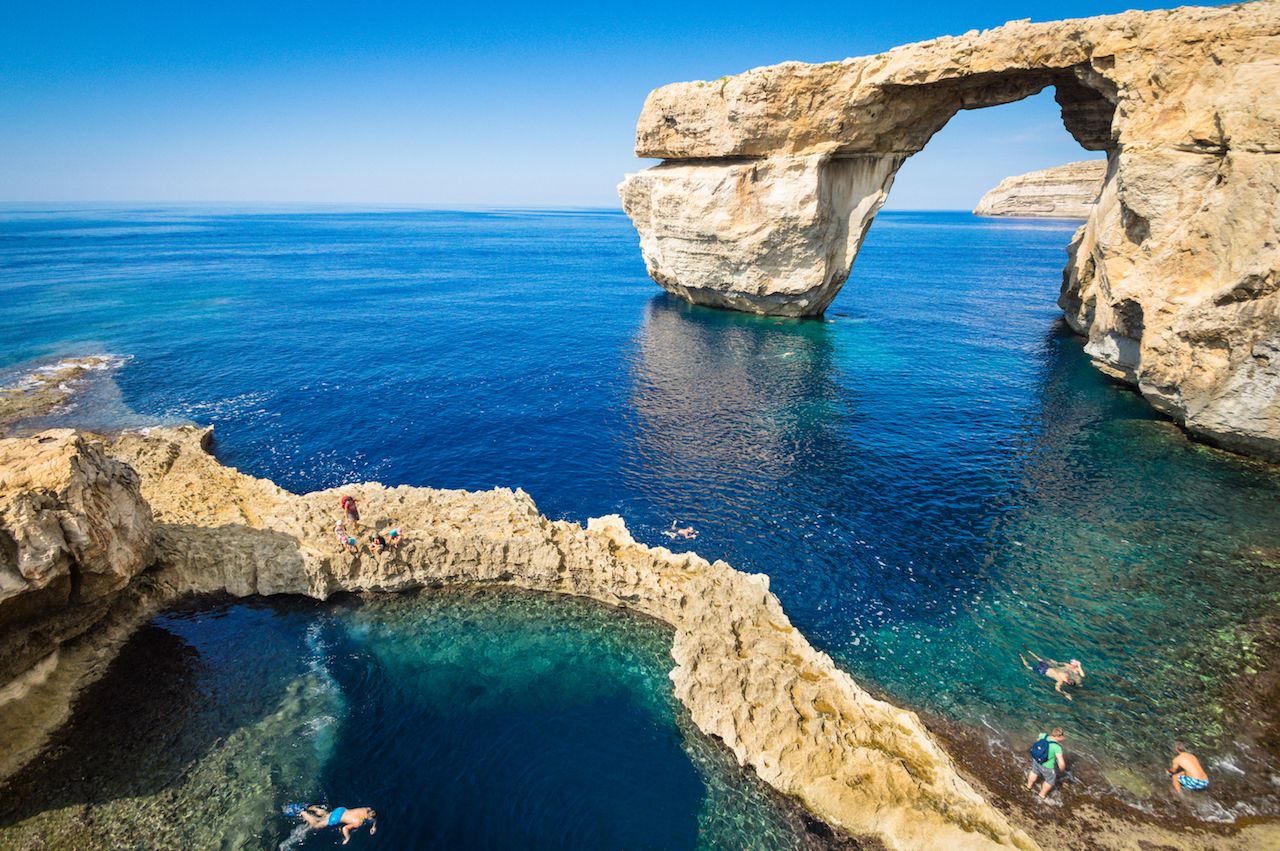 This relatively short walk on the northern island of Gozo packs a major punch in terms of endurance and visual reward. Start at Ta’ Sarraflu (San Raflu Lake). The pond, alive with varied flora and dotted with bright-colored flowers, is one of the few permanent water bodies on Malta — a unique sight. Small, and situated at a lower level from the road, the healthy green plants pinned around the water are an oasis in the middle of an otherwise dusty countryside. As you head west, the path then hops to the other side of the road and towards the coastline, and from here, the walk is aligned to high cliffs overhanging the sea.

The land shines white, green, and brown, rising on your right and contrasting with the vast view of the blue Mediterranean to the left. This point of the trek showcases a beautiful and elegant juxtaposition of colors and natural elements, and the faint sound of waves crashing against the cliffs below is a constant sound of nirvana — especially if the wind is high and the water rough. On land, you might catch a bunny, mouse, or bird dashing from one shrub to the other.

Halfway through the walk, on the tip of the second westernmost point of the Malta archipelago, find Ras il-Wardija, an ancient Punic Temple. Looking like a mysterious squared-off cave dug into the rock under the path, it’s just one room with a few alcoves in the walls. The temple marks an acutely angled corner in the coastline’s jagged, white cliffs. Walk a few steps and you have a view in a new, northwesterly direction of the vast Mediterranean.

The highlight of this walk, however, comes about a mile and a half due north. The Dwerja Tower, built in 1652, is one of many watchtowers on the islands. This one, however, offers the bonus of actually being accessible to trekkers. You can climb onto the roof to admire the view.

You are not done once you’ve seen the tower. Just another 10 minutes of walking takes you to the interior side of the cliffs to the Inland Sea. It’s a seawater lagoon connected to the Mediterranean by a narrow natural arch opening in the tall cliffs. You access it via the gently sloping stone beach. The luzzus fishing boats often sit ashore. 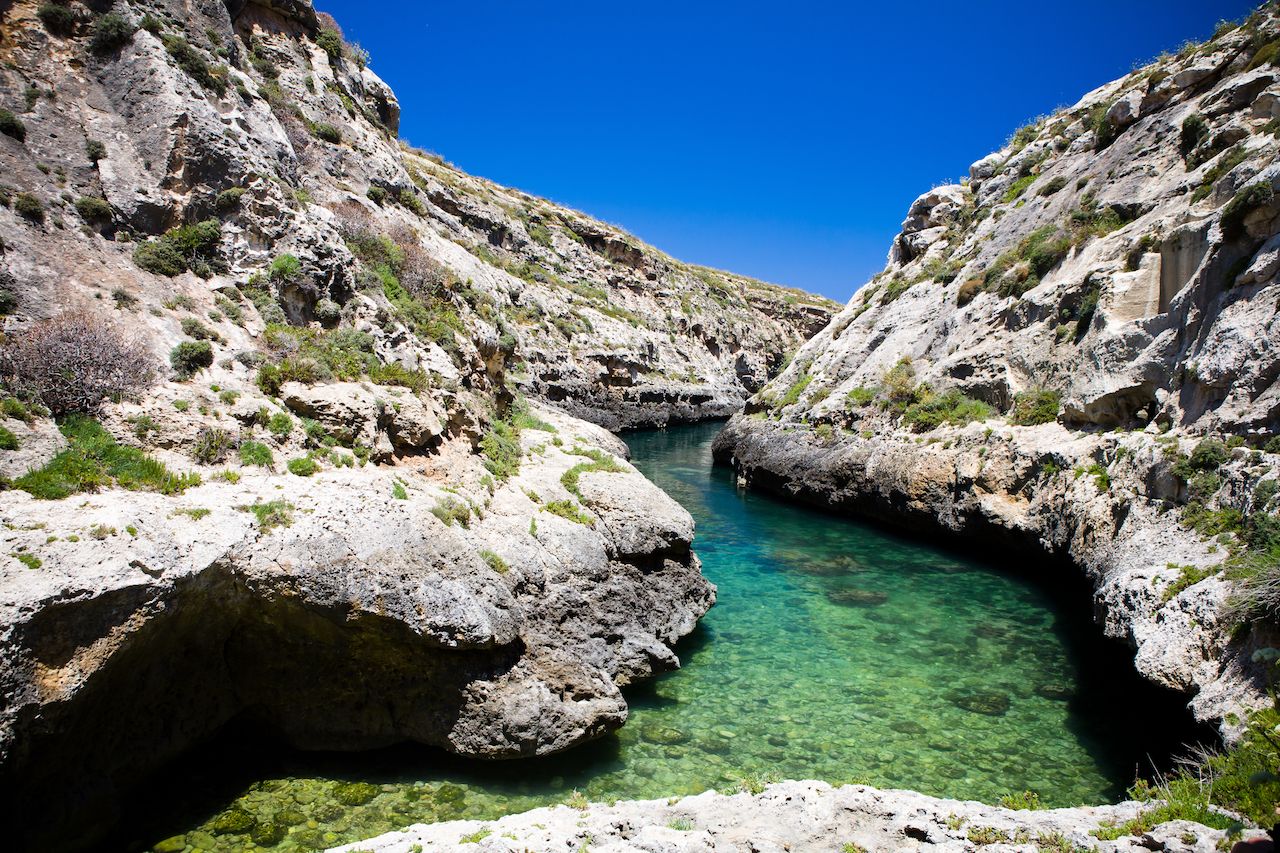 The Short One is also on Gozo island. It’s a quick and easy hike that can be done in just a part of the day. Start from Raqqa Point, the northernmost point of Gozo. The crystal-clear waters around the sea-level rock protrusion are a favorite spot for divers, but they can be extremely rough on a windy day.

Walking east, you’ll be on the road, though halfway through it’s worth taking a quick detour to walk down to the 350-year-old saltpans dug into the rock in a checkerboard pattern. The place is quiet, and the juxtaposition of the man-made rectangular shapes and natural elements make for a good stopping point.

You’ll soon arrive at Wied il-Għasri (Ghasri Valley). This deep and very narrow gorge cut into the limestone rock showcase grey, white, and blue tones, speckled with the greenery growing from the rock. At the bottom of this gorge, the clear, turquoise-tinted water is rarely crowded — and a perfect natural pool for a swim. This is another favorite spot for divers. 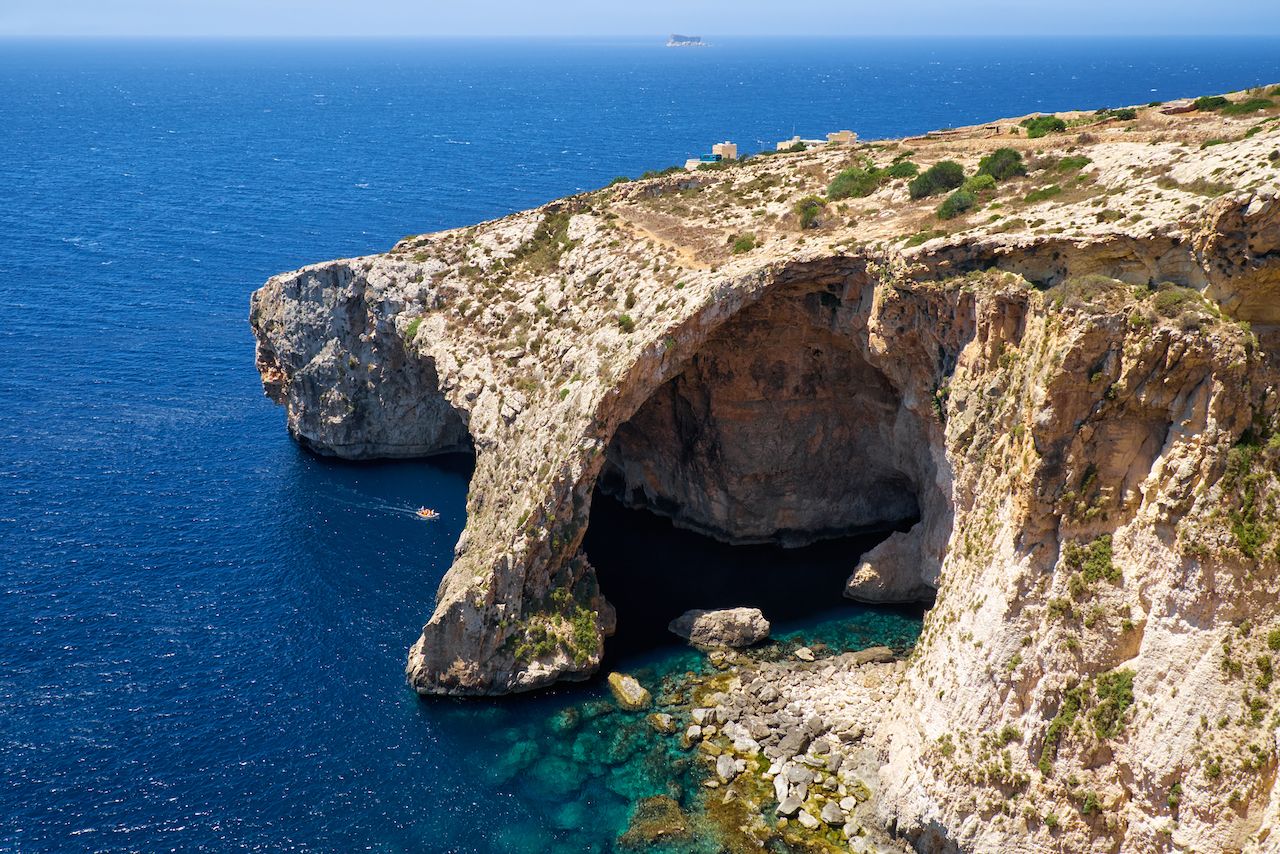 The Long One, on Malta island, is composed of three sections: Mdina to Rabat, Rabat to Dingli, and Dingli to Blue Grotto. Hiking the whole route is a full-day excursion that requires proper planning, including sunscreen and hiking shoes. Each section is unique. You could also break up the hike into two separate hikes — putting together the first two legs, which center on the towns of Malta, and hiking the third leg on its own.

First part: from inland to coast

Depart from Mdina and head west towards Rabat, enjoying views of the car-free side alleys of the town. It’s common to see doorsteps decorated with potted plants and little balconies in front of wooden doors. The dark browns and greens of the doors and plants contrast pleasantly against the pale limestone walls. The town ends quite suddenly, and you’ll walk along tall walls of white stones with a lot of crawlers growing tall.

The countryside rises and falls like the rest of the island, and here it’s common to see geometrically shaped fields. In spring, they’re carpeted with red or yellow flowers that are a big splash of color among the island’s otherwise muted colors. Among the big variety of wildflowers only some persist through summer, offering colored corners at every turn. A lot of the route is on road but there won’t be much traffic most days. In the distance, you’ll see the historic crosses that crown the roofs of tiny churches.

In less than an hour, you’ll arrive in Rabat, a quiet town dotted with trees and small businesses in quaint storefronts. It’s a nice view of Maltese life without the tourists. If you are only doing the first part of the hike in one day, you could briefly stop to explore some of the many historic sites in Rabat, including a Roman house or the St. Paul’s catacombs, before heading south towards Dingli.

The Rabat to Dingli section allows for more time away from major roads and occasionally puts you on unpaved stretches of dirt and road. Here, the landscape starts undulating more with slightly higher hills and steeper slopes. If you’re lucky, you’ll spot a couple of small streams covered by the branches, but the little running water available here disappears pretty quickly during summer. Nevertheless, little birds, insects, and especially lizards are a common sight. Dingli is the last town with services you’ll cross before arriving at the end of the hike.

Just outside of Dingli, the Mediterranean Sea appears behind a landscape now devoid of any tall trees. Shrubs and bushes cover the rocky ground. This stretch, which takes you in a southwesterly direction towards the southern end of Malta could take up to four hours. Despite the distance, there are many interesting spots are worth a quick visit, including Bronze Age grain silos, the Hagar Quim Temples (dated 3600-3200 BC), and the Tal-Ħamrija Coastal Tower.

Be sure to visit St. Mary Magdalene Chapel at the beginning of the path. The well-preserved, sand-colored structure is built on a fairly level rocky plane overlooking, yet set back from, the sea. The quiet place seems to beckon weary trekkers pushing through towards the finish line for a moment of quick pause and reflection.

From now on, you’re primarily on unpaved paths. The landscape abruptly ends in dramatic cliffs hung high above the sea, though the path will steer you safely around any hazards. On a breezeless day, you can hear the waves down below. An interesting deviation inland worth taking is to Our Lady of Consecration church. Set within a fertile small valley next to few squat farmhouses, this church is an open-air sacred space still visited by worshippers. The minimalistic design of grey stone has no new walls, just one historic preexisting one up front, and no roof. The backdrops all around are dark-green slopes.

The trek ends at a cluster of buildings called Triq Il-Madonna Tar-Ruzarju, a sea-level spot surrounded by sharp rocky cliffs. Here, you can rent a small boat to go around the cliffs to the east and, in a few minutes, be in the famous Blue Grotto. The Grotto is set within the jagged cliffs within a little cove, easy to miss if you aren’t paying sharp attention. Enjoy a well-earned, relaxing swim in the cove after a long day on the trail.

OutdoorThe Real Hong Kong Is a Vast and Wild Natural Wonder
Tagged
Hiking Malta
What did you think of this story?
Meh
Good
Awesome

Malta Opens To US Travelers From 38 States

5 Places You Don't Want To Miss in Malta

The Best Video of Malta You'll Ever Watch