In Italy, you expect to see plates piled high with pasta. Go out for an aperitivo in Rome, on the other hand, and you may be surprised to find a tube of bucatini poking out from your glass. Over the past few months, however, travelers have reported exactly that.

A variety of sustainable straw alternatives has hit the shelves since plastic straws became the face of the single-use-plastics problem in 2018. Paper straws are among the most common, though others are crafted out of glass, metal, grass, and hay, to name a few. Following the European Union’s 2019 vote to phase out single-use plastic utensils, straws included, another substitute started popping up in the country that perfected spaghetti: pasta straws.

The concept is simple: Take a basic egg-free pasta dough; shape it into a bucatini-like tube with wide enough openings for liquid to pass through; dry it as you would any other pasta; and then stick it in a cocktail, juice, iced coffee, or any other cold beverage, and sip. (Like most straws, they’re not recommended for hot drinks as it could result in burns.)

Though much of the early online buzz about pasta straws can be traced back to a Reddit post about bars in Italy using the edible alternative to cut back on plastic waste, pasta straws have also appeared elsewhere in Europe, parts of the United States, and around the world.

And they seem to be faring better in the court of public opinion than paper straws.

Over the summer, McDonald’s caused an uproar after admitting that the paper straws it rolled out in the UK weren’t actually recyclable, while the average straw user tends to complain about paper straws disintegrating in the drink or being flimsy, uncomfortable, or bad-tasting.

One might cite similar reservations when presented with the idea of pasta straws, which, for some, conjures up images of gummy noodles and starchy beverages.

Unlike paper straws, which have a tendency to dissolve before you’re even halfway through a drink, Stroodles claims that its straws can retain integrity for an hour or more. The straws are also advertised as flavorless, biodegradable (said to decompose overnight compared to the month it might take a paper straw), and vegan. 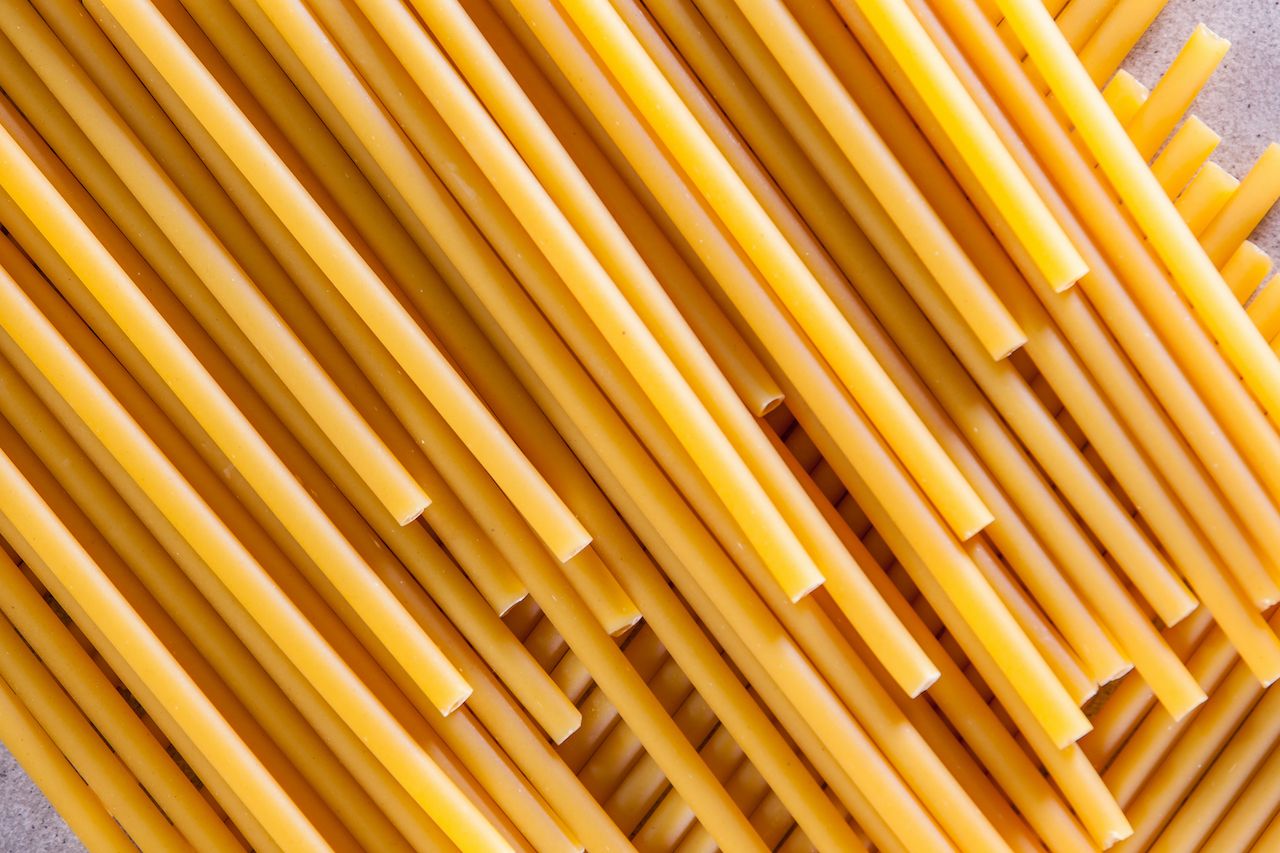 Stroodles are made by an Italian manufacturer that also produces regular pasta. These two-ingredient straws have a lower carbon footprint than items made from paper, plastic, and other materials that require a long list of items to be shipped to the factory before production starts. “It’s sustainable from an ingredient perspective because it’s just water and wheat,” Gelmann says, noting that “you can go full zero-waste either by eating the whole thing raw or cooking it up” when you’re done.

In fact, that’s a major selling point among kids, he explains, adding that mothers often have to remind their children to drink first, then nibble on the straw. Where adult beverages are concerned, the straws can double as edible garnishes in savory cocktails.

Bar owners and supermarket shoppers, or their mothers as the case may be, aren’t the only demographics that have shown interest in pasta straws, however. They’re also a hit at corporate events, where they serve as a talking point and appeal to brands interested in going greener. Currently, both Ibis and Marriott hotels are trialing Stroodles in the UK.

Though pasta straws have been well received, the war on plastic straws has been scrutinized. Some have criticized companies, notably Starbucks, for jumping on the straw-ban bandwagon while continuing to sell items like plastic to-go cups and lids. Others have questioned why straw alternatives are even necessary.

Straws may be the tip of the iceberg, representing less than one percent of all plastic waste according to Jim Leape, co-director of the Stanford Center for Ocean Solutions, but they do create a particularly insidious type of plastic waste. Because they’re small and thin, they run the risk of clogging up the machinery at recycling facilities, meaning many facilities won’t recycle them like cups and lids. Most end up in landfills where they can take up to 200 years to decompose. To eliminate straws altogether, however, would be to disservice those with disabilities or limited mobility.

Cutting down on plastic straws won’t fix the plastic-waste problem, but everything we can do to curb pollution is a step in the right direction — so long as switching to, say, pasta straws doesn’t make us morally complacent, notes Leape, but rather encourages further sustainability efforts.

As alternatives to plastic straws go, pasta is fun, affordable, and practical. Stroodles isn’t the only company making the straws, and Gelmann doesn’t claim to have come up with the idea, but it is a brand that’s walking its talk. Beyond promoting both an eco-friendly product and lifestyle, Stroodles donates imperfect straws to food banks, as well as a percentage of its sales to charities like Ocean Plastic.

At the end of the day, Gelmann wants to show consumers that it’s easy to make a small, yet meaningful, change. “It’s as easy as using a different straw,” he says, “or, you know, picking an apple that’s not wrapped in plastic.”

The stakes are low when it comes to using pasta straws but high where plastic waste is concerned. Give them a try next time you’re planning a birthday party, organizing a work function, or just stocking up for personal use. After all, even if you don’t like drinking from the pasta straws, you can at least squeeze a relatively cheap, filling meal out of them.

A tip from Gelmann if you do: “Use a thick sauce.”

Tourists Are Falling for This Scam All Over Florence, Italy
67 Types of Regional Italian Pasta You’ll Find Across the Country
Follow These Food Rules To Eat Like a Local in Italy
8 of the Most Stunning Ocean Pools Around the World
6 Spectacular Italian Train Journeys Through Olive Groves, Cinque Terre, and Venice