Many of us dream of traveling to Europe for weeks on end to admire the historical beauty and the cultural diversity present on the Old Continent. But of course, not everyone is lucky enough to make that dream come true. Whether it’s a busy schedule, lack of finances, or overwhelming responsibilities, traveling can be out of reach. Luckily, the United States, the land of immigrants, is diverse enough to provide worthy domestic alternatives. One of them is a small town in Iowa where you can get a hearty dose of Dutch culture. Pella, under an hour away from Des Moines, is the American Heartland version of Amsterdam, with Dutch-inspired architecture, cuisine, windmills, and gardens. If you’re looking for a Euro-fix, look no further than Pella — just don’t expect to find a red-light district.

The town of Pella didn’t simply adopt a Dutch aesthetic to stand out. It’s the result of early Dutch settlement, and a concerted effort by the descendants of those settlers to preserve their cultural heritage.

In 1847, immigrants from the Netherlands arrived in Marion County, IA, after fleeing religious persecution. They established a new home between the Des Moines and Skunk rivers called Pella — the name inspired by the biblical city of refuge.

The immigrants crossed the Atlantic in four ships, made their way to the Midwest by horses, wagons, and steamboat, and established Pella in the style of their homeland. Many descendants of the original settlers still reside in Pella, and proudly preserve its history through its Historical Village, shops, architecture, and annual festivals. They even speak their own dialect called Pella Dutch, which is based on South Guelderish.

Everyone knows about the Pennsylvania Dutch, but in the Midwest it’s all about the Iowa Dutch. Dutch culture courses through this city’s veins like canal water under a bridge, touching every aspect of life from food to shopping and even gardening. 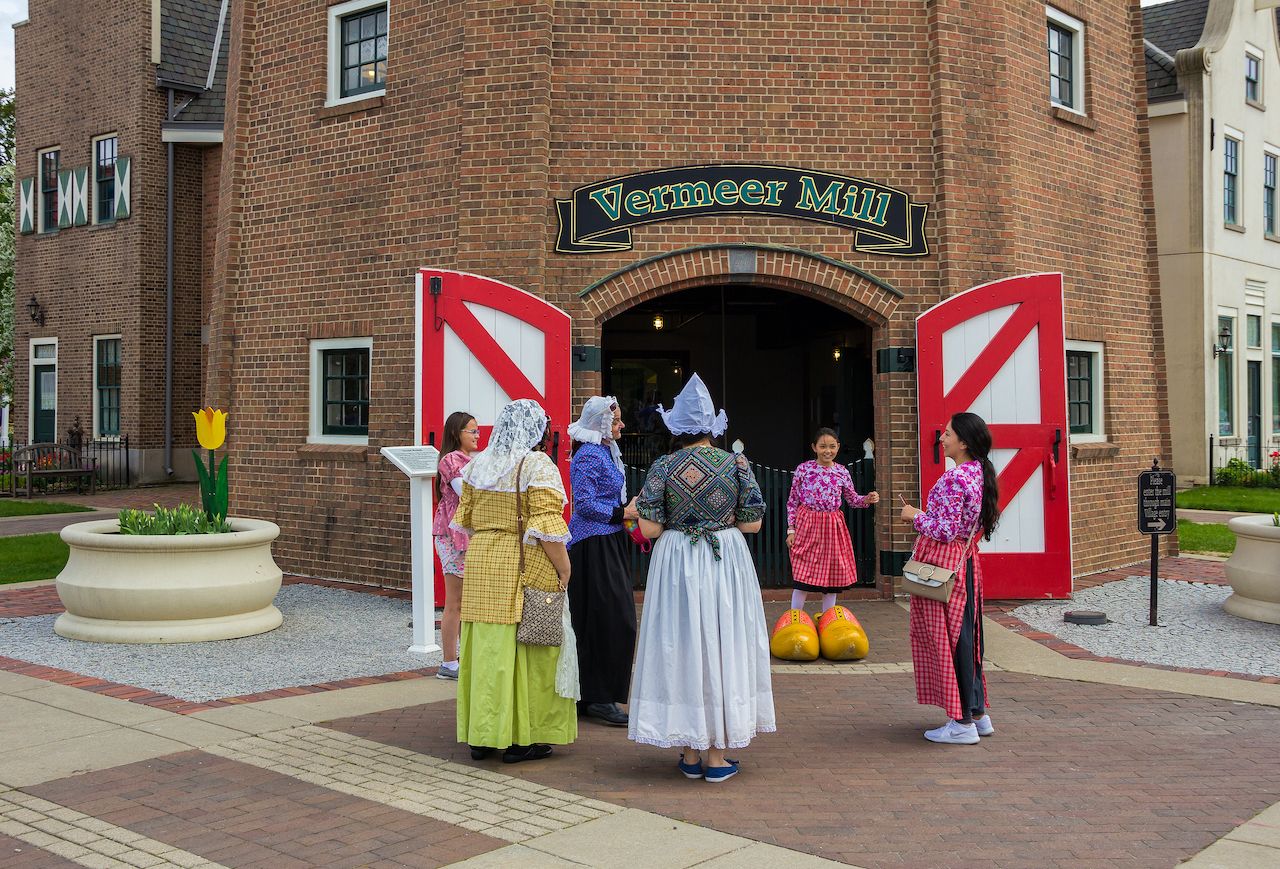 The town’s most recognizable landmark is the Vermeer Windmill, which is the tallest working grain windmill in the US. Designed in Hoogmade, Netherlands, the mill was shipped to Iowa in 2002, and you can take a guided tour of the mill and learn what makes windmills so integral to life in the Netherlands. The best view of the town is from the windmill’s observation deck, where you can look down on the rest of the Historical Village.

In addition to the windmill, the Historical Village is composed of 21 buildings, including a blacksmith, clog cobbler shop, puppet theater, church, bakery, and the childhood home of Wyatt Earp. The village gives visitors a window into Pella’s history since the 1840s, offering a unique perspective on life in a Dutch immigrant town in the Midwest. 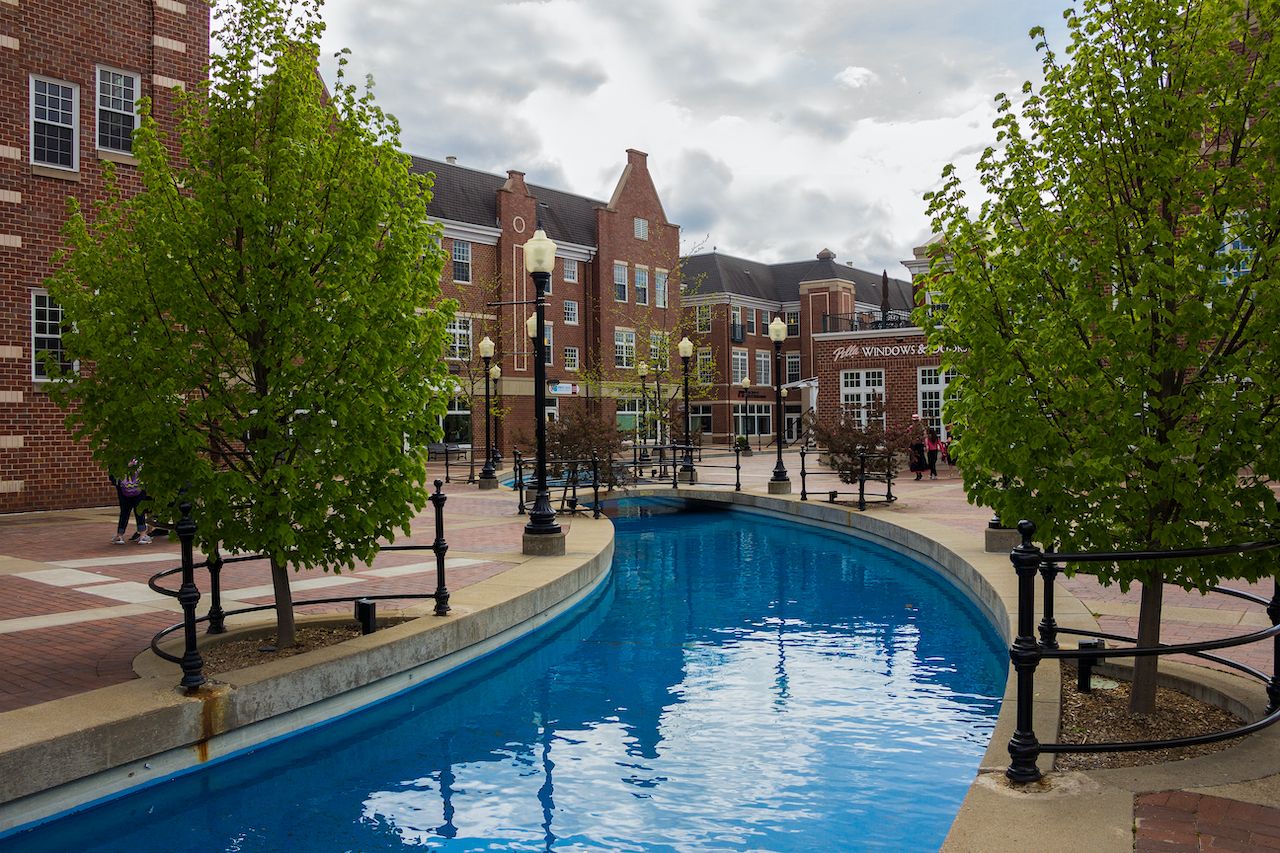 Crossing into modern-day Pella, you’ll still find yourself immersed in the Dutch aesthetic. Many storefronts, businesses, and facade decorations are inspired by Dutch design, and statues portray important pieces of the town’s history. At the center of it all is Molengracht Plaza, a replica of an authentic Dutch square, complete with a canal and an Amsterdam-like promenade. 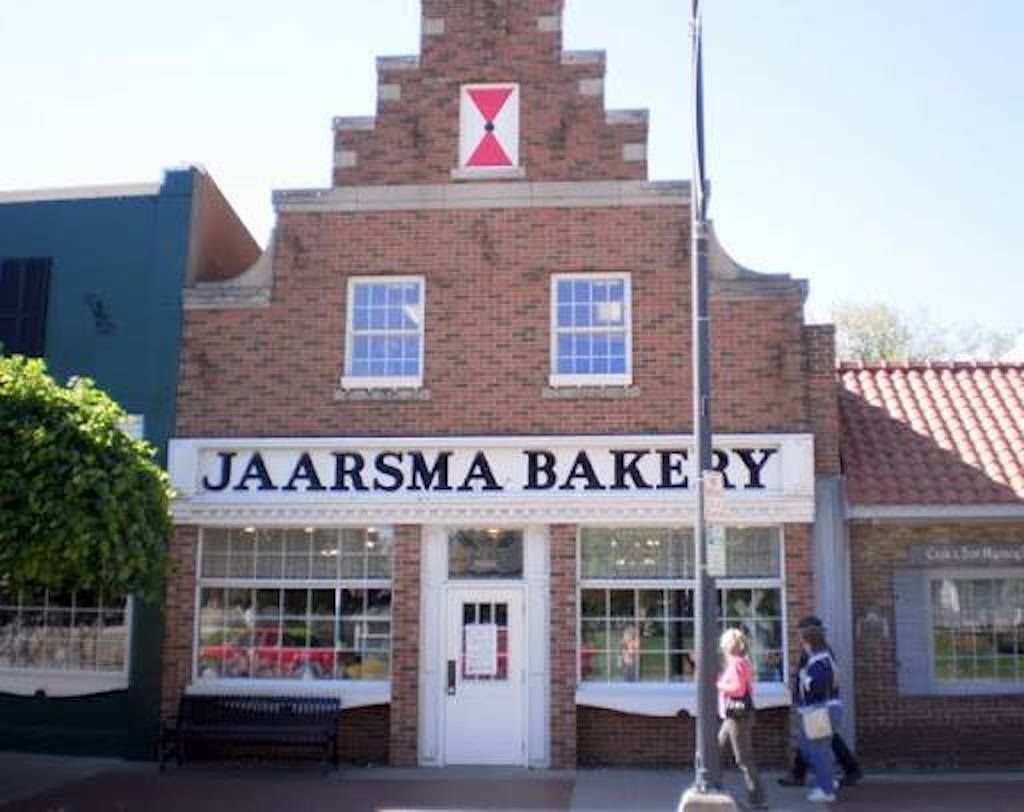 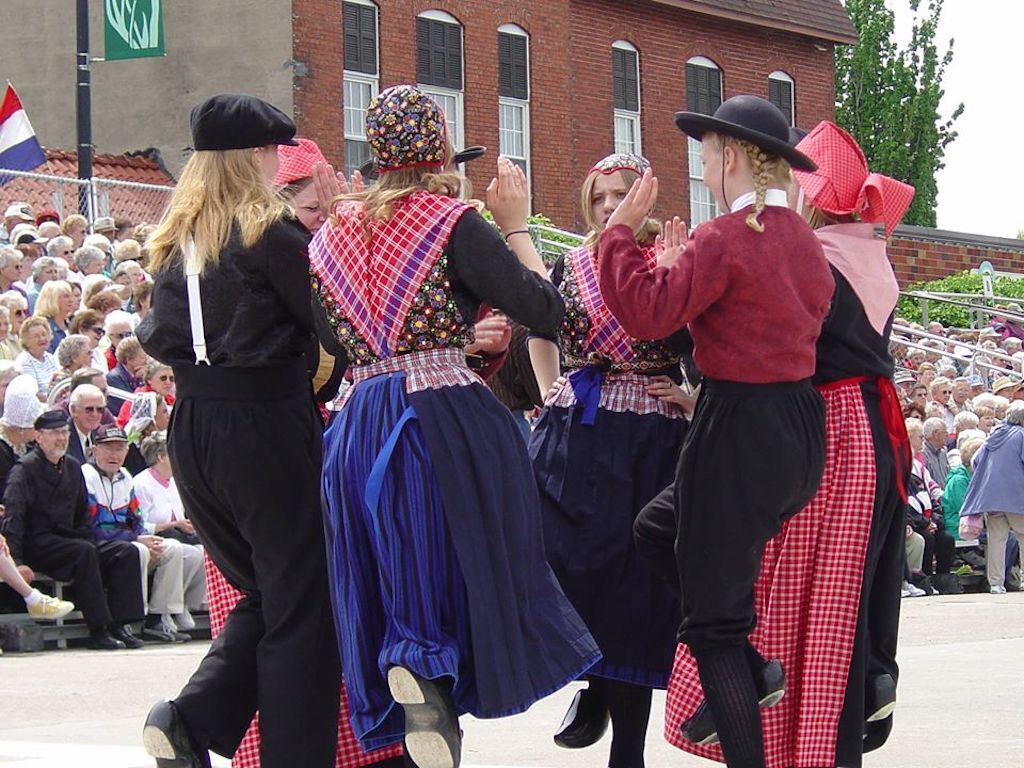 Pella’s signature event is the annual Tulip Time festival. Taking place every year at the beginning of May, the festival features parades, food, traditional Dutch outfits, and concerts. During this week of Dutch pride, the town hosts tours of the Historical Village and the various museums, offers Dutch musical performances at the local theater, sets up stands with authentic Dutch food, and even hosts a 5K run.

Perhaps most highly anticipated is the Volks Parade, featuring Dutch-inspired floats, costumed marchers, bands, and other attractions. There’s a parade in the early afternoon and a second one at night, with illuminated floats and followed by fireworks. The parades are accompanied by Dutch dancing and singing performances, a costume show, cheese market demonstration, and, of course, the crowning of the Tulip Queen and her court. 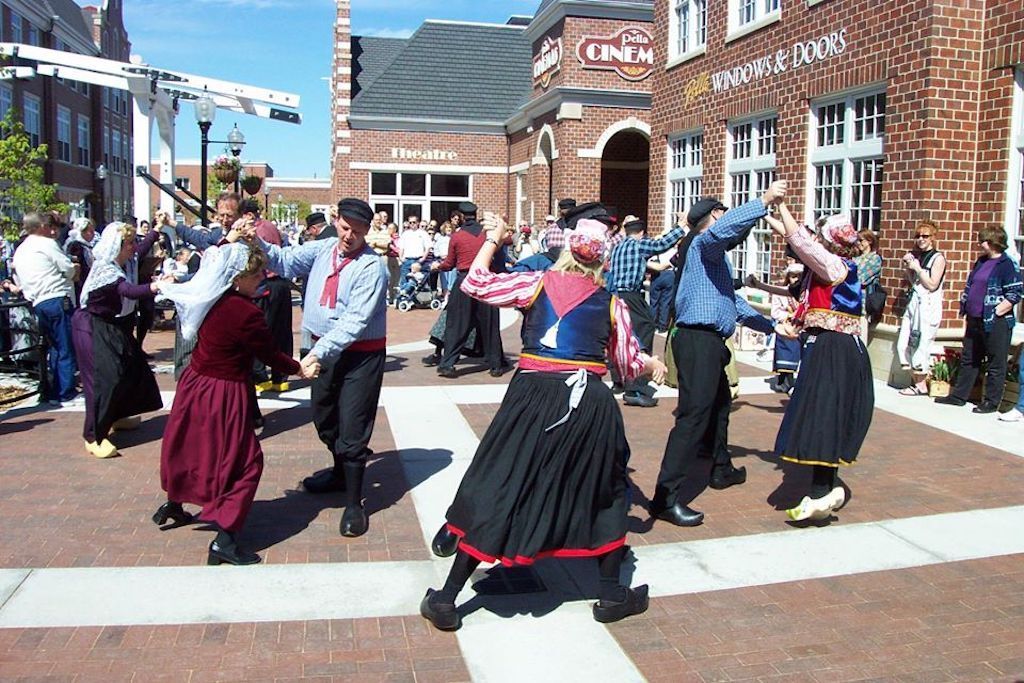 The weeklong festivities wrap up with a Sunday morning Thanksgiving and Praise Service at the Vermeer Global Pavilion.

Tulip gardens and beyond

It wouldn’t really be a Dutch town without a disproportionate number of tulips. Between Central Park and Sunken Gardens, the city plants hundreds of thousands of tulips each year to celebrate its Dutch heritage. Particularly striking is Tulip Avenue in Central Park, running from the northern fountain to the center of the park with a variety of colorful tulips lining the sidewalk. 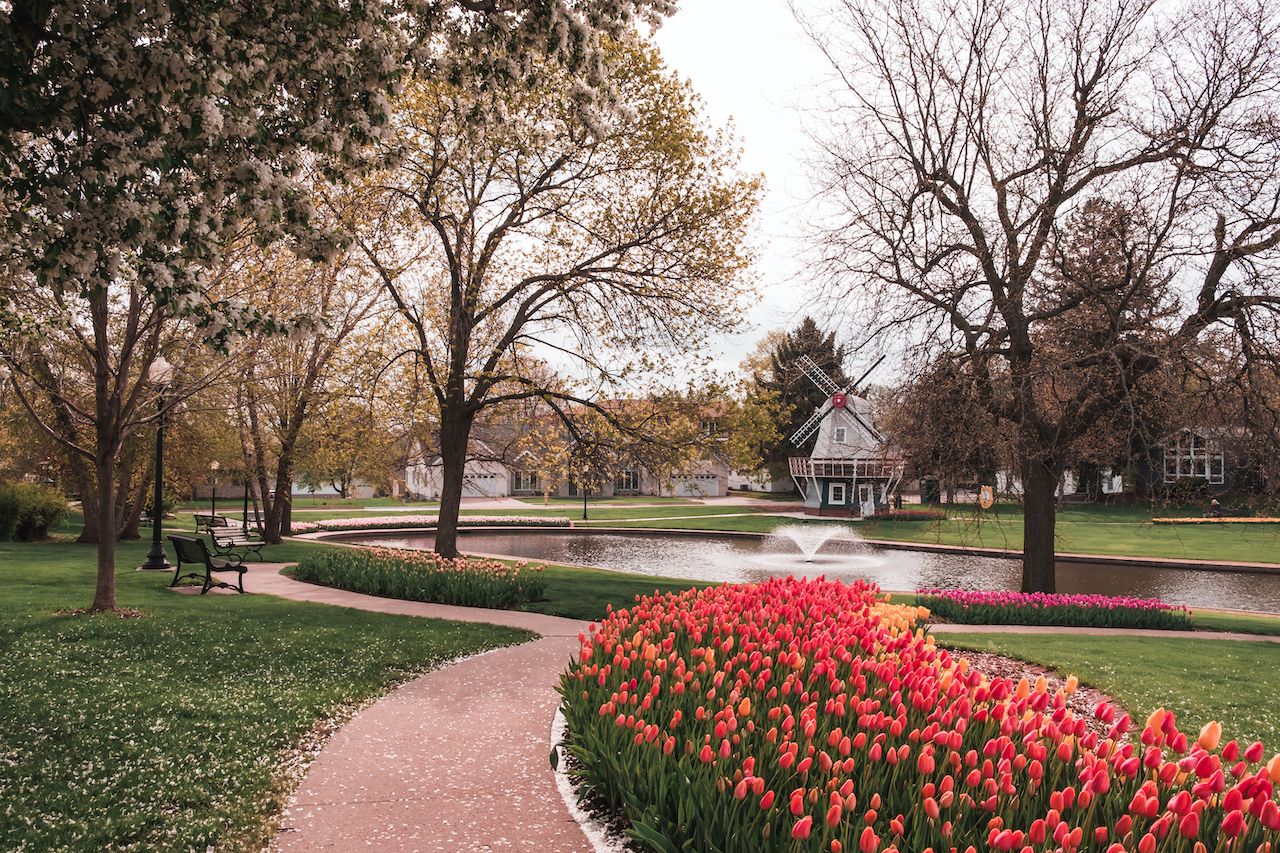 Fair Haven Memorial Garden is also home to thousands of tulips. This garden was originally planted in 1947 after the Netherlands donated bulbs to the town as a gesture of gratitude for aid in World War II. These 17 flower beds, located just a few blocks from downtown, currently feature around 13,000 tulips.

Just because you’re visiting Pella doesn’t mean you have to sign a social contract promising to only partake in Dutch activities. When locals want to enjoy the outdoors, they don’t roll around in the Sunken Gardens’ tulip beds — they go to Lake Red Rock. Iowa’s largest lake, Lake Red Rock is just 10 minutes from Pella, and has an abundance of outdoor adventure on its 35,000 acres of land. In addition to several campsites, the lake also has a 13-mile hiking and biking trail, picnic areas, and shoreline fishing. In the spring and fall you can spot white pelicans migrating through the area, and in the winter you might be treated to a bald eagle sighting.

CultureWhy Grinnell, Iowa, Is the Most Badass Town in the Midwest
Tagged
Culture
What did you think of this story?
Meh
Good
Awesome