The restaurant world is caught in a difficult contradiction.

On the one hand, the restaurant-going public is getting a little weary of places where a lunch of chicken salad and Diet Coke somehow comes out to $45.

On the other hand, restaurants are finding it impossible to retain kitchen staff, who in many cities make between $10-$15 an hour, working 12-14 hour days.

Customers don’t want to pay more, so restaurants can’t pay their chefs more, which is a big reason why nearly two-thirds of new restaurants fail within the first three years. It’s a vicious cycle.

But one Florida startup is trying to make things better for both the customers and the chefs. Chefit, founded by cousins Matt Redler and Sabrina Beraja, is bringing people restaurant-quality food from well-trained chefs at almost half the price — all while giving chefs double what they’d make in a traditional restaurant kitchen.

“There are a lot of chefs stuck in restaurants doing high quality work for almost minimum wage,” Redler says. “And they can’t move into being personal chefs because they don’t have the finances or the network. This gives them the chance to start a micro-traveling restaurant by plugging into Chefit.”

The concept is simple: You, the diner, log on to Chefit and peruse its roster of personal chefs. Each one has a specialty cuisine listed in their bio. You check out the menu, find one you like, and book a date for them to come over to your house and cook.

You order family style — one dish serves about two people — online, and then about an hour before dinner, the chef shows up and does their thing. Meanwhile, you relax in the living room, entertain your friends, and wait for food to be served. You drink your own drinks, pour your own wine, and end the night with a bill of about half what it would have been in a restaurant.

Seems like a nice concept, but does it work in practice? Chefit sent a chef over for dinner for a few of my friends so we could find out.

A night in and a night out, all at the same time 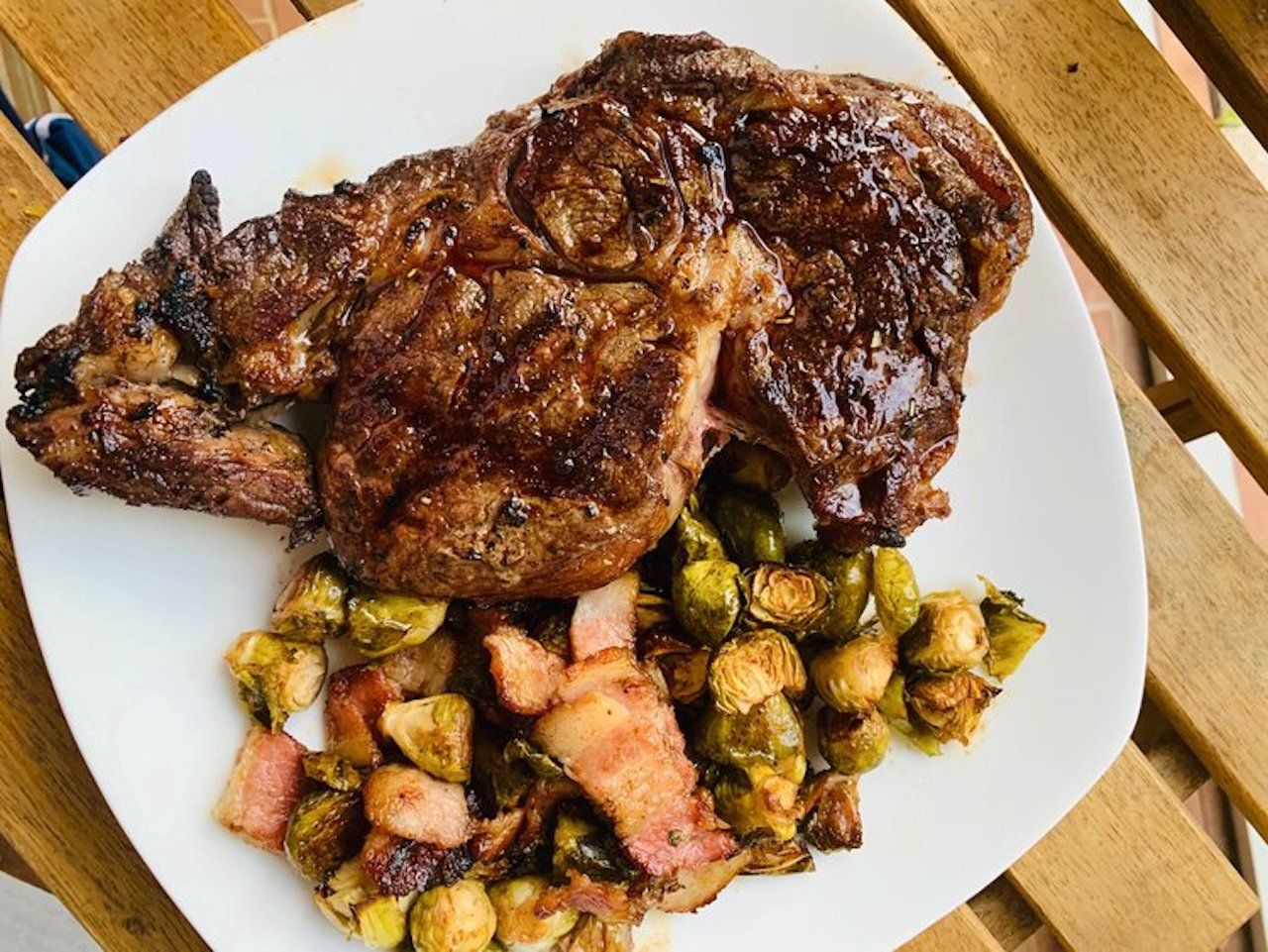 If you’ve ever gone out to dinner in a family-style restaurant, you know getting four people to agree on what to order is only slightly easier than herding cats. Continental trade agreements have taken less negotiation, and when it’s done over group chat instead of at a table, it can literally take weeks.

This, fortunately, is the only hassle in the entire process. But if you appoint one person to gather everyone’s preferences and order what’s most popular, you can avoid pretty much any aggravation.

Our group ordered from a chef named Erick, who arrived at my friend’s swanky South Beach apartment a prompt 60 minutes before our designated mealtime. While he chopped, seasoned, and sprinkled, the rest of us caught up over beer and cocktails in the living room. Like a proper cocktail hour before dinner, except we weren’t out $80 before we sat at the table.

After an hour or so of lounging, Chef Erick came out to the living room and announced that dinner was served. We adjourned to the dining room to find a beautifully plated tomato bruschetta set in the center of the table, with four places around it complete with wine glasses.

I opened a riesling I’d recently gotten on a trip to Niagara Falls wine country to pair with the first course. Again, no corkage fee, no additional cost.

The bruschetta was ripe with fresh tomatoes and spicy basil, with shaved parmesan on top. A block away at Il Mulino, this probably would have cost us $25. 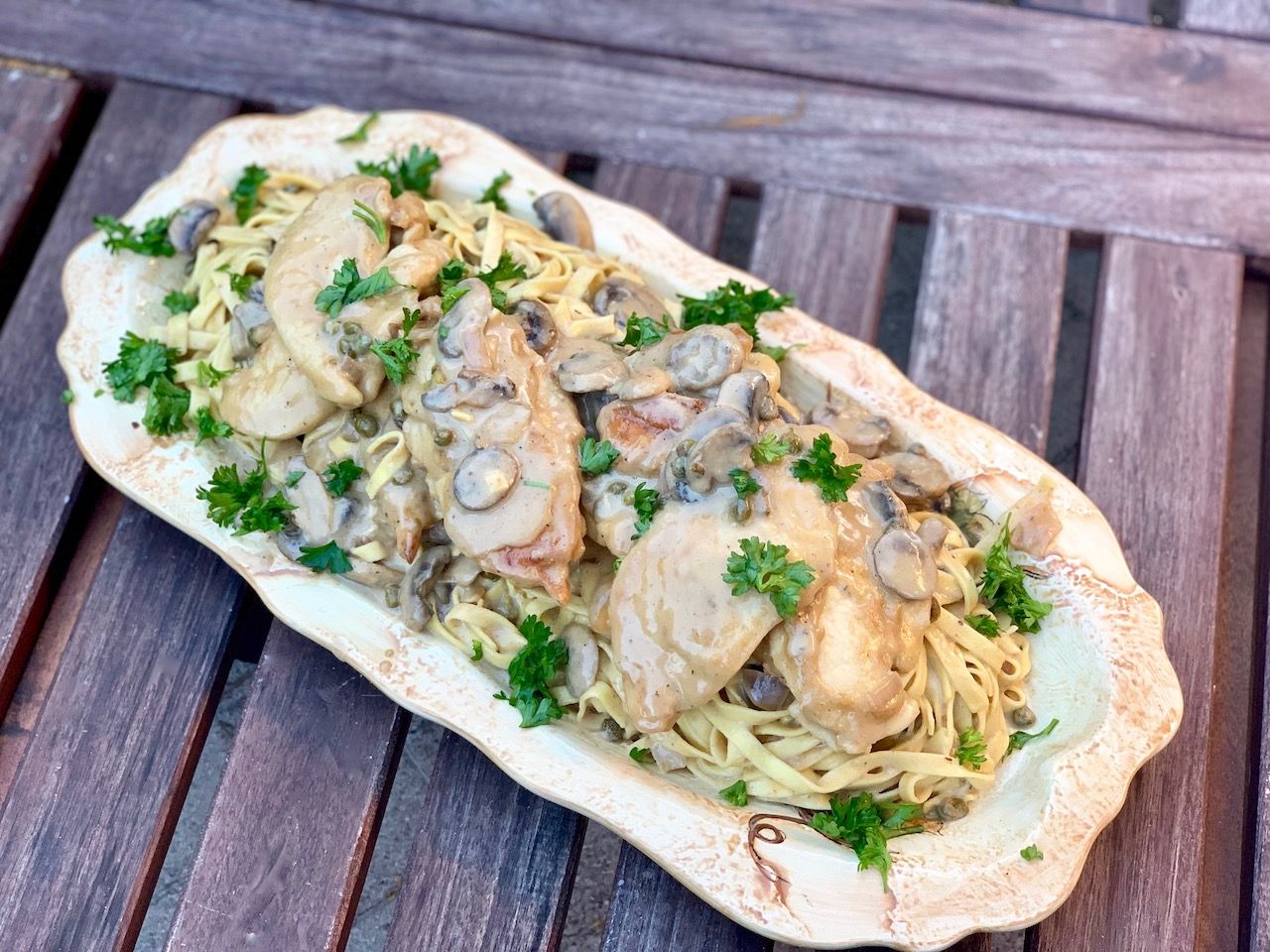 The next course was a chicken marsala that held up to any I’d had in Miami. It was served alongside prime beef burgers with a crispy outside and juicy middle, prepared in a pan on the stove. The chefs bring some of their own equipment, but like most personal chefs, they’re able to adapt their menus to whatever space you have.

My friend hosting the dinner opened a bottle of wine he’d brought back from Slovakia, which we couldn’t have found in a restaurant if we’d tried.

Chef Erick prepared dessert while we laughed over our marsala, nearly two bottles of wine deep between four of us. He cleared the table, reset the dishes, then brought out individual apple pies a la mode to finish. There was no lag between courses, and no dishes to clear or wash.

In the confines of my friend’s apartment, this meal for four cost us all of $120 before gratuity. Add in a 25 percent tip to the chef, and that goes up to $150. In Miami, as in many big cities, you’d consider that reasonable for two people. For four people, you’re not finding that price anywhere not called Cracker Barrel.

Chefs benefit along with the guests 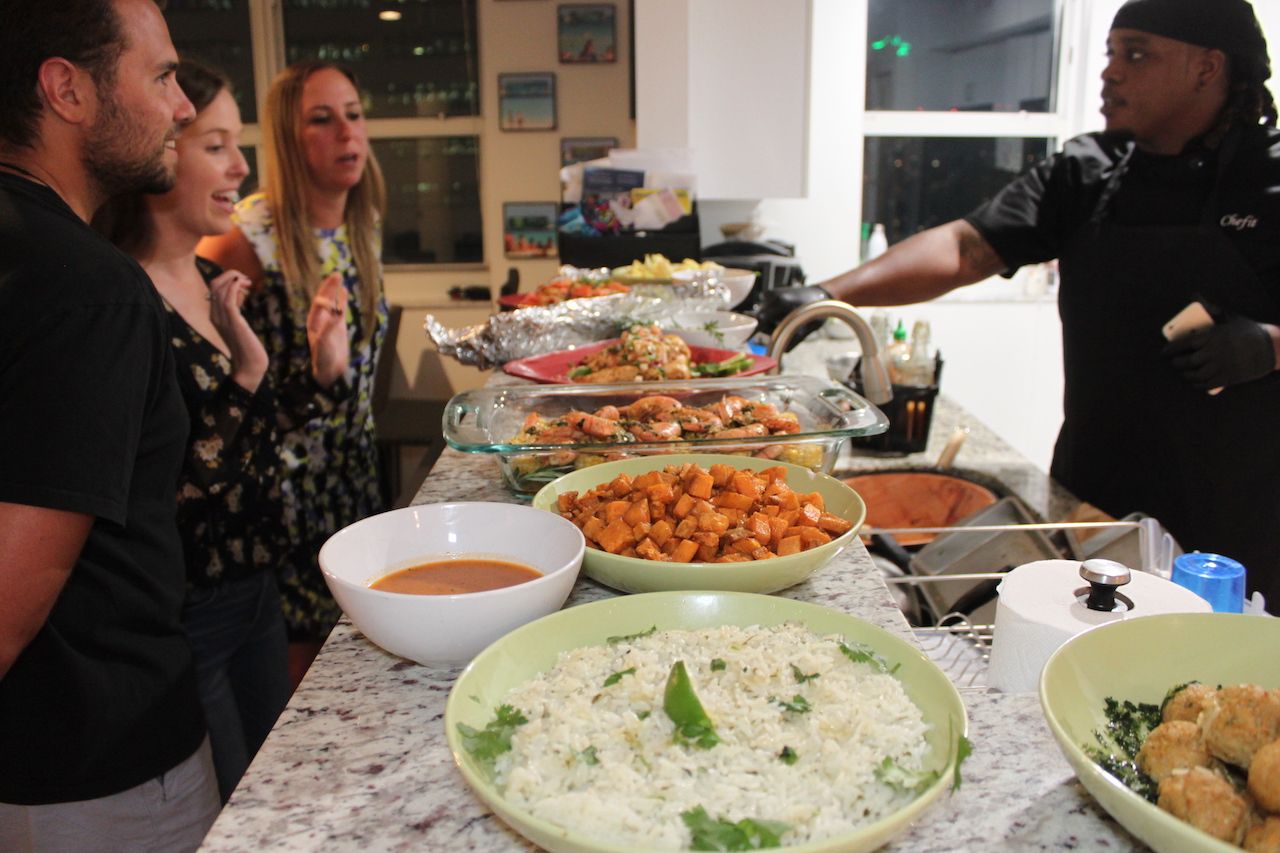 Chef Erick was in the apartment maybe three hours total. Chefit, according to Redler, takes a 15 percent cut of the bill, meaning the chef made about $125 in three hours after gratuity. Subtract the cost of ingredients, and that came out to around $30 an hour. Which seemed a little low, until I learned more about the restaurant industry.

Even executive chefs at most restaurants in Miami don’t make much over $65,000 a year. The average salary at the time of writing for an executive chef, according to Glassdoor, is $63,819. When you break that down by the long difficult hours, it’s barely $15 an hour.

“The reason I never took cooking seriously was because I hated the restaurant industry,” said Daniel Gomez, a chef who uses Chefit. “Getting bossed around, yelling, being sweaty and nasty for like no money. But if I can book a dinner a day I’ll make more than I would in a restaurant.”

Gomez specializes in barbecue, cooking for anywhere from two to 13 people via Chefit, meaning he could make triple what our chef-for-four made. He says he enjoys the personal aspect of it, having the ability to interact with guests and give their food special attention.

“When you’re in a restaurant, they’re cooking 100 steaks, and it’s hard to give yours personal attention,” he said. “When I’m cooking for someone in their home, I’m perfecting every part of the meal.”

Programs like Chefit can work better for aspiring personal chefs than striking out on their own because there’s no networking to be done. And, according to Redler, the chef doesn’t have to pay for job leads like they do with other services. Chefit only makes money when a chef gets paid.

“They treat their chefs very well,” said Gomez, who also works as a Keto coach, among other things. “I’m making more per dinner, and it lets me focus on things that are important to me.”

The concept also lets those of us who can’t afford Fendi rugs live like we can. Because if you can afford dinner in a mid-range restaurant, Chefit is totally within your price range.

“People are so excited to have a personal chef in their house,” Gomez said of his guests’ reactions. “To have someone come into your house, and cook for you, and entertain your party, it makes you look cool. People are gonna be jealous when you post that, like, ‘Where’d you get a personal chef?’”

For now, the program is limited to South Florida, but Redler says his eyes are on nationwide expansion.

As one who eats in restaurants more than I should, this seems like an ideal way to start a night out. There’s no stressing about making a reservation, no debating what to order, and nobody getting mad when one person orders six martinis and drives up an evenly split bill.

For our part, we used the dinner as the perfect pregame and hit a club a couple of miles away afterward to end the night. But if you wanted to finish your big Saturday night by going into a food coma on your couch, well, there’s no need to find an Uber either.

Restaurants + BarsWhere To Eat in Miami, According To Miami’s Best Chefs
Tagged
Food + Drink Technology + Gear
What did you think of this story?
Meh
Good
Awesome