While so much of the travel experience is sliced up and targeted to specific market segments, air travel generally isn’t. Accommodations can range from hostels and mid-range Airbnbs to boutique inns and five-star hotels. But when it comes to booking international flights, the options have been to either to save money in coach class or spend it like there’s no tomorrow at the front of the aircraft.

OK, not everyone seated in business class — where a round-trip San Francisco to London booking can cost up to 12 times more than a seat in a coach — has money to burn. (The money-to-burn folks are in first class, anyway.) Plenty of biz-class passengers are executives whose companies are footing the bill, while others have used frequent traveler miles to upgrade their way into that cabin. But the differential in price and service between economy and business is a veritable chasm.

There is, however, another option. If your company isn’t paying the fare and you don’t have the airline status for an upgrade, but you are willing to pay a bit more to avoid a soul-crushing check-in line or a knee-crushing coach seat, there’s an emerging class of service for you — and it’s appearing on more and more long-haul routes and airlines: premium economy. 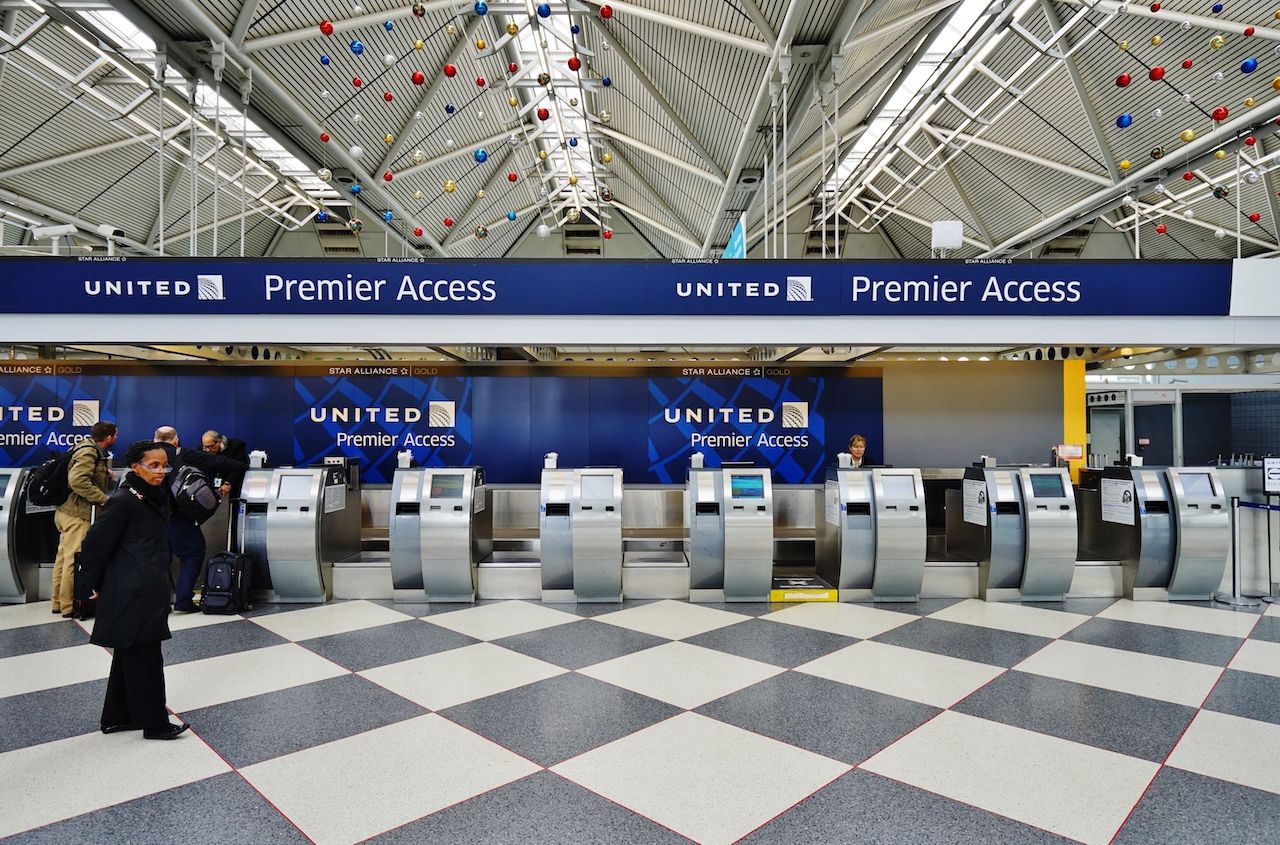 Premium economy, as the name suggests, is closer to coach than business. There’s no Champagne before take-off or lie-flat beds (or anything close to lie-flat), but you will get a more streamlined check-in experience, an amenities kit, and a bit more space to stretch out. You’ll also get a smaller cabin with more attentive service and, on some airlines, better food and free drinks.

Depending on the route, airline, and time of year, premium economy costs between two and three times more than a regular economy ticket. While well below business fares, it’s still a hefty cost difference, which is why some airlines tout is as an option when traveling for a special occasion, such as a birthday or honeymoon.

At least that’s how United Airlines has promoted its recently inaugurated Premium Plus service, which kicked off in March of this year.

Flying on United Airlines’ Premium Plus 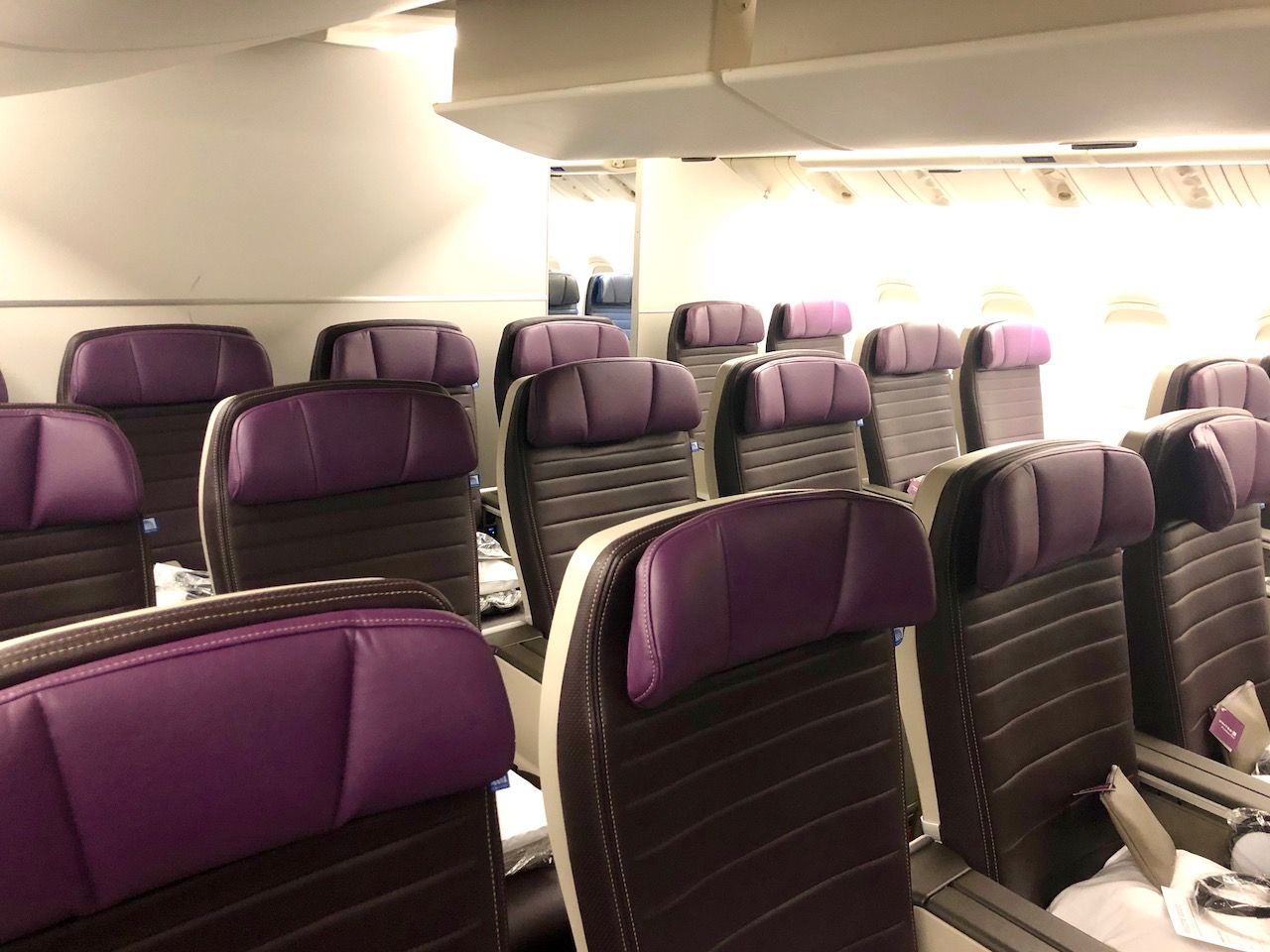 Last month, I was celebrating neither a birthday nor a honeymoon, but I did get to fly on United’s Premium Plus service from San Francisco to Auckland, New Zealand. Even coach flights to New Zealand aren’t cheap, coming in between $1,200 and $1,700 round-trip, and Premium Plus tickets tend to be a little more than double that.

The Premium Plus cabin was separated from the economy cabin in color (purple versus blue), location (sandwiched between business and economy), and seat style (two inches wider at 19 inches, with a tad more recline). We had three rows of seats in a two-four-two configuration, so the cabin fit just 24 passengers.

We were far fewer than 24 travelers, though, and I had the window and aisle to myself. A silver-haired couple from San Luis Obispo, California, were seated in the middle and had the four seats to themselves. They’d booked it for their return to New Zealand after honeymooning there many years earlier.

“This is a strange world. It’s not quite coach,” said Susan Andros. When she and her husband first traveled to New Zealand, Susan said they had flown in economy class. Thirty-eight years later, they wanted a bit of an upgrade. “This feel like domestic first class,” said Susan.

What you get in premium economy 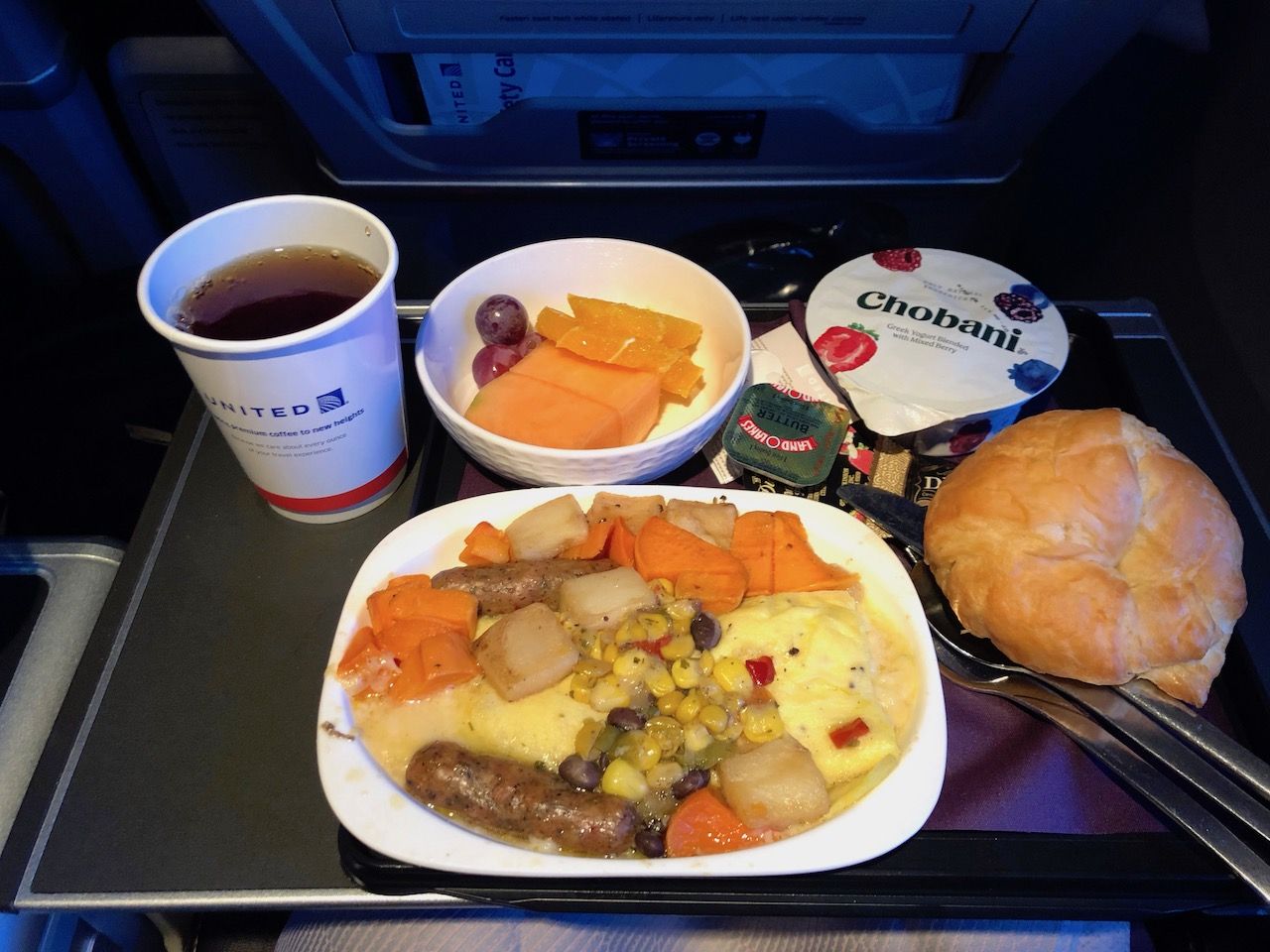 Specifically, United defines its international Premium Plus offerings as added convenience (with Premier check-in access and guaranteed overhead bin space), more spacious seating, upgraded dining service (with free alcoholic beverages and dinner served on nicer dinnerware with cloth napkins), and improved entertainment (with bigger screens and noise-reducing headphones). Add to that plush pillows, blankets, and an amenity kit, and it is certainly a cut above.

I really appreciated the smaller cabin size, the more attentive service, and meals that felt more special. The only disappointment was in the seats themselves; they were pretty firm, and the six inches of recline was less than I’d hoped. Since, as in business class, the tray table tucks into the armrest, you can’t raise said armrest — so I couldn’t take advantage of having the two seats by myself to stretch out.

Comparisons across the Pacific 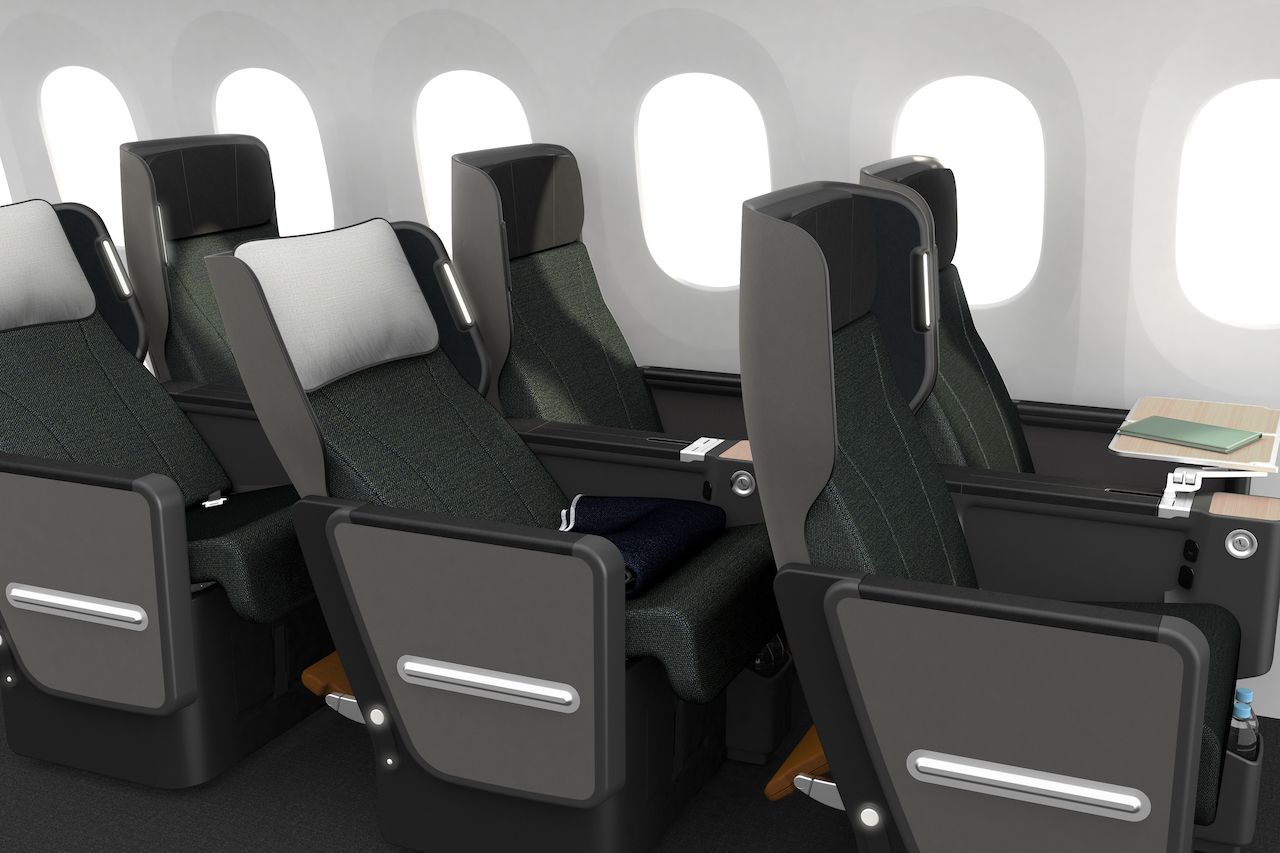 United’s service is pretty similar to that of other US carriers, but it stacks up a little differently from carriers serving the Oceania route. On that same SFO-Auckland routing, Air New Zealand’s premium economy cabins is one of the best anywhere. You’ll likely pay an additional two hundred dollars more round trip than on United, but the food is served from those elegant business-class carts, and the seats are really comfortable. Although they’re about the same 19-inch width, they’re padded, offer nearly three more inches of recline, and have a more usable footrest. It’s just enough to allow for better sleep.

Also servicing routes across the Pacific Ocean, Qantas was early into the premier economy game and does it well. Although the plush seats are just 19.5 inches wide, there’s far more space between seats. Price-wise, though, Qantas’s premium economy is more expensive relative to economy — running at nearly three times the cost.

All of the cabins feel more private, but the placing of the restroom relative to the premium economy cabin depends on the aircraft. Technically, premium economy customers are supposed to use the economy restroom — and it can sometimes feel far away. American’s gray color scheme is somewhat drab, but the seats have slightly more cushion. Delta’s seats give you more inches of recline, and the TUMI amenity bags are a nice touch.

Comps across the Atlantic 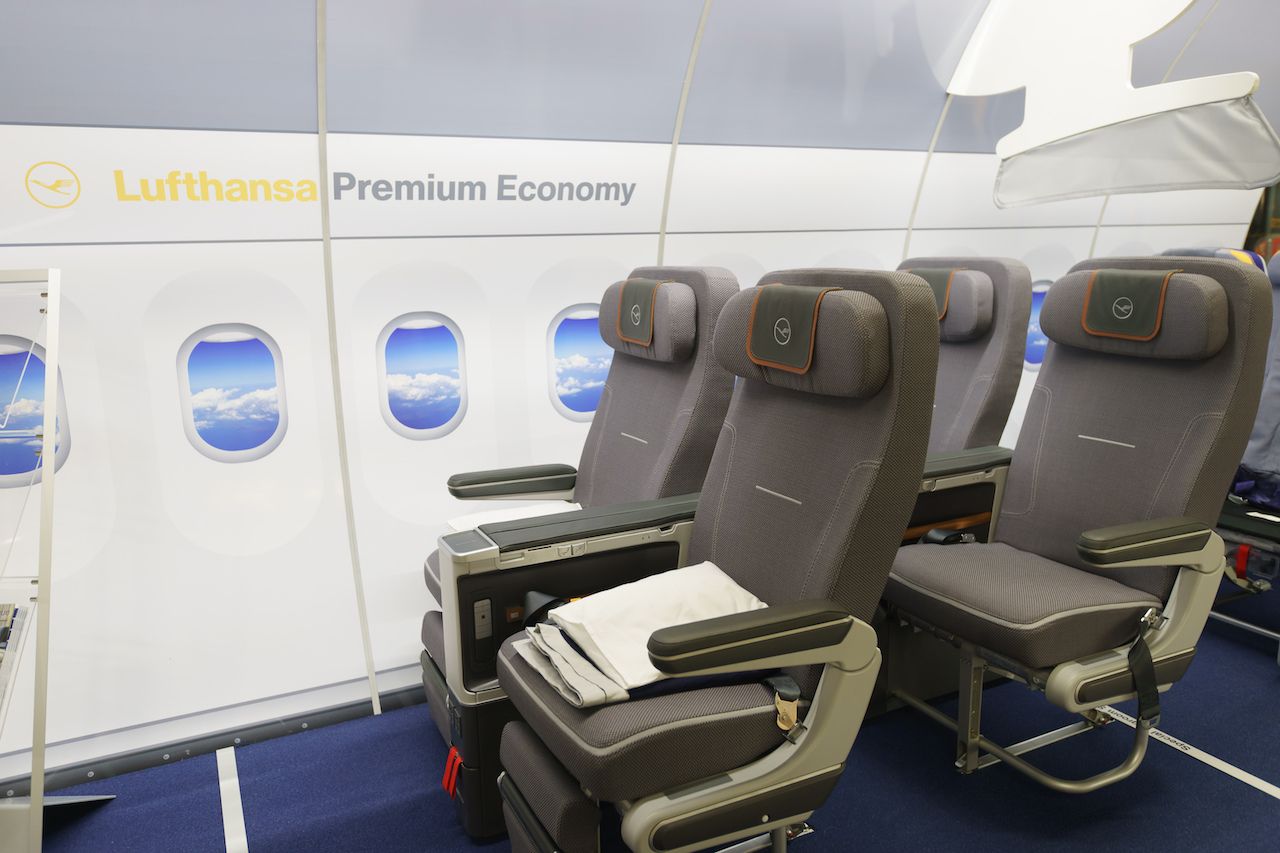 British Airways World Traveller Plus, which I’ve taken a few times, has seats similar in width to UA’s, but the service is more attentive. Particularly appealing is the table-clothed cart that’s set up with fruit and snack baskets for noshing in between meals. Another big difference is the seat recline, which is substantial. This can be problematic if you need to work on your laptop while your forward neighbor dozes; you’ll fear crunching your computer. But if your goal is sleep, you’ll really notice and appreciate the difference.

Lufthansa has very comfortable seats, good food, and excellent service. Air France’s premium economy also gets high marks for service, including check-in at the business-class counter, but the firm seats that hardly recline are a major let-down. Reviewers wonder if the Air France designers actually tried to sleep in them.

Is it worth it? 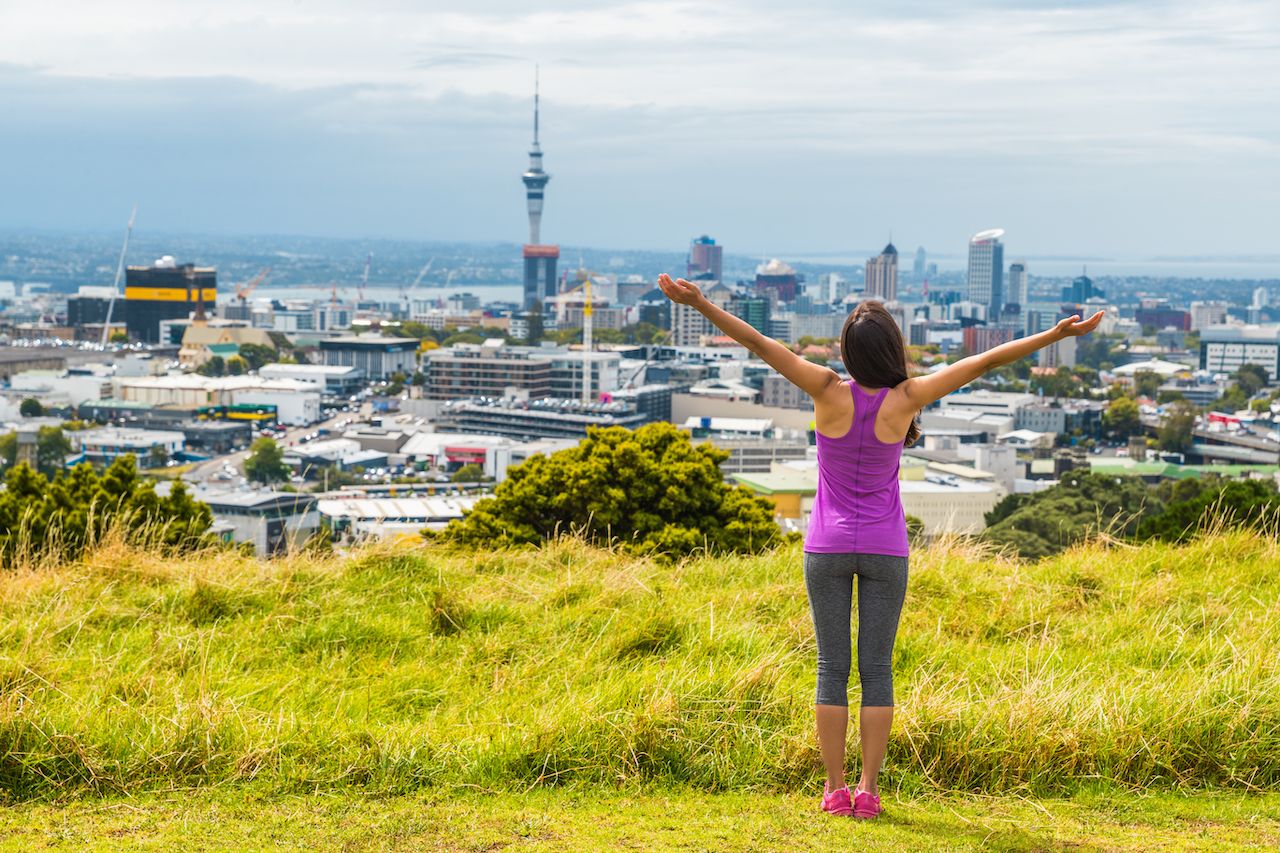 Depending on your budget and your priorities, premium economy service is worth considering. On some airlines, you could try to use miles to get into this cabin. For now, that’s a non-starter on United — where you need almost as many miles for Premium Plus as for business. A one-way ticket on United from San Francisco to Auckland was 40K miles for an economy seat, a whopping 170K for Premium Plus, and 200K miles for business.

After all, those flights arrive early in the morning. Chances are you can’t check into your hotel or Airbnb at 8:00 AM, so you’ll have to just start exploring. If you’ve spent a sleepless night in coach, you may not be ready to head up Auckland’s Sky Tower for sweeping views of this waterfront city or go out for a sail in an America’s Cup boat.

I was, in fact, able to do those lovely things as soon as we landed in Auckland with a reasonable amount of energy, because I had gotten some sleep — even if the seats could have been more comfortable. The cabin was quiet, and the extra space did allow for a few hours of shuteye.

Susan Andros, the passenger returning to New Zealand after 38 years, was quite satisfied with United’s Premium Plus. She said it was very comfortable. The extra sleep meant that on arrival in New Zealand, she and her husband could “hit the ground running.”

When time is money, not losing a day of your vacation to exhaustion caused by lack of sleep is worth something. For some, it’s priceless. For others, it may be just enough to justify that premium-economy price tag.

WellnessHow To Use the Science of Routine To Beat Jet Lag
Tagged
Airports + Flying Budget Travel
What did you think of this story?
Meh
Good
Awesome

This Southwest Airlines Passenger Has a Hilarious Way To Keep the Seats Next To Him Open
A Flight Attendant Shared Ridiculous Passenger Requests and It’s Hard To Believe These Are Real
A Former Flight Attendant Explains the One Seat She’ll Never Book (It’s Not the Middle)
Southwest Passenger Creates a Fake Person To Keep Anyone From Sitting Next To Him
Newark Airport Is Officially No Longer an NYC Airport. Here’s How That Impacts Your Flights.

People Are Stowing Carry-On Bags All Wrong, According To United Airlines