It’s not only horses who can tear it up at the racetrack and be sold for millions. This star racing pigeon named Armando from Belgium sold for $1.4 million in an auction over the weekend, and according to PIPA, the group organizing the sale, he might be “the best long distance pigeon of all time.” 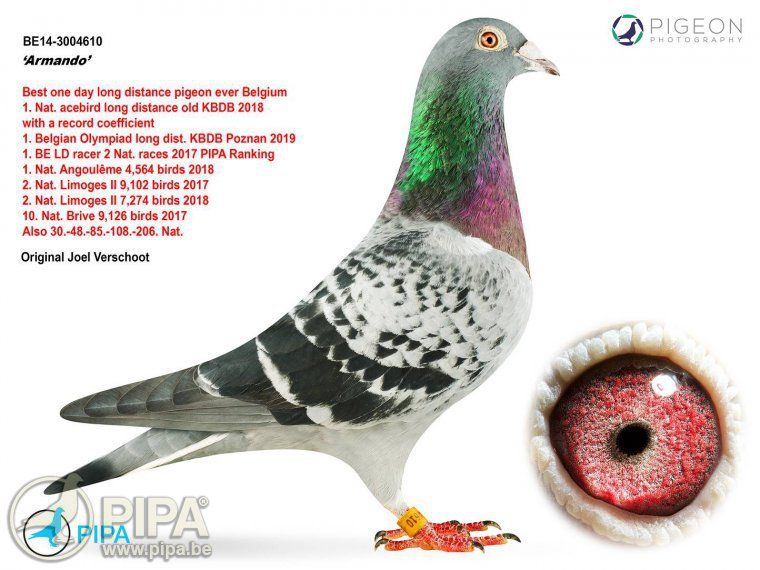 As a racer with an impressive prize list, there was no question that Armando would fetch a sizeable sum at auction, but nobody was expecting such numbers.

After fierce bidding war, a buyer from China forked over $1.4 million and took Armando home. PIPA noted that the result wasn’t exactly a surprise; in 2017, Joël Verschoot, Armando’s seller, had already broken a record by selling a pigeon named Nadine to Xing Wei, a Chinese property tycoon, for almost $455,000, according to The Guardian.

The pigeon industry is more competitive than many may think. PIPA said the auction “marked the start of an exciting two-week bidding race that involved many international names,” and that the $1.4 million bid makes Armando the most expensive bird ever to be sold in auction. Joël Verschoot, his seller, also sold 178 other pigeons in the auction, for a total of about $2.7 million.

Although pigeons are often dismissed as “dirty birds” because of their ubiquitous presence in cities around the world, they are incredibly fast flyers with a sense of direction humans can only dream of, hence the popularity of pigeon racing in China. Pigeons, besides being amazing racers, were also used during WWII as spies for the resistance against nazis. Pretty good for what some call “sky rats.”

WildlifeMillennials Are Super Into Birding Now. Here Are the Best Places To Go Birding Around the World.
Tagged
News
What did you think of this story?
Meh
Good
Awesome