“I was watching them and pacing up and down the beach on my phone, talking to [my husband] Dan and saying, ‘I’m never doing this again,’” says Caitlin Pardo de Zela of watching her teenage daughter Georgia Lockwood surfing out in heavy, 10-foot waves with a coach, a former big wave surfer. She told her spouse, “‘You need to bring her. This is way too much.’”

Pardo de Zela is a surfer herself, so she understands the power of San Francisco’s Ocean Beach waves. But when, at the age of 13, Georgia said she wanted to take her recreational surfing to a competitive level, Caitlin and Dan decided to support their daughter.

Given the very real possibility of serious injury, assisting your child’s foray into extreme outdoor sports isn’t always easy. But there are ways to mitigate the risks and, for some, the advantages of participation are worth it.

Challenges that build confidence and community 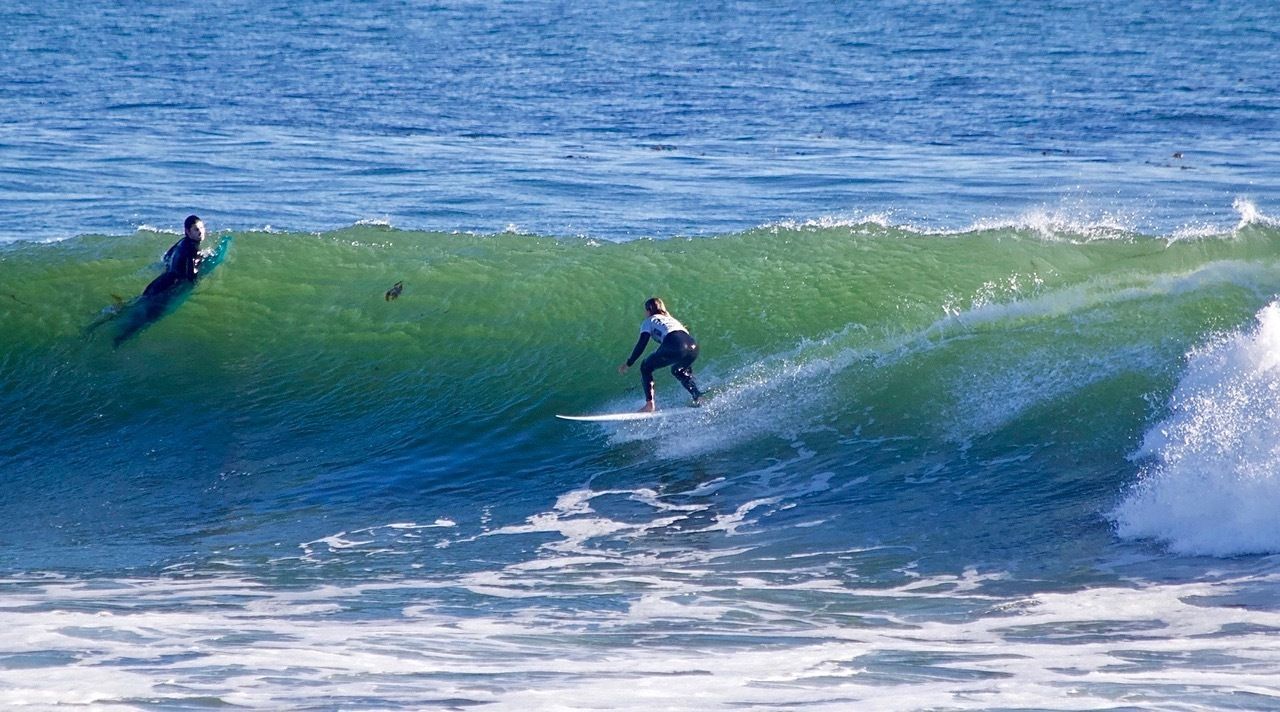 Dr. Taylor points to the “empowerment and stimulation of participating in extreme outdoor sports” where kids can learn to push limits, overcome fear and doubt, and get out of their comfort zone.

Pardo de Zela sees those boons for her daughter Georgia, now 17. While she says that Georgia has always been self-assured, surfing at a competitive level has “absolutely been positive for her in terms of overall confidence. Just knowing that you can set a goal and, if you push yourself, stick with it. And, if you’re persistent, you’re going to achieve it. I think it’s been great for her overall.”

Outdoor sports are also an excellent way for your child to build community. While the San Francisco high school Georgia attends doesn’t have a surf team, she found one at a high school in nearby Marin County.

“She was able to join their team and loved it,” says Pardo de Zela. “That was great for her, to be doing it with other teenagers that were as into it as she was.” Georgia now spends her free time on weekends surfing with those same teammates, even when there aren’t competitions.

For Theresa Sindig, an American who lives in Zurich, Switzerland, having her son 10-year-old Alex Sindig join the ski team in nearby Lech, Austria, five years ago made sense. Not only is ski racing very much part of the culture of her husband’s native Norway, but it is also a part of the culture in the Alpine region where they now live.

“It gives him strength and confidence, and I think it’s brought him a lot of friends as well, where he might have been too shy otherwise,” says Sindig, adding that if they were in the US, “probably the kids would be playing soccer, but this is what they do in the culture where my husband comes from.” 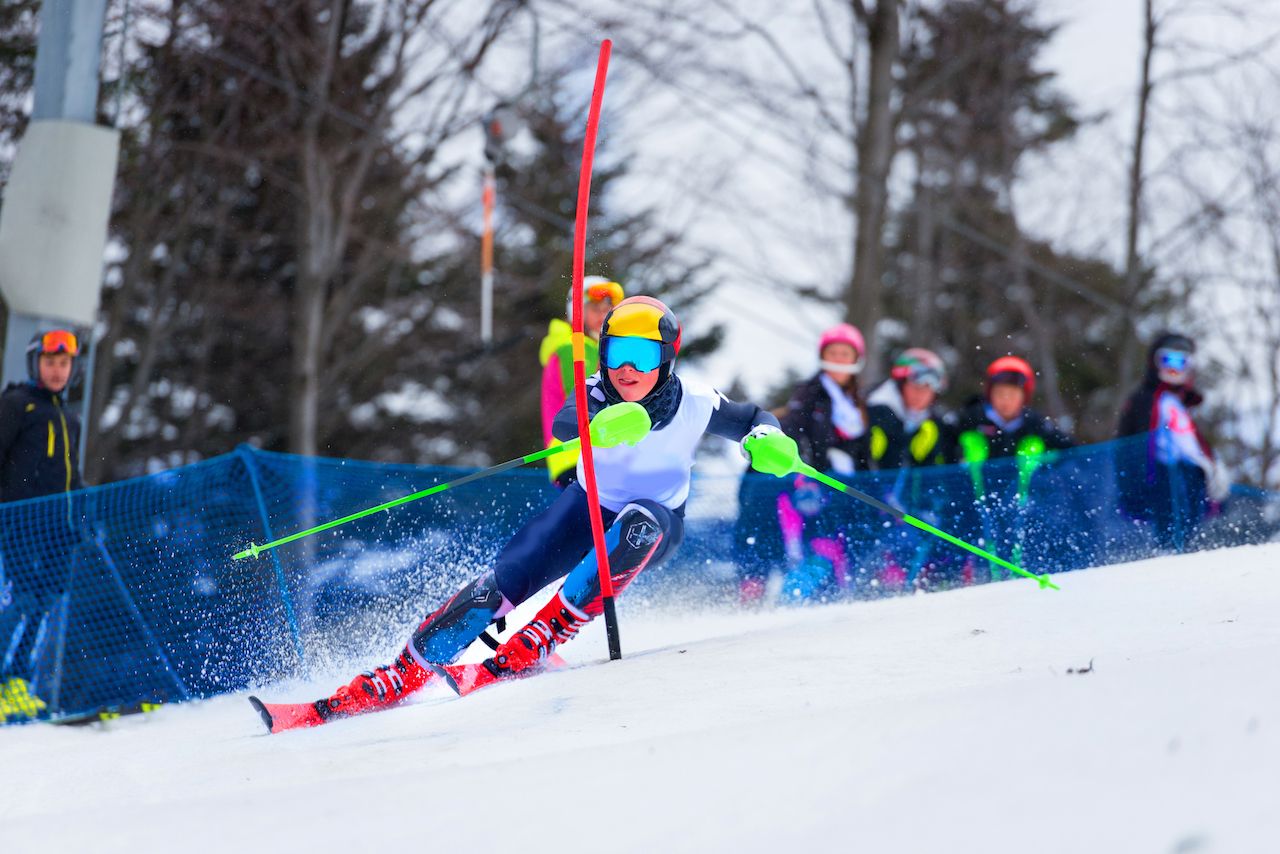 But helping kids build community through their sports and overcoming their fears means that parents need to wrestle with their own worries.

“Parents need to recognize their own fears, because very often parents’ fears either limit their kid’s participation or instill fear [in their kids],” says Dr. Taylor. When those fears are founded on legitimate risks, parents should turn their attention to addressing the dangers.

Dr. Taylor says a key way to “make sure kids have the tools to do extreme sports safely” is to create safer environments for them to practice their sport and, where logistically and financially possible, to enlist the help of experts. For her part, Sindig appreciates that Alex’s coaches take the long view, focusing on building essential skills before introducing riskier activities.

It was only last winter, for example, that her son Alex was race training with full-height ski gates, using a mouthguard and handguards. Prior to that, he and his young teammates skied around short gates since, as Sindig notes, “It’s more intimidating to ski straight at a pole. You need to have some skill first.” 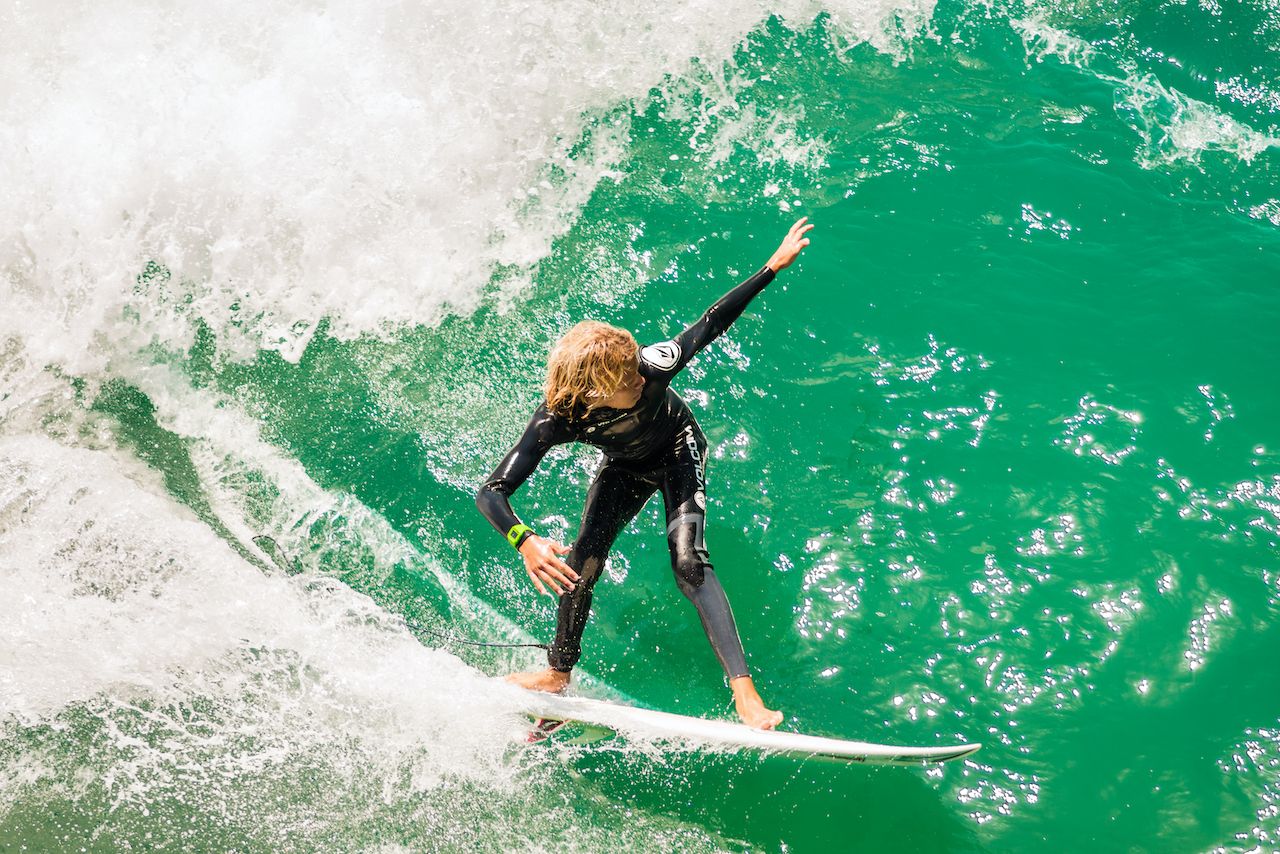 Alex’s Austrian coaches, says Sindig, “are very good at calming down the parents a little bit and focusing on the kids and the safety of the kids.”

The need for proper instruction is why Pardo de Zela and her husband hired a coach for Georgia. The fearsome conditions of Ocean Beach, where a surfer and several swimmers have died, are notorious. Often just getting out to the waves can involve up to 30 minutes of duck-diving on a shortboard under relentless, exhausting layers of whitewater.

“When she wanted to start surfing at Ocean Beach… [in] conditions I was never going to go out in, that was when we decided that we needed to find a coach,” explains Pardo de Zela. The advantages of having a coach, beyond simply ensuring Georgia was accompanied, quickly became clear: “They were actively teaching her things specific to … that beach but also general things, like what you need to do at any surf spot, so that made a big difference. I think without having done that, I’m not sure if I would have let her go.” 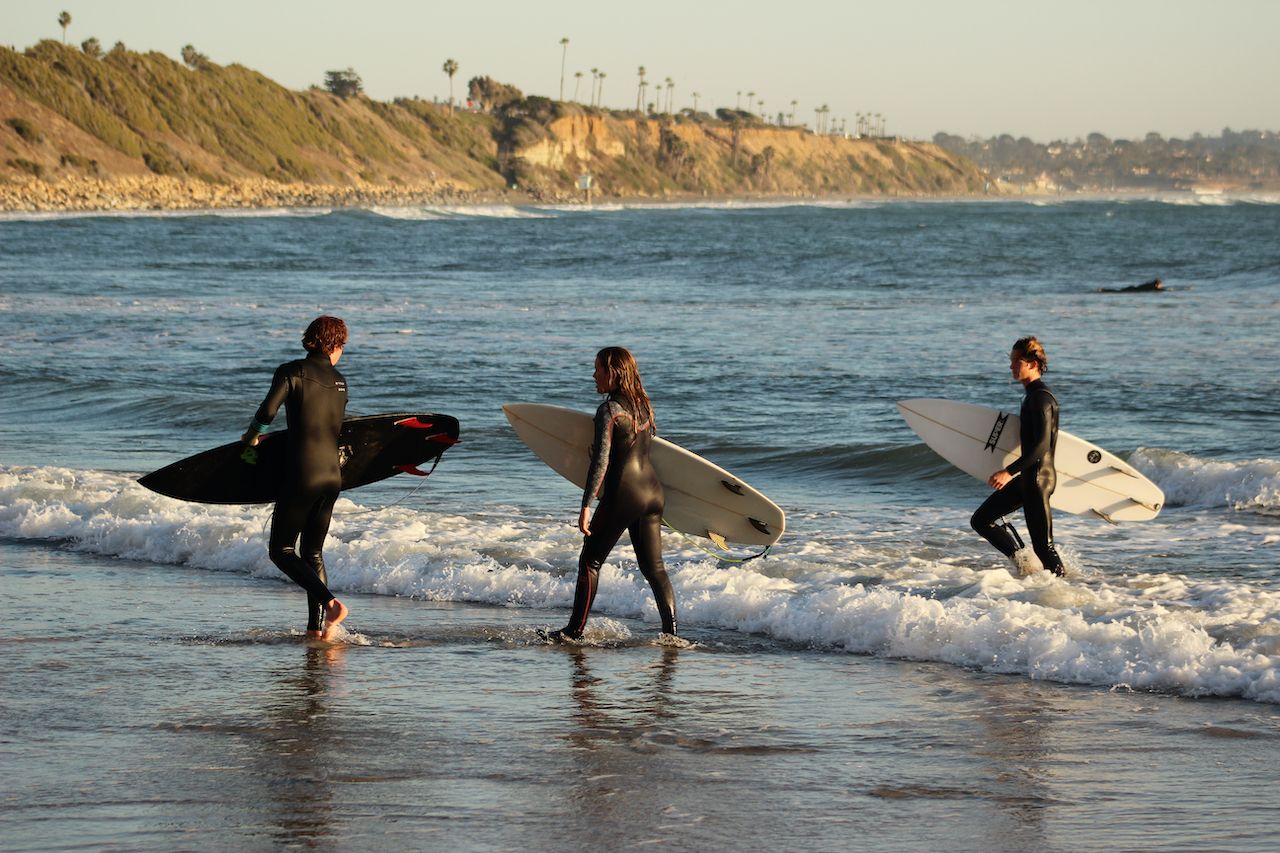 With a driver’s license, Georgia can now get herself and her board to Ocean Beach, but she’s only allowed to paddle in if other surfers are in the water. From a snapped leash to a fin injury to the head, anything can happen, so it’s helpful to know that a surfer might be nearby to help out. Pardo de Zela says Georgia knows to make eye contact and greet the other surfers when she gets to the line-up.

“‘Make sure they know you’re there, just on the off chance,’” Pardo de Zela has told Georgia. She notes, “There aren’t that many young teenage girls surfing out at Ocean Beach — it’s usually a lot of men — and they’d probably take notice and, consciously or unconsciously, keep an eye out for her.”

Pardo de Zela says she’s instilled in her kids a “healthy fear of the ocean” and appreciates Georgia’s sensibility “knowing that she wasn’t going to take any crazy risks. We talked a lot about it and she’d say, ‘Look, Mom, I’m going to paddle out and if I’m not comfortable, I’m going to get out of the water.’”

In fact, Dr. Taylor, who once participated in international ski races himself, says it’s critical to take a child’s disposition into consideration. He says that participation in extreme sports can teach some kids a healthy enjoyment of risk-taking. He experienced this growing up and sees it in his own kids.

“It’s been wonderful to watch them slowly become comfortable with speed and risks and having to take chances,” he says of his daughters. Dr. Taylor sees this as part of handling stress and overcoming adversity. Yet while some kids are more measured, others may be born “adrenaline junkies” and parents should ensure they aren’t taking unnecessary risks.

“If there’s a degree of recklessness, poor decision-making, poor choices, that’s a red flag,” says Dr. Taylor. In those instances, parents shouldn’t give their child unfettered access to a dangerous activity until their child’s skills have improved, they better understand the risks, and, in some cases, have also matured.

“Parents need to limit children’s risks until their executive function” kicks in and the child can make better decisions, says Dr. Taylor. He says parents need to communicate to their child that participation in a risky sport is a “progressively earned right.” 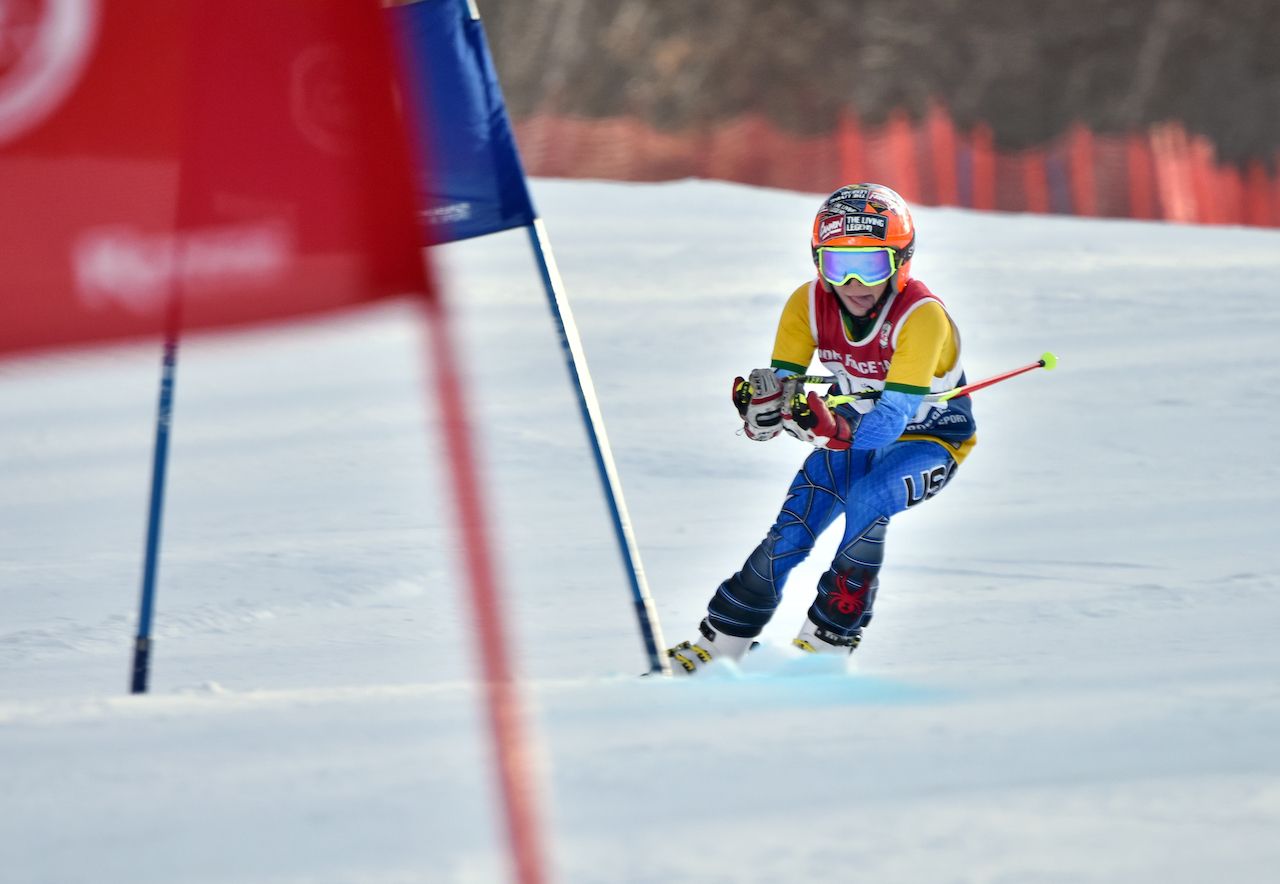 For children who work hard — with support from parents and, where needed, coaches — to earn that right, the rewards are notable. Beyond building confidence and community, becoming a skilled outdoor athlete can become a healthy part of a kid’s identity.

Being a surfer is part of Georgia’s self-image. She has spent the last two summers giving group and private surf lessons in the gentler waves of Northern California’s Stinson Beach and plans to volunteer with an SF group that introduces surfing to disadvantaged kids. Now a high school senior, Georgia is also applying to coastal colleges that have a surf team. 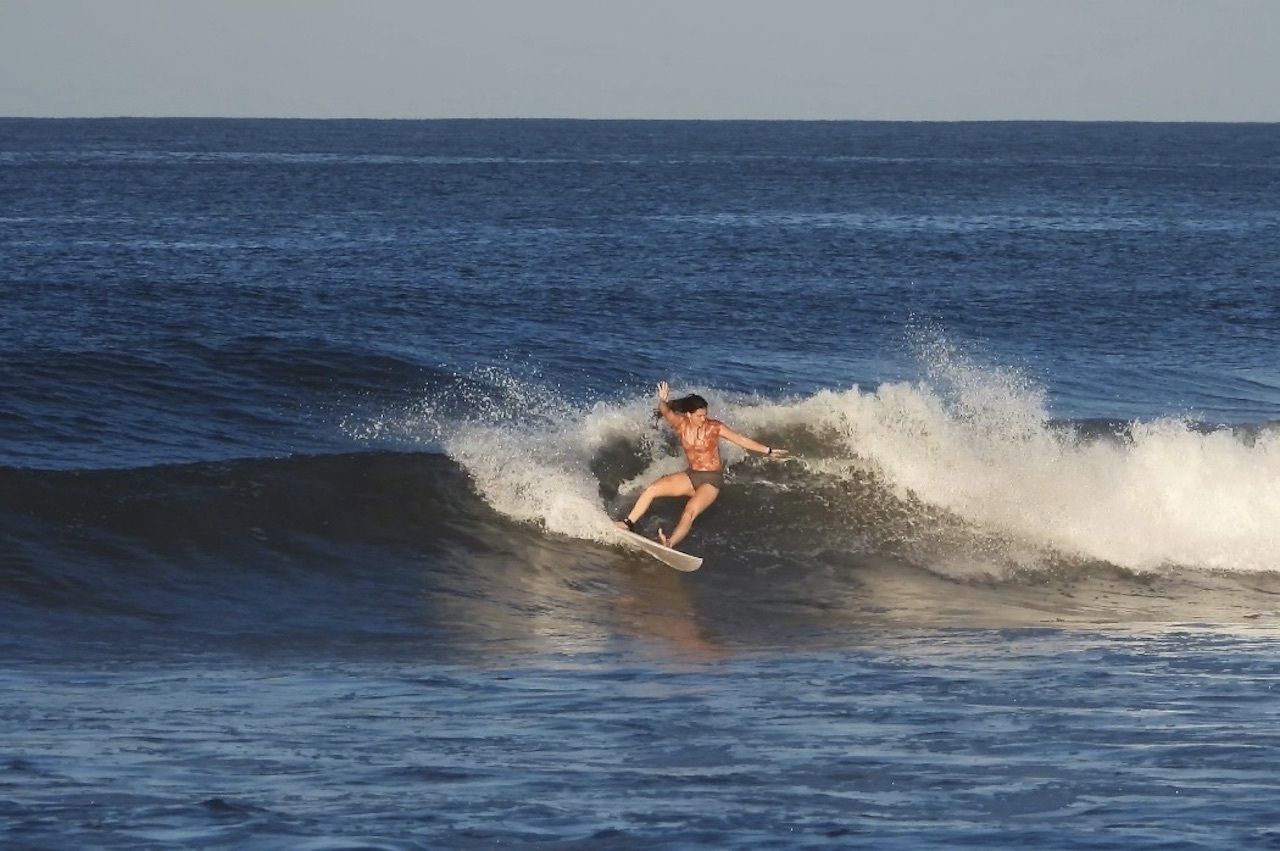 Likewise, ski racing has been valuable to Sindig’s son Alex, who was adopted from Thailand. “It’s also an identity for him. He’s adopted, so it gives him an identity as a skier,” says Sindig of the opportunities for Alex to ski on a team with local Austrian kids, as well as with kids from his international school team in Switzerland.

That identity piece sums up well what it means to be an extreme outdoor athlete. It means being confident that you can understand risks and safely overcome them, and being part of a community of supportive, like-minded peers.

Getting there is not always easy. “I know for a parent, it can be hard, it can be scary, especially if you’re concerned about your child’s safety,” says Pardo de Zela. She knows this well enough, as Georgia’s older and younger brothers are into skateboarding and rock climbing, respectively.

But, adds Pardo de Zela, “When your child does find something that they’re passionate about, that’s just so positive for them on so many levels. I would definitely encourage any parent to support that.”

CampingCamping With the Kids Is Easy When You Know What They Love About It
Tagged
Family Travel Outdoor
What did you think of this story?
Meh
Good
Awesome