This looks to be the year the world goes camping. But the Great Camping Return of 2020 may seem like a challenge for families who haven’t introduced their kids to this quintessentially American pastime. We’ve got you covered on how to pitch a tent and what to bring, and here we focus on what will make your family camping trip unforgettable — and only in a good way.

We asked kids what they love best about spending the night outdoors and then added in some hard-earned parental wisdom. These resulting tips will ensure a successful camping trip with the little ones — and hopefully start some new family traditions. 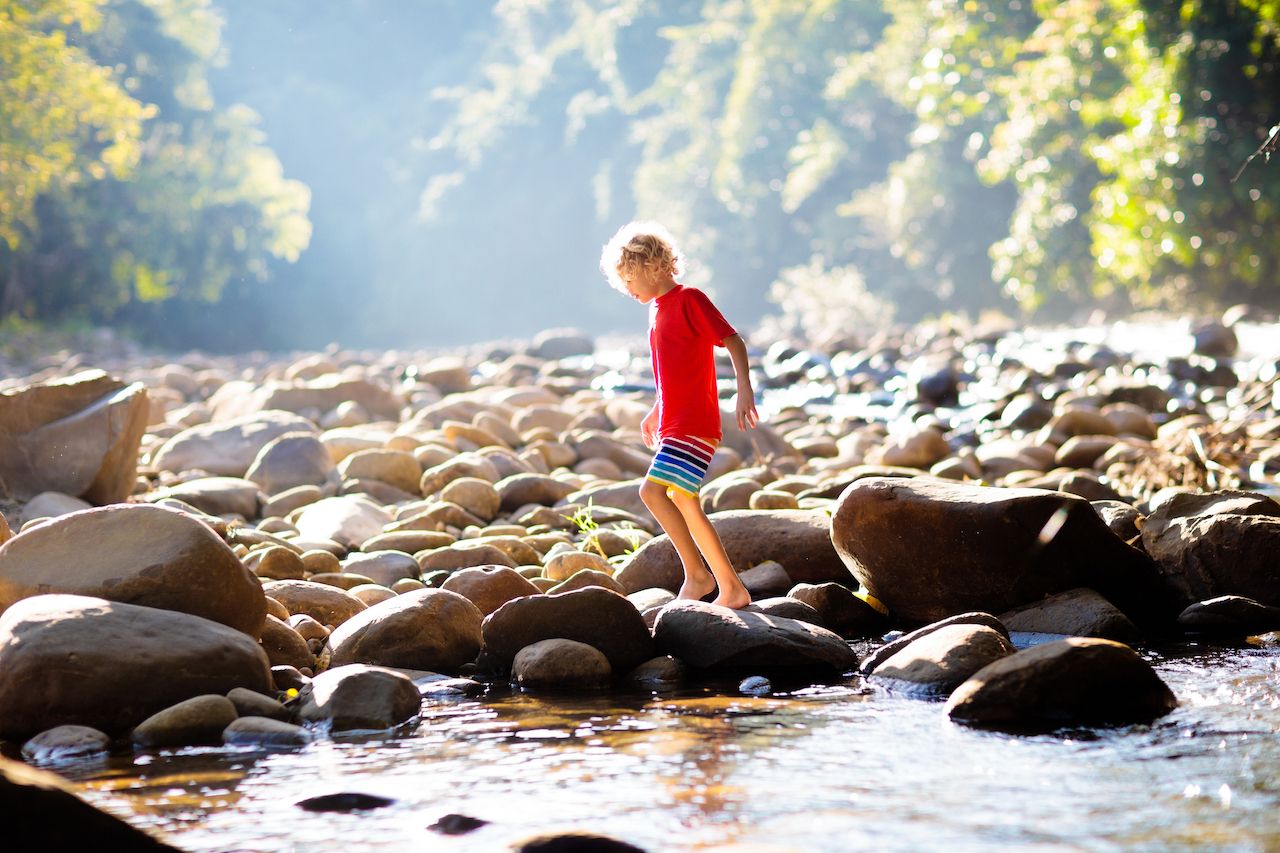 Kids love water, especially if they can safely swim or wade in it. So try to include water into your outdoor getaway. Rather than hiking uphill toward a stunning view, which may not impress your kids as much as it does you, hike toward an alpine lake instead. No matter how icy, jumping in that lake will be a welcome reward for the hike. Even a trek to a shallow creek that kids can splash around in will be an excursion that kids can get excited about. 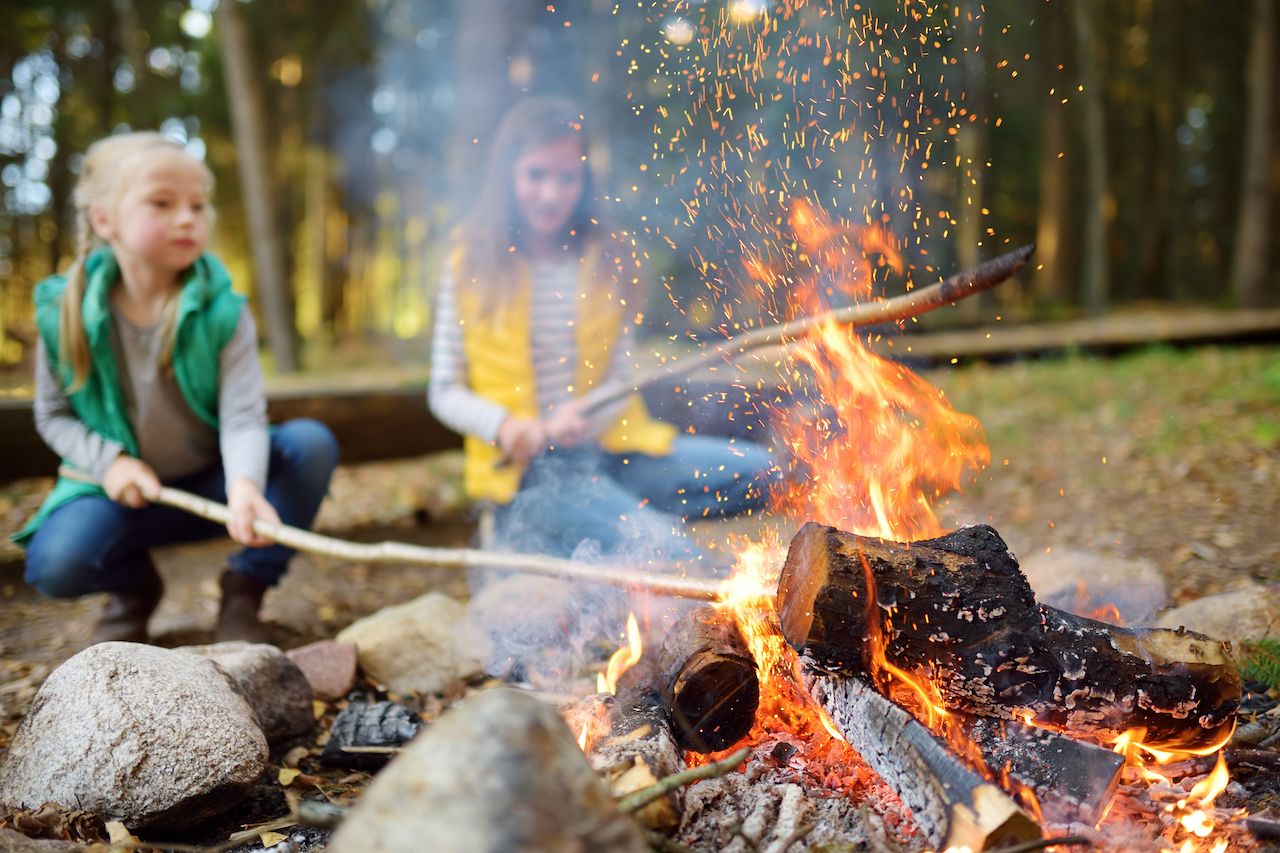 Fire seems to have a magical pull on young ones, and camping is one of the few times they can interact with fire in a controlled way. One reason kids love s’mores so much is that they’re not only dang tasty but also made in fire. So if there are any other food items that kids can make in fire, let them. Maybe they can cook sausages on a stick over the fire — a popular thing to do in the Nordic countries — or a metal grill so they can make pancakes over the fire. Yes, a camp stove is more convenient, and you should have one, but use that fire where (safely) possible. 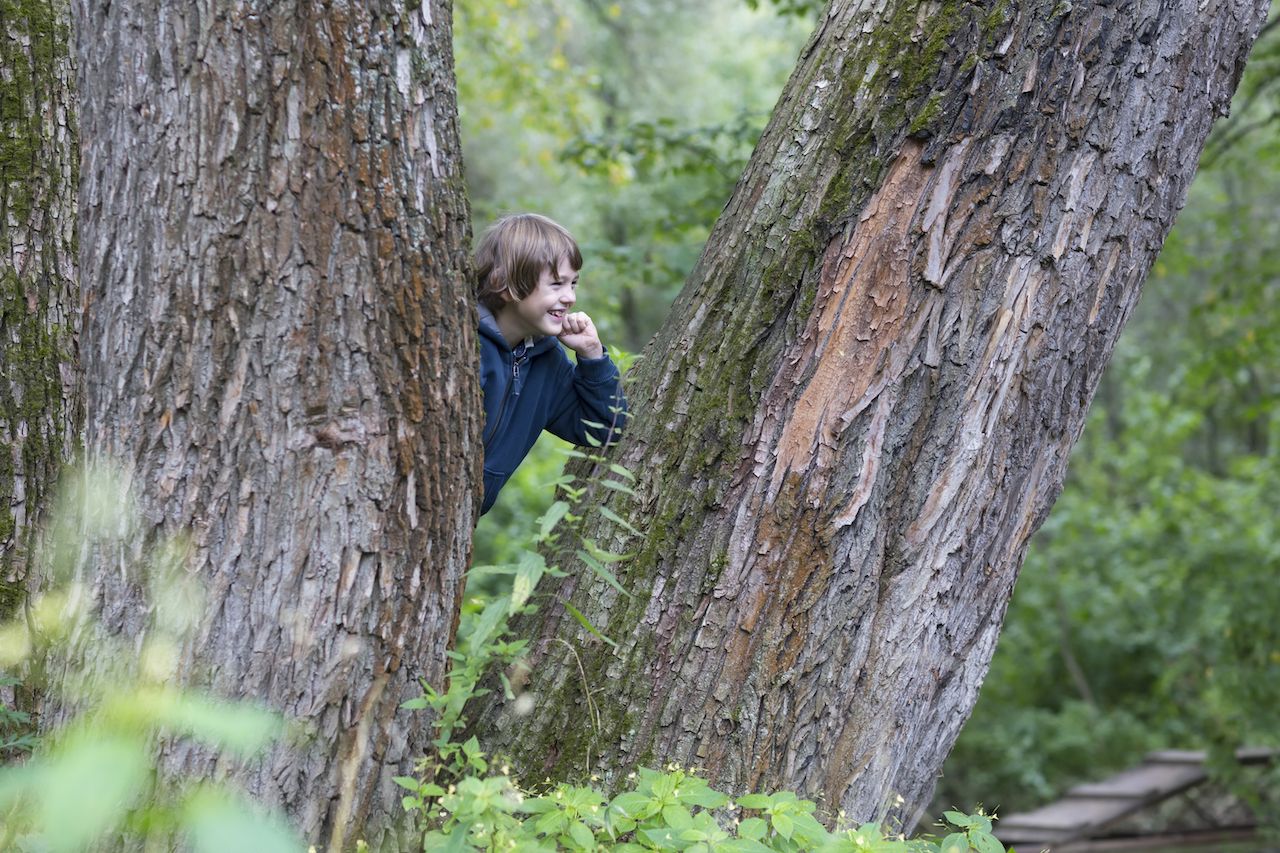 Quite possibly the most exciting thing about the great outdoors is the freedom to explore, a feature of childhood that kids still read about in books and see in movies — but are rarely allowed to do near their homes. Exploring the area near a campground, especially in something like a game of hide and seek, is thrilling for kids. Just be sure to lay down specific guidelines about how far they can wander before they set out. 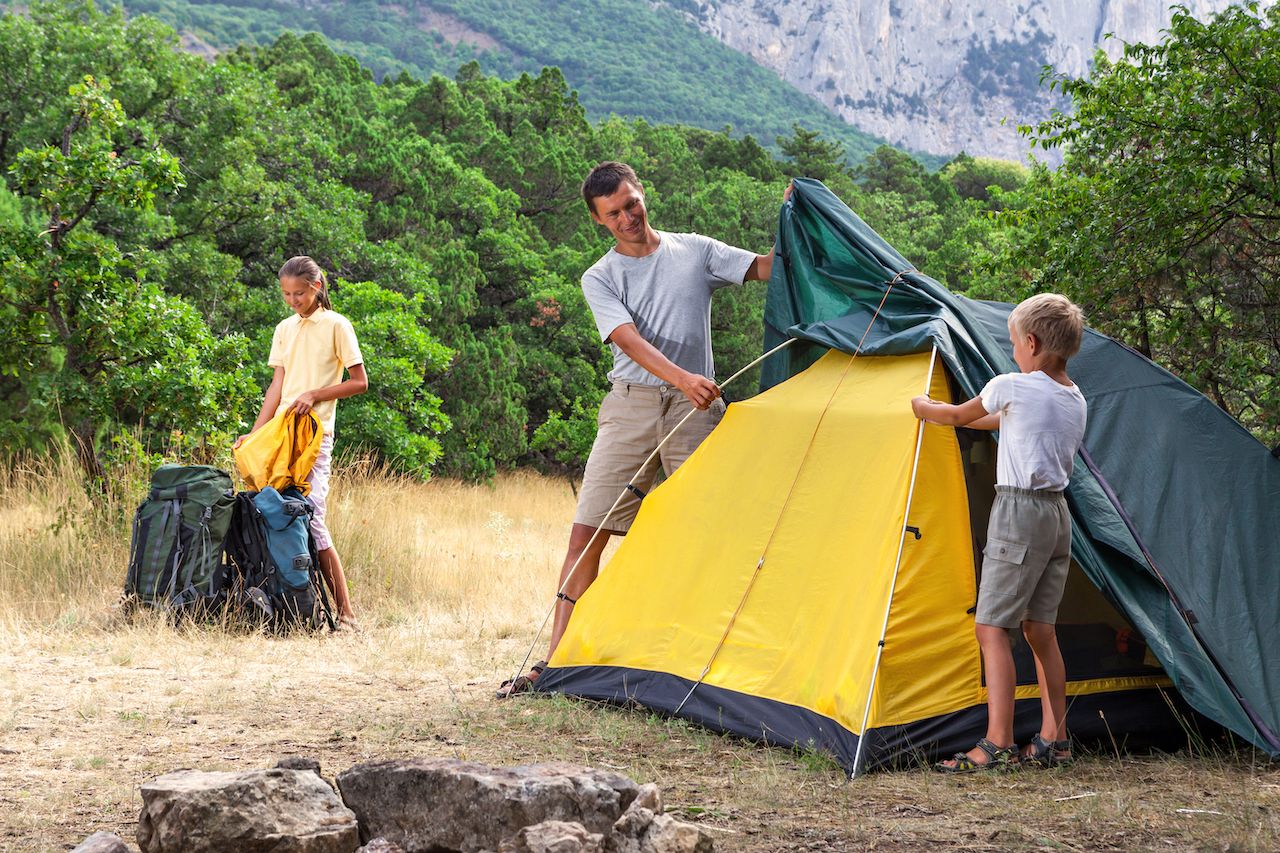 A corollary to freedom is the independence to make their own choices. Let kids pack for the camping trip, drawing from a list of essentials that you’ve given them — just be sure to check what they’ve packed before you head out. Also, ask them what foods they’ll want to eat on the trip. And when you arrive, let the kids personalize their tent. Beyond getting their input on where the tent should be, and helping them set it up, let them “decorate” the tent with a hanging lantern inside and maybe even a string of lights outside. 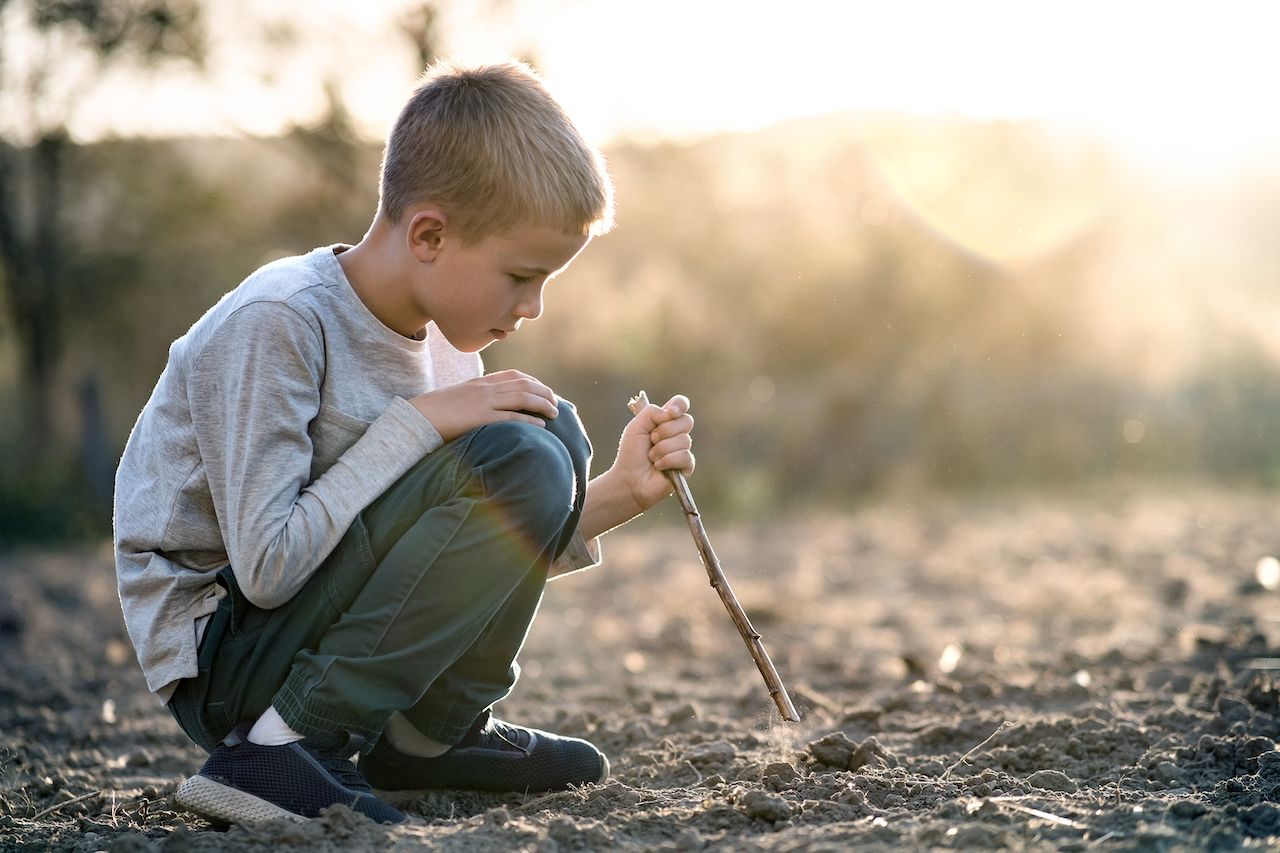 There’s a reason we fill our cupboards with crayons and wonder what to do with the endless artworks kids bring home from school. Children are happiest when their imaginations are inspired and they’re using their hands. So bring one toy if you have to, but trust the outdoors to be the source of entertainment instead. Make it a no-electronics weekend and help the kids make forts out of sticks, “bake” mud pies (with your supervision if they’re near water), and create artworks in the dirt on the rocks using the natural materials they find around them. 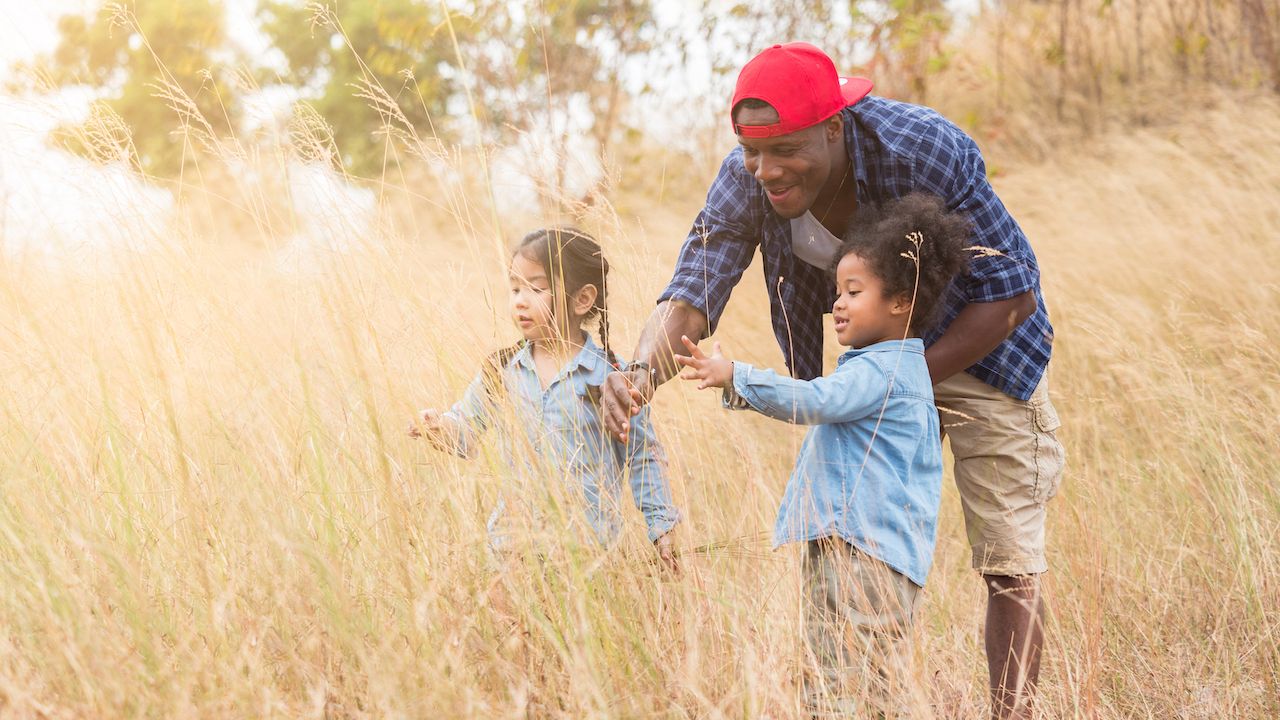 Kids’ lives are often ruled by time. Every day is a race against the clock — setting off to school, getting to class, waiting for recess, pining for the day to end, and then heading out to one or more after-school activities. Even weekend sporting commitments mean time is ever-present in their lives. So do them a favor: In addition to taking away their electronics for the weekend, hold onto their watches for a while. While you may need to know the time, the kids should enjoy a day or two with only the sunshine and mealtimes as their chronological guide. 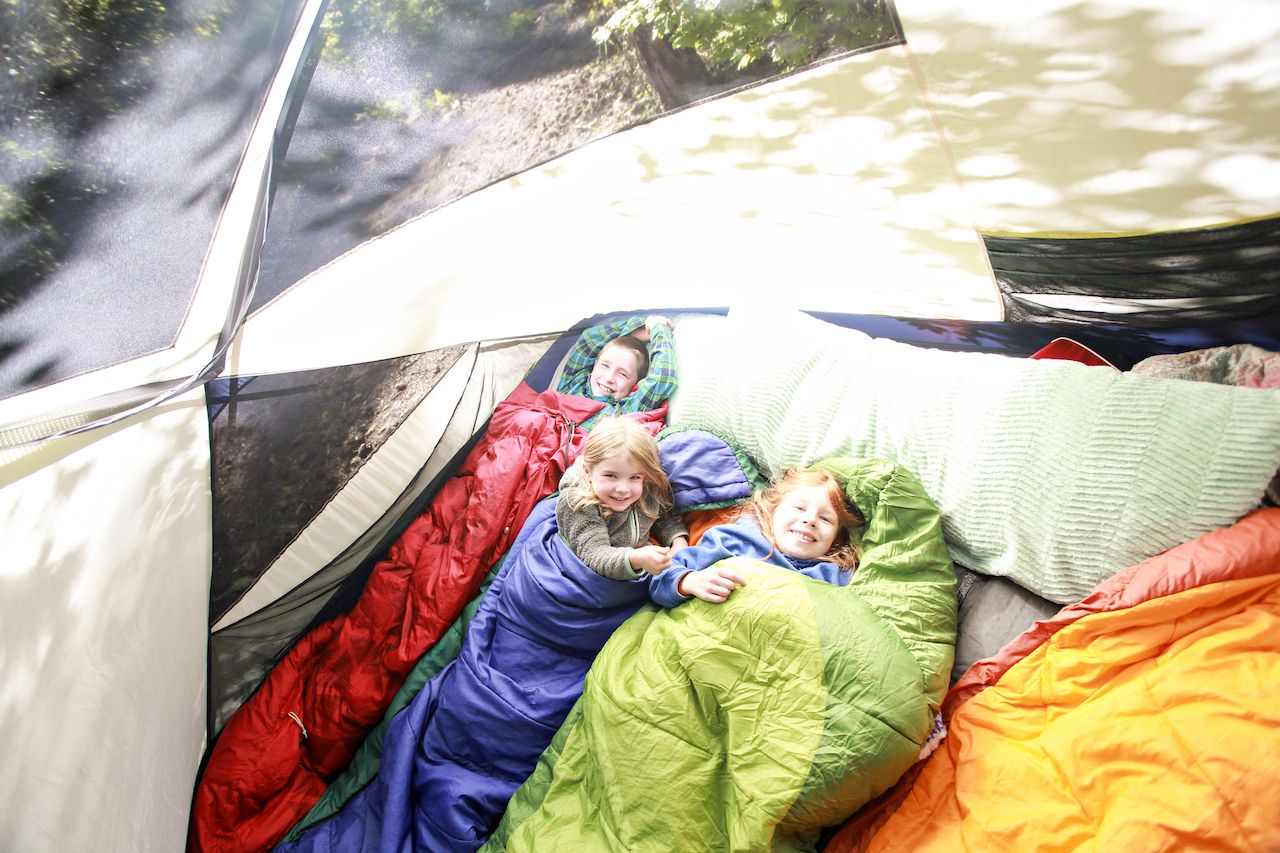 Okay, on camping trips kids may not actually want to go to sleep given the pull of the campfire, ghost stories, and the rest. But while kids may not want it, they do need it. And so do you. So don’t skimp on this part. If you’re car camping, an inflatable air mattress is worth the expense and space in your car.

Kids love small spaces. There’s just something comforting about it for them. That’s one reason they seem to love tents so much — because you’ve just taken a house or bedroom and shrunk it down to its most essential part. You can also make them feel cozy by the fire, with comfy blankets they can wrap themselves up with. (Just don’t use these later for sleeping since they’ll be full of dirt and smell like smoke.) 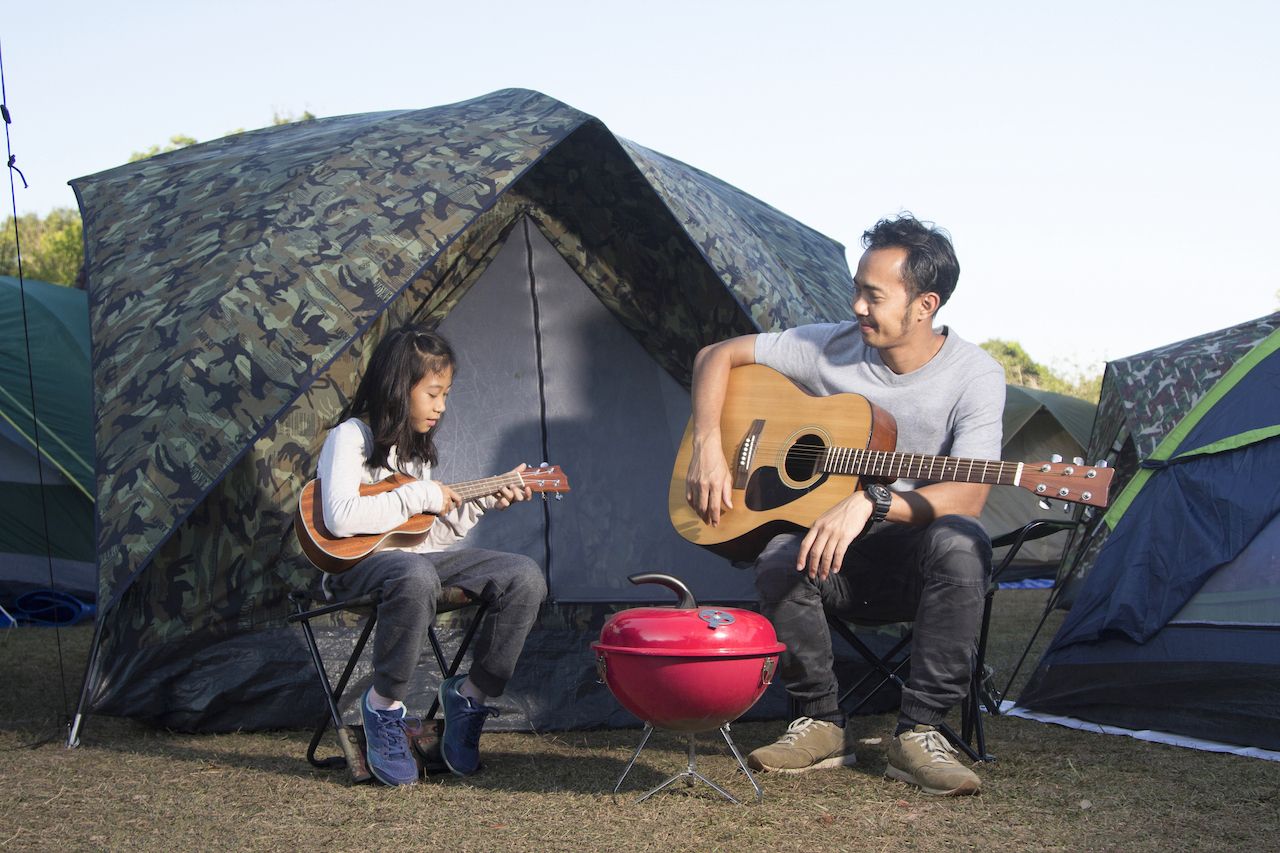 We don’t need to tell you how much kids love them. If you can play even a few chords on a guitar, banjo, or ukulele, bring that instrument along. And don’t worry if you’re not a musical family or don’t know any fireside ditties. If your kids have been to any summer camps themselves, they’ll know more than enough songs for a night. Let them sing while you mumble along. And should “Kumbaya” not float your boat, James Taylor songs like “Carolina in My Mind” are campfire classics. Kids also tell us that Beatles songs sound plenty comforting and old-timey for a campfire, too.

Also, even though summer’s late sunset can make it easy to put off dinner, just remember the sun will also rise early. And when that light comes in through the trees or over the hill is when your kids will wake up. So start dinner early and eat while it’s light out if need be. Save the darkness for those campfire songs. 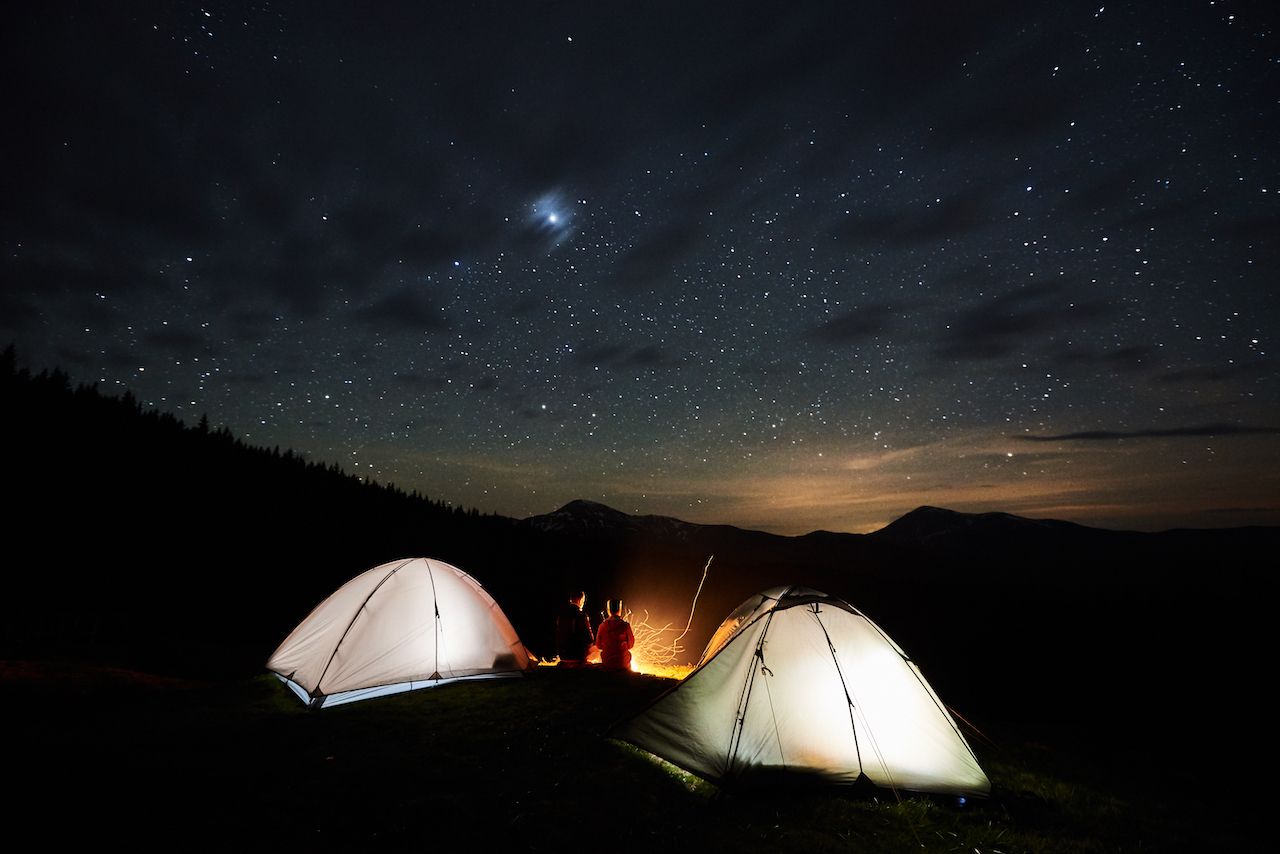 In the same way that kids enjoy reimagining the clouds above as something else, they also love to stare in awe at the night sky. It’s also an activity that rarely fits into their busy weekday schedules and which may not even be possible in cities choked with light pollution. So make sure there’s time after dinner to look up. If you don’t know the names of the constellations, just put your heads together and invent some new ones. 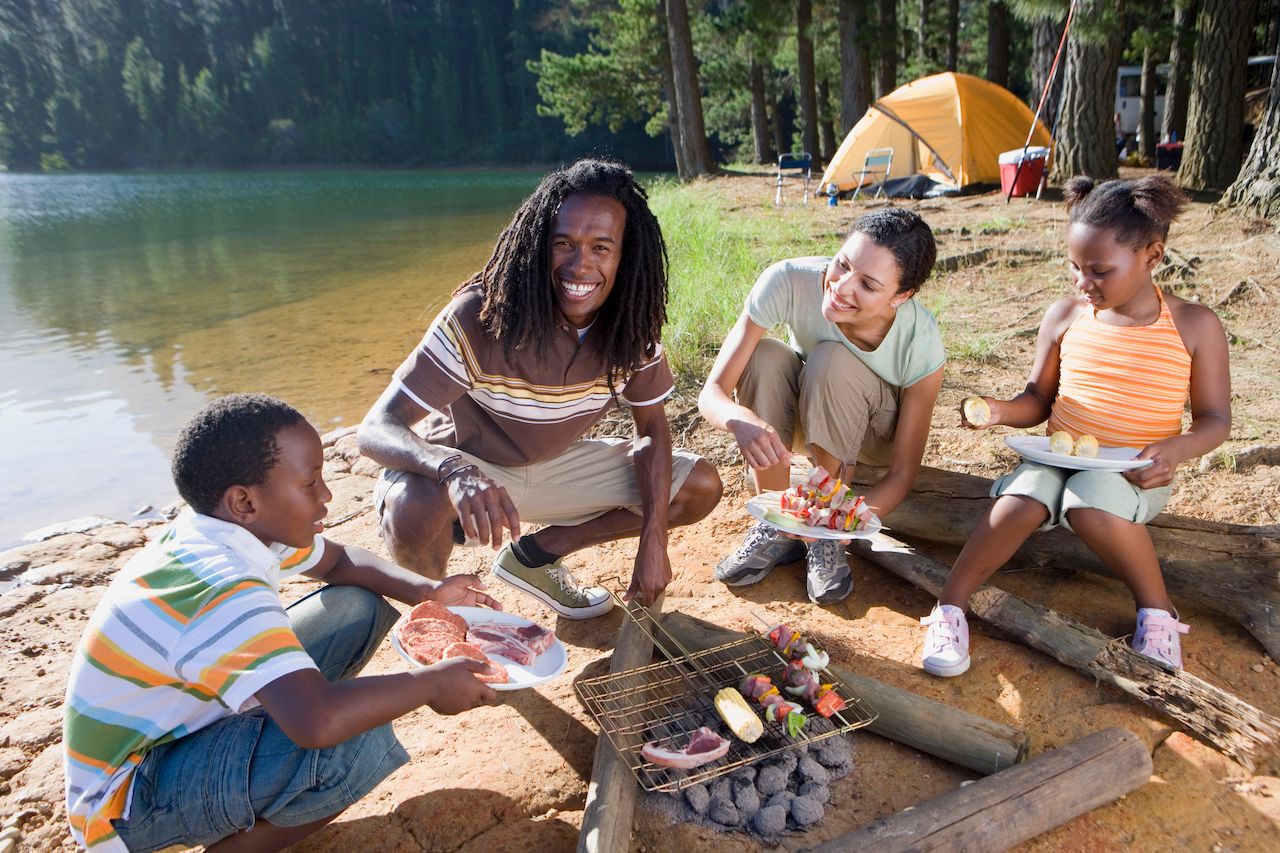 Treats, like s’mores, signify that the moment is special. Another treat could be to start the day with hot chocolate. While you savor your camp-stove coffee, let the kids warm up their own hands over some gooey instant cocoa. You can also create other camping-specific “treats.” For example, tortillas are easy to bring since they take up less space than bread, don’t get squished, and are great receptacles for those last-morning, everything-that’s-left fry-ups. So make peanut butter and jelly tortilla roll-ups and tell your kids they’re unique camping delicacies. Since things taste so much better when we’re outside being active, it’ll probably work. 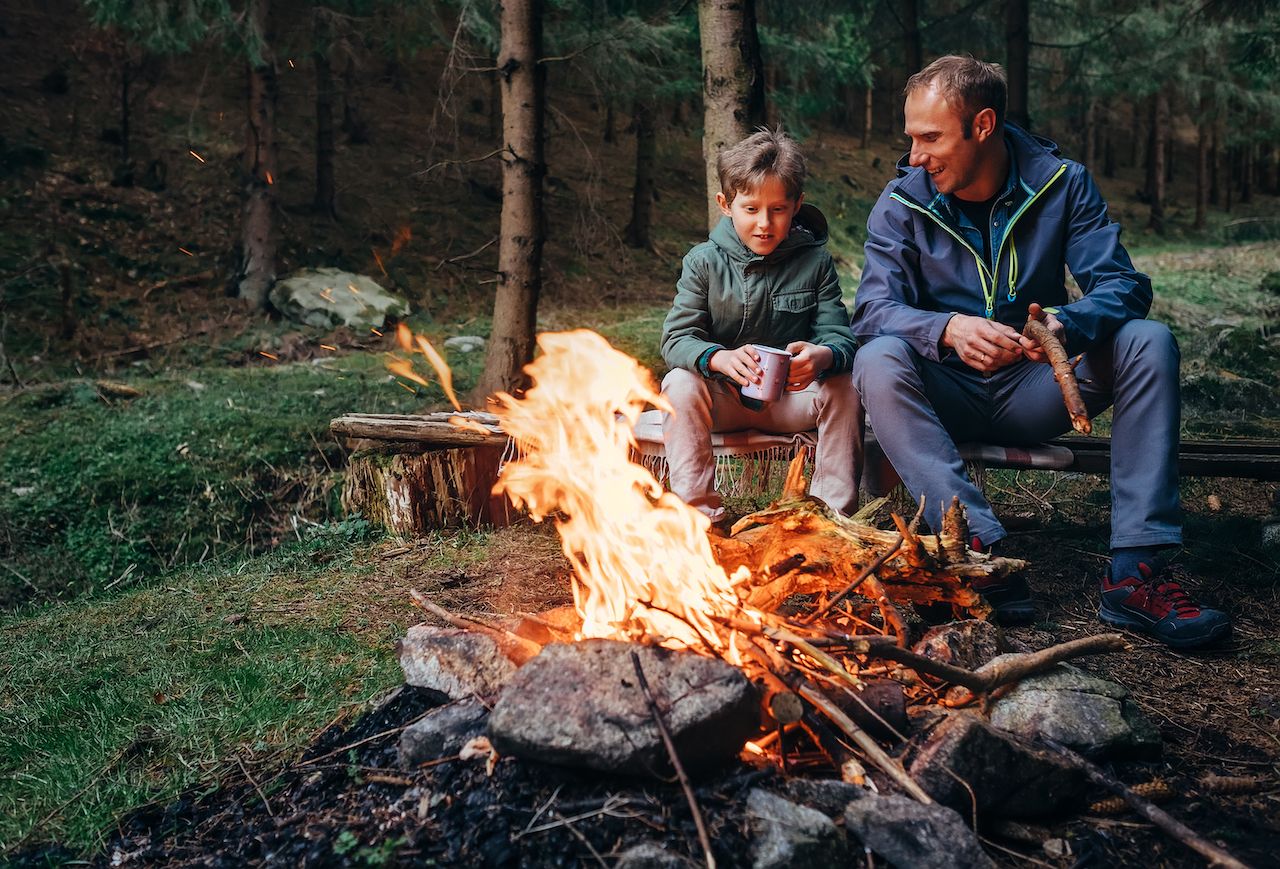 Looking at stars and naming your own constellations, singing corny campfire songs, and having messy hot chocolate for breakfast are all part of building traditions. And kids really do love traditions. So take the best ones from your first camping trip together and include them in the next one. Pretty soon the issue you will have is not if your kids want to go sleep outdoors but when they’ll stop begging you to take them camping again.

CampingThe Ultimate Guide To Everywhere You Can Camp Permit-Free on US Public Lands
Tagged
Camping Family Travel
What did you think of this story?
Meh
Good
Awesome