“You see that down there?” Mason, my flight seeing pilot, said as we banked over Whiskeytown Lake. It was surrounded by what looked like desert mountains, an oasis of blue in a field of brown. “Last year, we had trees going all the way down to the waterline. Now it looks like Lake Mead.”

He was lamenting the destruction wrought by the Carr wildfires of 2018, which hit little Redding, California, and much of far-northern California harder than most people realized. The Whiskeytown recreation area was almost completely devastated, especially the emerald trees that once surrounded this mountain lake.

Despite the swaths of post-fire apocalypse, the view from the plane was incredible. Beyond Lake Shasta and its famous dam, we saw snow-covered Mount Shasta towering in the distance with the Cascade Mountains to the east and Lassen Peak further off. Deep green mountains filled the landscape between our plane and the icy peaks, with the Sacramento River running a shiny blue through it all. 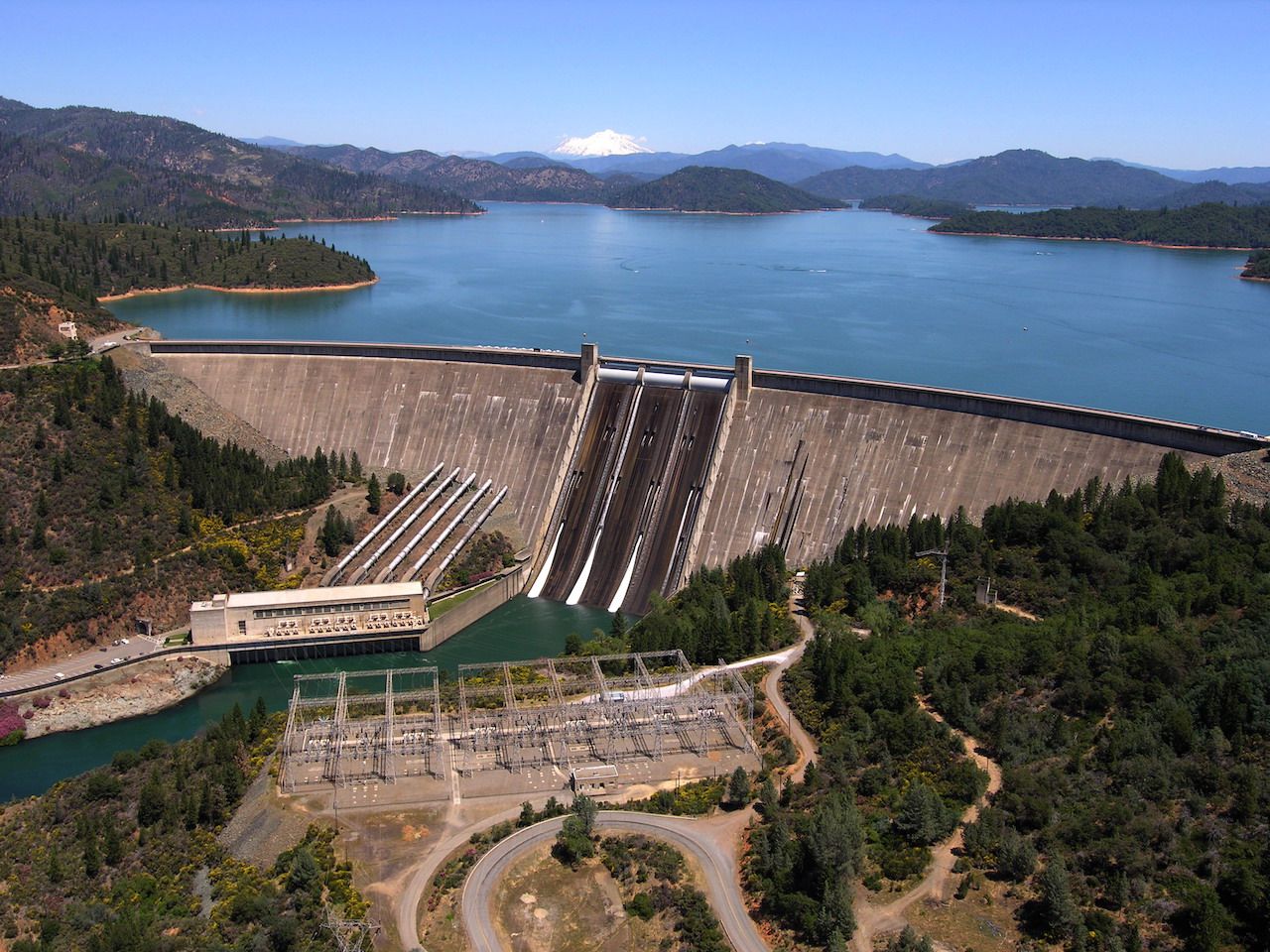 In a state full of wilderness traffic jams, where a weekend “escape” to Yosemite or Mendocino has you fighting thousands of cars and tens of thousands of people, the region around Redding still feels remote. It’s a place where you can drive a two-lane highway flanked by firs and redwoods and not see a car for miles. A place where, on a slow day, you can be one of only seven people in a national park. And a place where locals still treat tourists like guests, instead of a nuisance.

Rainforests and waterfalls abound like a temperate Caribbean island. 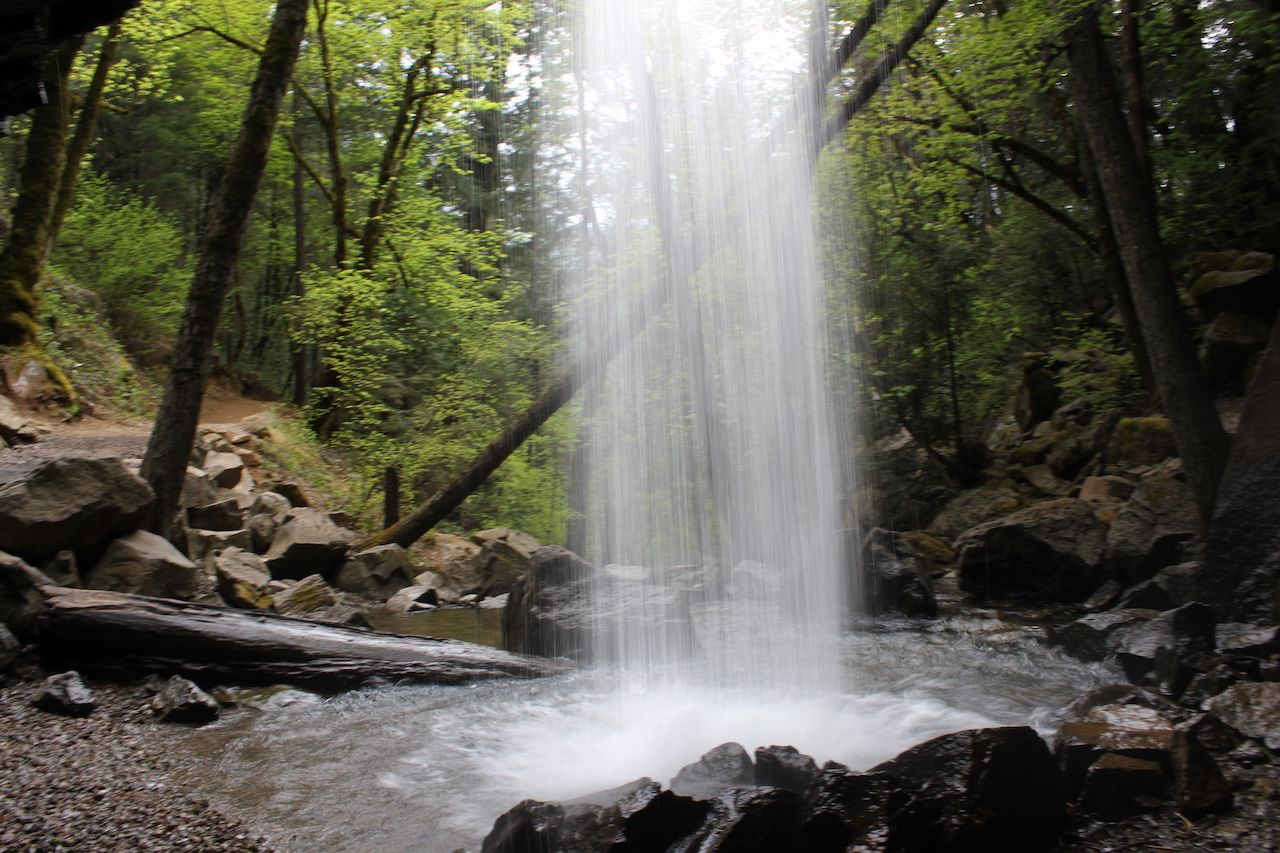 Nobody’s confusing Redding with Dominica, but the abundance of easily accessible waterfalls is something I’d only seen in the Caribbean. The best way to see them is exploring the waterfall loop, an admittedly lengthy drive past 13 waterfalls within a short walk of your car. It’s almost impossible to do them all in one day, but if you pick a few, it’s a magical way to spend the afternoon.

About 50 miles north on I-5 in Dunsmuir, you’ll find Hedge Creek Falls. A 0.7-mile walk takes you down through bright green moss and thick ferns to the falls, complete with a path behind them for viewing from all angles. 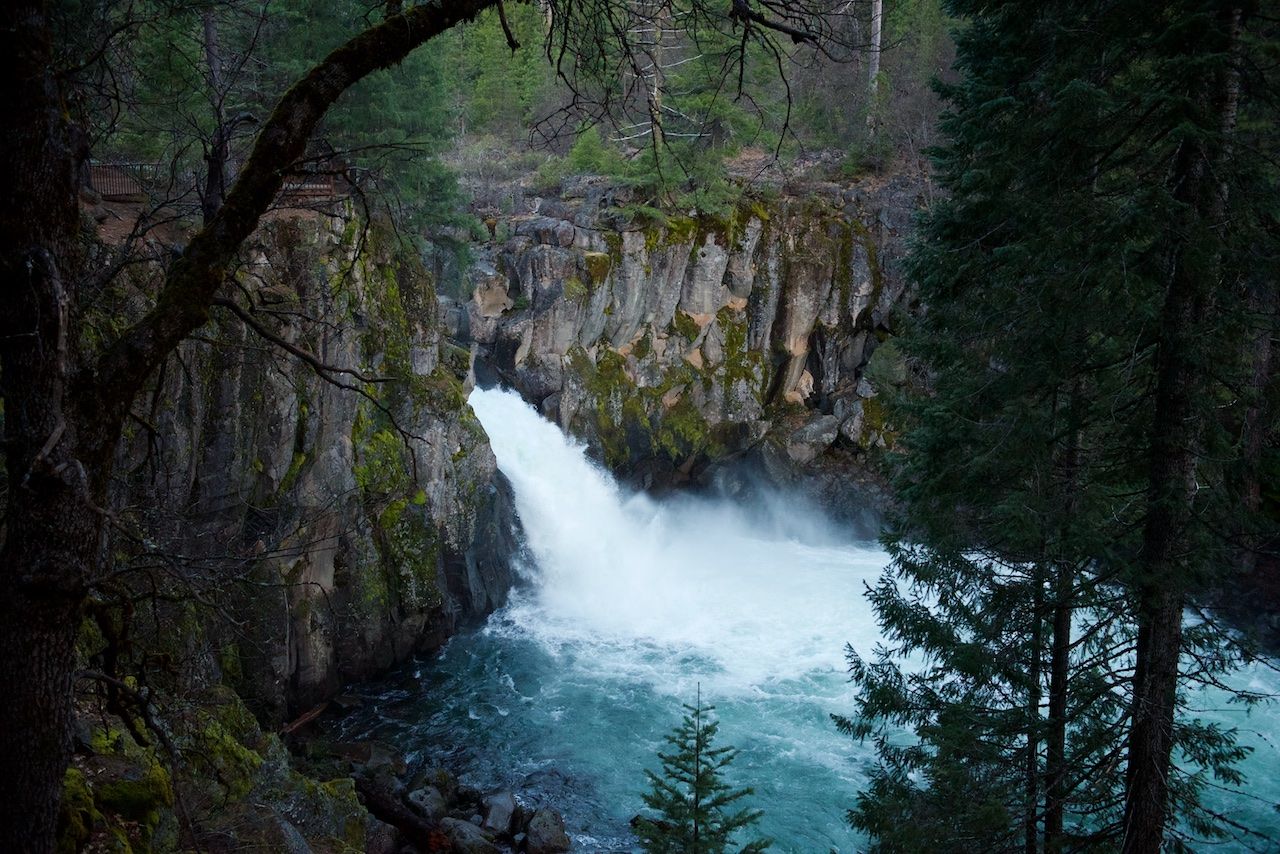 The loop also includes McCloud River waterfalls, a series of three falls along the river. You can walk between them on an easy waterside trail, where the powerful sound of the cascading water makes the experience almost meditative if you can keep your hands off your phone.

Another hour brings you to perhaps the most impressive falls in the loop at McArthur-Burney Falls, which sits on the side of the Cascade Range between Mt. Shasta and Lassen Peak. The 129-foot falls see nearly 100 million gallons of water per day, and though their power is impressive, the bright blue pool at the base reflecting the colors of the canyon is downright mesmerizing. 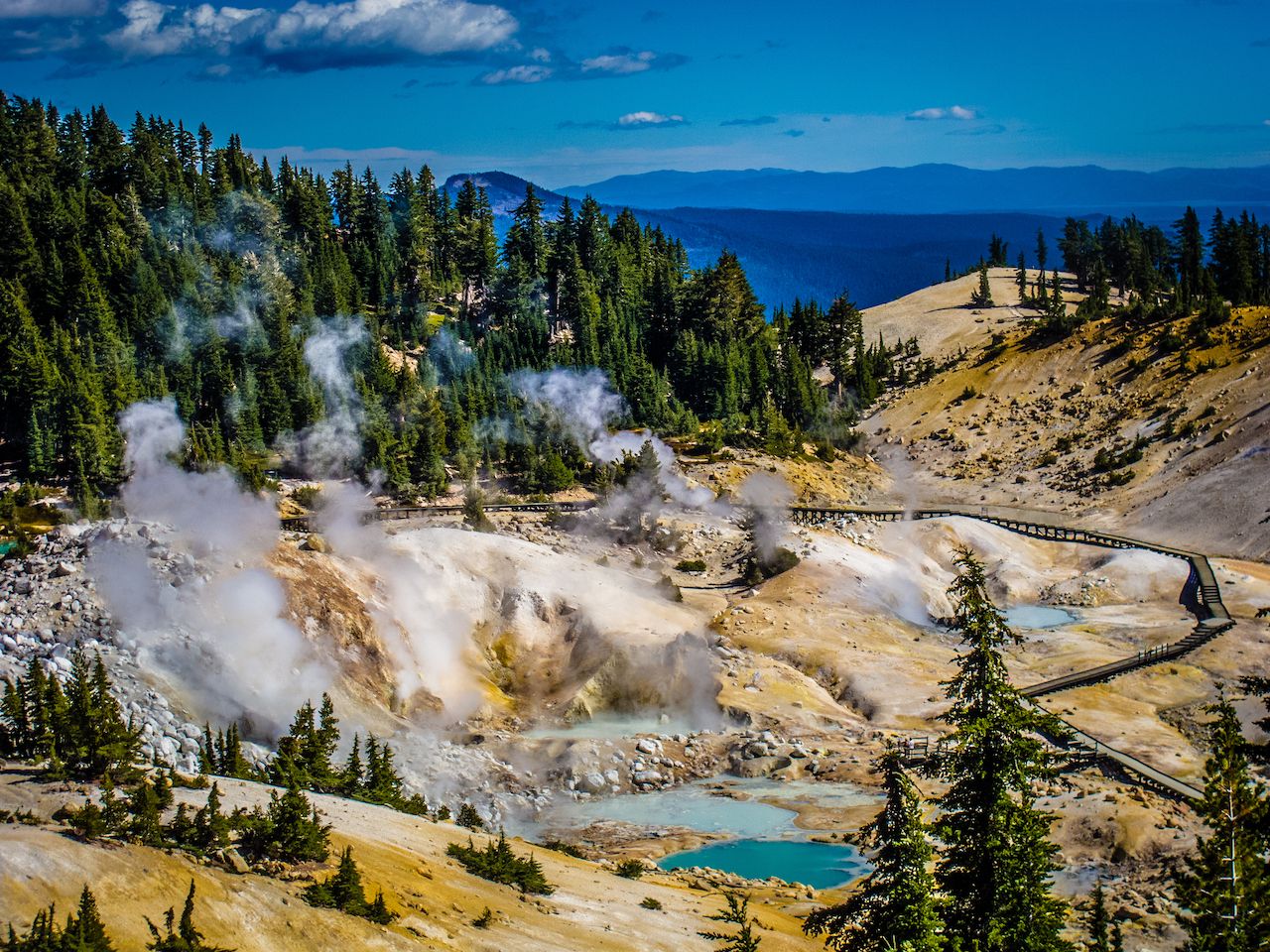 Lassen Volcanic National Park, about an hour’s drive from Redding on Highway 44, is the only place on earth to host all four types of volcanoes (shield, plug dome, cinder cone, and composite). Despite its volcanic diversity; vast, barren lava fields; and geothermal springs, it receives just over half a million visitors a year. On the day I went, I was one of seven people there.

Driving through you’ll go from alpine wilderness to a loosely vegetated surface of the moon to glacial paradise in the span of an hour. The only other place like it I’ve seen was Iceland, just without the tour buses.

On the road between McArthur-Burney Falls and Lassen, I also happened upon one of California’s great roadside attractions in the Subway Cave. What might reasonably be called the creepiest natural attraction in America, this natural lava tube just looks like a perfectly carved subway tunnel, with a gravel-free floor and smooth ceilings. The first couple hundred yards seem perfectly fine, until literally all the light disappears. Without a flashlight, you’re suddenly surrounded by darkness and silence, with no sense of which way you got in or which way to escape. 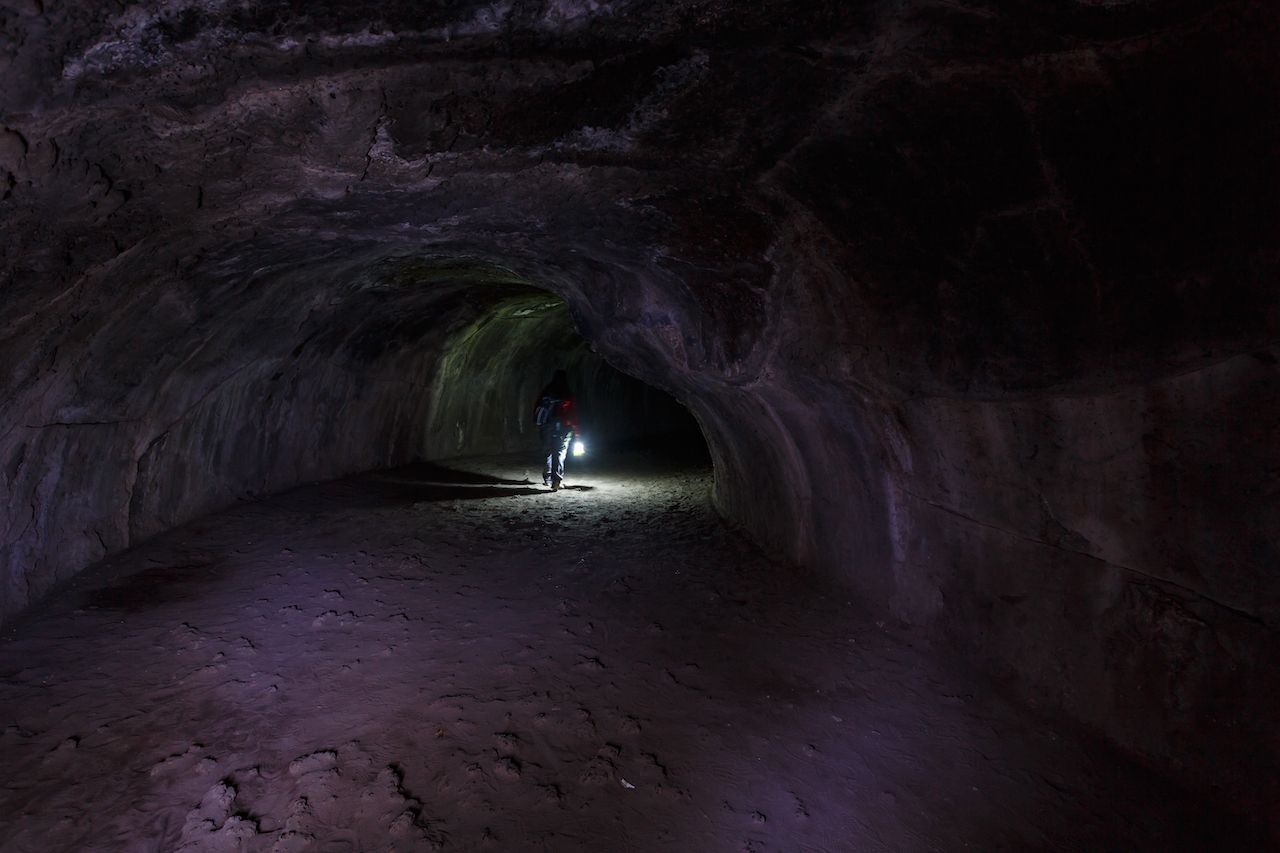 If you do have a flashlight, little podiums with maps and information on the cave act like tour guides, and if you want a little slice of serenity, turn your light off and just stand in the abyss. Though the tunnel stretches only about 1,300 feet, if you don’t know how long it is, you may think you’ll be stuck there forever. But don’t worry, it only takes fewer than 10 minutes to walk through.

Getting out on the water is easy. 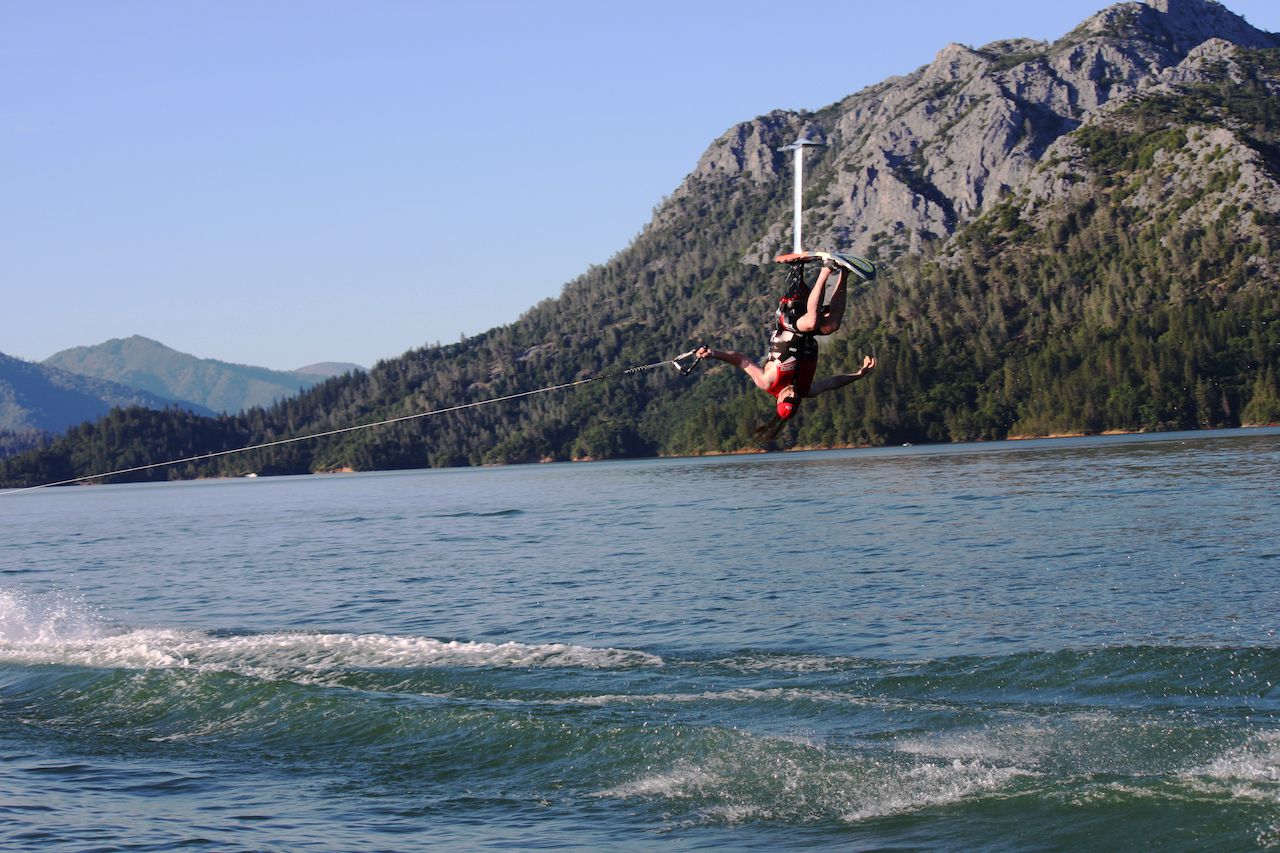 Banking back over Lake Shasta, Mason the pilot pointed out a white marina jutting out into a pale blue lake.

“Next weekend, that’s gonna be filled with kids on houseboats,” he said, referring to the upcoming Memorial Day holiday. “I don’t know how a college kid affords $25,000 a week for a houseboat, but hey, maybe they’re just dipping into that trust fund.”

We are flying over Lake Shasta which, for years, has been a sort of Havasu North.

But when it’s not full of partying houseboats, Lake Shasta offers kayaking, paddleboarding, and swimming in the reflection of snow-capped mountains. You can take dinner cruises across the lake to enjoy it by sunset or all-day tours that include visits to the mind-bending caverns nearby. 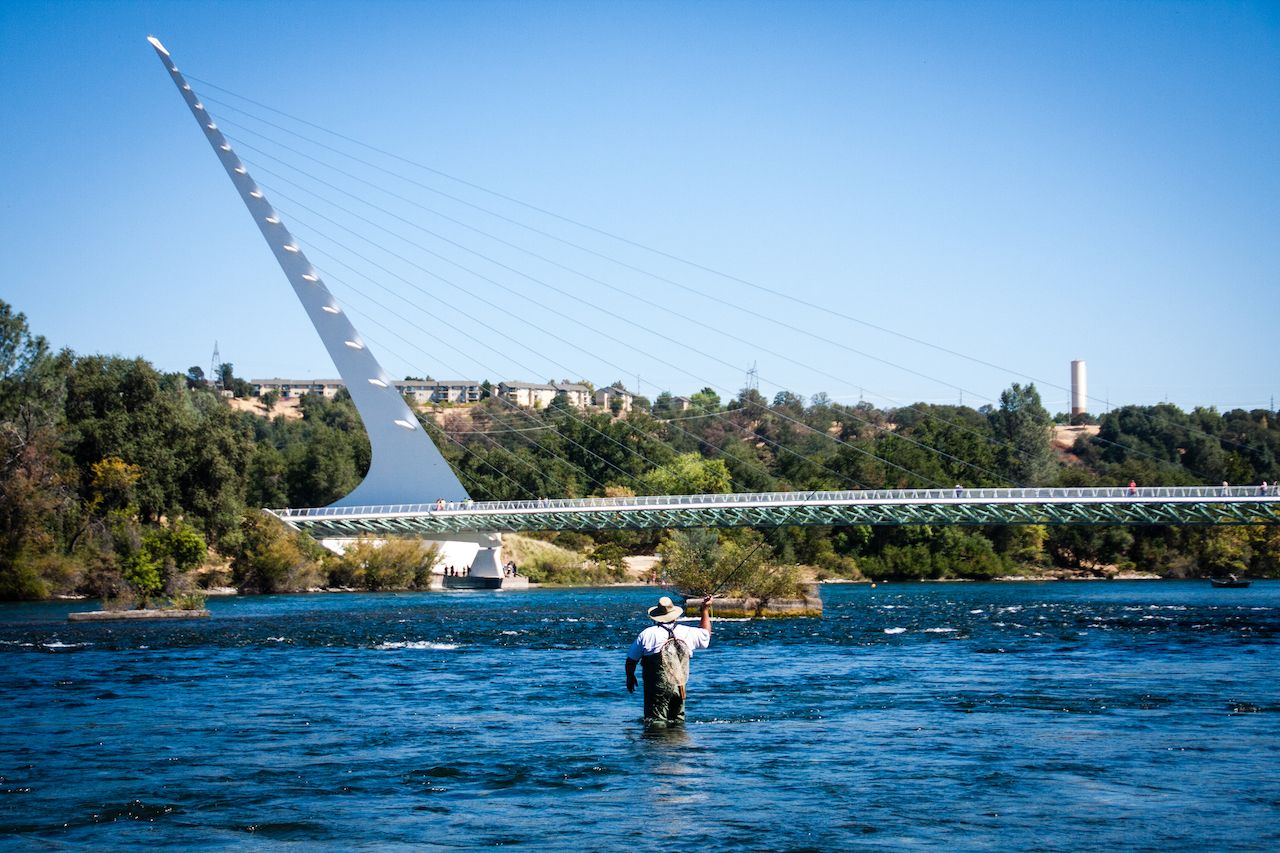 The other big aquatic draw in Redding is fishing. Along over 40 miles of the Sacramento River, you’ll find rainbow trout swimming to Lake Shasta, and even in-season you won’t have problems finding a spot to cast your line. But if you want even fewer people, some of the best fishing in decades can be found along the McLoud, Pit, and Upper Sacramento rivers with record water levels this year. 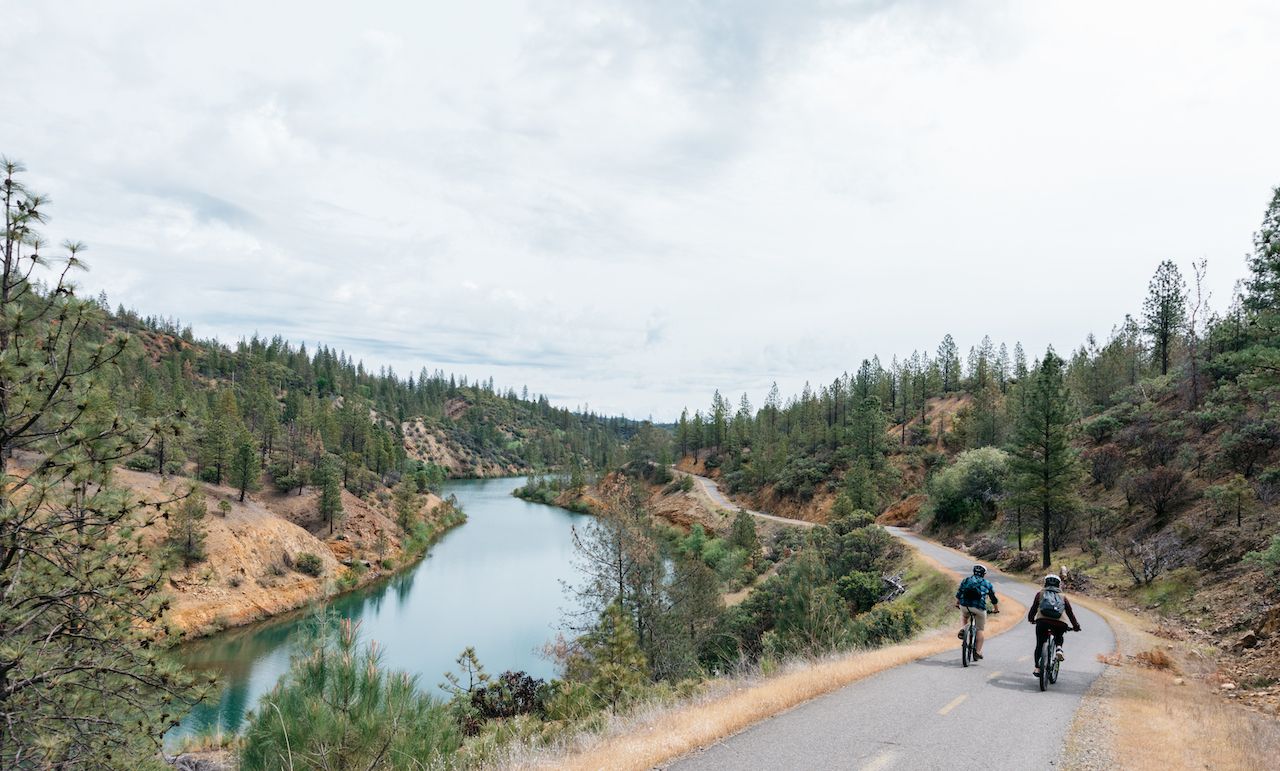 The mayor was smoking me on the trails.

Brent Weaver, former Redding mayor and founder of the Mayor’s Mountain Bike Challenge, was riding ahead of me on the Lower Sacramento Ditch Trail, a soft beginner’s trail cruising along mountainsides with views into a deep green valley. He navigated the switchbacks on instinct, politely waiting for me to figure them out before speeding ahead. We stopped at a lookout point to survey the damage from last year’s fires.

“I was on a family vacation in Alberta, and they have CNN on and I see ‘Redding; California,’ on the bottom of the screen with all these shots of the fires,” he says as a blacked-out hill stands behind him. “I immediately called and asked if I should come back and they told me ‘leave your kids there.’”

The horrors of the fires are over now, and Weaver, along with others in Redding, is determined to get news focused back to the city’s mountain biking. With 225 miles of trials in a 15-mile radius, it’s an easy sell.

“We have everything from beginner to intermediate trails that go along our rivers, through our mountain valleys,” he says as he powers ahead. “Everything from expert trials with incredible elevation gains and drops. There’s a sense of pride when somebody from out of town comes to bike our trails.”

The city is a friendly, welcoming jumping-off point for upstate’s wilderness. 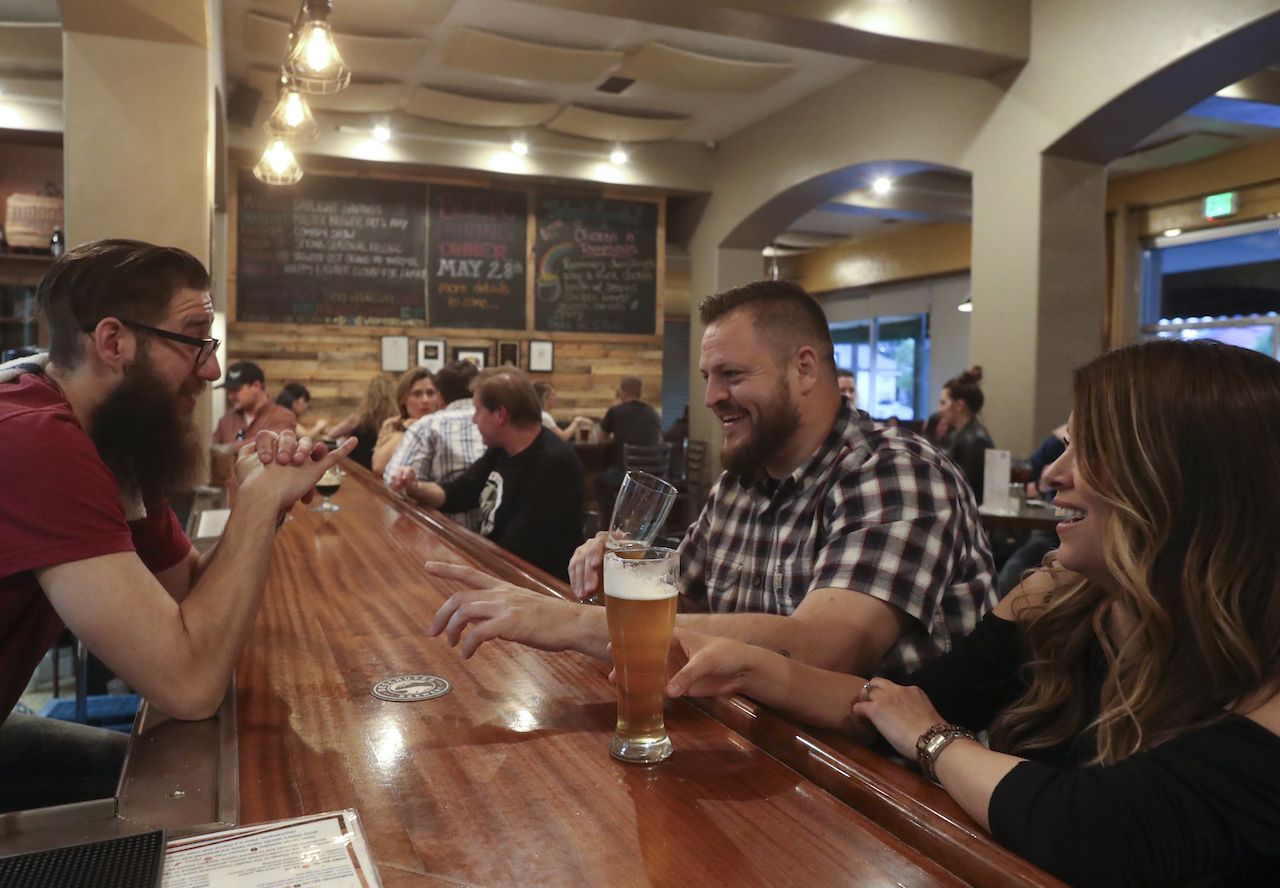 Redding is not a culinary destination, necessarily, but it still has enough fantastic food and things to do once you’re off the mountain.

Northern California breweries are almost a legal requirement in any city. Redding doesn’t disappoint with Woody’s, a brewpub with better beer than I’ve found at bigger names in this state. Final Draft Brewing downtown is also solid, and perfect for a drink after dinner.

Tacos are another California staple, and if you’re looking for the kind of cheap, authentic, shares-a-parking-lot-with-a-Chevron-station tacos that make the state famous, go a little past Woody’s to La Cocina del Chuy.

For higher-end stuff, go for cocktails and flatbreads at Mosaic, in the shiny new riverside Sheraton by the landmark Sundial Bridge. Or hit the Market Street Steakhouse, which grilled up the best small-town filet mignon I’ve ever had. 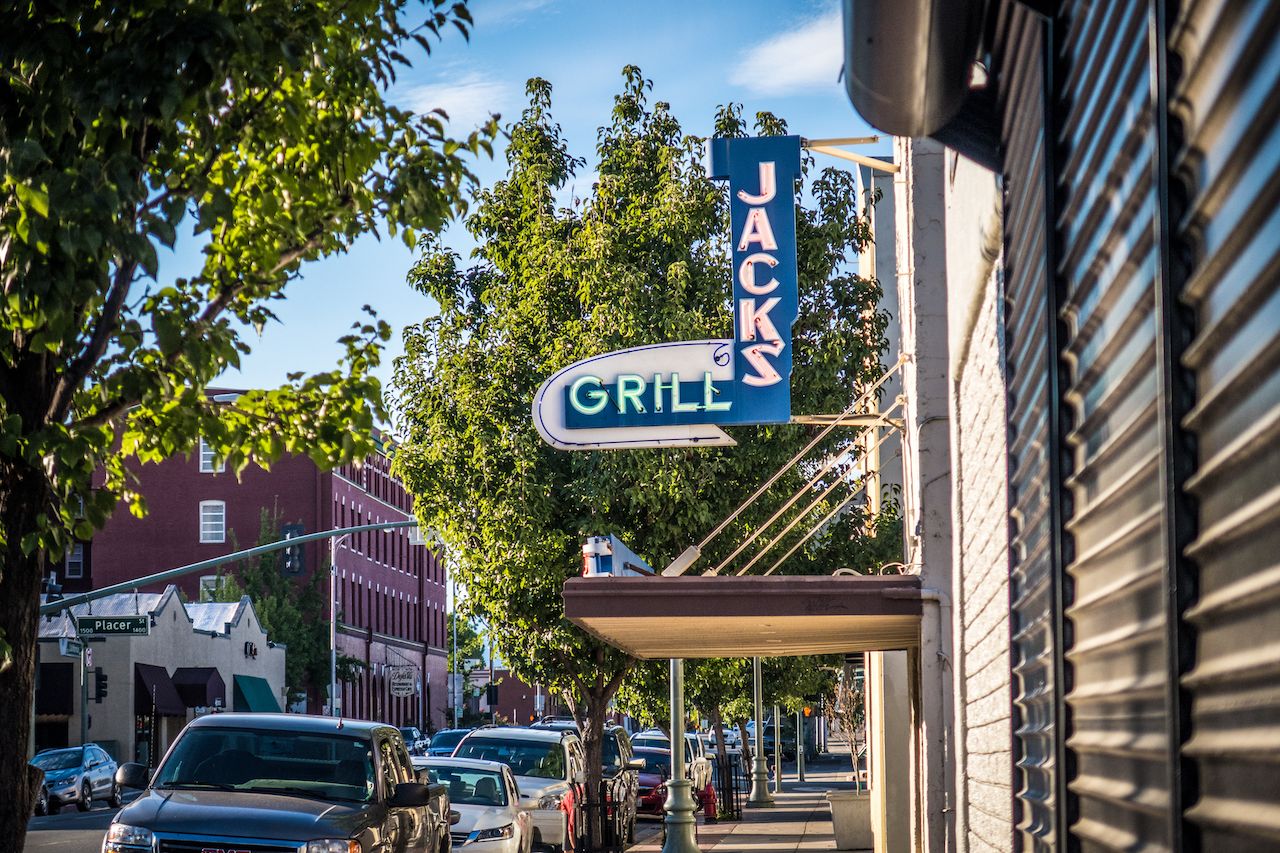 Locals, however, told me Jack’s Grill — the institution dive bar — had better steaks. Whether that’s true or not, Jack’s is worth popping in, if for no other reason than to share the bar with colorful, longtime locals. Because what made Redding feel so relaxing and natural was how the people treated me as a visitor.

My first night in town I had a bartender and three Market Street Steakhouse regulars ask me extensively about myself, then give me a slew of recommendations the tourism bureau hadn’t.

I met another Redding native who invited me to a house party where people were watching Jaws from a swimming pool. They were eager to share all the things they thought made their city great and enthusiastic to give me details on every question I asked. It was a welcomed departure for the sort of us vs. them attitude you sometimes find in California’s smaller outdoors’ destinations when tourists come to town. 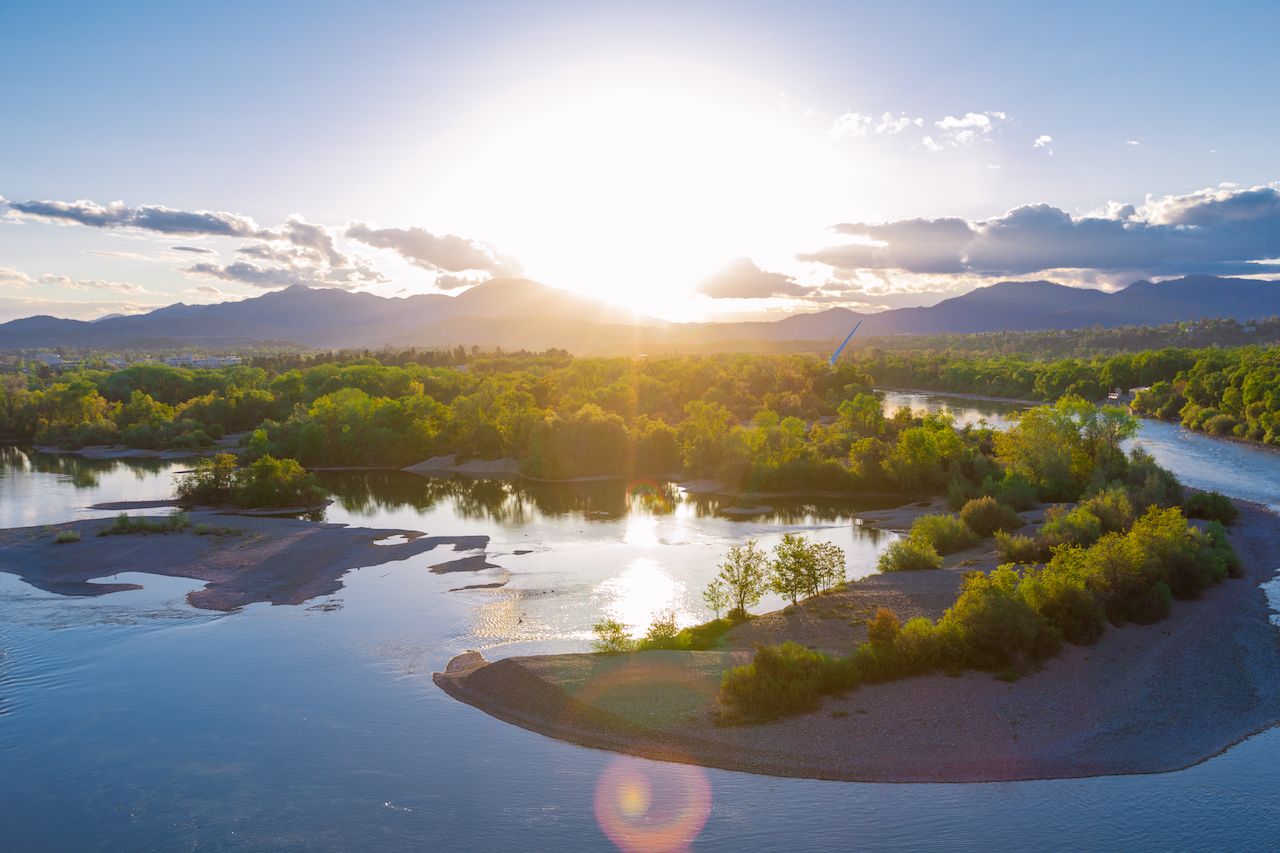 Those same locals warned me that while they were excited at the prospect of more visitors, some longtime Redding folks were not. And when that fancy new Sheraton opened on the river, they saw their quiet little corner of California slipping away.

That may be a bit dramatic — as of publication only San Francisco and LA have flights here — but as people look for new areas to explore, Redding may not always be the welcoming gateway it is now. But for now, even after the fires, it has some of the best wilderness in North America and may just be California’s last hidden outdoor getaway.

OutdoorHow To Have the Perfect Outdoor Weekend in Santa Barbara
Tagged
Outdoor Trip Planning
What did you think of this story?
Meh
Good
Awesome

The 8 Best Spots To Get Lost Outdoors in Redding, California