New Haven, Connecticut, is arguably the exemplar of the American food scene, offering international and organic cuisine, as well as local favorites. Few dispute New Haven’s fame as the birthplace of pizza in the United States – brought to these shores by immigrants from Naples, Italy, a century ago. Less well known is that the first hamburger was created there in 1895. And New Haven’s culinary story doesn’t end there. Immigrants from across the globe continue to bring new gastronomic offerings to Elm City. Add in a growing focus on sustainable ingredients, and it’s just about time to plan a trip to this leafy New England town for the restaurants alone.

These are the 11 best restaurants in New Haven, Connecticut. 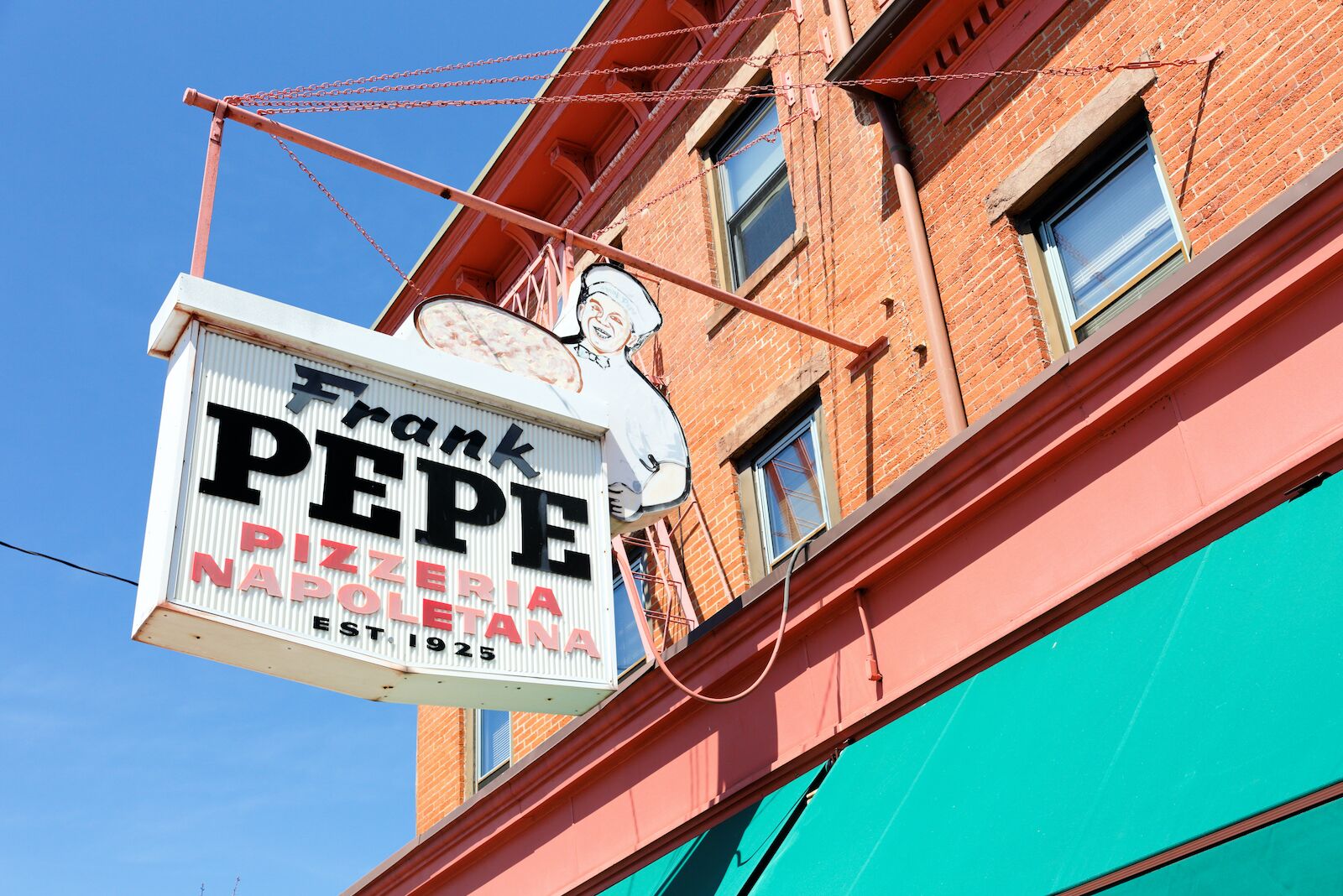 Rather than jump into the fray about who makes the best pizza, I reached out to a recent Yale grad who honed her culinary credentials working at such restaurants as Berkeley’s groundbreaking Chez Panisse. When Victoria Chen was stuck in New Haven during the COVID-19 summer of 2020, she and a couple of friends decided to complete the “full pizza circuit,” she says.

The “Apizza” in the name harks back to the Naples dialect of New Haven’s early Italian immigrants and their word for the Italian tomato pie. Sally’s has remained a family-owned restaurant based in New Haven since 1938, and that’s part of its emotional appeal for Chen, who contrasts that to Pepe’s, which is now a sizable chain (Sally’s has just one other location in the state).

On the culinary level, Chen says, “Sally’s sauce is more balanced.” She also likes its less-charred crust. But she emphasizes that her opinion is not shared by all. “My New Haven friends say they’re a Modern family or a Sally’s family,” she adds.

For all the “muttering about how Pepe’s is a big chain,” as Chen puts it, the pizza-maker has grown to more than a dozen locations across the eastern seaboard for a reason. And to the many who come to stand in line in New Haven to eat where it all began in 1925 – a decade before the competition opened its doors – the experience seems worth the wait. Although the Frank Pepe Pizzeria Napoletana started serving only tomato pizza a near-century ago, it eventually introduced the white clam pizza in a fit of immigrant ingenuity. Made with Romano cheese, fresh garlic, and parsley, rest assured that the white clam pizza is tasty – even if the sound of shellfish on your pizza sounds unappetizing to the uninitiated.

Modern is only modern in that it was founded after Pepe’s, but it in fact opened four years earlier than Sally’s in 1934, selling its first pizzas for 25 cents a piece. Modern switched to using oil when the coal byproduct that fueled New Haven’s pizza ovens was no longer available, but kept that high heat that makes for the signature charred crust of New Haven’s apizza pies. That one thing that really is more modern about Modern is that it loads up some of its pizzas with more cheese and more toppings overall, eschewing the restrained Old World approach that is traditionally sparse with toppings. The Italian Bomb is chock full of sausage, pepperoni, and bacon, with a touch of onions, mushrooms, and garlic, too.

If the meat-heavy Italian Bomb sounds appealing, then your next stop in New Haven should be at Louis’ Lunch, the first place where a ground beef pattie was placed between two slices of bread. You can get pretty much the same thing today, with patties cooked on the same cast-iron grills that have been seasoned with use for more than 120 years. The burgers come on a white bread toast with cheese, onions, and tomato. The condiments are up to you.

Chen says she appreciates that so many restaurants in New Haven are run by immigrant families, making for a plethora of flavors and dining that doesn’t bust your budget. In Chen’s view, the New Haven food scene “really reflects the city, and I really grew to love the city during my time there.”

Immigrants from Ethiopia, India, Japan, and Mexico, to name a few, have opened restaurants in New Haven. Many also run food trucks – with more than a dozen coming on weekdays for lunch to one corner of New Haven near the Yale ice rink. One food truck Chen is particularly fond of is the Portabella Latin Food Truck.

“It’s run by the loveliest couple,” Chen says. “There are other arepa spots in New Haven but there is something about that place. I think they’re the best.”

Arepas, by the way, are scrumptious Colombian or Venezuelan stuffed cornbread griddle cakes.

Where: Corner of Sachem and Prospect Streets; Monday through Friday from 11:30am to 2:30pm

New Haven has plenty of Indian restaurants, and you’ll eat well at all of them, but the ambience at Sherkaan is an extra plus. Inside, a ceiling full of bicycles and an up-close mural of an Indian train add an interesting vibe that reflects the Sherkaan’s Indian-street-food focused menu. A handful of outside tables also offers excellent people watching in this pedestrian cross-campus intersection. From the Punjabi samosas to the goat curry, every flavor excites.

September in Bangkok offers some Thai classics, like an excellent green curry or vegetarian pad Thai. But the kitchen offers up so much more to explore, like Thai tacos or a pulled pork pad see ew. The cocktail menu is also worth exploring – but only if you’re prepared to Uber back to your hotel if it’s not actually September when you are dining there. Come in January and the 15-minute walk back to the New Haven Green could feel longer.

As home to Yale University, New Haven has more than its fair share of cafes, bookstores, and cafe-bookstores. It’s also got plenty of places for quick snacks between classes or a late-night food craving.

Besides being a great independent bookstore, Atticus serves up some delightful breakfast options like a stacked avocado toast on tasty whole-grain bread. It got so popular as a place to grab a bite that last year Atticus opened a market in New Haven’s tony East Rock neighborhood.

Arethusa is a dairy farm in Litchfield, Connecticut, the hilly swath of the state that is sometimes known as the “other Berkshires.” The farm also has stores in a couple of lucky Connecticut towns, New Haven among them. While you could stop in for milk and yogurt, the real reason to drop in is for freshly made, ultra-sumptuous ice cream.

It’s not all noodles and snacks in New Haven. For a more upscale meal, two restaurants offer up fresh, season-based menus that pair better with a glass of wine than a draft beer.

Located across the street from the Yale University Art Gallery, Harvest serves Italian-inspired fare like beet and chevre croquettes, or lamb and wild mushroom linguine. Now a chain with three other restaurants in Connecticut, Harvest’s quality isn’t as consistent as it once was, but the service is always spot-on and the location – you can eat inside the cozy wood-paneled dining room or outside in a airy but protected nook down a set of stairs – makes for an enjoyable dining experience.

Heirloom wears its farm-to-table credentials on its sleeve – or at least in its name. The upscale restaurant inside The Study hotel offers tempting dishes like blistered shishito peppers and a butternut squash risotto. Some dishes sing while others only hum, but the ambience and decor befit the visiting lecturers and professors you may find dining here.

Tagged
Food + Drink Restaurants + Bars
What did you think of this story?
Meh
Good
Awesome