If you’ve long been curious to explore France’s storied southeastern region — from the lavender-filled fields of Provence to the hilly wine country near Lyon — consider doing so by boat. A Rhône river cruise gives you time to shop at bustling farmers markets, marvel at medieval palaces, and meander through vineyards while getting you to your next location by night. Rather than fretting about early check-outs, train schedules in French, or car travel down small winding roads, you can sleep in and wake up to find your boat docked right alongside the next cobblestoned town. Here’s what a Rhône cruise can look like — and how to make the most of it. 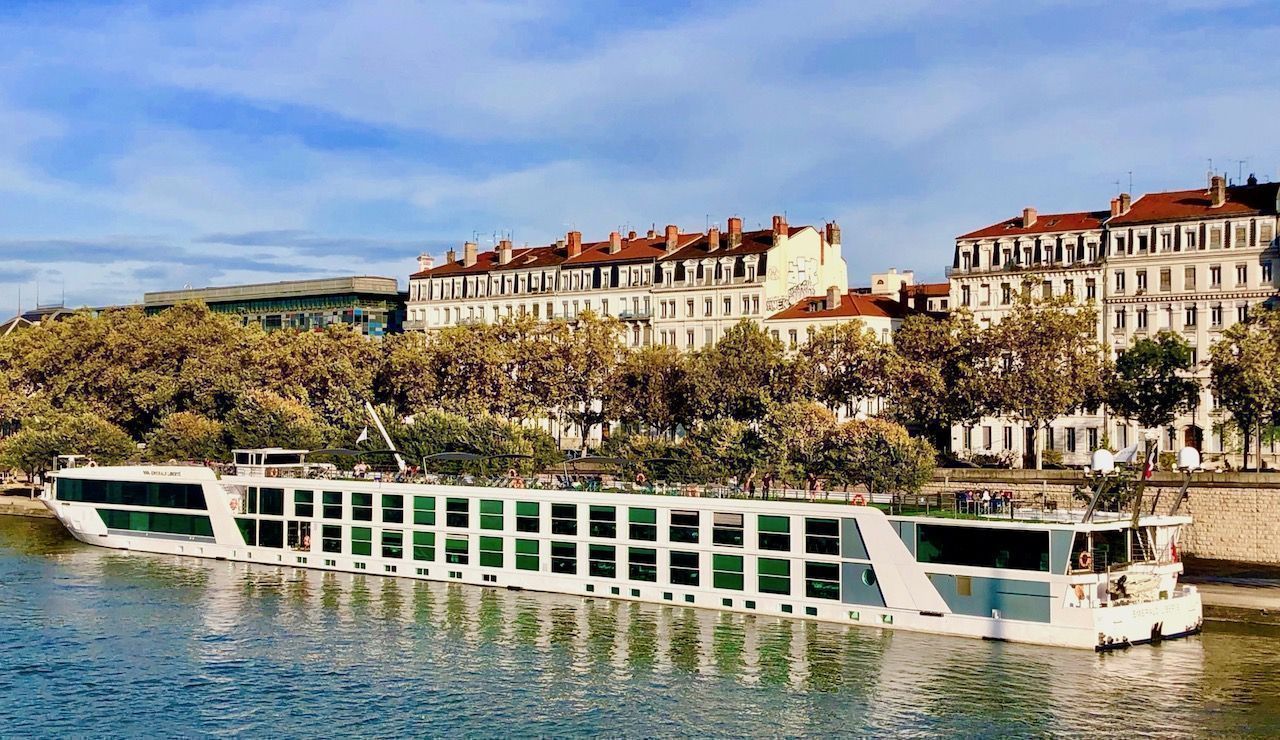 My husband and I chose an Emerald Waterways cruise, which took us over eight days from Arles in Provence north on the Rhône river to Lyon and finally to Salon-Sur-Soâne in Burgundy. We flew into and out of Nice and had transfers to and from the boat that are complementary on embarkation and disembarkation days. We opted for Emerald, which started offering its first cruises in 2014, because it looked like the best value for money.

Emerald Waterways has eight ships, which offer all-inclusive pricing covering all meals, on-board gratuities, and daily morning tours plus their gratuities. With a three-to-one ratio of guests to crew members, service is top-notch. It’s also the only river cruise line that comes with a heated pool under a retractable roof. Come evening, though, the floor rises through the pool’s surface and transforms the area into a movie theater serving complimentary popcorn.

Optional “DiscoverMore” tours offered at the ports of call cost extra, but you can easily launch out on your own instead. Onboard classes range from yoga on the pool deck to water aerobics and Pilates. Besides free WiFi, wine, beer, and, of course, soft drinks are also offered with your meals at no additional charge.

If you fly into Nice, take time to explore France’s second city 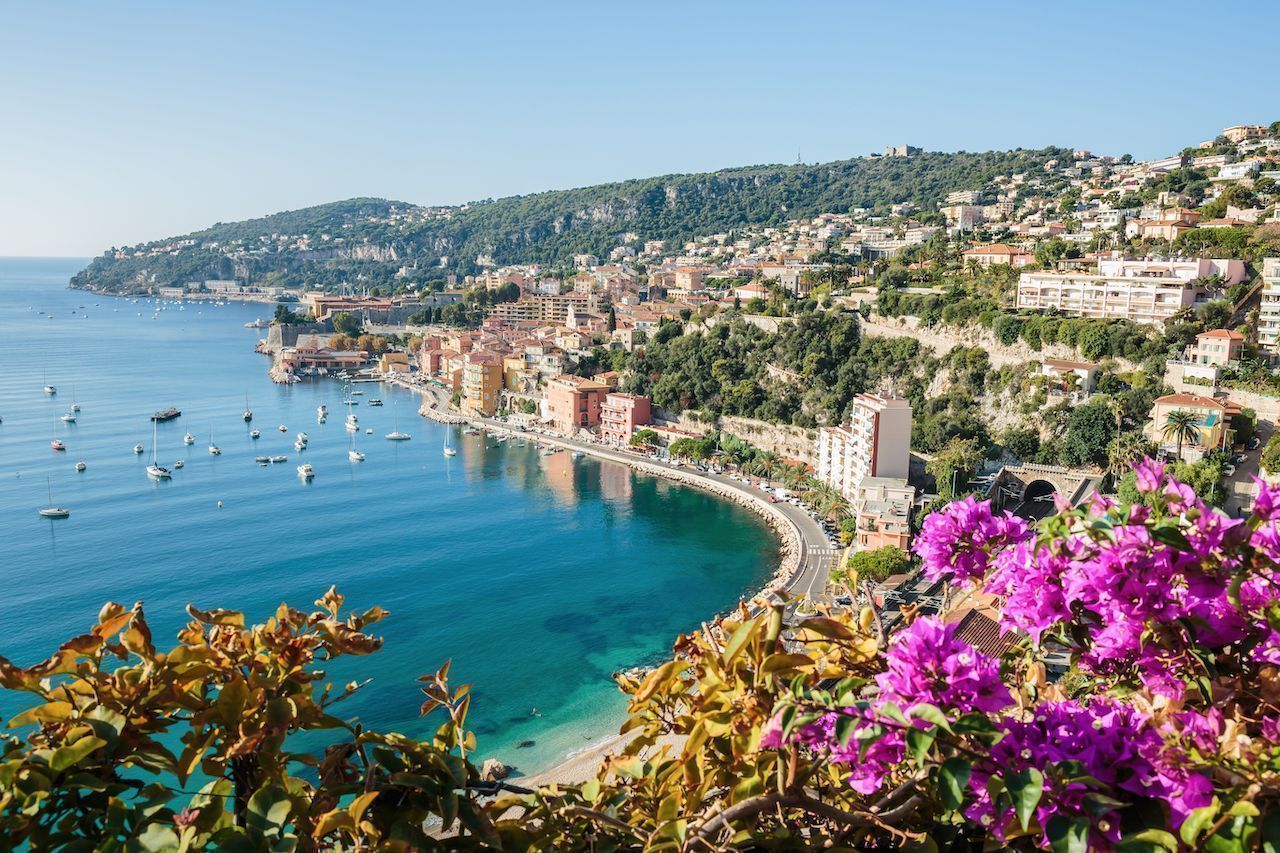 Nice is France’s top tourist destination after Paris, so it’s worth taking a day to enjoy this vibrant Mediterranean coastal city before taking your complimentary transfer to Arles. Nice was under Italian rule until 1860, and you can see French and Italian traditions intermingle in the architecture, boutiques, and authentic “Cuisine Nissarde” restaurants. Restaurants that use the ingredients and recipes of the region’s imitable cuisine receive Cuisine Nissarde certifications that they proudly display in their windows. Once such establishment, A Buteghinna in the heart of Vieux Nice (Old Nice) uses only seasonal ingredients from small, local producers to make dishes like summertime stuffed zucchini blossoms or a baked cod with aioli.

At Cours Saleya, one of the country’s most renowned markets, you’ll find fresh flowers, spices and soaps, olives, Corsican cheese, and sausage and lavender products from Provence. You might want to sample traditional crepe-like socca, a dish that’s Italian in origin and made with chickpea flour, olive oil, salt, and water; it’s grilled streetside and served piping hot.

After the market, you can stroll Nice’s famed Promenade des Anglais, a lovely boulevard running alongside the seriously blue Mediterranean. Climb the steep steps up historic Castle Hill for bird’s-eye views of the coast. If you have time for even one of the city’s 19 museums and art galleries, the highest concentration after Paris, you’ll barely have scratched the surface of this remarkable city.

Stand where van Gogh painted, seeing what he saw 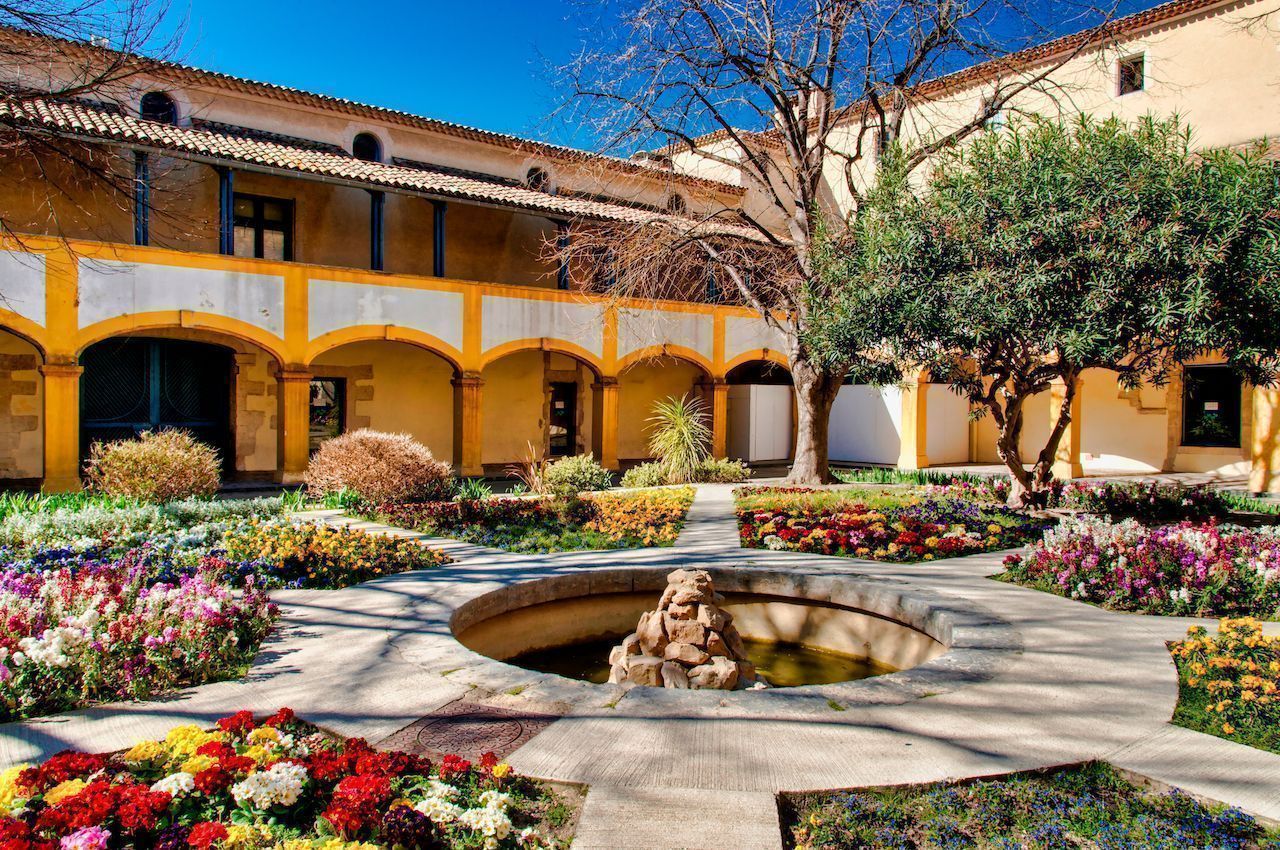 You’ll get in the ship at Arles, a city best known for its renowned former resident, artist Vincent van Gogh, who left Paris and painted prolifically from 1888 to 1889 while living here. After a fight that severed his friendship with fellow-artist Paul Gauguin, van Gogh infamously cut off his own ear and delivered it to a prostitute. Reproductions of van Gogh’s paintings are displayed at the approximate spots where he set up his easel, including well-recognized “Starry Night over the Rhone,” painted from the river embankment, and “Garden of the Hospital in Arles” where van Gogh checked in after the ear incident.

Beyond van Gogh, Arles is famed for its well-preserved Roman ruins, as it was one of the Roman Empire’s early conquests in 125 BC. Among the ancient relics are a coliseum with some 60 arches that originally held 26,000 spectators, although the third-tier seating didn’t survive the elements. From April to mid-October, the arena still hosts bullfights that began during the Roman era.

In Avignon, see France’s turn as the seat of the pope 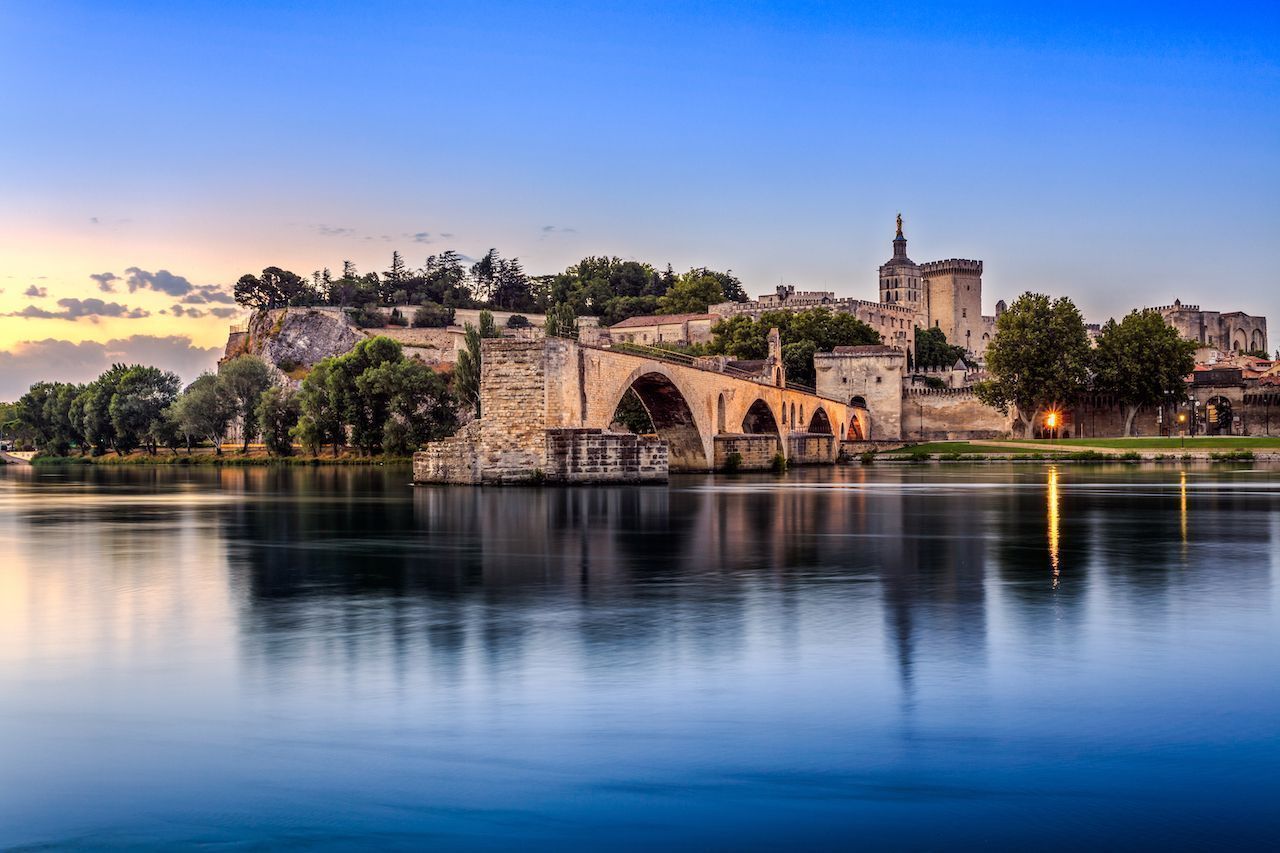 For nearly 75 years during the 14th century, Avignon — with its legendary half-bridge, Pont d’Avignon– belonged to the popes, not the French. Evidenced by the sprawling UNESCO World Heritage Palais des Papes, a stunning Gothic structure that was added on to by each successive pope. For another 39 years, competing popes lived in both Avignon and Rome, although Rome eventually held onto the papacy. You can visit the Palais de Papes on your own with an iPad audio tour that’s included in the price of entry or take part in a guided tour. Back in the 14th century, water was not very clean, so popes drank several liters of wine daily — although it was more like cider. Nonetheless, the region became known for its wines during the papal period, and its wines have only improved since then.

After the Romans conquered the northern Côtes du Rhône region, they began planting vineyards. An on-board tasting led by L’Hermitage Vineyards showcases their full-bodied reds before passengers disembark to hike through the vineyard. Côtes du Rhône claims to be the birthplace of Syrah wine.

Backed into the granite hills, and on opposite sides of the Rhône River, the towns of Tournon and Tain L’Hermitage are connected by a pedestrian suspension bridge, one of the few that survived WWII. Past the bridge and above the town, terraces stairstep the hillside. A knowledgeable guide will lead you along paths paved with river stones, where monks, weary from the crusades, settled and grew vines around the chapels they built. Today, L’Hermitage Vineyards bottles some of the most famous labels in France, which were the official wines in the courts of King Louis XIII and Louis XIV. Before returning to the ship, you’ll stop at Valrhona’s Cite du Chocolat where the samples are plentiful, and no one leaves without their chocolate fix.

Cycle along the banks of the Rhône 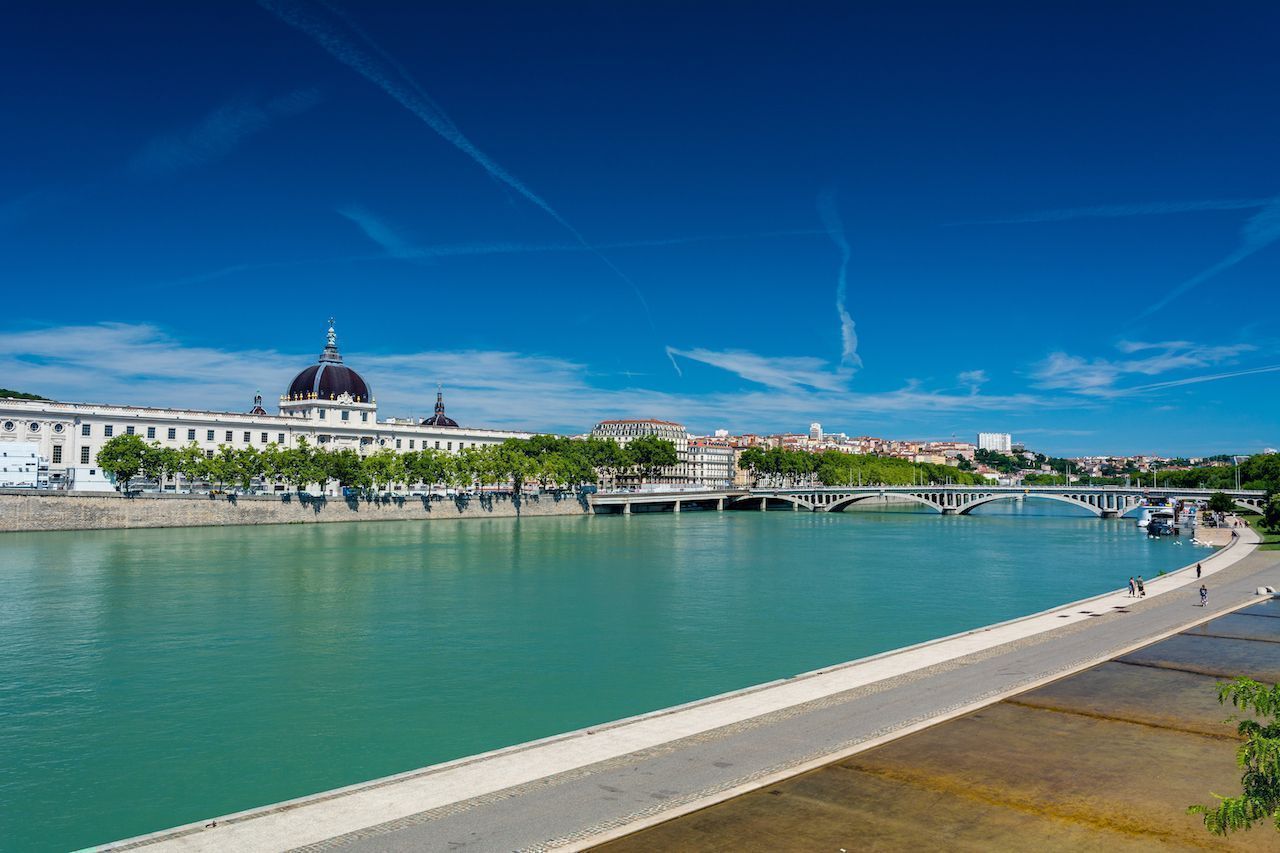 Complimentary bikes on board make it easy to ride through the quaint river towns, such as in Tournon, where a paved path hugs the water from Arles all the way to Geneva. Hiking and canoeing, depending on the destination, might also be on the itinerary.

The bike tour in Lyon, the final stop on the cruise, starts from the ship and takes advantage of the brilliant mile-long Tunnel de la Croix-Rousse. The largest tunnel in Europe dedicated solely to pedestrians and cyclists, it’s illuminated by colored lights, video displays, and music for entertainment. Next, you’ll head to Parc de la Tête d’Or, a sprawling urban park where you can tour the zoo, botanic, and rose gardens, and also take a rowboat onto the lake. As you pedal by the Saône and Rhône Rivers that divide the city, your local guide will point out history and chat about daily life. On the cobblestoned streets of Vieux Lyon (Old Lyon), your guide might stop to lead you through its famous traboules, covered lanes and passageways between the buildings that serve as short-cuts and were used as escape routes by the French Resistance during WWII.

Afterward, spend the afternoon like a local beside the fountain in Place Bellecour while listening to a talented, street performer. Take home a box of bouchons de Lyon, chocolates wrapped to look like wine corks that are unique to this city.

Savor the cuisine these regions are famous for 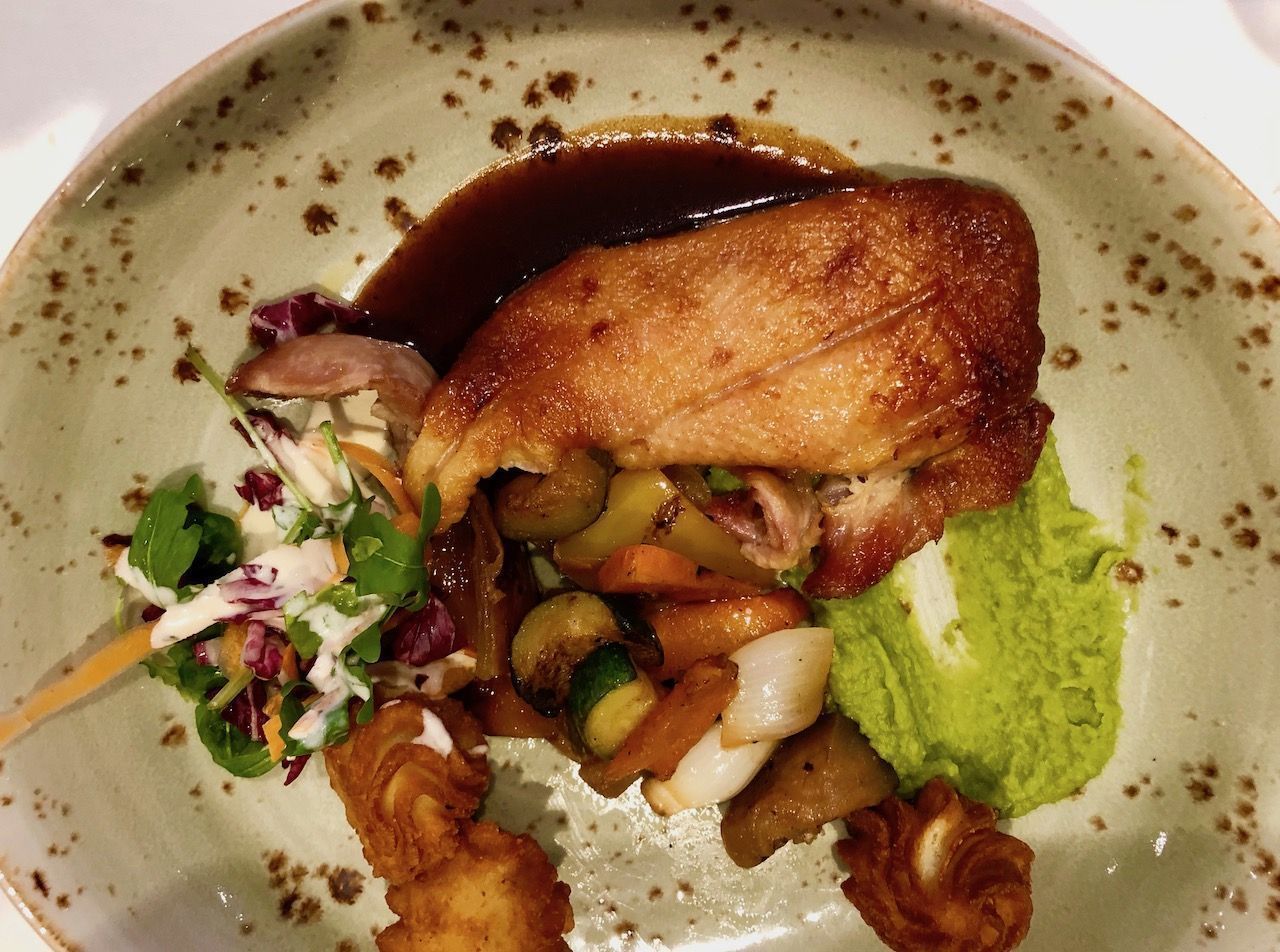 Executive Chef Teo Petre and his brother, who also works for Emerald, won 2018 Best Chefs of the Emerald fleet. Each evening, Chef Teo presents the chef’s entrée and shares his knowledge about the regional wines and cuisine on the menu, such as beef bourguignon, coq au vin, duck, escargot, and French terrines. Poured liberally at dinner, regional red and white labels, alongside German beer, include the famed L’Hermitage reds.

Each sailing, a local celebrity chef comes aboard to share his signature dishes. While in Avignon, Fabien Morreale, a finalist of Top Chef France, executed an excellent three-course dinner featuring a crudité salad; beef confit cooked for eight deliciously slow hours and finished in truffle sauce; white fish served with beurre blanc accompanied by carrot puree; and, for dessert, his grandmother’s olive oil cake. Crusty bread, made with flour milled near his Marseille restaurant, and regional wines rounded out the menu.

Unplugging and relaxing aboard the ship 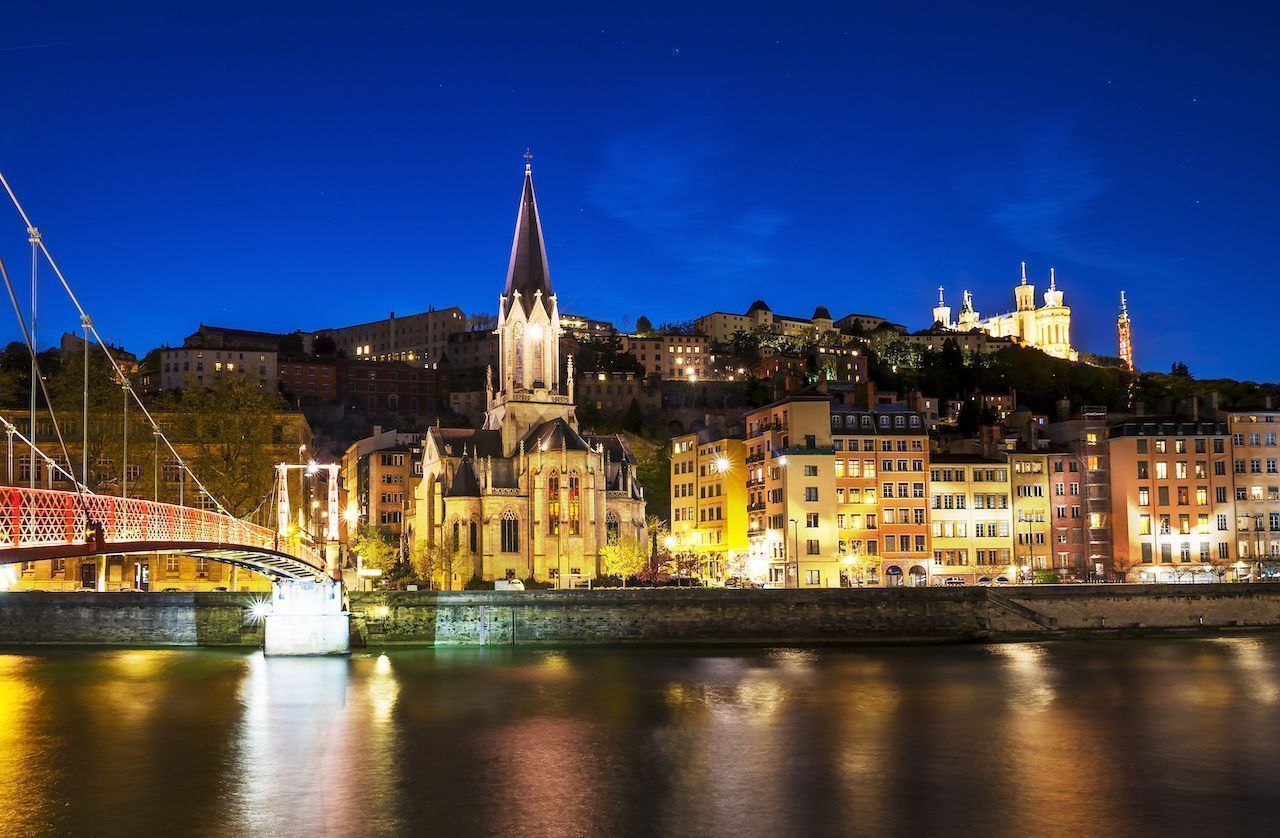 The cruise we took travels through numerous locks, primarily in the evenings so as to give you maximum time for exploring during the day. The only time it sails by day is Lyon to the northernmost stop at Salon-Sur-Soâne — although some other Emerald Waterways itineraries do spend more time cruising by day, if that’s what you’re looking for. When you are back on board after an afternoon of exploration, you can spend the pre-dinner hours with a good book, or sipping a cocktail poolside. Or you could even take a dip in the pool before the floor comes up to turn it into a movie theater.

A featured movie, with popcorn, is shown every night on the big screen at the pool deck. But since time aboard the ship is all about chilling out, you could also catch a movie on your room’s TV. Spa treatments range from salon services to massages, and there’s even a small fitness room. In the evenings, this is not a massive ocean cruise with big, bright shows. Nightly entertainment is more focused on the region’s fantastic culinary offerings, with multi-course dinners and excellent wine, and maybe a local musician adding to the atmosphere. You can always sleep in the next day and still have plenty of time to explore.

How To Have Your Very Own Aquarium Pool in France