I’ve never been one to line up around the block to get a table at a hot new restaurant. The longest I can remember waiting for a meal was a little over an hour at an unassuming seafood restaurant in Setúbal, Portugal, last summer. It wasn’t so much a line I found myself waiting in but a mass of unhurried locals who knew something I didn’t: The meal I was about to have was worth any amount of wait because once you sat down, you could stay for as long as you wanted — and eat as much grilled fish as your stomach would allow.

My partner and I decided to try the restaurant, Bombordo, on the recommendation of his Portuguese colleague. Our instructions were simple: Head to Rua do Clube Naval next to the port in Setúbal and choose from one of the many restaurants lining the street that specializes in “rodizio de peixe.”

Rodizio de peixe roughly translates to “fish carvery.” It describes a type of establishment that’s commonly found along the coast in central and southern Portugal where fish is grilled and served to customers at a fixed price. It also describes a type of meal akin to an all-you-can-eat buffet, only instead of putting the onus on diners to load up plate after plate of the catches of the day, rodizio de peixe entails all-you-can-eat table service — an endless pipeline of freshly caught fish.

When we finally got seated at one of the plastic tables that had been set up outside beneath a bright red overhang next to the slightly more formal dining room, we scanned the Portuguese-only menu and deciphered that diners had the option of ordering a la carte or opting for the rodizio to peixe, which cost 11 euros for adults and 5.50 euros for kids. Included in the price were bread and olives as starters; boiled potatoes and a garden salad as sides; a glass of water, juice, or soda; and a post-meal coffee. Looking around, we noticed that the majority of the diners were participating in rodizio de peixe, with one notable addition: Virtually every adult there was drinking a large pint of beer, or caneca, from a hefty handled mug.

When our waitress arrived with our bread and olives, she also set down three empty plates: one in front of each of us and a third off to the side. A few minutes later, a different server began circulating the dining area with a platter of sardines that were almost the length of my forearm. When he got to our table, he simply looked at us, clarified “sardinha” while nodding to the platter, and waited for our response: a nod “sim” if we wanted one or a shake “não” if we didn’t.

This continued for the duration of our meal. Every 10 minutes or so, a server would make the rounds with a different type of fish, all grilled whole. We must have sampled four or five species each, nodding yes to every platter that passed by as the bones of the previous offerings piled up on our plates. This, we discovered, was the reason for the extra plate.

Much of what we were eating got lost in translation, but according to Bombordo’s website, mackerel, multiple species of sea bream, white and black swordfish, and a mild-tasting fish called corvina are commonly included in the lineup. Salmon, cuttlefish, and squid are also advertised, though we only saw white fish while we were there. 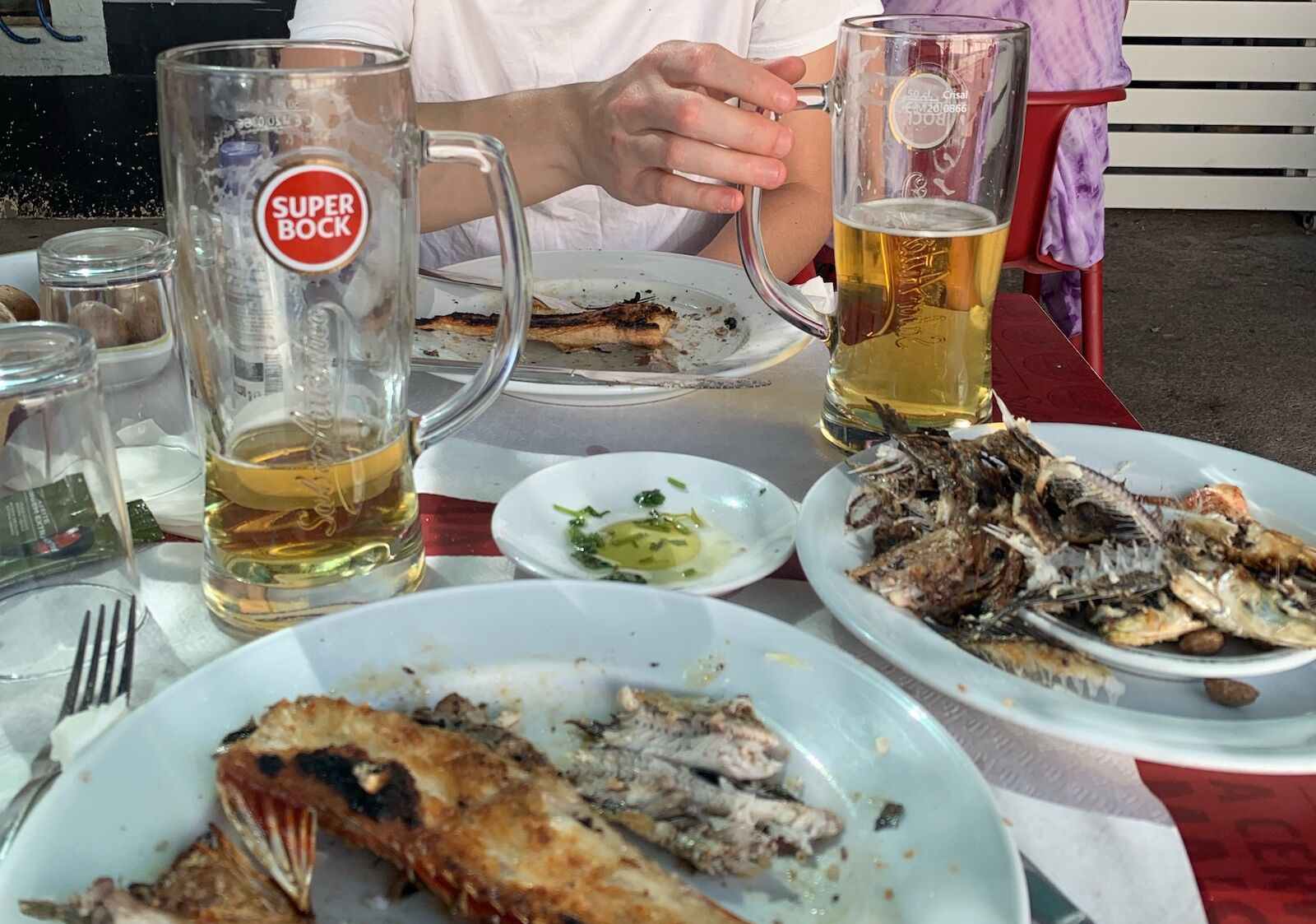 As many as 16 different species could make an appearance during a single rodizio de peixe session at Bombordo, and diners are guaranteed the chance to try at least nine different types. That number is particularly impressive considering the size of a restaurant like Bombordo, which I’d estimate has the capacity for at least 100 guests. Even more impressive is the wall of grills lining the back wall of the restaurant, where the grillmasters prepare dozens of fish at once a few feet away from the cases where the yet-to-be-cooked catches sit on ice. 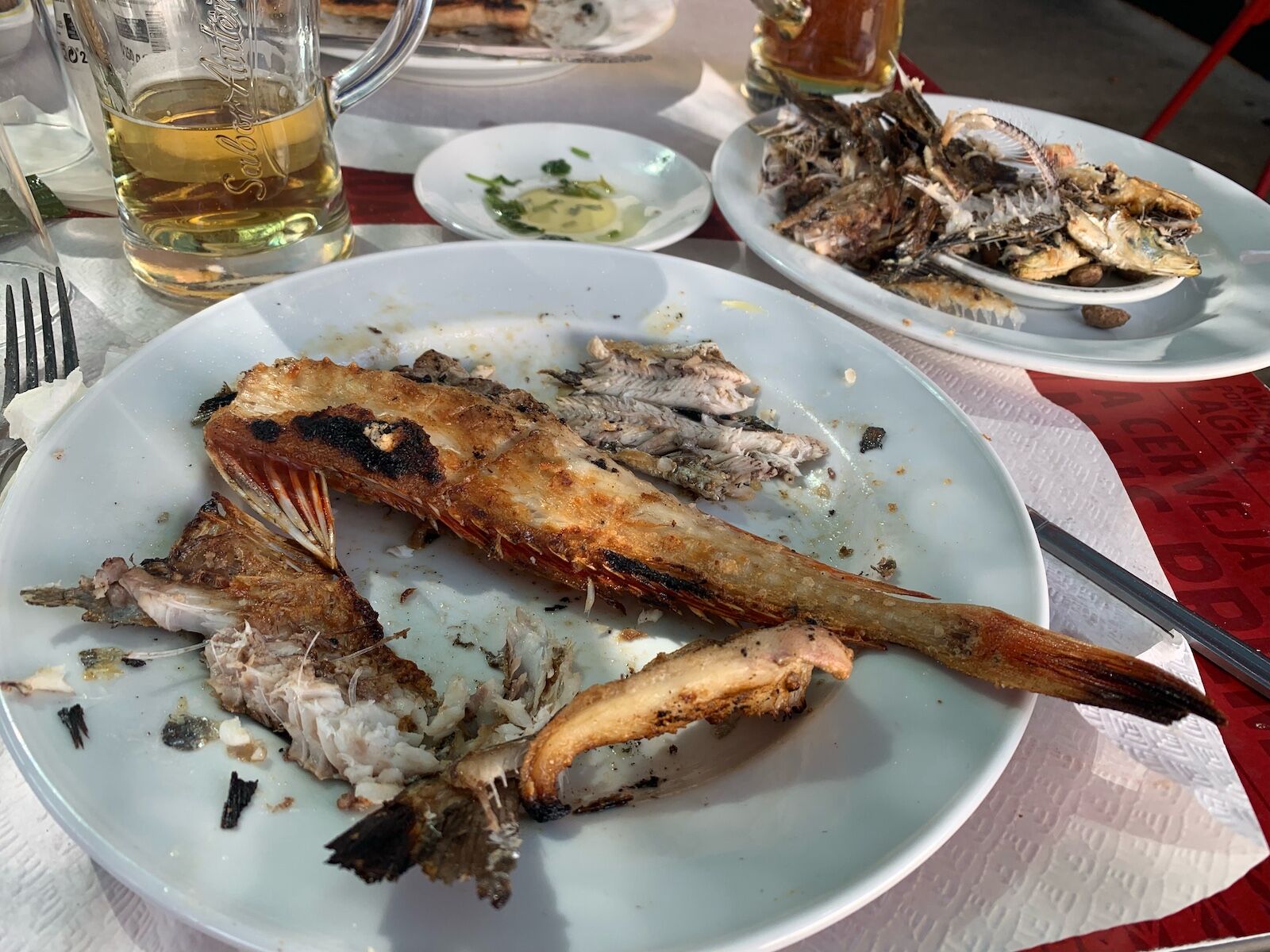 I’d like to say that the accompaniments we were served had a memorable impact on the overall meal, but the truth is that once the seafood procession began, we neither had the room nor the will to eat much of the sides. The few bites of salad I had were fresh and acidic, acting as a palate cleanser, but I was happy not to fill up on bread and potatoes. After all, rodizio de peixe is all about the peixe.

Seafood, in general, is essential to Portuguese culture. Salt cod, or bacalhau, is the national dish. Octopus, clams, and shrimp feature prominently in petiscos, Portugal’s signature small plates. In Lisbon — whose greater metropolitan area, which includes Setúbal, ranks first in the “regional distribution of the volume of catches” according to the USDA’s Foreign Agriculture Service — simple seafood restaurants like Cervejara Ramiro double as cultural landmarks, and the tinned fish sold at conserveiras make for some of the best souvenirs.

Portugal consumes more fish per capita than any other country in Europe, and the Portuguese fishing industry generates hundreds of millions of dollars each year while employing the fourth-largest number of people of any European nation.

Rodizio de peixe is one way to celebrate Portugal’s seafaring heritage. I can’t speak to the experience at every restaurant in Setúbal, but Bombordo is now my number one recommendation for seafood restaurants in the Lisbon area, even more than Bourdain-endorsed Ramiro. Our table wobbled as if unable to bear the weight of the carcasses we’d gleefully collected, our servers seemed occasionally annoyed at our table’s lone inability to speak Portuguese, and I broke the rule I’ve long heeded that no restaurant is worth anything close to an hour’s wait. But I wouldn’t have changed a single thing.

So, if you ever find yourself in central or southern Portugal, and you encounter a large group of locals huddled around a nondescript seafood shack with grills ablaze and mounds of fish making the rounds, take my word for it and get in line. The meal you’re about to have is worth whatever wait you’re about to face.

Travel7 Perfect Portuguese Towns That’ll Make You Forget All About Lisbon
Tagged
Food + Drink
What did you think of this story?
Meh
Good
Awesome