When you’re falling towards the ground at 165 miles an hour, you really don’t have time to think about everything that went into making that terrifying moment happen. In the adrenaline-pumping moments riding a big-time roller coaster, it’s hard to imagine it was all carefully planned out years ago by a team of creative designers.

But roller coaster thrills don’t happen by accident, and the people who design every loop, bank, inversion, and drop spend literally half a decade crafting your experience. We chatted with Jeff Havlik, a roller coaster design expert with renowned design firm PGAV Destinations, who has designed such coasters at the Manta at SeaWorld Orlando and the Parrot Coaster at Chimelong Ocean Kingdom in Guangdong, China. He gave us some rare insight into the action-packed world of roller coaster design.

Finding a story and theme to match a park’s objective 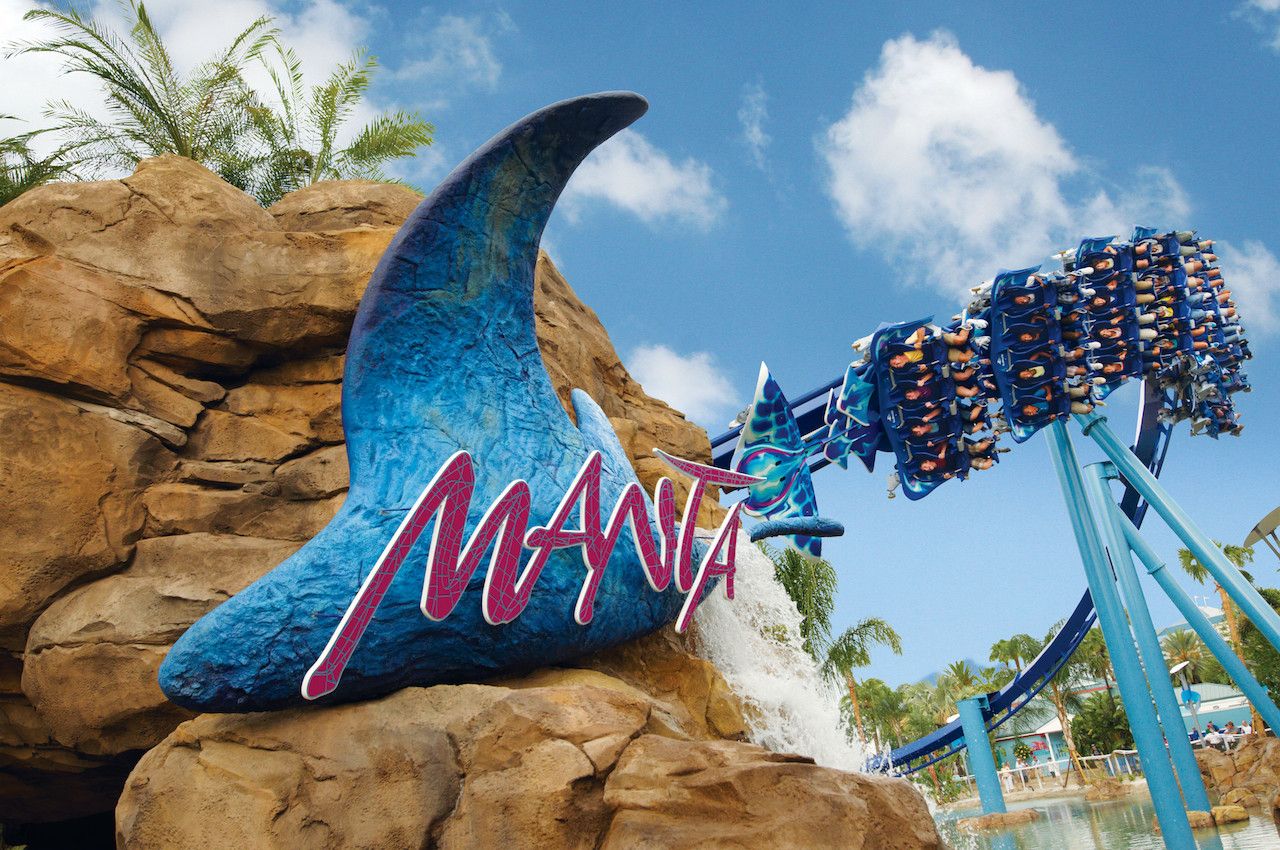 Before doing anything, designers work with park owners to figure out what, exactly, they’re trying to accomplish with a ride. Are they trying to rebrand themselves as a thrill park? Outdo the crazy coaster at a competing park? Bring in a new demographic?

When PGAV designed a new coaster for SeaWorld, for example, the aim was to appeal to the “teen veto” factor where adults and small children would want to visit the park, but teens would reject the idea because there was nothing for them to do.

“This was how we developed Journey to Atlantis,” Havlik said of SeaWorld’s first adult-oriented coaster. “It was designed to have a rich storyline and an aquatic theme but be thrilling enough teens would want to ride it.”

From there, designers develop a storyline to run throughout the ride, beginning in the queueing area, continuing to the boarding station, onto the ride itself, and into the exit/gift shop.

“One of the best examples of that is the Manta Ray at SeaWorld,” Havlik said. “We started by figuring out how to tell the story of ocean and rays. So we had the queue go through an extensive ray exhibit so people could see how they glide, move, and interact. Then we wanted to translate that feeling of flying through the water like a manta ray on the ride. But you’re flying through the air on a coaster.”

So Havlik and his team developed a flying coaster, one whose track is above the rider to give the sensation of flying. Though it’s not a particularly aggressive ride, the two-minute-and-36-second ride takes guests gliding, diving, and looping like a ray might in the ocean.

Designing a roller coaster for everyone — even people not riding 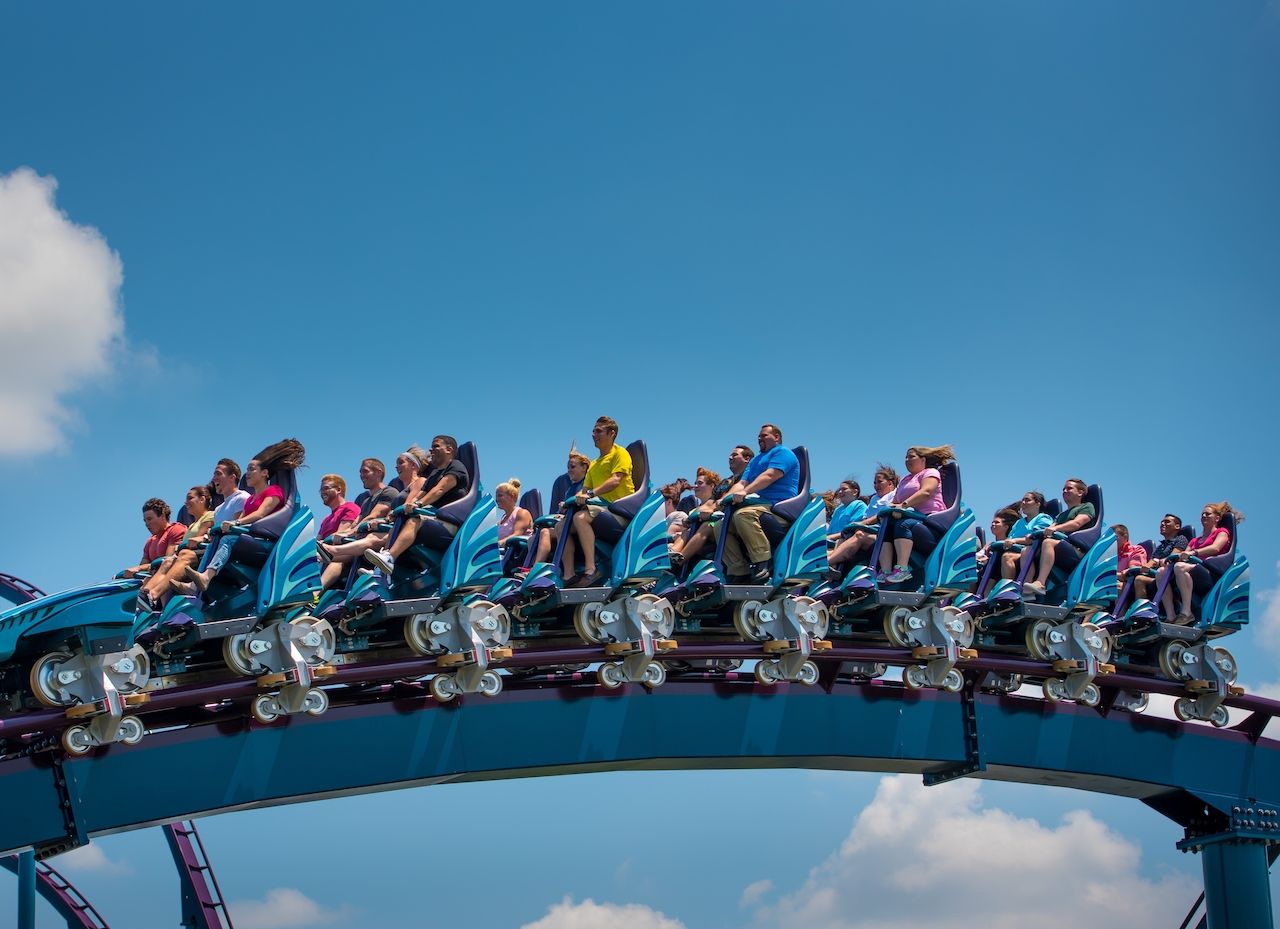 Roller coaster riders make up as little as 20 percent of guests at a theme park, and they rarely comprise more than half. Which means a good coaster must also capture the imagination of those not riding it.

“One of the things we think is very important is not excluding the people who don’t ride the ride,” Havlik said. “With Manta, you can see the same aquarium queued riders see in a separate line. At the loop right after the drop, the ride goes right into a trench, and if your family is standing there, they can see you and take your photo.”

The ride’s signature move, a “wing dip” where the coaster appears to skim across the water spraying water in all directions, isn’t even visible to riders as the water actually follows the cars. It’s meant entirely for the spectators.

Pacing a ride though the art of anticipation

Once the storyline and aesthetics are finished, designers begin looking at how the ride will flow.

“We don’t want to do full-out scream experiences, where you’re disoriented the entire time,” Havlik said. “We look at it more like creating a symphony, with rises, falls, and crescendos.”

To do that, designers play on the psychology of anticipation.

The anticipation builds as the riders stand in line, engulfing them in the story they are about to experience. It continues in the boarding station, as they’re purposefully meant to see other people finishing the ride, looking exhilarated and wind-blown. This both builds anticipation and subtly instructs riders on how to enter and exit the coaster to make the process faster.

Next comes the “lift,” or the first big build of the ride. It’s meant to make the ride feel like it lasts longer and hold that giddy, nervous sense of, “What’s going to happen next,” so when the big drop does come it feels even more intense than if you’d shot straight into it.

From there the coaster is meant to mimic life, with highs, lows, and lulls in between. But it can’t be all twists and turns, nor can it be a gentle careening trip through the park.

“There’s a balancing act,” Havlik said. “It’s a symphony of anticipation and surprises. You’re not always telling the guest what’s gonna happen but also not making them uncomfortable. Not knowing what’s coming next means you can’t brace for it, so that adds to the thrill factor. But it also adds to the uncomfortable-ness of the ride.”

Instead, designers pace the ride with precise detail, leaving intense moments followed by moments just long enough for you to process what you’ve been through before careening through another corkscrew.

Using human water bottles to make sure it works 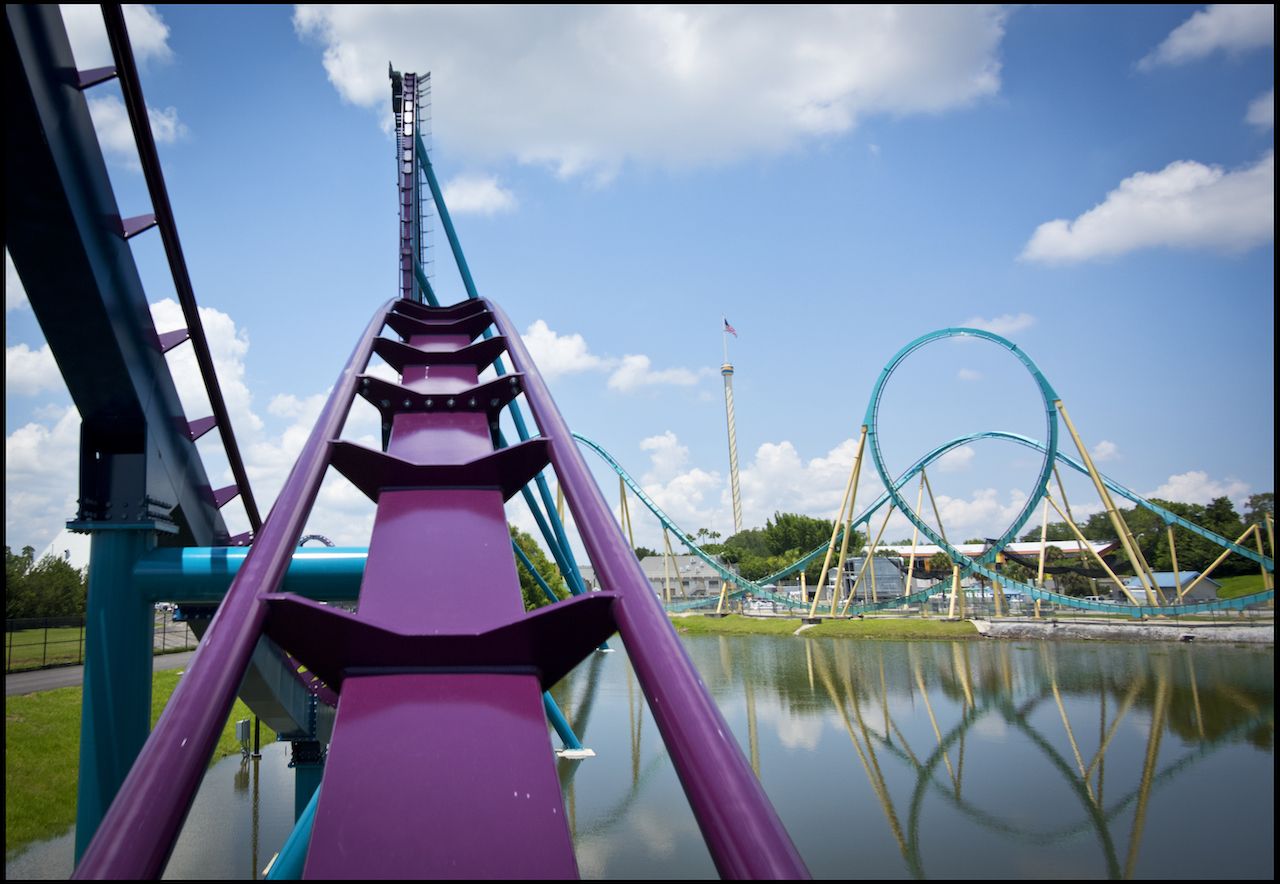 After the pace of the ride is set, designers determine how the coaster will fit on the site, where each element will be, and how it will work with the park and its pathways. They’ll go over it with the park owners, then with the ride manufacturer, which makes its own adjustment. The plan goes back and forth two or three times before settling on a final.

Once everyone agrees on a design, PGAV creates a 3D model so owners can “ride the ride” in a mocked up environment called “The Hive.”

After that’s approved, manufacturers go through a series of structural calculations, figuring out things like the amount of G-forces that will be on each guest and how much steel is needed for the desired columns. Once they complete calculations, the manufacturer begins making track sections, assembling columns, and putting together all the pieces that will someday make a roller coaster. Everything is constructed over several months and shipped piece by piece to the coaster site.

Over the next few months, the coaster is assembled on site, then must undergo two to three months of testing before a single person is allowed on. Testers use water bottles meant to simulate human bodies to examine the effects of gravity on potential guests, and the ride must go through a predetermined number of testing hours before it can be certified by the American Society of Testing and Materials (Europe and the Middle East have their own certification body, the TUV).

“It’s also a breaking-in period, like sitting in a new leather chair that feels kinda hard, then after a while it conforms and feels comfortable,” Havlik added. “Same thing with a coaster. Brand new wheels, bearings, everything is all tightened up; it doesn’t run as smoothly until it’s gone around the track several hundred times.”

After the coaster is tested and broken in, it’s ready for its first riders. The entire process takes anywhere from three to five years, from inception to opening, and sometimes puts parks in the hole $30-60 million before a single person steps onboard. Think about that the next time you wonder why your admission ticket is $100.

These figures, Havlik said, are for custom coasters made with existing technology. Coasters that duplicate existing rides with slight modifications for space will take less time. Prototypical coasters like the ones found at Disney parks and Universal Studios can take up to eight years. All of them are expensive.

But when you’re being hurtled upside-down high above the Ohio countryside, none of that seems to matter. It’s a long journey from idea to thrill, but for those brief couple of minutes, it all seems worth it. Just remember the next time you’re sweating through a hot afternoon on a roller coaster line that you’re not the only one who put in hours for this all to happen.

NewsNew Jersey Six Flags is getting the longest, fastest roller coaster in the world
Tagged
Theme Parks
What did you think of this story?
Meh
Good
Awesome

The wildest pavilions on display at Expo 2020 Dubai right now
12 destinations that inspired the world’s most famous writers
The 8 best movies and shows to watch before going to Paris
Experts reveal their best tips on how to stay safe at a concert
Flight prices are expected to shoot up this year. Here’s when you’ll see the biggest increase.

The 10 most expensive parking fees at US attractions

On your visit to Orlando, you should actually stay (and eat) in Kissimmee

A full-sized Titanic replica is under construction in China

Planning a trip to Disney? Here’s a quick guide to each park’s COVID-19 protocol.