America often seems to have a monopoly on dramatic fall road trips, but Europe boasts many scenic drives to rival those of New England. Autumn lovers can see the russet foliage of redwoods and oaks in England’s forests world-famousn leaves of Portugal’s vineyards. Other European routes pass romantic castles, whisky distilleries, and world-famous art. Here are eight of the most scenic drives through Europe to take this fall. 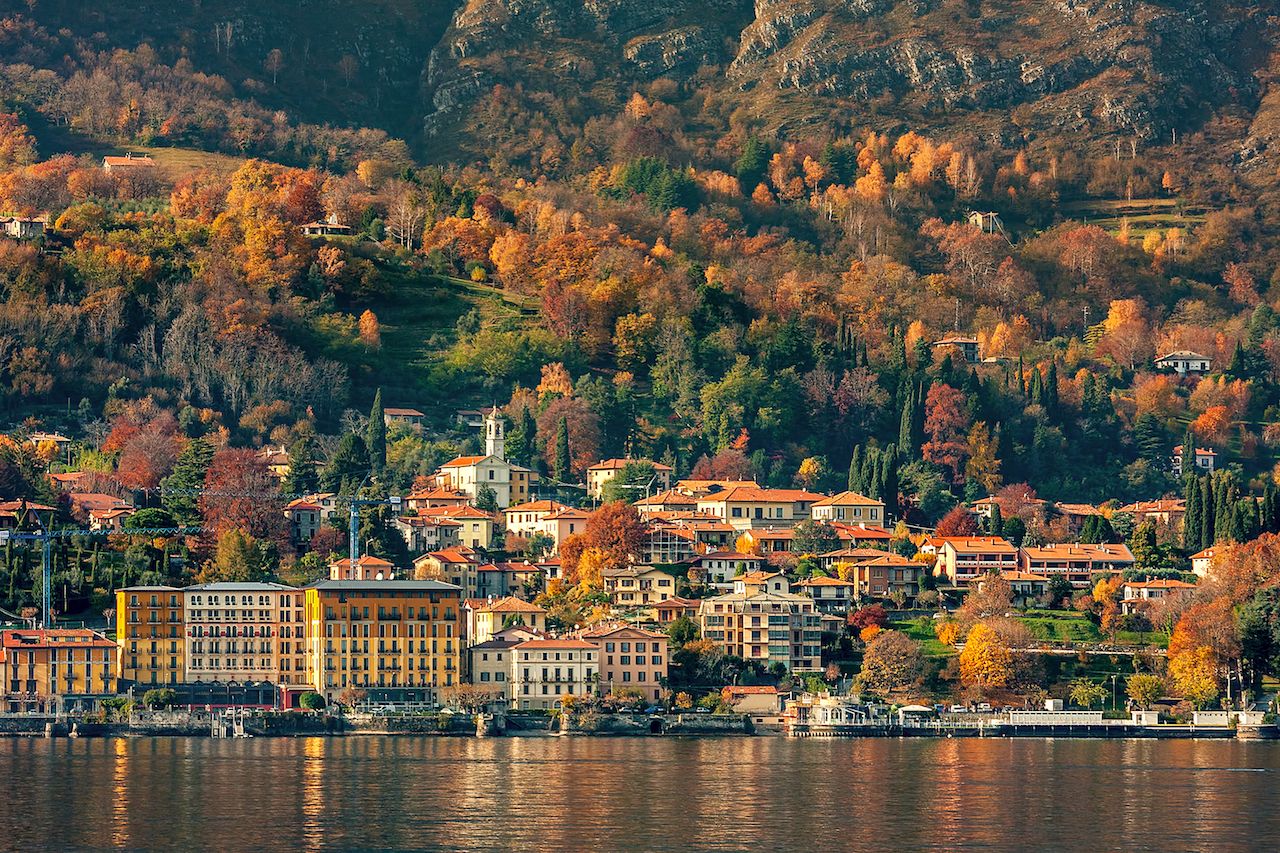 Most people think of Lake Como as a summer destination, best for swimming, renting boats, and eating gelato. But it’s worth delaying your Italian holiday until the fall, which transforms the lakeside landscape into a stunning array of red and golden colors, sublimely reflected in the water. The best way to see it is by driving Lake Como’s ancient Roman Via Regina, which hugs the west coastline and passes elegant villas encroached by orange foliage.

About halfway down the west coast you can stop at the picturesque lakeside town of Menaggio — which is less touristy than the more famous Bellagio — for a walk along the lake’s edge in the still-hot autumn sunshine. This being Italy, you naturally have to stop for a typical simple trattoria lunch, such as at Trattoria la Vecchia Magnolia, or an ice cream at Gelateria Edo. 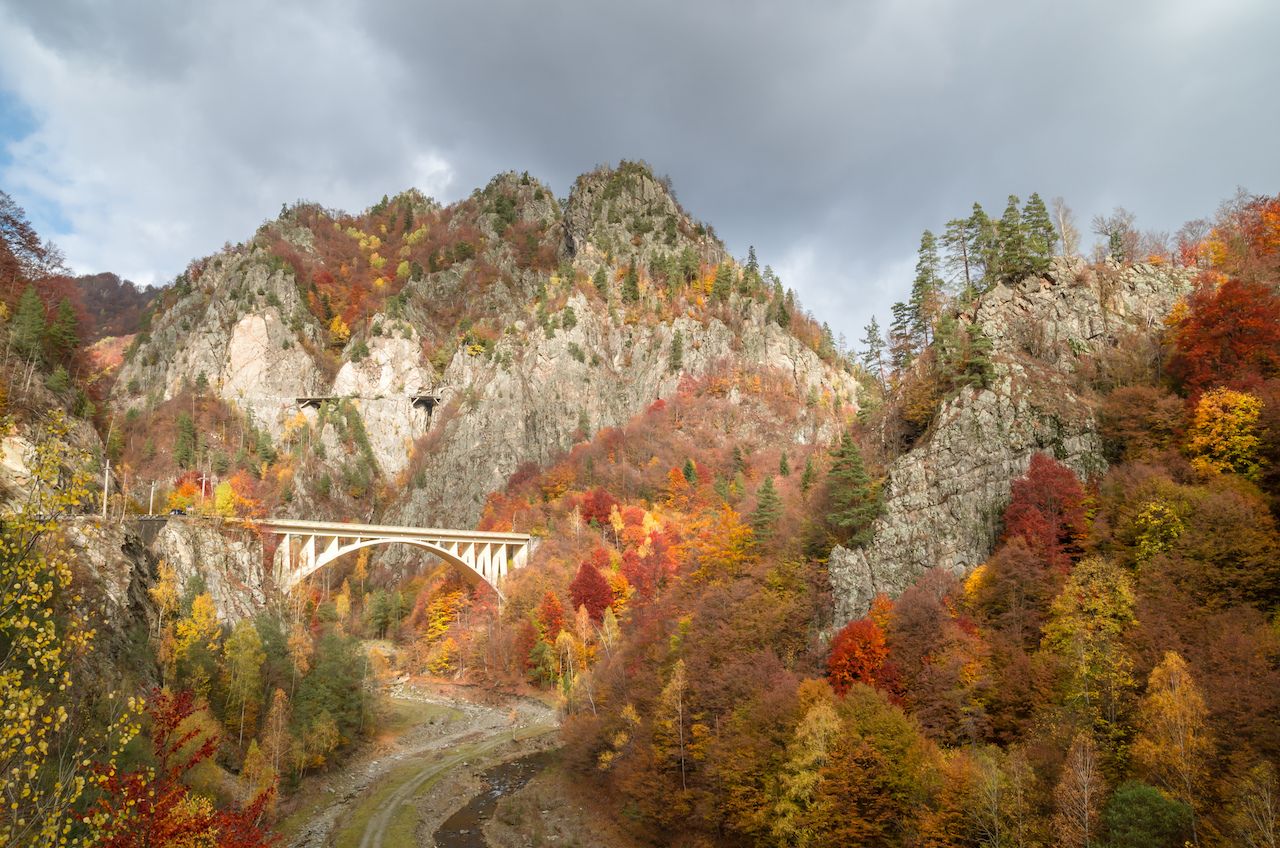 The 56-mile Transfagarasan road in Transylvania was named the best road in the world by Top Gear presenter Jeremy Clarkson for its serpentine bends and steep descents. As a bonus for fall lovers, the valley becomes a golden paradise come September. The mountain route crosses the Fagaras Mountains in Romania, joining the village of Bascov with Cartisoara. With one section reaching over 7,000 feet, it’s a route to be done in early fall, before snowfall closes it.

After passing the village of Capataneni, look up to see Poenari Castle sitting dramatically on a desolate cliff top. This was once the property of Vlad the Impaler, who became Bram Stoker’s inspiration for Count Dracula. The fortress-like castle is likely to send a shiver down your spine as you pass. To the north, after driving through the tunnel running under Paltinu Ridge, you reach the highest point of the Transfagarasan. Here, you can stop off at glacial Balea Lake and enjoy the scenery. This is also the location of Romania’s Hotel of Ice, which gets rebuilt every year using ice from the lake, but you’d need to visit between December and April to see it — too late for the autumn colors. 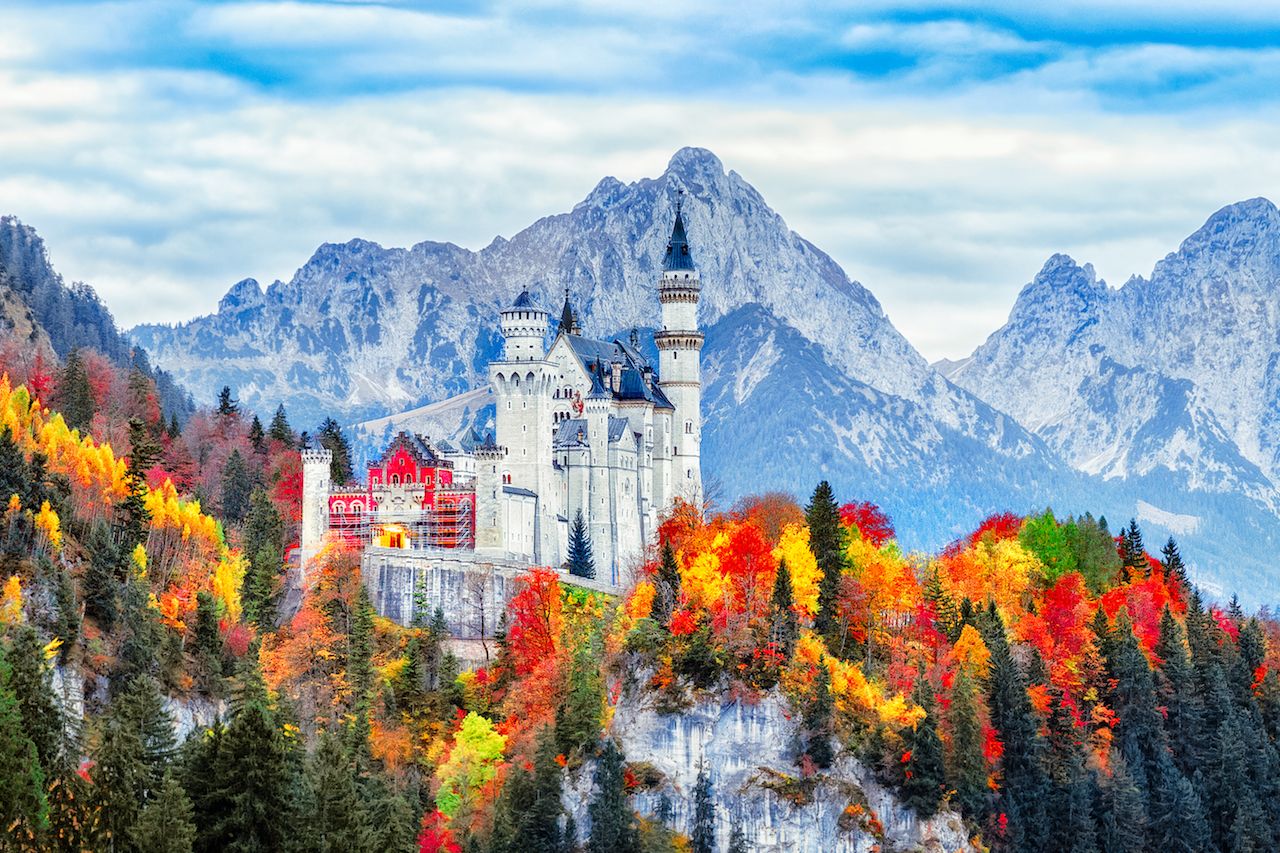 It’s hard to pick a better time than fall to visit the famous Neuschwanstein Castle in Bavaria. The white fairytale castle rising up out of a forest of red, orange, and yellow trees is magnificent. It’s one of the highlights of the aptly named Romantic Road, a route established in postwar times in a bid by Germany to foster tourism. As it turns out, that road was an excellent idea.

The route begins in the historic city of Wurzburg where you can stop at the lavish Baroque Wurzburg Residence. Early September also sees the city come alive for a festival of street music. The route continues through several historic towns, such as spa center Bad Mergentheim; Landsberg am Lech, whose walls date to the 15th century; and Wies, where you can visit the UNESCO-designated Wieskirche. All the way along you have panoramic views of fall-hued forests and the snowy Alps, and right towards the end, you reach the magical Neuschwanstein Castle. 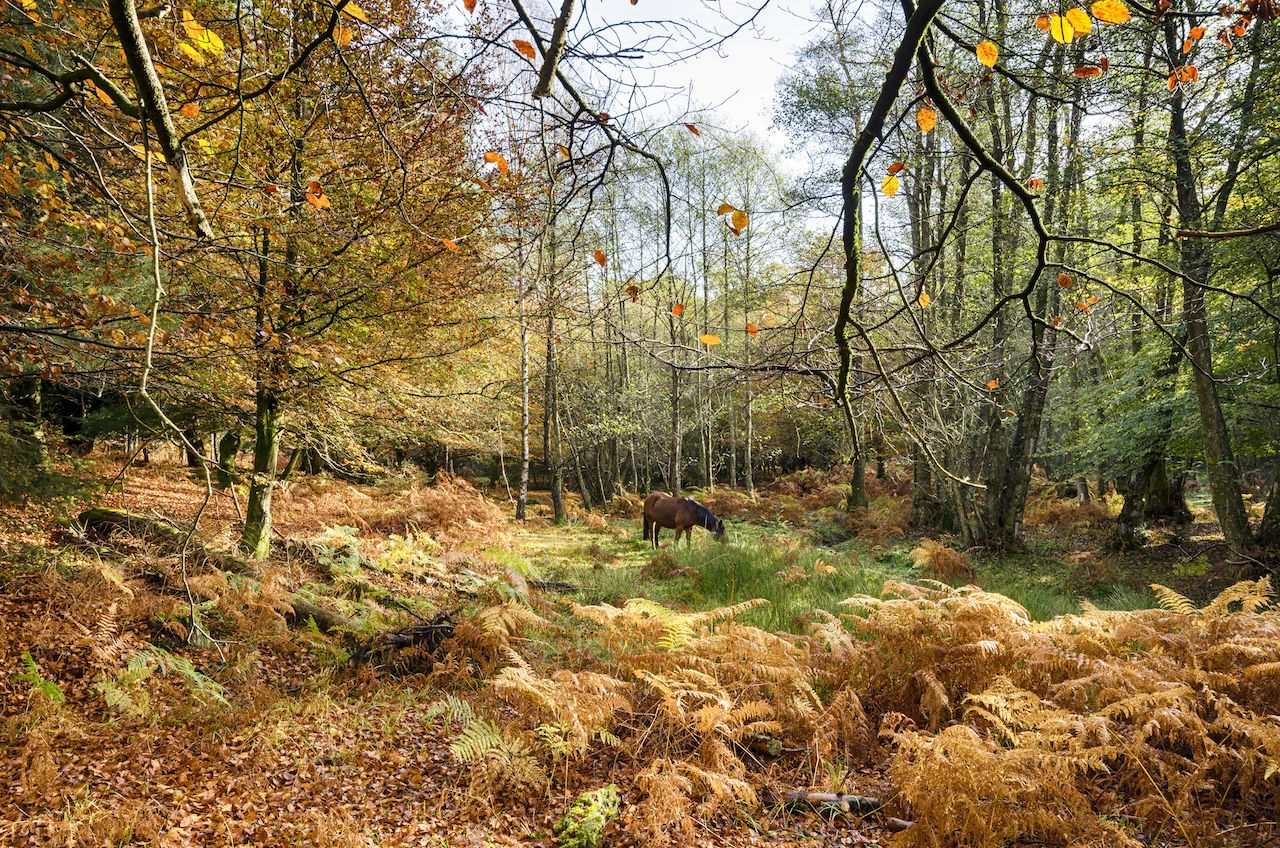 Fall in New Forest in the south of England means wild ponies grazing in glades of golden bracken with stately oaks and redwoods in various hues of red and orange lining long drives. There’s no real designated route here, so you could just meander at random down country lanes passing thatched cottages and little villages. A rough itinerary could be to start from Lymington and wind around the villages of South Baddesley and East Boldre until you reach the outskirts of Brockenhurst. There, you can take the well-known drives of Rhinewood and Bolderwood Arboretum, where you’ll drive past the tallest trees in New Forest and maybe even spot the oldest oak.

Look out for the beloved free roaming ponies, deer, and pigs snuffling acorns. Finish up your drive with some traditional British pub grub at the Oak Inn near Lyndhurst. If the sun’s out, enjoy a pint in the garden — but, if the weather’s more typical of the fall season, there’s a welcoming open fire inside. 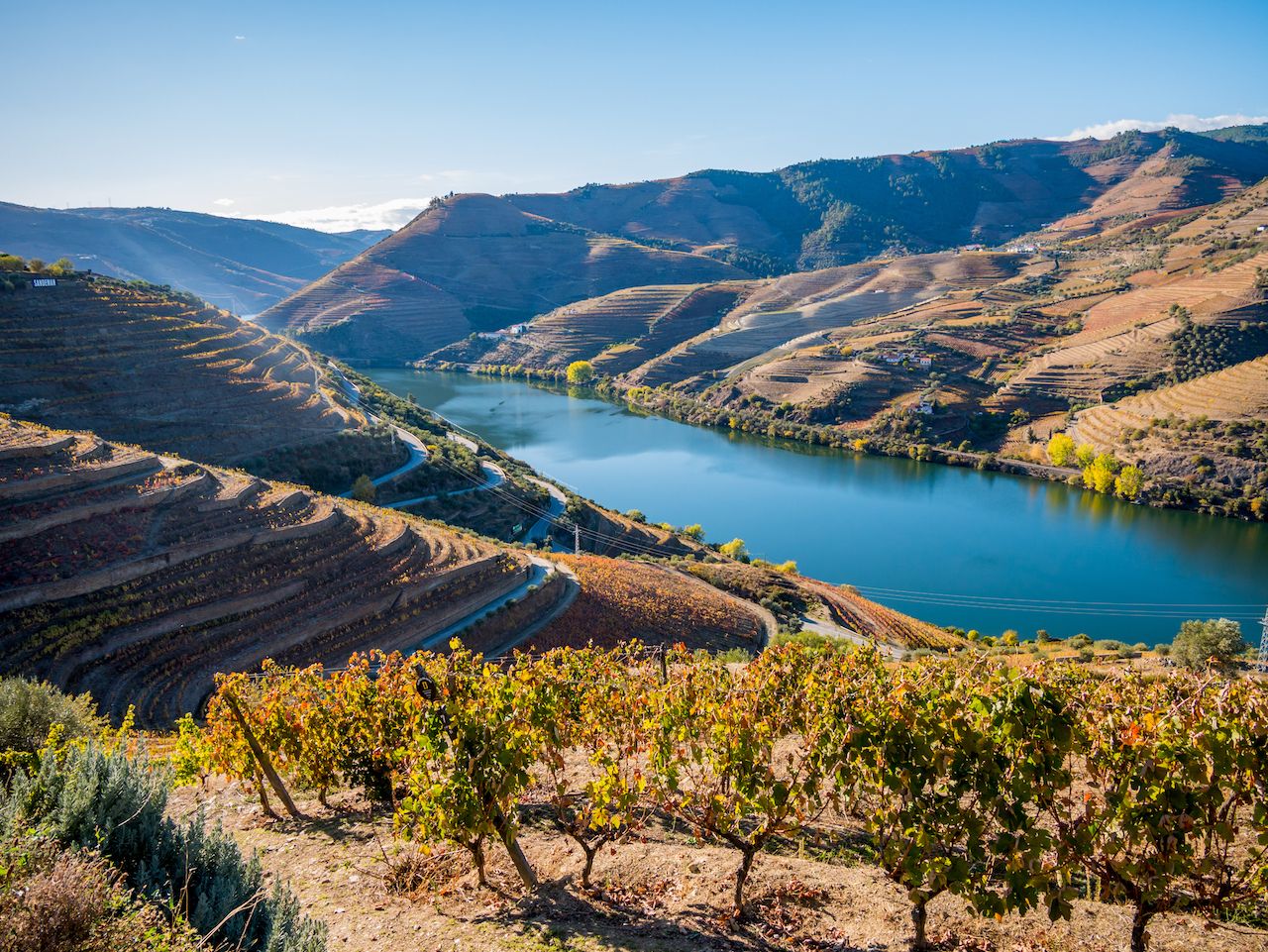 Portugal’s N222 takes visitors through the core of the country’s port-wine-making region in an electrifying series of twisting curves. It begins in Peso de Regua, where you can visit the Douro Museum of port-making, and then snakes along the River Douro, which breathes life into the Douro Valley, to the town of Pinhão.

It’s best to be a passenger on this drive, preferably with a passionate driver who will enjoy the road’s 93 bends while you get distracted by views of terraced vineyards with leaves turning golden. In fact, the area has UNESCO status because of the positive impact the tradition of viticulture has had on the cultural landscape. Stop off for a boat cruise down the river; there are several options, from one-hour trips from Pinhão on a traditional Rabelo boat to full-day tours during which you’ll stop at vineyards complete with port tastings. 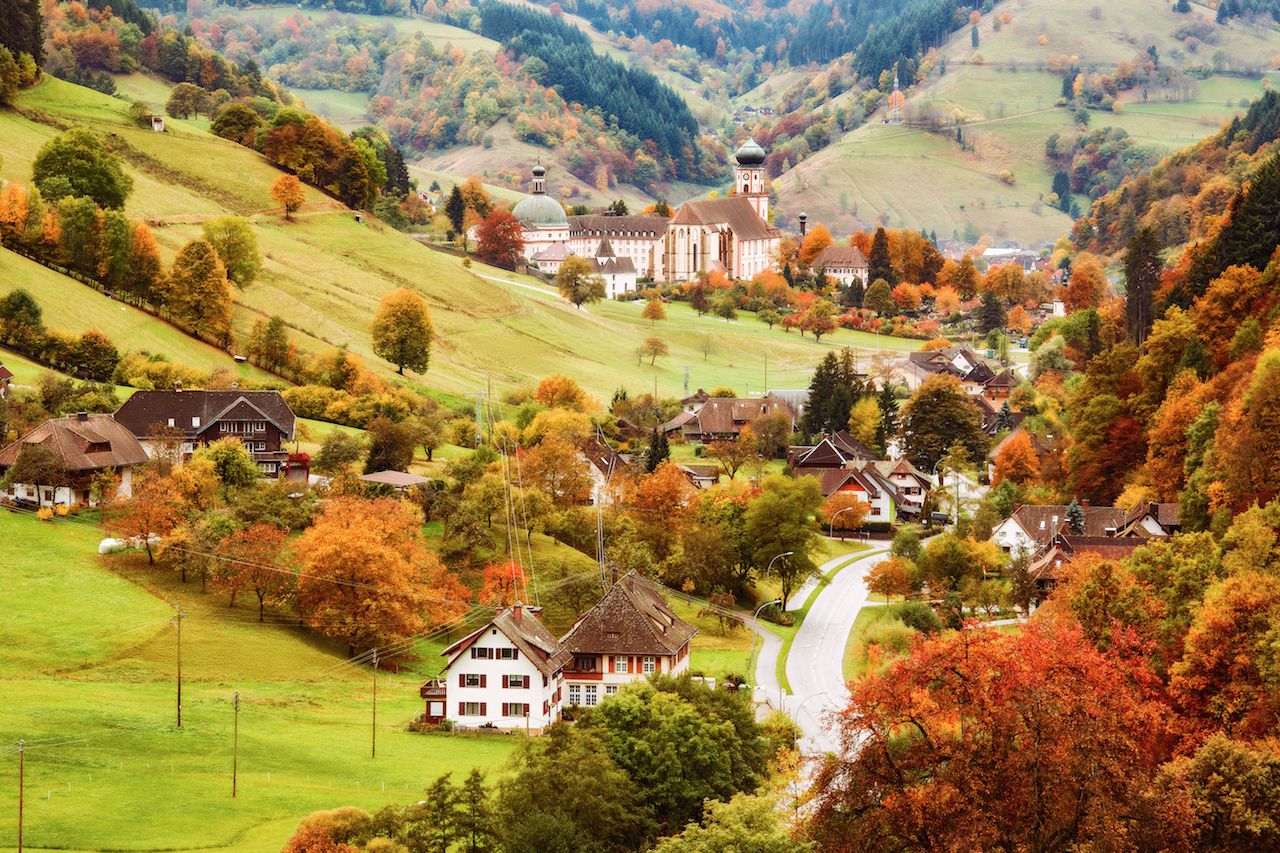 The Schwarzwaldhochstrasse, also known as the B500, takes visitors through the dramatic scenery of the Black Forest. The 40-mile route begins in the town of Baden-Baden, then whisks drivers up to altitudes over 3,000 feet. You’re treated to panoramic views, such as from the peak of Bühlerhöhe, before finishing in the town of Freudenstadt. In autumn, the characteristic black firs explode with fiery foliage, transforming the dark, shrouded roads through the forest.

Spend a little time in Baden-Baden, an elegant spa town of pastel-colored and half-timbered houses, and fill up before venturing into the forest at Schneider’s Weinstube & Vinothek, which offers beer and typical meats in rich sauces. 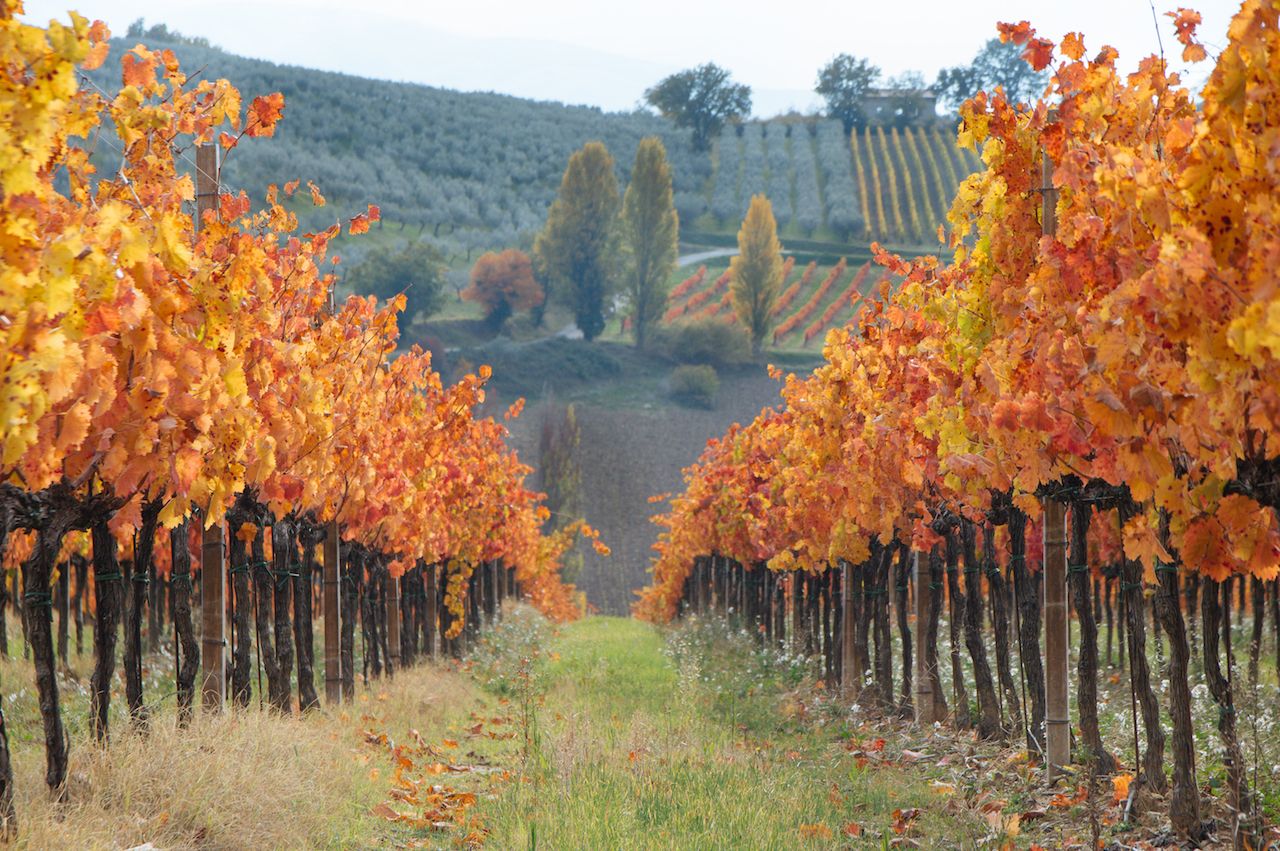 This region of Italy combines art cities, medieval walled hilltop towns, excellent food and wine, and superlative scenery. In fall, the neat rows of vineyards trailing down hillsides become a spectacular array of vibrant reds and yellows, creating a patchwork landscape when viewed from a distance. Try driving a scenic route beginning in Spoleto, where you can already get distracted by a fresco cycle of Filippo Lippi in the 12th-century cathedral. Continuing through the Monti Martani, you can then stop in Bevagna to see its Romanesque churches and eat at acclaimed restaurant Redibis.

You can finally meander slowly towards Assisi where you can join pilgrims heading to the Basilica of San Francesco with a fresco cycle by Giotto. With cultural appetites satisfied, treat your taste buds to a cheese and meat platter and excellent wine at Bibenda. 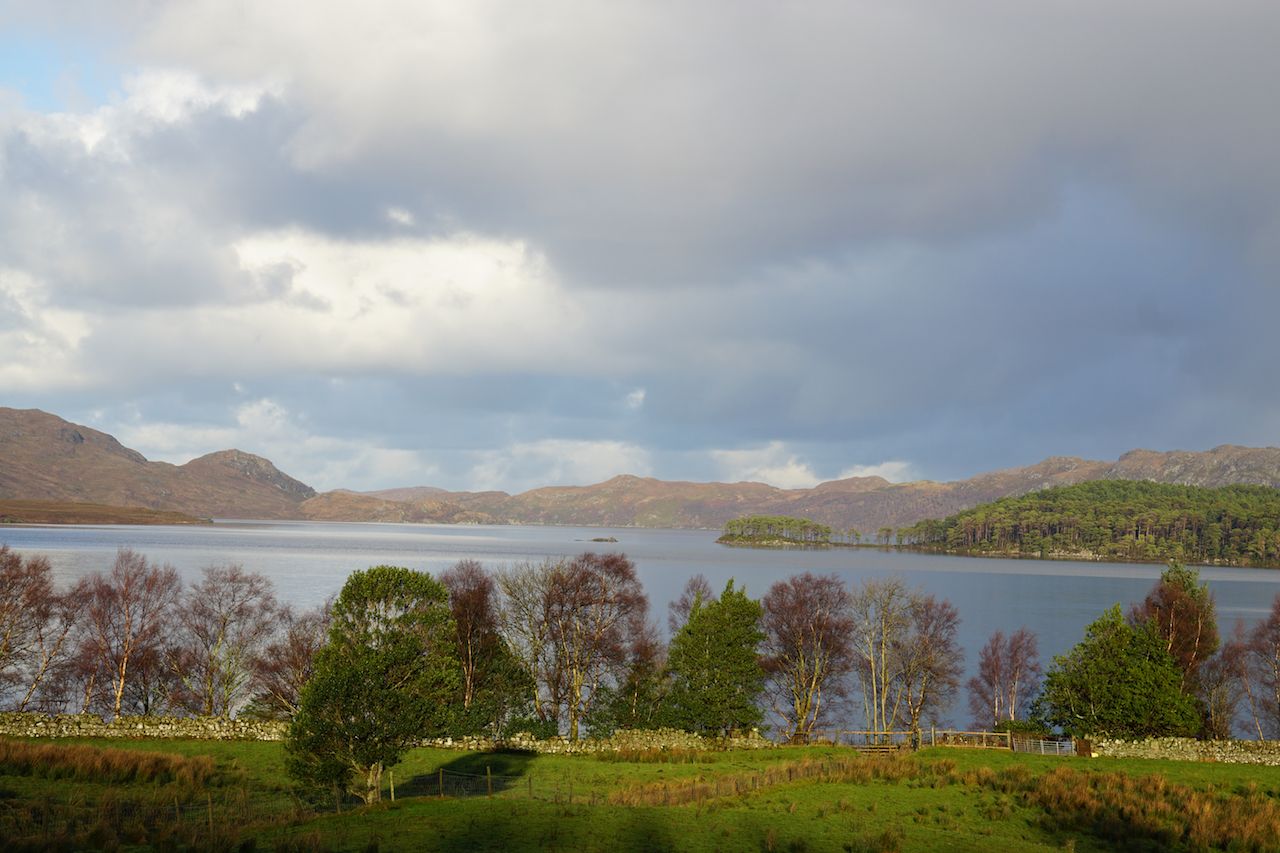 Called “Scotland’s Route 66” by Visit Scotland, the North Coast 500 takes drivers along country roads that meander around the west, north, and east coasts of Scotland. It passes dramatic ruined castles, such as Ardvreck Castle, and desolate beaches of clean white sand like at Durness on the north coast. The route can be done as a circle, beginning and ending in the city of Inverness. Starting from there, it heads west to Applecross on the coast, where you can stop at the nearby Applecross Smokehouse for artisan-made smoked salmon, patés, and sea trout. The road then follows the west coast northwards to Durness, one of the most northwesterly points in Scotland. It then runs along the north coast to John o’Groats, the most northerly point in Scotland, before returning to Inverness.

In September, the glens are washed with a golden sun when it’s not raining, and the many lochs reflect the burnt amber bracken and ochre moors. Scotland also has another special autumn hue: the dusty purple of heather, which lasts into October. On your way, you might want to stop at one of the oldest distilleries in Scotland, Glen Ord Distillery.