Ferries are often means for getting from point A to point B, added to your travel itinerary out of necessity, not enthusiasm. If you plan ahead, however, a ferry crossing can be one of the most memorable parts of your vacation and much more than a way of getting to your destination. Whether it’s an epic trip through a Norwegian fjord, or an Odyssey-esque voyage through the Greek islands, a ferry ride can be a picturesque and peaceful way to travel. Here are a few of Europe’s most incredibly scenic ferry rides. 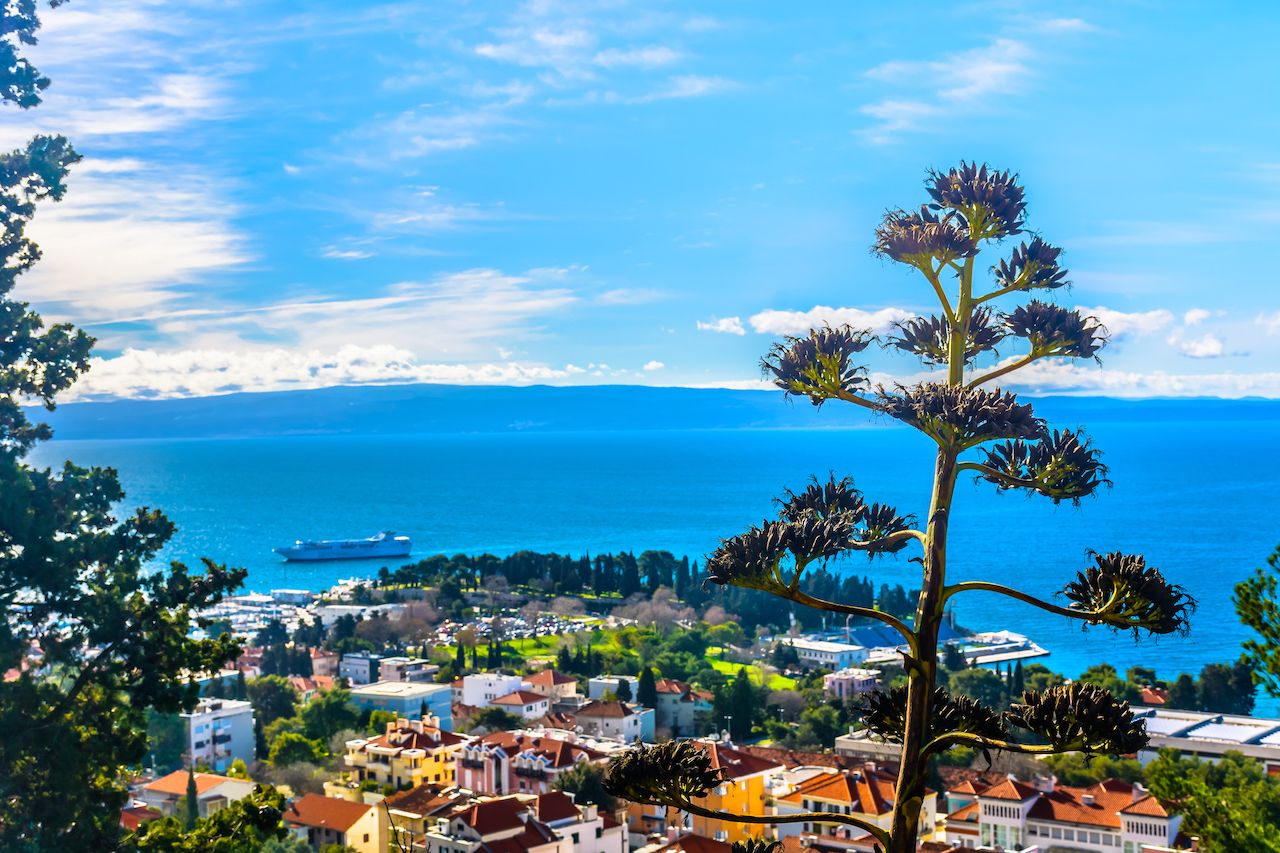 To get from the east coast of Italy to Croatia, you could drive for 10 hours through Slovenia, but you’d miss the unique experience of crossing the Adriatic Sea by ferry. Departing from Ancona all year-round, the Jadrolinija ferry brings passengers (and their vehicles) to the historic Croatian city of Split. Split itself is reason enough to take this trip, with its beautiful beaches, Diocletian’s Palace, and the nearby Krka National Park, but the ferry will also take you along the Croatian coastline. You’ll see secluded beaches and little villages like Stari Grad, on the island of Hvar, where the ferry stops. From Split, you can continue sailing in Croatia on smaller ferries that go south to Dubrovnik, north to Zadar, or even to small islands like Krk. The journey between Ancona and Split takes around nine hours, with prices varying by route and whether you’re traveling with a vehicle. 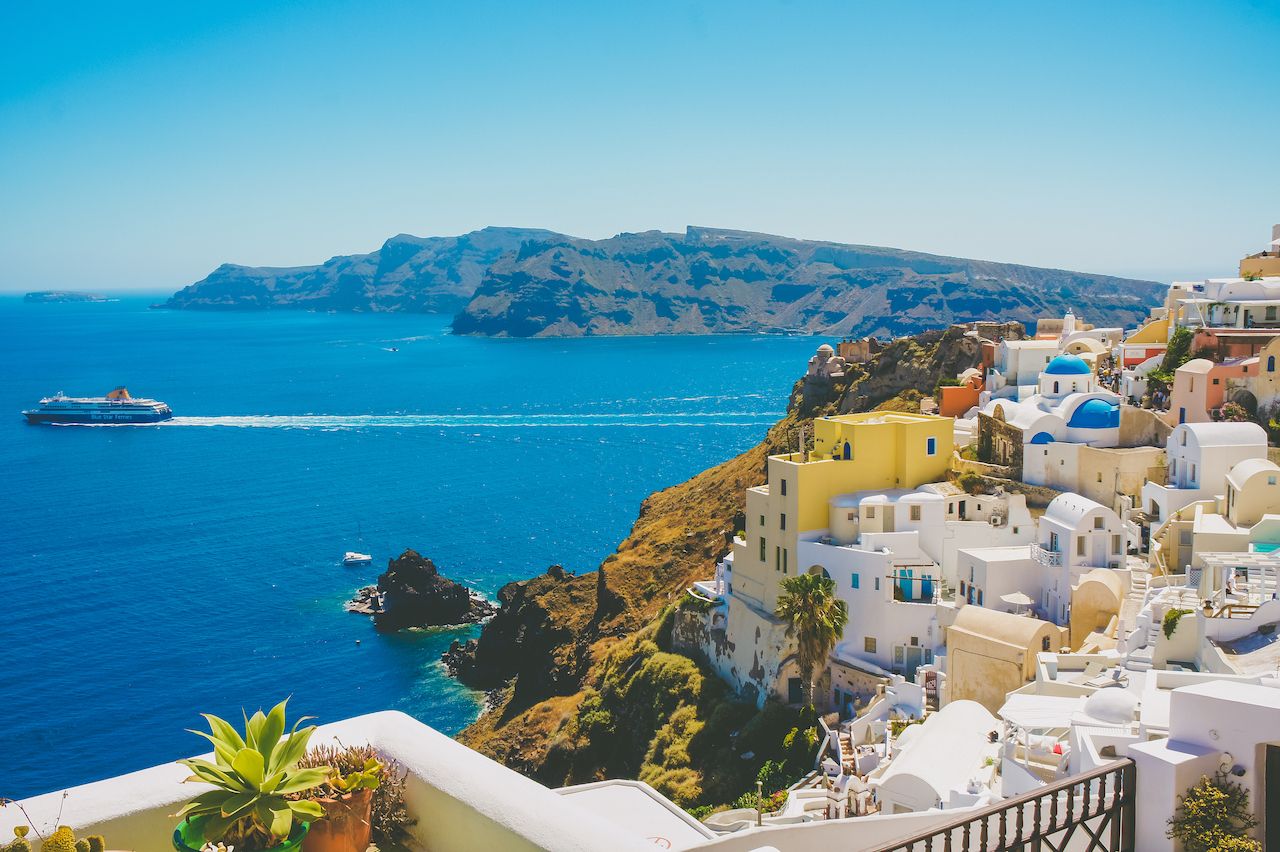 You might get a small taste of island hopping on the Croatian coast, but when it comes to bouncing between sun-drenched Mediterranean islands, there’s nothing like Greece. If you find yourself vacationing either on the Greek mainland or one of its many islands, you don’t have to let the Aegean or Ionian seas limit you. Blue Star Ferries depart from Piraeus on the mainland to over a dozen Greek islands, including Santorini, Mykonos, Syros, Ios, Rhodes, Mytilene, Karpathos, Leros, and more. With around 6,000 Greek islands total and some of the most beautiful waters in the world, you won’t tire of standing on the deck to check out your surroundings. Crossing times can range between 20 minutes and 21 hours based on where you’re traveling, though private cabins are provided for longer journeys, as well as food service (though beware, it’s a bit expensive). Ticket prices vary depending on which island you’re traveling to, your time of travel, and whether you’re bringing a vehicle, but complete ticket information is available on the Blue Star Ferries website. 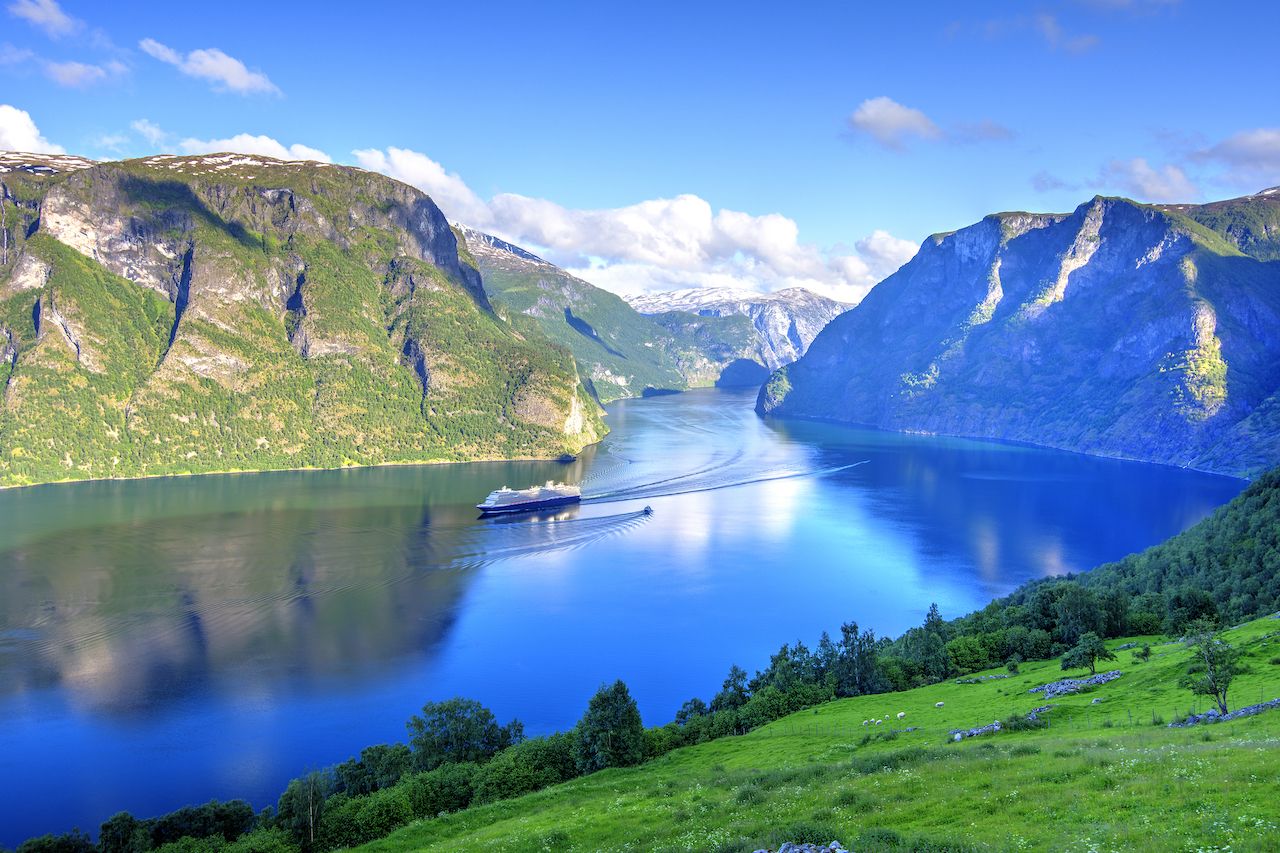 Few journeys in the world are more epic than cruising through a Norwegian fjord, and ferry ride between Gudvangen and Kaupanger might be the most breathtaking of them all. Leave from Gudvangen, an old viking village a five hours’ drive northwest of Oslo, and cruise along the Nærøyfjord, Aurlandsfjord, and Sognefjord. Fjord Norway paints a scenic picture of the trip, describing how passengers will have views of “small homesteads clinging to the sides of the steep mountains that plunge into the fjord. An air of nostalgia permeates this spectacular fjord landscape surrounded by mountains reaching up to 6,000 feet.”

First you will sail through the narrow Nærøyfjord, where up to 25 waterfalls are often visible, before entering Aurlandsfjord and sailing past the small village of Frønningen, which can only be accessed by boat. The ferry runs in spring, summer, and fall; traverses approximately 39 miles; and takes anywhere from two to four hours. Tickets start at $36, but may vary depending on your date of departure and whether you’re taking a vehicle. 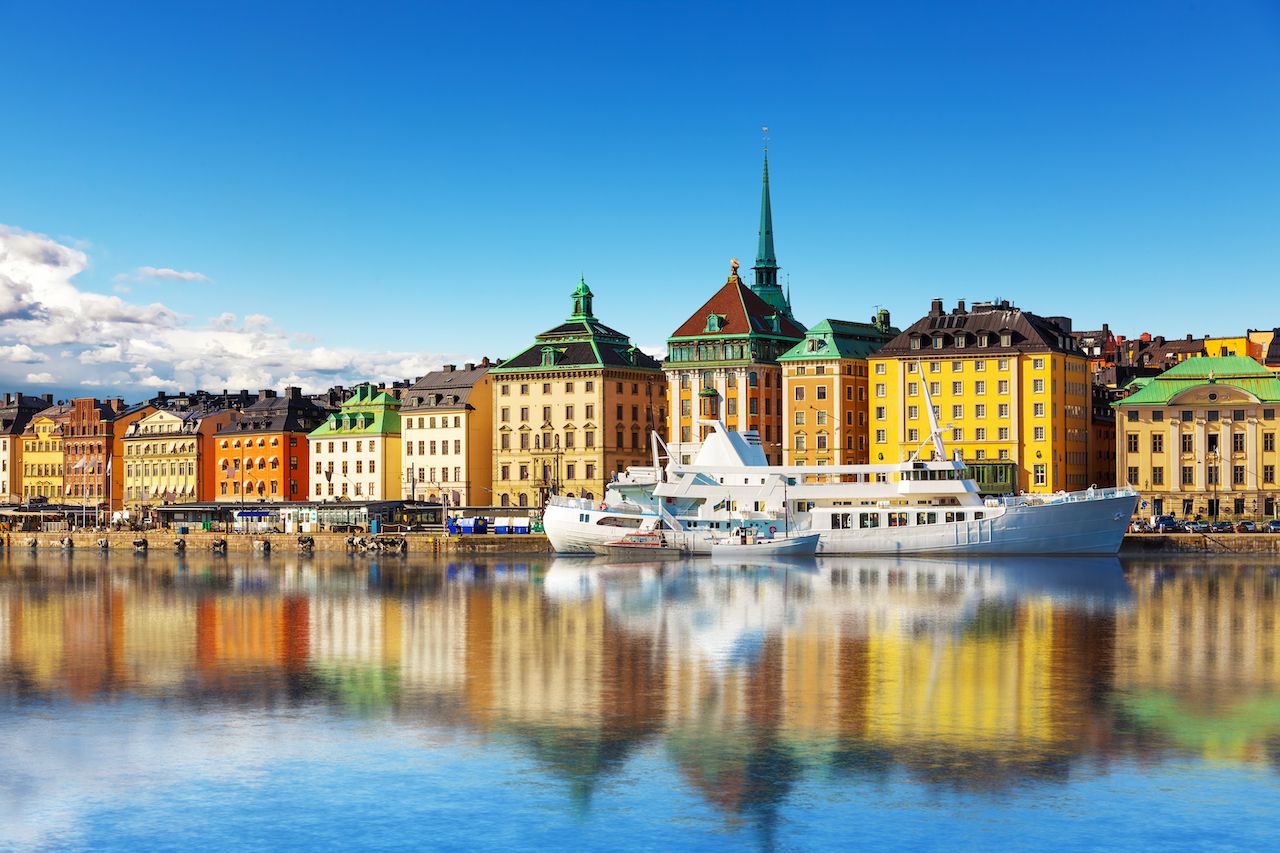 Ferry use in Stockholm is unique. They aren’t only used by tourists for sightseeing, but play an integral role in the lives of the locals. The massive archipelago that borders Stockholm is one of the largest in Europe, with nearly 30,000 small islands, islets, and rocks. These islands often serve as popular day-trip destinations for Swedes, whether for shopping or just a brief nature escape. Many in the capital even own summer homes on these islands, to which they retreat for weeks at a time when the days grow longer. You could easily spend weeks hopping between the diverse islands of Stocholm’s archipelago, without running out of new places to explore.

If you do decide to venture into the archipelago, check out Vaxholm, just an hour ferry from the city center. This little town has restaurants, shops, galleries, cafes, and even beaches, within an incredibly small radius. Also be sure to check out Stora Fjäderholmen, an island rife with hiking trails, both along the seafront and through a forest. It’s also home to several artists’ studios, making it a great place to buy local handcrafted items.

Several ferries depart from Stockholm’s city center throughout the day. Check the timetable for exact times and rates.

5. The islands of western Scotland 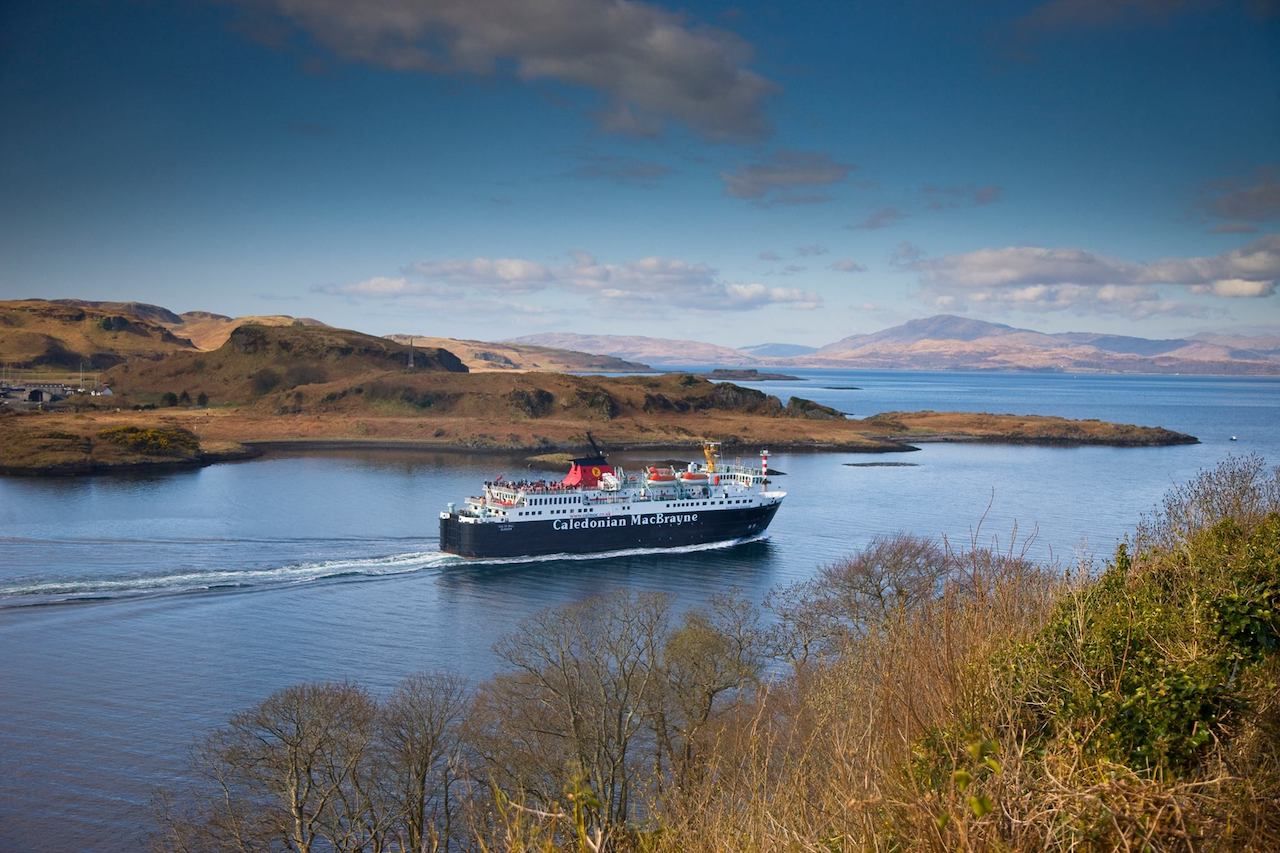 Caledonian MacBrayne operates some of the most epic ferry rides in the British Isles. Serving Scotland’s western islands, including the Inner, Outer, and Southern Hebrides, the Firth of Clyde, and the Isle of Skye, this ferry might be the most picturesque way to experience them. Like the rest of Scotland, these islands are defined by rugged, green scenery, but they are also Scotland’s most remote destinations, filled with ancient castles, ruins, and small fishing villages. Indeed, for many residents of these remote areas, the ferry is their lifeline.

If you’re flexible on time, make sure you check out Kildonan Castle on the Isle of Arran, the fairy pools on the Isle of Skye, and the ancient Gaelic Iona Abbey on the island of Iona. To plan your island-hopping trip through these rugged islands, check out the timetables.

Cruises11 of the Coolest Countries You Can Travel Between by Ferry
Tagged
Cruises Europe
What did you think of this story?
Meh
Good
Awesome