Sonoma County, California, covers more than one million acres and 18 American Viticultural Areas. Though it’s just two hours from San Francisco and three from Sacramento, Sonoma tends to operate much like its own planet. That is, if the rest of the world were decimated by the apocalypse (or by sheer wastefulness), this corner of the universe would live on. It would most likely continue to thrive, actually, as pretty much everything you eat and drink here is grown off of the land within the county. And there’s plenty of wine, of course — around 430 wineries, the vast majority of which are family owned and operated. Sonoma’s grape growing industry is wrapping up a five-year mission, launched in 2014, to become the world’s first 100-percent sustainable wine region.

Visiting Sonoma feels like a time warp into both the past and the future, often simultaneously. It takes you back to bygone eras through both its simplicity and its pristine landscapes. The land is comprised of vineyards stretched across rolling hills, orchards shrouded in valleys of towering trees, and colorful plains dotted with barns and rugged coastline. In its purity, the ambiance also gives one a sense of advanced utopia because the entire operation embodies an approach to living from which the rest of the world could stand to learn.

Flying into Santa Rosa (there are direct flights to and from Denver, Portland, Seattle, Dallas, Minneapolis, Phoenix, Los Angeles, San Francisco, Orange County and, new in September, Las Vegas), you arrive into Sonoma’s largest urban area, which feels far from big city life in the typical sense. With a population of around 175,000, Santa Rosa is home to a handful of chain stores and a pair of shopping malls (one of which was visited by a mountain lion this spring, napping in the shrubbery outside of Macy’s), but the majority of its businesses are, like the rest of Sonoma, mom-and-pop shops and, out of necessity, are hyper-aware sustainable operations. Take Spinster Sisters, for example — a hip cafe in the SOFA district with an inspired selection of local wine and ever-changing breakfast, lunch, and dinner options from asparagus quiche to duck liver mousse, local cod to lamb meatballs. This is the kind of spot that would dominate hipster lore in most cities, but around here it’s just the way things are and always have been. 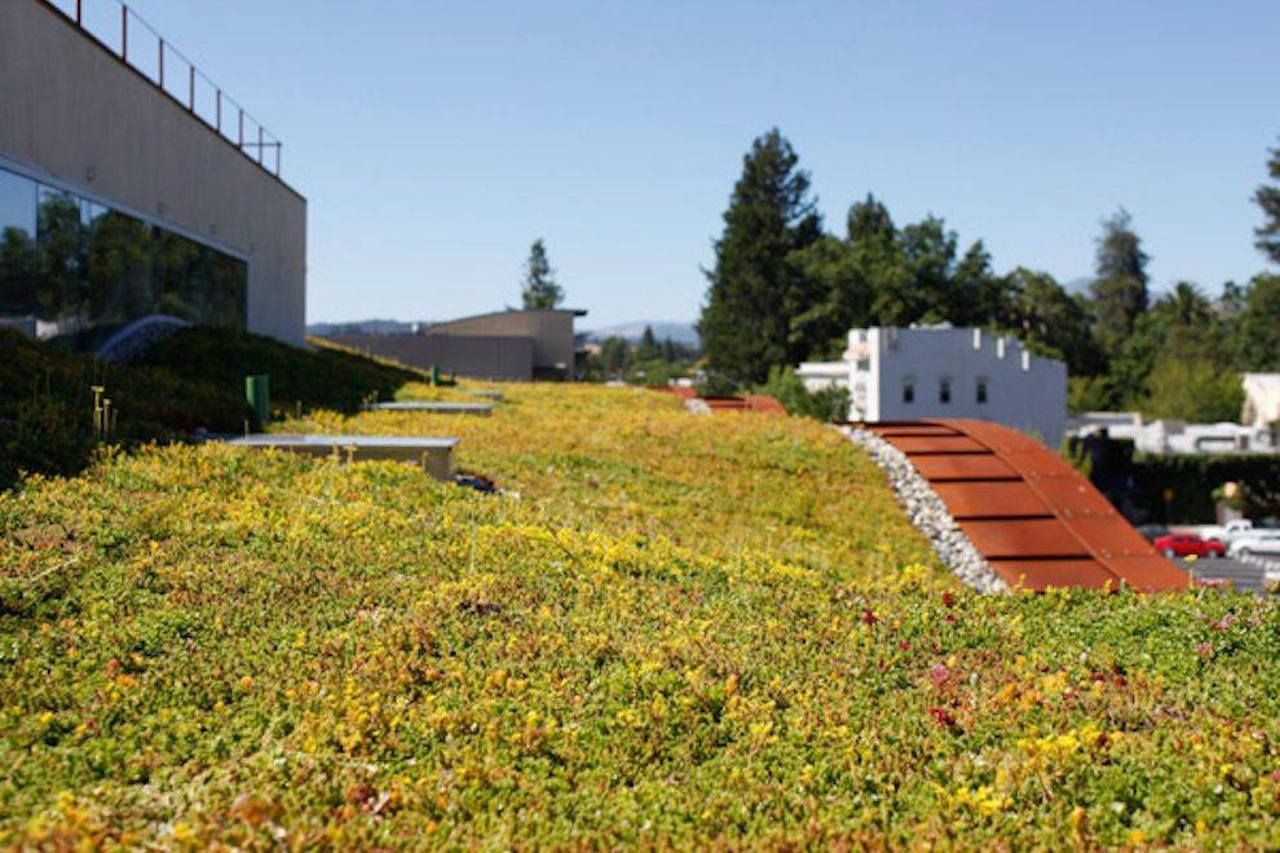 About 15 minutes away along the banks of the Russian River, the small town of Healdsburg is a visitor hub filled with art galleries, restaurants, wine bars, and a few boutique hotels including the new H2, which has sustainability efforts cleverly integrated into just about every aspect. The building is LEED Gold Certified, and once you walk inside there is no plastic to be found. Glasses in the sleek, spacious rooms are cut from wine bottles. Cabinets and counters are rendered from Valchromat (sawdust), a yoga room features a colorful wooden floor procured from a school gymnasium. The first thing you’ll notice, though, is the living roof of greenery and moss, which regulates the building’s temperature. A bioswale was built between the building and the neighboring creek to mitigate water pollution, and guests can help themselves to free water (both still and seltzer) from a fresh tap on each floor.

What it means to be a 100 percent sustainable industry 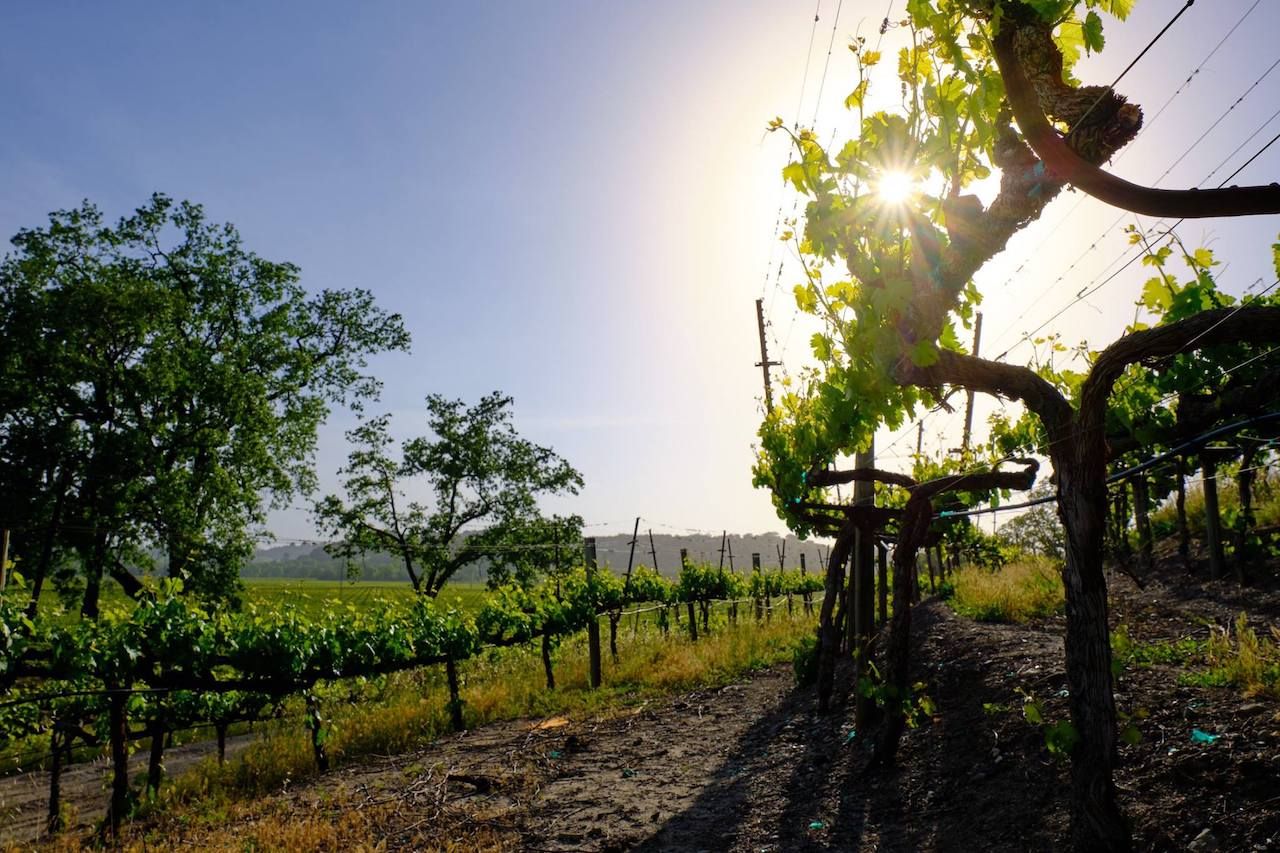 Because no other wine region has achieved 100 percent sustainability, knowing exactly what the end result looks like has been one of the main challenges the county has faced. Sonoma has become America’s most sustainable wine region by inserting the locavore mindset into every operational aspect, from food and drink to architecture and hospitality.

The county has defined its sustainability goal in four parts:

As for the wineries and their green efforts, “There is no one-size-fits-all approach to sustainability,” said Karissa Kruse, president of Sonoma County Winegrowers, which spearheaded the five-year mission toward 100 percent sustainability. “It is about preserving our local ag lands, collaborating and having the resources available not only to survive but to support farming and our broader community in thriving.”

Backed by the support of the winegrowers association, Sonoma’s vineyards are 97 percent of the way toward meeting the sustainability goal. What’s striking is how everyone you come across is enthusiastically onboard, including families like the Duttons, proprietors of Dutton Estate Winery, which sells wine bottles that feature the region’s official sustainability label and farm using drip irrigation. The winery has installed owl boxes for natural pest control — meaning that yes, you might just see an owl here — and recycles all glass and corks, repurposes barrels, and has expanded housing for vineyard crews. 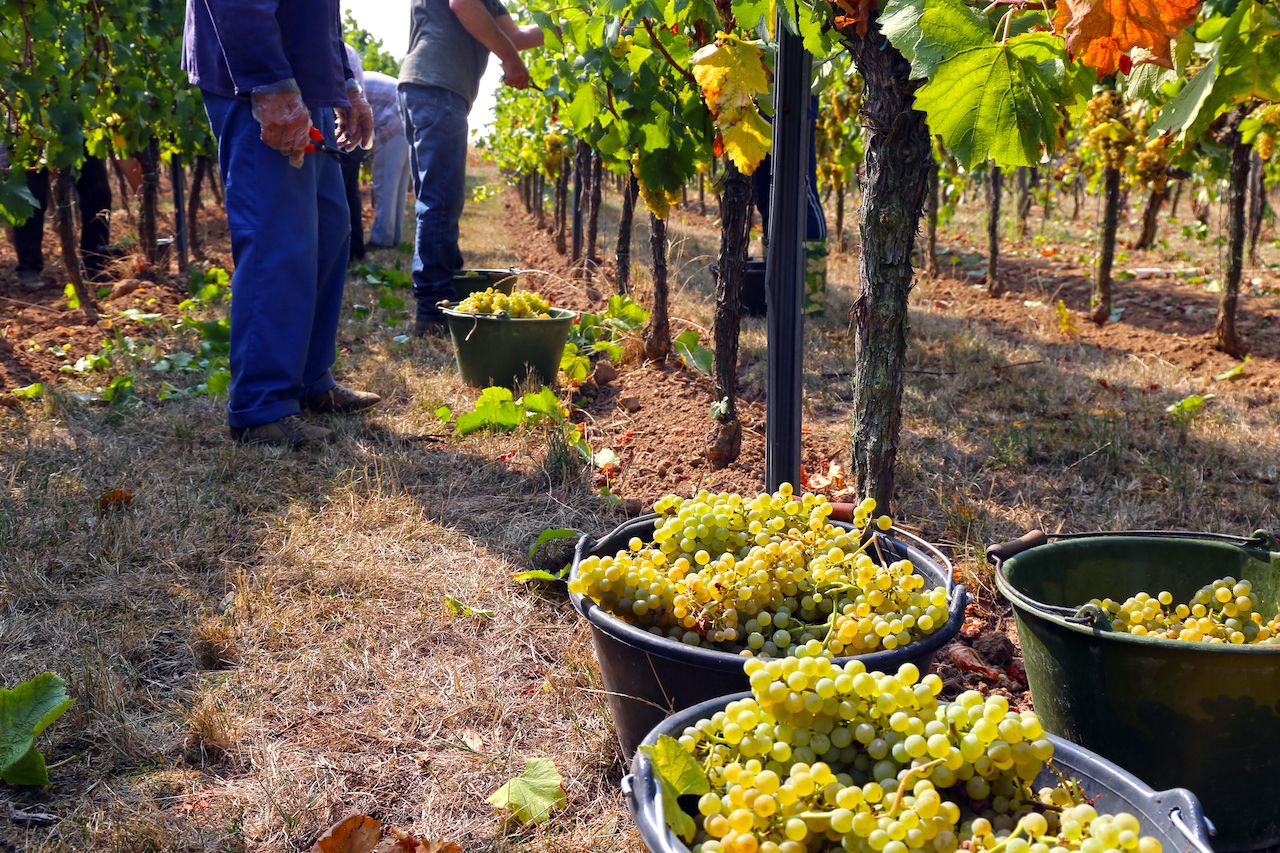 Housing is famously challenging in this region of California, as it is across the state in general, but Sonoma’s community approach has proven beneficial in addressing the problem and developing solutions. The on-site housing at Dutton Estate is a prime example. Another avid proponent of employee lodging is Duff Bevill, known locally as the “Godfather of Sustainability.” Bevill’s vineyard management company works with vineyards across the county to optimize operations for sustainability.

“This effort to become 100 percent certified speaks volumes about our love for the land in Sonoma County, our commitment to environmental stewardship and that we value what is important to our consumers, including being good employers,” Bevill stated on his association profile. In practice, this means bunkhouses for immigrant vineyard employees in the country on H2A Visas (Bevill was required to first offer the jobs to Americans but yielded no interest) and paying $16.34 per hour — more than $4 more than California’s minimum wage.

Wander through the vineyards of Amista, Dry Creek Valley’s only producer of sparkling wine, and arrive at the actual Dry Creek. Amista has resting ponds for spawning salmon along their upstream journeys, and cover crops keep the soil healthy and foster microbial activity. Cover crop implementation is a carbon farming strategy to capture carbon inside plants and soil, improving their health and development while reducing greenhouse gases.

On a knoll overlooking the Russian River Valley, La Crema vineyard, operated by Jackson Family Wines, uses carbon farming. The practice sequesters the carbon produced through daily operation into the soil rather than releasing it into the atmosphere. In addition to the use of cover crops, the property also tills between grape rows to mix organic materials into the soil and control weeds, and produces its own compost.

Over in Alexander Valley, inspired by Sonoma’s sustainability mission, the newly constructed Silver Oak Winery was built to last. “It’s about keeping these sites viable and productive for years to come,” Silver Oak vineyard manager Brad Peterson said about the 113-acre property. Peterson and his team produce 105 percent of their power via solar panels, and feature stylish redwood buildings assembled from recycled material of previous structures. Don’t be surprised if the toilet water is a funky color during your visit — the property collects and recycles all water used at the winery.

Continuing a tradition that began over 100 years ago 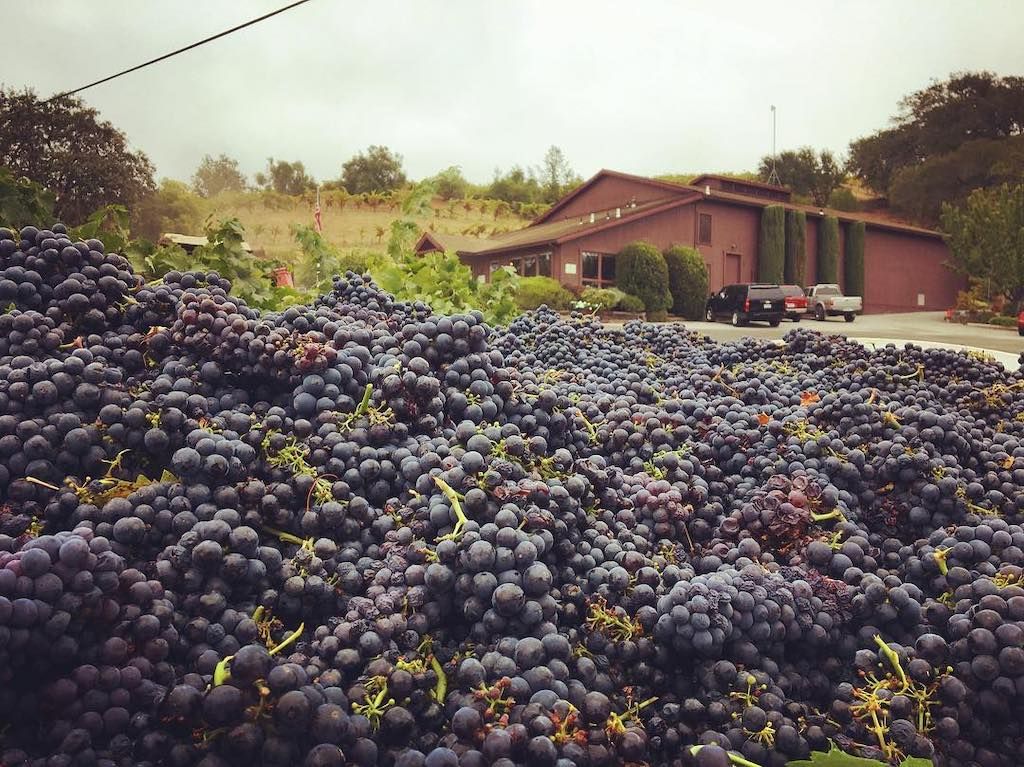 Sonoma’s efforts toward sustainability predate the last five years of this pointed goal. Italian farmers who settled here in the early 1900s created still-thriving farming operations such as Pedroncelli and Sanchietti Farming, and passed eco-preservation practices down through generations.

“Sustainability is a fancy term today, but we’ve always farmed sustainably,” said third-generation farmer Mel Sanchietti. His farm has never used synthetic fertilizer, and long ago mastered the art of cover crops. Sanchietti makes compost out of grape pomace and manure from the resident horses. The farm also uses LED timer lights in its barns and warehouses, and keeps the property’s 1940s-era tractors in working order. Numerous local properties regularly open their crops to Farm to Pantry, a volunteer group that spends its days (52 per year with a team of 100 volunteers) harvesting fruit and vegetables that would otherwise go unused. They are all distributed to local residents in need.

“The way we all survive is through our family farmers,” Kruse said. “Everything you taste in a glass starts with someone who can’t imagine doing anything else.”

Trip PlanningThis Underrated Canadian Wine Region Is the Next Napa Valley
Tagged
Sustainability Wine
What did you think of this story?
Meh
Good
Awesome

9 of the Most Stylish Boutique Hotels in Sonoma County

What It's Like To Go Forest Bathing in Sonoma County, California

Get Paid $10,000 a Month To Work in Sonoma and Become a Wine Expert

3 Travel Itineraries That Take in the Best of Sonoma County

Sonoma Jazz + Is Down Home Fun