The undisputed social media star of 2018’s holiday season was a twerking Santa.

It wasn’t an old man in a viral video or some animated version of North Pole pole dancing, either. It was a kitschy robot in a Christmas-themed bar. Or, more accurately, about 100 Christmas-themed bars around America. The Santa — and the Miracle bar pop-ups he came from — became an Instagram sensation, with everyone from Phoenix to Philadelphia posting pictures of previously unused spaces now done up like alcoholic Christmas carnivals.

But why were Americans flocking to these temporary Christmas-themed bars rather than the shopping malls, civic centers, and even corner taverns that have been decking the halls for years? Was it the irresistible lure of Instagram? Nostalgia for childhood? An unending appetite for Mariah Carey Christmas tracks?

The Miracle bars were about more than just Christmas. The string of seasonal bars were about a pop-up craze, where bars, restaurants, and even hotel rooms open for a limited time frame, offering a themed onslaught to the senses that’s tailor-made for social media. Miracle, which started in 2014 in New York City, will repeat its pop-up experience around the US again in 2019. It’ll be far from the last pop-up you’ll see, because the demand for limited-run themes seems to be insatiable.

Nostalgia makes a pop-up the hottest restaurant in LA. 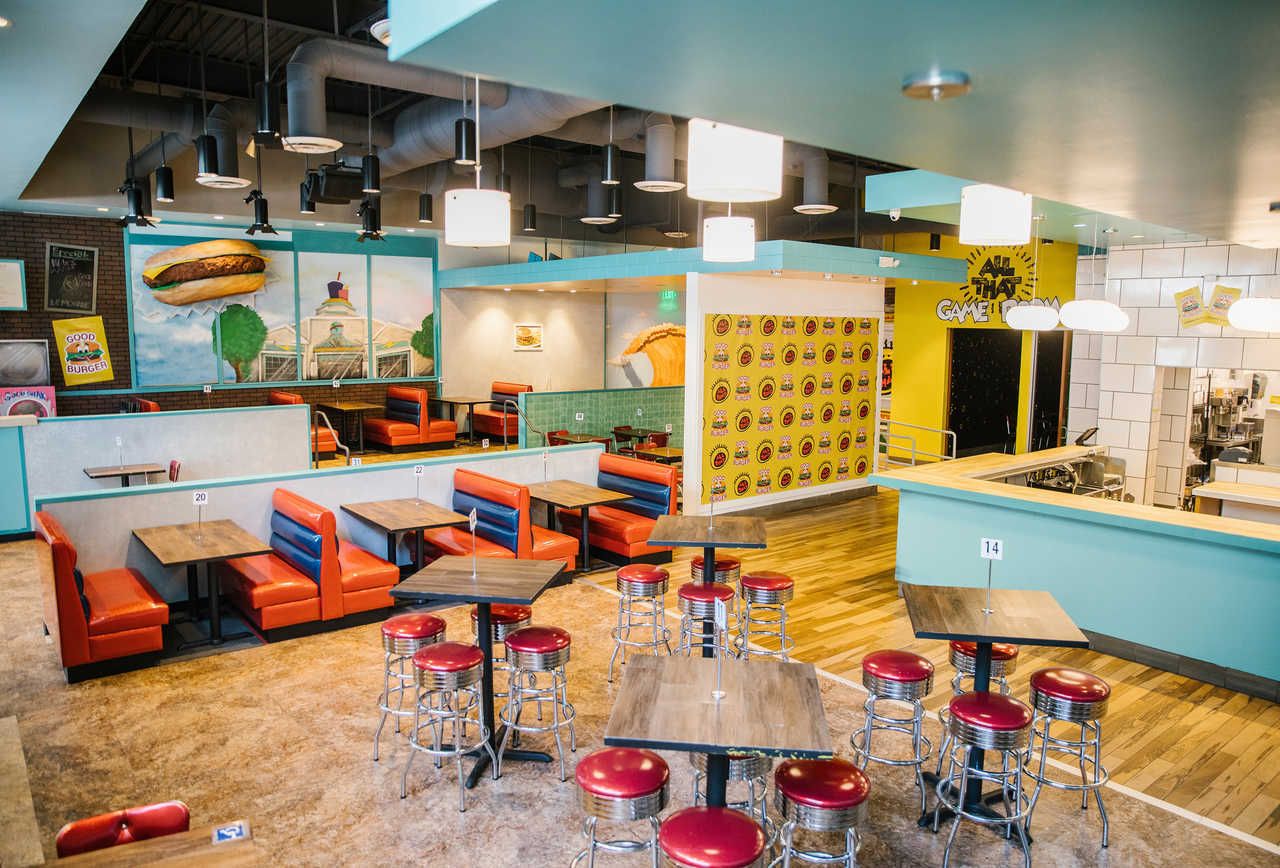 “The idea was to do 300 covers a night, seven days a week, for a month,” says Derek Berry about the first day tickets were offered to Saved by the Max, a pop-up re-creation of The Max diner in Saved by the Bell. “Within 10 minutes we sold out the entire month.”

Saved by the Max extended the timeframe to three months. Within an hour of the tickets going on sale, the place was completely booked.

“That’s when we realized this was a lot bigger than we ever imagined,” Berry says.

Saved by the Max was almost an exact duplicate of the famous diner from the show, with The Max’s same red booths, a row of Bayside High lockers, arcade games, and menu items like the AC Slider and Mac & Screech. The nostalgia-driven Saved by the Max went on for a year, and sold-out in both Chicago and Los Angeles before Barry and his partners closed its doors.

“It was pure nostalgia. (The pop-up) took people back to a finer time,” says Berry. “People come in and say, ‘This show was from a time when I had no problems,’ and they hear 90s music, dress up like the show, quote the show. They come in with their guard down.”

Knowing that escape to childhood can only last so long, Berry and his partners limited the run of Saved by the Max — and their subsequent Beverly Hills 90210 Peach Pit and Good Burger pop-ups — to a year.

“All pop-ups have a shelf life,” he says, perhaps also explaining why Miracle doesn’t offer Christmas in July. “I want to be at The Max when it’s packed, and people are dressed up rather than after people have all been there and it’s half-empty.” 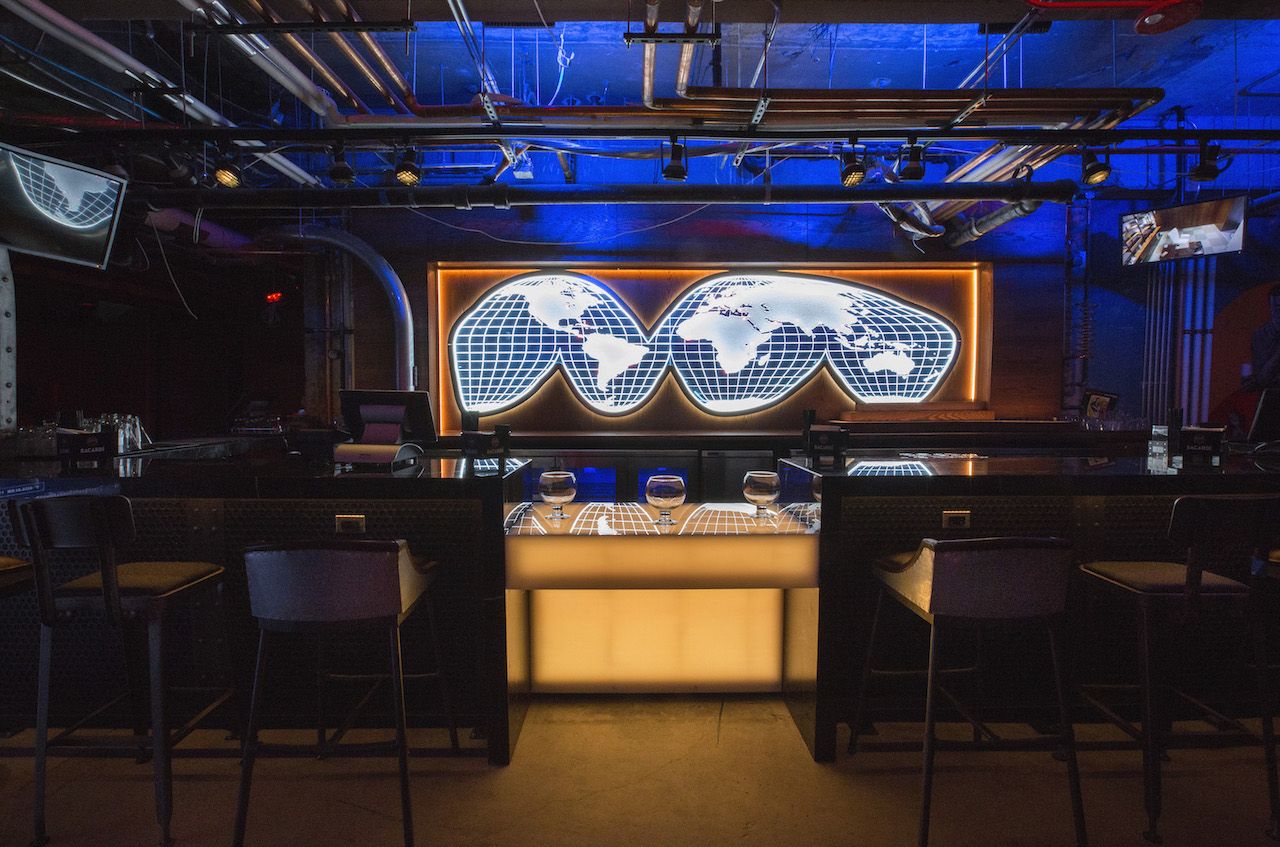 Another reason pop culture pop-ups are so successful is because people want to immerse themselves in a different reality. That can be in the form of a TV show, a holiday, or a world of covert espionage.

That’s part of why SafeHouse — a spy themed bar in Milwaukee and Chicago — has endured since 1966, long past Berry’s suggested one-year shelf life. With its secret location, in-restaurant missions, and memorabilia from movies like James Bond and Austin Powers, its popularity hasn’t diminished.

“People want that two hours of escaping,” says Peggy Williams-Smith, the senior vice president at Marcus Hotels, which runs SafeHouse now. “People just like to feel like part of the spy world for a while.”

The same can be said of escaping onto the set of a favorite TV show.

“We want people to feel like they’re on the show,” Berry says. “We want them to say, ‘I remember this moment from the show, and now I’m living it. Recreating it.’ But I feel like it’s stronger.” He points to a phone at his pop-up that had guests calling 1-800-Crush as a particularly resonating detail.

Of course, to fully immerse oneself in a TV show, living among props from the set is the ultimate experience. Enter the Hamilton Hotel in Washington, DC, which offers a Veep suite furnished with the very couches Julia Louis-Dreyfus sat on as Selina Meyer. And her entire oval office is set up right off the elevator. 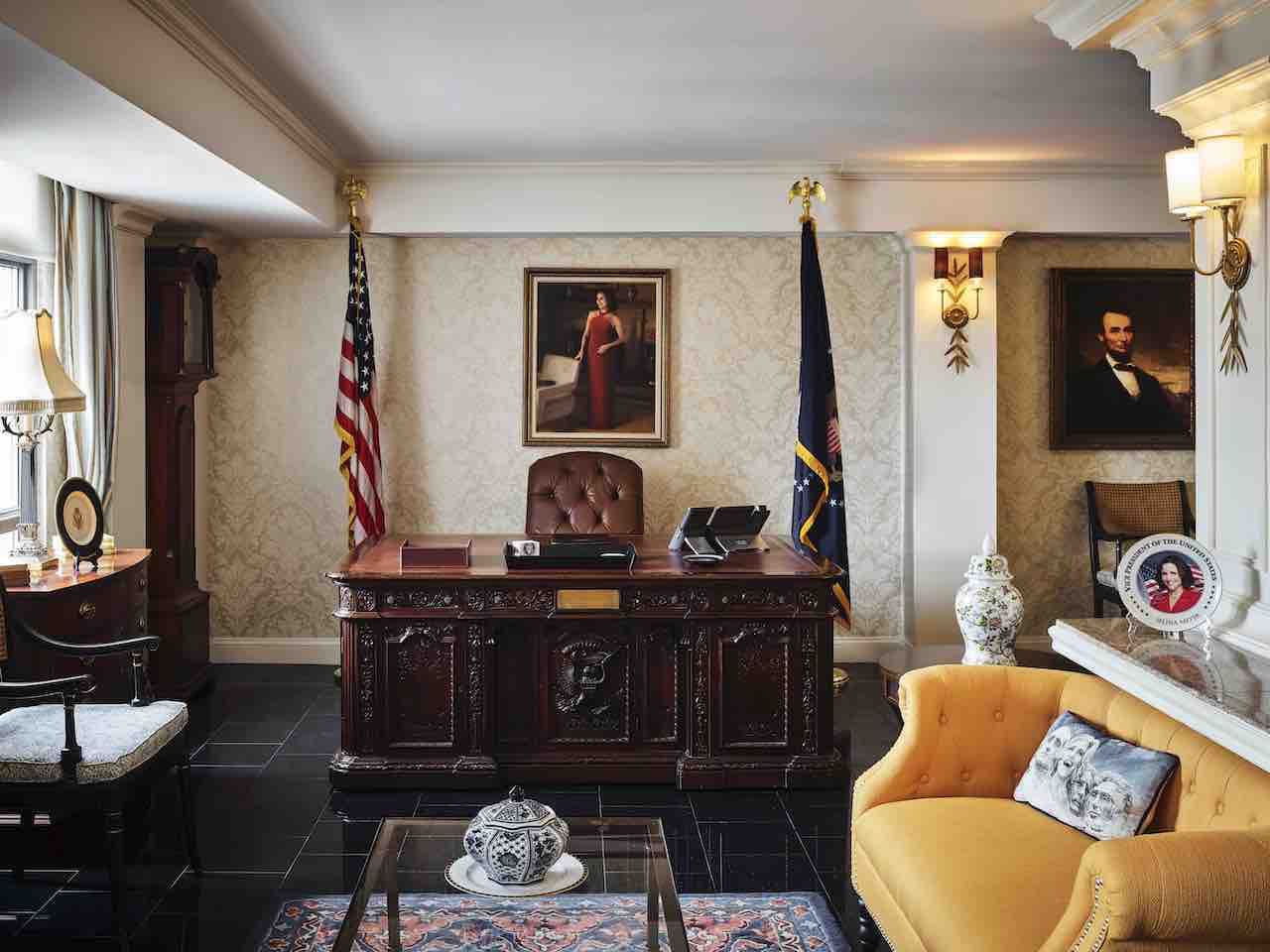 Whereas Saved by the Max worked with NBC for the rights to The Max without acquiring actual set pieces, the Hamilton partnered with HBO on its Veep suite. That allowed it to do things like hang Selina Meyer’s diplomas on the wall and offer a sitting room with furniture from her DC brownstone. It was the first time in HBO’s history it had lent props for the purpose of furnishing another business.

“It’s really committed to being what the exact experience would have been if you’d visited the bedroom in Selina’s suite, or been in her oval office,” says Mark Driscoll, the managing director at Hamilton Hotel. “But it’s still satirical, like Veep was. So it lets people who may not be happy with the current administration be part of the poking fun the show did in its own right.”

Pop-ups are also, of course, about getting the perfect Instagram moment. 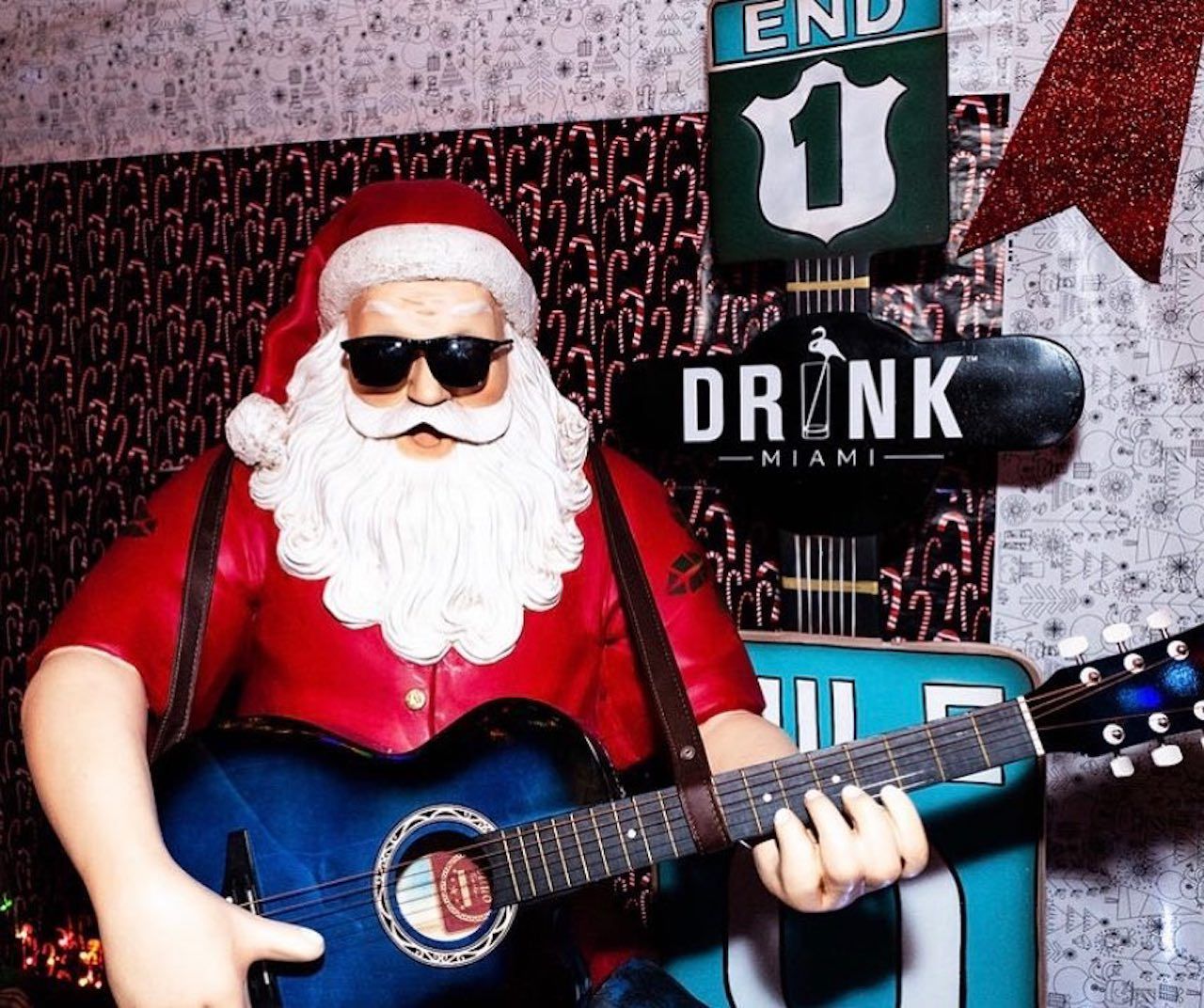 Beyond the nostalgia for yesteryear and novelty of feeling like part of a favorite television show, social media plays a monstrous role in the draw of themed pop-ups. This was obvious to anyone with an Instagram when seeing the Miracle bars in December.

“Ten days in we decided to get a snow machine,” says Amber Love Bond, who was the manager of Miami’s Miracle bar. The machine was set to blow fake snow all over the bar every time the chorus of Mariah Carey’s ‘All I Want for Christmas’ came on. “And after the first couple of nights, people started saying, ‘I know what’s going to happen during the chorus, they do the snow machine!’ They all saw it on Insta, or put it on their Insta, and came in for it. Social media really drives those kinds of activations.”

Social media may also be a big part of why these bars and pop-ups are purposefully ephemeral.

“People want those Instagrammable moments that are only around for a couple months, and they can say they got into,” Berry says. “We took our food and beverage very seriously but still people aren’t coming back more than once or twice. They post it, then their friends wanna go, and they bring their friends, but that’s about it.”

Themed pop-ups get you out of your regular routine, at home or away. 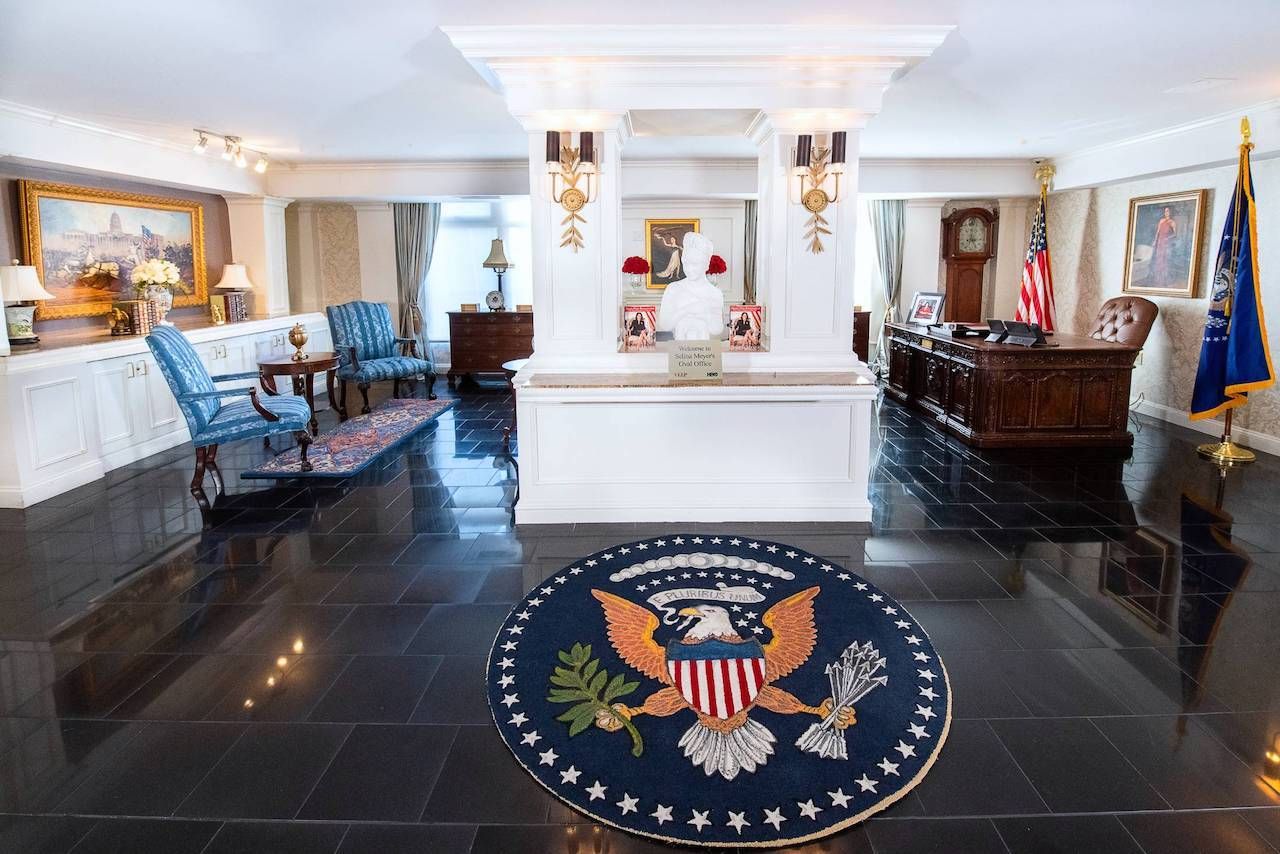 The need for new is also a huge driver to these types of activations. Even in a city like Miami, known for its abundant nightlife, the Miracle bar offered something different for locals.

“It’s the novelty of having something different, special, not the regular rigormorol of your regular weekends,” Bond says of Miracle and other bars like it. “It’s not like going to your local bar that’s all the same all year. And people know it’s not there forever.”

“People want something different. They don’t want cookie cutter, this isn’t just a business traveler trying to get their points,” Driscoll says. “Travelers want something distinctly DC, and this has been very successful in speaking to them in those ways.”

The concept isn’t uniquely American either, as a Barbie suite at the Hilton Cartagena opened in June, following the smashing success of a similar suite in Mexico City. There’s also a Peanuts-themed hotel in Kobe, Japan, and Peanuts Cafe in Tokyo.

So while Christmas bars may not be around all year, we likely haven’t seen the last of them either. Or other themed pop-ups, for that matter. As long as people need a break from their routines and want to escape back into a simpler time, pop-up popularity won’t be waning anytime soon. The only question is who will dethrone the twerking Santa as this 2019’s star of social media.