Miami bars have a specific stereotype: loud, over-priced, and menus limited to basic drinks like vodka sodas and mojitos. Those days are in the past, though. Some of the country’s top bartenders are in Miami now, and they brought high-end spirits, classic cocktails, and respectable drinks along with them. Of course, clubs are still at the forefront for many who visit Miami solely for the party, but there are other options now.

From flashy cocktail bars to dives to breweries to clubs, here’s where to go out in Miami no matter what you’re in the mood for. 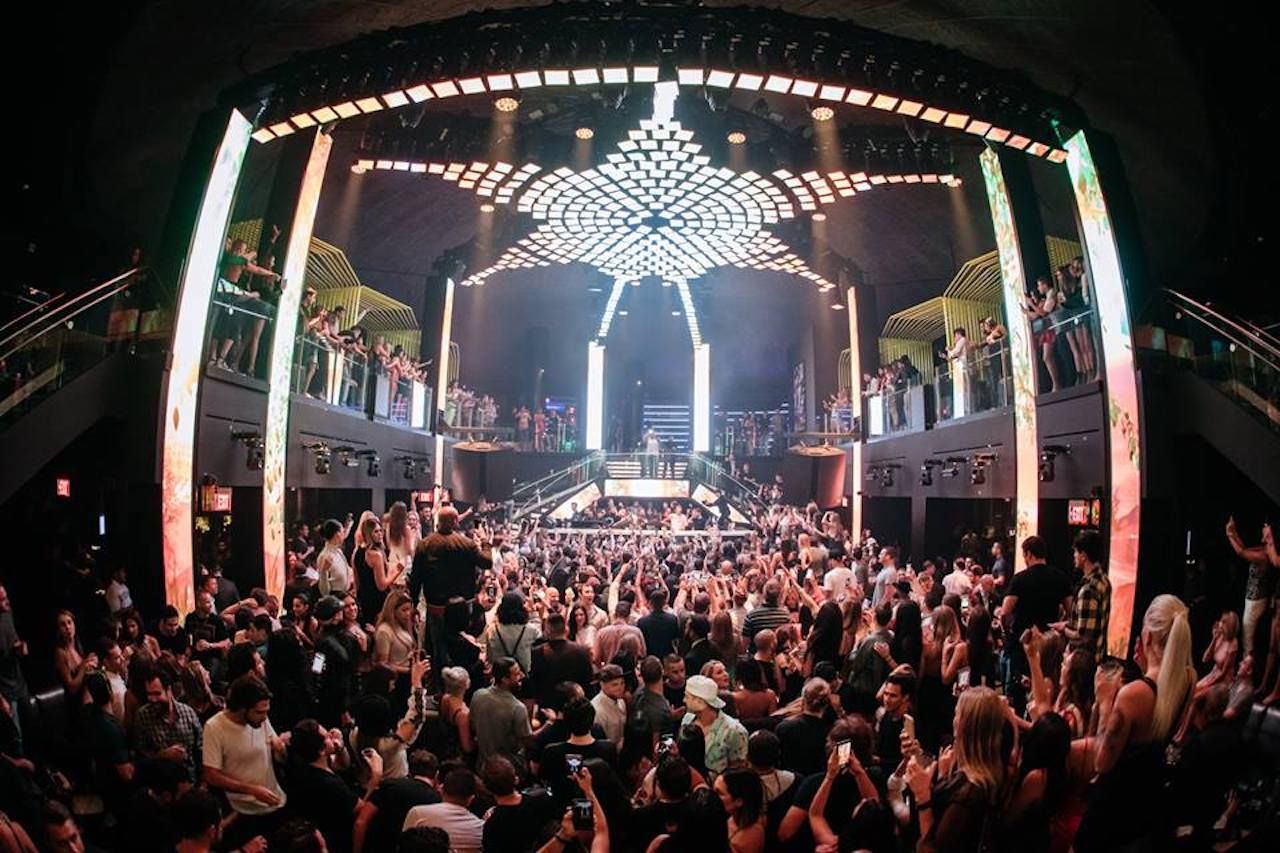 LIV — LIV is the star of Miami Beach nightlife at the moment. It’s a multi-million dollar superclub that attracts the biggest DJs in the world, models, athletes, and pretty much anyone else who wants to be seen in Miami. Which means if you want to go, it’s not gonna be easy. Be prepared for a painfully long line, and if you’re with a group of all guys, don’t expect to get in without dropping more than $1,000 for a table. Groups of all women have a considerably different experience.

Story — Story is Miami Beach’s other high-end mega-club where beautiful people dance until they’re kicked out at 5:00 AM. The lighting and sound here are better than at almost any club in America, and though getting in can be a pain, it’s not as bad as LIV. Still, don’t roll up six dudes deep and expect to walk right in. The 2-1 girl-guy ratio applies here if you don’t buy a table.

Studio 23 — For hip-hop fans, the discussion of Miami clubs begins and ends with Studio 23. Though the club isn’t enormous, you’ll find rappers like Flo-Rida, Migos, and Rick Ross lounging in the booths that line the dance floor. A smattering of athletes, boxers, and other celebrities also make appearances. Studio 23 maintains an upscale clientele by keeping crowds small and plays Latin and Top 40 during the week. 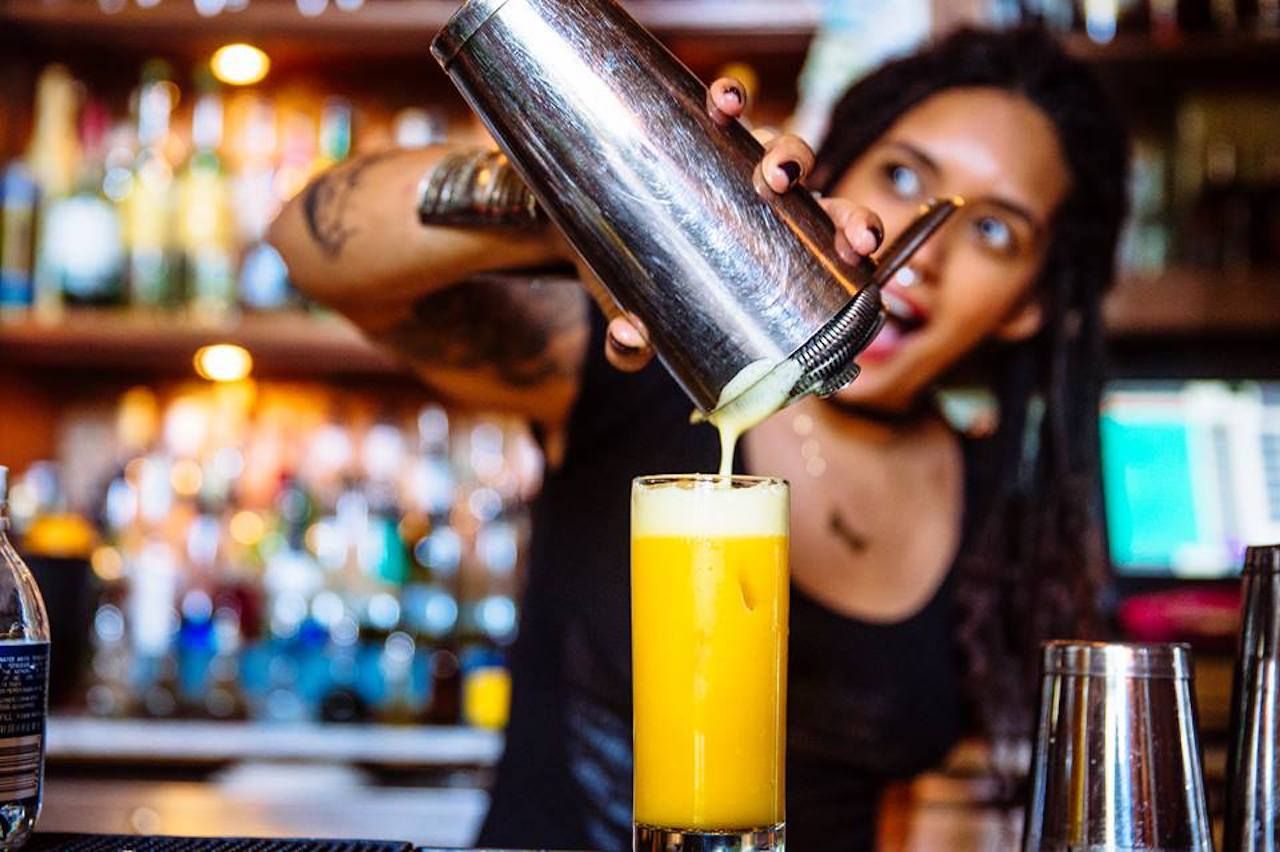 Broken Shaker — Miami is full of places with big reputations and very little follow through, but Broken Shaker is the odd spot that lives up to the hype. This bar in the back of the Freehand Hotel crafts drinks from herbs grown in the on-site garden, and you can drink them by a pool in a shaded tropical courtyard that manages to be pleasant even on humid summer evenings. Plenty of craft cocktail bars have popped up since this place opened in 2011, but nowhere is able to match the atmosphere.

Regent Cocktail Club — The art deco hotels of Miami Beach, with the marble floors and rounded sconces, can make you feel like you’ve been transported back to the 1950s. Nowhere do you feel that transportation more than at the Regent Cocktail Club at the Gale Hotel, where the dark wood bar harkens to an old-school cigar bar. Bartenders in suspenders create different drinks every night, and they can improvise something new if you tell them what you like. It’s not cheap, but it has a feeling of classic, refined elegance that no other bar in Miami can match.

Employees Only — One of New York’s most acclaimed cocktail bars set up shop on Washington Avenue in Miami Beach a few years ago, and some might argue it has the best drink menu in the city. The dark, narrow bar is always filled with a bustling energy, so you might have to wait for your Ready Fire Aim made with Montelobos mezcal, lime juice, honey pineapple syrup, and Hellfire bitters. But the drinks are always worth it. 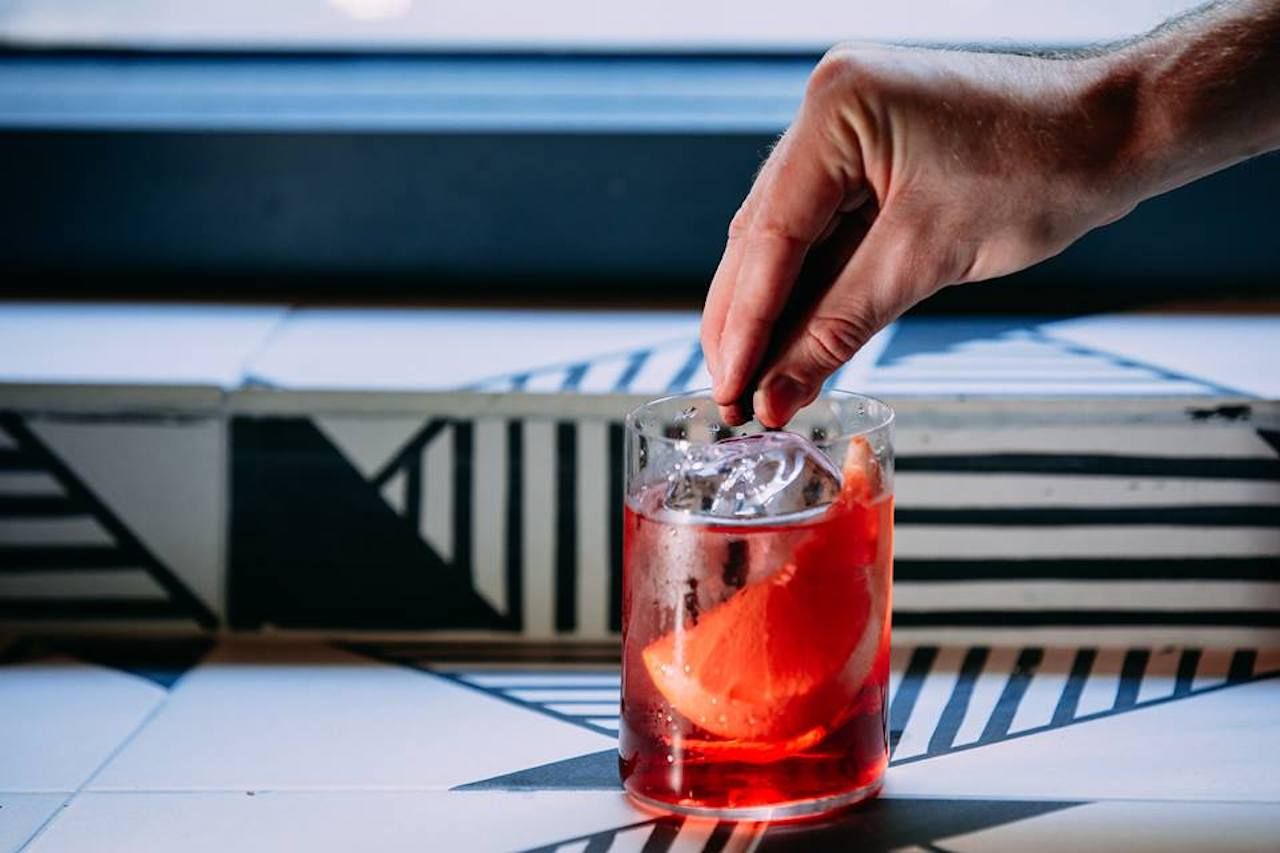 Jaguar Sun — Downtown Miami is slowly but surely finding its niche in the city’s legendary nightlife scene, and a big step forward is this little bar in the lobby of the X Miami apartment building. Though it looks small, Jaguar Sun has hands down the best craft cocktails on the Miami mainland.

E11even — Do yourself a favor: If you go to this downtown mega-club that’s open 24 hours, set an alarm on your phone for 6:00 AM that says “Go home!” Because once you get sucked into the vortex of E11even – where topless dancers have garter belts and g-strings for your buck-tucking enjoyment – you may not look up until it’s time for lunch. Don’t you dare call it a strip club either. Despite the half-naked women and dollar bills floating in the air, owners are adamant that it’s not a strip club.

Mama Tried — A lot of bars pay lip service for being “for locals” and then charge $8 for a Bud Light. Mama Tried puts its money, or lack thereof, where its mouth is. Drinks go for as little as $10 (a steal in Miami), and during happy hour, you can find them for as little as $5. Despite its location in sometimes-empty downtown, you’ll still find it teeming with service industry types and cost savvy locals pretty much every night.

Sugar — The best way to experience the magic of Sugar without blowing your entire vacation budget is to come here about 20 minutes before sunset. You’ll see the spectacular view of the sun setting over the Everglades and the twilight colors reflecting against the glass skyline. Then, as the sun goes down, you’ll see Miami turn into a city of lights – all in the time it takes to have two drinks. Which will still set you back about $35 but won’t give you sticker shock like it might if you hung around longer. 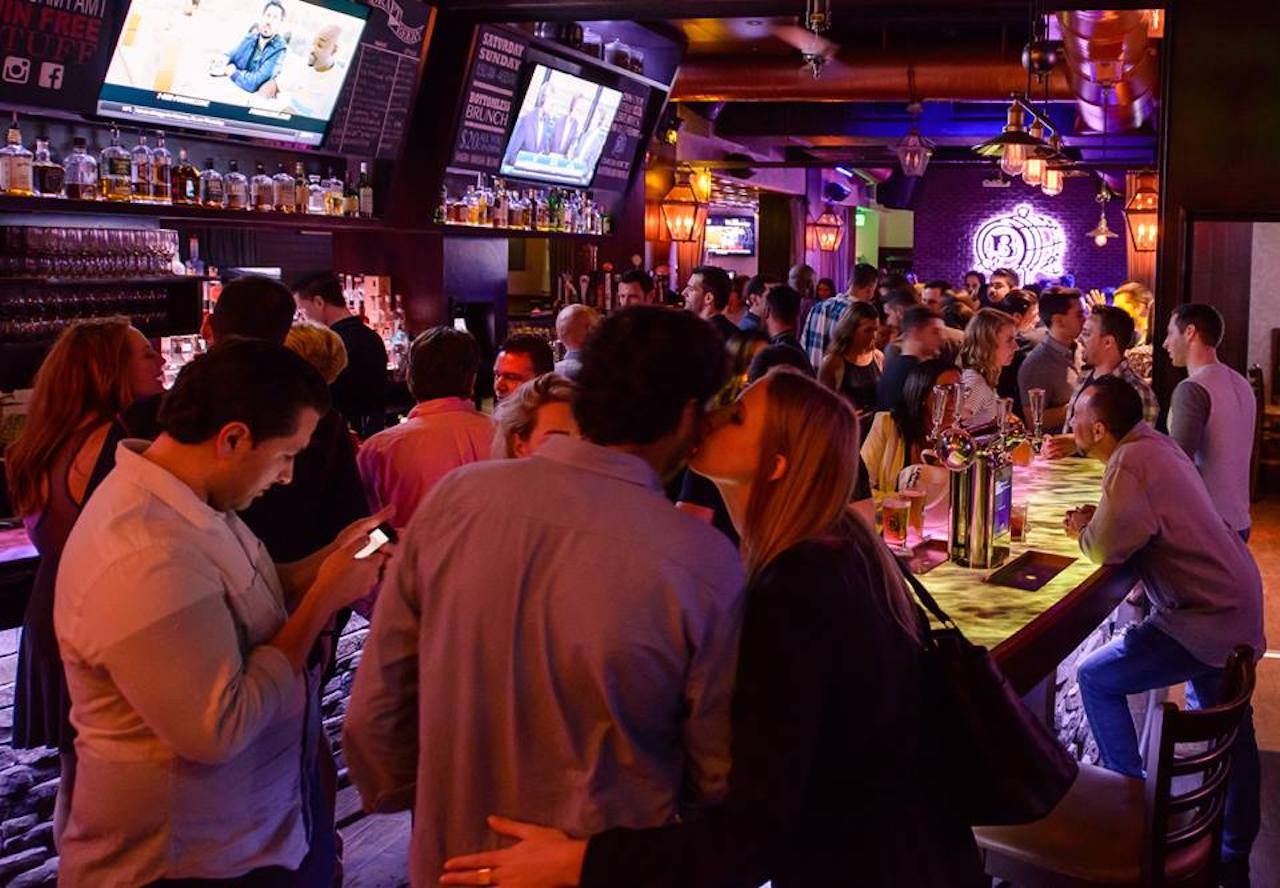 Batch — Miami’s densely packed Brickell neighborhood is surprisingly underserved when it comes to bars, so Batch has to play triple duty as a go-to for locals. By day and early evening it’s the place to watch sports, but as soon as the final score hits, it turns into a packed nightspot full of all the good-looking professionals who call Brickell home. When it’s not a sports or nightlife hub, it’s a pretty solid cocktail bar where you can pour margaritas and Old Fashioneds from a tap at your table.

Blackbird Ordinary — For craft cocktails in Brickell, nowhere comes close to Blackbird, a dark, funky space with a spacious back area that frequently has live bands, dancing, and the occasional boxing match. If you can hit this popular spot on a weeknight, cozy up in one of the big booths and try the original Blackbird with sweet tea vodka, blackberries, and lemonade. It’s only $10, a downright bargain by Miami standards. Or for something spicier, get the Tipp Topp: Vida mezcal, passion fruit, lime, agave, and Yucateco. 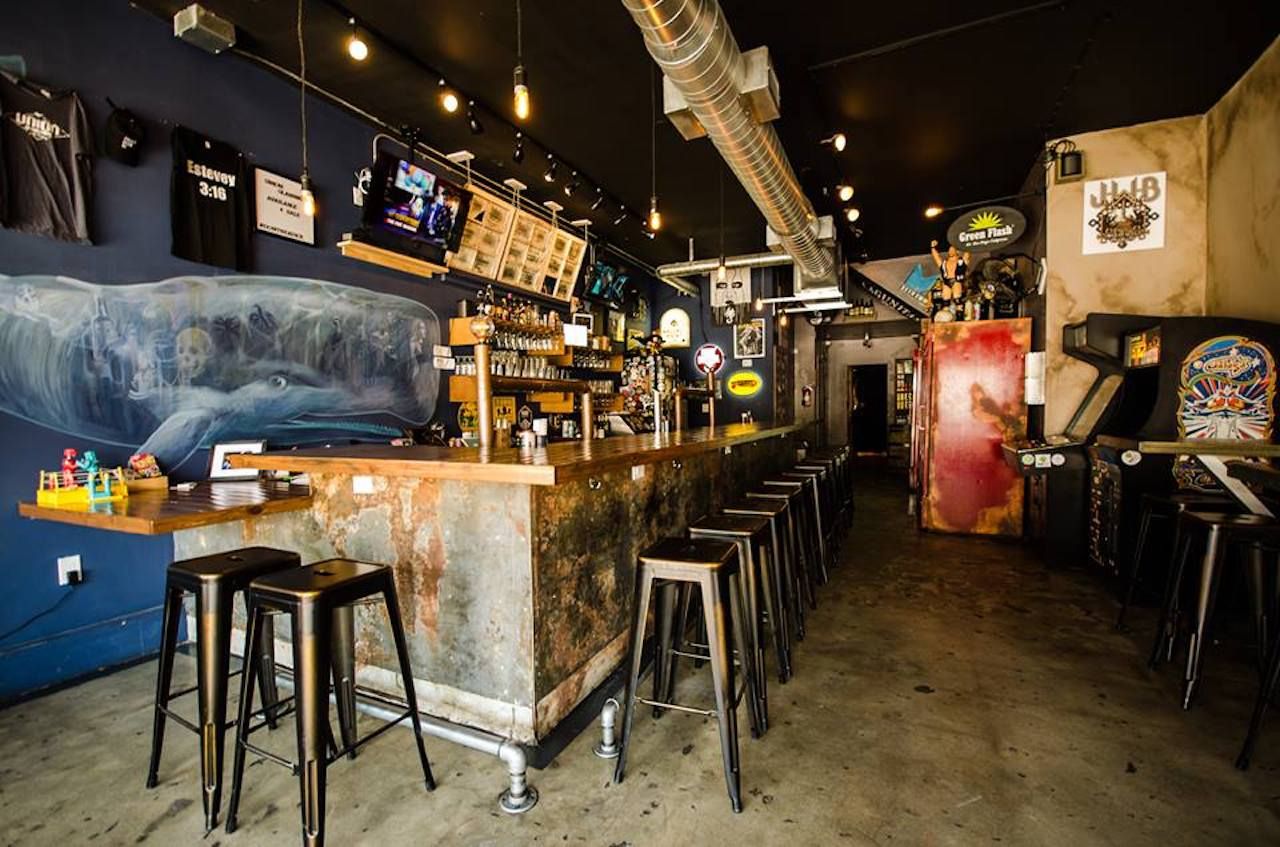 Union Beer Store — Nothing goes better with an ice cold beer than watching WWF Summerslam ’91 on a 16-inch TV. At least, that’s the theory at this wrestling-themed Little Havana beer bar where a massive collection of South Florida’s best local beers is complemented by wrestling action figures, classic wrestling matches on TV, and bartenders who know way more about Ric Flair than any human being should.

Ball and Chain — What was once an after-hours jazz venue for the likes of Billie Holiday and Tommy Dorsey has been restored to its former glory. Ball and Chain now boasts live music under a pineapple-shaped bandshell on a tropical back patio. The interior looks just like it did 80 years ago, even down to the oversized booths and vaulted ceilings made of Dade County pine. Only now, it serves a menu full of stuff like papaya mojitos and pastelito daiquiris. 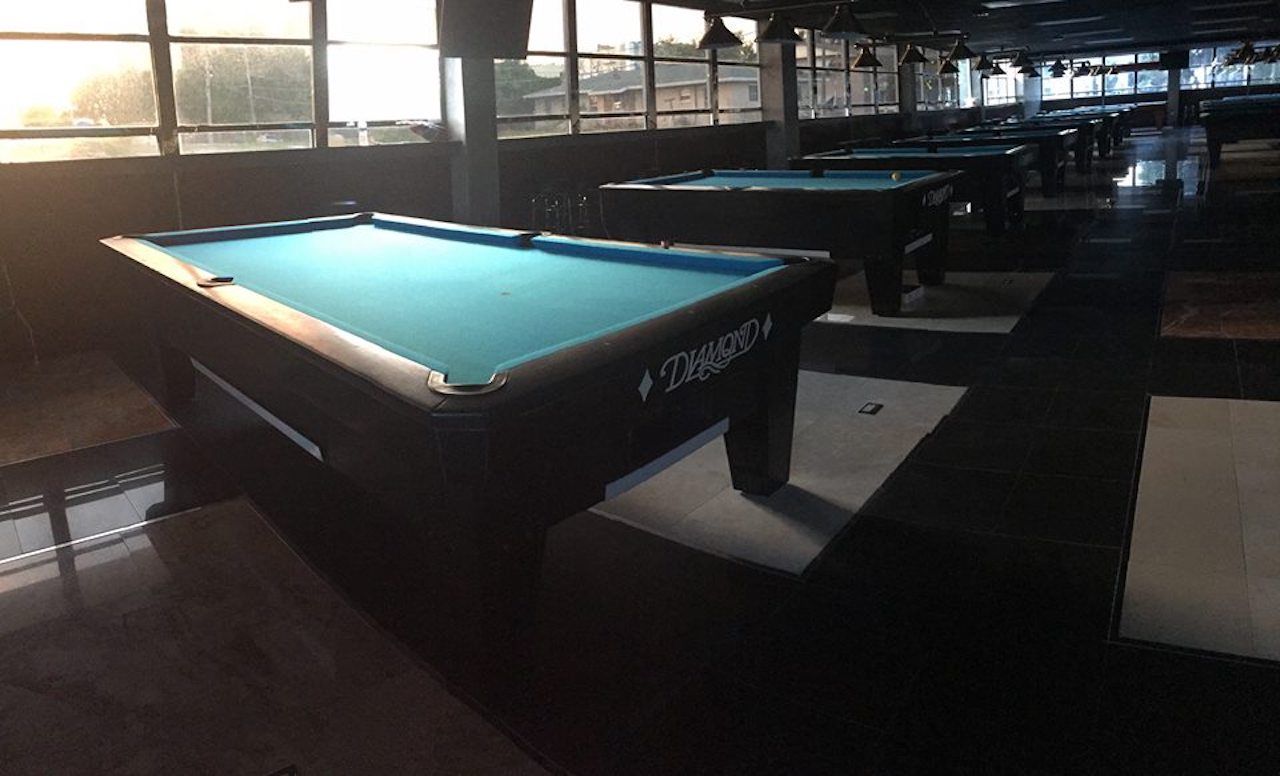 K&K Billiards — Sometimes all you want is a cold beer and a couple relaxing games of pool. K&K is here for you. The bar has a long beer list and 15 tables. You can play as much as you want for as little as $5 an hour on weekdays, and $12 an hour on weekends. Whether you’re a hustler, burgeoning hustler, or someone looking to get hustled, you’re going to have a good time and escape the normal bar crowd.

The Anderson — If you’re longing for the days when you got home, played Super Mario Brothers, watched a little Saved By the Bell, and capped the night off with a screening of The Goonies, then The Anderson is your spot. The drink menu in this dim, red-lit spot on NE 79th Street is full of drinks inspired by 1980s and 90s pop culture. Plus there’s a pretty solid bar food menu with stuff like buffalo cauliflower and jerk chicken quesadillas. If all that doesn’t cut it for you, there’s a tiki hut in the back. 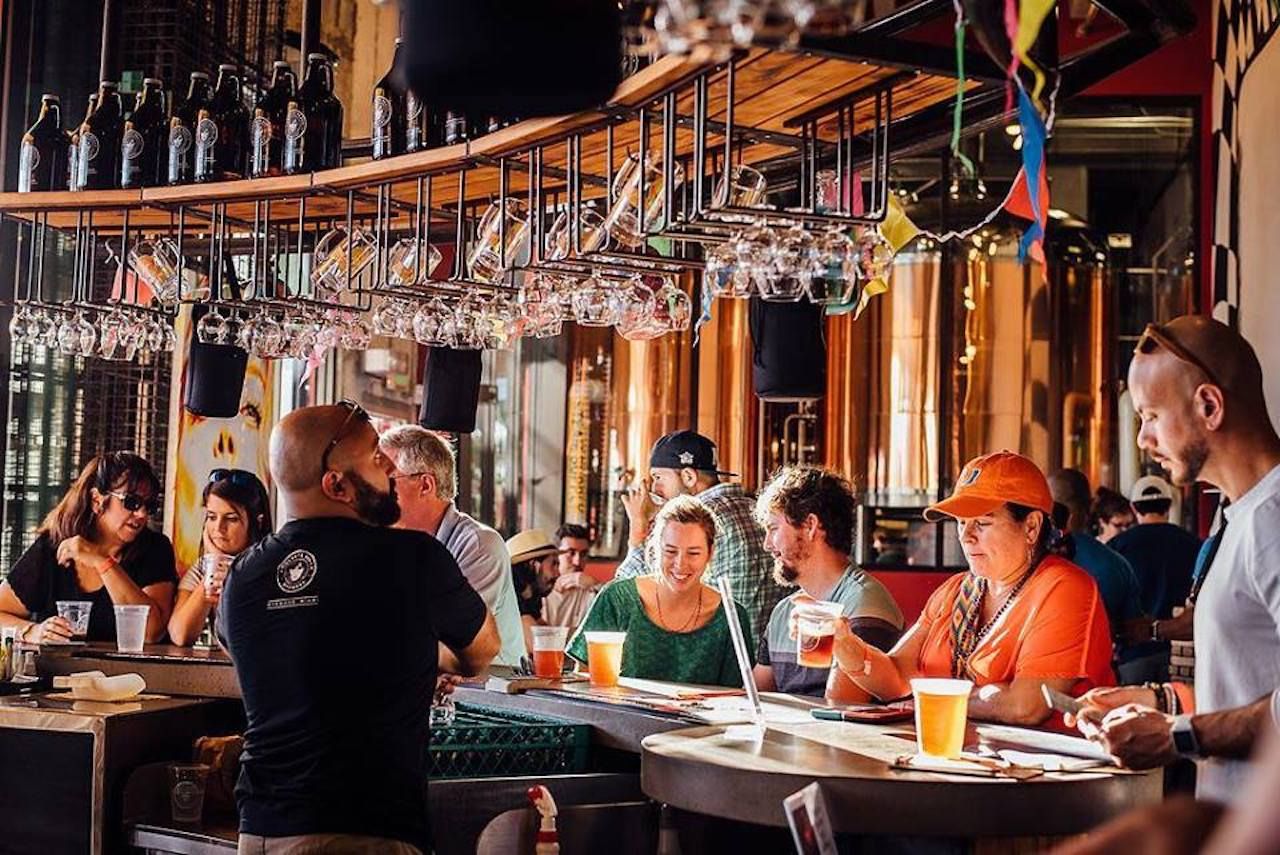 Wynwood’s Brewery Row — One of the best ways to spend a sunny Sunday in Miami is hopping through Wynwood’s most acclaimed breweries. Instead of picking one and posting up, start the day at J Wakefield, which many consider the best craft brewery in the city. Once you’ve had a Dragonfruit Passionfruit Weisse in this Star Wars-themed taproom, stroll over to Wynwood Brewing and have a Pops Porter at Wynwood’s oldest brewery. Then it’s just a short walk to the big social hall at Concrete Beach where you can sip a Stiltsvilel Pilsner in the sun. Finally, move on to lounge on the big couches and pound Latin American-style beers at Veza Sur.

Gramps — Wynwood bars have a tendency to take themselves a little too seriously, but Gramps understands that people don’t come out to get ignored by bartenders and/or pay $18 for a mojito. They do, however, come out to do stuff like play Drag Queen Bingo and eat surprisingly good pizza and wings while they drink. The bar is just plain out fun with a big courtyard and a creative drink menu. It’s a place that never feels too crowded but always feels welcoming.

Boxeldr — Once you’re done running art galleries in New York City, the only logical progression is to open a beer bar, right? It does if you’re the people behind Boxeldr, which, in addition to stocking the best selection of craft and import beer in Wynwood, also has provocative art lining the walls. 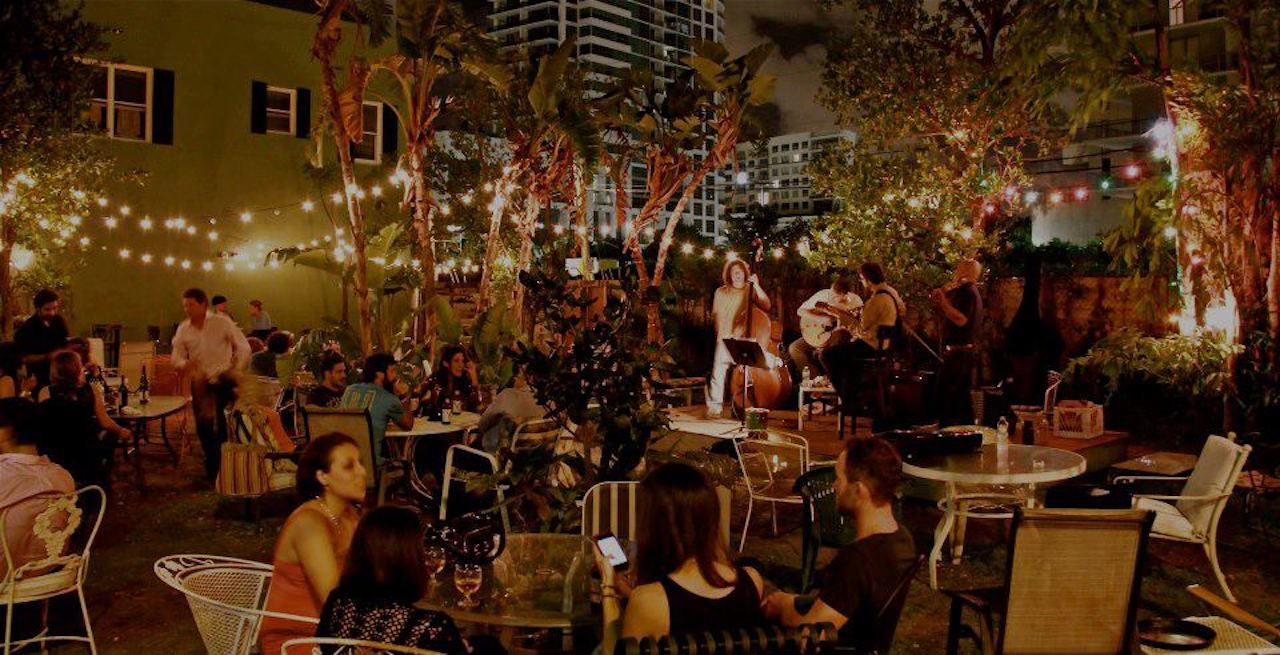 Lagniappe — Theoretically, you could grab a bottle of wine and sit in a backyard full of mismatched furniture and Christmas lights on a random Tuesday at home. Of course, you probably wouldn’t have a live jazz band or a guy grilling ribs, nor hundreds of people who prefer drinking wine outside rather than cramming themselves into clubs. At Lagniappe, you can grab a reasonably priced bottle from the wine store inside, get a couple of glasses, then lounge on old patio furniture in the back for as long as you like. It’s one of the most relaxing drinking experiences in Miami. 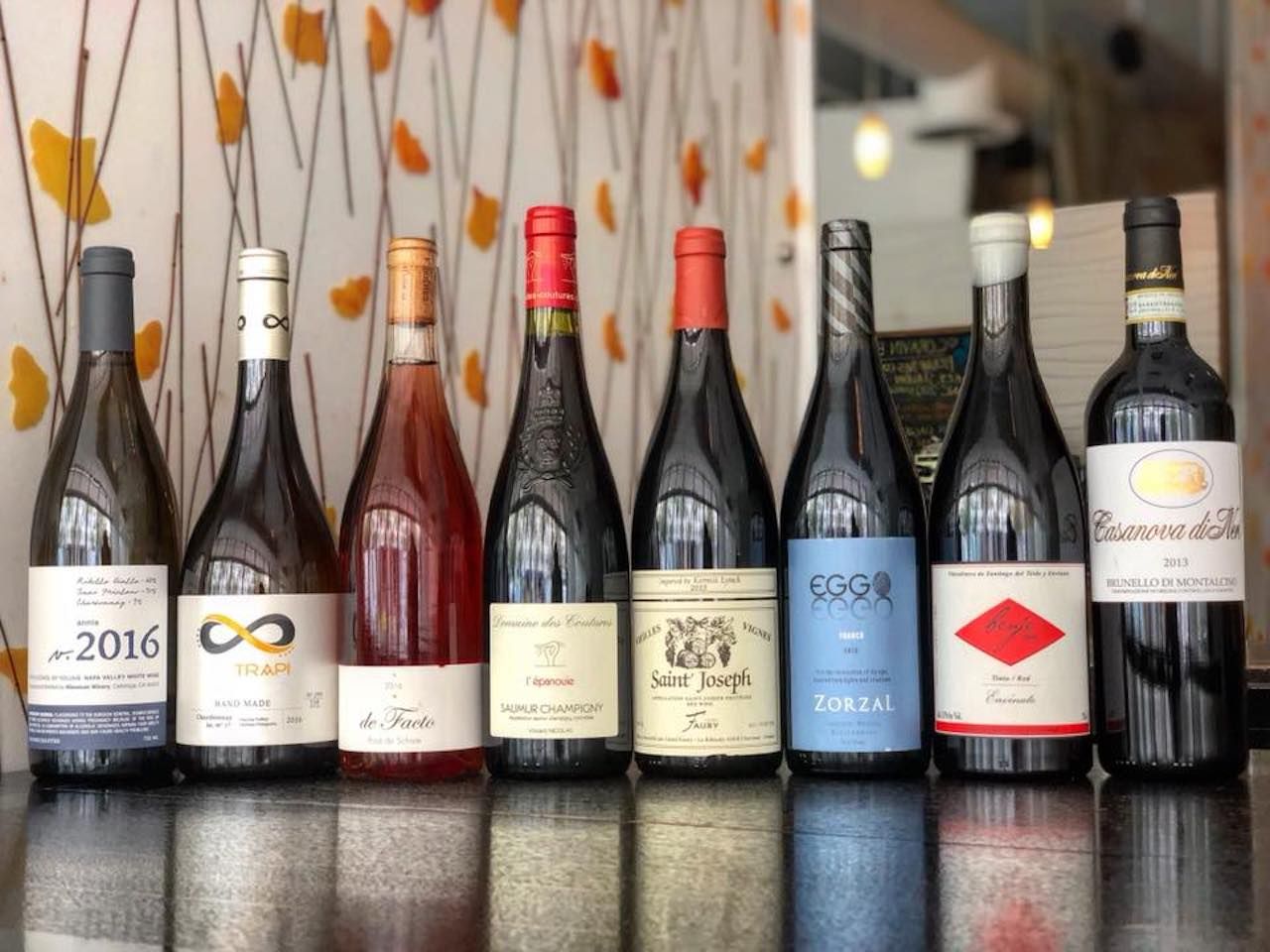 Uvaggio — Miami’s best wine bar is, without competition, actually in Coral Gables. Here, wine savant Heath Porter, who formerly helmed the wine program at The Greenbrier, has curated the best wines from around the world and helped develop a menu of food to pair with them. The result is the first restaurant to pair food with wine, instead of the other way around. Even if you’re not hungry, stop in for a glass of something you’ve probably never tried. You might just find a new favorite.