Visiting Miami now means a lot more than just finding a hotel near the sand and plopping yourself down for a week. Now that the city has grown up and its neighborhoods and the hotels in them offer a lot more than just a place to wash off the sunscreen. Even youth hotels in Miami have trendy cocktail bars, and no matter what your price range, there’s a hotel in Miami that can add significantly to your experience. Whether you’re traveling here for business or vacation, want to explore the city or lay on the beach, figuring out where to stay will shape your trip unlike anything else. Here’s a selection of the best hotels in Miami’s most popular neighborhoods.

Author’s Note: You may notice we haven’t included any Airbnbs or VRBOs in this guide. The topic has been broadly discussed in Miami over the past few years, with hosts receiving fines for renting their homes short-term. As the local economy is highly dependent on tourism, this city has discouraged Airbnbs, though they are available. 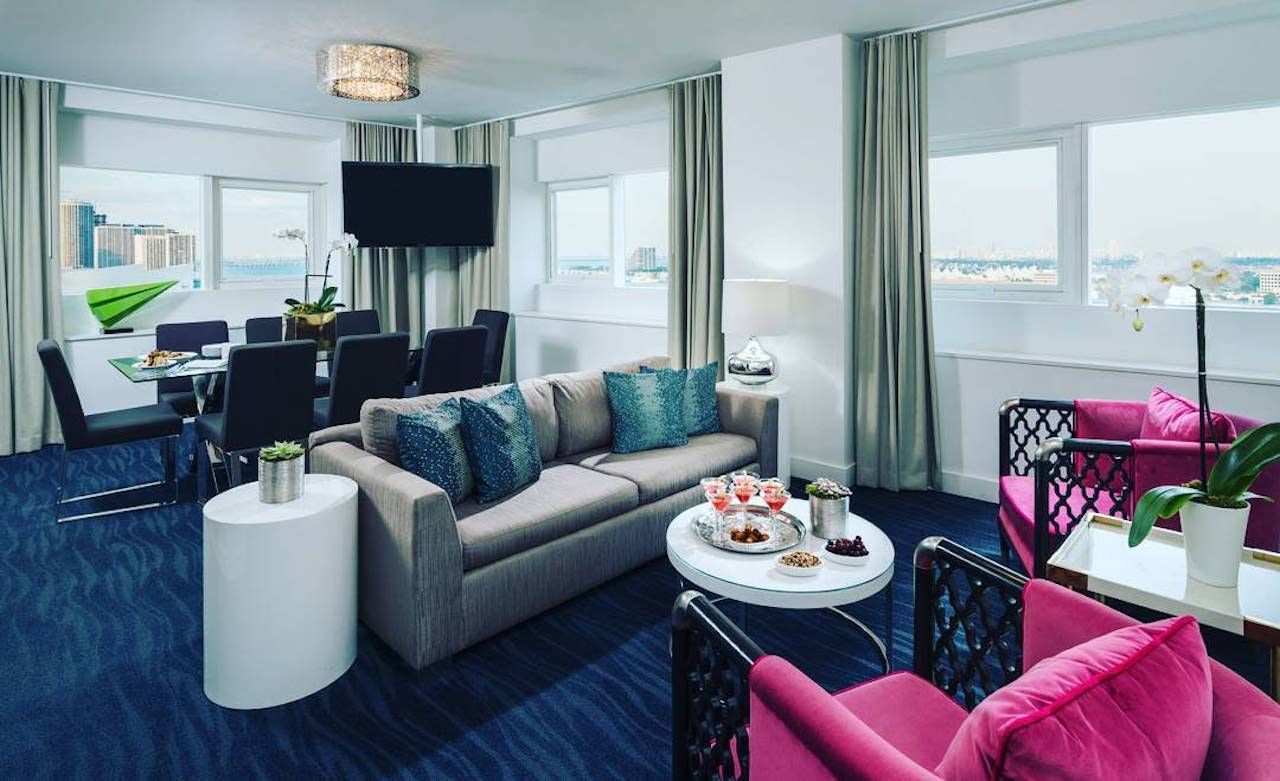 YVE Hotel — You may not find a better location for the money in all of Miami than the ultra-modern YVE. The rooms are a little small, but its location across the street from Bayside Marketplace downtown puts you 10 minutes from South Beach, Wynwood, and Brickell, and a short walk from the American Airlines Arena and Museum Park. Plus, if you don’t feel like leaving the hotel, Biscayne Tavern on the ground floor has some of the best bar food in the city.

The Julia — This art-deco boutique hotel is named after Miami founder Julia Tuttle and is filled with original artwork and historic artifacts of the city. The adults-only, 29-room property has a selection of rooms with paper cranes dangling from atrium ceilings, and a nightly happy hour with free wine, cheese, and crackers. It’ll also save you $20 on beach chair rental, as The Julia loans you one for free to take the short block to the sand. 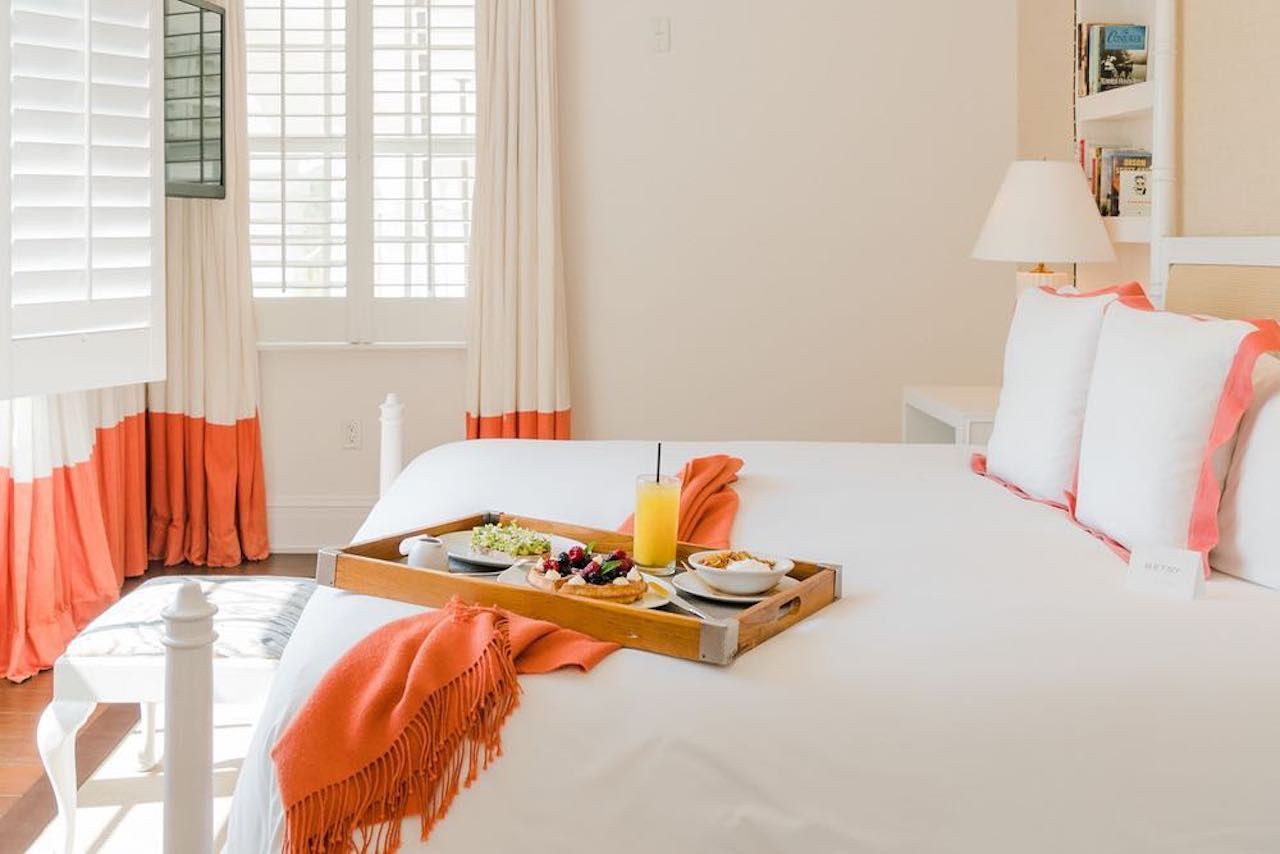 The Betsy — There’s tough competition for boutique hotels in South Beach, but The Betsy is an architectural anomaly. The white colonial structure is filled with local art and has a swanky rooftop event space. It also has one of the best steakhouses in Miami at LT Steak and Seafood.

Hotel Urbano — This hotel right before the entrance to the Rickenbacker Causeway might not be perfectly convenient to the bars and restaurants of Brickell. But if you have a car you’re about a block from the entrance to I-95 so it’s the perfect home base if you’re planning to explore South Florida. 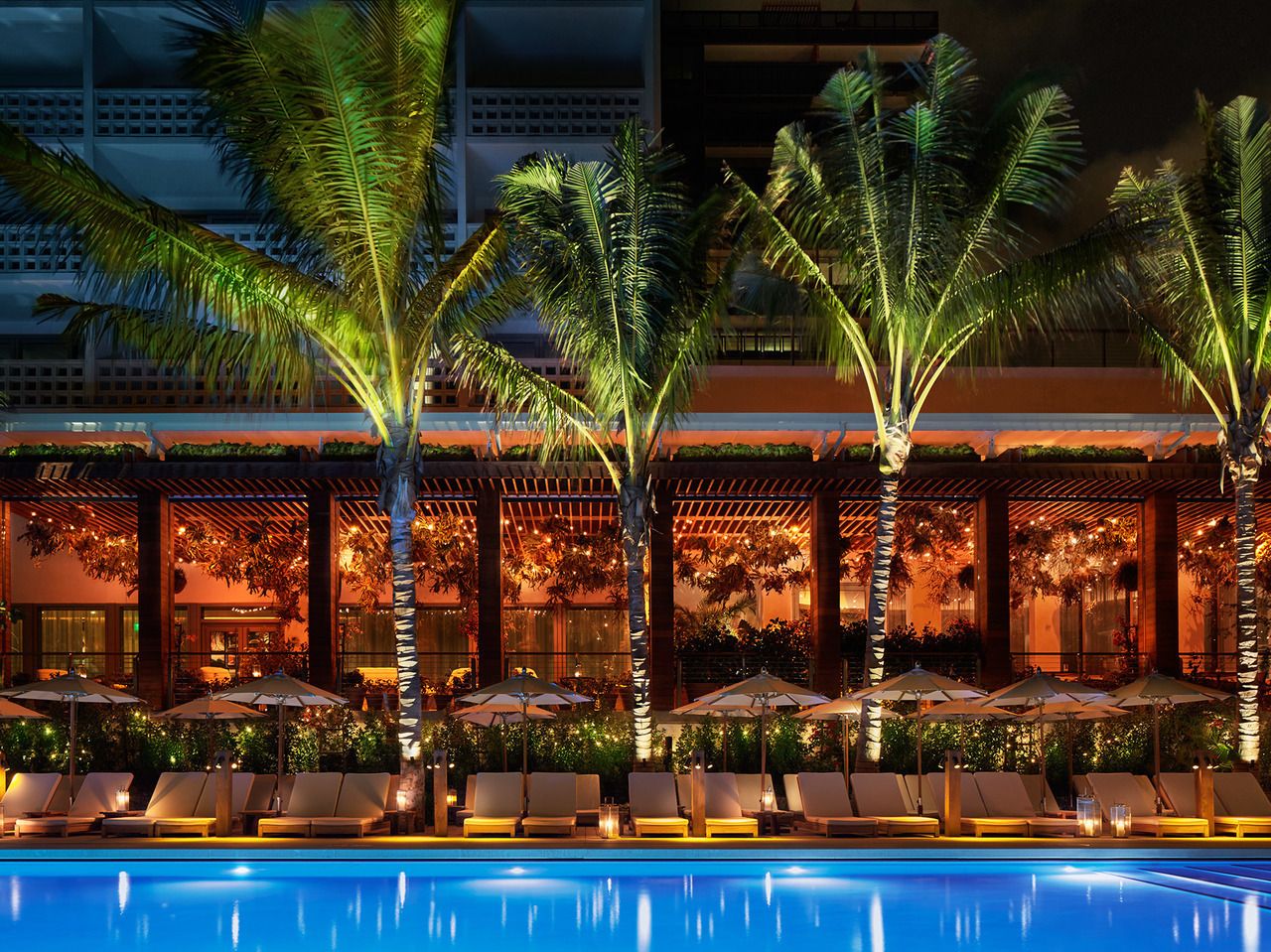 EDITION — Put aside for a moment that this art deco palace has restaurants run by Jean Georges for both high-end dining at Matador Room and quick sandwiches and pizza at Market. That alone would make it worth your stay. But the basement makes it one of the best entertainment venues in the city with a nightclub, a bowling alley, and an ice skating rink.

AC Hotel — Marriott’s new-ish lifestyle brand opened up shop in the condominium motherland of Aventura this year, giving a jolt of young energy to the typically-geriatric neighborhood. The new AC Hotel is a short drive to the beach, nearly walkable to Gulfstream Park, and a short shuttle ride to all the shopping at Aventura Mall. 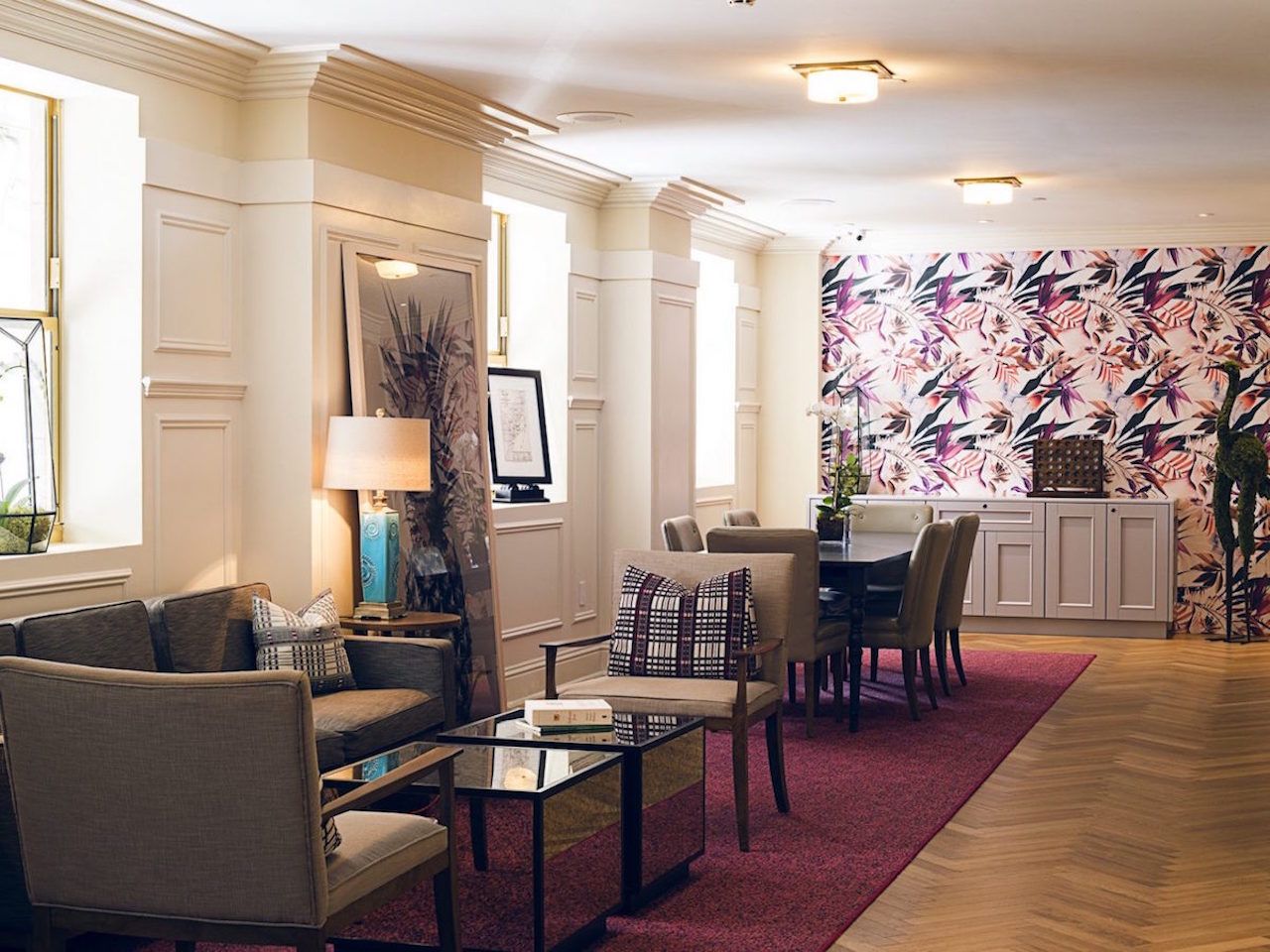 Eurostars Langford — The Langford is the lone downtown hotel that places you in a piece of the Miami of yesteryear. It sits in a bank building dating back to 1925, with classic touches like old elevator dials and marble accents throughout. The rooftop bar — Bloom Skybar — puts you in the middle of the Miami skyline and is a perfect place to relax for drinks after a long day. 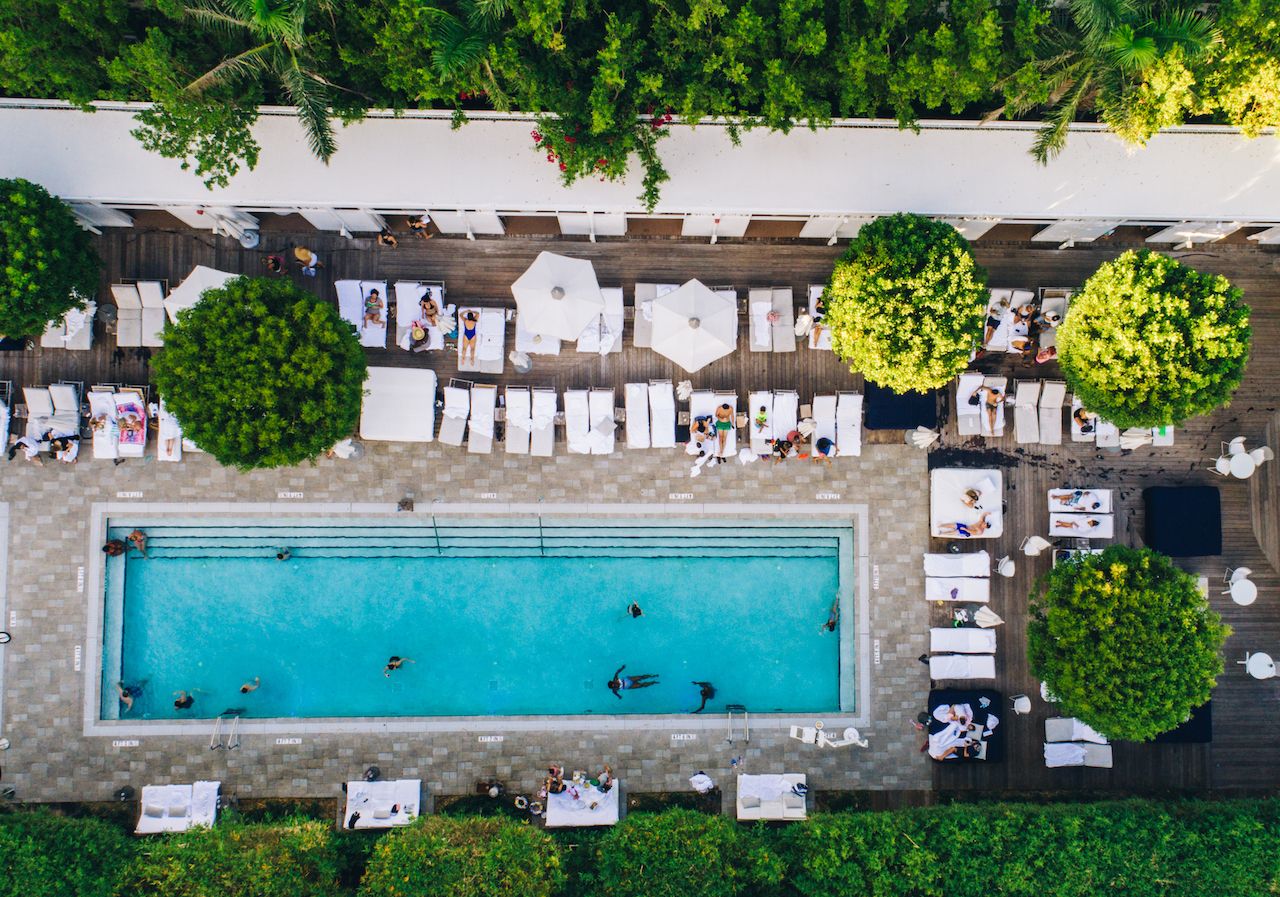 Nautilus — This old South Beach gem, originally designed by Miami Modern godfather Morris Lapidus, got a refresh a few years back and has turned itself into one of the top beach hotels in Miami. Start with the saltwater pool, where guests can get the same silky, natural feel they might by dipping in the ocean without having to cover themselves in sand. The pool deck is sprawling, with food from Nautilus Cabana Club that’s best enjoyed during its epic Sunday brunch. The lobby is almost a work of art in and of itself, with big, flowing curves, leather furniture, and a sunken bar with a daily happy hour where you can almost afford the drinks. While the Nautilus is sometimes overshadowed by bigger names along Collins Avenue, it’s a solid pick if you’re looking to stay on the sand. 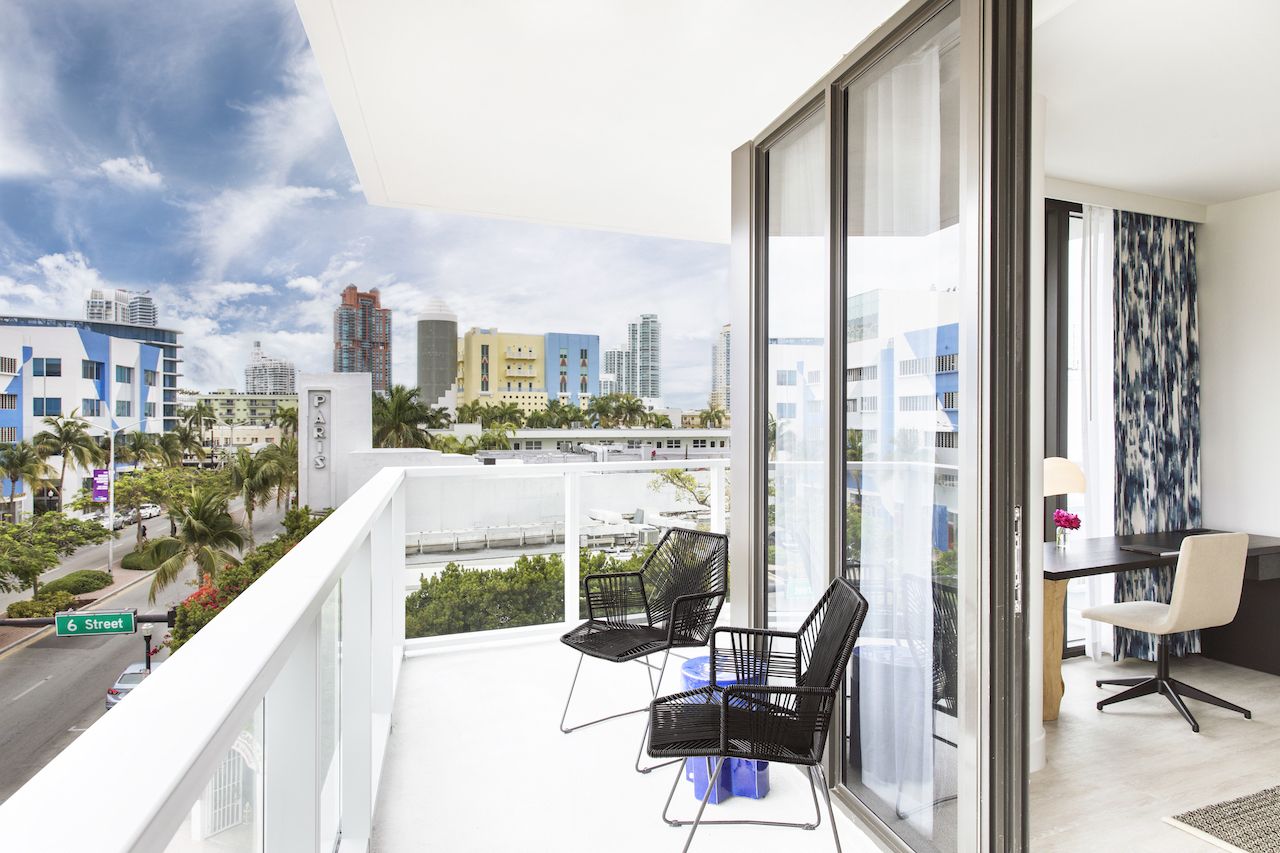 Kimpton Angler’s — The boutique Angler’s Hotel recently got a big money makeover when Kimpton took over the controls, and the changes have immediately placed it in the upper echelon of South Beach digs. Start out with the relaxing rooftop pool, where you can grab a craft cocktail from the Minnow Bar downstairs and enjoy it in the warm South Florida sun. The Angler’s has also upped its fitness game, offering guests complementary passes for a nearby OrangeTheory, plus yoga mats in every room and a yoga TV channel. But the real highlight isn’t even on the property: The hotel teamed up with the University of Miami to adopt a coral reef off the shores of Miami Beach, which you can visit during a half-day Rescue-a-Reef excursion. 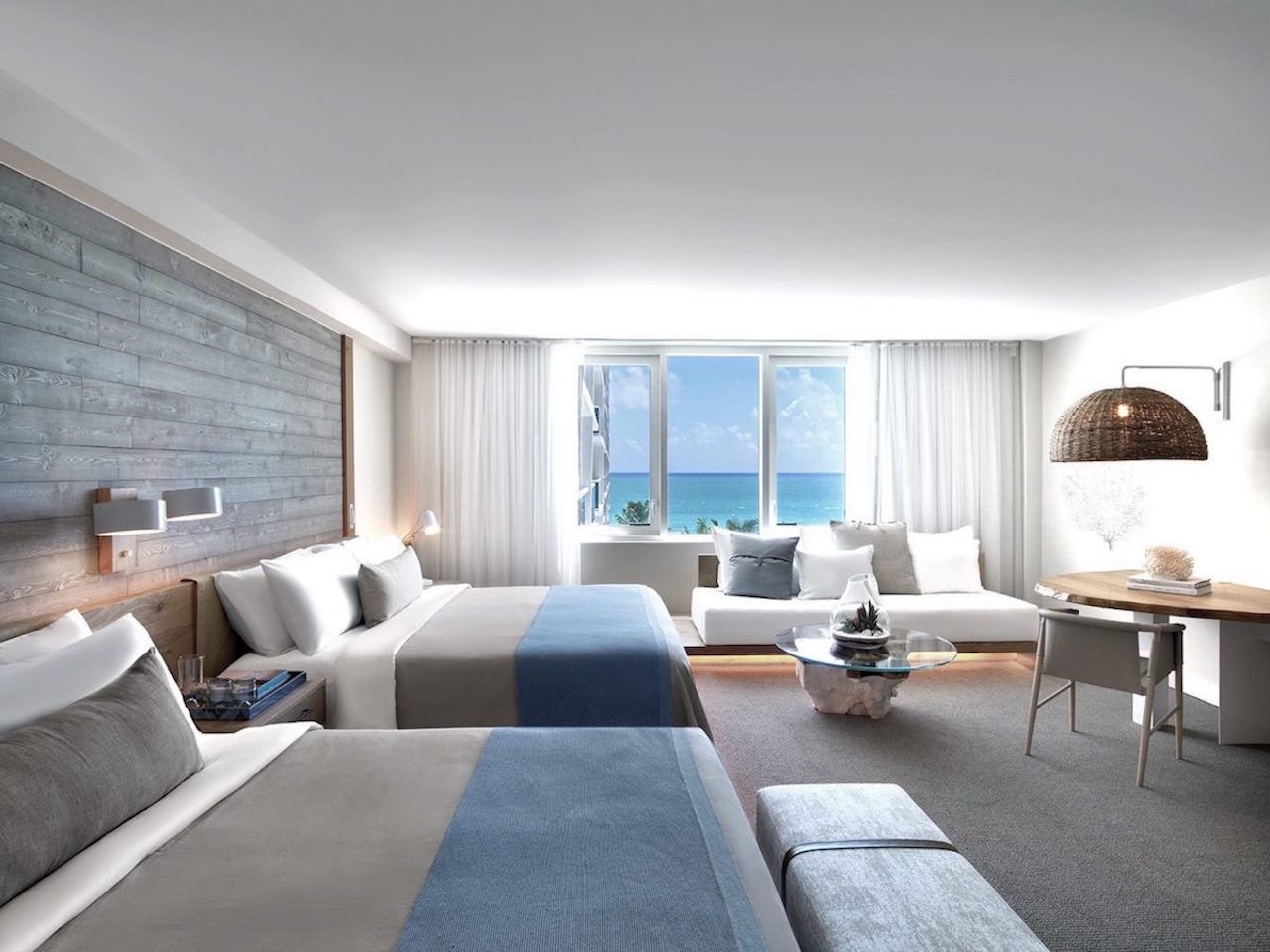 1 Hotel — A couple of years ago the former Gansevoort reopened as the eco-friendly 1 Hotel, done up in soft greys and light woods with the soft scent of forest in the lobby. The rooftop pool, however, is the crown jewel, with sweeping views of the Atlantic Ocean to one side and the Miami skyline to the other. The lobby also houses Habitat, the first hotel restaurant of local favorite chef Jose Mendin. 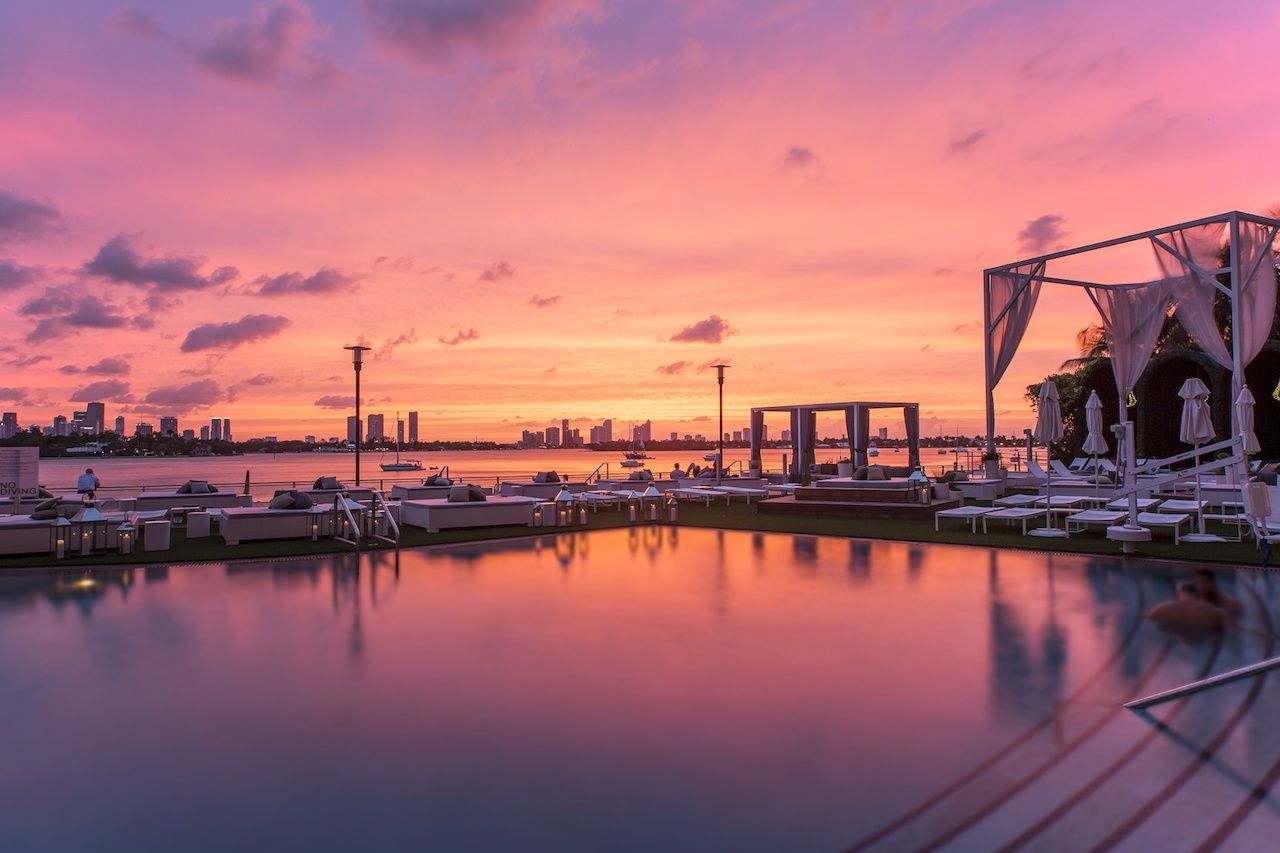 The Mondrian South Beach — The inherent problem with beachfront hotels in Miami, if you ever dare to complain about being at a beachfront hotel in Miami, is that during high season, the sun has dipped behind the hotel by 1:00 PM, and you’re left to spend the rest of the day sunbathing in the shade. Not so at the west-facing Mondrian, where this luxe space has a crescent-shaped pool right on Biscayne Bay, with spectacular views out over the Miami skyline. This means the sun hits the pool all afternoon, and you can enjoy the live DJ and swanky cocktails all the way to sunset. The rooms aren’t bad either, as this converted apartment building offers many junior suites with kitchens and big, spacious balconies to watch the sunset from.

Marriott Stanton — It’s not high luxury in the sense of having butler service or a five-star rating, but if you’re looking to stay somewhere nice in SoFi, the Stanton can’t be topped. It’s got a Miami outpost of Michelin-starred Azabu in the lobby, plus a taco shack at Lolo’s Surf Cantina on the side and a Starbucks in the lobby. It’s also the only hotel in SoFi with sprawling oceanfront balconies and direct beach access from the pool. 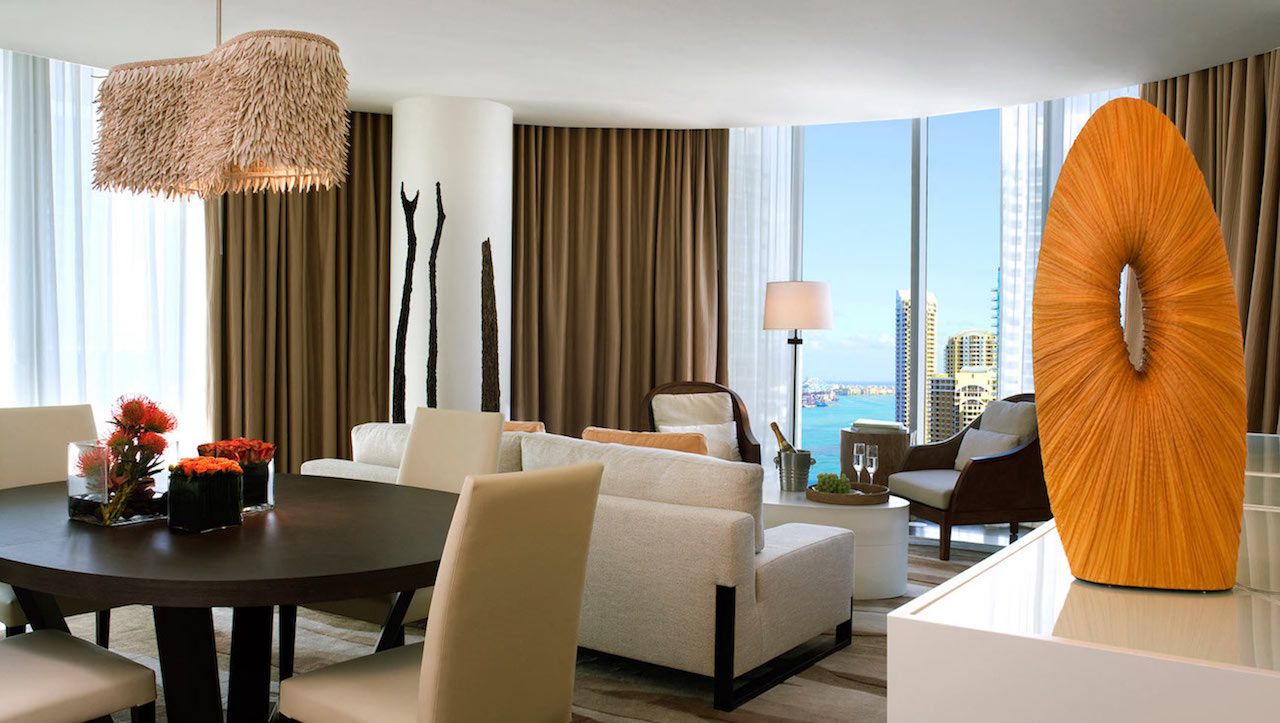 Kimpton Epic — Kimpton Epic’s name doesn’t overstate its grandeur, where, if you can survive the valet parking line, you’ll find downtown Miami’s most impressive address. Let’s start with Zuma, the robata grill dining hotspot that sits just off the Epic’s lobby. On the 31st floor, you’ll find Area 31, a sprawling pool deck, bar, and restaurant with spectacular views of the city. Add in spacious rooms with views over Biscayne Bay and the city skyline and you’ve got the best all-around hotel in mainland Miami.

Four Seasons at the Surf Club — This spectacular new highrise set atop the historic Surf Club offers unparalleled front row views of the ocean. Its spacious suites boast floor-to-ceiling windows and Bose speakers in the shower, and Thomas Keller just opened his newest restaurant in the lobby. The main bar — La Sirenuse — has frescoes on the wall and fine-dining Italian food before dark, and even if you can’t afford to stay at the Surf Club, it’s worth going for a drink and live music at night. 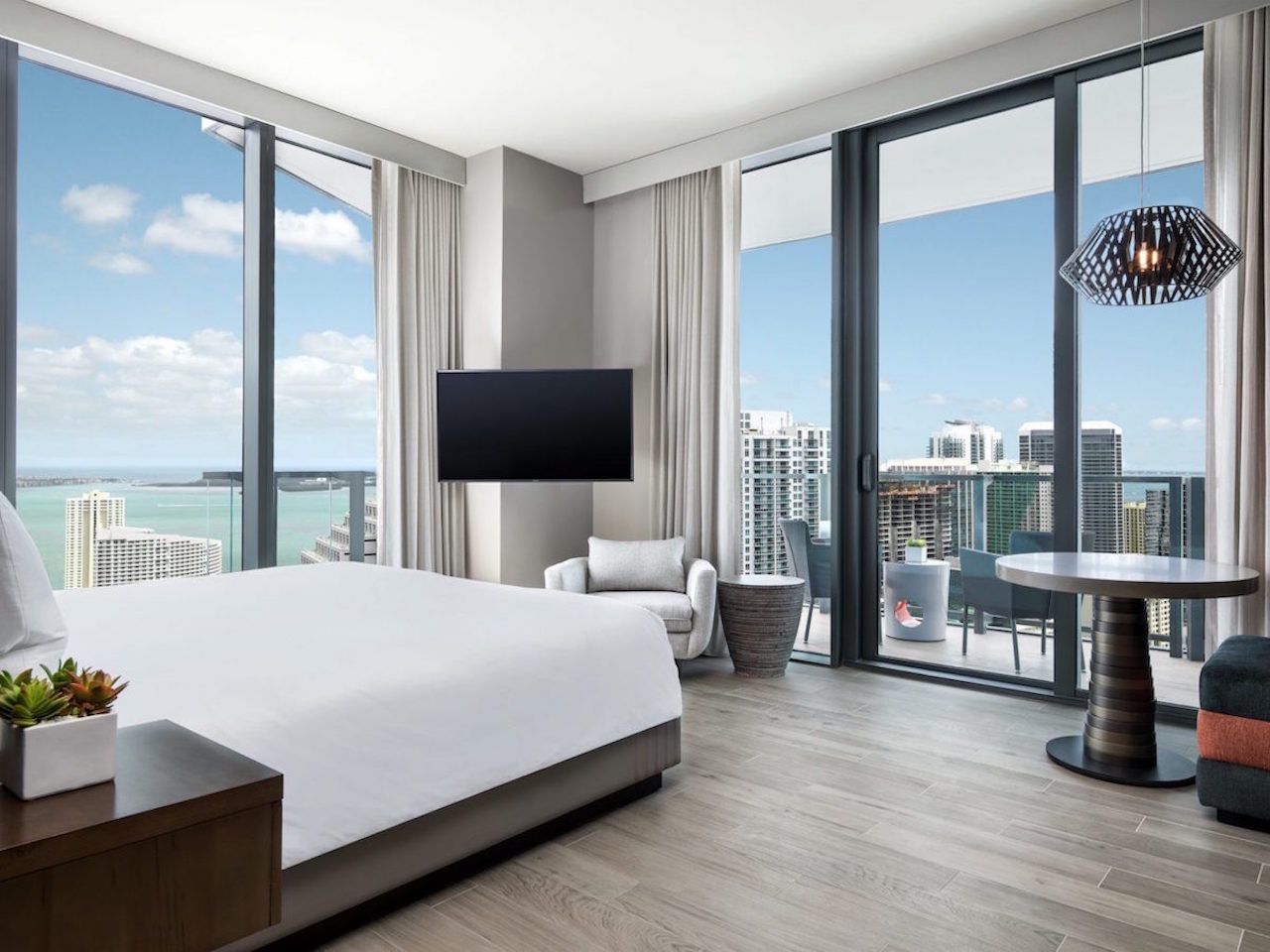 East Hotel — The towering Brickell City Centre has transformed Brickell into a luxury destination for people all over the world. And nothing announced this louder than the East Hotel, where trippy Lite Brite elevators lead up to one of the best rooftop bars in the world at Sugar. Here you’ll find views from the Everglades out to the beach, with craft cocktails and Asian tapas. Then you can dine at Quinto la Huella, an Uruguayan steakhouse plating fire-grilled steaks.

Fontainebleau — This Morris Lapidus-designed landmark is home to the nightclub LIV, which, even if you’re not down for a night of untz-untz excitement, is a scene worth watching in the lobby. Fontainebleau’s pool is the stuff of South Beach legend and the restaurants — from Michael Mina’s Stripsteak to Scott Conant’s Scarpetta to Hakkasan — are hands down the best collection of any hotel in the city. 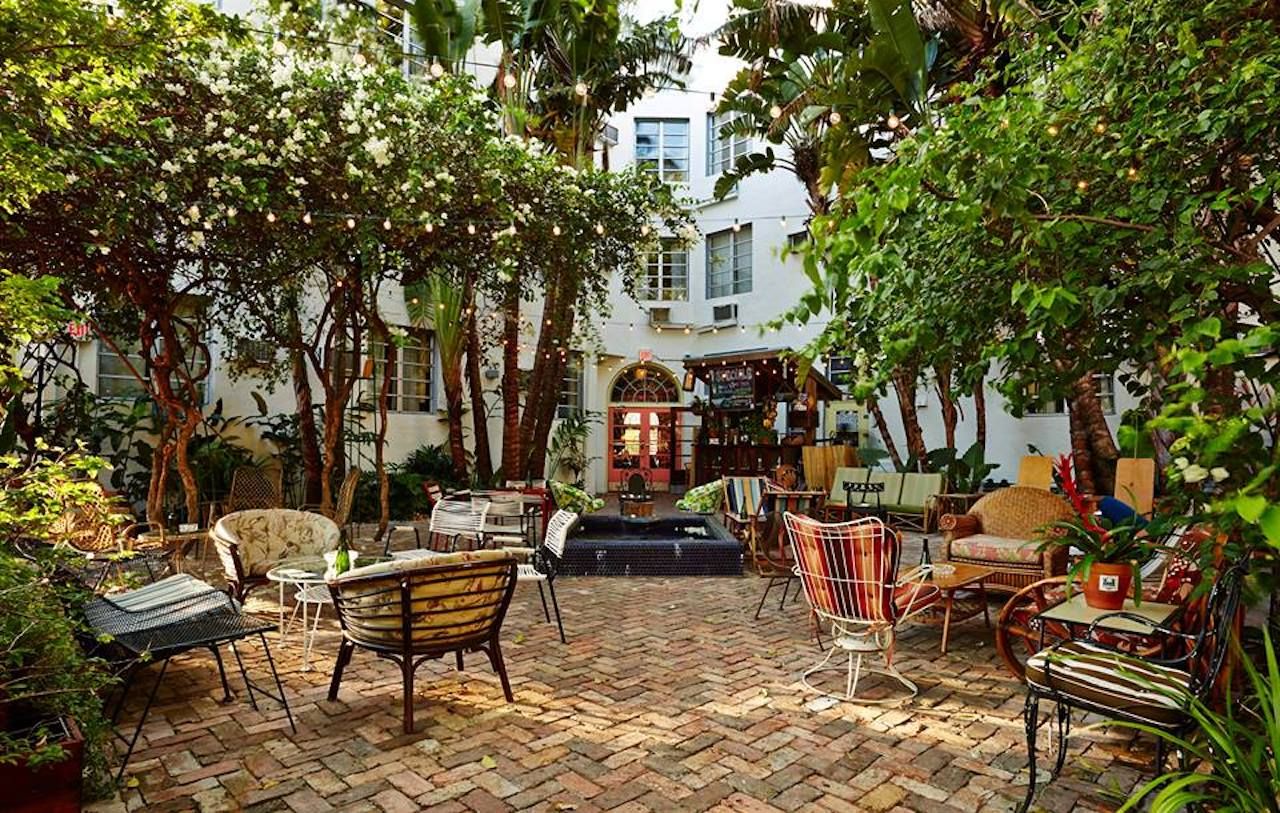 Freehand Hostel — The Freehand, though a clean, comfortable place to stay, is far better known for the bar in its courtyard than anything inside. Broken Shaker can lay claim to being the best craft cocktail bar in Miami, where you can get drinks made with herbs from the Freehand’s garden and sip them in a tropical courtyard or next to the pool.

Newport Beachside Hotel — In terms of discount digs, you won’t find a whole lot in Surfside, Sunny Isles, and Aventura. The closest thing you’ll find that’s clean is the Newport, a seaside resort with a slew of oceanfront rooms and a spacious tiki hut pool deck. In the lobby, you’ll find Kitchen 305, where from 5:30 PM to 10:00 PM you can indulge in all-you-can-eat lobster for $49.95. 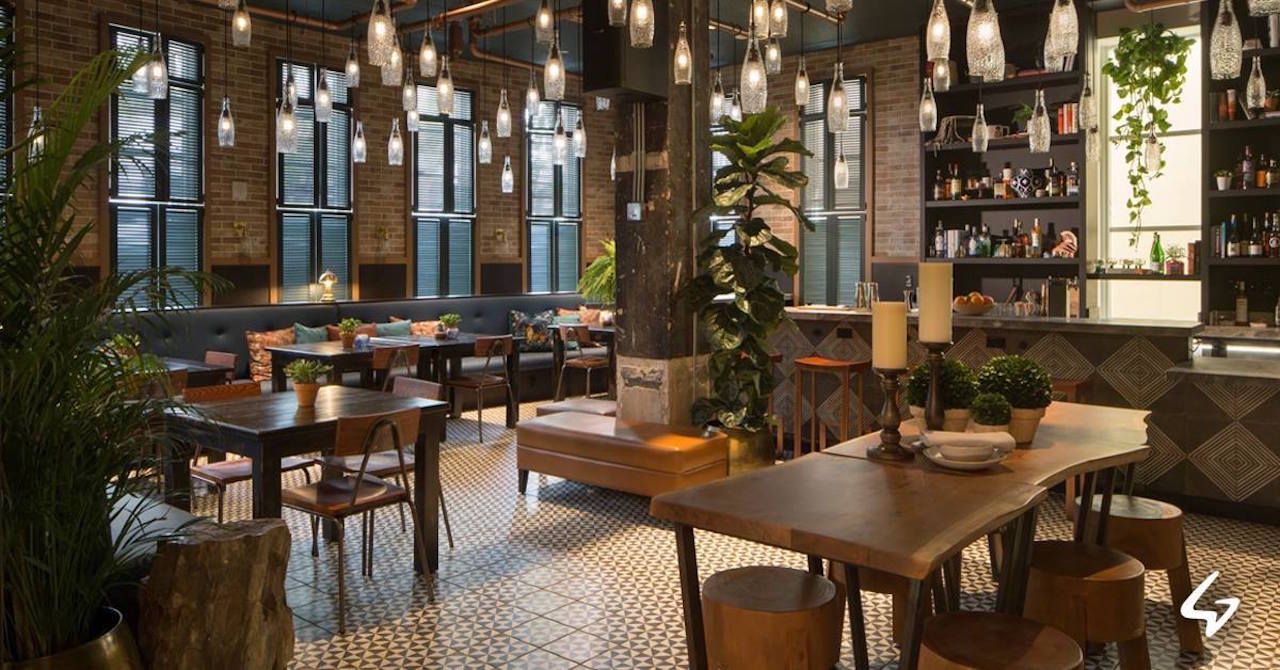 Generator Hostel — The wildly popular European lifestyle hostel Generator opened its first US hotel in Miami Beach in 2018, with a speakeasy-style cocktail bar in the lobby at the Jim and Nessie. The back pool deck feels more like a chic South Beach hotel than a hostel, with daybeds and a pool bar for your vacation-bragging enjoyment. The rooms are spartan — it’s still a hostel after all. But for the price, you won’t find anything better on the beach.

SoBe Hostel — Don’t stay here if you plan on getting any sleep, but this hostel right on Washington Avenue has one of the best value bars in Miami in its lobby, plus a front patio filled with young people from all over the world at all hours. It’s about two blocks from the beach, and while not luxurious, is always a lot of fun.