Out-of-towners generally picture Miami as a colorful conglomeration of white sand, art deco, neon lights, and guys in straw hats planning something illegal. And while the city and its characters definitely live up to their reputations, you’ll need to explore the whole of it to truly understand what makes it such a unique place. From the bright lights of South Beach to the miles of murals in Wynwood, we’ve got a lot to see you that won’t find elsewhere. Here’s your guide to Miami’s most popular neighborhoods, and where to eat, drink, and play once you get there. 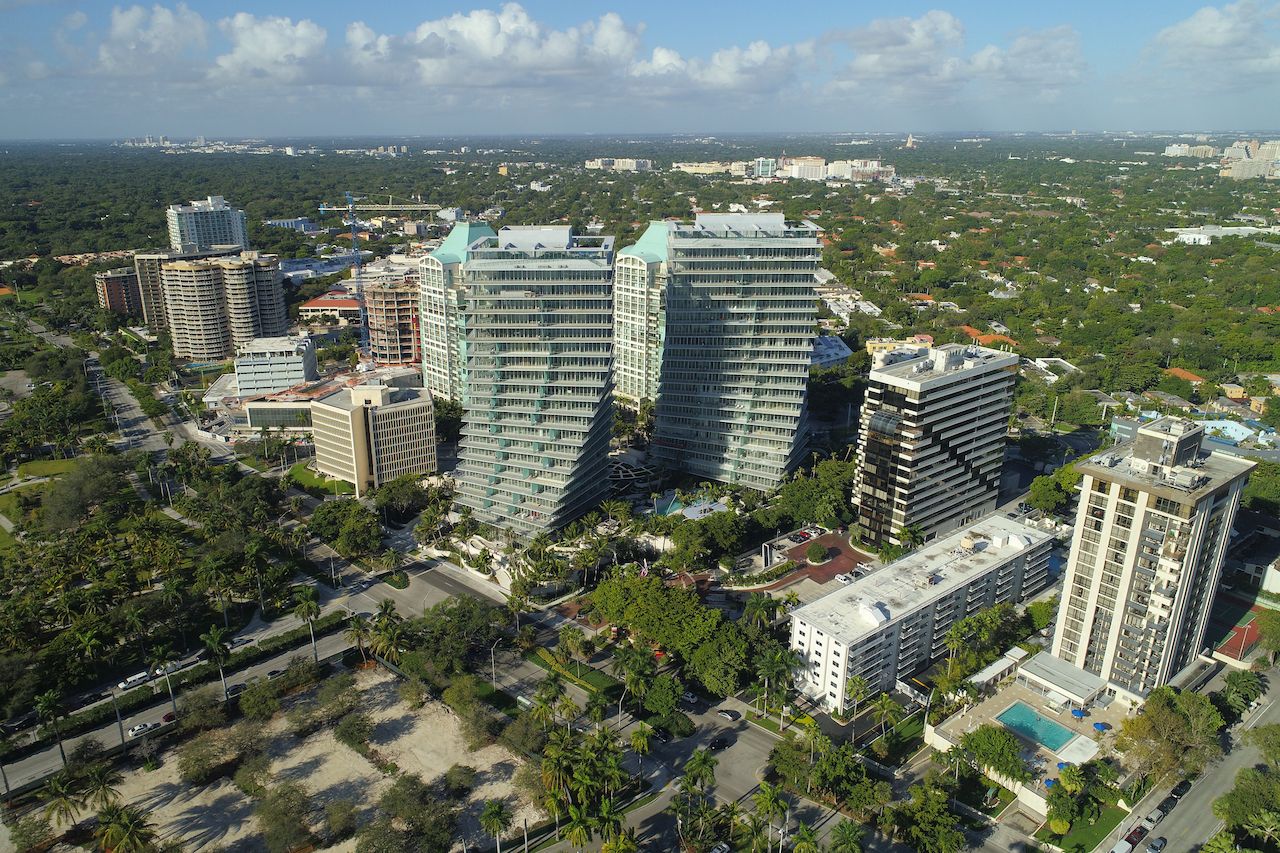 Coconut Grove — Strangely, you won’t find a lot of coconut trees here, as the neighborhood got its name when mail ships mistook it for another part of Miami that was, in fact, full of coconuts. What you will find is a lush collection of winding streets and cozy bungalows, and a commercial district filled with some of the best restaurants in the city. What was once a nightlife hub has transformed into an outdoor dining destination, where you’ll find everything from farm-fresh burgers at Lokal, to fine dining in a park at Glass and Vine, to the best truffle fries you’ll ever have at Taurus Beer and Whiskey. Though bars here aren’t what they once were, you can still drink with locals at Barracuda or Tavern in the Grove, or enjoy cocktails by the water at Monty’s. 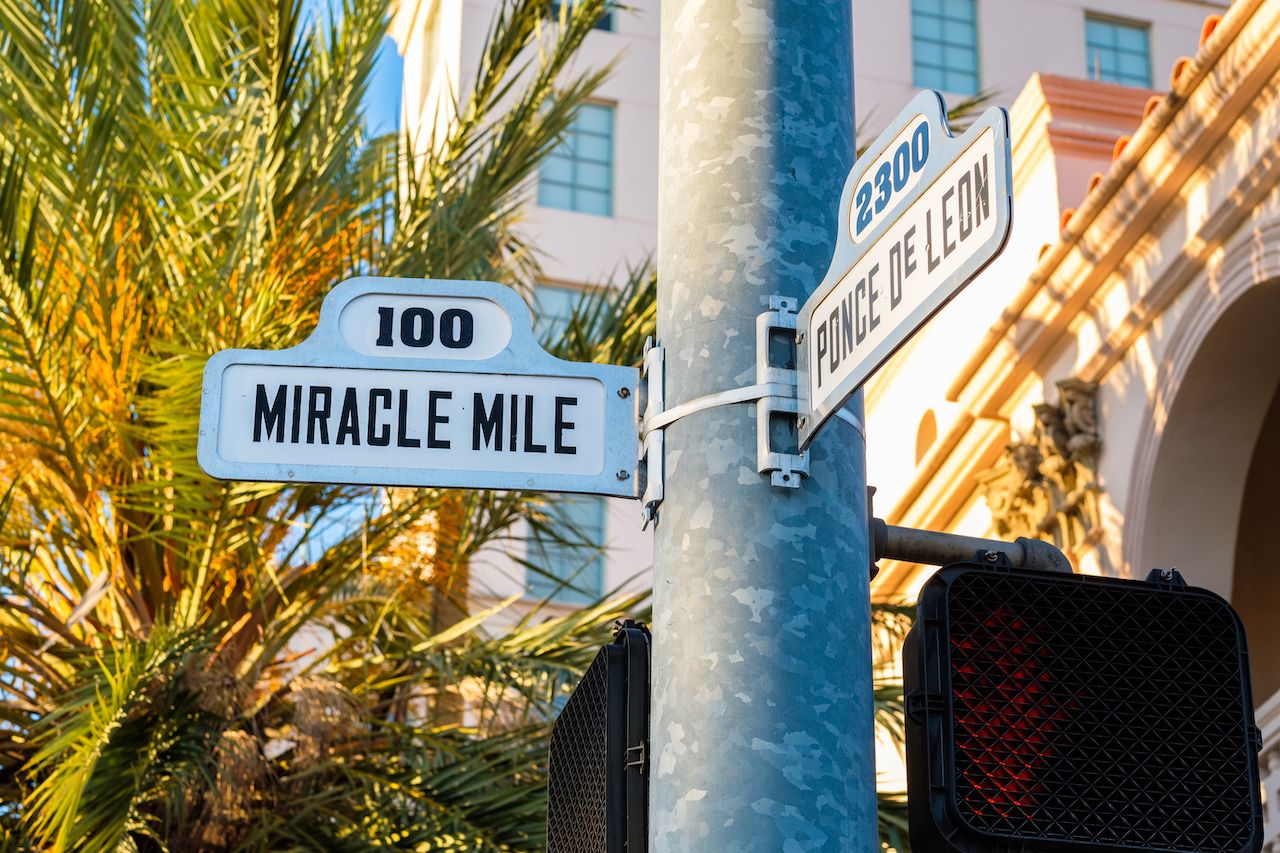 Coral Gables — Don’t you dare call Coral Gables a suburb. The City Beautiful — as it calls itself — is an upscale town of 52,000 complete with Miracle Mile, a pedestrian-friendly downtown drag that’s also a wedding dress destination for the entire state. The first fully-planned community in America features grand homes with stunning Mediterranean revival architecture set on banyan canopy cover. It’s also the best part of Miami to head for shopping, as the Metrorail drops you right at Merrick Park, where names like Gucci, Jimmy Choo, and Tommy Bahama (it’s still Florida, after all) fill a big, outdoor plaza. It’s also home to the University of Miami, a tropical country club masquerading as an accredited university. 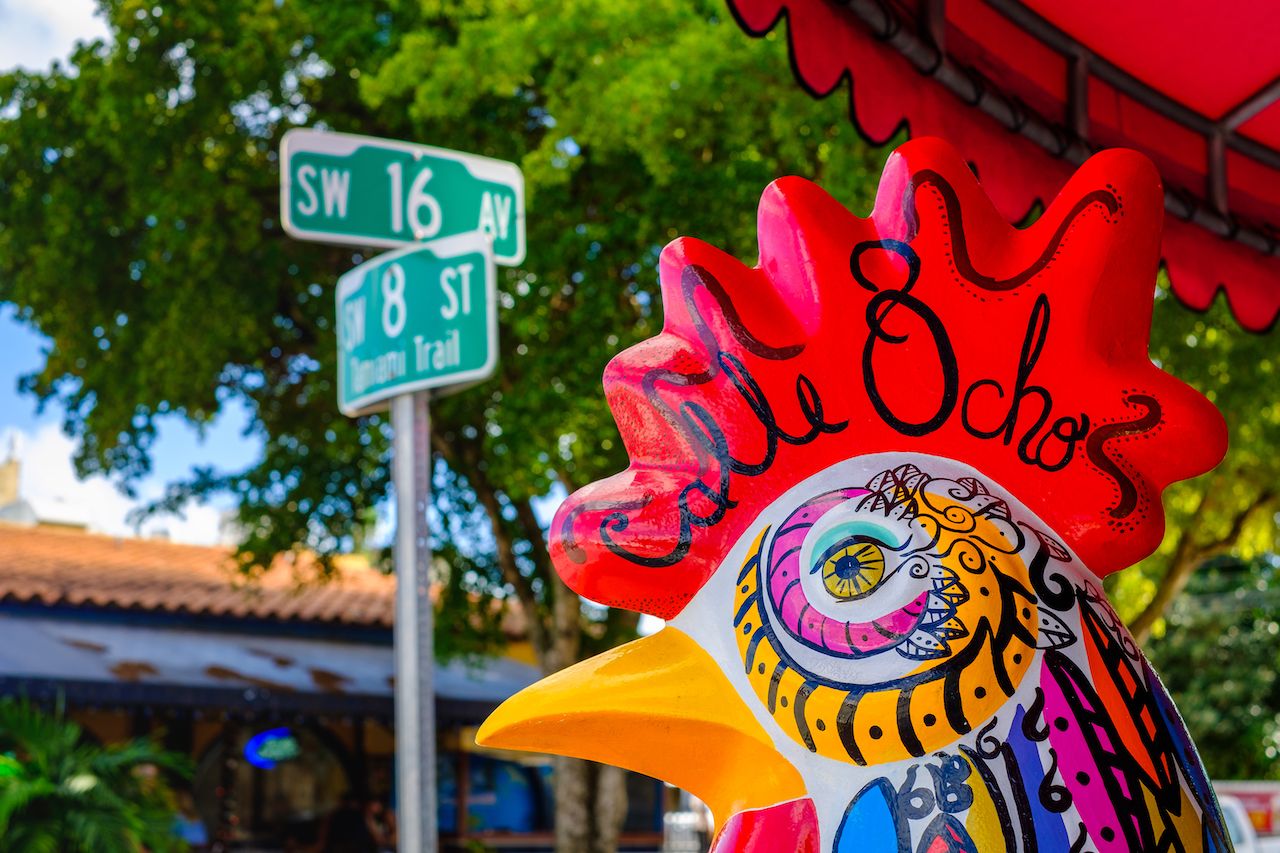 Little Havana — The name here is a little misleading, as you won’t find many Cuban people living in Little Havana any longer. But don’t let that stop you from strolling down Calle Ocho with a freshly-rolled cigar in your hand, picking up a Panama hat and a guayabera from the nearest store, and acting like you’re Ernest Hemingway circa 1935. Ball and Chain, the one-time jazz club restored to its former glory and now home to live music under a pineapple bandshell, is ground zero for authentically-Cuban fun. You’ll also want to drop in on Maximo Gomez Park to peep at the abuelitos playing dominoes, then head to the nearest ventanilla for a shot of Cuban coffee. For an authentic Miami hamburger, grab a frita at El Rey de Las Fritas, or for a larger selection of Cuban food head a little west to Versailles. It’s the de facto clubhouse for the aging Cuban exile community, and will immerse you in Miami’s Cuban culture faster than any restaurant in town. 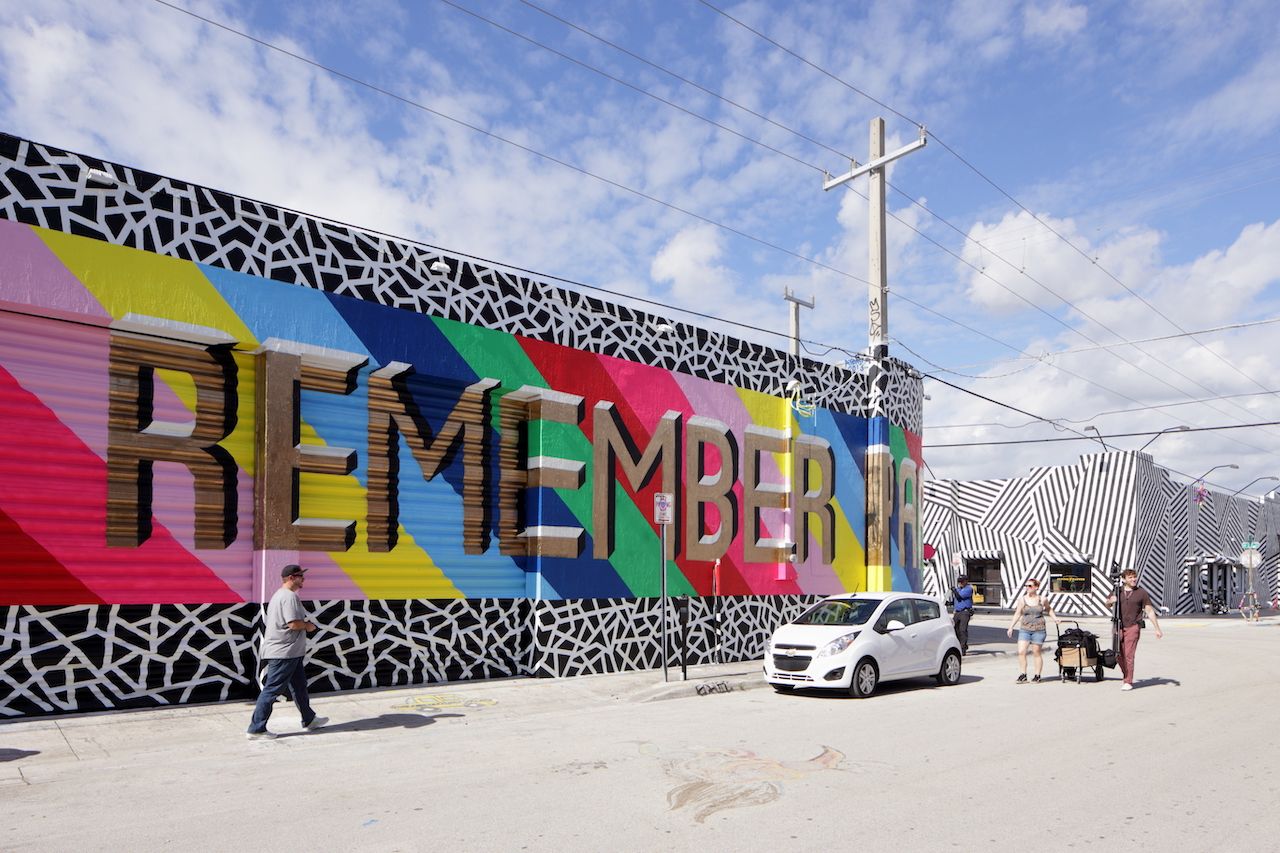 Wynwood — Remember when guys who painted on walls were called “vandals” and “hoodlums,” and were generally the kids your parents told you to stay away from? Well, now we call them “street artists” and no neighborhood in the world has a larger, denser concentration of their creations than Wynwood. This former industrial wasteland has been transformed over the last decade into America’s premier outdoor museum, where colorful, provocative murals fill tons of city blocks. Though high rents have forced out many of the art galleries, they have been replaced by some of Miami’s best restaurants, like Brad Kilgore’s inventive Alter and the authentically-Italian Sette Osteria. It’s also home to three local breweries: Concrete Beach, Wynwood Brewing, and J Wakefield, all easily walkable on a pleasant Florida afternoon. 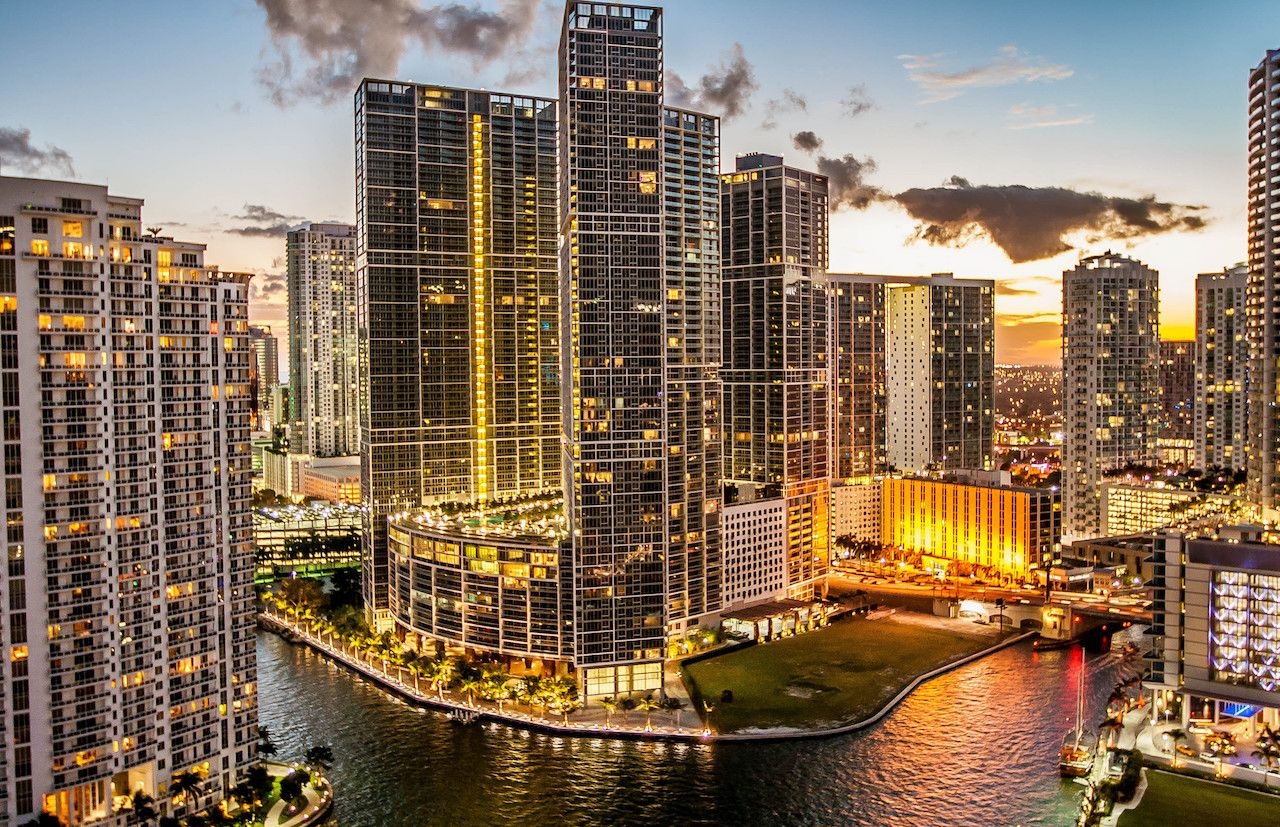 Brickell — Once upon a time, the Miami skyline consisted of a handful of tall buildings, with one that lit up three different colors. Now it’s the third-largest skyline in America, thanks mostly to the condos that shot up in Brickell. This canyon of blue glass and white steel is Miami’s financial district, and has become the address of choice for Miami’s young professionals. You can find them having happy hour on the water at the upscale Cantina la Veinte, watching sports and drinking craft cocktails on tap at Batch, or enjoying fine waterfront Peruvian food at La Mar. But Brickell’s absolutely must-see bar is Sugar, East Hotel’s rooftop bar where you can see all the way from Miami Beach to the Everglades. This Asian garden in the sky features Miami-themed cocktails and savory fusion cuisine, and is the perfect place to catch the sunset. 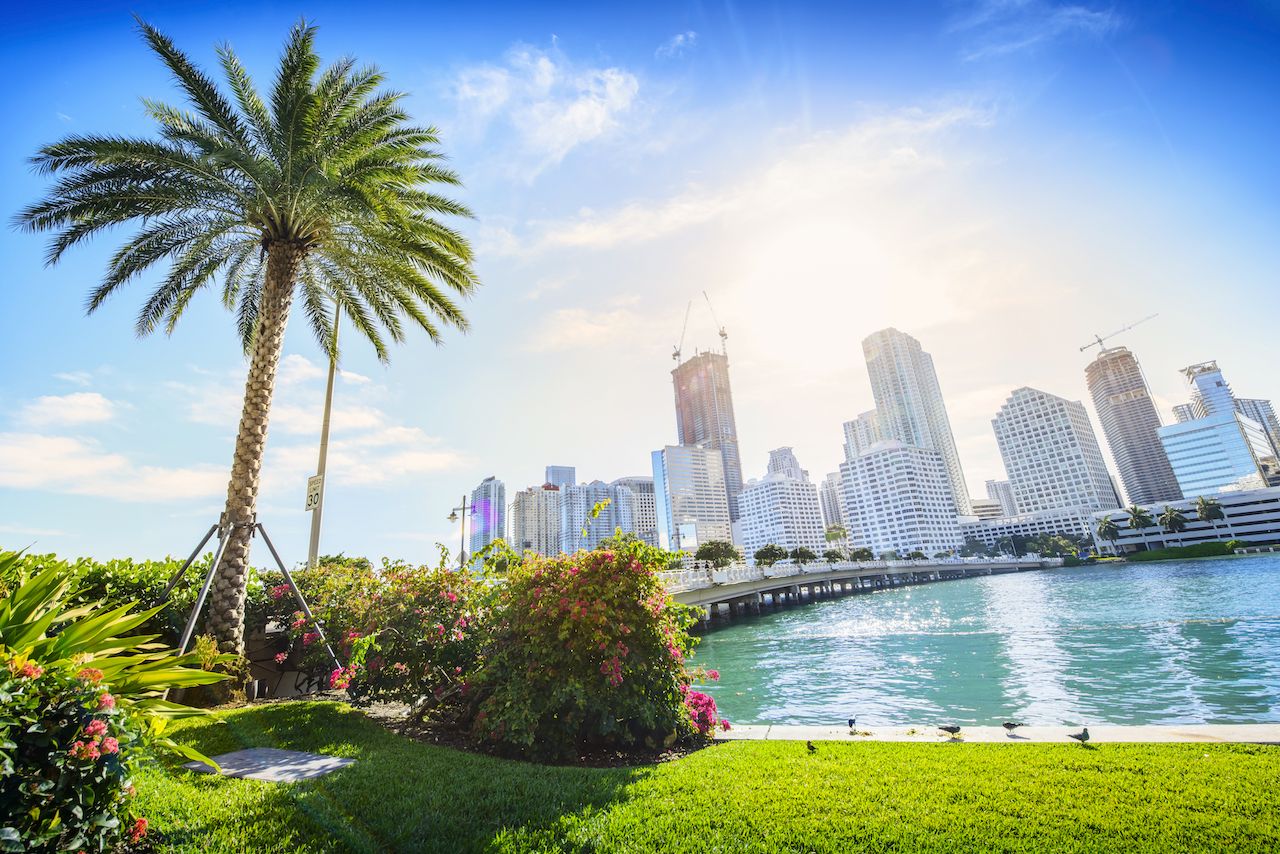 Downtown — Just across the Miami River from Brickell is downtown Miami, which, while not the dead zone it was 20 years ago, is still a little lacking for things to do after hours. But during the day, it’s worth jumping on the Metromover and rolling among the skyscrapers. Stop at the new-ish Pérez Art Museum with one of the best museum views in the world, and the chic Frost Museum of Science with its Instagram-friendly aquarium. Then get a close up look at the “Dancing Lady” on the side of the InterContinental Hotel as you stand by the water at Bayfront Park. Downtown is also home to the American Airlines Arena, if you’re in town for a Heat game. And this year brought downtown its sleek Miami Central Station, the ultra-modern transportation hub and food hall where you can jump on the Brightline train and be in Fort Lauderdale in under 25 minutes. 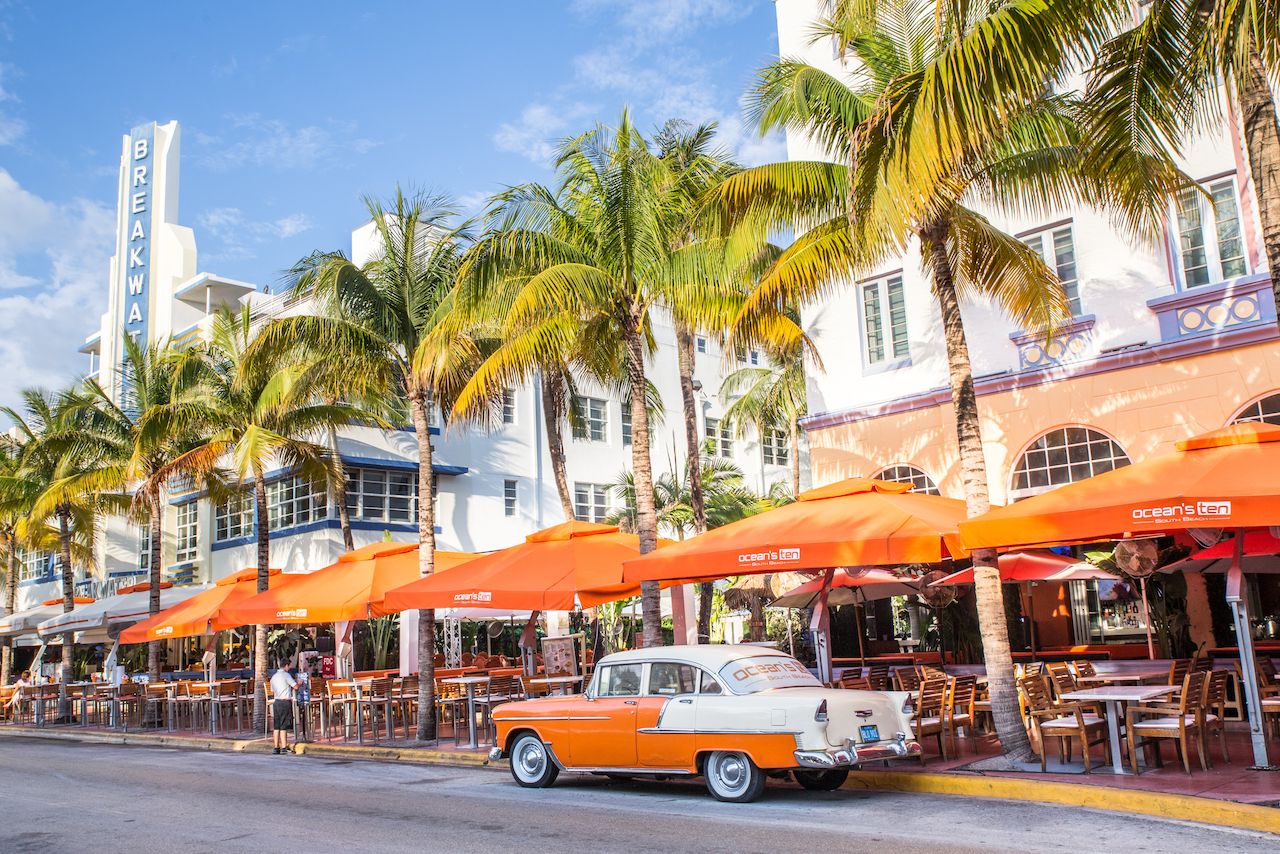 South Beach — LeBron James did the world no favors when he declared “I’m taking my talents to South Beach.” Because the Heat play nowhere near South Beach, which caused many to assume the art deco, neon lights, and rollerblading, unnaturally-jacked dudes were all Miami had to offer. So just so we’re clear: Miami and Miami Beach are two different cities. And South Beach is a neighborhood within Miami Beach.

That said, South Beach is the Miami of your fantasies, so take a stroll up Ocean Drive and maybe even stop into Sugar Factory for a smoking, fruity cocktail before visiting the front of the fabled Versace Mansion. It’s home to Lummus Park, where you can work on the pull-up bars and volleyball courts before spending the rest of the day on the sand. Or hit up the pedestrian mall at Lincoln Road, which on weekends is home to the largest farmers market in the city. 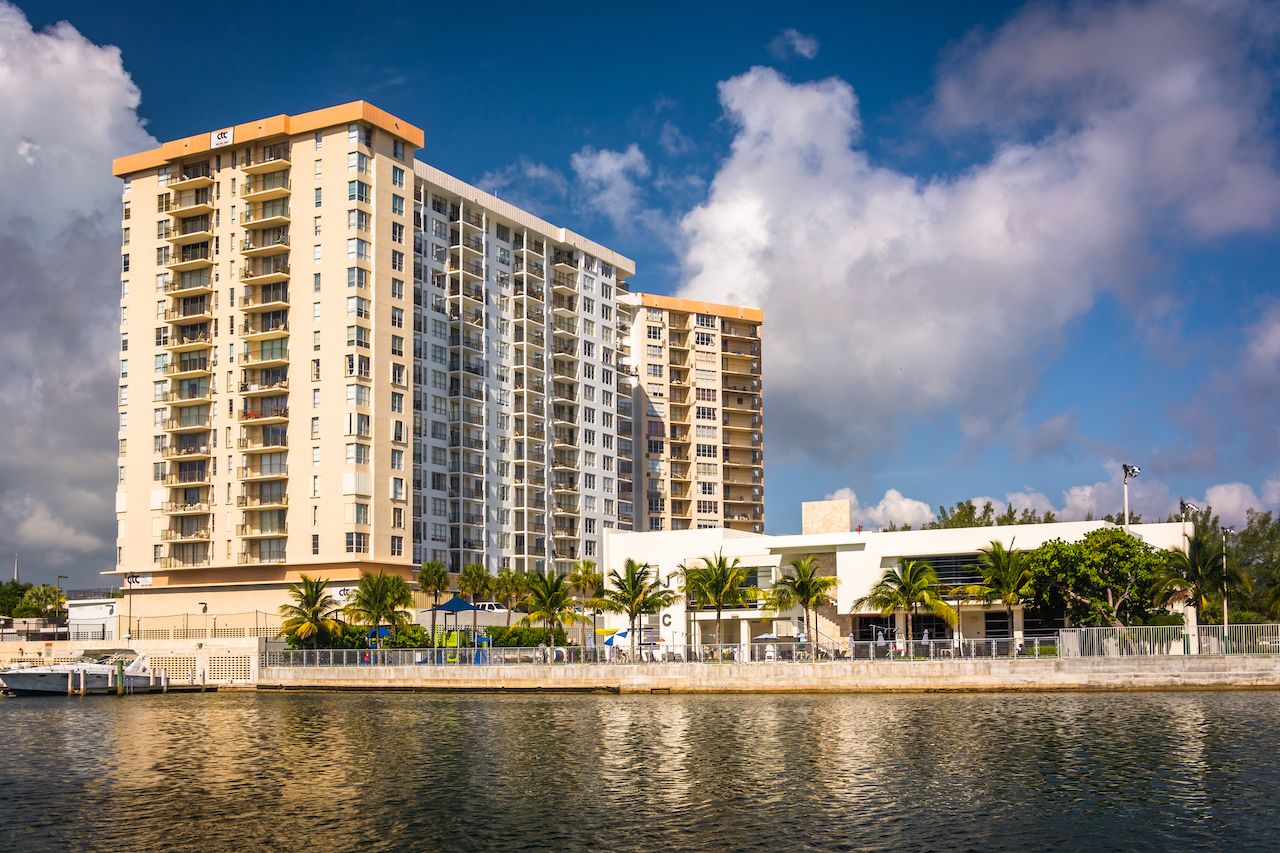 Mid-Beach — North of Miami Beach’s Collins Canal you’ll get to what one might call the “cool” section of Miami Beach. This is the area where most of the new hotels and large-scale projects are opening, like the gorgeous Faena, or the newly-restored EDITION Hotel, complete with a basement bowling alley and ice skating rink. This is also the part of Miami Beach where nightclub LIV lives, in the lobby of the famed Fontainebleau Hotel, as well as the Nobu Hotel and the Confidante — home to Richard Hales’ Bird and Bone restaurant. The Generator Hostel opened its first American outpost here this year, complementing the Freehand, which has the best cocktail bar in Miami at Broken Shaker. You’ll also find fantastic poolside drinking at the 1 Hotel’s rooftop pool, with views out over the Atlantic Ocean in one direction and the Miami skyline in the other. 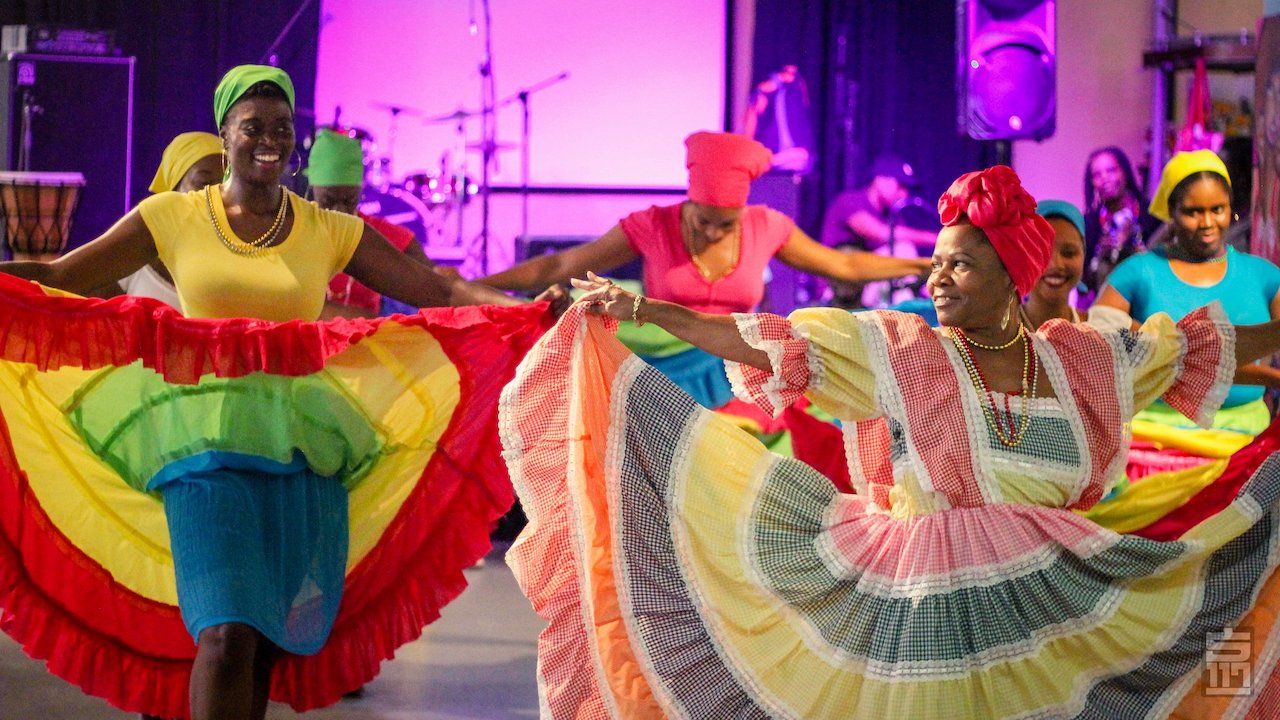 Little Haiti — Though many say it’s next on Miami’s gentrification hitlist, Little Haiti still radiates with island culture, from the shops and bodegas along NE Second Avenue to the art on the walls at the Little Haiti Cultural Center. It’s worth driving through the neighborhood then making a stop at the center to learn about this often-overlooked corner of Miami culture. 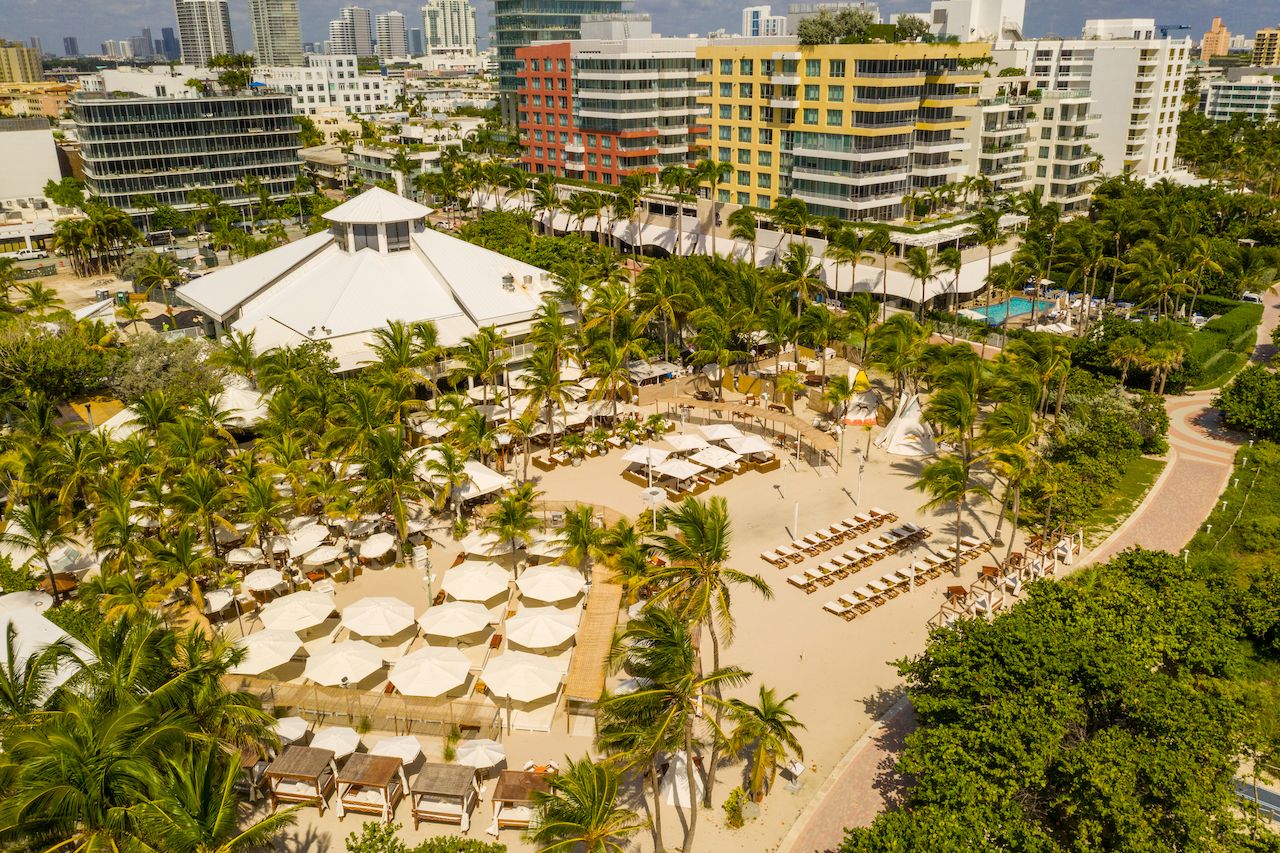 South of Fifth (SoFi) — When the mad hustle of South Beach gets exhausting, head south of Fifth Street and you’ll find a calming, walkable residential neighborhood where, even in the height of tourist season, the beaches are never too packed. Here, you can enjoy a calming Sunday day party at Nikki Beach before heading to the sand near the jetty, to watch floating skyscrapers as cruise ships sail out of Government Cut. Then head to a hilltop (man-made, obviously) at South Pointe Park and take in a sunset over the Miami skyline in one direction, and the golden hour hues of the Atlantic Ocean in the other. SoFi is also home to the highest concentration of fantastic restaurants in Miami, whether it’s the legendary Joe’s Stone Crab, the beachside Greek abundance at Santorini by Georgios, or the hearty steaks at Prime 112 and Red the Steakhouse. 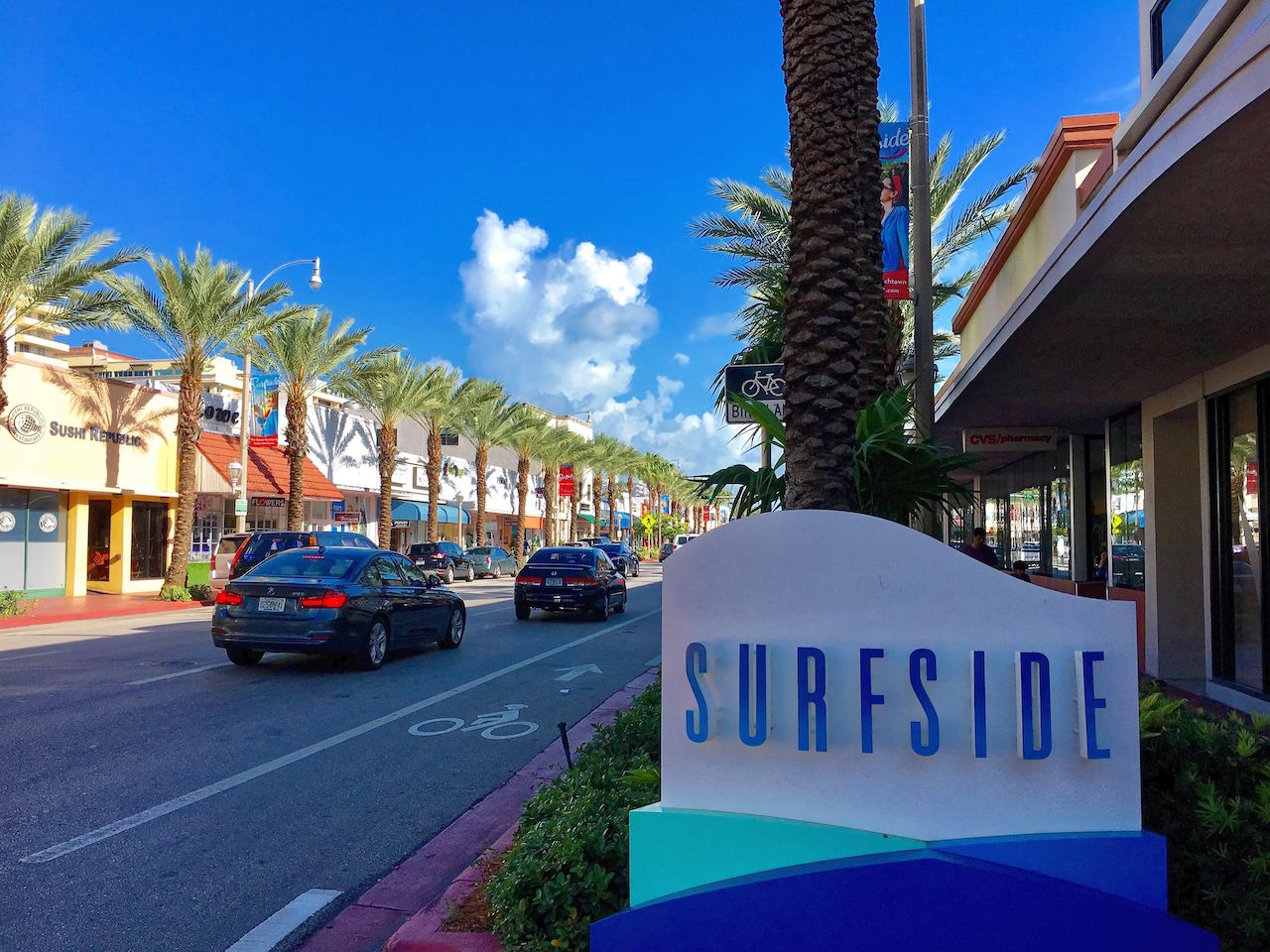 Surfside — Just north of Miami Beach you’ll find the charming and quiet seaside town of Surfside. Here, you can stroll the main streets along Collins and Harding avenues, enjoying a gourmet ice cream cone from Serendipity Creamery before heading down to the city’s paved boardwalk. This sleepy oceanside hamlet has grown up a lot in the last few years, opening the luxurious Surf Club Four Seasons, complete with Thomas Keller’s newest restaurant on the ground floor. It also welcomed the Grand Beach Hotel with its rooftop bar and sprawling sunset views of the city to the west. Surfside is also home to a large Orthodox Jewish population, leaving the city teeming with great kosher food, plus classic deli sandwiches at Josh’s Deli. 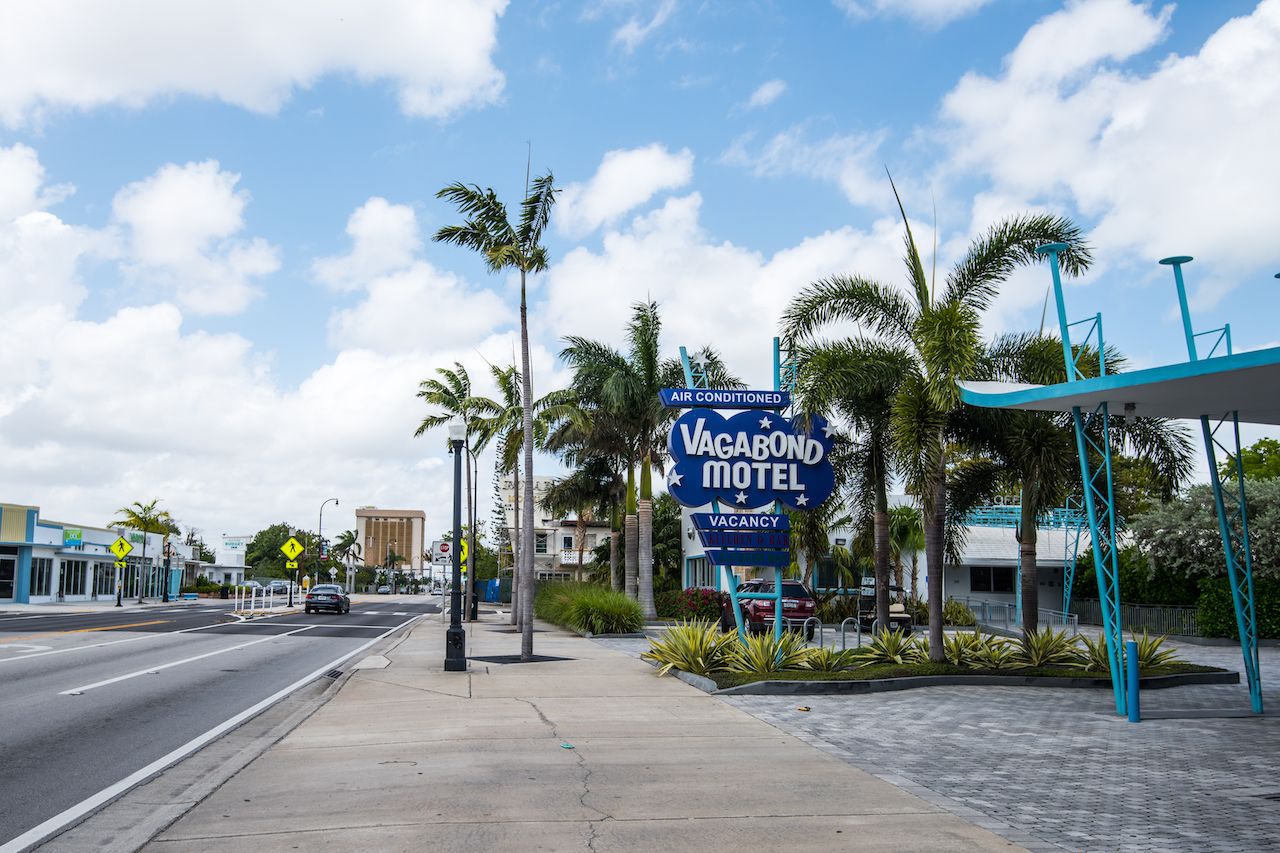 MiMo — The name of this stretch of Biscayne Boulevard north of 55th Street refers to the Miami modernist architecture style, prevalent in the neon-lit motels that line the neighborhood. Up until 10 years ago, it was the kind of place NFL players got caught doing bad things before the Super Bowl, and today it’s a colorful corridor of cool spots, full of creative local restaurants and bars.

Because the rents aren’t crippling, some of the best chefs in the city choose to set up shop in MiMo, like Danny Serfer’s comfort food at Blue Collar and Cesar Zapata’s Cajun-Vietnamese fusion at Phuc Yea. Further up the street, you’ll find a swanky pool scene at the restored Vagabond Hotel, the best grilled cheese sandwiches in the city at Ms. Cheezious, and ‘80s-themed cocktails at The Anderson. Though the neighborhood has cleaned up, it’s still got a rough edge to it — you’ll still find the litany of restaurants peppered with liquor stores, pot doctors, and payday loan joints. But if you’re looking for a slice of old Miami grit with its new culinary pedigree, MiMo is the best place to do it.