People in the rest of Florida will be quick to tell you Miami is nothing like the rest of the state. This can be a good or bad thing, depending on how you look at it, but to really get a feel for all the weird, wonderful, bizarre, and often beautiful things the state has to offer, it’s worth taking a day out of your trip to get out and explore. While the theme parks of Orlando can’t really be done in a day, there’s plenty of stuff within a couple hours’ drive of Miami to make for an exciting change of pace. Here are some ideas for quick day trips you can take from Miami. 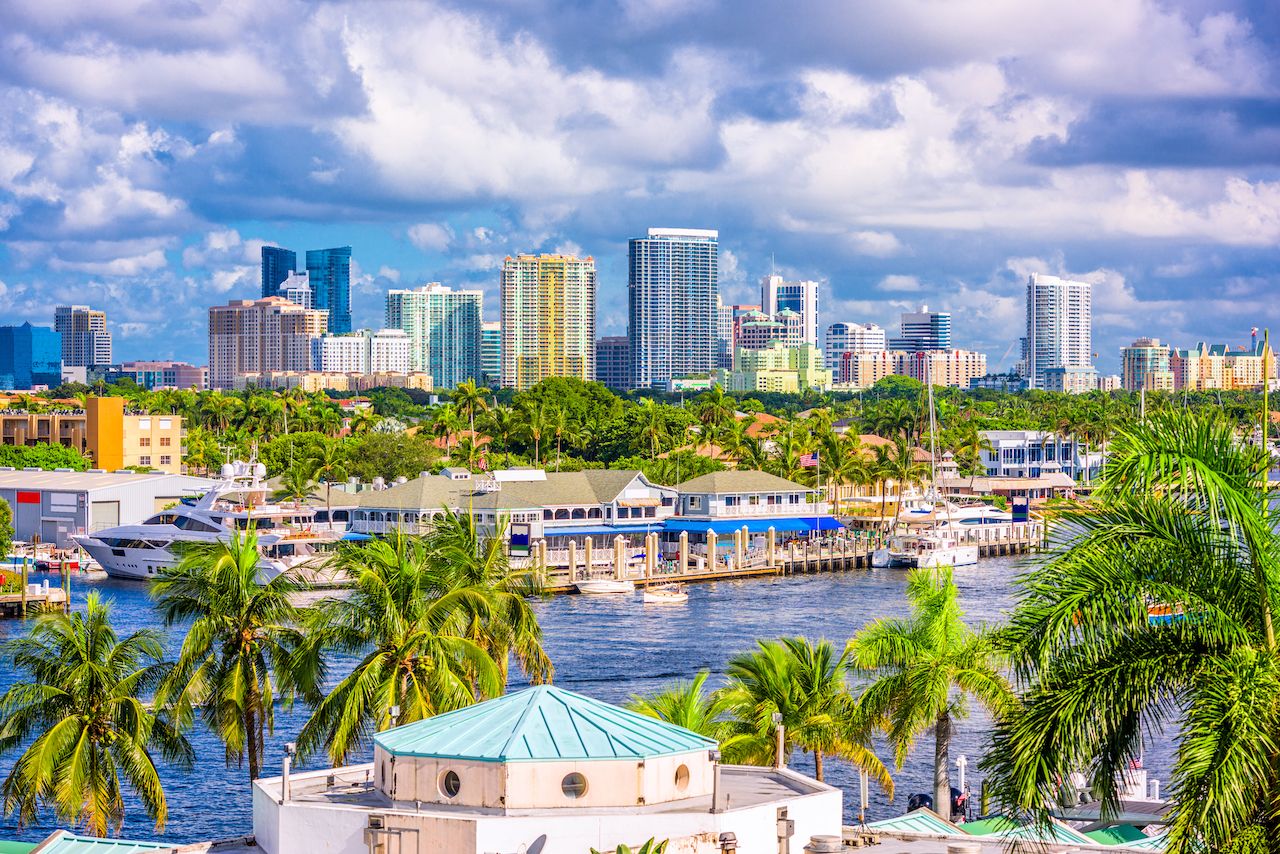 Fort Lauderdale — For years the second-largest city in South Florida has fought to shed its “Fort Liquordale” reputation as the place spring break went to die. And while hopping through the bars along Fort Lauderdale Beach is still as good a way to kill a Sunday as any, the city itself has morphed into a lot more. The sleek, modern Brightline train gets you from downtown Miami to downtown Fort Lauderdale in under half an hour, where you’re walking distance from the Broward Center for Performing Arts, the restaurants of Himmarshee Village, and the historic riverfront. There, you can jump on a water taxi and float by celebrity homes on your way to Lauderdale Beach, or take the Sun Trolley around downtown to Las Olas.

In the evening you can stroll through the artsy FATVillage and see what Wynwood was like 10 years ago, or grab drinks at South Florida’s most creative new cocktail bar at The Wilder. Then be sure to have dinner at Hardy Park Bistro, which seat for seat might be the best restaurant in South Florida. From there, it’s a short train ride home after discovering Broward County is about a lot more than mismanaged elections. 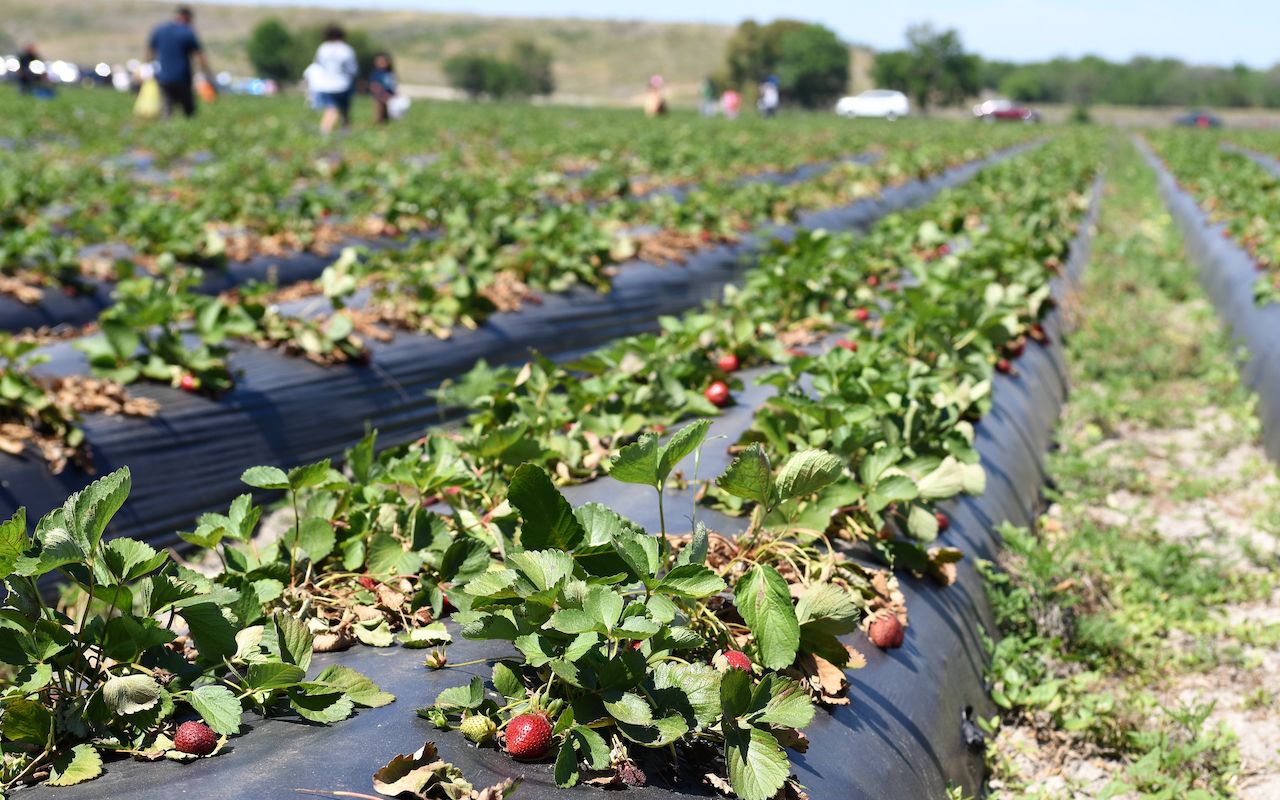 Homestead and the Redlands — Miami is never really thought of as an agro-tourism destination, but spend a day down in Homestead and you’ll swear you were somewhere in America’s heartland — if you ignore the palm trees. Your first stop should be Robert is Here, a spacious produce market known for its milkshakes filled with fresh tropical fruit. It also has a small zoo in the back where, if you’re lucky, you might see a goat riding a turtle. From there, head to Knaus Berry Farm, where Miamians wait in line for hours for the legendary cinnamon rolls. After picking up a couple dozen of them, drive out to Schnebly Redland’s Winery. Though South Florida isn’t exactly ideal for growing grapes, at Schnebly you can try wine made from avocado, mango, and other tropical fruits. Just make sure to keep your mind open. Finally, head across the lush courtyard to Miami Brewing Company, the oldest craft brewery in Dade County. 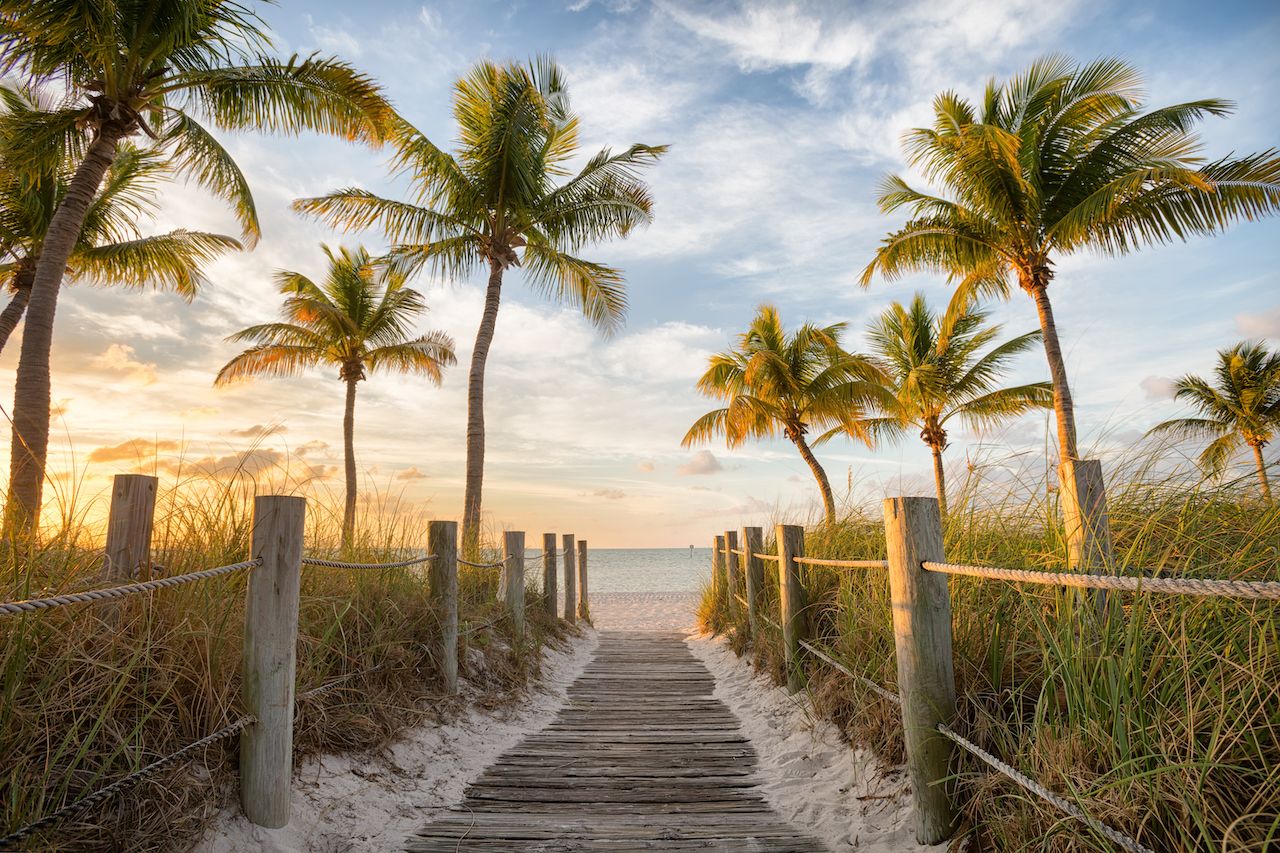 The Florida Keys — Despite the brutal storms of 2017, the Florida Keys are pretty much back to normal, and are some of the most beautifully unique places in the world. A little over an hour from downtown Miami, Key Largo is home to John Pennekamp Coral Reef State Park, one of the best places in America for snorkeling. For divers, Key Largo and the upper Keys are home to beautiful coral reefs, with dive shops literally lining the overseas highway. Take the road a little further and as you cross bridges connecting the little tropical islands, you’ll feel like you’re driving on the ocean. At the end of the highway, you’ll come to Key West. Though we wouldn’t recommend driving to Key West and back in a day, as the drive is three to four hours each way, it’s worth a night there to experience the raucous nightlife of Duval Street and the sunset over Mallory Square. 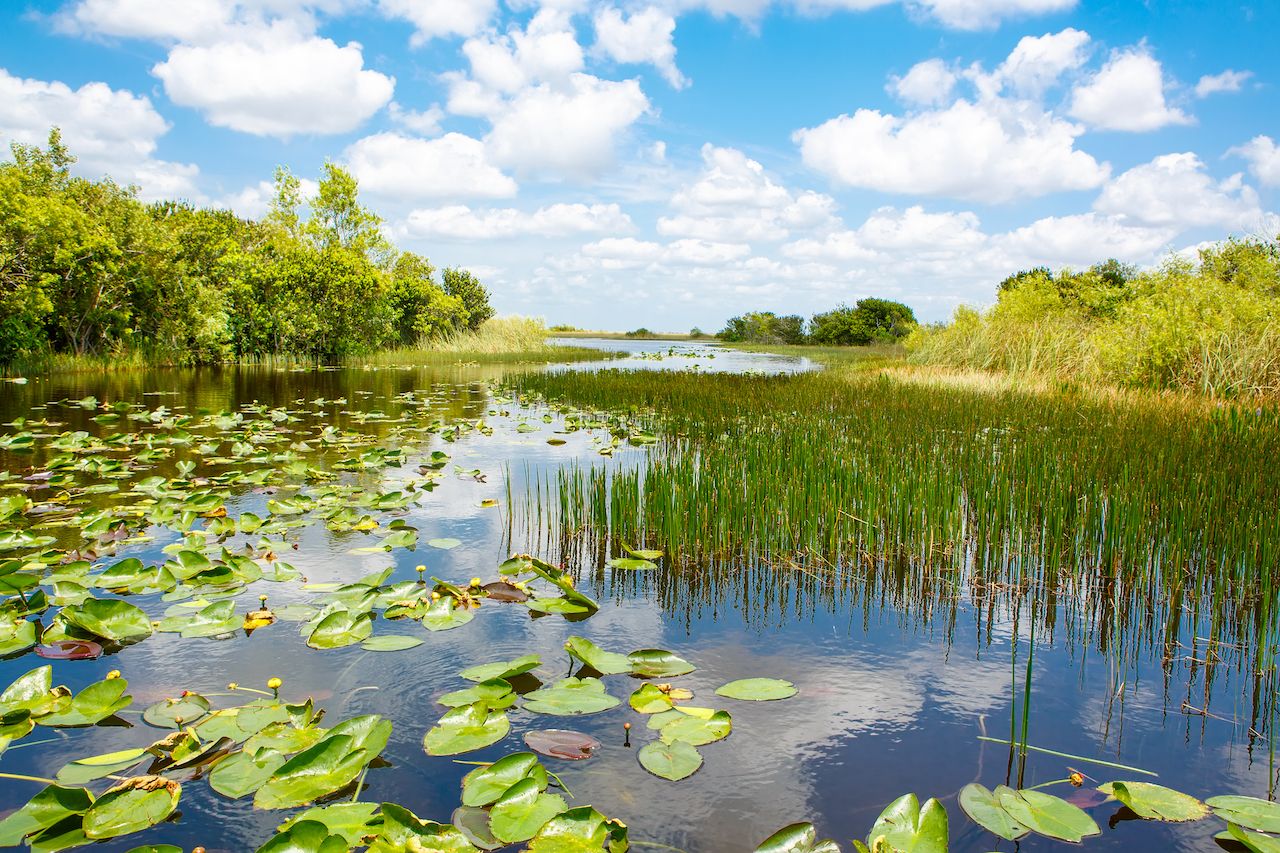 The Everglades — Because Florida lacks what some might consider “elevation,” people don’t always give it enough credit for its natural beauty. But take a drive through Big Cypress National Preserve to see egrets flying under the cypress canopy, and you’ll realize why people fall in love with the Everglades. These wetlands filled with mangroves, sawgrass, and alligators feel like a world away from Miami, even though they’re only a half-hour drive without traffic. Stop at the little Miccosukee villages along the way to watch alligator wrestling shows. Then venture a little further into the swamp to Everglades City. It’s about another 45 minutes down US-41 but well worth it for the airboat rides at Jungle Erv’s, which go through the thickest, deepest part of the Everglades. Then drive a couple minutes into downtown Everglades City for the freshest stone crabs in South Florida. 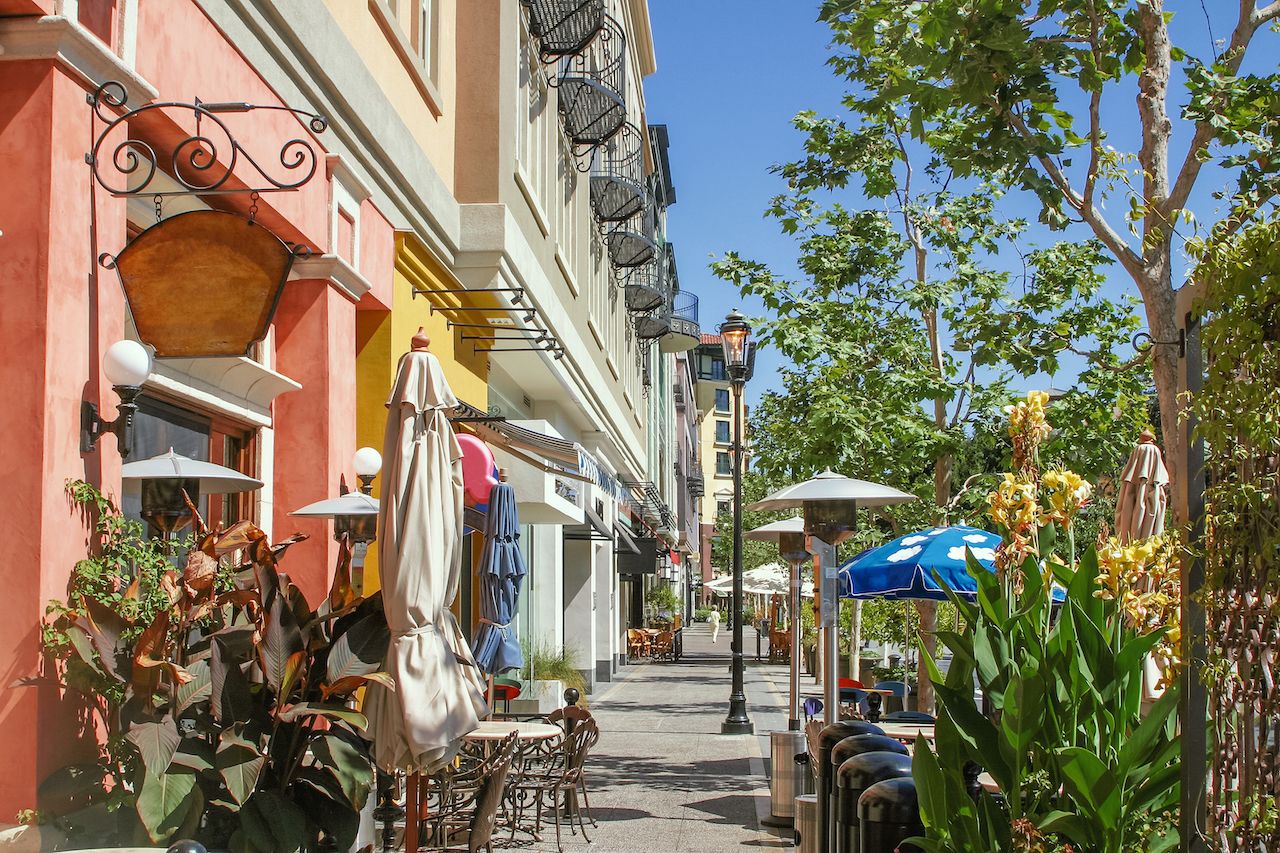 West Palm Beach — An hour on the Brightline train brings you right into the heart of downtown West Palm Beach. From there you can walk to the Culture Lab, an abandoned Macy’s department store now filled with trippy art installations among old display racks and checkout counters. A block or so away you can sample beers at the West Palm Brewery and Wine Vault, or head into the Blind Monk to do the same with some inventive tapas. If you’re looking to get a little exercise, rent a bike and head across the bridge to the island of Palm Beach. Here, you can learn all about the history of South Florida at the Henry Flagler Museum before stopping for drinks at the iconic Breakers resort and its ornate HMF bar. For dinner, be sure to pedal over to Buccan, which many say is the best restaurant in Florida. Or, if you’re not on a Palm Beach budget, head to the Buccan Sandwich Shop around the corner for the same level of food for half the price. 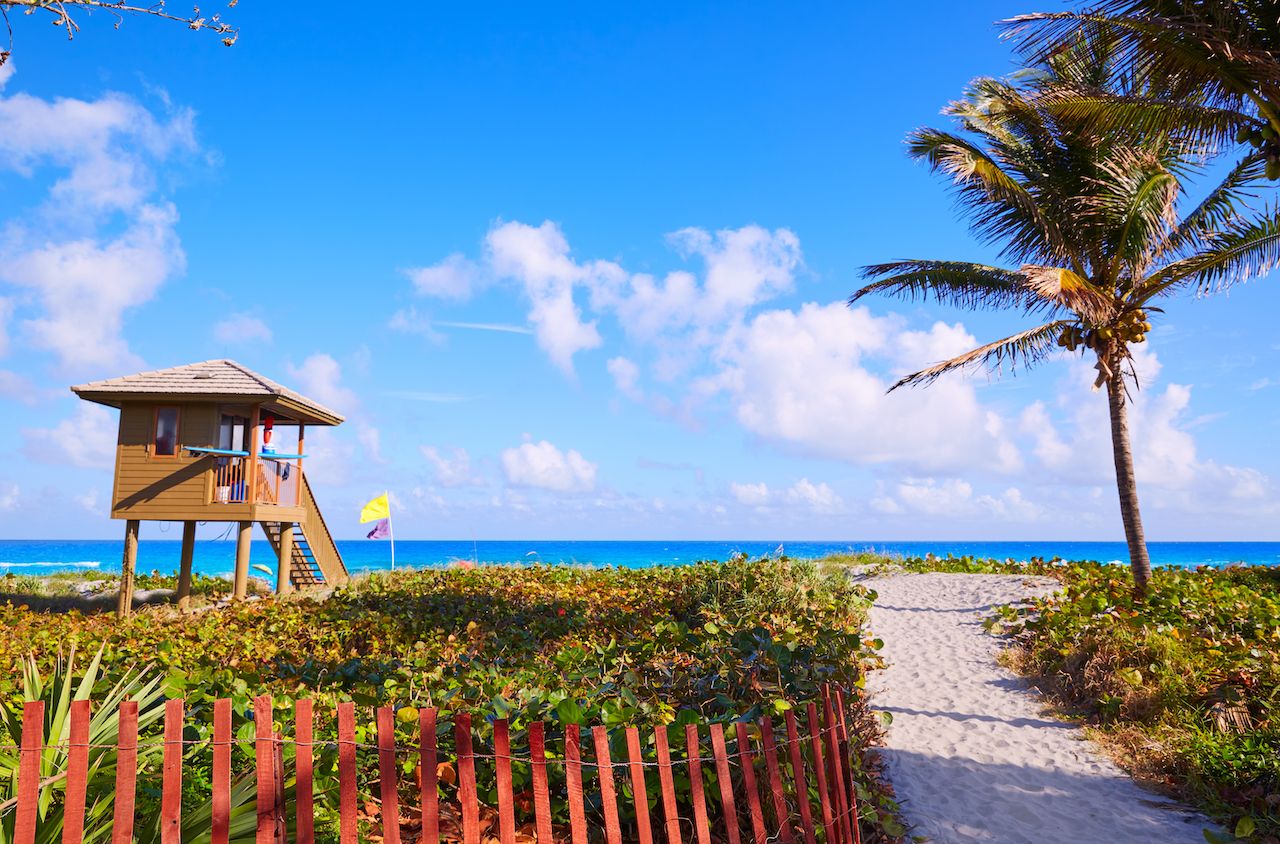 Delray Beach — This one-time grandparent visitation hub has become the small city of choice for many young professionals who tire of Miami’s frenetic pace. This subdued beach town still has big city amenities, with restaurants like Dada and Deck 84 drawing people from Miami for dinner ventures into Palm Beach County. Delray is also home to one of the best beach bars in the state at Boston’s, where, if you can tolerate the transplanted Patriots fans, you’ll find a fantastic sports bar too. The beach here is never crowded and still maintains much of the charm it had before the city next to it grew up. And if you’re in town on St. Patrick’s Day, Delray has the best parade in the state. 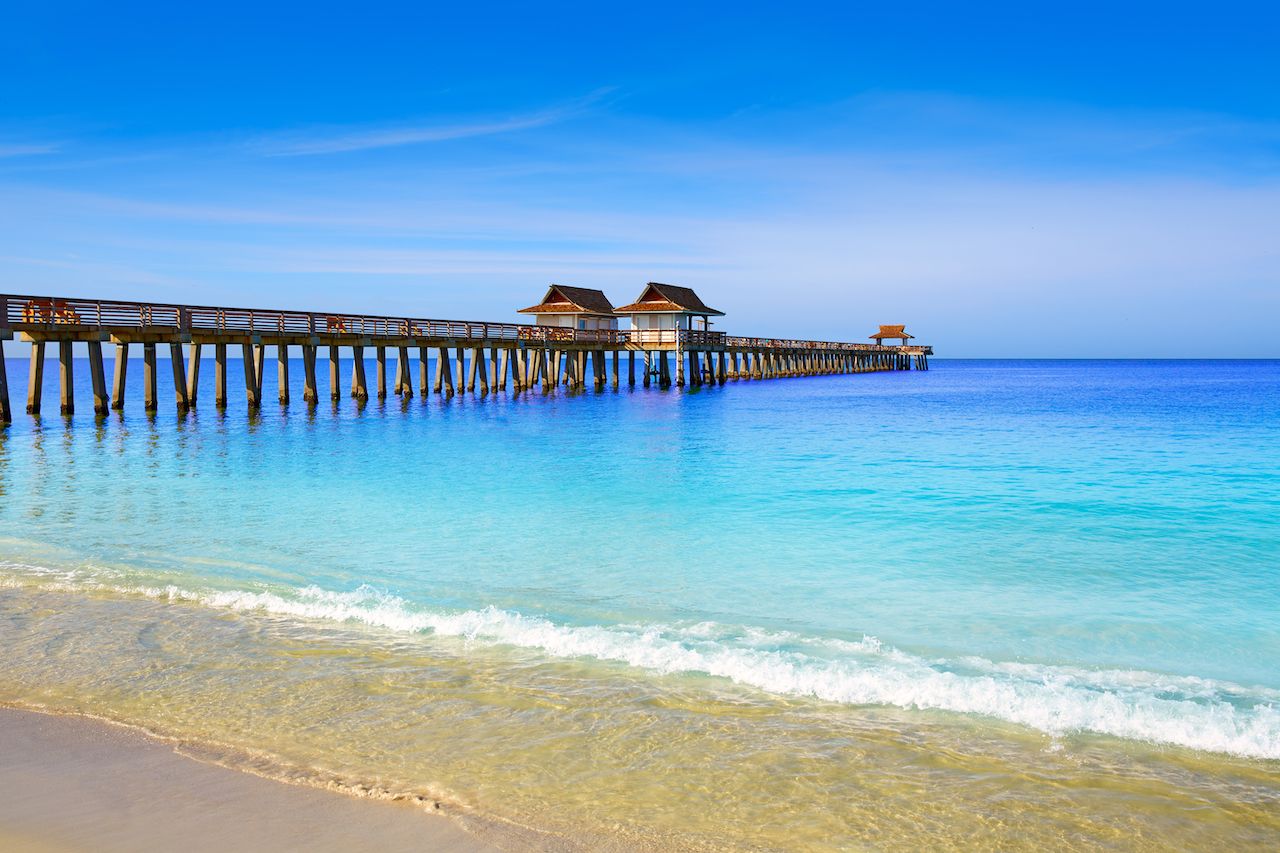 Naples/Marco Island — One of the great Florida adventure days involves waking up to see the sunrise over the Atlantic Ocean, then crossing the state to see it set over the Gulf of Mexico. Since Naples is only a couple hours’ drive across the Everglades, the adventure is pretty easy. If you arrive before sunset, head over to Marco Island for some of the best shelling in the world, then take a jetski ride from the J.W. Marriott over into the Everglades. Afterward, stop for a rum drink on the beach at Kane, which boasts the most impressive rum collection in Florida. Head back to the mainland and park in the downtown area, then stroll a few blocks to the soft sand and turquoise waters of Naples’ public beaches. Grab dinner along Fifth Street, with new American food at Hobnob Kitchen and Bar or refined Italian at Osteria Tulia. And if you don’t feel like driving back after that, the Inn on Fifth is a delightful boutique hotel you won’t even have to drive to. 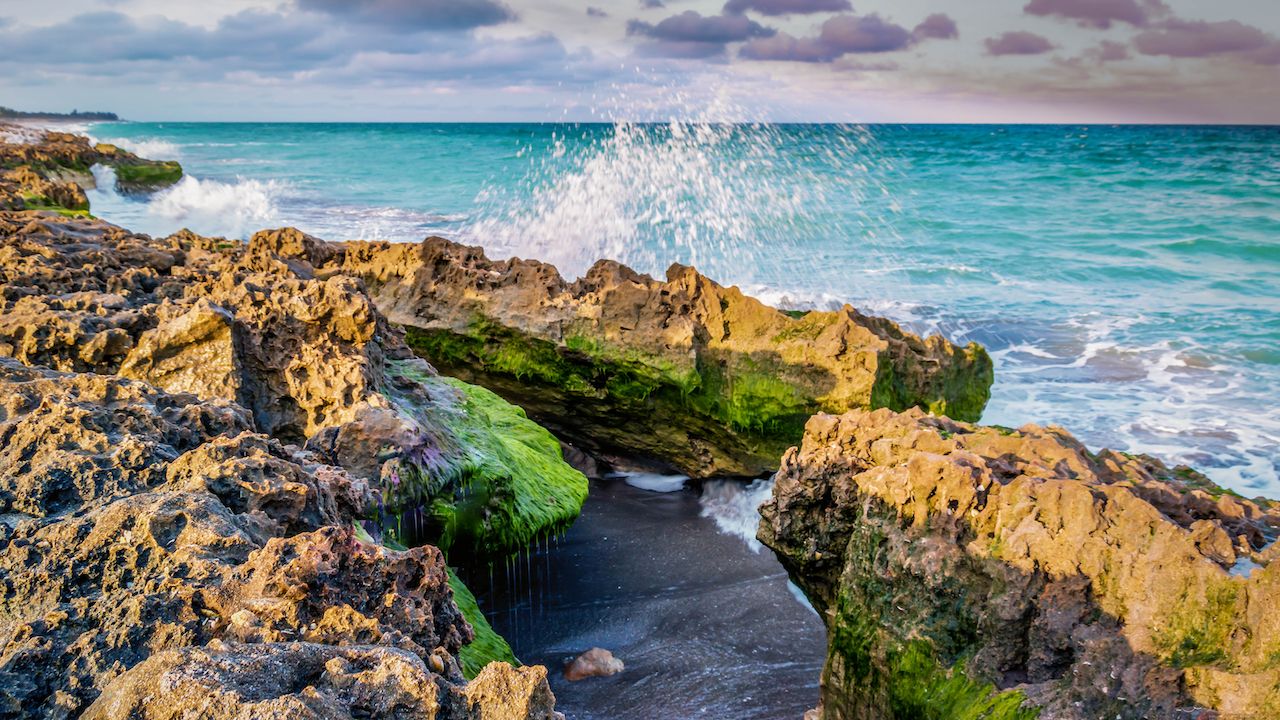 Blowing Rocks Preserve — About 90 minutes north of Miami you’ll find one of the most unique geological features of the area at Blowing Rocks Preserve. Though parking can be difficult, this beach preserve in Hobe Sound is home to a rocky Anastasia limestone shoreline — the Atlantic’s largest — eroded by years of fierce winds off the Atlantic Ocean. Though the wind doesn’t make it the ideal place to go for a hard day of tanning, you will find loggerhead, green, and leatherback sea turtles along the shore. And if you head here during high tide or during a storm, you can see waves crashing into the rocks with water shooting upward of 50 feet into the air. 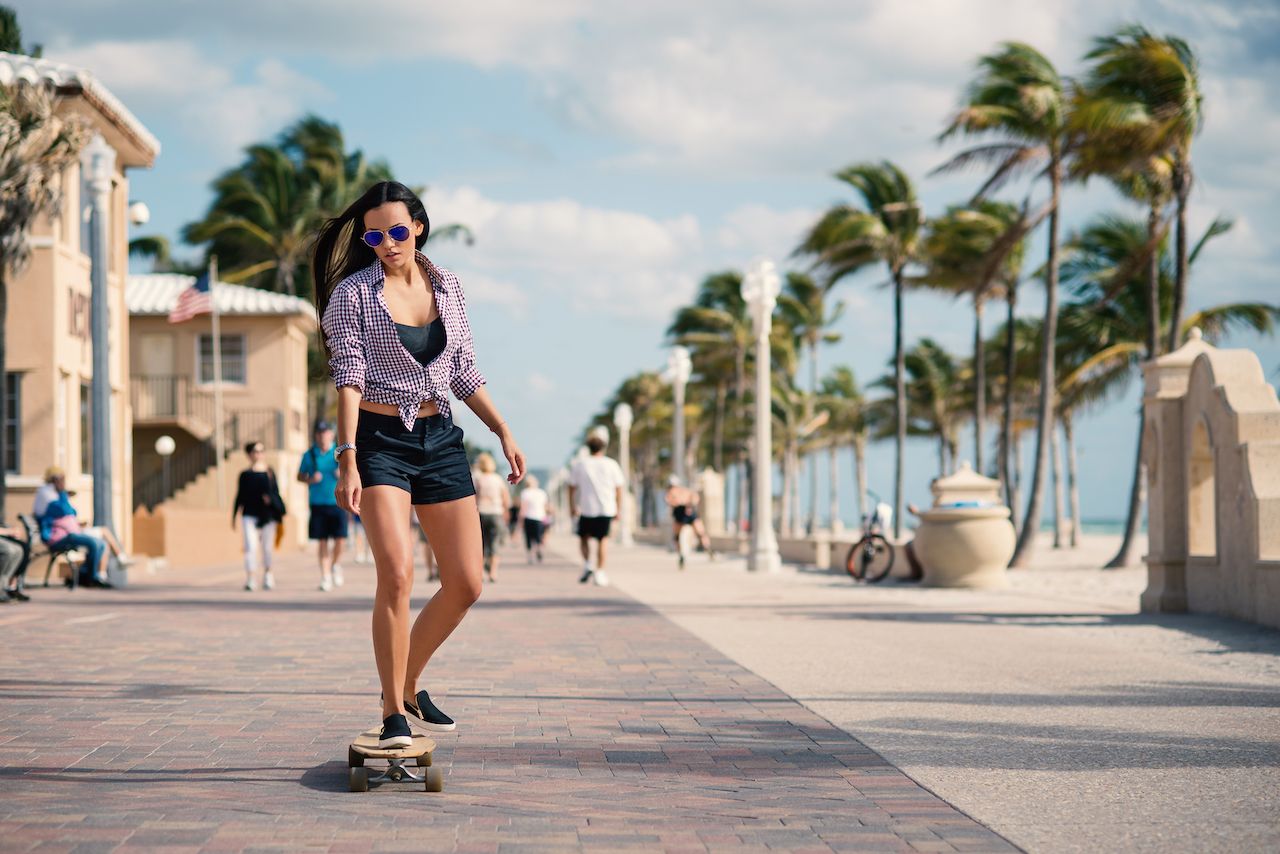 Hollywood Beach — Though South Florida is not lacking in the beach department, we don’t have much in the way of traditional East Coast boardwalks where you can stroll next to the sand, stopping into bars, restaurants, and mini-golf courses. The closest thing we have is Hollywood Beach, a quirky place full of the people you read about in Florida Man stories riding beach cruisers up and down the main drag. You’ll have plenty of seaside bars, but the best food on the boardwalk is at the Taco Spot, a Mexican joint that appears to be a tourist trap but might have the best burritos in Broward County. If you want to go a little more upscale, the Margaritaville Resort has a fantastic steakhouse at JWB Prime Steak and Seafood. Or head to the other side of the island to Le Tub, the waterfront home to old bathroom fixtures and one of the best hamburgers in America. 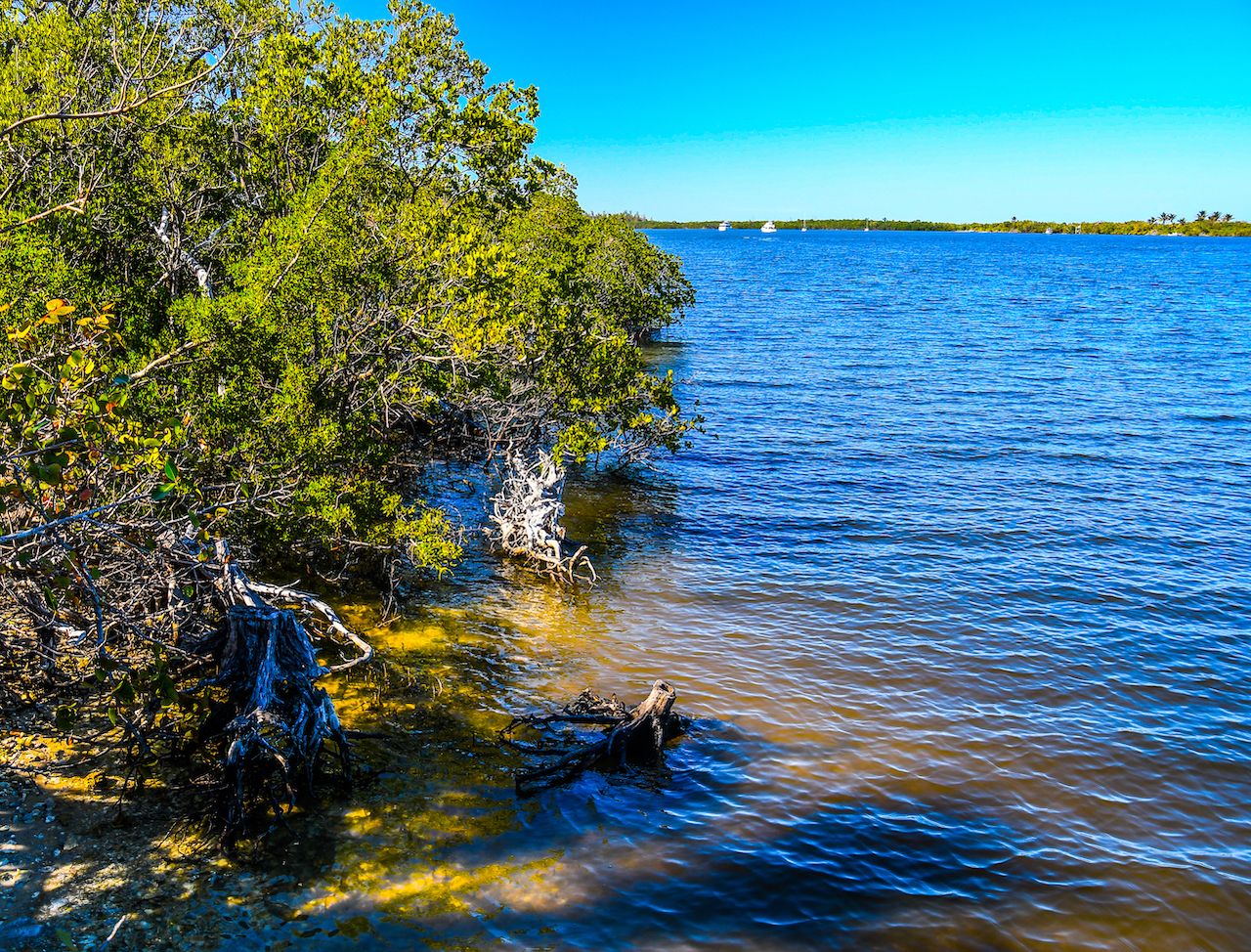 Jonathan Dickinson State Park — People often forget that 100 years ago, South Florida was an inhospitable wasteland of alligators, mangroves, and palmetto shrubs. The best way to see old Florida like an early explorer is by renting a kayak at Jonathan Dickinson State Park in Hobe Sound. Here you’ll traverse the Loxahatchee River, ducking under mangrove canopies and paddling by alligators sunning on the shoreline. They won’t bother you as long as you don’t bother them. Gliding through the black water of the swamp, you’re transported back to another century — and it’s the best way to truly get a feel for what this land was before it became America’s vacation land.

Despite the brutal storms of 2017, the Florida Keys are pretty much back to normal, and are some of the most beautifully unique places in the world. A little over an hour from downtown Miami, Key Largo is home to John Pennekamp Coral Reef State Park, one of the best places in America for snorkeling. For divers, Key Largo and the upper Keys are home to beautiful coral reefs, with dive shops literally lining the overseas highway. Take the road a little further and as you cross bridges connecting the little tropical islands, you’ll feel like you’re driving on the ocean. At the end of the highway, you’ll come to Key West. Though we wouldn’t recommend driving to Key West and back in a day, as the drive is three to four hours each way, it’s worth a night there to experience the raucous nightlife of Duval Street and the sunset over Mallory Square.