Miami does a lot of things well. Nightlife. Plastic surgery. Cafecitos. Parks? Not so much. Where many cities have broad swaths of urban green space, Miami is more like, “We’ve got beaches you can go to in January. What’s ‘green space?’” But while we don’t have big parks for public recreation, we do have a number of spectacular beaches, riverfront parks, and plenty of lesser-known places to escape hordes of sunbathers. Plus, two national parks within an hour’s drive. So whether you’re looking for a place to relax by the ocean, scuba dive, or even jump on a mountain bike, Miami has a park where you can do it. Here’s a quick guide to all the ones worth visiting. 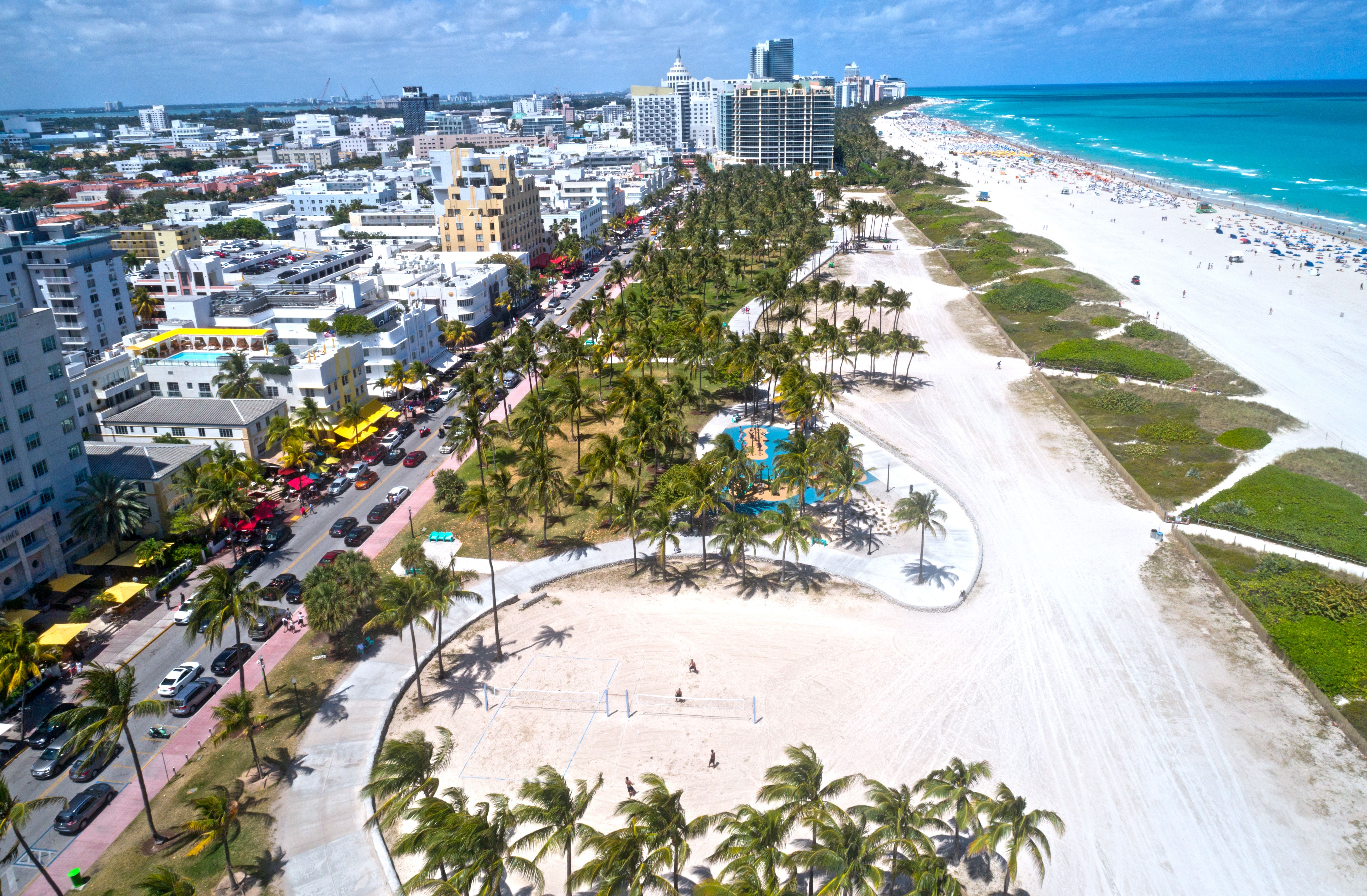 Lummus Park/South Beach — Probably the most recognizable stretch of sand in Miami sits between Fifth and 12th Street in South Beach. Here’s where you’ll find most of the rollerbladers, volleyball courts, workout equipment, and Art Deco facades you’ve seen on TV. Lummus Park, around 11th Street, is the activity center of the beach where pull-up bars and other exercise equipment are filled with people working on their South Beach bodies. The sand here can get pretty packed, especially on weekends — so if you’re seeking a relaxing place to lay on the beach, look elsewhere. 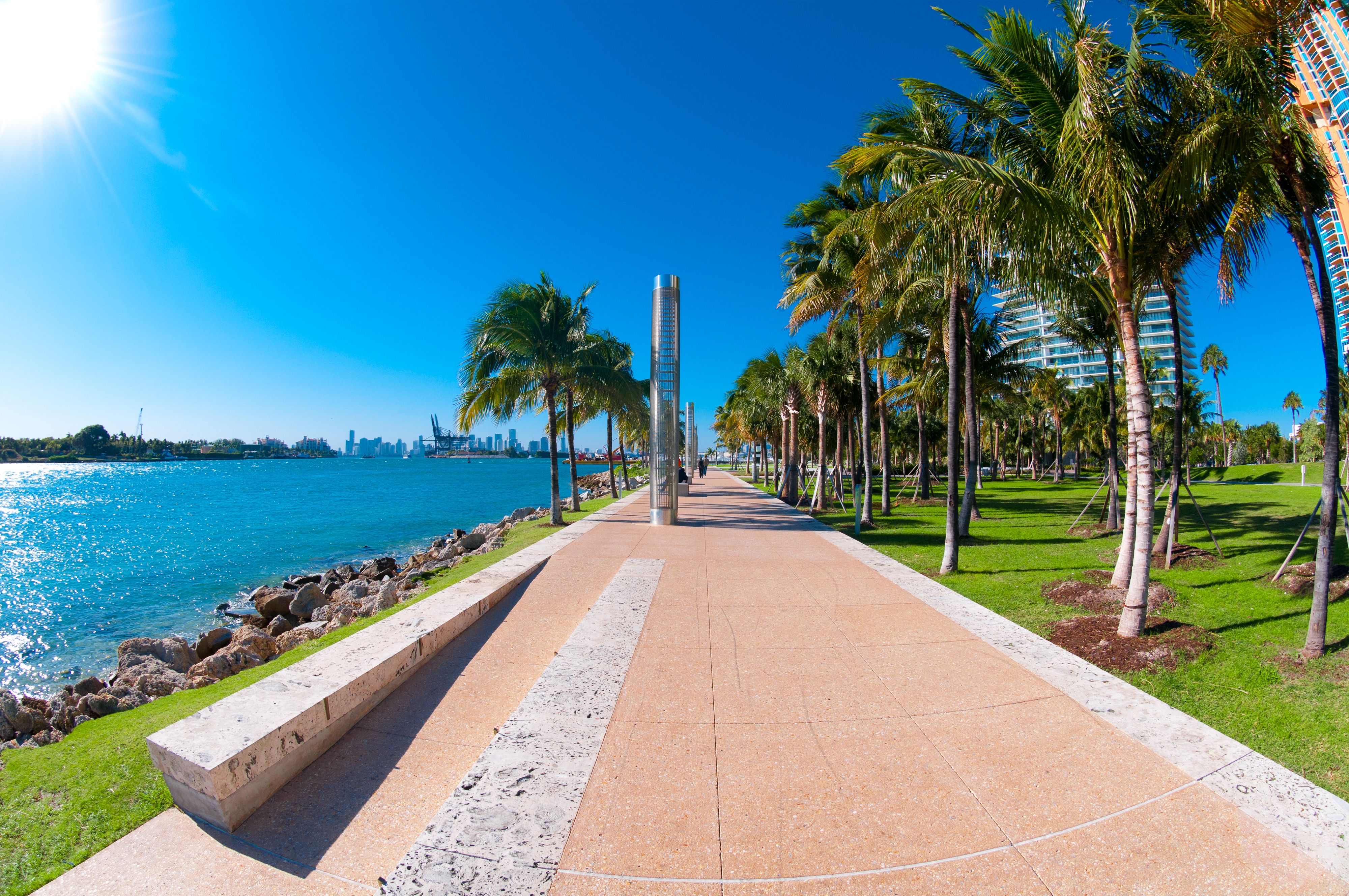 South Pointe Park/SoFi — South Pointe Park sits on the southern tip of Miami Beach. Though popular with locals, it remains one of the great hidden gems of the city. Here you can climb to the top of a grassy knoll and look out across a panorama of the Atlantic Ocean, Fisher Island, and the Miami skyline. The broad path along the water leads to the quietest section of South Beach, as fewer tourists venture south of Fifth Street. The park is also home to Smith and Wollensky, a storied steakhouse with a bar right on the water and some of the best beef in the city.

Haulover Park — North of Bal Harbour around 108th Street you’ll find an undeveloped strip of beach marked by signs for Haulover Park. It’s also marked by signs saying, “Beyond this point you may encounter nude sunbathers.” And if you park your car on the west side of A1A and venture through the tunnel across the street, you’ll come up in the middle of Miami’s biggest nude beach. Much like any nude beach, the crowd isn’t always full of people you’d want to see naked. But it is a chance to get a tan without lines and broaden your horizons. And if things get dull you can always go stand by the running trail and watch confused joggers realize what they’ve just stumbled into. 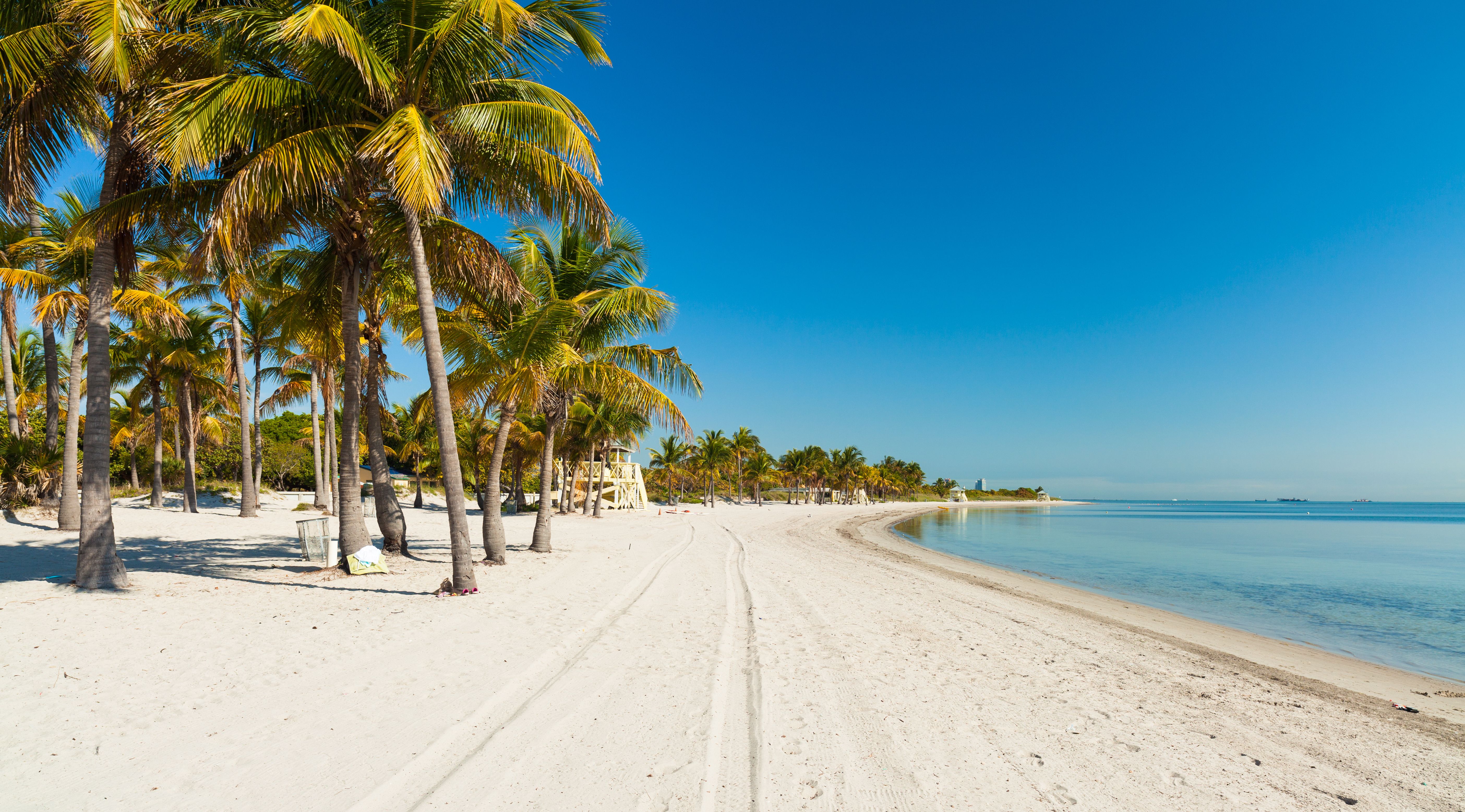 Crandon Park — Just across the Rickenbacker Causeway from downtown Miami sits the island paradise of Key Biscayne, which, while not an actual Florida Key, is still a serene escape from the city. It’s also home to Miami’s best beaches at Crandon Park, where powdery white sand sits up against shallow, turquoise water as green palm trees line the sand. The beaches at Crandon Park are popular for big family barbecues, and the smell of grilled churrasco and mojo chicken fills the air while kids play fútbol along the shore.

Bill Baggs State Park — At the far end of Key Biscayne, you’ll come to Bill Baggs State Park, a preserved old Florida wilderness with the most isolated beaches in the city. That’s not to say you couldn’t get to a Winn Dixie in five minutes if you needed more beer. But the narrow beaches at Bill Baggs are situated away from the city, meaning your only views are out to the expansive Biscayne Bay and funky historic Stiltsville. The park is also home to the Cape Florida Lighthouse, which dates back to 1825 and offers spectacular views from the top. For lunch, grab a sandwich at Boater’s Grill, which feels a little like an old pirate’s cove hidden along a canal just inside the park. 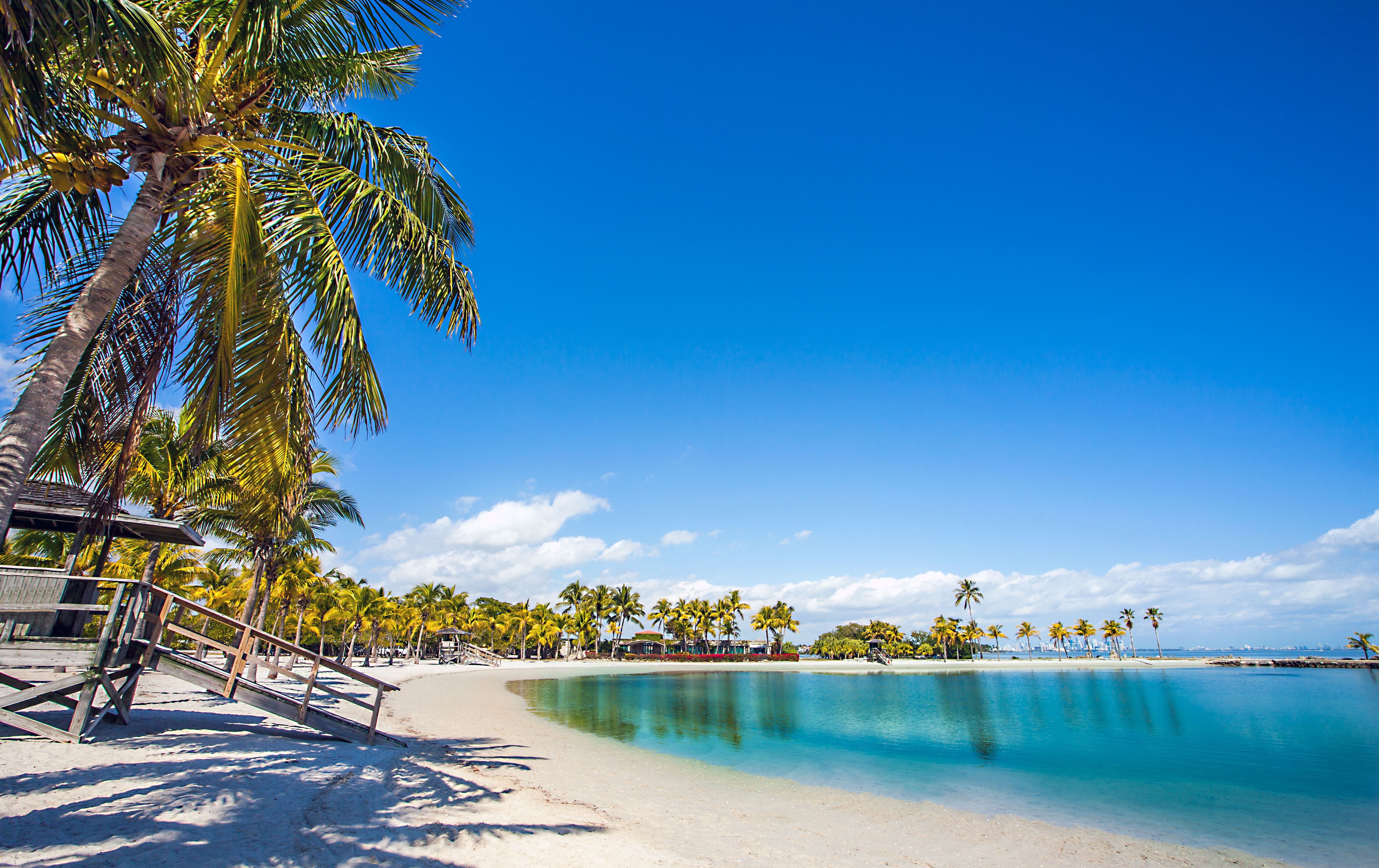 Matheson Hammock Park — Locals don’t like to tell people about Matheson Hammock, a swampy, palmetto-filled, waterside tropical hideaway just south of Coral Gables on Old Cutler Road. The beach is relatively isolated, and even on weekends this little cove never gets overrun with people. It has a natural atoll pool, constantly refreshed with water from Biscayne Bay and perfect for beginning swimmers. The park is also popular with kiteboarders, as the windy coastline and shallow water create the perfect environment for boarders of any level.

Amelia Earhart Park — The gritty, industrial, Miami suburb of Hialeah gets kind of a bad rap. But one of the hidden gems of the City of Progress is Amelia Earhart Park, which boasts five lakes, bike trails, and a disc golf course. It’s also home to the Miami Watersports Complex, a water ski cable park set on a 90-acre lake that also has a Super Air Nautique G23 for guests to ski behind. For those looking to water ski or wakeboard in Miami and don’t want to rent a boat for the afternoon, this park is your ideal destination. 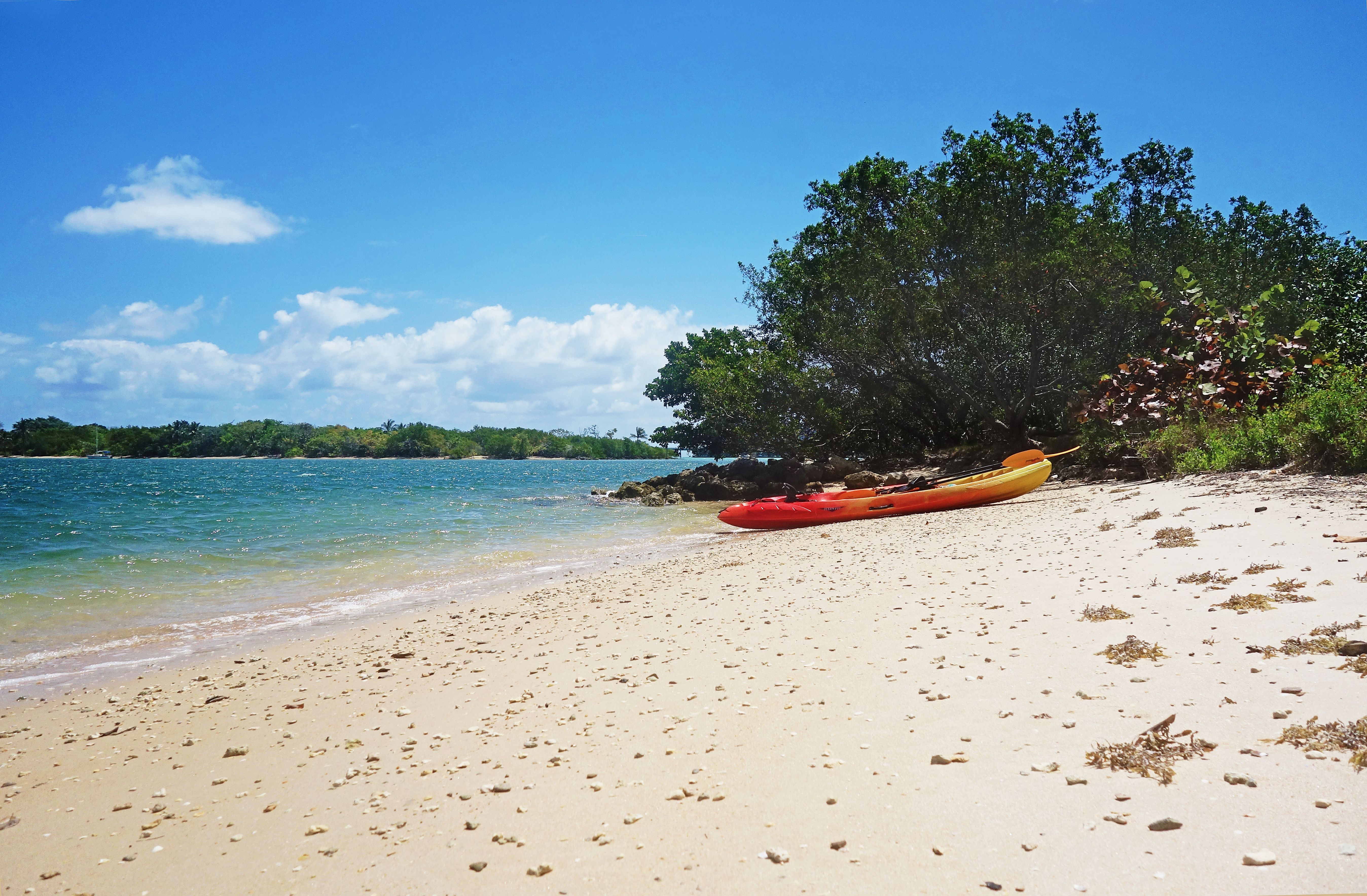 Oleta River State Recreation Area — Between Interstate 95 and the beach along NE 163rd Street, there’s a stretch of mangrove lining the south side of the street. This is the Oleta River State Recreation Area, the only patch of untouched wilderness in highly-urbanized Miami. Inside the park, you’ll find eight miles of mountain bike trails. While not technically going through any mountains, the trails are still a challenging way to navigate the park. You can also rent a kayak and paddle through mangrove canopies, emerging from the Florida of yesteryear onto Biscayne Bay lined with high-rise condos. Oleta River also has several beaches only accessible by boat, which make for a pleasant, less-crowded alternative to Miami’s bigger beaches.

Jose Marti Park — Miami might have one of the most grossly underutilized riverfronts in America, but the best place to get out and enjoy it is at Jose Marti Park just west of downtown. Though it’s not the greenest park you’ll ever visit, it does have a full lap pool open to the public, and a state-of-the-art indoor fitness center you can visit for $3 a day. For downtown visitors who don’t have a gym in their hotel, or have a gym that’s lacking, the Jose Marti gym is the best deal in town.