On a map of the Caribbean, St. Kitts is hardly bigger than a speck. The dual-island nation of St. Kitts and Nevis covers slightly more than 100 square miles between the Atlantic Ocean and the Caribbean Sea, with St. Kitts comprising roughly 70 percent of the country’s total area.

While Nevis is known as an island of leisure, St. Kitts is living proof that big things come in small packages. Relaxing as it can be, it’s also an island that runs on adrenaline, with an inexhaustible list of outdoor activities to keep energetic travelers, well, exhausted.

If your dream Caribbean getaway involves scaling volcanoes, ziplining over the rainforest, and trying every water sport imaginable, these are the most exhilarating things to do in St. Kitts for adventure-seekers. 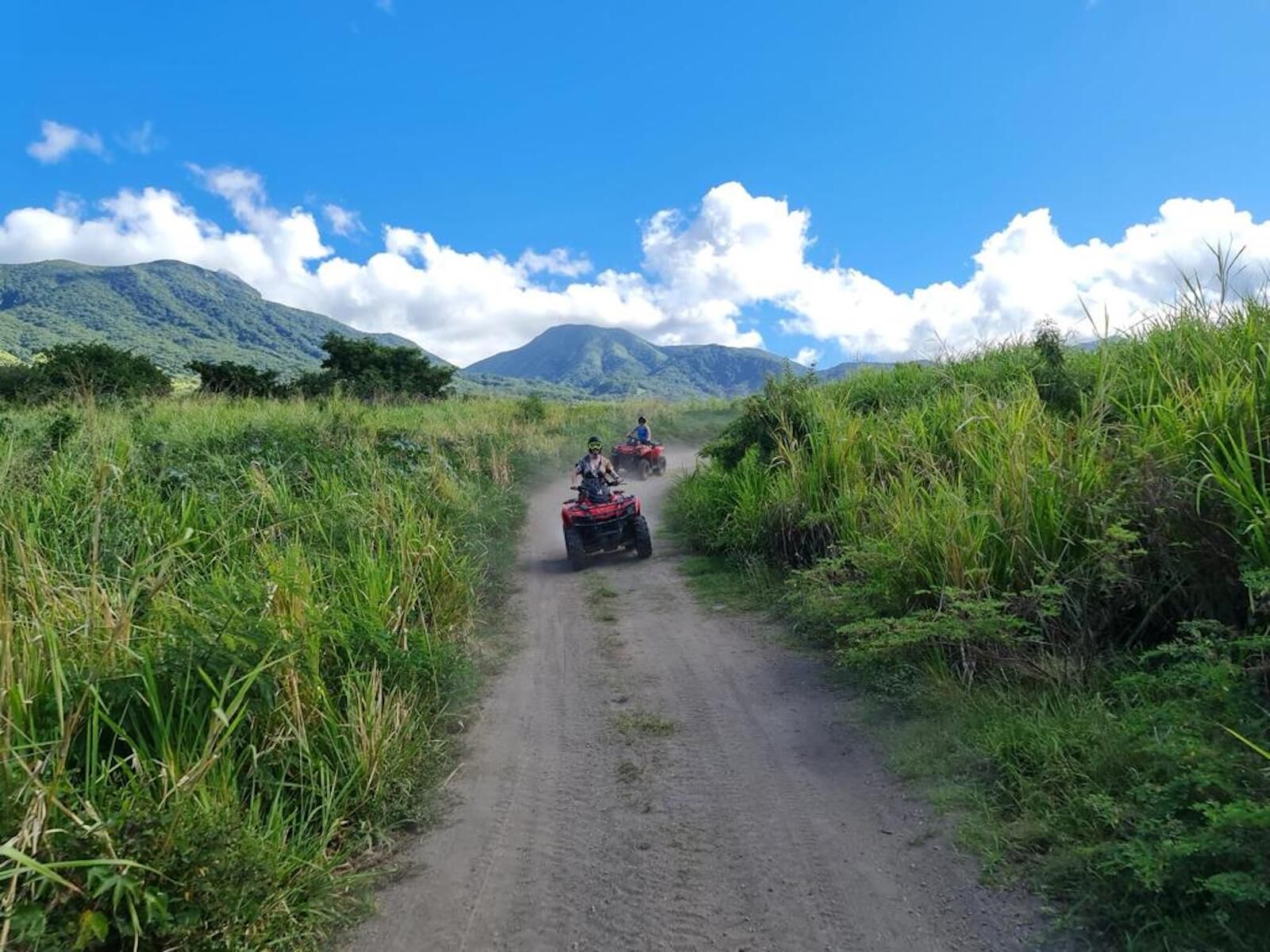 A historical tour of St. Kitts is the perfect way to get acquainted with the “Mother Colony of the West Indies,” so named for being home to the first British and French settlements in the Caribbean. These tours largely revolve around old forts, such as the UNESCO-listed Brimstone Hill, and estates associated with the island’s former sugar production.

In St. Kitts, there’s no rule that says historical tours have to be stuffy, and Spectrum ATV Tours proves that. Excursions depart opposite the island’s first sugar plantation, Wingfield Estate, once owned by Thomas Jefferson’s great-great-great-grandfather. From there, riders cruise down sugar cane paths, past plantation ruins, and through lush greenery for 90 minutes, with guides pulling over periodically to share details about the island’s heritage and ecology. It’s one of the most fun things to do in St. Kitts if you like history and adventure. The tour doesn’t go as far as the historic Brimstone Hill, arguably the island’s most significant historical site, but it’s just 10 minutes up the coast by car.

Before you leave Old Road Town, pop by Wingfield Estate, home of the Old Road Rum Company, to see Amerinidian petroglyphs, antique machinery including a rare water-powered sugar mill, and heritage crops like tobacco and indigo growing in the planters. And, of course, settle in for a tasting while you’re there. Though today’s Old Road Rum distillery is relatively new — and undergoing a redesign for the Instagram era — rum was first produced on site since 1681, making it the oldest operational rum distillery in the Caribbean.

Climb one of the tallest peaks in the Caribbean 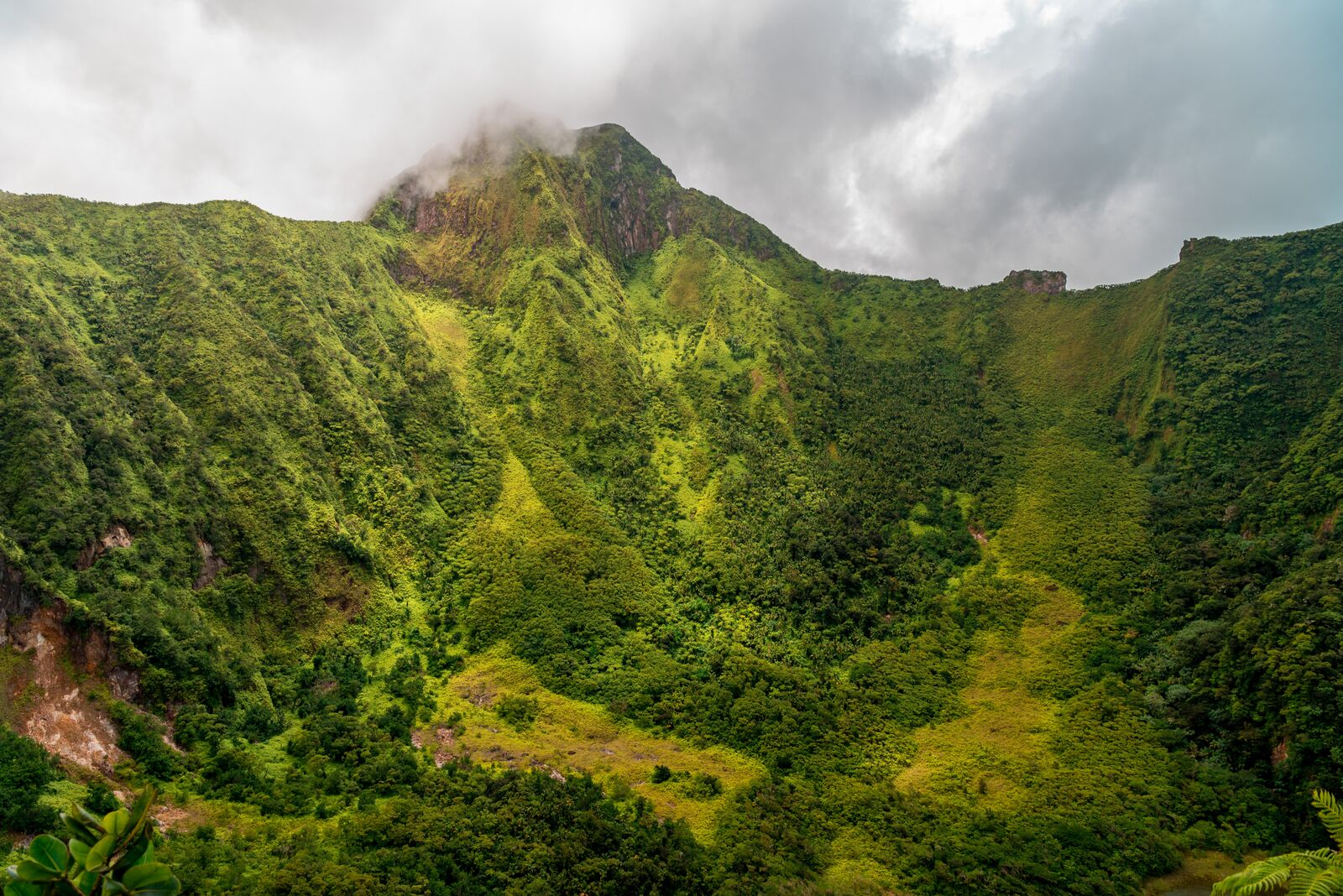 St. Kitts is a volcanic island with four volcanos, three of which are extinct. The fourth, Mt. Liamuiga, sits smack in the center of the island’s northern half. At nearly 3,800 feet, it’s the highest point in St. Kitts and one of the tallest peaks in the entire Caribbean.

Nearly every Kittian I asked about climbing Mt. Liamuiga admitted to doing it exactly once. The trek to the top is one of the most formidable physical challenges you can tackle on the island. The rainforested trail is covered in roots and generally muddy, with a steep incline in the last quarter that demands the use of all four limbs. But the panorama from the crater rim is worth the effort to get there, even on days when the view is shrouded in clouds or mist.

My hiking group, led by the knowledgable and affable O’Neil of O’Neil’s Rainforest Tours, was of mixed experience. Our trip took roughly four hours round-trip with a steady, gentle pace. Back at the base, the feedback from the group was accordingly mixed. Some, like the majority of the Kittians I met, declared the hike an unforgettable excursion that they’d never do again. The more experienced hikers generally thought it was a pleasant mix of exertion and reward and said they’d highly recommend it as one of the best outdoor things to do in St. Kitts.

Evaluating the difficulty of any hike is subjective, but with the proper gear and a can-summit attitude, the hike is doable for most moderately athletic travelers. Just bring lots of water, energy-rich snacks, sturdy shoes, and hiking poles if you like to use them — and budget at least a half-day for the excursion. To round out the day’s activities, visit nearby Black Rocks to see where the Atlantic meets the Caribbean and striking rock formations created by Mt. Liamuiga’s lava flow. After, grab a post-hike bite at Arthur’s on black-sand Dieppe Bay.

Level up on the Dos d’Anse Pond hike 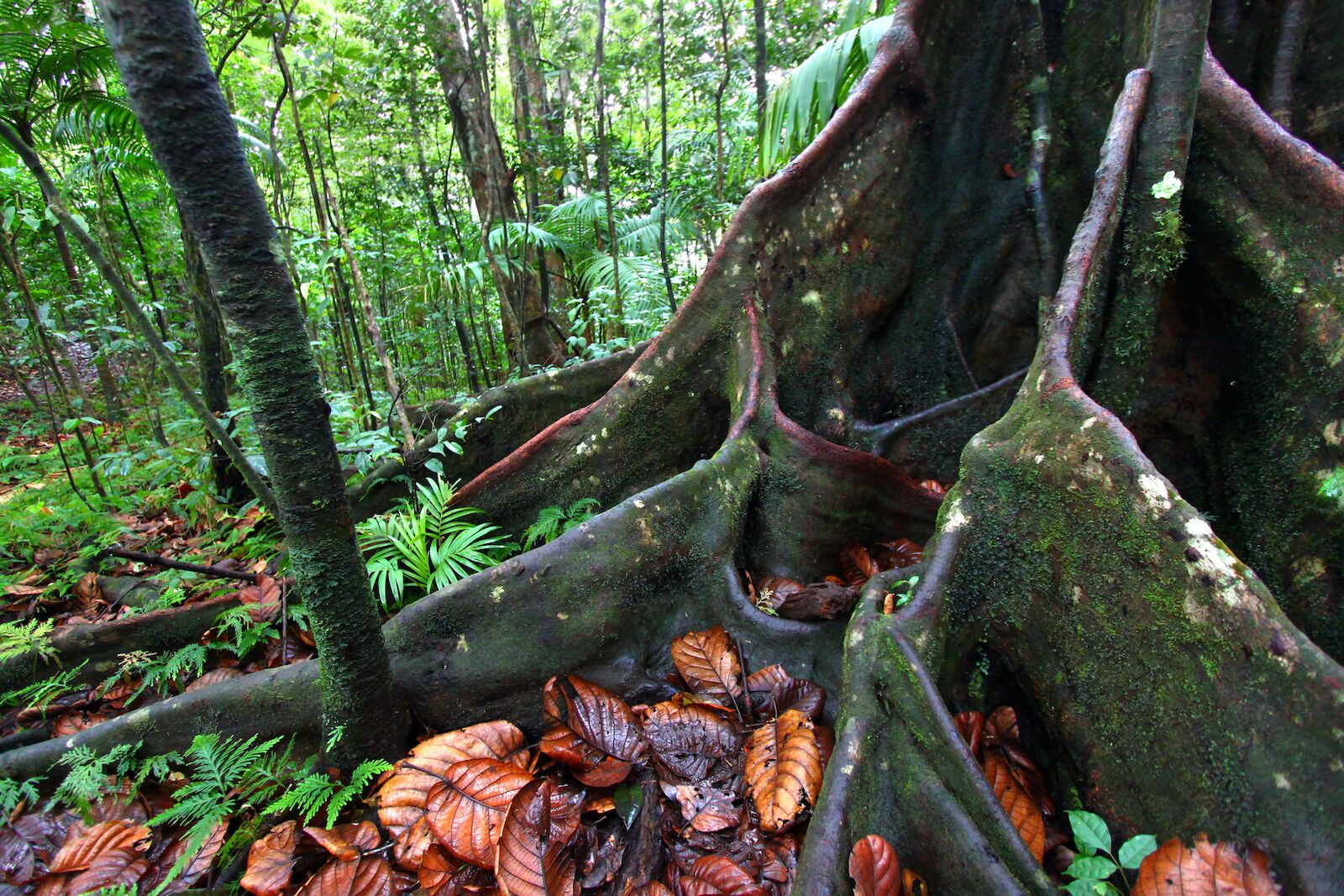 A few hours after summiting Mt. Liamuiga, I learned that there’s an even harder hike on St. Kitts: Dos d’Anse Pond. Though the pond sits almost 1,000 feet below Mt. Liamuiga’s tallest point, the elevation gain is comparable to the volcano hike, covering around 2,300 feet over roughly four miles. What makes the hike to Dos d’Anse Pond one of the hardest things to do in St. Kitts is the rugged, overgrown terrain paired with a consistently steep grade, notably the 900-foot gutter climb toward the top. What makes it so special are the water features at the end, both the pond itself and the falls that flow into it.

Though I didn’t make the trip, I have it on good authority that the Dos d’Anse Pond is a trek best left to the intrepid — most of the Kittians I talked to were wary of attempting it. Granted, as an avid hiker, I found Mt. Liamuiga to be more accessible than advertised, so take the cautionary tales you’ll hear with a grain of salt.

If you’re up for the challenge, the Dos d’Anse Pond trailhead is in Old Road Town near Caribelle Batik, where the Rainforest Bar’s signature Jefferson rum punches await.

Get on the water on Cockleshell Bay 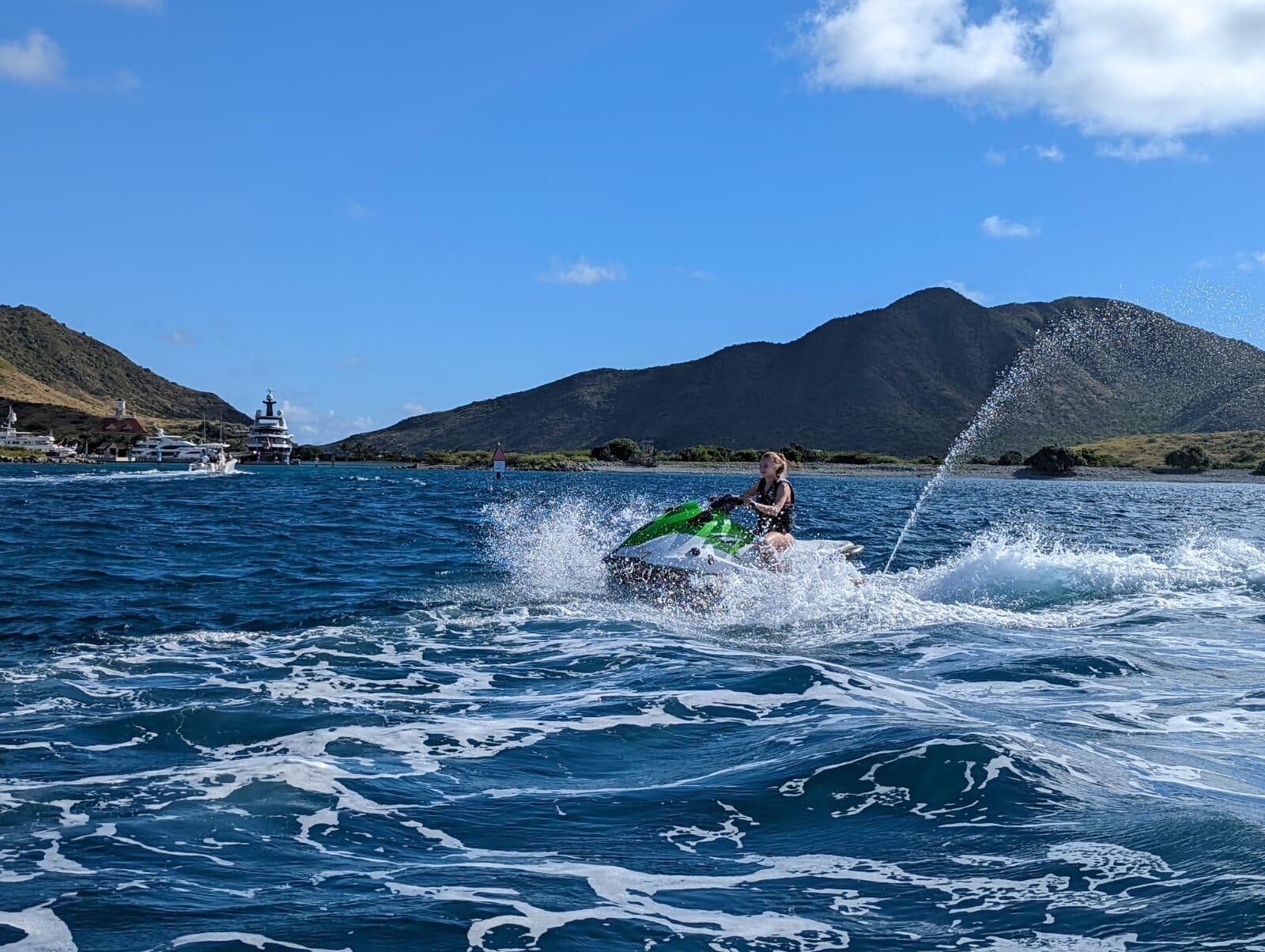 Days spent on the water in St. Kitts take many forms — as does the gear you’ll need to make them happen. You might find yourself on a jet ski or water skis; in a kayak, glass-bottomed or otherwise; on a surfboard, paddleboard, wakeboard, kiteboard, or flyboard; strapping into a parasailing harness; or relaxing on a simple sailboat. St. Kitts Water Sports at Cockleshell Bay is your one-stop-shop for all of the above.

I did a combination jet ski and snorkel excursion one morning, which took me to Shitten Bay, a popular snorkeling spot with a reef and small wreck on the island’s southern tip. That afternoon, I took my first-ever kiteboarding lesson with the shop’s owner, Jeff Andrade, who once competed at the professional level. The lesson was on nearby Turtle Beach, whose crosswinds, calm waters, and minimal crowds make it ideal for beginners. Anyone eager to get into kiteboarding should put it at the top of their list of things to do in St. Kitts and dedicate at least three days to lessons, says Andrade. It can be hard to even stand on the board on your first day.

Regardless of which water sport you choose, be sure to walk along the beach to the Spice Mill restaurant after you’ve returned your equipment. It may not be super outdoorsy, but refueling on the restaurant’s fantastic conch fritters and washing them down with house-made hibiscus rum is one of the best things to do in St. Kitts come late afternoon.

Dive on a shipwreck or reef 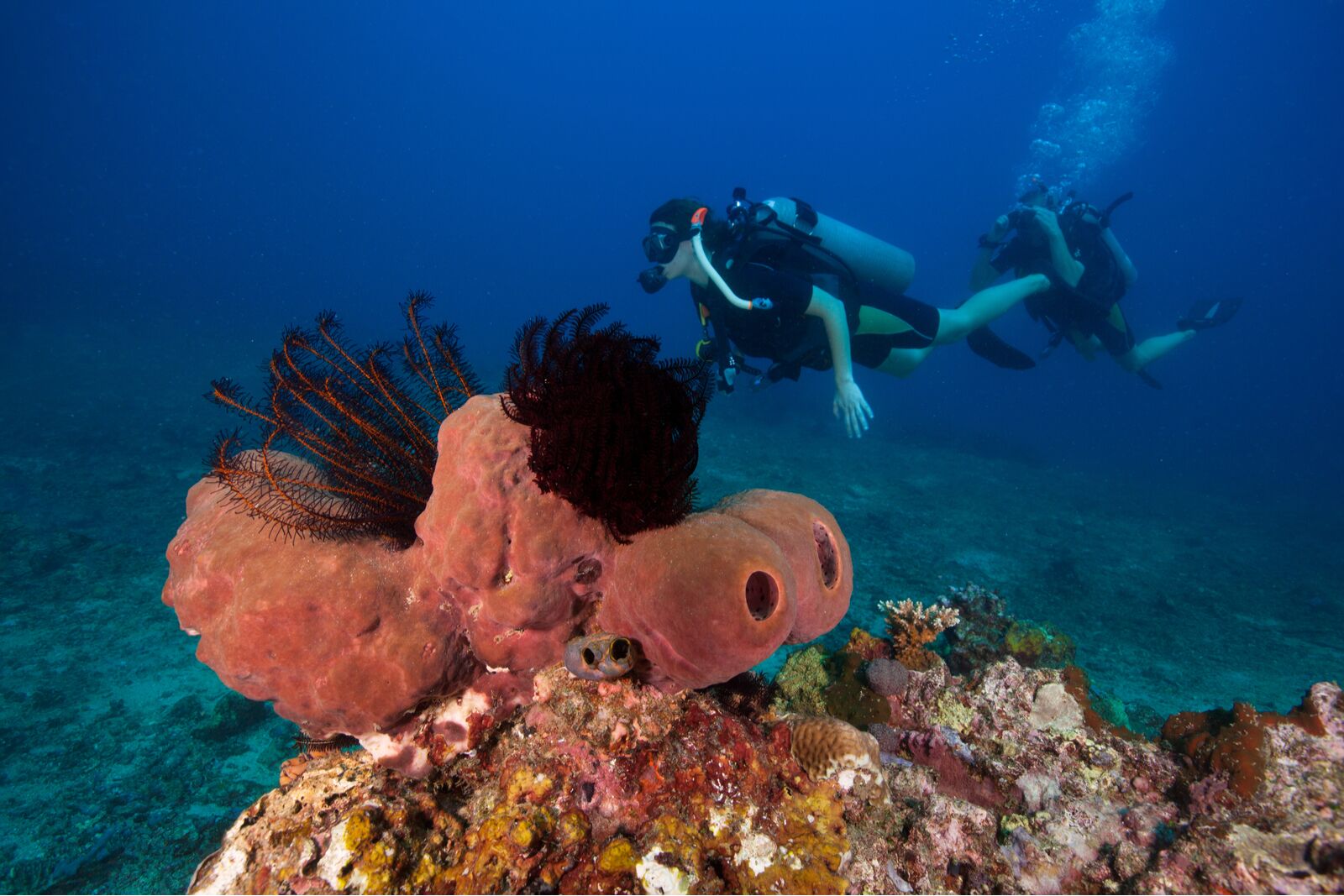 Off the shore of Frigate Bay, which is famous for its beach bars that are collectively known as The Strip, there’s a 144-foot-long cargo ship sitting in two pieces on the ocean floor about 40 feet below the surface. It’s called the River Taw, and it’s come to be regarded as one of the best wreck dives in the Caribbean, in large part due to its accessibility. It’s a shallow dive for beginners, and the ship’s swim-throughs are wide and easy to navigate. Inside, it’s easy to spot creatures like octopuses, sea turtles, and stingrays in the crevices of the hull.

The River Taw is one of many dive sites in St. Kitts. The most popular reefs and wrecks sprawl across the island’s Caribbean side, which generally has fewer swells and calmer water. Divers also favor the strait that separates St. Kitts from Nevis, called The Narrows, which is an important breeding ground for conch. Newly certified divers will feel at ease in Friars Bay Reef, home to juvenile angelfish, moray eels, and massive lobsters. More advanced divers might prefer drift diving farther offshore at Monkey Shoals or night diving at Turtle Bar Reef.

For deeper dives, head to Sandy Point Marine Park offshore of Brimstone Hill, where sites range from 50 to 130 feet deep. The corals are large, exceptionally healthy, and sculpturesque, forming dramatic swim-through canyons where you may see barracuda, eels, and turtles. Sandy Point’s currents can be unpredictable, as can the visibility, but both Pro Divers and Kenneth’s Dive Center host excursions there on calm days.

Soar over the jungle canopy 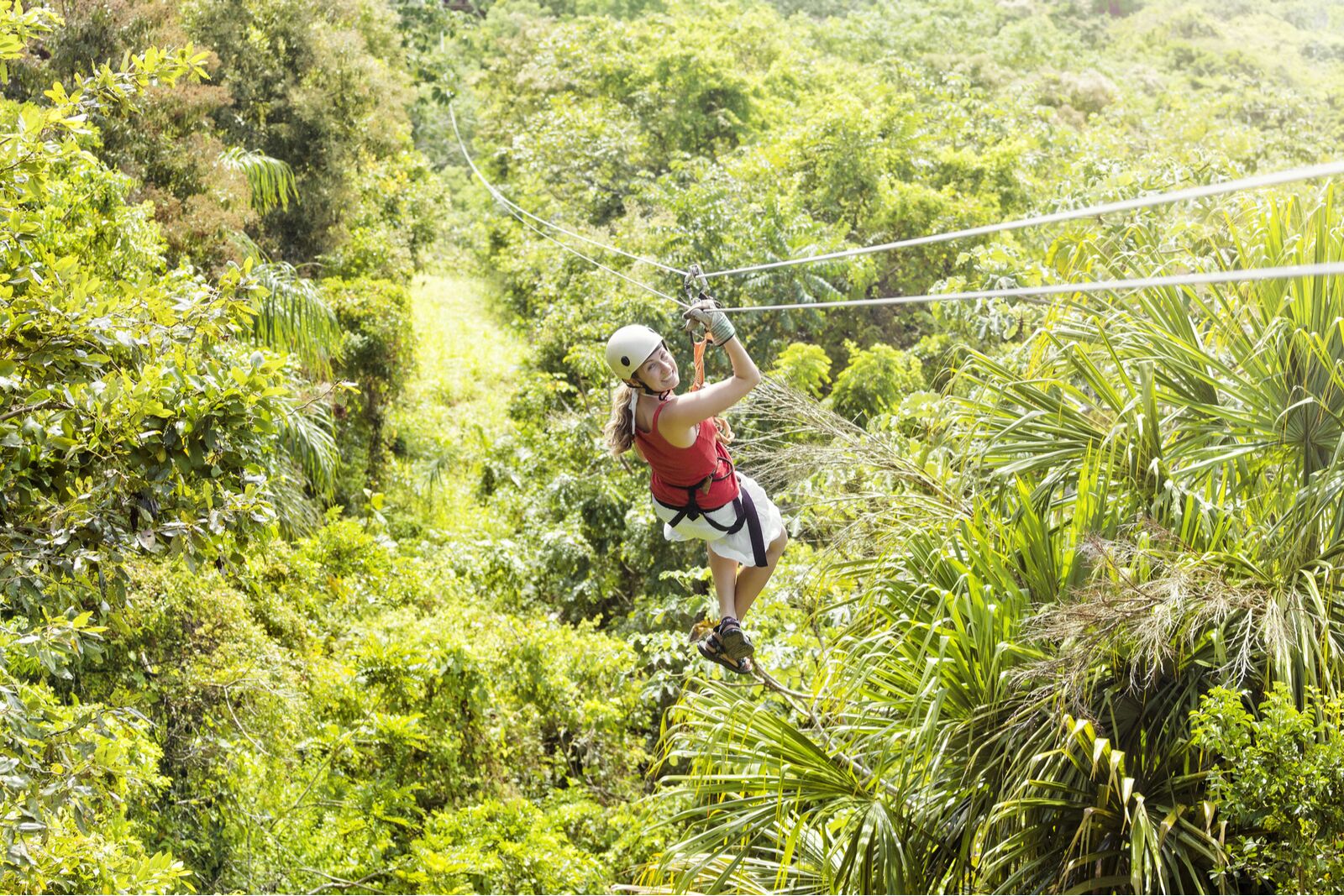 Adventure travel can mean different things. For some, it’s about outdoor immersion; for others, it’s all about adrenaline. Sky Safari Tours splits the difference with its zipline tour of St. Kitts, one of the most popular things to do in St. Kitts for groups of various fitness levels.

Riders can choose between five cable lines, the longest of which spans more than 1,350 feet and reaches a maximum height of 250 feet above the rainforest canopy. Depending on the rider, you could go up to 50 miles per hours — nearly as fast as the speed limit on East Coast highways. A full zipline tour lasts two to three hours, including a pick-up in the capital city of Basseterre, a shuttle to the operator’s base at Wingfield Estate, and a comprehensive safety orientation.

TravelThe Best Island in the Caribbean for Every Type of Traveler
Tagged
Beaches and Islands Outdoor
What did you think of this story?
Meh
Good
Awesome