It doesn’t take a surfer to know what makes a great surf spot. Wide, palm-fringed beaches with endless tunnels of peeling waves probably come to mind. Landlocked destinations likely do not. Enter river surfing. Riding river swells may not be the same as hanging ten in the tropics, but the appeal is obvious for wave chasers: River surfing is challenging, exciting, and often a little dangerous. Rides can last as long as surfers are able to balance, and they’re doable with no palm-fringed beach in sight. If you’re still not sold on the idea of ocean-less surfing, these eight epic river surfing destinations are guaranteed to get you on board. Maybe even literally. 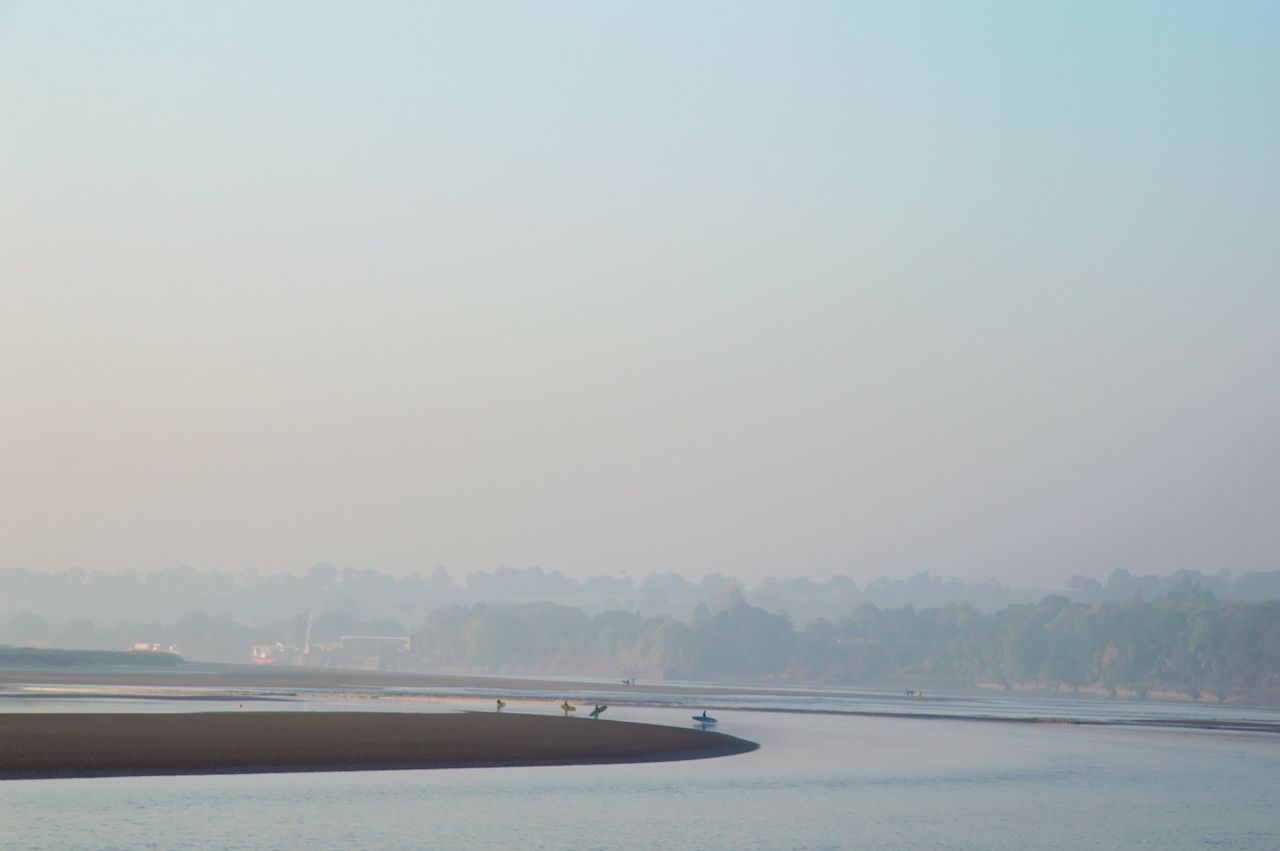 Some trace river surfing’s origins back to the River Severn, where this tidal bore is said to have seen its first surfer in 1955. Tidal bores occur near the coast when a strong tide forms a wave by flowing against the current. Now a go-to for competitive surfers, the Severn Bore has been the backdrop for record-breaking wave rides. The name most famously associated with the bore is Dave Lawson, a Gloucester-born surfer who rode its wave for upward of 40 minutes and 5.7 miles. To date, the Severn Bore is one of the top three surfable bores anywhere in the world. 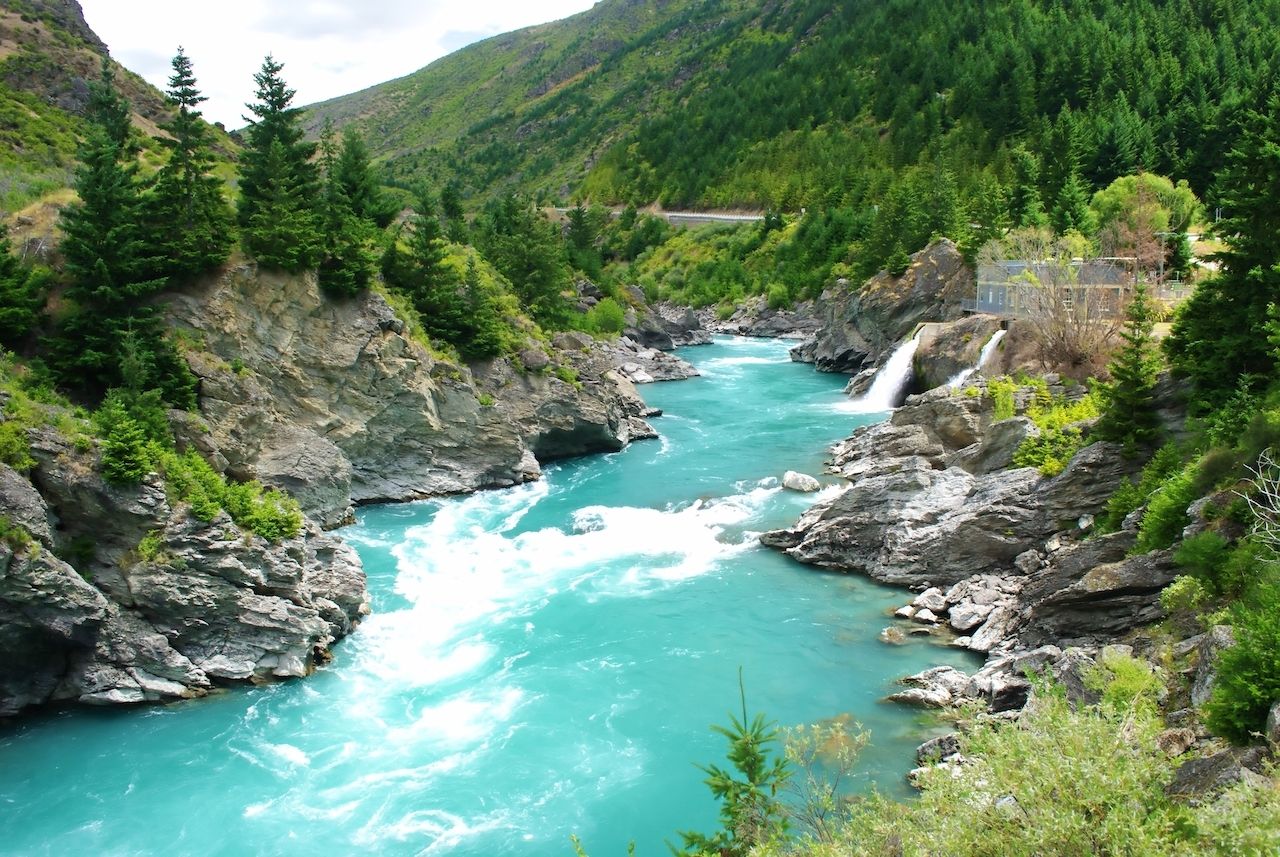 Rumor may have it that river surfing was born in England, but it was brought to the masses in Queenstown, New Zealand’s adventure capital. Adventure king Jon Imhoof pioneered the world’s first commercial river-surfing outfit on the Kawarau River in 1989. Now, river surfers and bodyboarders can ride standing waves created by Class II and III rapids. Surfers should hit the river during New Zealand’s summer months, from November to March, but riverboarders can still enjoy the thrill in late October and early April all done up in wetsuits. 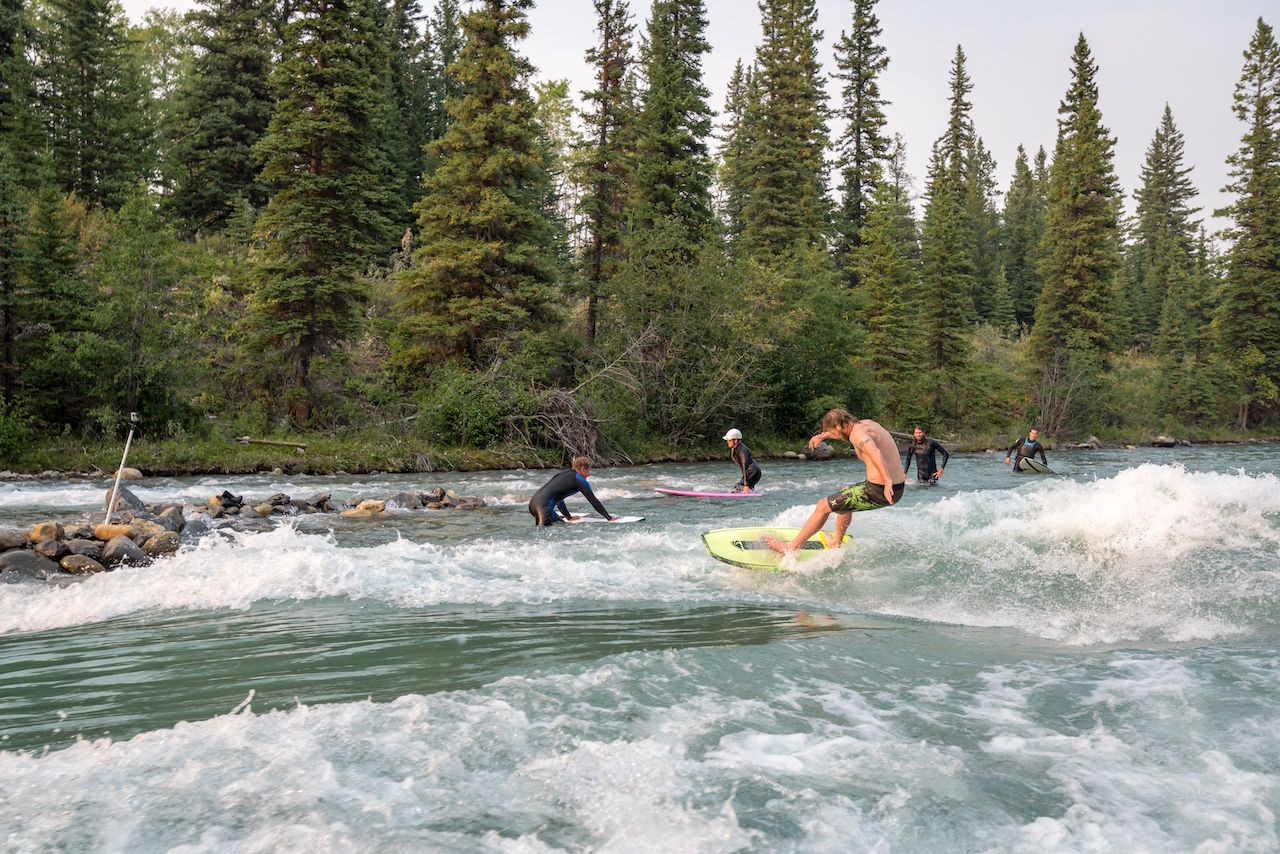 About 45 minutes outside of Calgary in Canada’s Alberta province is the Mountain Wave, a renowned river surfing spot in Kananaskis Provincial Park. It’s the most challenging and best known of Alberta’s waves given its swiftness and shallowness, though there are also options for beginner and intermediate surfers in and around Calgary. Beginners can lug their boards to 10th Street in the city, while semi-skilled surfers can try their luck on the river’s Santa Claus rapids. 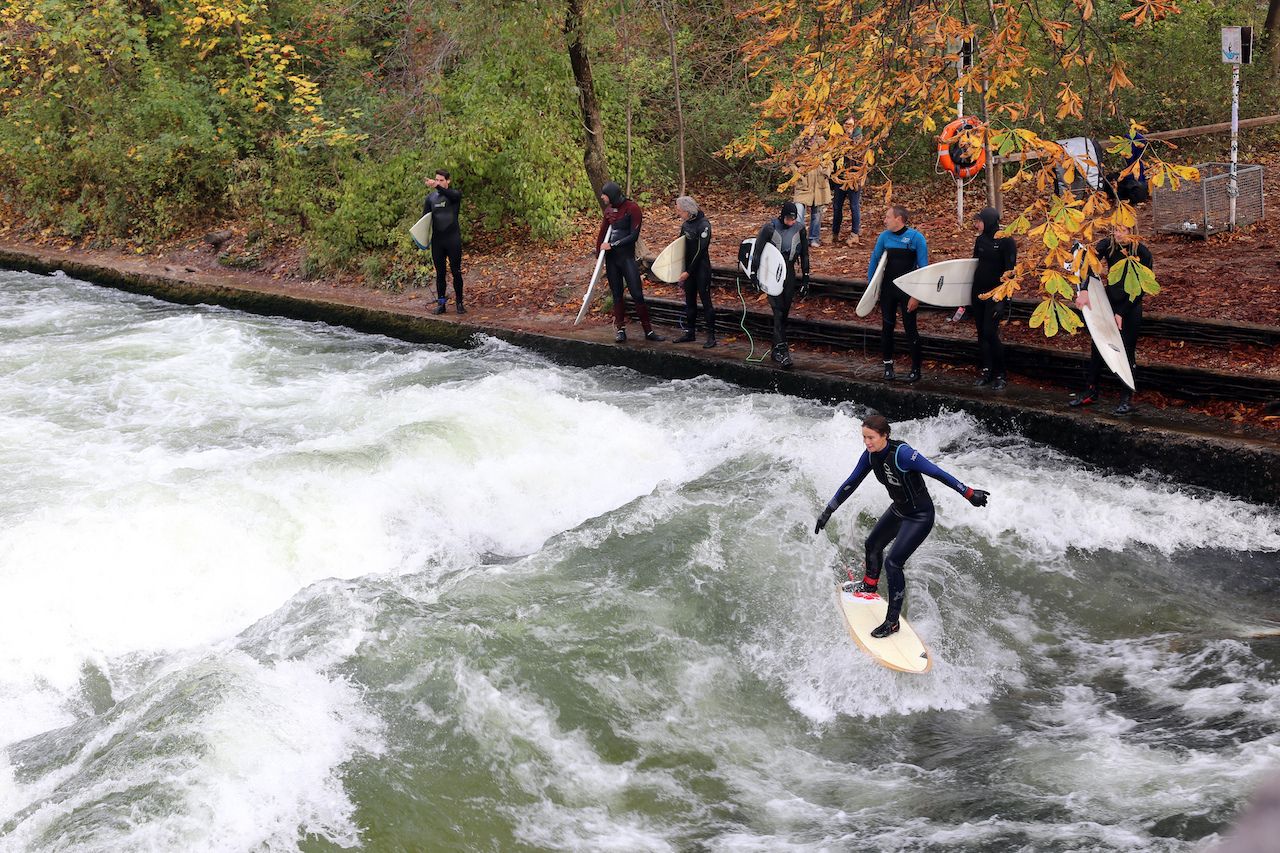 Most major European cities have art museums. Few are mere feet away from a popular surf spot, particularly when those museums tout riverside locations. Arguably the biggest and best-known river-surfing destination in the world today is Munich’s Eisbach River, which has played host to wetsuit-clad surfers a stone’s throw from the Haus der Kunst museum for decades. Onlookers gather at the entrance to Englischer Garten as experts, including pros like Garrett McNamara, ride the river’s wild waves year-round. 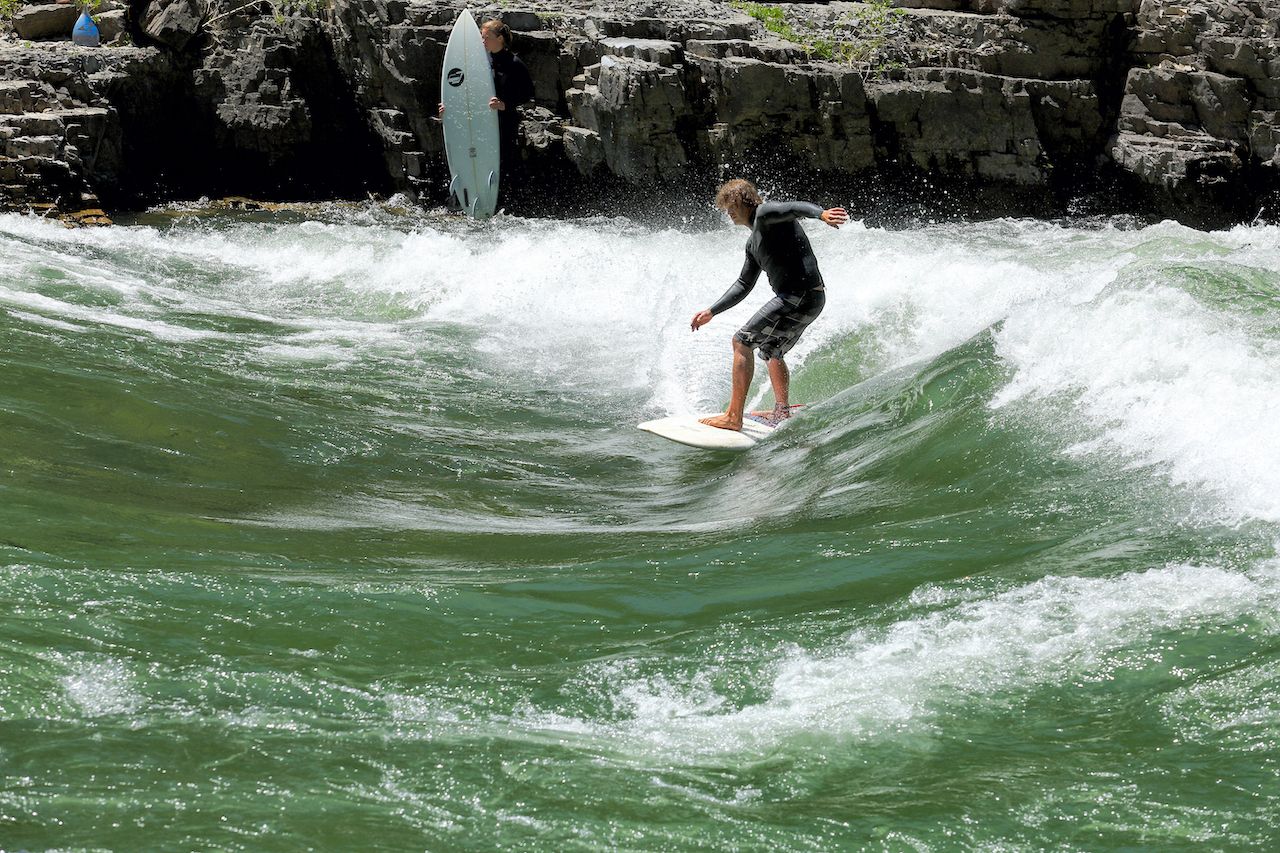 Wyoming’s Snake River is no stranger to outdoor enthusiasts. Even surfers. The river’s legendary Lunch Counter rapid creates the perfect opportunity to take a surfboard for a spin on Class III whitewater. It’s no easy feat, but surfers have been known to ride a wave for 20 minutes or more, longer than they’d get in the ocean. Granted, they’ll feel like they’re staying in place while the rapid churns beneath their boards, and they’ll be sharing the whitewater with kayakers and rafters. Peak time to attempt Lunch Counter yourself is between May and August.

Springtime in Brazil means good news for Amazon River surfers. Pororoca is a tidal bore that flows upriver up to 15 miles an hour and reaches heights of up to 12 feet. It’s been a hit with surfers ever since a 1999 competition brought its first group of annual competitors to São Domingos do Capim in the Pará state of northern Brazil. Today, the bore’s wave is known for being virtually limitless, with surfers managing to ride it for more than 30 minutes. 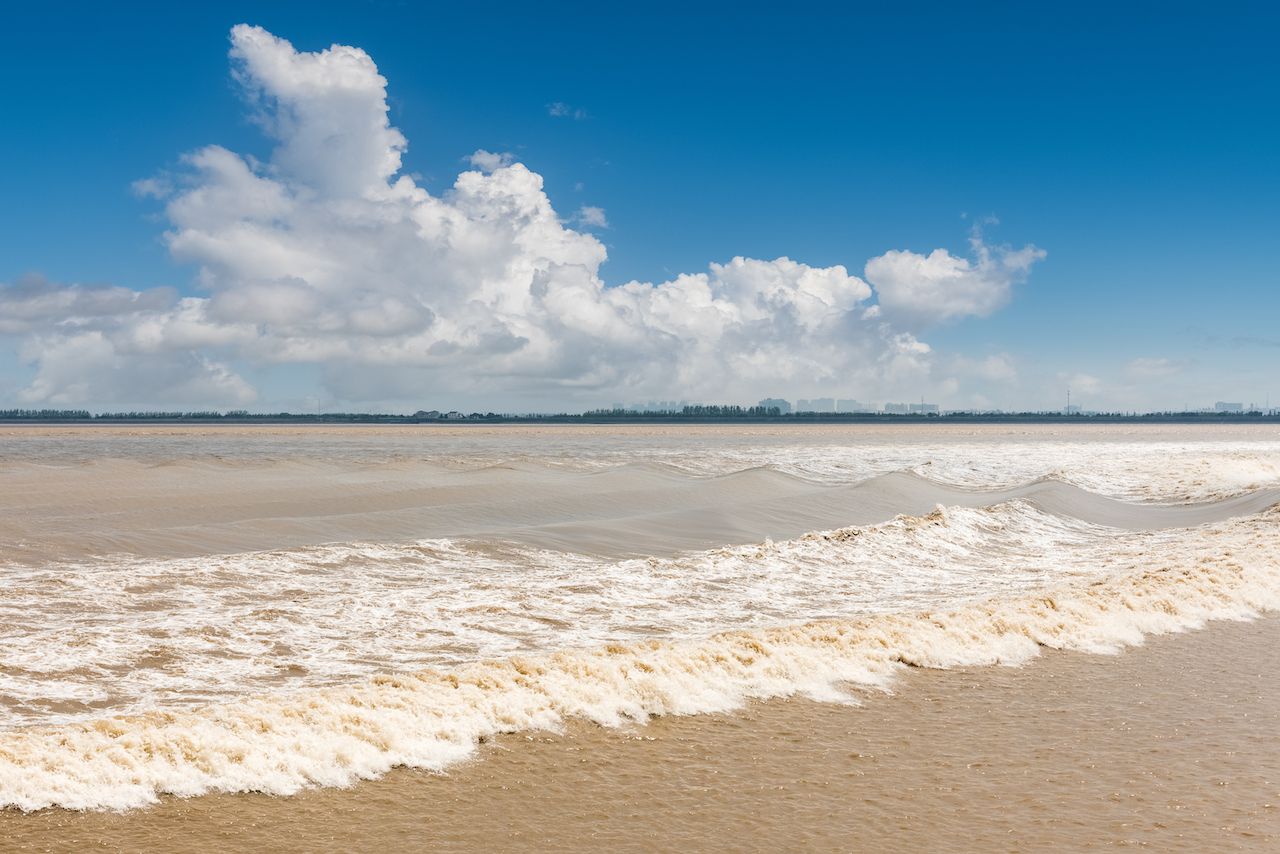 The Qiantang River, which empties into the East China Sea, plays host to the largest tidal bore in the world. Reaching heights as high as 30 feet, the bore has earned itself the nickname Silver Dragon and worked its way onto the bucket lists of fearless surfers. Red Bull has been hosting Qiantang Shoot Out competitions there since 2013, drawing countless professionals to the site. 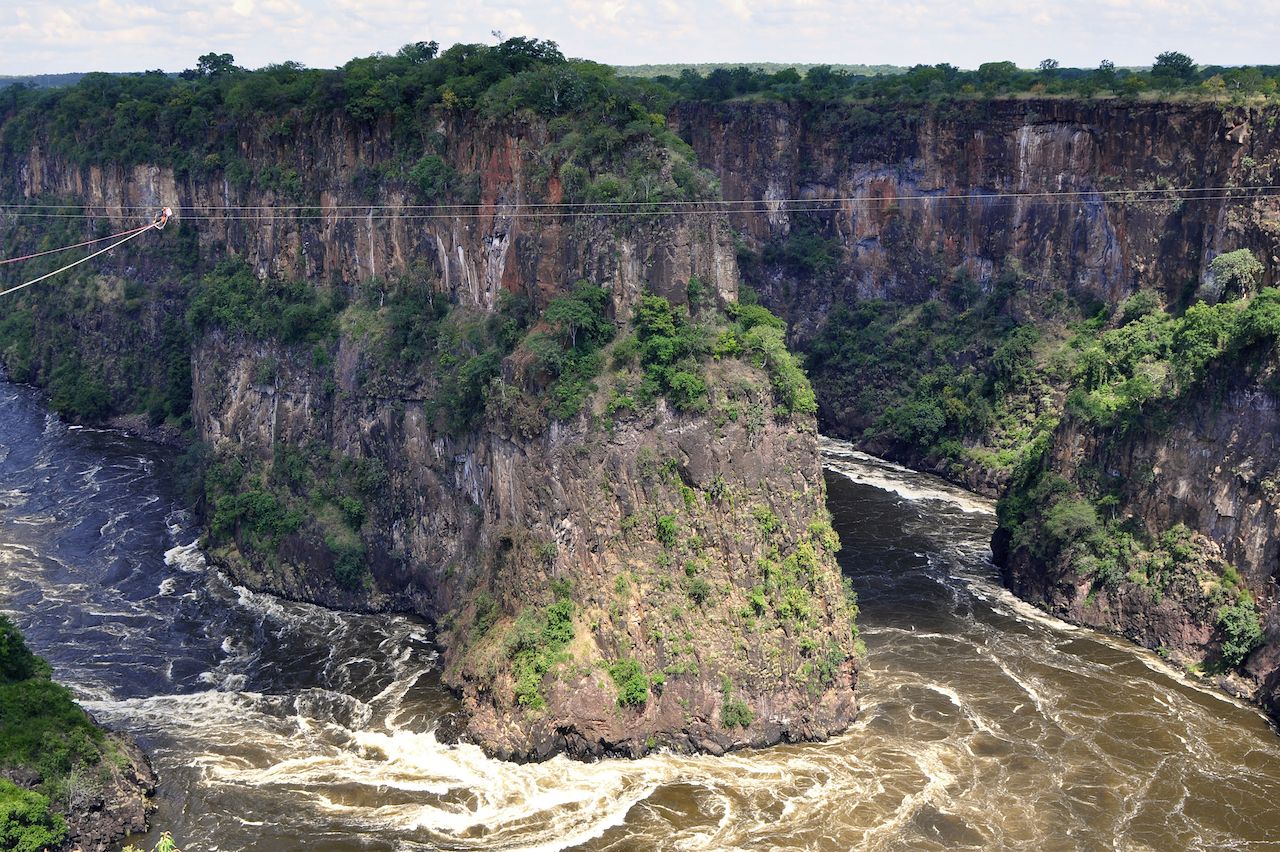 In travel circles, the Zambezi River lands on southern African itineraries as the home of Victoria Falls, one of the most formidable waterfalls on Earth. In water sports circles, it’s the Zambezi’s standing waves that surfers are after. Rapid 11 is the hot spot owing to the wave’s fast current, ample whitewater, steep face, and tight tube. There are two main surfing seasons on the Zambezi: July, when the water level drops, and late January, when it starts to pick up again — both of which create a roughly two-week sweet spot complete with an unforgettable barrel.

SurfingRaglan, New Zealand, Is the Coolest Surf Town You’ve Never Heard Of
Tagged
Outdoor
What did you think of this story?
Meh
Good
Awesome